I grew up 45 minutes outside Manhattan (yes, a true Jersey girl, from the land of Taylor Ham sandwiches and great diner food). Where I come from the cheesecake is dense, creamy, and tangy with a bit of sour cream, riding on a shortbread cookie-style crust. I still remember the incredible silkiness of the cheesecake Mrs. Weimann brought down to the beach where I was working as a lifeguard one day, just to give us a treat. And what a treat it was.

It’s funny, since we’ve been polishing up the recipes section of our website, to discover some of the things that haven’t been on it. We’ve had some gaps to address, and this bad boy is one of them. There’s really nothing hard about making a cheesecake, but there are some subtle points that can make a very big difference in the quality of the outcome. Here’s how to arrive at an eye-closing, head-tilted back, moan-of-pleasure forkful of NY Style Cheesecake.

Before you do anything, take the cream cheese out to warm up. You can leave it on the counter in its packaging overnight, or take the cold cream cheese out of its wrapper and put it in a large bowl to microwave it at low power in 20-second bursts. When you can stir it easily and there are no lumps or cold spots, you’re ready to go. The eggs should be at room temperature, too, but that one’s easy: just put them in a bowl of warm water while you’re wrestling with the cream cheese.

The crust goes together without much fuss. Cream butter and sugar, add flavorings and flour, mix. Now add an egg to bring it all together, and you have dough. 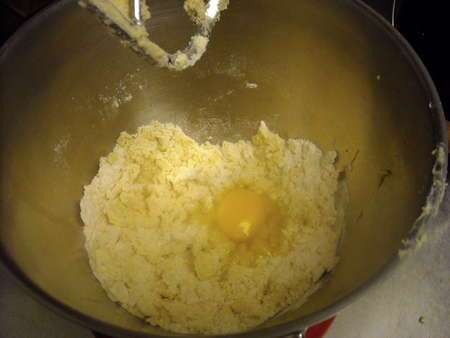 Now plop it in the pan and press it along the bottom and up the sides. To smooth out the bottom I like to use our handy little pastry roller. 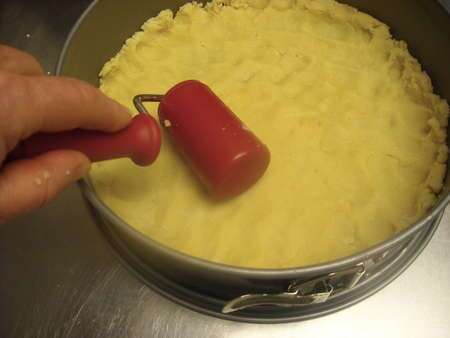 Now dock the dough so steam can escape while the crust bakes (otherwise it will make a big dome). 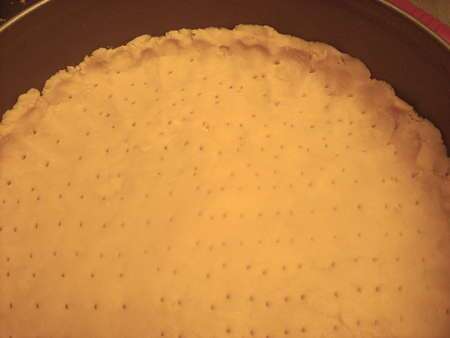 After baking, it’s set and light golden brown. We’ll let it cool while we assemble the filling. Don’t forget to turn the oven down now: the cheesecake will bake at 325°F.

Now for the filling. This is one of those points I was referring to earlier: lumpy cream cheese means lumpy filling, and that’s not what we’re after. Put the softened cream cheese in the mixer with the sugar and flour from the recipe.

Let the mixer run at low speed (you don’t want to beat air into it; you’re just trying to combine everything), until it’s smooth. 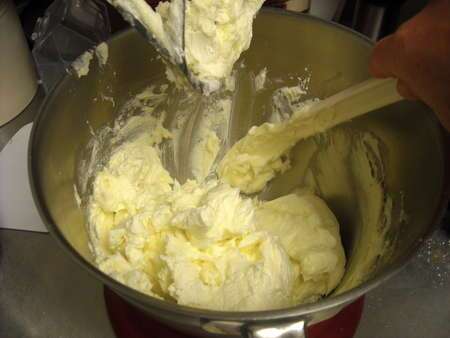 Stop and scrape the bowl to be sure there’s no cream cheese sticking to the bottom or sides, and mix again. This part of the recipe is your best opportunity to get rid of lumps, so be sure you do so now, because after the eggs are in it’s much harder to accomplish.

Everything nice and smooth? Ok, now you can add the vanilla and the eggs, one at a time. Too many eggs at once will make you a big slimy mess that won’t want to mix; you need the traction of the cream cheese mixture’s thickness to help you incorporate the egg. 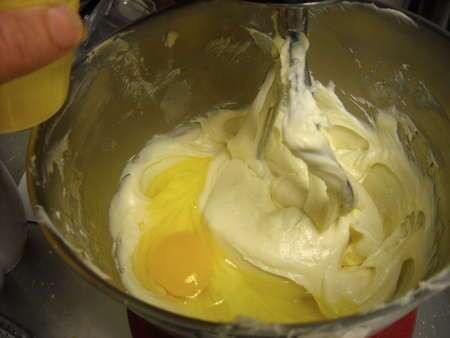 After each egg disappears, scrape the bowl to make sure everything is the same consistency, and you don’t have any thicker batter sticking to the sides and bottom.

Add the lemon zest last, so it doesn’t all get stuck to the paddle. 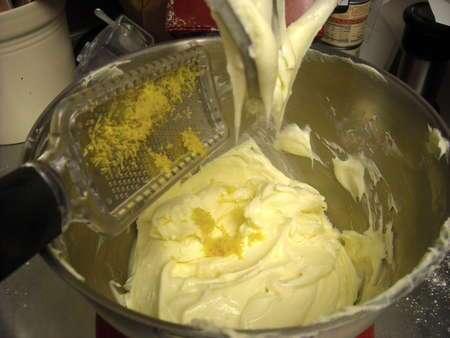 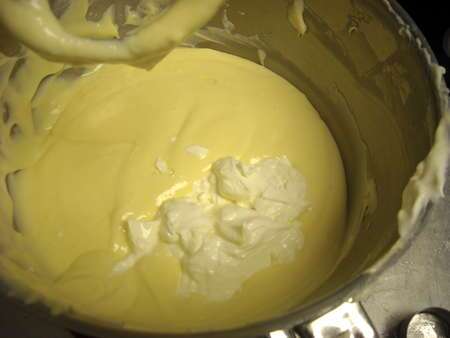 Pour the batter over the crust in the pan. 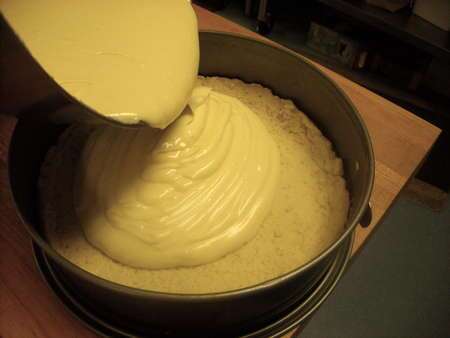 Smooth it out with an offset spatula. 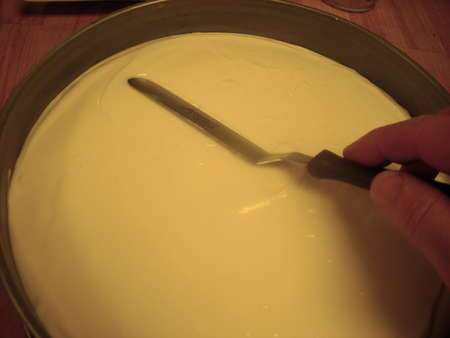 Now for the trickiest part: the bake. I can hear you saying, “Huh? What’s so hard about putting a pan in the oven?” Nothing. What’s hard is knowing when to turn the oven off and let the cake coast across the finish line from the retained heat (it’s called carryover cooking). Since cheesecake has a generous amount of raw eggs in it, people freak out and frequently overcook them. I did.

A little food science here: The protein in eggs begins to coagulate at 140°F for whites, 150°F for yolks. The addition of sugar and other ingredients raises that temperature, but not by much. The more you cook an egg past that temperature, the tighter the proteins become, and the more they shrink. They can contract so much that they squeeze out the liquid they’re supposed to be capturing: that’s why overcooked scrambled eggs begin to weep.

The first cheesecake I made was from a recipe I was adapting; I made a basic testing error, and didn’t set the timer for 10 minutes less than the recipe said to. When I checked the temperature of the cake an inch from the edge, it was 195°F. It was still wobbly in the middle, so I thought I was going to be ok. I propped open the oven door with a potholder, turned the oven off, and set the timer for an hour. 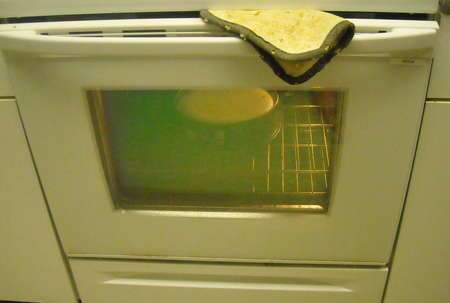 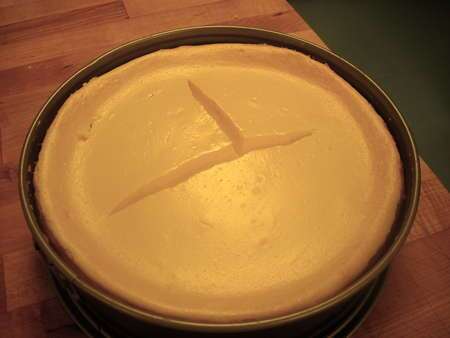 This cracked cake tasted fine, but its texture was a bit grainy and a on the dry side. Time for take two.

Take 2: another cheesecake, but this time I backed off on the bake time. When the batter measured 175°F an inch and a half from the edge, I repeated the coasting process: oven off, door propped open, timer set for 60 minutes. 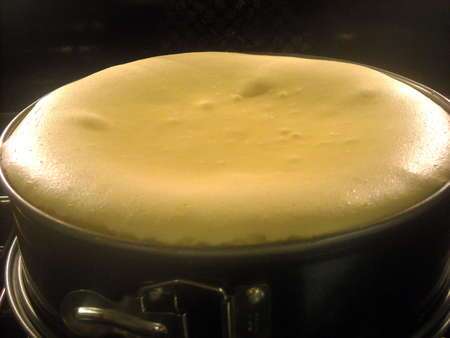 The top seemed awfully juicy (about 3 inches across in the center), but I stuck to my guns, and turned the oven off after propping it open. Here’s the way the cake finished up. 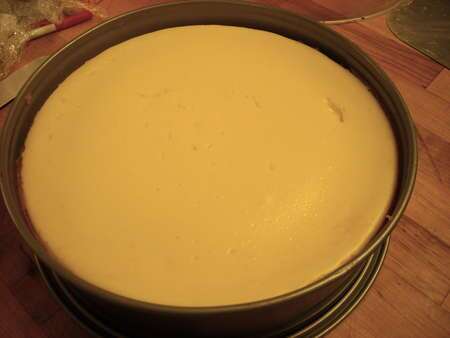 Now that’s more like it! The blemish you see on the right is where I took the cake's temperature, but that will be hidden by the topping. This cheesecake was incredibly silky. Dangerous to the diet, that’s for sure.

Refrigerate the cheesecake while you make the topping. You can use any kind of fruit you like, but tart cherries or fresh strawberries are classic. 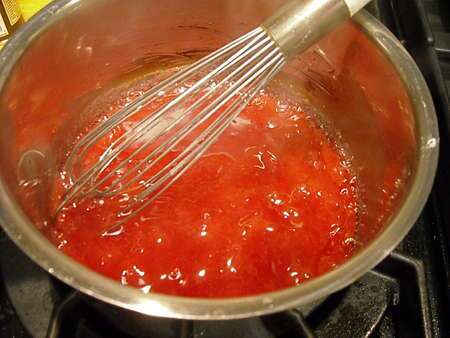 add a few drops of red food coloring (not critical, but it does look better if you do), remove from the heat and stir in the fruit. 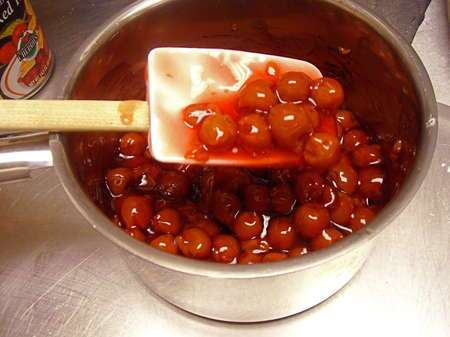 Spoon over the top of the cheesecake, and your creation is ready for prime time.

Try our recipe for NY Cheesecake, and let us know what you think by writing a review or leaving a comment, below.

I have a deep, 9” springform. Cheesecake batter comes to about 1” from top. How much more time do I add to the bake time?

Hi Candace! A cheesecake that tall will take quite a while to bake through. We'd recommend lowering the baking temperature to 300°F and checking the cake after 50 minutes of baking, adding time as needed until it's 175°F in the center. Another option would be to make some little cheesecake cupcakes with some of the filling instead. We hope this can help!

In baking a cheesecake in a convection oven you didn't say how may degrees to reduce the temperature or any reduction in time. I can not turn the fan off in my convection oven. My settings are Broil, Toast, Warm and Convection Bake - HELP!
Hi there, Sharon! If you're unable to turn off the convection setting, we'd recommend lowering the oven temperature 25°F and keeping a close eye on the cheesecake towards the end of the baking time as it will likely need about 10 to 15 minutes less. Happy baking! Morgan@KAF
I really enjoy reading about your cheesecake and I'm intrigued however, how do I obtain your recipe? I love cheesecake so can you email it please, thanks Susan. Signed, newbee
Hi there, Marty! We're sorry that you're having troubles finding the recipe. For the future, the recipes are linked in orange throughout the articles and you can also find recipes mentioned or used in our posts underneath the header photo. You can find the recipe for NY Style Cheesecake by clicking on the title that is in orange here in our response. If you find you're still having trouble getting to the recipe and would like us to send it in a different way, please just let us know. Happy baking! Morgan@KAF
Do you have a suggestion for adding a sour cream topping? I’m making this recipe for my son’s groom cake and he doesn’t want any fruit toppings. I want to make sure the cake looks finished with no cracks on the top.
Happy to help, Lucy! Whisk a pint of sour cream with 2 tablespoons of sugar and a teaspoon of vanilla extract until it's smooth, then pour it over the cheesecake and let it set up in the fridge. That's it! You could easily use a different extract or a citrus zest in place of the vanilla if you'd like. Happy baking! Annabelle@KAF
The cracks on top are from baking temperature - use a water bath; be careful not to open the oven door more than necessary and cause temperature fluctuations inside the oven. And do not overbake it - it will not look firm in the middle but will be done. I spread just plain sour cream with maybe 2 teaspoons of lemon juice blended in over the top to "frost" it, filling in any cracks. This is great for anyone who doesn't want sweet fruity fillings - but for a "compromise" you can decorate it with fresh berries or other fruits. You are REALLY BRAVE baking this for a groom's cake ... since cheesecake does seem to taste better after it ages a day or two, as for me, I would bake it early enough so I could do something else if I wasn't totally happy with the results!! GOOD LUCK and BEST WISHES !!!
All good points, Jane. Cheesecake also freezes well; if defrosted slowly in the refrigerator you really can't tell. Susan