The best cake might just be a giant cinnamon roll

Instead of a traditional layer cake, try this sweet alternative for your next celebration.

It probably won’t take much to convince you to bake this Giant Cinnamon Roll. I mean, look at it! It’s hypnotizing from the top — an intricate, rose-like swirl of brioche and rich brown sugar filling, topped with a confectioners’ sugar glaze — and just as gorgeous when you slice in to reveal the striated design.

And yet, you might be wondering about the proper occasion. When does one serve a Giant Cinnamon Roll? You can bake it for any festive breakfast or brunch, of course, and I’d even argue that it’s a better addition than individual rolls. Since the Giant Cinnamon Roll is cut into wedges, like a cake, each person can have a taste of something sweet without committing to a whole bun. You can shape it the day before and let it rise in the refrigerator overnight, which means you really can pull it off for a morning get-together.

But you don’t need to save the Giant Cinnamon Roll for a big brunch (since how often do those come around anyway?). It’s a worthy substitute for a celebration cake or dinner party dessert. With the beautiful design built right into the recipe, you don’t have to worry about stacking layers or swooshing buttercream — particularly beneficial if you feel less than confident about your cake decorating skills. Instead, you simply make one center cinnamon roll, coil long strips of dough around it, then sit back and wait for the inevitable oohs and ahhs. The resulting roll will be striking and unique enough to show how much you really care, and for those loved ones who don’t like cake — they exist! — it’s an ideal alternative to traditional birthday cake, especially when doused with sprinkles. It might even become a new annual tradition.

The Giant Cinnamon Roll, however, is way more than its stunning looks. It’s also the ultimate cinnamon roll for the people who beeline straight for a bun’s gooey, tender heart, ripping that central swirl out before anyone else can get to it. (You know who you are.) By baking the dough in one big pan, rather than shaping individual rolls, you get a larger ratio of soft, insulated interior to drier edges. Don’t worry — there are still plenty of crisp parts, like where the outside of the roll meets the hot sides of the pan and where the high-rising sections are kissed by the oven’s heat.

On top of all that, the brown sugar filling takes well to customization. Change up the spices and flavorings as you see fit. I added a teaspoon of cardamom in place of some cinnamon, a dash of espresso powder, and almond extract. It tasted as good (or even better) than it looked and, thanks to all of the butter and eggs in the brioche dough, stayed light and pillowy for days.

As someone who prefers pastry to cake, I’m going to take my own advice when it comes to my upcoming birthday dessert: This is the year I’ll stick candles into this Giant Cinnamon Roll with the confidence that it will be just as impressive as any cake. 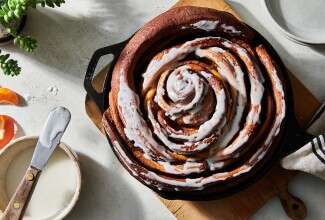 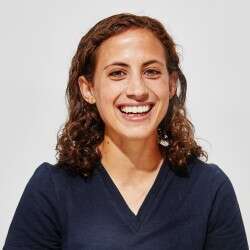 Sarah Jampel requested — and received — a deep-fryer for her 13th birthday for the dual purpose of making samosas and doughnuts. Now, [redacted number of years and redacted number of cooking disasters] later, she is King Arthur Baking Company’s Recipe Development and Test Kitchen Manager.   While S...
View all by Sarah Jampel

Followed instructions, let dough rest over night in fridge, baked according to instructions, temped it after 35 minutes before tenting with aluminum foil.
Very pleased with end result. Will definitely bake again! Thank you!