Potatoes are the secret to tender, ultra-soft rolls and bread

There are times when you want a crusty baguette to dip into olive oil or smear with tapenade. And then there are times when all you want is bread soft as a mother’s touch: a slice of squishy sandwich bread or ultra-soft pull-apart rolls. What makes bread tender rather than chewy?

Usually it’s gluten (a product of the protein in flour) that determines bread’s texture. Bread where gluten plays a prominent role will be chewier. When the gluten level is lower, or when gluten is tamed by the addition of “softeners” like milk, butter, eggs, or oil, the bread will be more tender.

But sometimes another element comes into play: starch. The higher the starch level in your bread dough, the more tender your resulting bread will be. And a great way to add starch to your bread is in the form of potatoes: cooked and mashed; dried (in the form of potato flour or flakes); or even simply by using the water in which you’ve boiled potatoes.

It’s all about the starch

Starch is a natural component of some vegetables, almost all grains (and therefore flours), and selected fruits. One of starch’s compelling properties is its ability to absorb and retain lots of liquid (just as it does in recipes using a cooked flour, like tangzhong).

The ubiquitous potato (including sweet potatoes and yams) is one of the starchiest vegetables out there. So when you add potato to your bread dough you’re upping the dough’s starch content, effectively increasing the resulting loaf’s total liquid retention — which translates to bread with soft, moist texture and a long shelf life.

How do you make potato bread?

The failproof way is to use a recipe that calls for potato, either cooked or dried. But you can also retrofit existing recipes to add potato. Let’s see how it’s done.

Holiday favorite Amish Dinner Rolls and Sweet Potato Rolls are a fine showcase for mashed potato, either freshly made or left over from a meal. I highly recommend you try either of these, not just because they’re super-tasty but because they’ll give you an idea of what a “good” mashed potato dough should feel like: soft and tacky but not ultra-sticky.

If you want to add mashed potato to your own favorite recipe, here’s how to do it: Add up to 1/4 cup (53g) mashed potato per cup of flour (120g) in the recipe. Reduce the main liquid (milk or water) in the recipe by 50% and mix the dough. If it seems dry and reluctant to come together, knead in more liquid as necessary to make a soft dough. If your leftover mashed potatoes have been salted, reduce the salt in your recipe by a pinch.

Tip: Make sure your potatoes are as smooth and lump-free as possible. Putting cooked potatoes through a ricer, rather than mashing them, will yield ultra-smooth dough and prevent bits of unmashed potato from creeping into your loaf.

By far the easiest way to add potato to your bread is by using potatoes in their dried form: flour or flakes, which are completely interchangeable. Since dried potato includes all the starch but none of the potato’s liquid, it won’t mess with your dough’s hydration.

Potato flour is whole peeled potatoes that have been cooked, dried, and ground into a cream-colored powder. Potato flakes are prepared almost the same way; they’re dried differently to create flakes rather than powder. If you use potato flakes, be sure to choose unseasoned ones.

When you’re first experimenting with potato flour or flakes, use a recipe that specifically calls for them. We offer an impressive selection of yeast recipes using potato flour on our recipe site, including classic Parker House Rolls, flavorful Rosemary Potato Rolls, and festive Cranberry Orange Holiday Bread, plus many more.

Potato water is water in which you’ve cooked potatoes; it includes the starch that leached out of the potatoes as they boiled. While it won’t add nearly as much starch (and therefore softness) to your bread as cooked potato or potato flour/flakes, potato water is an easy 1:1 substitute for the water or milk in any soft bread or roll recipe. Next time you boil potatoes, save some of the water and use it in these tried-and-true recipes: Sue’s Favorite Potato Rolls, Potato Bread, or Soft Dinner Rolls.

Tip: Pasta water is another starch-filled liquid perfect for bread-baking. If your pasta or potato water has been salted, reduce the salt in your bread recipe a bit.

With holiday baking looming ever closer, we all need help with time management. To get a jump start on your dinner rolls, see Freeze and bake rolls. 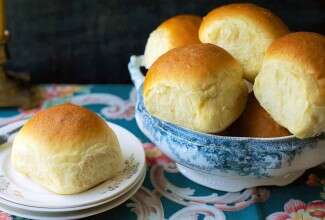 Potatoes are also great in cinnamon rolls -- they will make the rolls very fluffy and tender, and they will stay fresh longer. Not quite as good as using a tangzhong, but a lot easier in my opinion. I always keep a box of the cheap store brand of mashed potato flakes (they seem to have fewer additives) on hand for baking purposes only. Super convenient.

Great point Vivian! We love having a quick "fix" in the back of our pantry for any occasion too. Thanks for sharing yours.

Can any part of the parker house rolls recipe be made ahead of time, or can the rolls be frozen after being baked?

Hi Donna, we're sorry we weren't able to reply to your question in a more timely fashion! If ever you're in need of a more immediate reply, please don't hesitate to contact our Baker's Hotline. We're generally here M-F from 9am-9pm EST, and Saturday and Sunday from 9am-5pm EST (extended to 7pm during the holiday season). You can call us at 855-371-BAKE (2253), and we're also available via CHAT. You can definitely make the Parker House roll dough a day ahead, refrigerating it in bulk form after a slightly abbreviated first rise (60 minutes). The next day you can do directly to rolling out the dough and shaping the rolls, straight from the refrigerator. The final rise time will likely be a bit longer with the dough starting out cool from the fridge, but rolling out and shaping the rolls will help warm up the dough. You can also freeze the baked rolls, thaw out at room temperature, and then reheat briefly (5-10 minutes) at 300-350°F on a parchment lined sheet tray that is tented lightly with foil. Be careful to reheat just until warm, as the bottoms may brown up too much if left in the oven too long.