Making a traditional soft pretzel at home can be done in much the same way as at a professional bakery: Mix the dough, leave to ferment, shape, dip in an alkali bath, and then bake. While there's a variety of ways to shape pretzels, which we'll look at later, the part that sometimes separates the home baker from the professional baker is the way they prepare the alkali bath: When making pretzels at home, most use common baking soda, whereas many bakeries use lye (caustic soda) for the bath.

Lye is a strong alkali that can be dangerous if misused, but it's lye that enhances the Maillard reaction on the outside of the dough. This reaction gives each pretzel a chewy crust, mahogany color, glossy sheen, and that unmistakable pretzel flavor typical of a German soft pretzel.

Using a baking soda bath, which isn’t nearly as caustic as lye, produces a similar result, but not nearly at the same intensity. The exterior crust will still be somewhat soft; the coloring looks brown rather than deep mahogany; there's far less of a sheen on the crust; and the typical pretzel flavor is there, just not at the same magnitude.

Even though each approach to the alkali bath results in a different outcome, both styles taste quite delicious. Let's take a look at each method for preparing a pretzel bath. You can decide which works for your kitchen. 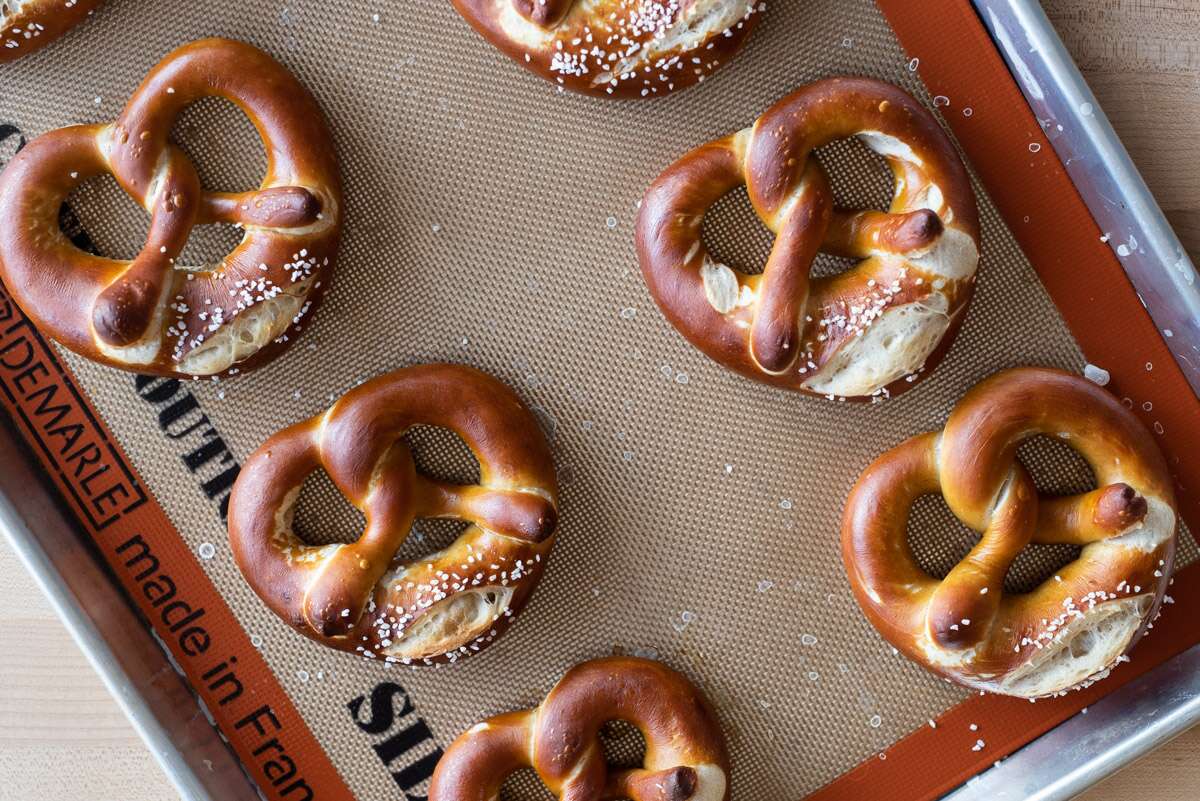 Making pretzels at home with a lye bath

Traditional German pretzels are first dipped in a 3% to 4% lye-to-water bath before baking. Pretzel purists often argue a pretzel isn't really a pretzel unless lye is used.

The pretzels shown above were dipped in a 4% lye solution using the process outlined in BREAD, by Jeffrey Hamelman, before being scored, salted, and then baked at 450°F. As you can see, they baked to a beautiful mahogany color with a glistening crust.

Let's acknowledge: lye can be a little scary. It is highly corrosive, after all, but with the right preparation and a careful approach, working with it isn't as daunting as you might think. 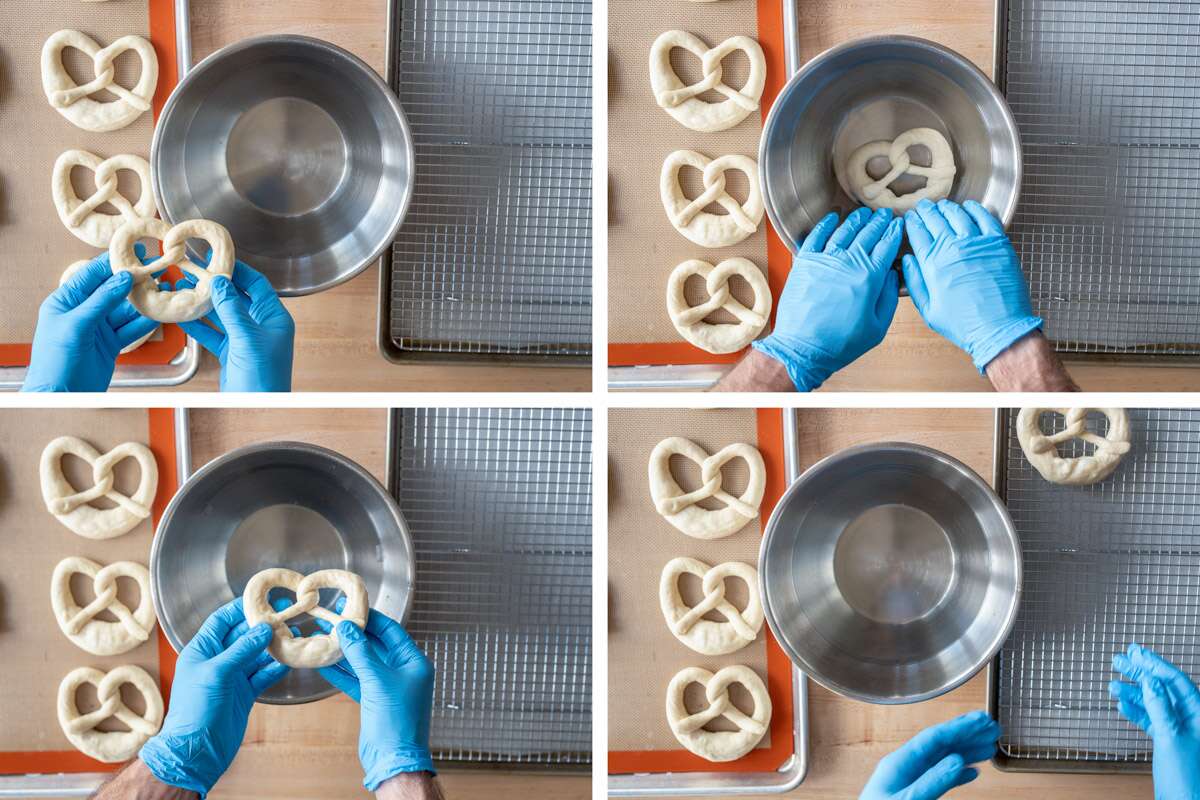 The process is straightforward. While wearing eye protection and rubber or latex gloves, mix 37g of lye powder/pellets into a bowl holding 4 cups (907g) of cold water and stir to dissolve. Transfer your shaped pretzel to the bath for 10 to 15 seconds. Then remove the pretzel and place it on a steel rack over parchment paper to catch any excess solution. After a few minutes, transfer the dipped pretzel to a silicone or parchment paper-lined baking sheet. The dough can then be scored, salted, and baked.

Don't expect to find food-grade lye (100% sodium hydroxide) in grocery stores, but it's readily available online in the US. 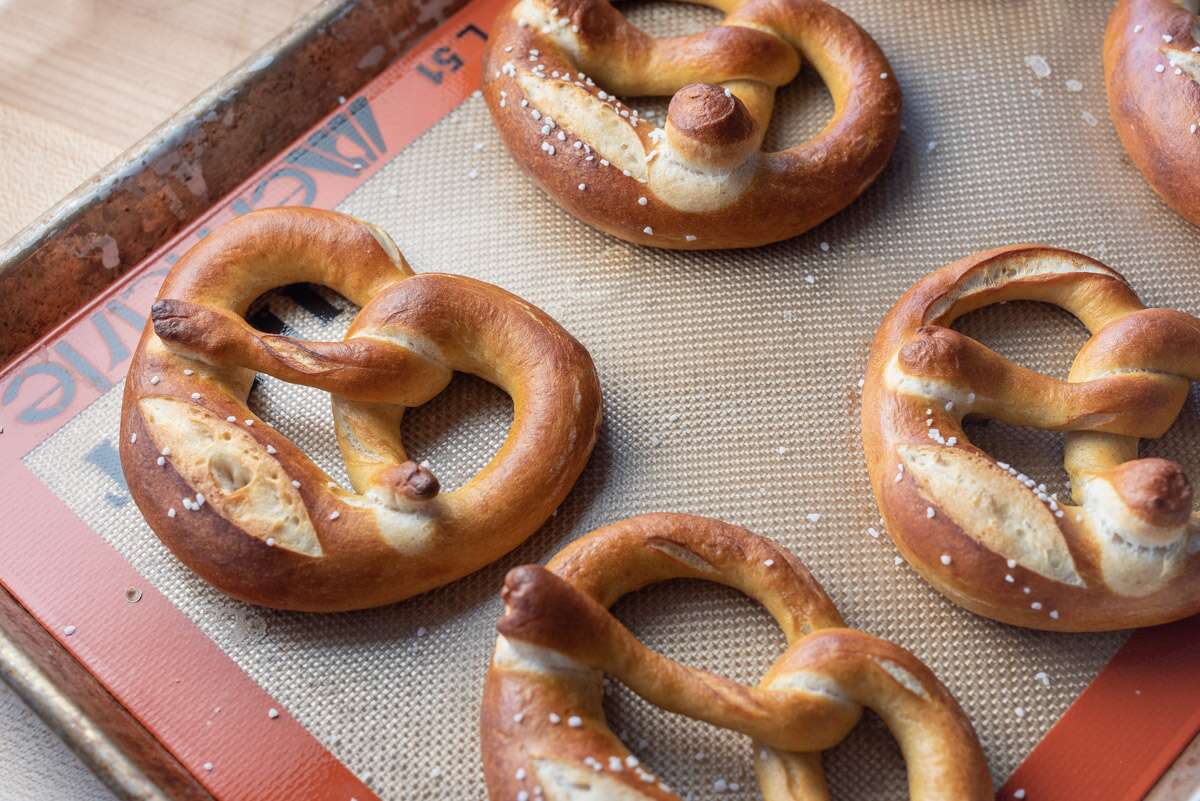 Making pretzels at home with a baking soda bath

Using a baking soda bath is a common approach for home pretzel bakers. Baking soda is a staple of many baking recipes and it's a much weaker alkali. This means it's far less corrosive and safer to handle.

As you can see above, the resulting pretzels still looked great but they have less crust coloring and shine. Texturally, the interior was still quite chewy and soft. While the classic pretzel flavor was still detectable, it was not at the same intensity as the pretzels made with a lye bath. 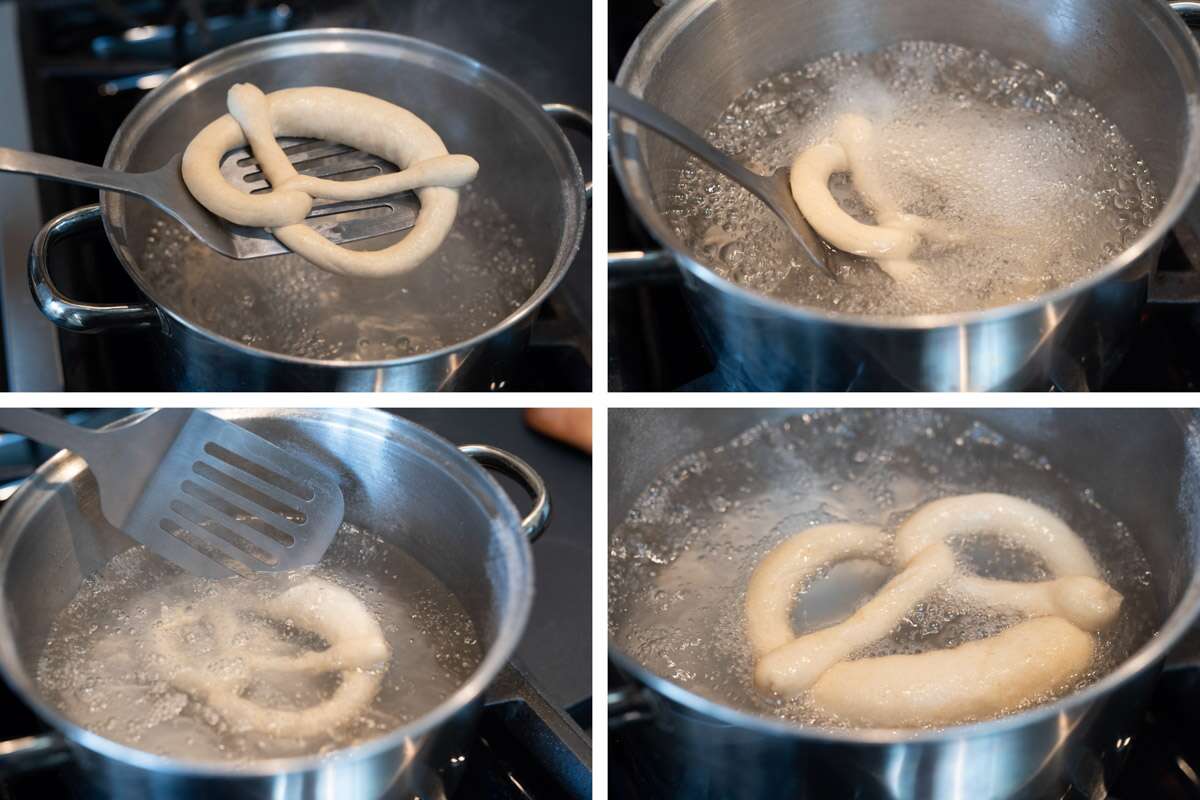 The baking soda bath seen above follows King Arthur's Classic Pretzels recipe. In a large, wide pot, bring 6 cups water and 2 tablespoons baking soda to a boil. Then, transfer one shaped pretzel to the bath using a slotted spatula and let sit for 1 minute. Then move the pretzel to a cooling rack on top of parchment paper. This allows any excess solution to drip away.

After processing, transfer each pretzel to a baking sheet lined with silicone or parchment paper. Then, score (as seen below), salt, and bake. 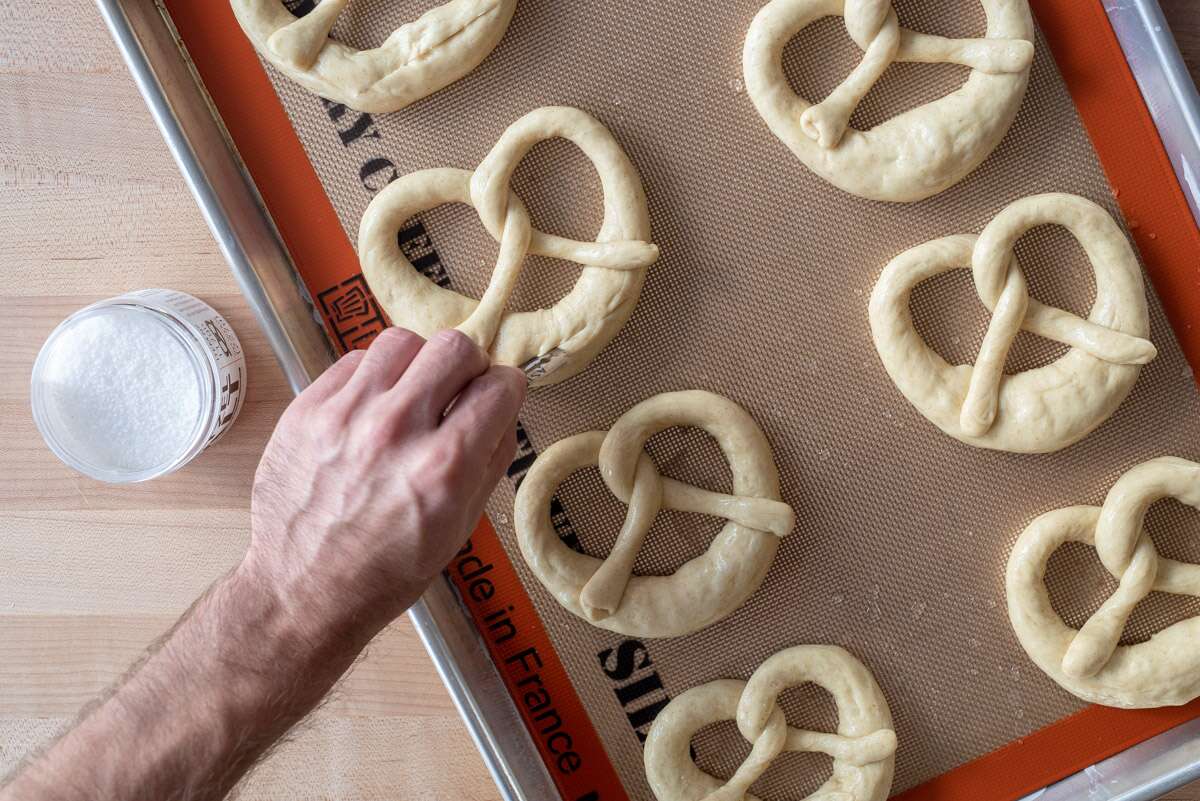 Now that we've discussed the differences between pretzel baths, how do we shape these beautiful little knots?

There are generally two methods for shaping pretzels into a traditional knot form:

In southwest Germany (Swabia), pretzels are usually shaped with an exaggerated bulge at the bottom accompanied by a large pretzel loop. Additionally, the crossed arms at the top of the pretzel are rolled very thin. The goal is to have a thick, soft area at one end, and delicate, crunchy bites at the other. This leads to a distinct contrast in texture between each end.

In Bavaria, pretzels taper less from the middle of the bulge to the crossed arms. This style emphasizes a consistent thickness all the way through. This constant thickness makes them perfect for slicing and making into a sandwich. Of course, they're also great for dipping.

My preference is for a pretzel that's a little more uniform throughout. As with many things in baking, shaping does take some practice. Once you become comfortable rolling out the dough to your desired thickness, the final twisting is a breeze. 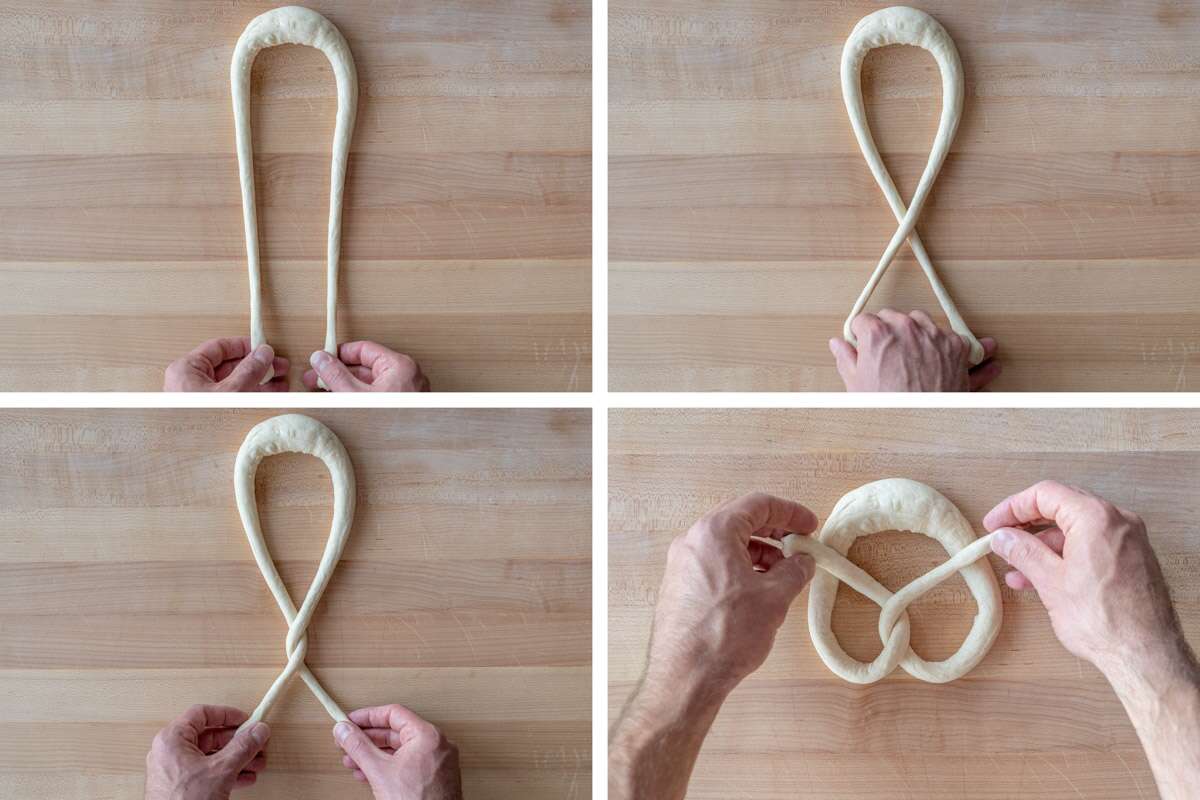 First, preshape your dough into "cigars" and let them rest until slightly relaxed. Then, roll the dough out into a long strand as seen above. Next, lay the dough out in front of you in an upside-down "U" shape (upper left, above). Take the tip at the right side and fold it over the left.

Next, take the tip that's now on the right side and fold it over the left again (the second twist). Finally, fold the tips up to overlap the sides of the pretzel loop (lower right, above). Lightly press down the overlapping tips to encourage sticking. 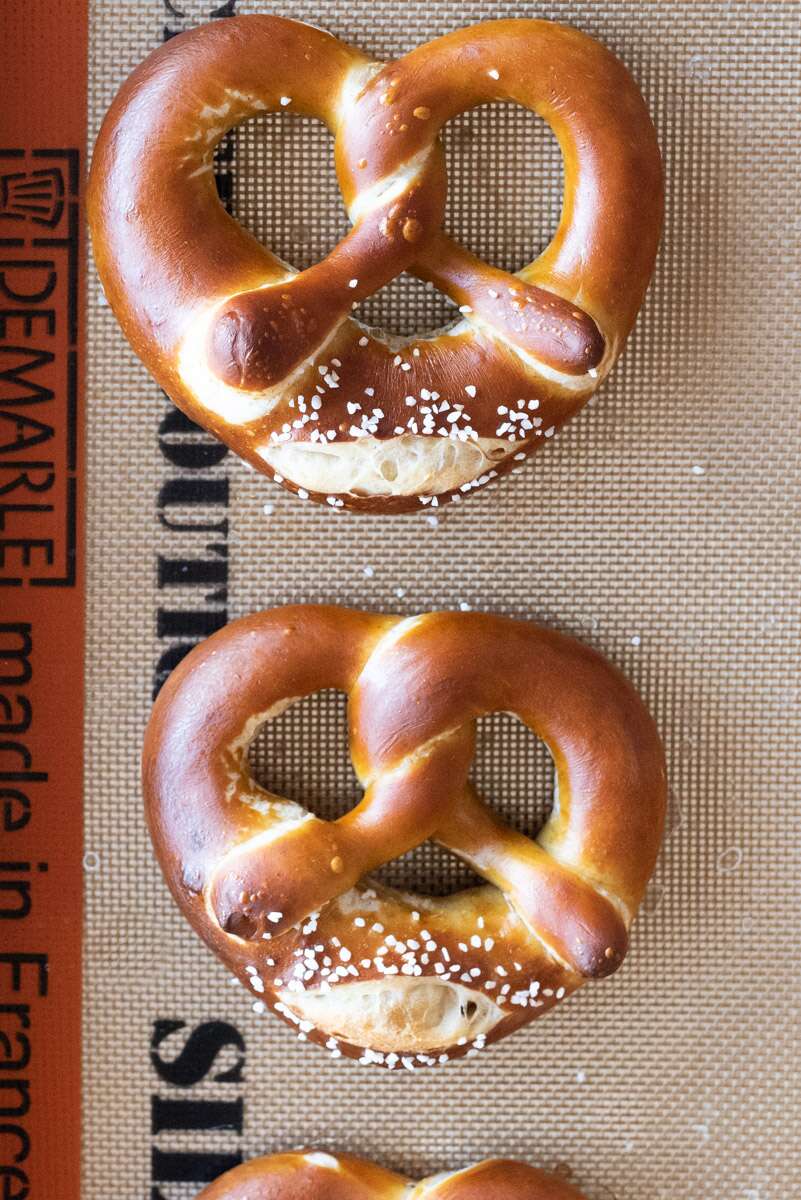 Making pretzels at home: Which method should you choose?

After much testing, I was surprised to see how well my baking soda pretzels turned out. As a baker who typically likes to adhere to tradition, I was dubious at first, but using baking soda proved to be quite the acceptable alternative. While I do prefer using lye, for both taste and texture, I'd still be happy with the results using baking soda.

In the end, the choice between lye and baking soda is yours. If you’re wary about bringing lye into your kitchen, baking soda works well. And while you won’t have the same color, sheen, and texture, it still boils down (sorry!) to a delicious pretzel.

My advice with shaping is to try a different approach each time until you find one (or two) that you love. Sometimes it's nice to have thin "arms" for crunch. But then there are times when there's nothing better than a pretzel stuffed like a sandwich.

If you're looking for more information on making pretzels at home, and specifically when using lye as per tradition, look no farther than Hamelman's authoritative book, BREAD. As he states in his book, he made upward of thousands of pretzels a week – if there's anyone who knows pretzels, I daresay it's him. 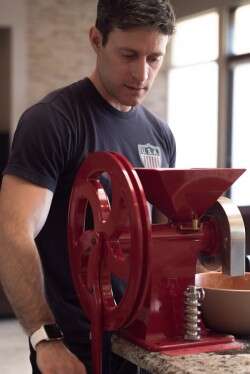 Why do my pretzels blister (small bubbles on skin) after cooking? I use a lye bath for about 20-30 seconds then place in oven at 425 degrees. Is it due to too much excess liquid? Aiming for more of a smooth, shiny surface.

Hi KJ, do you happen to retard your shaped pretzels in the refrigerator overnight? Refrigerating shaped dough often results in blisters forming during baking, which is related to condensation forming on the surface of the baked good during a long rest in the fridge.

Hello. This article is great. I love making pretzels but find that they tend to have a metallic taste. I have only used the baking soda method and wonder if using lye would fix that problem. Any thoughts? thank you

Hi Brooks. If you are finding that the baking soda is leaving behind a metallic flavor, it could be that the pretzels are boiling for two long or the dough is not allowed enough time to drip off the excess boiling liquid. Switching to lye, which is more alkaline could be a better solution for this issue. Happy Baking!

thank you! Ill give it a try and let you know!

Two questions,
1. Just to confirm, you don’t boil the lye.. cold water correct?
2. What is the best way to dispose of the lye bath?

Mith, you are correct, the lye is in the cold water. To dispose of the lye water, some people flush it down the toilet but it may be best to consult with your plumber first.

Do not flush it down a toilet a sink drain is much better...lye is the main active component in drain cleaner (obviously not food grade), but if that is not something you would put in your toilet (as you shouldn't) don't put the lye solution there either. My dad and grandfather (both plumbers) would have a fit if they saw this recommendation from a reputable company!

Hi Jill, we appreciate you correcting us on this one! Thanks!

I’ve made the pretzels from the perfect loaf at least 15 times and they come out perfect every time! I usually make at least a double batch to justify all the effort and then give most of them away to friends and coworkers. That being said I would love to be able to freeze the lye dipped pretzels and keep them on hand in the freezer ready to pop in the oven for a fresh baked pretzel. Would there be any way to do this safely? Would freezing the lye ruin the flavor?