The secret to amazing gluten-free goods

It took three years for doctors to figure out what was wrong with Sarah Barlow. As she entered the ninth grade, her body began to attack itself, refusing to absorb important nutrients and dropping to a dangerously low weight.

After countless inconclusive tests, a doctor finally landed on the right diagnosis — celiac disease. While perfectly safe for most people, the combination of proteins in gluten — found in wheat, rye, and barley — triggers a violent reaction in less than 1 percent of Americans. The solution is simple, but far from easy: cut out gluten completely from your diet.

"Just think," says Sarah's mother, Emily Barlow, "you're telling a teenager, no more hamburgers. No more pizza. No more french fries, because if they're fried in the same fat as [breaded] onion rings, you're done."

Emily, a lifelong baker, turned to gluten-free recipes. But the results left her discouraged. "They always came out gritty," she says. "They're so doctored up with sugar that you're just tasting sweet rather than flavor."

With Sarah's birthday approaching and few other options, she returned to her local market and picked up a gluten-free cake mix from a company she'd never heard of: King Arthur Flour.

"And let me tell you, when I served that chocolate cake, everyone just went, 'are you, are you sure that this is gluten free?' " Emily says with a laugh. "So I went back to the store and I said, 'you have got to put more King Arthur Flour mixes on the shelf and draw attention to it.' Finally, it's gluten-free food that you don't need to apologize for. It's just really a good, good product."

Stories like this drive King Arthur Flour. They reward the years of work that go into our gluten-free flours, recipes, and mixes. And they prove what the company has always known about baking, gluten free or otherwise: Always use the best ingredients and never settle for a recipe that's just "good enough."

"We hear again and again that the most important thing to gluten-free bakers is: just make it taste good," says Sue Gray, head of King Arthur Flour's research and development team. "We want people to say, 'that's a good cake,' not 'that's a good gluten-free cake.' " This level of quality requires intense testing. Sue and her team must research gluten-free ingredients, tweak recipes, and then taste-test everything hundreds and hundreds of times.

As an employee-owned business, perfecting these recipes becomes a company-wide effort. Colleagues from all departments are welcome to swing by the test kitchen and help review. The company calls this "bite and write" — grab a scone, a cookie, or a slice of whatever is fresh from the oven and jot down your thoughts. The R&D team collects this feedback and continues testing until they nail it.

Expanding King Arthur Flour's business to include gluten-free products was not an obvious decision. For almost 200 years, the company has thrived on American wheat. (A few of us own "I Heart Gluten" T-shirts.) So when we started hearing people ask for gluten-free options, a debate grew within the company.

"We're a baking company. We want everyone to bake."

"A lot of us asked: Aren't we a flour company?" says Sue. "But we agreed: No, we're a baking company. We want everyone to bake. And if gluten is getting in the way for some people, then we better figure out gluten-free alternatives."

Years have passed and Sarah — now Sarah Hymas — has started a family of her own. Her husband and kids show no sensitivity to gluten, but they keep a mostly gluten-free household for her.

"We use King Arthur all the time to make cookies and bread and cakes," says Sarah. "I've never heard a complaint. They love it." 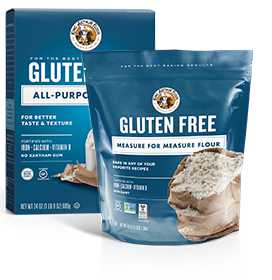 In addition to more than 200 gluten-free recipes and a full line of mixes, King Arthur offers several kinds of gluten-free flour.

King Arthur Gluten-Free Flour, a carefully tested blend of white rice and whole-grain (brown) rice flours, tapioca starch, and potato starch, is perfect for all of your gluten-free baking recipes. Bake your favorite foods in gluten-free versions, without grittiness or aftertaste.

King Arthur Measure for Measure lets you convert your favorite recipes into gluten-free versions. Simply substitute this flour 1-1 for an easy and convenient swap for conventional flours. Fortified with iron, calcium, and vitamin B, this carefully tested blend is a must-have for bakers who are new to gluten-free baking or anyone baking gluten-free who wants to enjoy recipes they used to love. Ideal for muffins, cookies, cakes, brownies, pancakes, and other non-yeasted recipes. 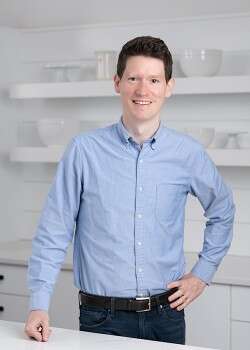