A sweet twist on banana bread

Adding a swirl of flavor 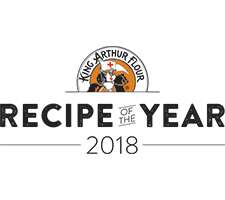 Banana bread: it's sweet, moist, tender, flavorful… and easy. SO easy, in fact, that it begs for variations: the addition of chocolate chips, transformation into muffins, a shower of shredded coconut on top. Or, as we’ve recently discovered, a swirl of rich filling inside.

Many of us old-timers learned to make banana bread in home ec. class; e.g. cooking and sewing, for those of you who were never subjected to it in junior high (er, middle school). Girls took home ec.; boys took shop, where they made end tables and gained a passing acquaintance with which way to turn a screwdriver, if my brother is any evidence.

Home ec. banana bread was usually the plainest of the plain: sugar, flour, eggs, oil, baking powder, salt, bananas. No spices; no nuts; the shorter (read: less expensive) the recipe the better. But, as with so much of American cooking, we gradually created fancier banana breads. 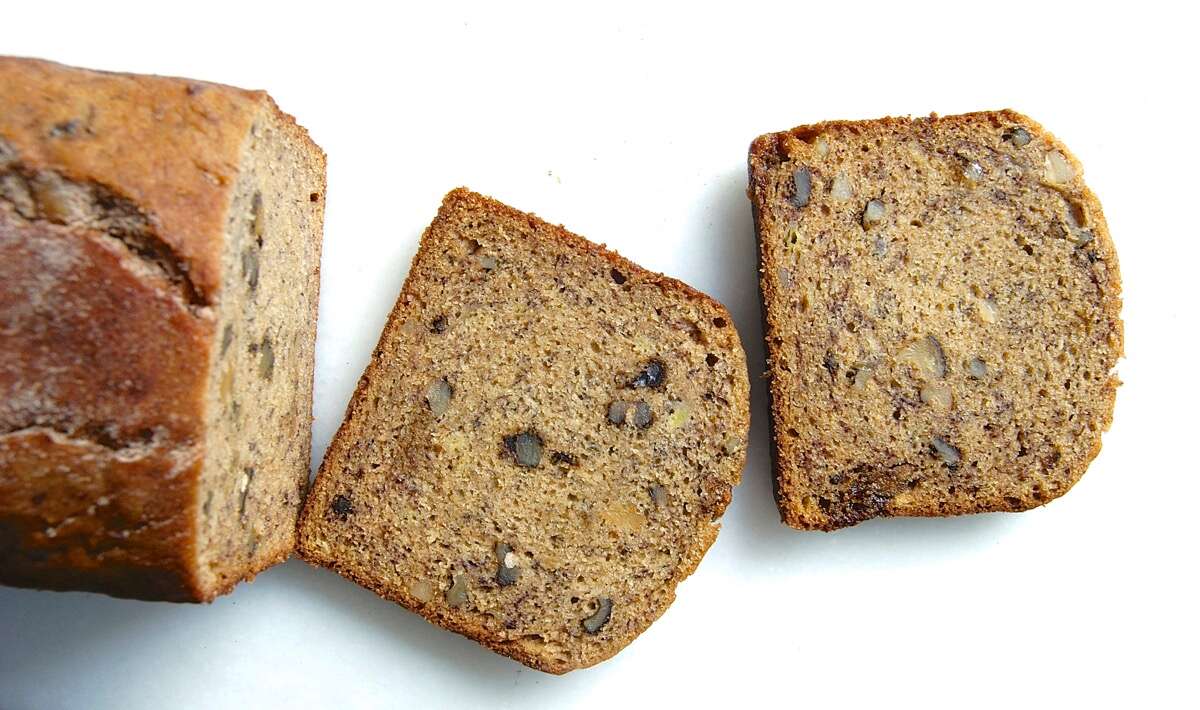 And now, for our latest version of America's favorite quick bread: banana bread filled with a swirl of sweetened cream cheese. Or cinnamon-y nut streusel; take your pick.

I've made both, shared both, and the consensus is... choosing a favorite isn't possible, they're both that good.

Let's see how it's done.

First things first: Take an 8-ounce block of cream cheese out of the refrigerator, unwrap it, place it in a mixing bowl, and let it come to room temperature.  Skipping this step will result in a lumpy swirl. 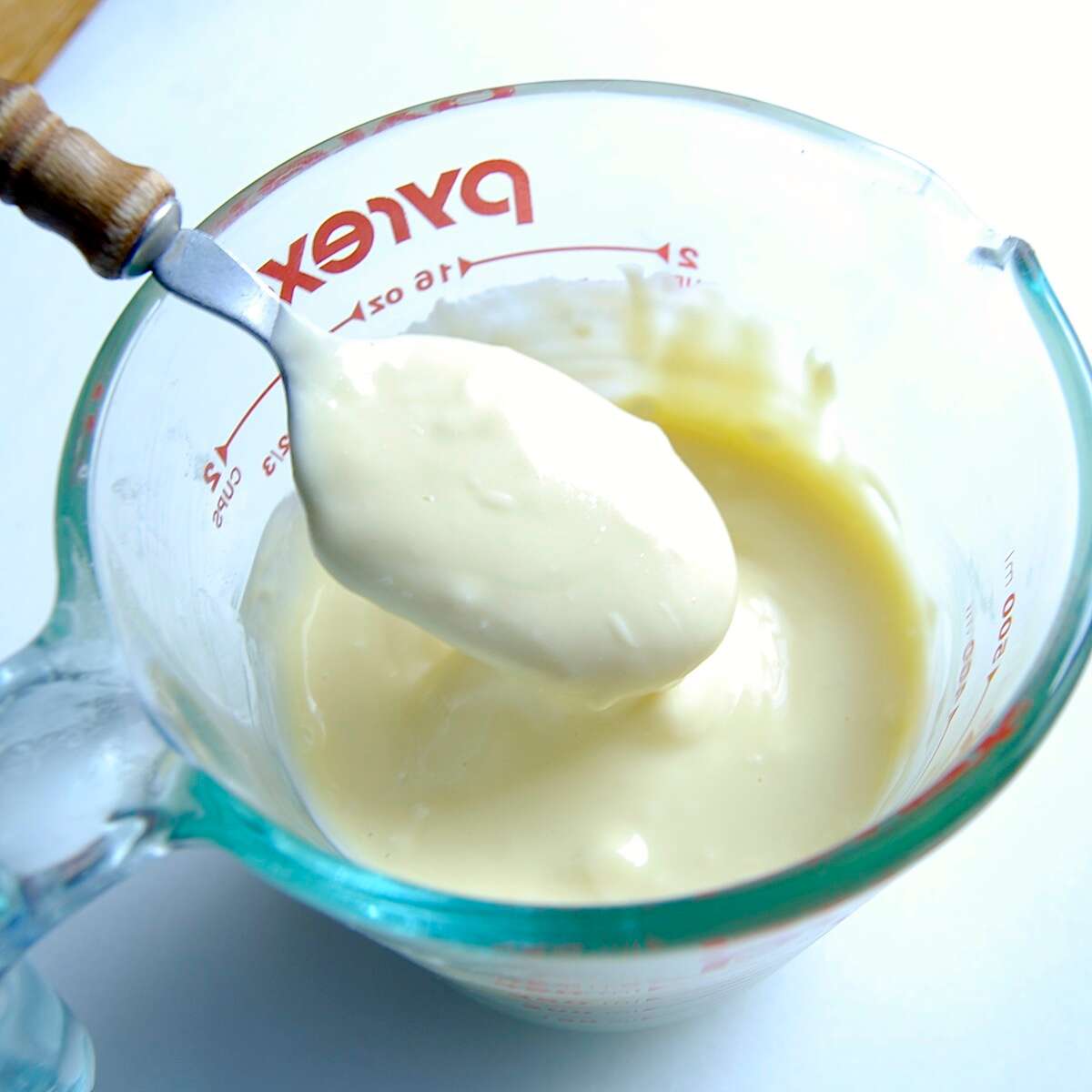 Add the following to the cream cheese in the bowl:

Beat at low speed until smooth, or nearly so. For easiest pouring, transfer to a spouted measuring cup.

Make the batter for our Whole-Grain Banana Bread, omitting the nuts.

Why leave out the nuts? With the nuts AND the swirl, the volume of the batter really pushes the capacity of a typical 9" x 5" x 2 3/4" pan. Add them if you like, but put the pan onto a baking sheet to catch any potential batter spillover in the oven. 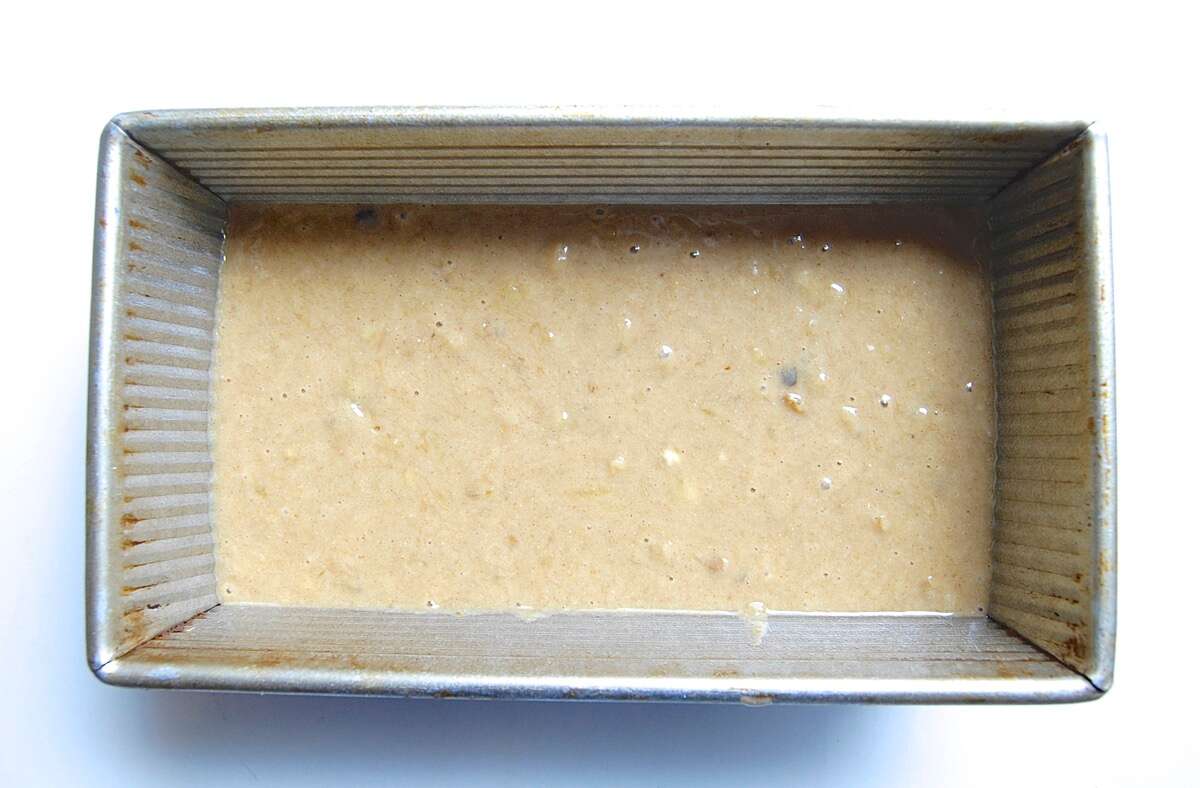 Pour one-third of the batter into a lightly greased 9" x 5" loaf pan. This should be about 1 1/3 cups batter. If you have a scale, weigh the batter and mentally divide it in three; each third will weigh about 375g. Notice I say "about;" don't stress if you have slightly more or less batter, everything will work out just fine. 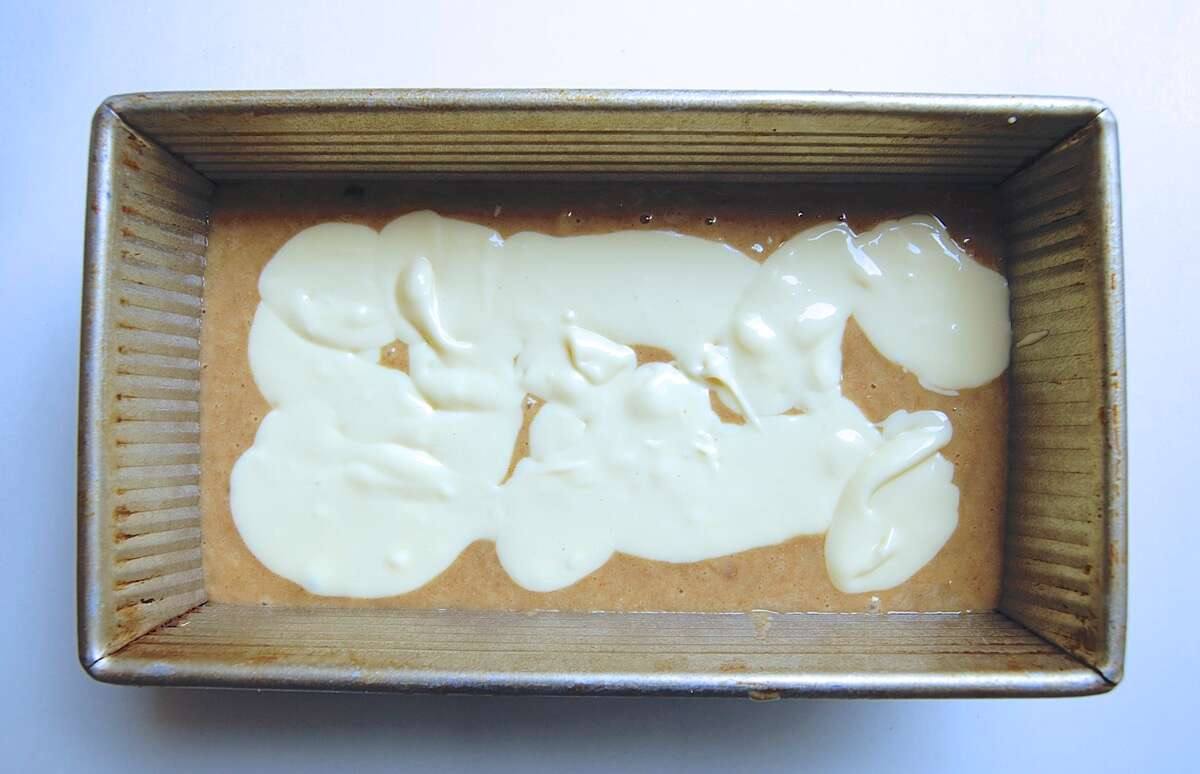 Spoon half the cream cheese mixture atop the batter. If you're measuring by volume, this is about 1/2 cup + 2 tablespoons; by weight, about 160g. 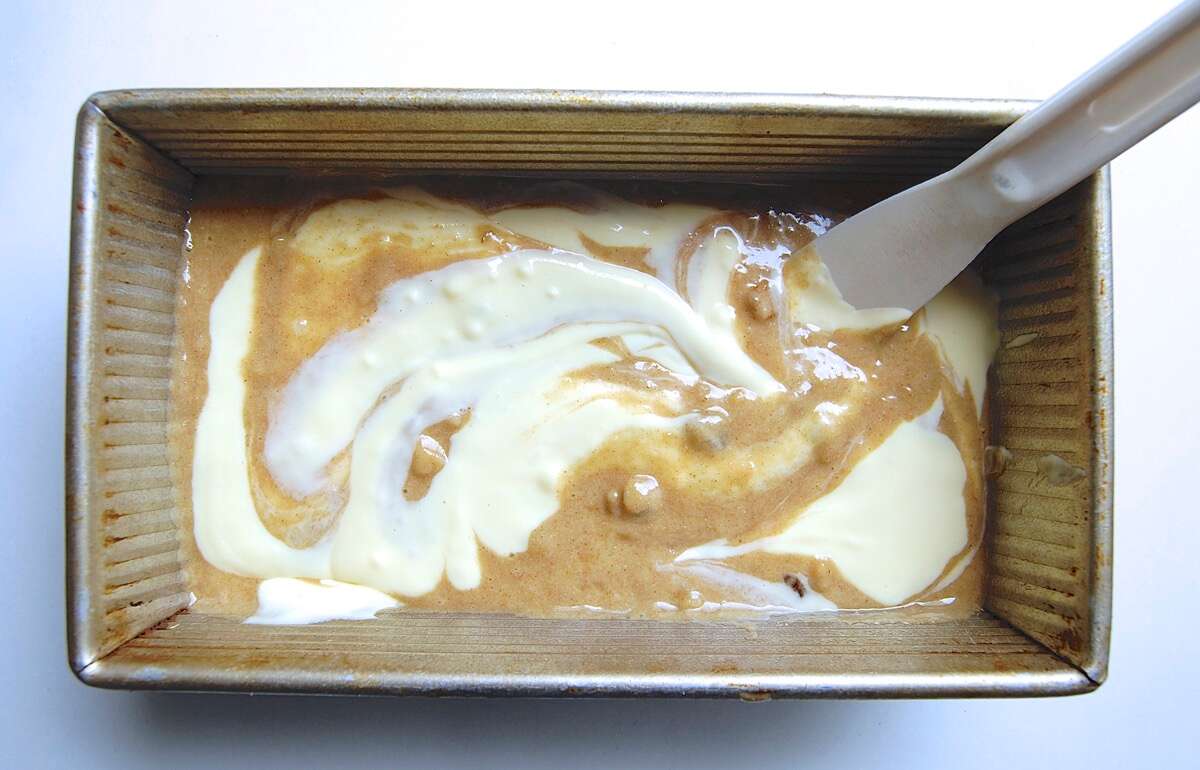 If desired, swirl the filling into the batter minimally. You'll see at the end what effect you get from swirling rather than simply layering. 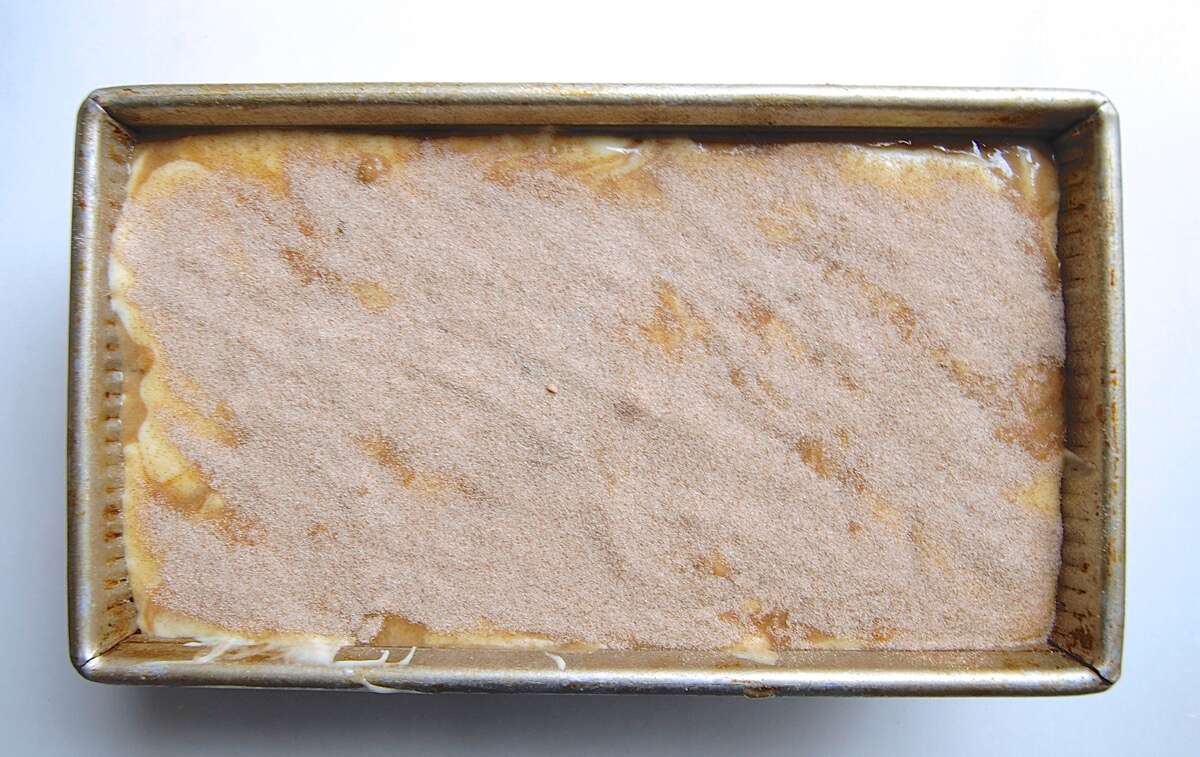 Don't forget the cinnamon-sugar on top!

Bake the bread in a preheated 350°F oven for about 85 to 90 minutes, tenting it with foil after about 50 minutes (to prevent over-browning). When done, the bread should register at least 195°F at the center.

Let the bread cool for about 10 minutes before removing it from the pan and placing it on a rack to cool completely.

Banana bread with a cinnamon-streusel swirl

You know that wonderful swirl of filling in a cinnamon-streusel coffeecake? That's what we're replicating here. We've taken the chopped nuts that would ordinarily go into the batter, and added them to the streusel instead; doing so makes a thicker swirl, and better presentation.

Make the batter for our Whole-Grain Banana Bread, omitting the nuts. 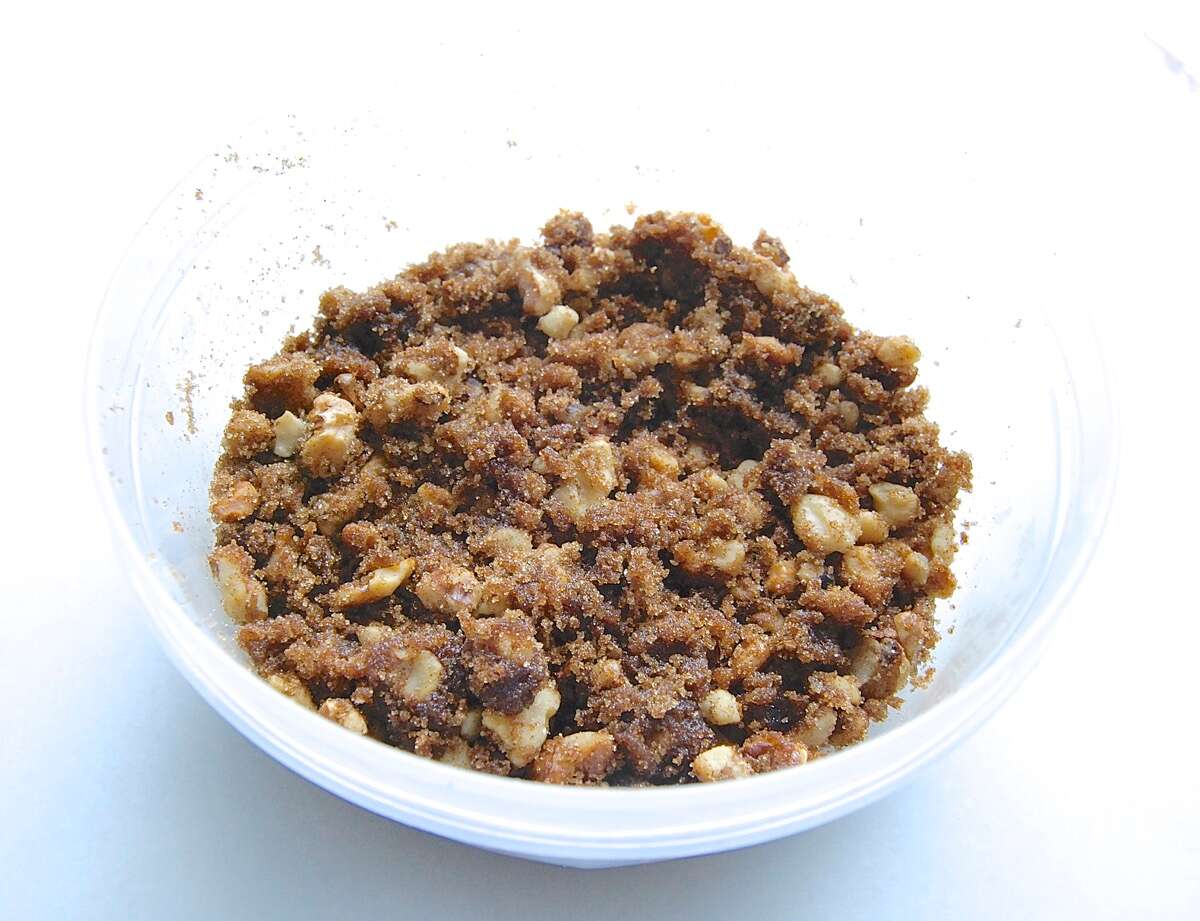 *Toasting nuts adds richness to their flavor. I always toast nuts in my toaster oven; it takes about 6 to 8 minutes at 350°F. Some people prefer dry-frying their nuts, and some even microwave them; your choice.

Once again, mentally divide the batter in thirds.

Pour one-third of the batter into a lightly greased 9" x 5" pan. 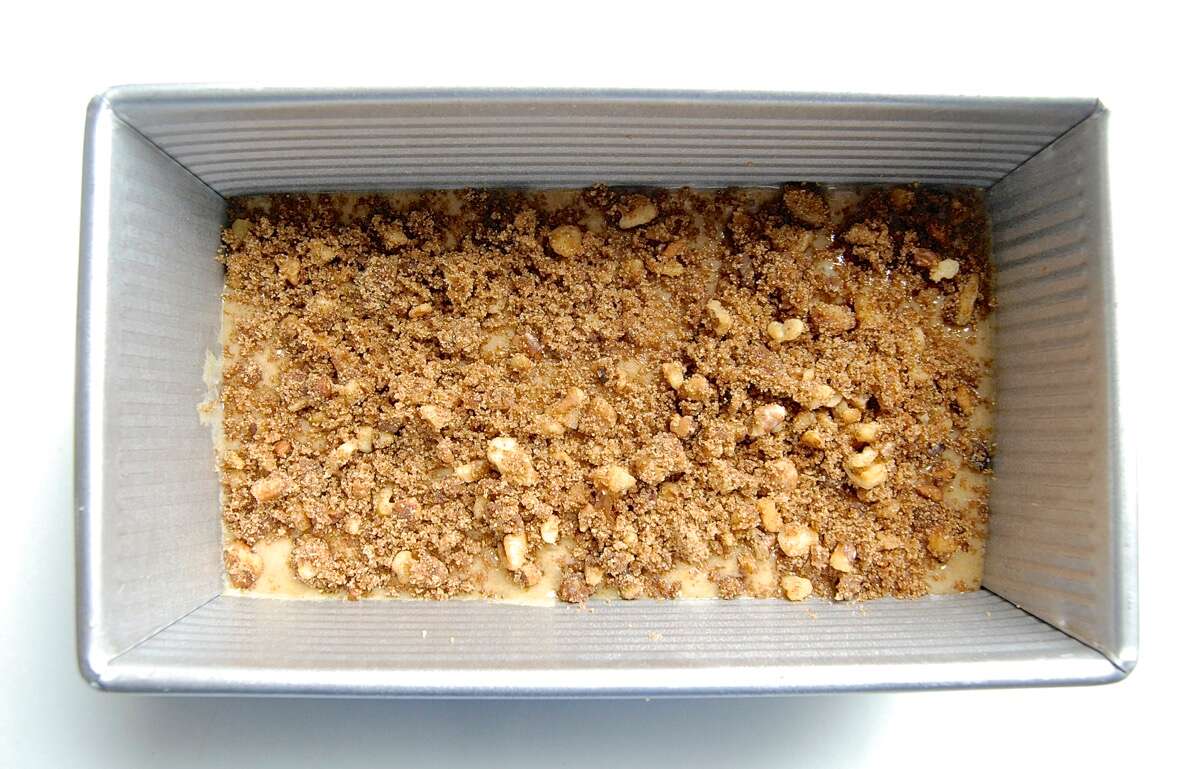 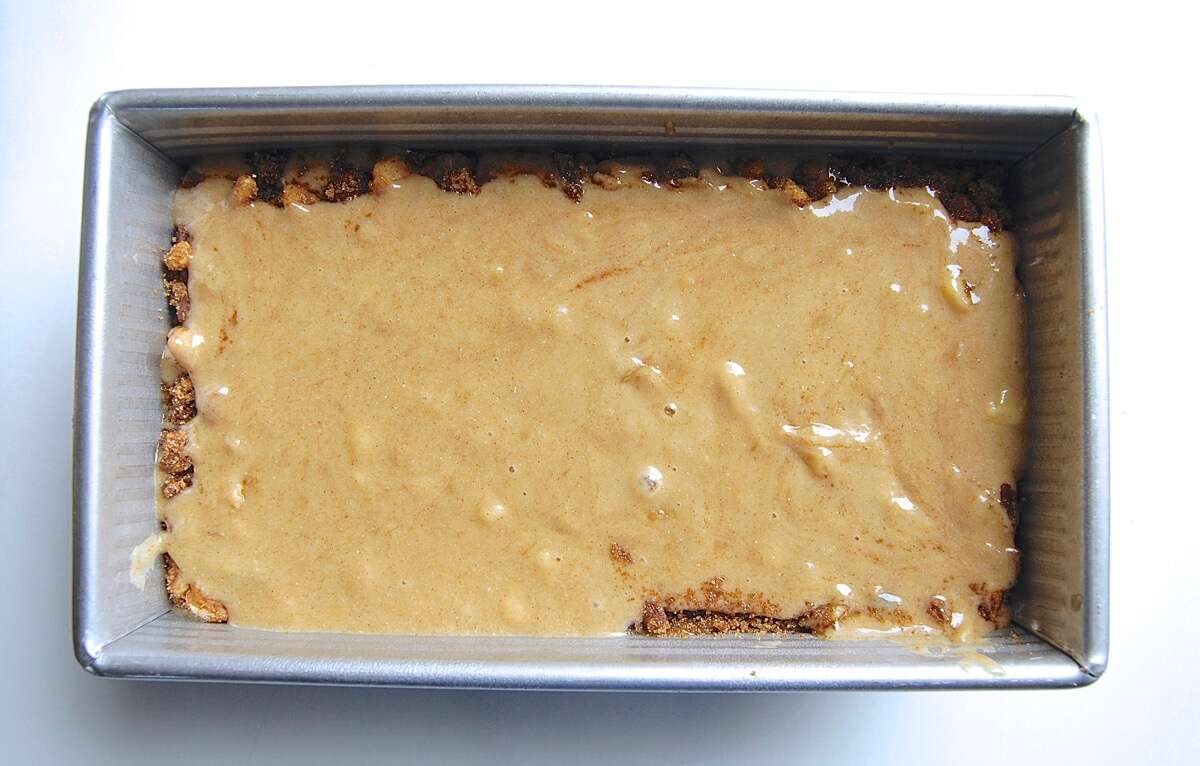 Top with another third of the batter; don't worry about the batter covering the streusel entirely.

Sprinkle on the remaining streusel, and finish with the remaining batter. Again, remember the cinnamon-sugar on top; it's a delicious final touch.

Bake the bread in a preheated 350°F oven for about 80 to 85 minutes, tenting it with foil after about 50 minutes (to prevent over-browning). When done, the bread should register at least 199°F at the center.

Why the difference in baking time/temperature between this and the cream cheese swirl bread? With all the moisture from the cream cheese, it takes longer for that loaf to bake all the way through; and its final temperature will be a bit lower, since it's a slightly moister bread.

Ready to see how these breads turned out?

It's difficult to wait for them to cool before slicing; kind of like waiting in bed on Christmas morning for your parents to give the signal. But please do wait until they're, at most, lukewarm before taking a knife to them. 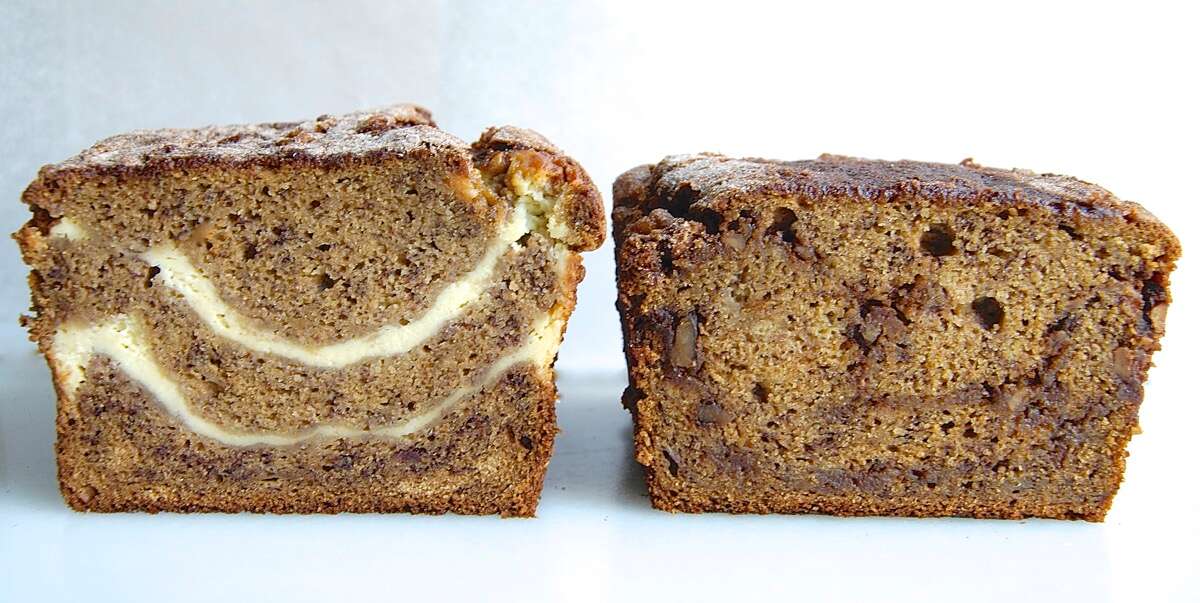 Smile! The two layers of cream cheese filling turn into a couple of smiles. Why the "droop" in the center? Bread bakes from the outside in, holding the filling in place along the sides, but allowing the center to sink just a bit before the batter sets around it.

You can see this same effect in the bottom layer of streusel swirl; the middle is more muddled. Also, be prepared: you'll see a larger "smile" in the center of the loaf than you will at either end.

And what about the cream cheese layers that I swirled into the batter rather than leave undisturbed? 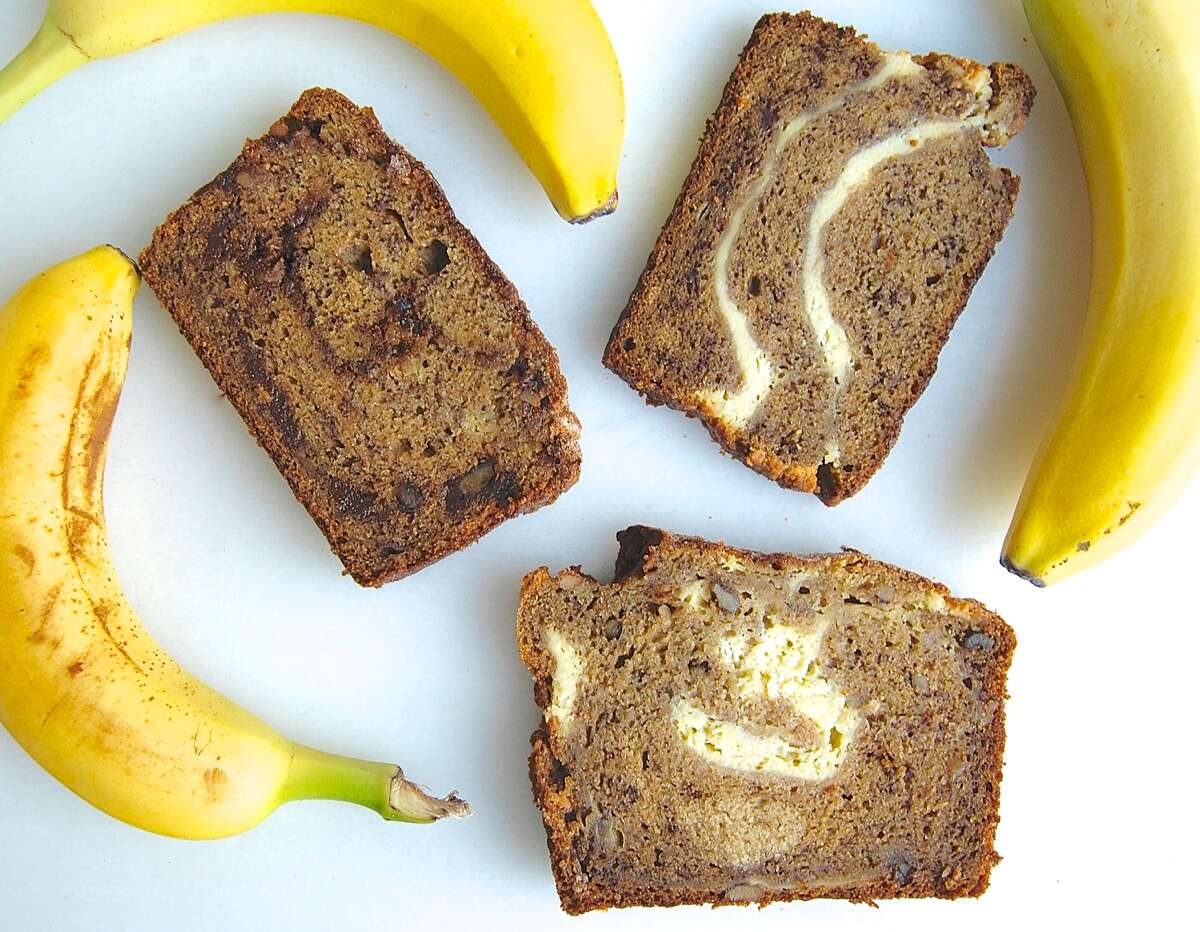 The "swirl" became a rather haphazard marbled effect that changed throughout the loaf. The large-ish blobs of cream cheese were scattered throughout, rather than forming an even layer stretching from side to side. As always, your choice.

So, what do you think — ready to give this bread a swirl? Again, start with our Whole-Grain Banana Bread and add filling: cream cheese, cinnamon-streusel, or your own favorite. I hear toffee crunch bits calling my name...

What other swirls sound good to you? Let us know in comments, below.

Also — if you took home ec. or shop back in the day, give a shoutout to your teacher! He or she may be long gone, but it's the thought that counts. (Thank you, Mrs. Deabler at Central Junior High...)

How about storage for the cream cheese version? Does it have to be refrigerated or can it be left out?

Hi there, Dawn! We would recommend keeping the loaf in the fridge if you've added a cream cheese swirl. Happy baking!

Are the Cinnamon Sweet Bits Gluten free?
Hi there, Carol! Our Cinnamon Sweet Bits aren't a certified gluten-free product and are produced on equipment that also processes wheat. We don't test the Cinnamon Sweet Bits for the presence of gluten so we can't guarantee that there has been no cross-contact. Kindly, Morgan@KAF
Can I start with the gluten-free banana bread mix adding the extras?
You could certainly use these techniques with the Gluten-Free Banana Bread mix! It may take a little longer for the banana bread to bake, maybe about 15 minutes longer, so just keep an eye on it to ensure that loaf is fully baked. Happy baking! Morgan@KAF
Fond memories of Mrs. Love Demonte’s food class st Torrance High School in the early 70’s.
Fantastic cream cheese banana bread! Was so intrigued by the recipe I had to try it and am glad I did! Can't wait to try the streusel version!
My husband is a diabetic so I have to bake with Splenda. How would the sugar exchange be in the recipe.
Thanks for asking, Sue. We don't typically include artificial sweeteners in our test baking, but we welcome you to try baking this loaf with Splenda if you'd like. For best results, follow the substitution instructions on the package. (If you're using Splenda for Baking, it's typically a 1:1 substitution.) We bet your husband will be quite thankful for your homemade banana bread! Kye@KAF

The best bananas for banana bread

How ripe should they be?