The story behind this pantry star 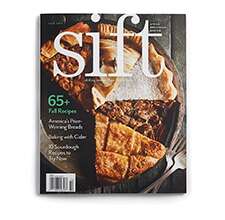 The Fall 2017 issue of Sift magazine features one of our favorite secret ingredients – boiled cider – and the story of a family's effort to preserve this New England tradition.

Wood's Cider Mill sits on a rolling hillside, overlooking a sweeping valley below. Steam billows out of the boil room into the crisp autumn air, where the Wood family has been turning fresh apples into boiled cider for nearly 150 years.

Thicker and darker than maple syrup, boiled cider is made from freshly-pressed apple cider that's transferred to an evaporator (not unlike those used to boil sap), and is heated until it reaches peak viscosity. Its nuanced apple flavor is at once robust and sweet, and varies slightly each season, reflecting the changing qualities of the year’s weather, soil, and air.

The cider mill has been a family operation from the start; to this day, owners Willis and Tina Wood's children come from all across the country to help with the harvest. Apples are hand-loaded from a truck parked in the back of their converted sugarhouse, then transferred onto a belt where they're washed, macerated, and then poured onto the press. 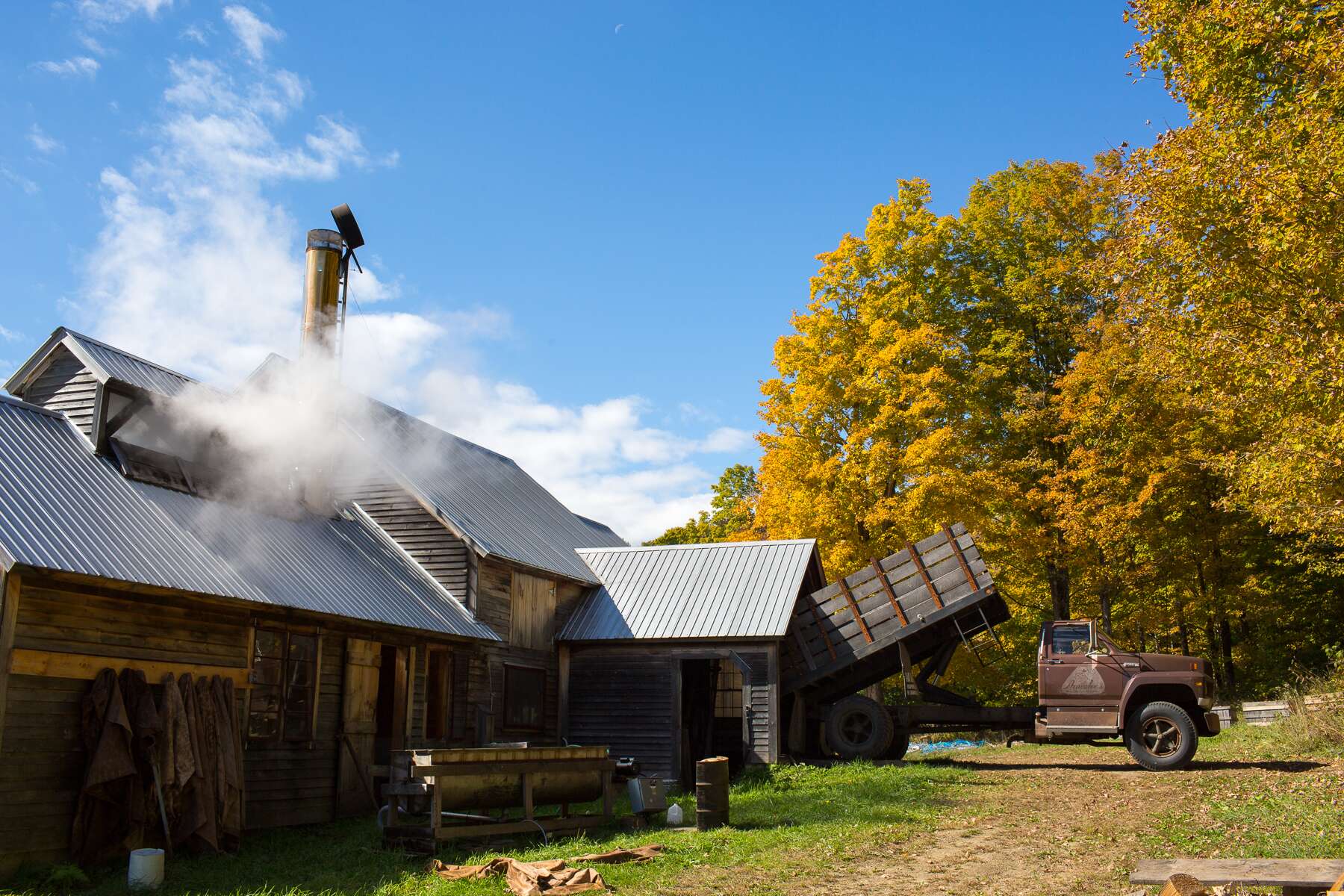 Originally a sawmill, the business was converted into a cider operation toward the end of the 1700s when the logging industry moved west, harnessing the power of water to mill apples instead. Cloths and wooden hydraulic racks sandwich the mashed apples in layers, which are then strained using the original Twin Screw Press that was purchased by the Wood family back in 1882 and has been used ever since.

"Back then, there was no refrigeration," Willis explains, "so once you'd had all the cider and hard cider you could stand, you had two choices [for what to do with the rest] — boil it down, or make jelly preserves."

In Springfield, Vermont alone, there were three cider mills at the turn of the century, but around 1930, demand began to fall. Willis believes that as canned and pre-packaged convenience items began to replace home cooking, the need for specialty ingredients such as boiled cider declined. One by one, cider presses disappeared from towns around New England. When Willis took over the business from his grandfather's 80-year-old cousin, Augustus Aldrich, in 1970, sales of boiled cider were at an all-time low.

"Boiled cider was for ‘old-lady cooks,' ” Willis jokes. "They'd come and get a bottle because their husband shot a deer and they wanted to make mincemeat with it, or they'd grown up with it, but no one else wanted it."

Then things changed. Fifteen years ago, the interest in home cooking and baking began its resurgence. Access to the internet made specialty ingredients easier to incorporate into everyday cuisine; the demand for cider began to pick up. A new generation of epicures began to appreciate the many uses for boiled cider, beyond its traditional roots.

"You could say it was the millennials," says Willis, "or the boomers retiring – I don't know who's cooking more, but people cooking is what brought back the cider." 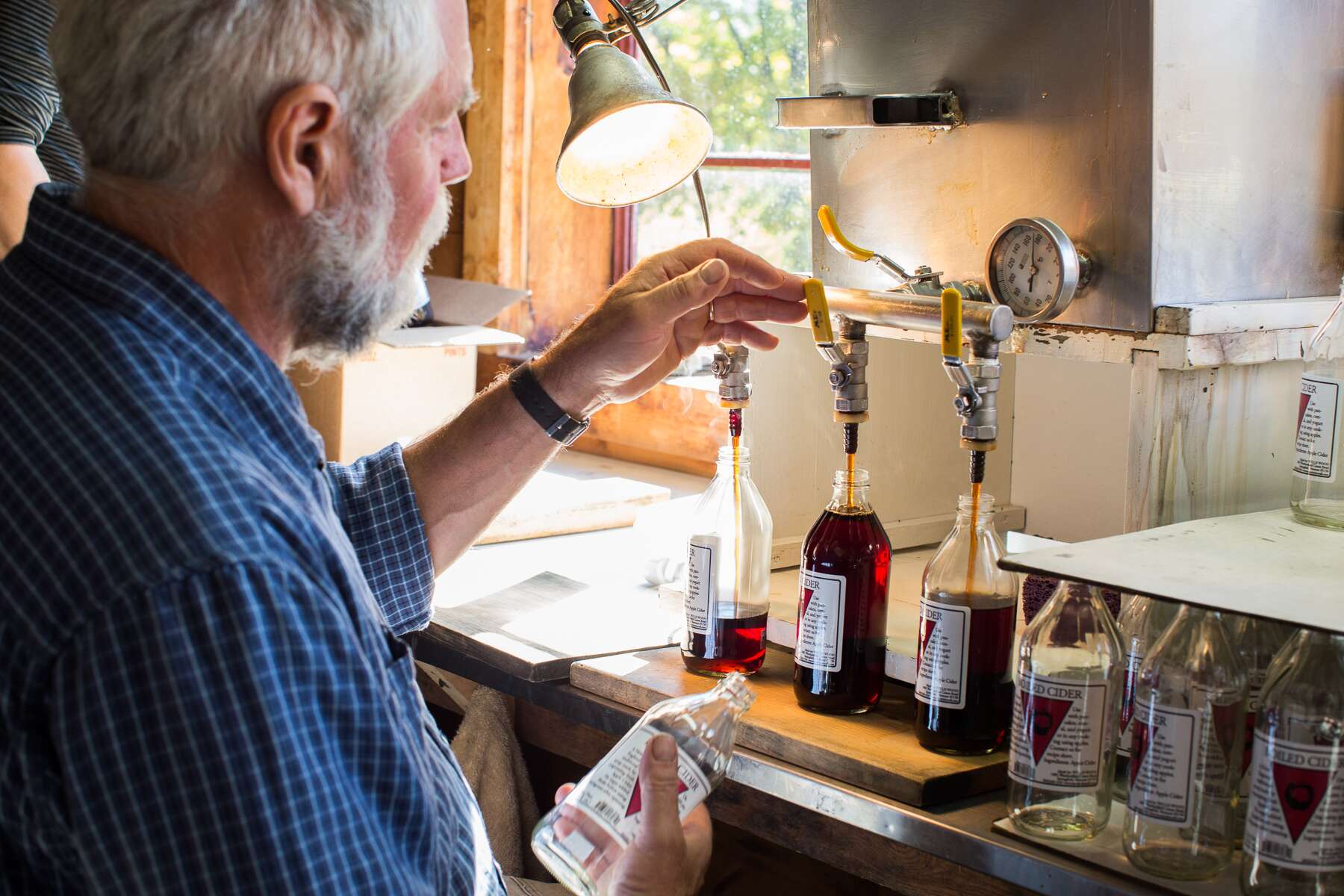 Boiled cider’s rich, concentrated apple flavor makes it a perfect pairing for many culinary applications: A few tablespoons of it in your favorite apple pie recipe elevates the filling, adding a complexity that the fruit alone can’t achieve. Its syrupy tang is an ideal sweetener for homemade muffins, and cocktail aficionados can turn to it as a flavorful replacement for sugar, adding nuance to autumn-inspired drinks.

Today, there are only two companies in Vermont making boiled cider commercially, and the Wood family is widely credited with keeping the tradition alive.

"There's some reason to change with the times, and there's some reason to stay the same and cross your fingers," says Willis. As boiled cider regains popularity, and bakers and cooks discover its potential, we’ll all be glad that the Wood family chose to take their chances, preserving this beloved-once-more regional food tradition. 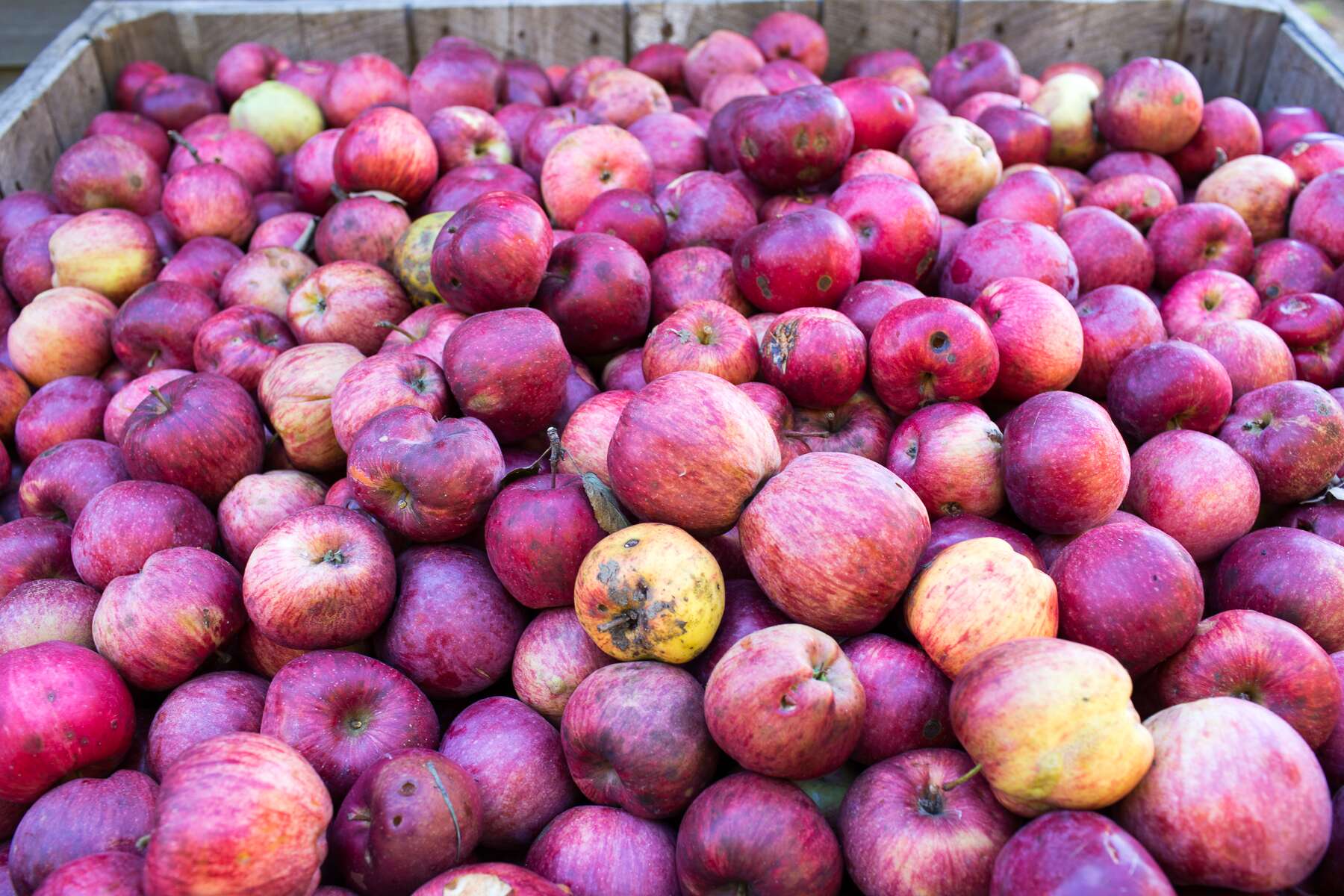 Boiled cider is so much more than a baking ingredient. Once you get to know it for the flavor powerhouse it is, you’ll find hundreds of ways to use it to amp up your recipes. Here’s a small sampling of ways we like to cook with it, courtesy of fellow employee-owner Susan Reid.

Toss diced parsnips, squash, rutabagas, carrots, turnips, and Brussels sprouts with 2 tablespoons each boiled cider and olive oil. Season with salt and pepper and roast on a parchment-lined baking sheet until the vegetables are tender and the edges are browned.

Boiled cider’s deep, concentrated flavor makes it an excellent mixer in all kinds of cocktails. Add it to your next Cape Codder for a cran-apple touch. Make a cider Moscow Mule, or add some boiled cider to your next batch of hot buttered rum, stirred with a cinnamon stick.

Combine 1/4 cup each boiled cider and whole-grain mustard. Brush over pork tenderloin or chops when roasting.

When mashing your next batch of sweet potatoes, add 2 tablespoons boiled cider with the butter, salt, and pepper for an extra dash of flavor. 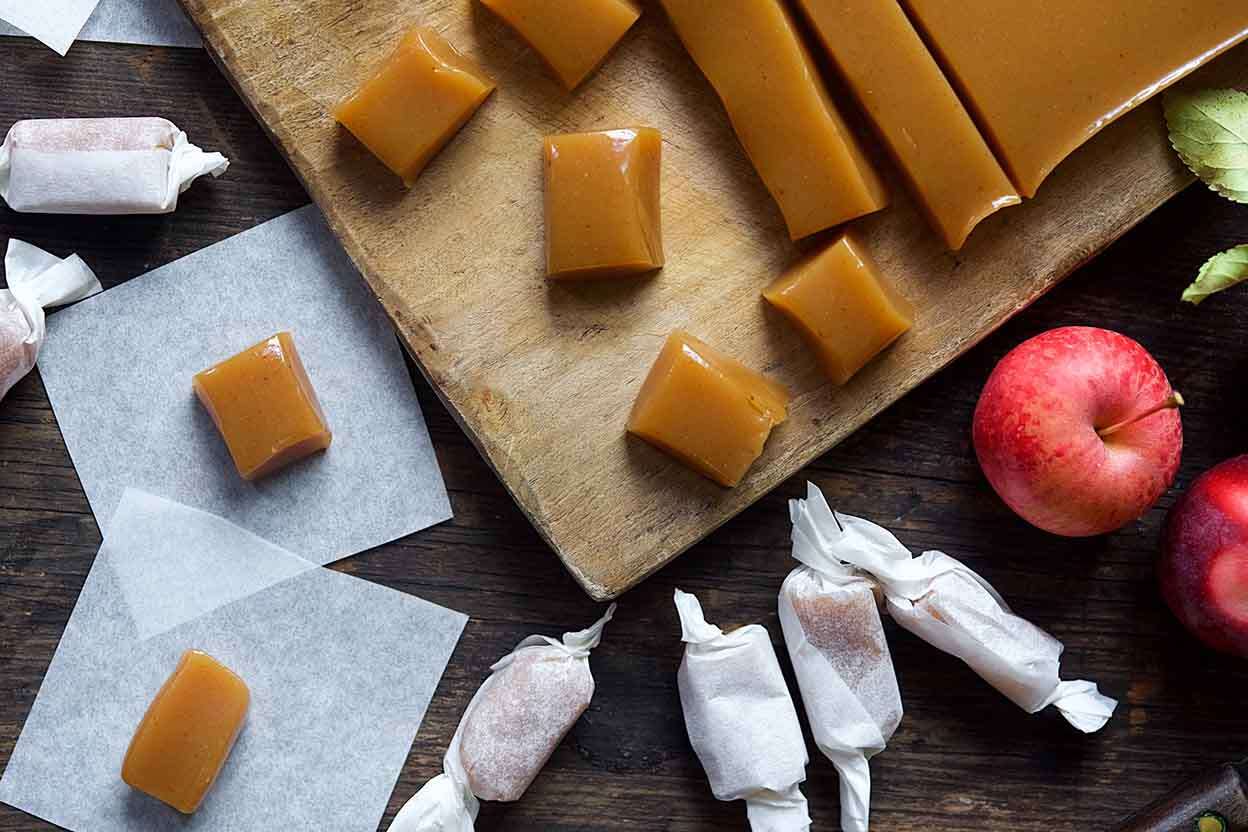 Apple pie meets caramel in these soft, chewy candies. When wrapped in parchment they're the perfect homemade treat to hand out on Halloween. The full Apple Cider Caramels recipe comes together in just 35 minutes.

Melt 1/4 cup butter with 1/4 cup brown sugar, a teaspoon of cinnamon, and 1/2 cup boiled cider. Stir until the sugar is dissolved. Pour over pancakes or waffles.

Add a splash of boiled cider to your next batch of squash-and-ginger soup or chicken curry for a touch of rich apple flavor.

Whisk together 2 cups confectioners’ sugar, 2 tablespoons boiled cider, and 1 tablespoon heavy cream (add more if needed for consistency) for a quick and tasty glaze to drizzle over cookies, cinnamon rolls, coffeecake, or muffins.

To make any of these tasty options and add more rich apple flavor to your baking, order your bottle of boiled cider today.

Can I use this as a sweetner for tea or coffee? If so, how much?
A bit of boiled cider in a cup of tea is delightful! We recommend adjusting the amount to taste, but you can start by using slightly more than the amount of sugar you'd add as it's less sweet than sugar by volume. We like adding between 1 to 2 teaspoons per cup of tea. The flavor tends to get lost in coffee, but you're welcome to give it a go if you're feeling curious. Enjoy! Kye@KAF
Is there any added sugar in the boiled cider? I am not talking about what happens naturally. If so how much, I would really like to try this product as it sounds fabulous but am afraid of sugar content.
Hi Barb. There's no sugar added! It's just apple cider that's been concentrated down into pure apple goodness. Annabelle@KAF
YOU GUYS!!! You could replace all or at least half the brown sugar from the King Arthur pumpkin loaf recipe with boiled cider! King Arthur flour posted the recipe a few days ago as the “the most versatile banana bread of year” but modified it as a fall loaf recipe. (I would also add nutmeg to recipe as the original one does not have it). That would be the most delicious harvest-themed loaf ever. You’re welcome. Haha
what is the shelf life of boiled cider?
If stored in the refrigerator after opening, the boiled cider has an indefinite shelf life! Kye@KAF
Where can I buey the Boiled Cider? I am in SC...
Hi Jan, the Boiled Cider is a specialty product that's available at our flagship location in Vermont or can be ordered from our website here. Good news: we're currently having a buy one, get one 1/2 off sale! (Valid until 10/23/17 11:59PM EST) Kye@KAF
I made the boiled cider at home. I used 1 gallon of sweet cider and got a tad over 1 pint of Boiled Cider. Used some in my apple crisp which was delicious! Will be trying some of the other recipes you have printed in the near future.