This is not your mother's whole wheat bread.

No offense to Mom, of course – but I'm guessing it's probably better than hers.

Did your mom make you PB & J sandwiches on homemade whole wheat bread?

If so, you may well have grown up with "back to the land" parents. This social movement, which took place mainly in the decade between 1965-1975, inspired many young people to leave their urban homes and migrate to rural America, where they were determined to live off the land: growing their own food, and generally living a sustainable lifestyle.

For some, this worked out. But many didn't realize the amount of backbreaking labor it takes to be a farmer/homesteader, and they ultimately settled into suburban life, with all its familiar comforts: running water, electricity, indoor plumbing, and supermarkets.

One particular pursuit seemed to stick, though: baking with whole wheat flour.

You could grow wheat, and grind it into whole wheat flour yourself. Thus whole wheat represented a DIY (do it yourself) culture that was satisfying to dream about, but in the end hard to sustain.

Still, the reverse migration from farm to bedroom community didn't completely squelch those back-to-nature aspirations. And all those whole wheat recipes you'd collected... no need to abandon them.

Which is the reason you may be a 40- or 50-something who grew up eating PB & J on kinda dry and crumbly homemade whole wheat bread.

Well, times have changed. Over the past 40 years we've learned a lot about baking with whole wheat flour.

We've found, for instance, that substituting orange juice for some of the water in a whole wheat bread recipe tempers any potential strong flavor in the wheat.

And that whole wheat dough shouldn't be kneaded as long or vigorously as dough made with all-purpose flour; whole wheat's bran particles are sharp, and can potentially cut the developing gluten strands if the dough is handled roughly.

But the very best thing we've learned about whole wheat flour is that there's a tasty new variety out there, one that was born just 20 years ago: 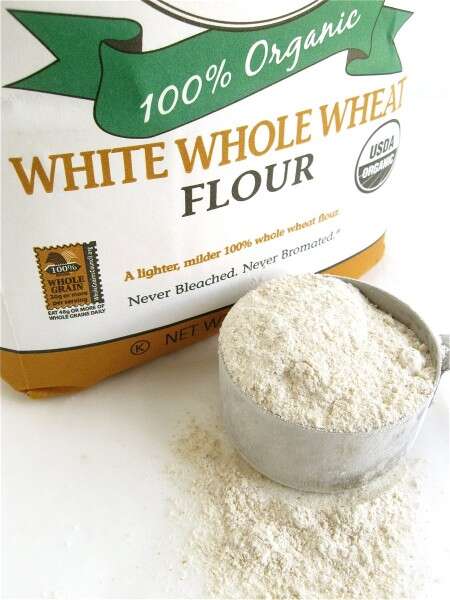 Nutritionally, none. But as for taste and color – quite a bit.

Wheat grown in America has traditionally been high-protein red wheat. It's dark tan in color, and often somewhat gritty feeling in texture. You'll recognize it as the whole wheat flour you grew up with – if your mom was one of those attentive moms intent on feeding her family whole grains.

About 20 years ago, we received a sample of a new flour, white whole wheat flour, from a consortium of farmers in Kansas (now known as The American White Wheat Producers Association). This new flour was milled from a hard, high-protein wheat, effectively the same strain as red wheat. But it was lighter-colored than red wheat. And after we'd baked with it, we knew we had something really exciting on our hands.

Please understand, right up front: both red and white whole wheat flours have the same nutritional value. White wheat isn't bleached; nor have any of its integral parts (germ, bran, or endosperm) been eliminated.

After all, we know that the real litmus test is this: can you sneak whole wheat flour into your baking without your family knowing it?

With white whole wheat flour, the answer is a resounding yes.

Bottom line: White whole wheat flour is nutritionally equal to red whole wheat flour. But it bakes up lighter colored; often lends lighter texture to breads; and for most of us, it simply tastes better.

Keep in mind, white wheat flour is still whole wheat flour. Because of its bran, it's more of a challenge to make a light-textured, high-rising loaf.

But it can be done – as this cinnamon-swirl loaf demonstrates. 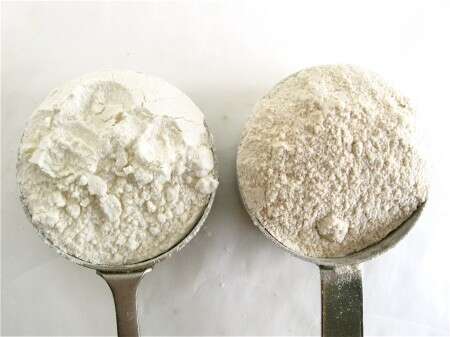 On the left, all-purpose flour. On the right, white whole wheat flour. Little difference in color, or taste.

So, let's get started – with a starter. No, not sourdough; an easy mixture of flour, water, and a small amount of yeast.

We find that a simple overnight starter both enhances bread's flavor AND its keeping qualities; the short amount of "extra" fermentation raises the bread's acidity level just enough that it stays fresher longer.

So, step #1: Combine the following in a mixing bowl large enough to hold the entire recipe of dough:

Stir until the flour is evenly moistened (photo, upper left). Cover the bowl, and let the starter rest overnight at cool room temperature, for up to 16 hours or so; it'll become a bit puffy, and flatten out (upper right).

Add the following ingredients to the bowl with the starter:

Why use OJ at all? Because, while it doesn't add its own flavor to the bread, it'll mellow any potential bitterness in the whole wheat. Don't bother heating it to lukewarm; you can use it straight out of the fridge.

The amount of liquid you use to make the "perfect" dough will vary with the seasons. Flour is like a sponge; it absorbs water during the humid days of summer, and dries out during the winter. Your goal should be making the dough as it's described (e.g., cohesive, soft but not sticky), rather than sticking religiously to the amount of liquid.

Mix and knead – by hand, mixer, or bread machine – until you've made a cohesive dough.

If you're kneading bread by hand, it's tempting to keep adding flour until the dough is no longer sticky. Resist the temptation! The more flour you add while you're kneading, the heavier and drier your final loaf will be. Note that 100% whole wheat dough will never become smooth and supple like dough made with all-purpose flour; it'll feel more like clay under your hands, and may appear a bit rough.

If you're using a stand mixer, knead at low speed for about 5 to 7 minutes. 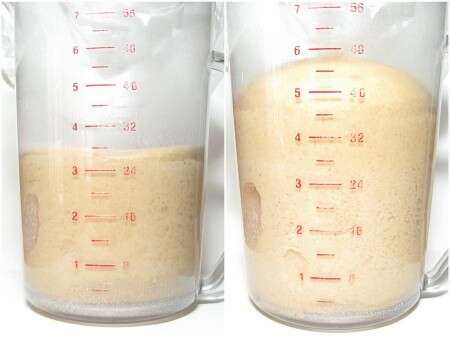 Place the dough in a lightly greased bowl (or 8-cup measure, as I've done here), cover it, and allow the dough to rise until it's expanded and looks somewhat puffy (though not necessarily doubled in bulk), about 90 minutes.

And as for rising times, here's a good general rule for yeast bread: Let the dough rise to the point the recipe says it should, e.g., "Let the dough rise until it's doubled in bulk." Rising times are only a guide; there are so many variables in yeast baking (how you kneaded the dough; what kind of yeast you used) that it's impossible to say that bread dough will ALWAYS double in bulk in a specific amount of time. 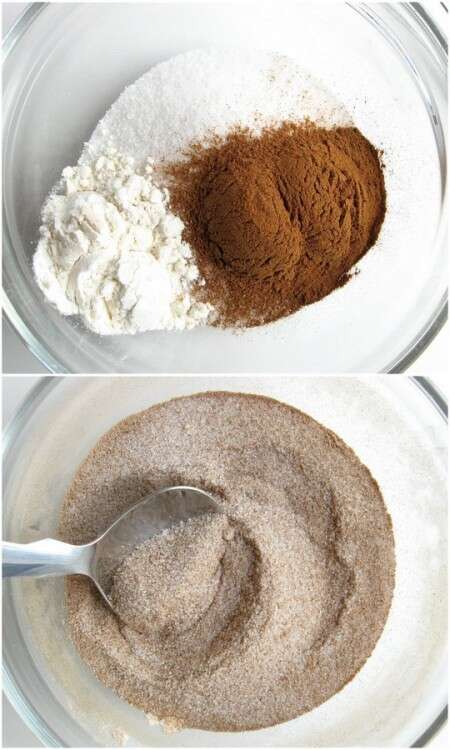 Next, make the filling. Mix together the following: 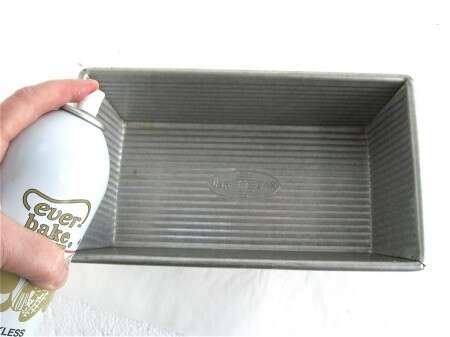 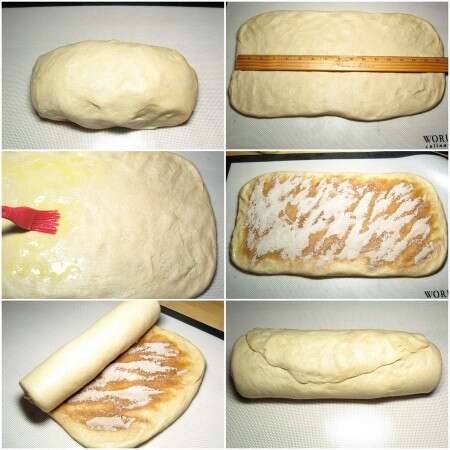 Gently deflate the dough, and transfer it to a lightly oiled work surface; a silicone rolling mat is a help here. Shape the dough into a long, thin rectangle, about 16" x 9".

Beginning with a short edge, gently roll the dough into a log. 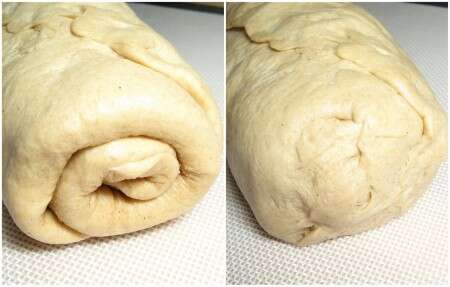 Pinch the side seam and ends closed. 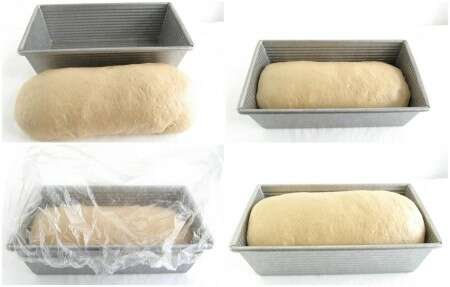 Pat the log gently to shape it into a smooth 9" cylinder, and place it in the prepared pan. Cover the pan (a shower cap works well), and allow the loaf to rise until it's crowned over the rim of the pan by about 3/4", about 90 minutes. 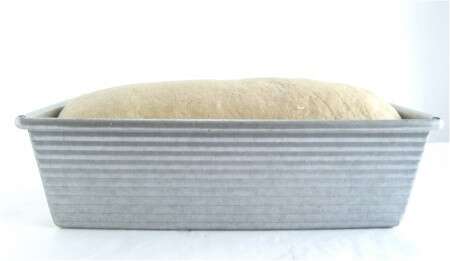 Don't let it rise too high; it'll continue to rise as it bakes. 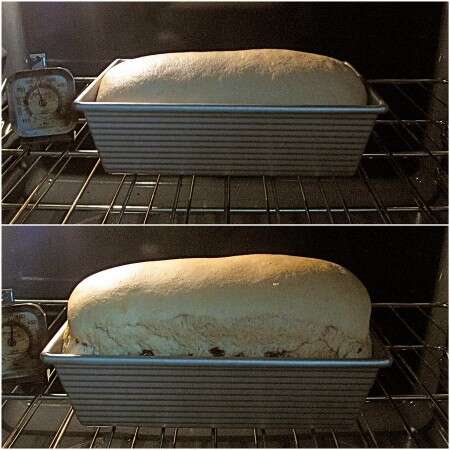 Bake the bread for 10 minutes. It may rise quite precipitously, as mine did here.

Lightly tent the bread with aluminum foil, and bake for an additional 40 to 45 minutes, or until the center registers 190°F on an instant-read thermometer. 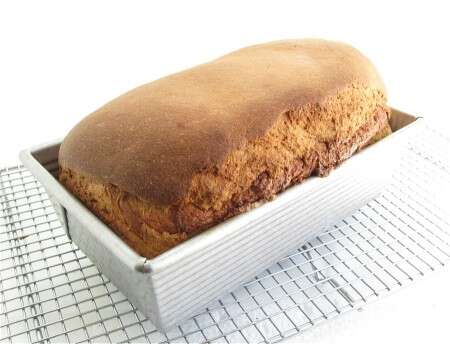 Remove it from the oven... 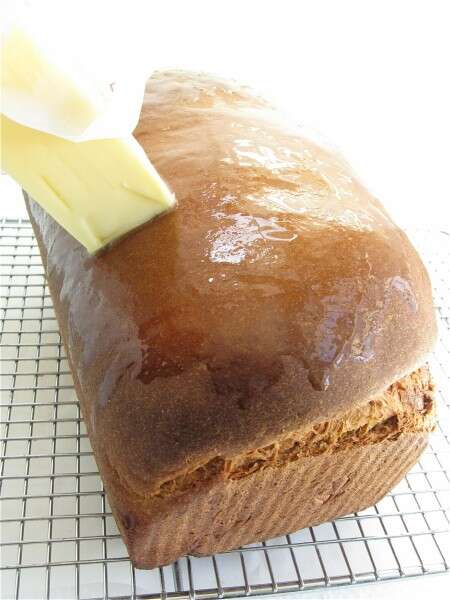 Run a stick of butter over the top of the hot loaf, if desired, for a softer crust. 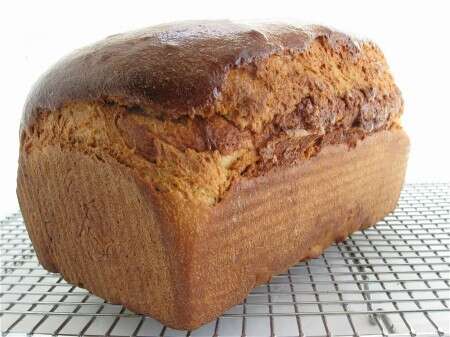 See this "shred" on the side? This sometimes happens when bread rises very quickly in the oven, and the crust doesn't expand as fast as the interior.

It's not pretty, but hey, gives it kind of a rustic look, don't you think? 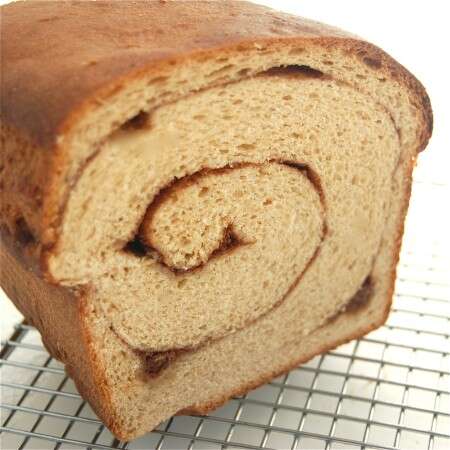 Allow the bread to cool completely before slicing. 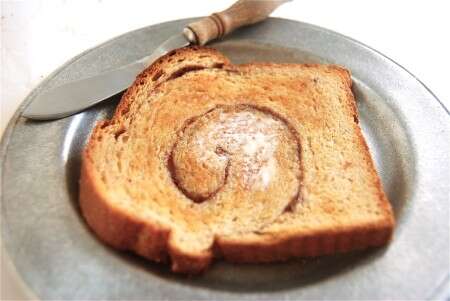 And neither will your family. 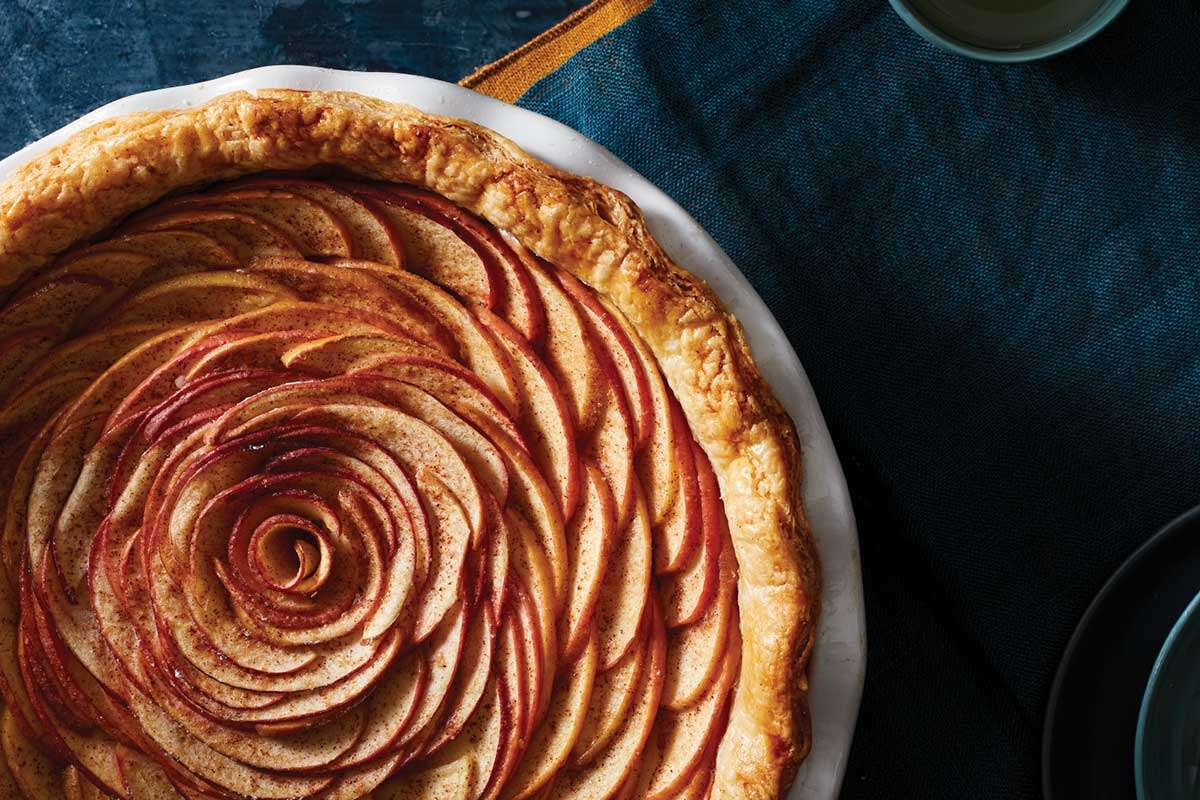 Can I skip the potato? I checked it out in the store, and the potato flour may contain traces of nuts (same brand also makes an almond flour).
Oops, forgot to mention that we have the small bread maker, so we'll finish it within a day.
Holly, the potato flour really is a key ingredient in making this dough soft, tender, and stay fresh. If you can't use potato flour, look for instant potato flakes at your local grocery store. You'll likely be able to find that brand that works for your needs, and your bread will be so much better off because of it! Good luck. Kye@KAF
I have made this recipe twice now, and both times it did not rise in the oven. Everything else went well, but it was a small loaf, only as tall as it was when I put it in the oven. It tasted good, though. Any ideas on why it didn't rise?
The whole wheat flour itself can be a culprit as the sharp bran edges can cut the gluten strands, making a dense loaf of whole wheat bread. When you assemble the dough, you might use half the whole wheat flour as listed, along with all the other ingredients. Let this rest for 20 minutes before adding enough of the rest of the flour to make a soft and supple dough. You might not use all the flour, as the rest will help the whole wheat absorb some of the liquid and the bran will soften, creating a loftier loaf. If this method doesn't work, please call our baker's hotline at 855-371-2253 and working together we'll troubleshoot the next whole wheat loaf. Happy baking! Irene@KAF
Oh my goodness.....this recipe is fabulous.....I've been making it for 4 weeks now, we average a loaf or two a week. I've tried other cinnamon bread recipes but this one never leaves me stranded on ease of mixing, rising and taste!! It sets the bar to never wanting to buy store bought any longer, I'd rather go with out!! I used a loaf as a gift for the local town barber who messaged me and said that the bread and a cup of coffee in the morning was enough to get their day started!!!!! ;) thank you, thank you
My starter developed a hard crust on top. The bottom is puffy. Is it still good?
Hi Julie, As long as your starter is not pink or orange and has no visible mold or fuzz, it should still be good to go. Be sure it's well covered, the top may be drying out from exposure to air. ~ MJ
The recipe is wonderful but I had some issues with my dough. I mixed it in my bread machine and it was so light and flexible...I have never seen whole wheat dough being like that. Then I made a roll, put it in a bread loaf and in about 30 mins my bread looked like it was ready to be baked. I though 30 mins wasn't enough so I waited for another 30 mins and at that point the bread was over proofed. it collapsed in oven but still was very light and tasty. Not sure why my dough raised so fast. I live in FL.
Would you be able to give instructions for how to bake this bread using the Zojirushi bread machine?