This triple play is a homerun!

You know, I used to be afraid of deep-frying.

Vats of boiling oil. I mean, doesn't that sound like some form of medieval torture? Just the thought of it gives me the heebie-jeebies.

Still, if you want homemade doughnuts...

"Leave the kitchen, kids! Get out from underfoot, there, puppy dog. Cat: off the counter. Mama is making doughnuts!"

Hmph. Makes me want to don my hazmat suit.

Heck, it isn't as if I've never heated a pot of oil. At one time or another, I've made Jelly Doughnut Holes, Classic Beignets, Vermont Doughnut Holes, Mashed Potato Doughnuts, Fried Dough...

No french fries – yet. But I'm considering them.

Still, even with my favorite shallow-frying method (1" of oil in an electric fry pan), doughnuts are a production.

Unless they're BAKED doughnuts - and then they're just about as easy as muffins.

And versatile. I started thinking about all the different things you could do with baked doughnuts.

All of which we're going to try out in the recipe below.

"Into the kitchen, kids. C'mon, puppy dog. Cat, you can sit right there next to the toaster. Mama's going to bake doughnuts."

Can you make these baked doughnuts without pans?

Sorry, but no. You can, however, make Doughnut Muffins - same batter, different shape, just as yummy. 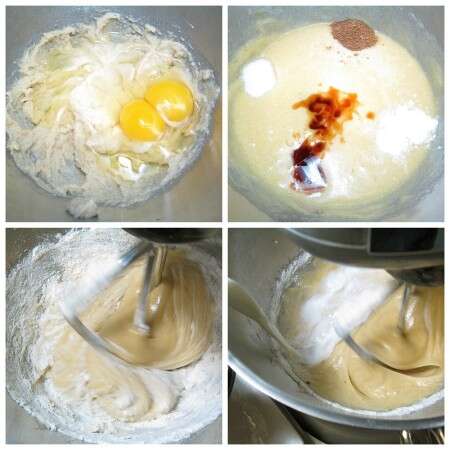 Mix the following until smooth:

*Use the smaller amount of nutmeg for coconut or chocolate chip doughnuts; the larger amount for cinnamon doughnuts. 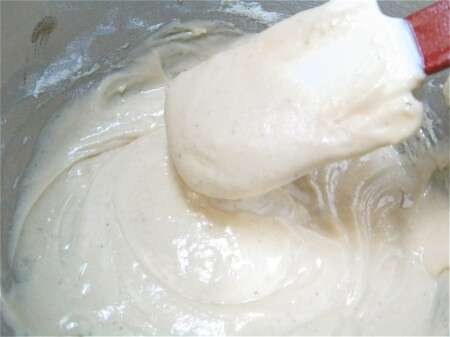 The batter should be smooth and glossy. 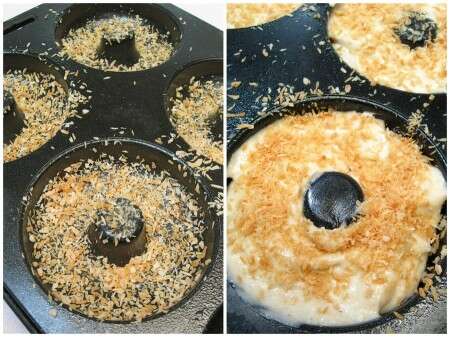 Sprinkle 2 teaspoons toasted coconut into each of the wells of the doughnut pans, shaking the pans to distribute the coconut.

Divide the batter evenly between the pans, filling each well to within about 1/4" of the rim. Sprinkle the top of each doughnut with an additional 2 teaspoons toasted coconut.

Can you use plain instead of toasted coconut? Not really; it browns unevenly, and doesn't produce as good a result. 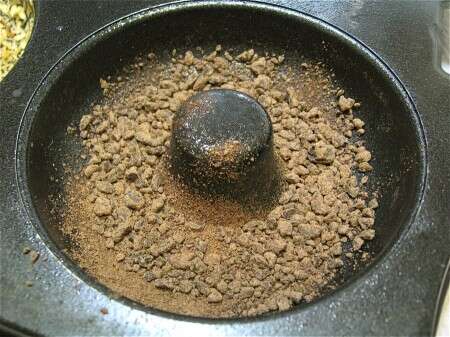 "Make mine plain," you say? Just spoon the batter into the wells of the prepared pans, filling to within 1/4" of the rim. 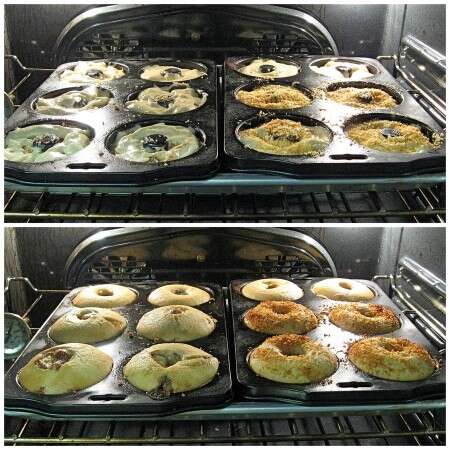 Bake the doughnuts for 10 minutes.

What are those lava-like doughnuts on the left? My attempt at making streusel stuffed doughnuts. They tasted pretty good, but boy, what a mess... plus it was a pain trying to spoon just a little bit of batter into the doughnut pans, add the streusel, then cover with a little more batter. Not worth the effort, IMHO.

Remove the doughnuts from the oven; wait 5 to 7 minutes before turning them out of the pans onto a rack. 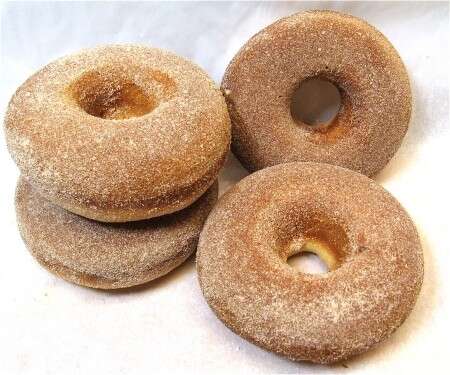 For cinnamon doughnuts, shake warm doughnuts in a plastic bag with about 1/4 to 1/3 cup cinnamon-sugar. 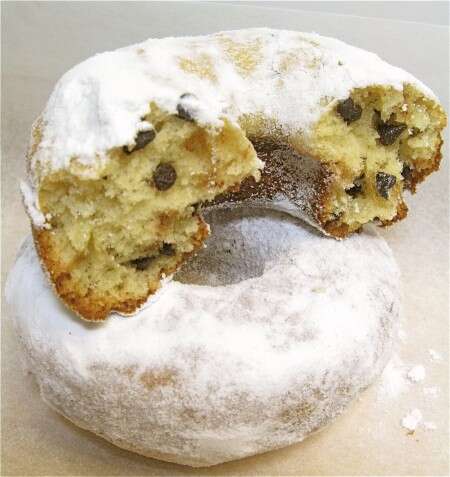 For sugar-coated chocolate chip doughnuts, shake doughnuts in a plastic bag with about 1/2 cup non-melting white sugar (for best results), or confectioners' sugar. 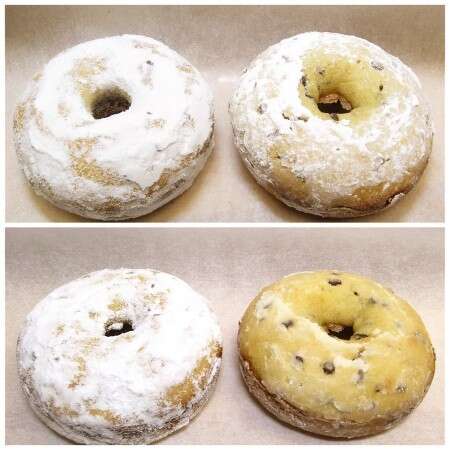 Here's what I mean by best results: on top, that's non-melting white sugar on the left, confectioners' sugar on the right. Both look fine.

But by the next day, look what's happened to the confectioners' sugar: gone, melted into the doughnut. While the non-melting sugar still looks great. 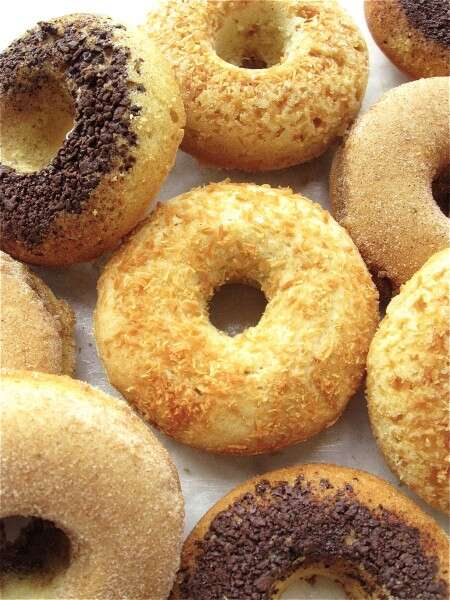 And here are those chocolate "frosted" doughnuts. See why I say these are "frosted?" The chips don't melt; they just soften. Still, the final effect is mighty tasty!

Is it possible to make doughnut holes with this recipe?

Yes Zeezee! Just be sure to reduce the baking time for those cute little bites of donut magic. For most donut holes, just 8 to 12 minutes will do the trick.

Good recipe! These are not as good as doughnuts fried in oil, but the end result is as good as it gets from a baked product. It’s easier to pipe the batter from a disposable pastry bag than to spoon it into the doughnut pan(s).

Has anyone tried tossing the freshly baked donuts into an air frier to crisp them up? I don't have one, but am interested in getting one.

Hi Stephanie! That's not something we've tried but maybe another baker reading through this comment section will have some insight on this one. It's definitely an interesting idea!

Used my new donut pans 1st time today using this recipe. So easy and so much fun! I’m really proud of them. Also used the chocolate glaze recipe. These are for my husband to take to work tomorrow.....oops! There are only 11 now!
A good cook always tastes the end product before serving, right?

I got the small donut pans, and wonder how long to cook them ?

We'd check them at about 7 minutes, Carol. Happy baking!

Made them today, easy to make and they came out great. Really enjoyed this recipe and was a hit with the family.

Is there anyway the donuts can be par baked then fried quickly to get a crispier outside texture or fried quickly first then finished in the oven? I have previously made the batter, put the donut pans in the freezer for 15 minutes, then lifted them out and fried them and they come out beautiful but I miss the softer, lighter cake inside when I do that like I get with baking.
Thanks!!