Remember Zwieback toast? The yellow Nabisco box, the little blonde boy with his ’50s comb-over (love that Brylcreem!), chowing down on one of those crunchy, golden oval toasts?

Well, memories are all you’ve got; Nabisco ditched Zwieback toast last year. Sad but true, those ultra-light, barely sweet toasts, perfect for teething babies (and sentimental adults reliving their childhood) are now a thing of the past.

Fear not; I’ve found a zwieback recipe, and will be sharing it with you here in the near future. But in the meantime, finding myself in desperate need of something crunchy (but not hard); sweet (but not ooey-gooey); and sized for babies (albeit featuring cinnamon rather than strained peas), I opted for these Baby Biscotti.

You’ve seen biscotti in this space before. My motto is, when you’ve got a winner, keep flogging it. And biscotti are truly one of my favorite cookies.

Why? Because they’re no harder to bake (read: easy) than standard drop cookies. Because they’re sturdy, and last FOREVER. (Need a cookie to send to your kid at college, or your serviceman overseas? Here it is.) Because you can flavor and enhance biscotti any way you please (cranberry-walnut-orange with a chocolate dip, anyone?). And because they have that certain air of elegance; that, “Wow, how did you make these fancy cookies?”

To which you can reply, modestly and with eyes downcast, “Oh, it was nothing…”

…and be telling the truth.

Are you a vanilla-type person? Try our favorite basic vanilla biscotti, nearly zwieback-like in its simplicity. If you’re more adventuresome, and your tastes run to Starbucks rather than the 79¢ cup of joe at the Qwik-Mart, then you might enjoy our hazelnut-cappuccino-espresso enhanced biscotti (with, yes, a chocolate dip).

Or, if you want to feel virtuous with every bite, try these whole-grain cinnamon chip Baby Biscotti. They’re well beyond zwieback as far as complexity of ingredients, but just as nice to nibble on. 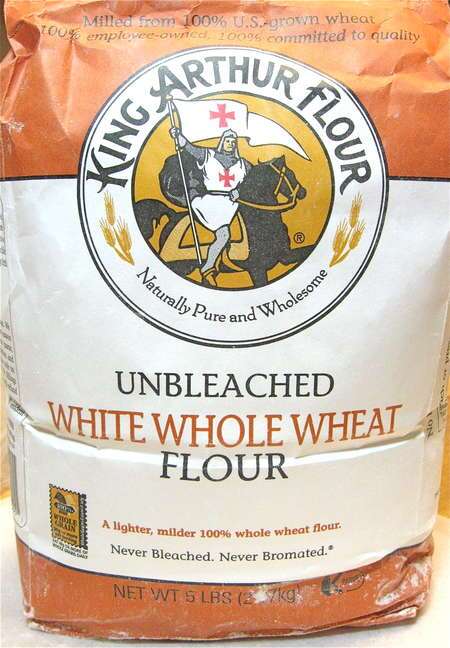 Whenever I'm baking with whole wheat, I automatically reach for my King Arthur white whole wheat. It's got all the nutrition, minerals, and vitamins of traditional whole wheat flour, (milled from red wheat), yet it has a lighter, milder flavor—perfect for those of us who don't embrace that strong, tannic whole-wheaty flavor. 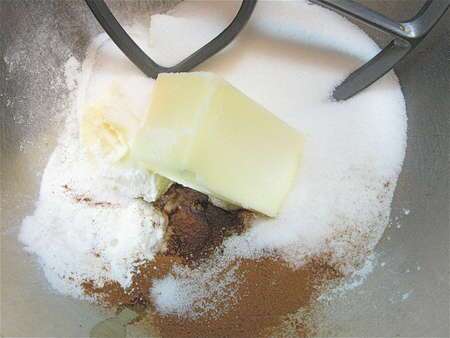 Butter, sugar, baking powder, cinnamon, salt, and vanilla—sounds like cookies in the making, eh? Indeed, biscotti are nothing more than Continental-style cookies; so don't shy away from them. 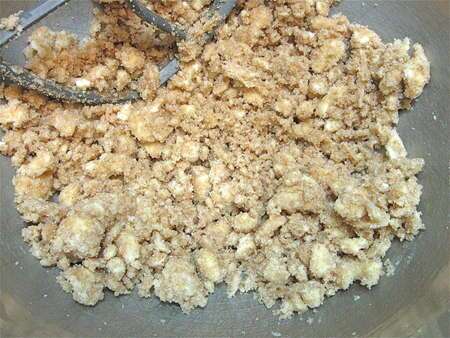 Mix till smooth. This isn't smooth. 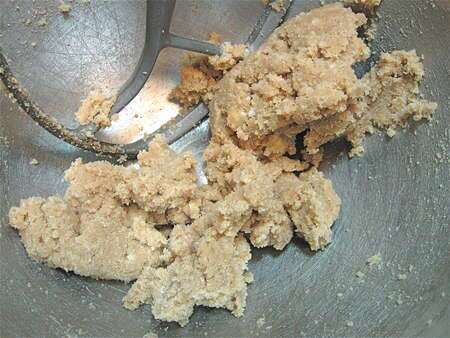 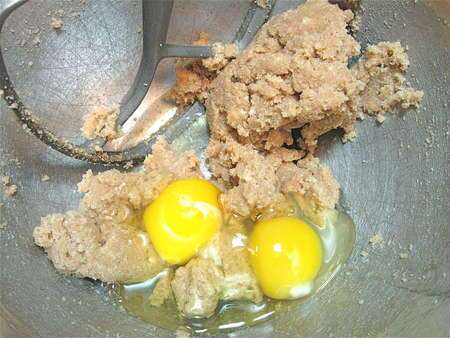 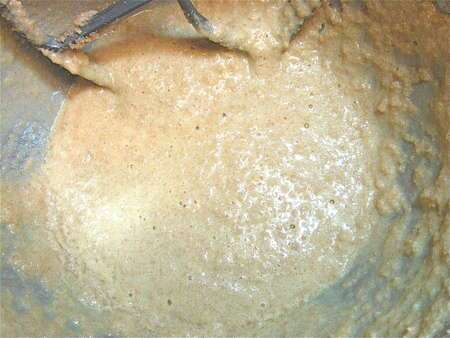 ...and mix again till well combined. The batter will be a little lumpy, kind of coagulated-looking; that's OK. 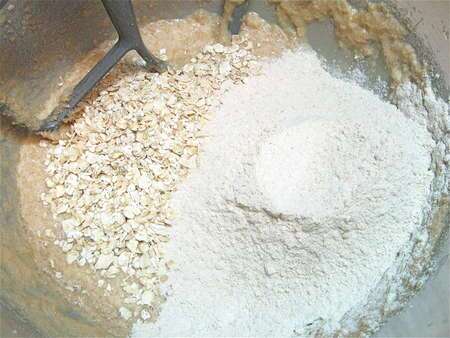 Add the white wheat flour and oats, and mix till thoroughly combined. NOW the batter will be smooth, aside from the oats. 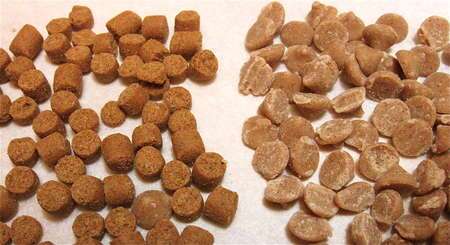 Now you have your choice: cinnamon Flav-R-Bites (masquerading as pet kibble) on the left, cinnamon chips on the right. What's the difference? Flav-R-Bites are sugar- and grain-based, taste strongly of cinnamon, and bake up fairly crunchy. Cinnamon chips are sugar- and oil-based, with a more mellow cinnamon flavor. They bake up soft. Which will be better in these biscotti? Read on... 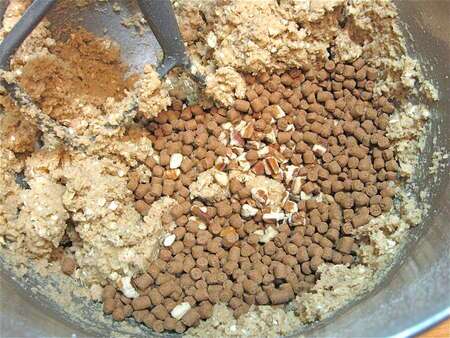 Add the chips of your choice—as you can see, I chose the Flav-R-Bites—and nuts. 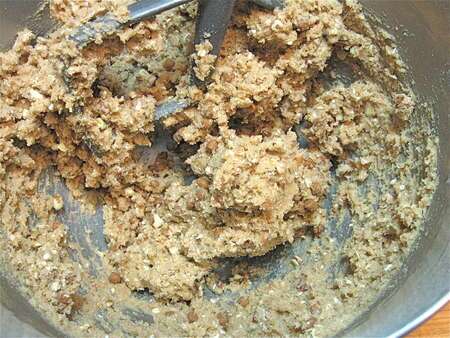 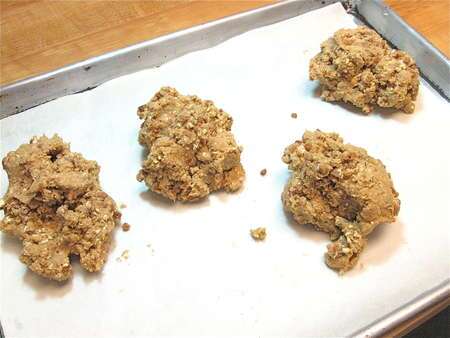 Divide the dough into four equal pieces, and place them on a lightly greased or parchment-lined baking sheet. 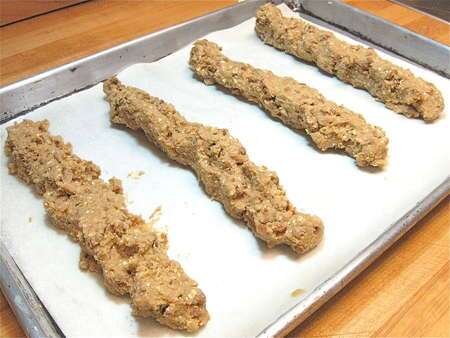 Wet your fingers, and stretch the sticky logs till they're about 10” to 11” long. 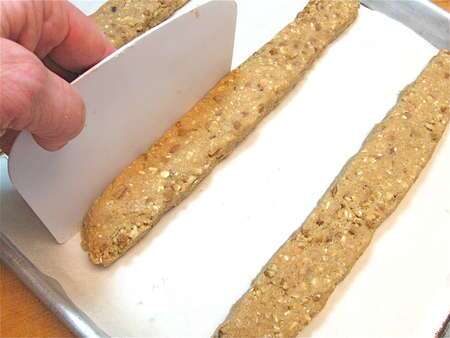 Using a wet bowl scraper and your wet fingers, smooth them into logs about 3/4” tall, and about 1 1/4” wide. 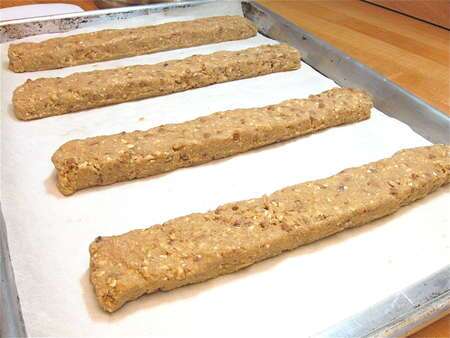 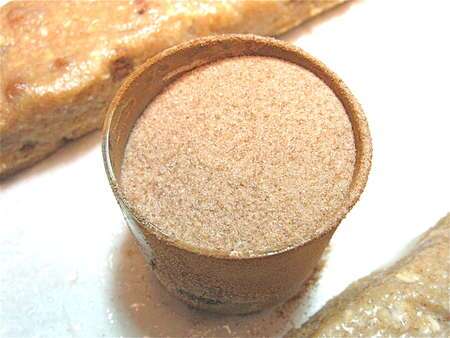 Next, get out your cinnamon sugar. I use our Cinnamon Sugar Plus. It's made with extra-fine sugar, making it easy to sift into a very even layer atop the biscotti; and Vietnamese cinnamon, whose higher oil content gives it bold, lasting flavor. 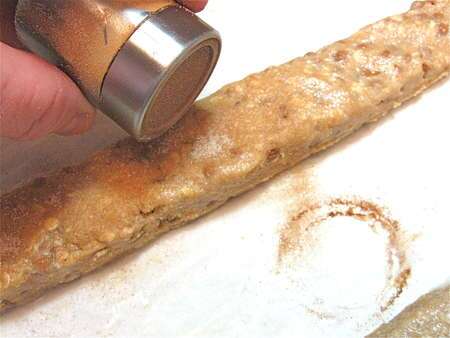 Spray your logs with water, and sprinkle with cinnamon-sugar. 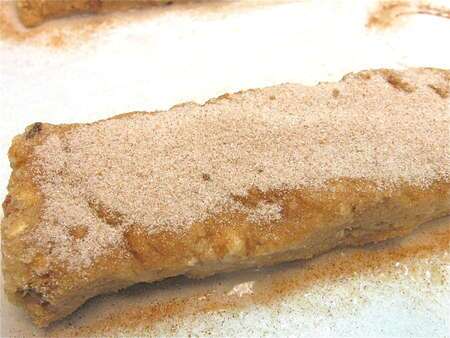 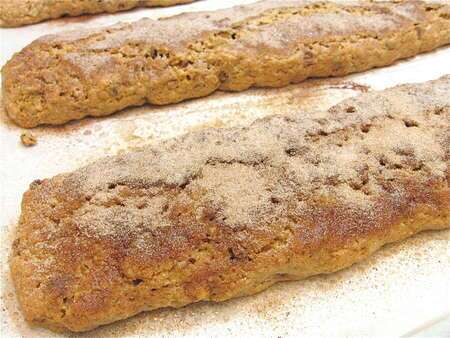 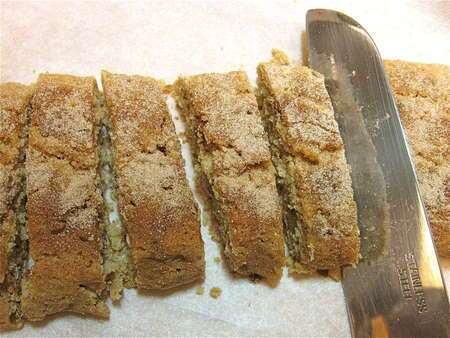 Use a sharp chef's knife to slice the biscotti crosswise, making 1/2” to 3/4” wide slices. This is a change from the usual “slice diagonally with a serrated knife” method. Since you're cutting crosswise (to make short biscotti) rather than diagonally, they're small enough to cut easily in one fell swoop, no sawing needed. If they seem to be crumbling a lot, let them cool a bit longer. 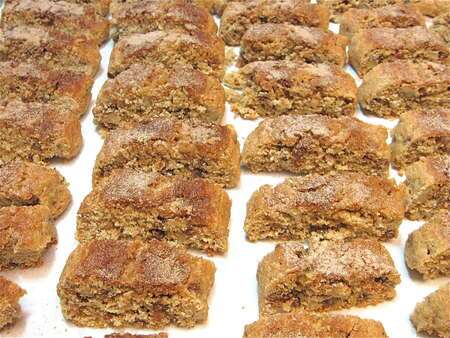 Line them up on the baking sheet they originally baked on. You can place them close together. 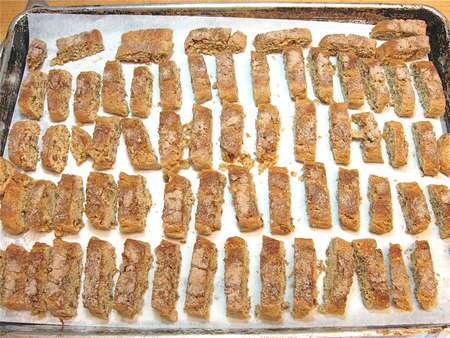 Like this. They're not the most gorgeous, perfect-looking biscotti, due to the coarser whole wheat flour and the chips and nuts; but remember, beauty is only skin deep. 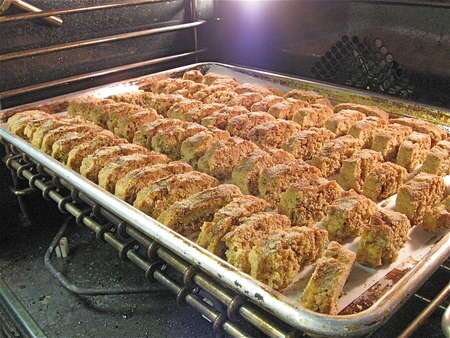 Reduce the oven heat to 325°F, and bake the biscotti for another 25 minutes or so. 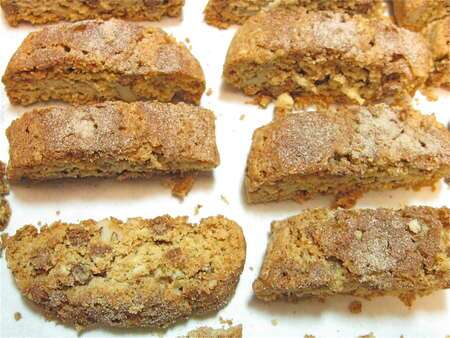 Their cut surfaces will be starting to brown, like the one at lower left. Again, let them cool right on the pan. 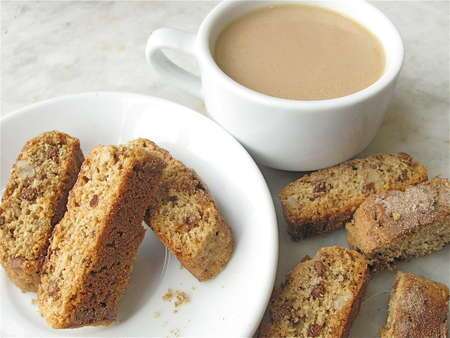 Biscotti and cappuccino—a marriage made in heaven.

So, let's not forget our cinnamon Flav-R-Bites vs. cinnamon chips test—which should you use? The Flav-R-Bites are really quite crunchy. If you're someone who likes chewing ice cubes and the like, you won't mind the crunch, and will love the assertive flavor. If you like a softer chew, choose the cinnamon chips.

Love to bake and to read recipes. Great blog. Have not seen zwieback in Va. stores for many years. Have made biscotti, but no nostalgia attached like when we used to give the baby a zwieback and eat two or three ourselves. Admit it. They were the bomb.
These are fabulous with the Flav-R-Bites, but my first 2 batches were with white chips, and they were fabulous too. I'm up to double batches since they go so fast.
After reading this blog, I ordered the Flavor-R-Bites, made the baby biscotti and just love them. They take care of my "guilt mode"! I just had two with an espresso for my afternoon snack.
I have made several different types of biscotti and loved them all, but these baby biscotti are my babies' favorite! I made them 2 weeks ago, and they are still fresh. I find that they are so good that I am satisfied with the smaller portion, and I like giving this healthier version of cookies to my kids. They prefer these whole grain cookies far more than any I can buy. Thanks for the great recipes, tips and blog!
I discovered King Arthur Biscotti three years ago in the pages of the Cookie Companion and have been baking them ever since! Always fabulous! I love how I can totally depend on King Arthur recipes to never fail.
The recipe looks great! I'm lactose intolerant, however. What could I substitute for the butter that doesn't have transfat in it? Thanks! You could substitute 1/3 cup vegetable oil, Fran. That should work. Also, you might want to try our recipe for Chocolate Chip Mandelbrot, which is an oil-based twice-baked cookie, very similar to biscotti. Enjoy - PJH
I am locally known as the biscotti queen - baked over 100 dozen large ones last fall for a charity event. Here's my trick: when the biscotti come out of the oven, let them cool completely. Do NOT slice warm. At this point, you can stash these large logs anywhere for a few days, or until you are ready for the second baking (I kept mine in the oven for 2 days, while away). When you are ready for the second baking, spritz the tops lightly with water, not too much, but enough to soften the crust just a tad. Now slice either crosswise or on a diagonal, but you MUST use a serrated knife. (I am fortunate enough to have my grandmother's bread knife which has very fine teeth.) They will slice beautifully, look professional, with few crumbs. Lay them flat, close together, on a cooling rack over a cookie sheet (allows more even browning) and bake them the second time. Works like a charm. And I wish I could remember where I heard the water spray thing, but it's likely it was here - KA's blog is the BEST, and where I always turn for help. Susan - I like the idea of waiting to slice when you are ready for the second baking. And I especially like the tip to put a rack onto a cookie sheet for the 2nd bake. Thank YOU, Biscotti Queen! Elisabeth @ KAF
OMG I am so upset those were the very best zwieback ever. That is what we always used for the crust of our cheesecake recipe that I inherited from my grandmother she had made it for over 60 years. Looking forward to your recipe I have a couple but not the same as theirs. Working on it, Annee - today's version wasn't quite sweet enough, and needed a touch of nutmeg. Should be posted in a week or so- PJH
If I wanted to make a soft biscotti, would I just skip the second baking. I would love to make these for the grandchildren, but need them to be a little softer. Thanks. Absolutely - just skip the second baking, they'll be cakey rather than hard. Enjoy - PJH
Hi everyone! What a great recipe! And I have to agree...biscotti lasting more than a day? HHHmmmmm....NEVER IN MY HOUSE! HA! I want the "Lemon" biscotti recipe. Is it on the KAF recipe list? I'll check it. However, did you know that the word, "biscotti" is just the generic term for "cookie" in Italian? It doesn't necessarily mean the cookies we are talking about here, or the cookies everyone thinks of as "biscotti" - long and cut on an angle. Just a bit of information for you. I'm off to find the "Lemon" recipe and give it a try! Keep up the good work KAF! You know I think the world of all of you! xoxoxo Thanks for your seal of approval. There is a Lemon-Almond Biscotti recipe on our website. Happy Biscotti, Happy Baking! Irene at KAF