Overnight French Toast is the way to go

Bread pudding. Strata. Breakfast casserole. Do these words speak to you? If not...

How about French toast?

In reality, these are all basically the same dish. Bread pudding is usually sweet; strata, savory. A breakfast casserole can be both: salty bacon, chunks of sweet apple. But they all have one thing in common: bread soaked in milk and eggs, and baked into a creamy, no-stress breakfast (or brunch) for a crowd.

Since you assemble this dish the night before, then stick it in the fridge and bake the next morning, it’s perfect for Christmas morning. Or for any chilly morning in late December, whatever the holiday you choose to celebrate. Including a salute to the winter solstice, one of my personal favorite days of the year.

We’re all familiar with French toast. Soft, eggy bread, hot off the griddle, with a hint of nutmeg and a dash of cinnamon—makes a delicious mental picture, doesn’t it? Add melting butter and warm maple syrup, and there you have it: the antithesis to cold cereal.

But, like pancakes, like waffles, French toast involves standing at the stove minding the fry pan or griddle. And eating in shifts. Or staging cooked toast in the oven, where it gradually becomes limp and dry as you patiently cook enough for everyone to sit down and eat together.

Most recipes for baked French toast are just that: slices of bread bathed in egg and milk, and baked. But this one combines the flavors of French toast with the style of bread pudding or strata: cubes of bread tumbled together, soaked in milk and eggs, scented with spices, baked, and served by the soft spoonful.

Everyone eats at once. And everyone becomes a member of the Clean Plate Club, since each person takes as much (or little) as they like; no need for finicky eaters to endure an entire slice. 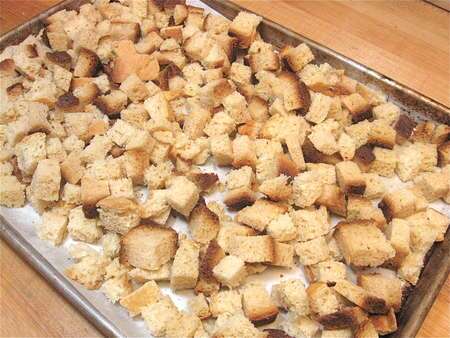 First, you need about 12 cups (about 20 ounces) of cubed bread, cut in 3/4” or so cubes. If you bake your own bread, this is a typical loaf using 3 cups of flour and about 1 cup of liquid. I like white bread; use oatmeal, whole wheat, or whatever you like, but understand that the French toast will taste like whatever bread you use; so if you're just trying to get rid of a loaf of whole wheat because you don't care for it... feed that bread to the birds, and use something tasty!

Spread the bread cubes on a pan for about an hour, or for up to a day. They don't have to be stale, but it helps to air them out a bit so they don't become totally soggy in the milk in which they'll be soaking. 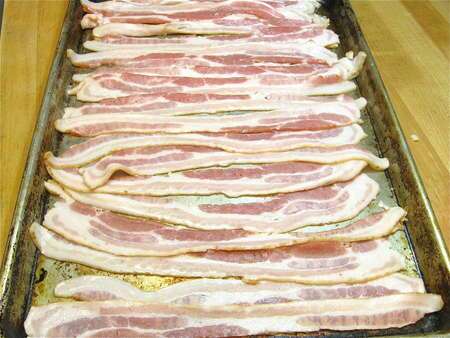 Next, cook the bacon. The easiest way is to lay it in a rimmed pan—we've used a half-sheet pan here—and bake in a 350°F oven for about 30 minutes or so... 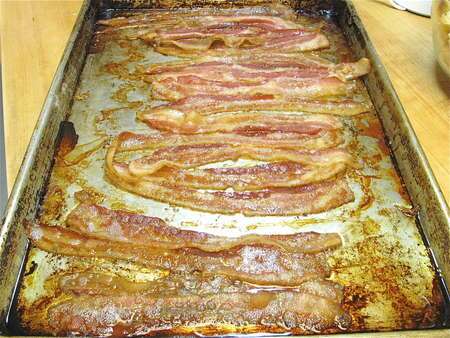 ...till it's browned as much as you like. Note that a pound of breakfast sausage, cooked and crumbled, is also a tasty choice. 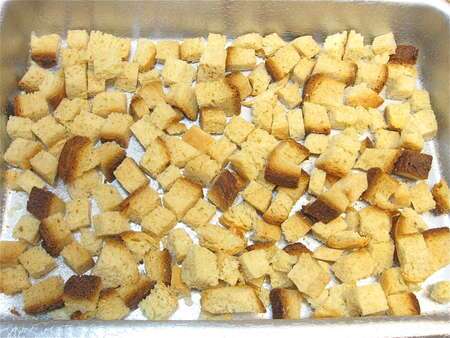 Next, spread half of the bread cubes in a lightly greased 9” x 13” pan. Make sure it's at least 2” deep; this recipe will fill the pan quite full. 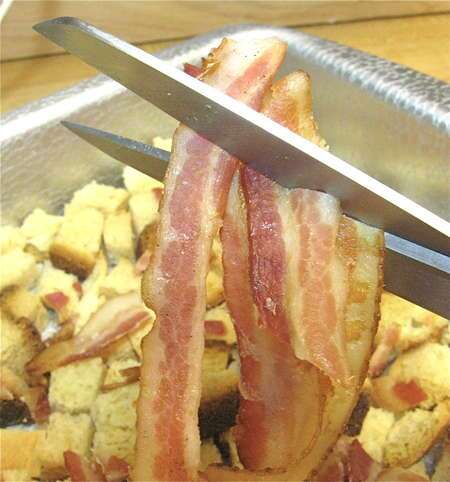 Cut the bacon into bite-sized pieces. I find a pair of scissors does the job nicely. NOT kitchen shears; I've never liked those. Just a pair of sturdy, plain desk scissors.

Spread the chopped bacon atop the bread. 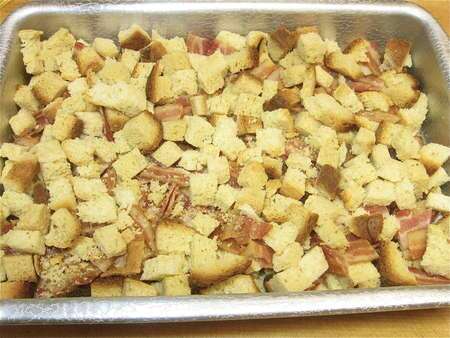 Cover with the remaining bread. It's OK for some of the bacon to show through. 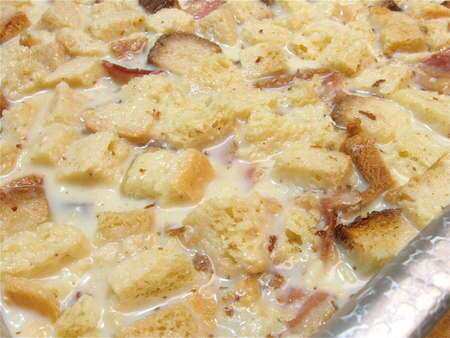 Pour in the egg-milk custard. It's lightly sweetened, and scented with vanilla, cinnamon, and nutmeg, for that signature French toast flavor. 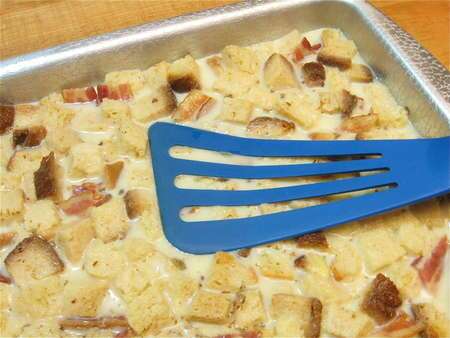 Press the bread down into the milk, to submerge it as much as possible. Cover the pan, and refrigerate overnight. 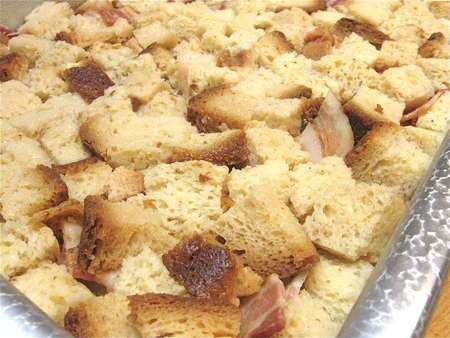 Next day, you'll notice the bread has absorbed most of the milk. 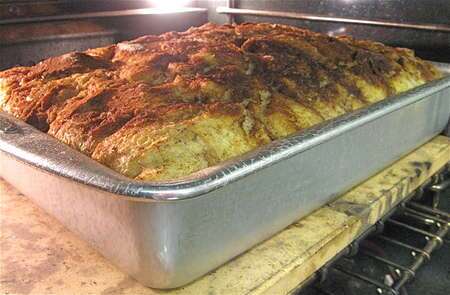 Bake the casserole for about an hour, till it's golden brown. I've sprinkled cinnamon-sugar on top of this one, so it looks a bit darker than it would without the sugar. It may puff up, it may not; either way is fine. 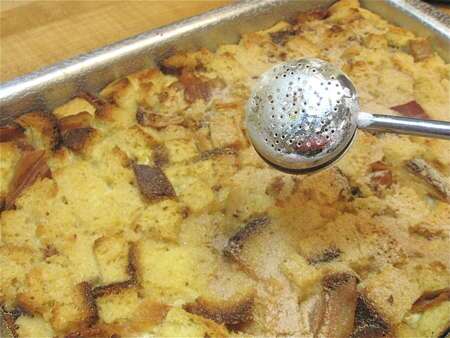 If you didn't sprinkle with cinnamon-sugar before baking, you may want to do so afterwards. The sugar pretties it up; and it tastes great. 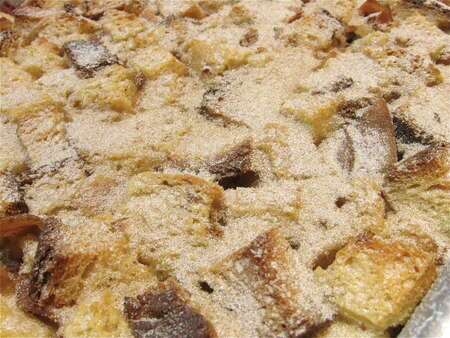 YUM. You could also use confectioners’ sugar, as well. 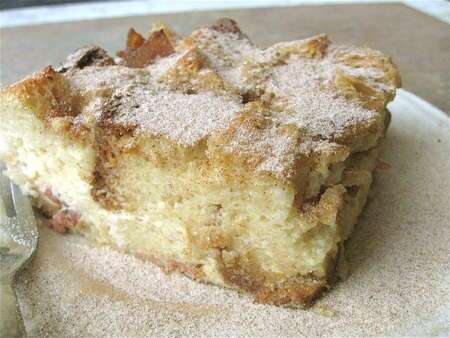 Serve warm; maple syrup is always welcome. As is bacon or sausage on the side, if it's not already baked inside.

Here it is Jan 1st 2017! I'm getting this ready for the refrigerator tonight so we can celebrate at brunch my oldest's birthday and his adult daughter going off with the Peace Corp to SE Asia for over 2 years. I baked a ham today so we'll have ham and oven fried potatoes too. I thank KA recipes!
Planning to make this for Mother's day - any reason you can think of why I can't leave the bread slices whole? Small children will expect it to 'look' more like french toast. I plan to slice the bread and let it dry a bit before assembling and putting in the fridge... thanks for an easier way to 'do' french toast! No reason not to use whole slices - go for it. You might also enjoy our Praline French Toast recipe, which starts with whole slices of bread and rests overnight, making it easy to bake first thing in the morning. Enjoy - PJH
Oops! I made this for breakfast on Thanksgiving morning. It was really too soggy for us. I baked it much longer than the 60 - 70 minutes and egg liquid was still bubbling in it. It probably was in the oven about 1 and 1/2 hours and it was very wet inside when we cut into it. I'm pretty sure I did everything the recipe suggested - bacon, 12 cups of cubed bread ( a small rustic white loaf and added some sourdough to measure up to 12 cups of bread). Oh well, it was an experiment. I have three thoughts: 1.) was your bread very dry before you mixed everything together? That would impact this greatly! The drier the bread, the more it soaks up the custard 2.) did you allow the strata to sit overnight before baking it off? Allowing the bread to soak up the liquid is crucial here. 3.) Did you allow the strata to rest after baking? Letting it hang out for a good hour before serving seems like a long time, but it allows the custard to finish cooking and firm up. These tips might help if you decide to try it again! -Kim@KAF
Is the bread soggy in this recipe since it is cubed? Yes, Donna, it's soft (though I wouldn't call it soggy) - think French toast, about the same consistency. If you've ever had bread pudding - this is the same thing. PJH
My husband is The Baker in our family, and he will only use King Arthur Flour. I'm new to baking, but am absolutely loving these blogs and your recipes! Everything I've tried to make so far has come out great! Thanks for the support and inspiration! Last year was my first time making Christmas Morning breakfast by myself and I chose this baked french toast recipe -- it was simple, easy to do, and absolutely scrumptious. Quite the coup for the "newbie" to place on the table in front of the "pro"! I'm making it again this year! I see a future for TWO pros in the family, Laura... Keep up the good work! PJH
This one is a keeper!! I knew it as soon as I opened the email and read the recipe. I halved the recipe, since it was just my husband and I, and made in on Christmas Eve morning. I know a recipe is well received when my husband tells me that I can make it again any time!! I will definitely make this again ... and again, and again and again. Thank you for so freely sharing your wonderful recipes
I made this for Christmas morning breakfast, assembling it Christmas Eve and putting it in the oven just as people were rising. My bread cubes were half English Toasting bread and half cinnamon raisin bread and I served the breakfast meat on the side, like Cynthia posted above. It was such a big hit with everyone -- with all three generations at my house for Christmas. It was perfect. Thanks so much! You're welcome, Chris - glad it worked out so well for you! - PJH
I made this for Christmas breakfast using a raisin/walnut loaf that I had in the freezer and my guys finished it up this morning... it was easy and totally delicious! I did it without the bacon and served Harrington's Canadian bacon on the side... bliss. Any breakfast that can be done the night before is my idea of holiday heaven. Thanks! CZK (formerly of Strafford!) Cynthia - formerly of Strafford - you missed the 24" of snow! The raisin-walnut baked French toast sounds delightful, as does the Canadian bacon... Thanks for sharing - PJH
I did! Made it last night. Tossed it in the oven this morning and let me tell you my friend this was confection PERFECTION!!!!! My husband and I just ate our morning glory. Tasty and terrific! Four thumbs up! :) :) - The Üdos. Confection perfection - great turn of phrase, thanks for chiming in -PJH
This looks absolutely GLORIOUS. Will try for Christmas Day!!!! Make it tonight, remember - enjoy! PJH