(Garlic) KNOT for the faint of heart...

I was sitting and staring at my computer screen yesterday, zoned out, and all of a sudden two words appeared in my head clear as day: garlic knots.

Halley, our Web project manager, sits across from me. She keeps me on track when I start to wander towards the far boundaries of Baking World. I might be ruminating dreamily about what would happen if you rolled out dough and sprinkled it with diced onion and rolled it up and sliced it like a cinnamon bun… Wouldn’t that be an awesome hamburger roll?

All of a sudden, I’m snapped out of my reverie.

“PJ, where are you on that list of guaranteed recipes?” That’s Halley’s nice way of saying “Get a move on, girl!”

“Oh, uh, almost done. Really. They’ll be done tomorrow, I promise.” I fumble my answer like a butter-fingered fullback, and get back to work. Dream time will have to wait.

But garlic knots… well, for whatever reason, they got Halley’s attention.

Halley is a budding yeast bread baker. She’s worked her way through whole wheat bread, cinnamon bread, sticky buns, and is an expert at white dinner rolls. She asked if garlic knots used the same dough as dinner rolls. I said, yeah, almost…

“So maybe I could make them,” she ventured.

“You sure could. They’re easy, honest,” I reassured her. I explained that you usually find them at pizzerias, but they're simple to make at home. And, like nearly all yeast breads, much, MUCH less expensive.

“Well, why don’t you do a blog on them, then?” That's Halley: Woman of Action. And like so many of you, she likes the step-by-step photos.

So, several hours later, this blog post was born. I made the knots. They’re incredibly garlicky. I mean, over-the-top, DON’T-breathe-on-me garlicky. Halley took a bite.

“Wow. These are awesome. So… garlicky.”

And buttery. And soft. And just plain… awesome.

Why I thought of garlic knots yesterday, I have no clue. Perhaps they were an idea whose time had suddenly come. But without Halley, they would have remained just that: an idea. So, I guess that’s what project managers are for, huh? Making dreams come true… within budget, and right on schedule. 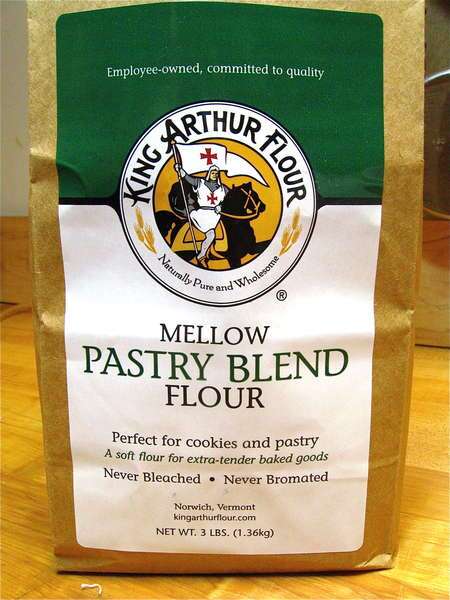 I usually grab my King Arthur Flour Unbleached (11.7% protein), but when I'm making soft rolls, I sometimes turn to Mellow Pastry Blend instead. At 10.3% protein, it's drifting down towards the pastry flour/Italian flour level. These lower-protein flours are perfect for stuff that doesn't have to rise quite as high as a loaf—e.g., pizza, breadsticks, rolls, etc. Mellow Pastry Blend makes a soft, rather than chewy bread. 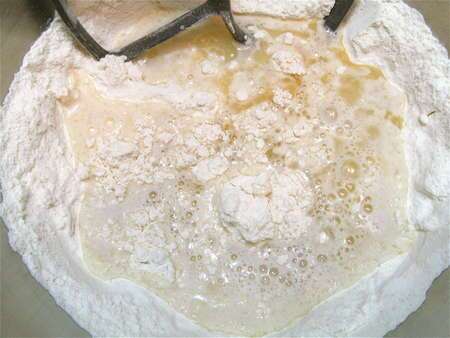 This is what we call a straight dough: no overnight starter involved. Simply combine all of the ingredients... 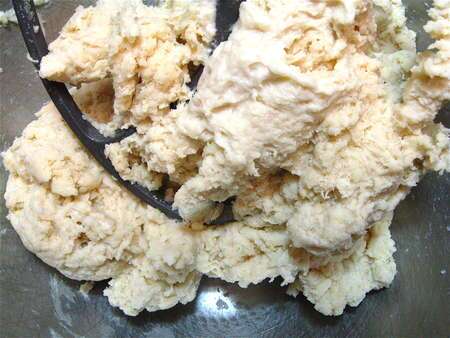 ...and mix till a rough dough forms. At this point, squeeze some in your fingers and see what it feels like. It should be cohesive, but not totally stick-to-the-bowl, gluey/sticky/wet. 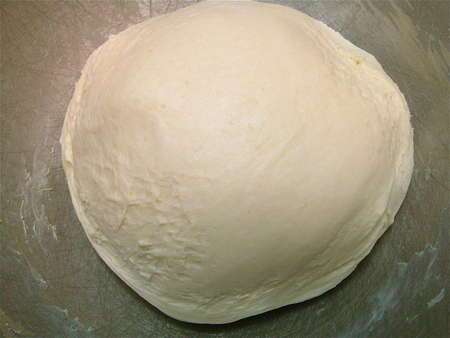 Knead the dough till it's smooth. I used my KitchenAid stand mixer; a bread machine will also do a fine job. If you love kneading by hand, go for it. Your goal is dough that looks like this. 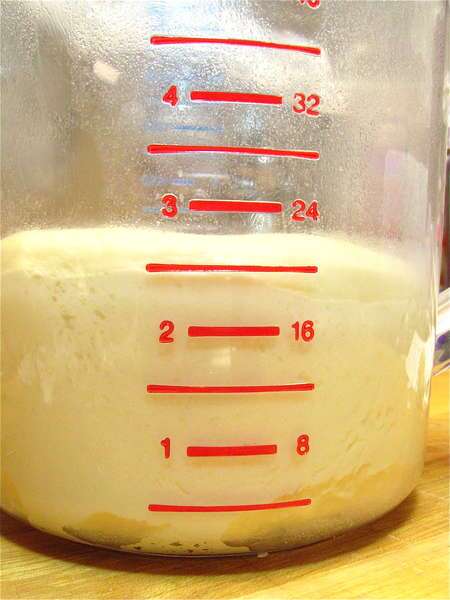 Place it in your favorite dough-rising container... 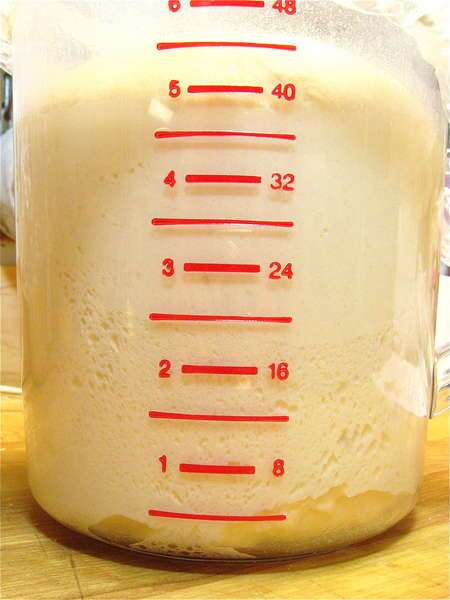 ...and let it rise till it's doubled, or at least very puffy. This took a little over an hour for me, but then, there's a lot of yeast floating around the test kitchen here. If you seldom bake yeast bread, your rising time may be longer. 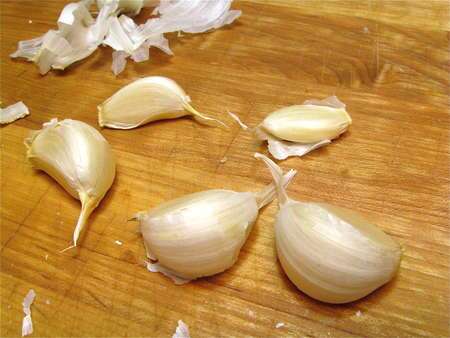 While the dough is rising, prepare the garlic butter. First, separate some cloves. I love garlic, so I use a lot. 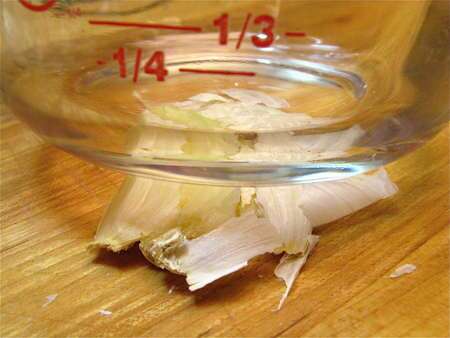 To peel the garlic easily, crush it with the flat side of a knife, the bottom of a measuring cup, or some other strong surface. 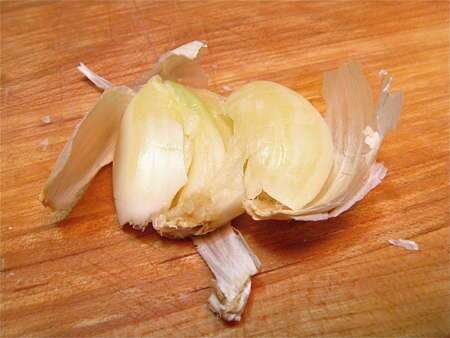 Voilà! Just grab the clove and pick it up; the skin will stay behind. 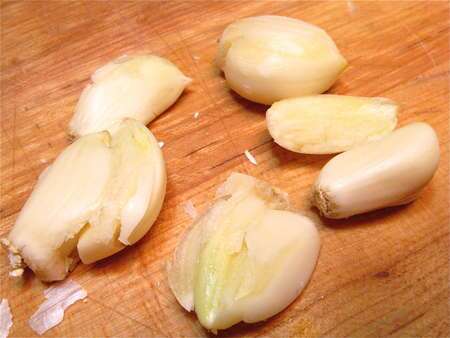 And there you have it: six peeled garlic cloves. 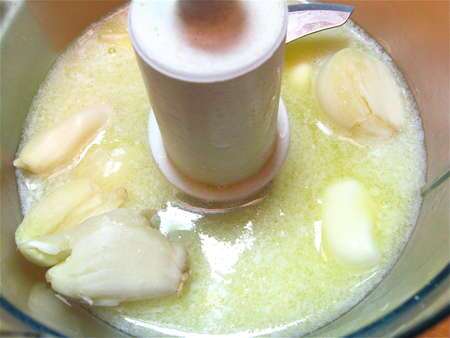 Next you need to chop the garlic. Easiest way: in a mini food processor, with the melted butter. Or with a garlic press or pair of scissors, if you don't have a mini processor. 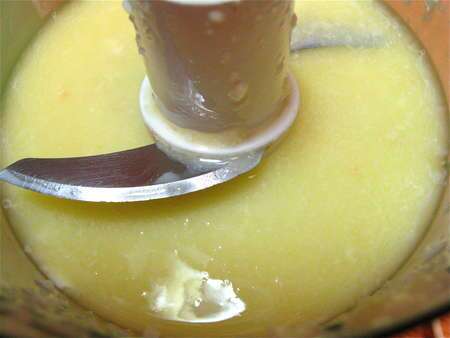 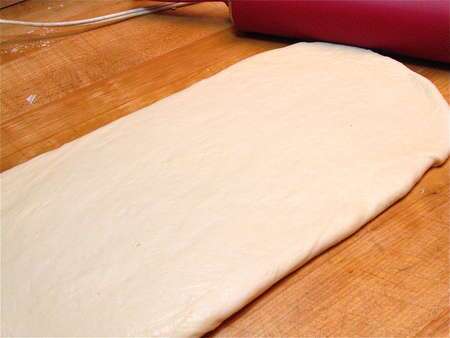 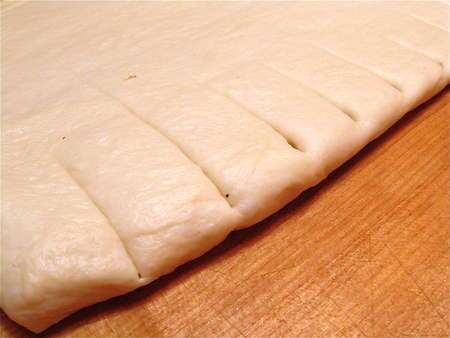 Notch the long side of the dough in 1” intervals. 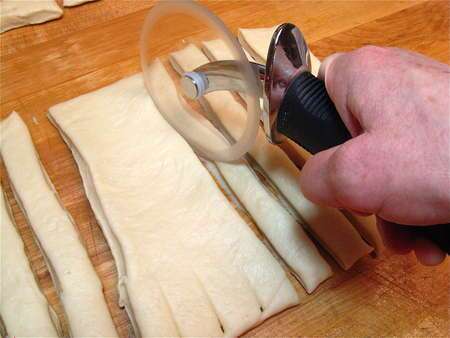 Use a knife, a bench knife, or a rolling pizza wheel to cut the dough into strips. 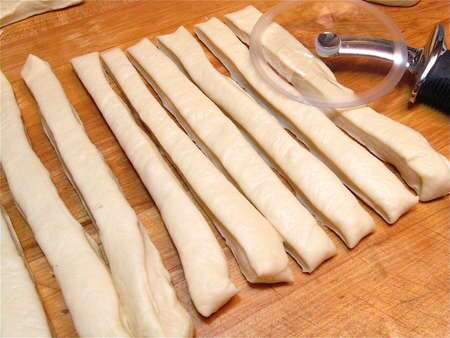 Like this. Isn't this easier than dividing the dough into 16 balls, then having to roll them out? 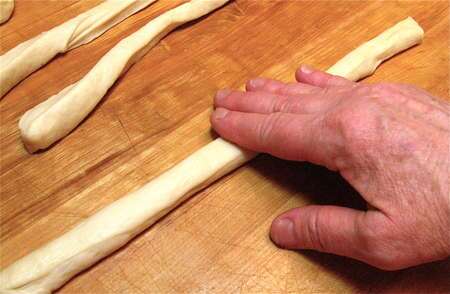 A few gentle back-and-forths under your cupped fingers is all it takes to round off the strips and lengthen them a bit, to about 11”. Lower-protein flour doesn't “fight back” like a higher-protein flour would. 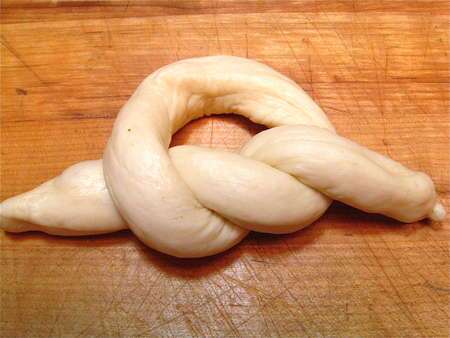 Next, tie each strip of dough into a knot. Watch closely now, sports fans.. 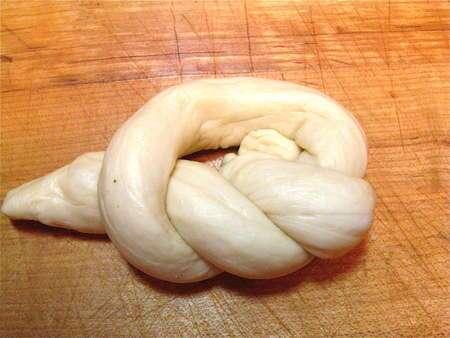 Take the end of the knot that's lying on top (the end on the right in the previous picture), and tuck it underneath and into the center. 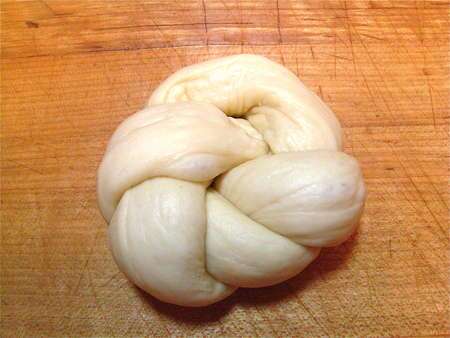 Then take the end that's lying underneath, and bring it over the top, tucking it into the center and squeezing it to the other end. 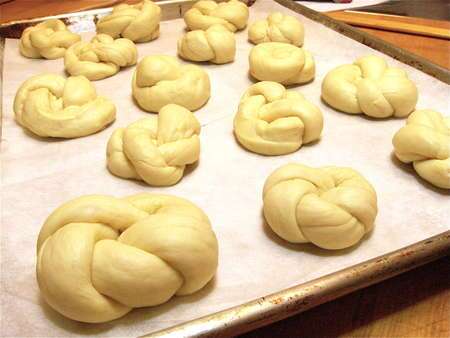 You wouldn’t believe how long it took me to figure out this simple knot. I had to resort to asking Susan, my fellow blogger and real live CIA-trained chef, to come show me how to do it. Several times. And then I had to practice. The last few I did were actually pretty good; you can see them in the foreground here. The others are unsuccessfully trying to hide in the background. As I’ve said MANY times, I simply don’t have that Martha Stewart gene. 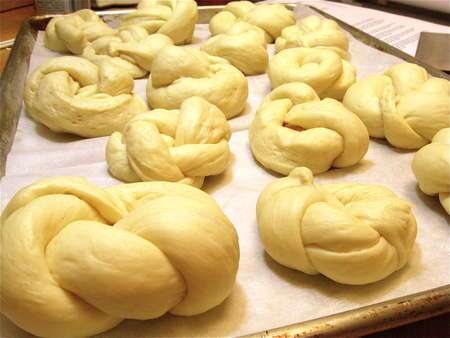 Cover the rolls, and let them rise till they're very puffy, probably another hour or so. 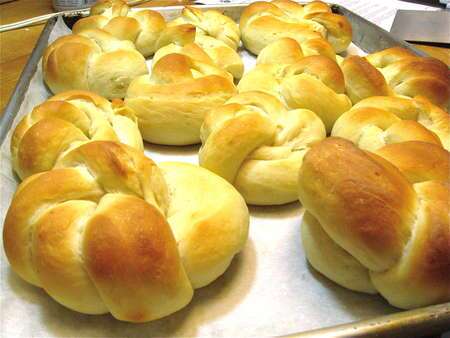 Then bake for about 17 minutes in a 350°F oven. Just till they're light golden brown, and feel set. You don't want these to darken too much; they're supposed to be soft. 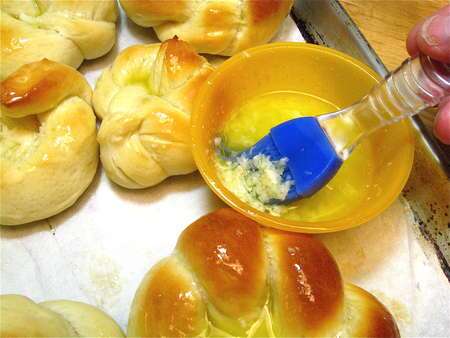 Brush with the garlic butter (which you've reheated briefly in the microwave, if it's solidified). Be sure to dredge the chopped garlic up from the bottom. 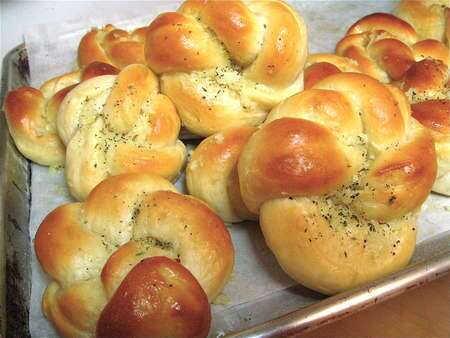 Sprinkle with a little pizza seasoning or Italian seasoning, and there you have it: 16 soft, garlic butter-drenched, luscious garlic knots. I gave half of these to Halley to bring home. She said they disappeared immediately. Hey, Halley—bet I know what YOU'RE baking this weekend!

I want to go make these now, but I have to go make dinner. I was wondering if there was a way of working in some mozzarella cheese into the dough, biting into this and finding the nice gooey cheese would be the best. What do you think? Sure, Betty, I think you could tuck a cube right into the middle of the knot, somehow. Sounds delicious - go for it! - PJH
This dough is rising in my cold house 62F. It is setting under the light on the cook top with a linen towel over it. It will take longer to rise; I put the whole package of instant yeast which was 1/4 teaspoon more than needed. I used part whole wheat pastry flour and all purpose. I used Better Than Milk powder which is soy; I am allergic to dairy. I will eat a few and the rest will go to school Monday. They will go nicely with soup.
What an awesome way to enjoy garlic and to have comfort food!
They look amazing and I can't wait to try them out! I have fond memories of Ramunto's from college... these do look just as delicious!
I can't wait to make these! I'm going to serve them with some nice homemade 3-cheese ravioli. One question: Can I use KA Italian Style flour? Or would all-purpose work better? Thanks! Hmmm... Italian might produce a slightly flatter knot, but it would certainly be very tender. I say give it a try. You may need to cut back the water some wo watch it - start with a little less. Sounds good, Jennifer! - PJH
These garlic knots are the best. And we agree that more garlic is better than less. Use the maximum amount listed.
Happy New Year! I am making these today to eat with our fabulous New Years Day dinner--my whole family saw your blog and the pictures and are anxiously awaiting the results! Please keep your blog going because I absolutely love trying out your recipes (and my family appreciates it as well)!
I have a question. What is "lukewarm" temp on the water added? Is it 80 degrees or room temperature? I can never figure out what lukewarm means!! By the way, I can't wait to make these. My family loves garlic. Hi Gwyneth - "officially," lukewarm is about 105°F. Have fun with these - PJH
Just discovered this blog - I love it! I've been baking bread for more than fifty years and still enjoy trying new recipes. FYI, in the Northwest (Washington and Oregon, maybe other states), we buy SAF yeast by the pound at Winco Stores and save an incredible amount over single envelope prices. Yeah, we figure it's about 75% (or more) cheaper to buy SAF instant yeast by the pound, as we sell it, than the packets or small jars. - PJH
Is there anything that can be substituted for the Pizza Dough Flavor? It's a delicious addition, but you can leave it out. Molly @ KAF