We don't make ’em like they used to... thankfully

I grew up on cinnamon rolls. You know, the ones that pop out of the tube, your mom puts them in the oven, and you get to pry open the can of soft frosting and spread it on when they’re done. I LOVED those rolls; they were a top o’ the heap treat. And we only had them like twice a month; they alternated with cinnamon streusel coffeecake as the Sunday-morning-after-church reward.

I hadn’t had one of those rolls in years. Sunday has become just another day (albeit one that still includes church in the morning). I eat low-fat protein for breakfast, rather than sweets. And if I do treat myself to some carbs, they’re usually in the form of homemade pancakes or an almond puff loaf.

But a few weeks back, I sampled one of those cinnamon rolls from my past. And the experience just wasn’t what I’d remembered. They tasted, well, chemical-y. And while the icing was finger-licking sweet, it was also kind of flat-tasting. No aromatic vanilla, no butter notes…

I thought I’d read the package to see just what was in these babies, and was surprised to see no vanilla, no butter. In fact, they featured bleached flour, partially hydrogenated oil, cellulose gum, Yellow 5 and Red 40… Ewwwww! This just isn’t the way I want to eat.

So, the longing for cinnamon rolls still lodged in my soul, I dug out my favorite all-purpose soft white bread recipe, and turned it into cinnamon rolls. Not difficult. Cinnamon-y and lovely. And the ingredient statement reads unbleached flour, butter, yeast, sugar, vanilla, salt, cream… So much nicer, don’t you agree?

When you want a Sunday morning treat that’s high on flavor, low on chemicals, try these Cinnamon Rolls. 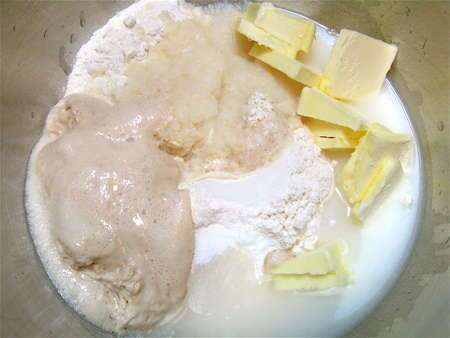 Start with the usual yeast bread suspects: flour, butter, salt, liquid, and yeast. In this case, I'm using active dry yeast that's been jump-started by dissolving it in water with a pinch of sugar. For you yeast neophytes (or instant yeast users), it's that foamy tan stuff on the left. 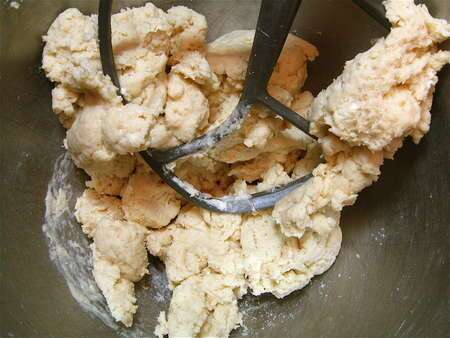 Mix to make a rough dough. At this point, you can get an idea of whether you've got the correct flour/liquid ratio. This looks pretty good; it's hanging together, and not too sticky. If you can't squeeze the dough and make it cohesive, add a tablespoon or two additional liquid; if it seems really sticky, add a bit more flour. 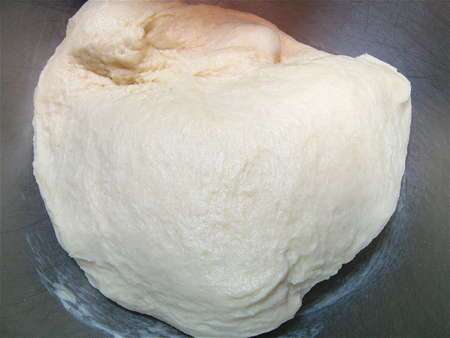 After 7 minutes of kneading (speed 2 in my KitchenAid stand mixer), it's a bit sticky, but nice and smooth. Better a bit sticky than too dry; the stickier the dough (to a point), the lighter the rolls. 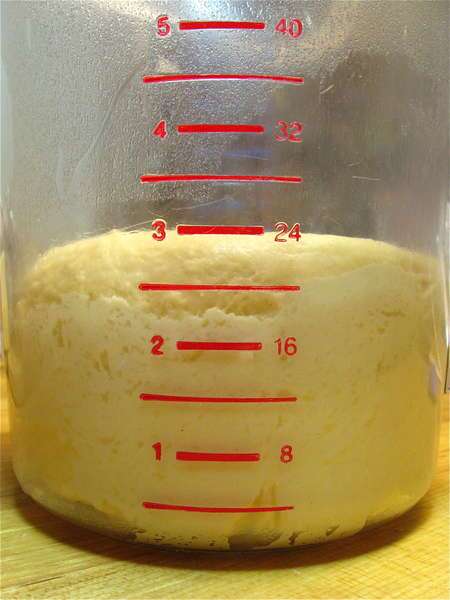 Put the dough in a greased container large enough for it to at least double in size. I like to use an 8-cup measuring cup; it lets me see exactly how much the dough has grown. And yes, for all of you who've been asking, we'll be selling this measuring cup beginning in early August. 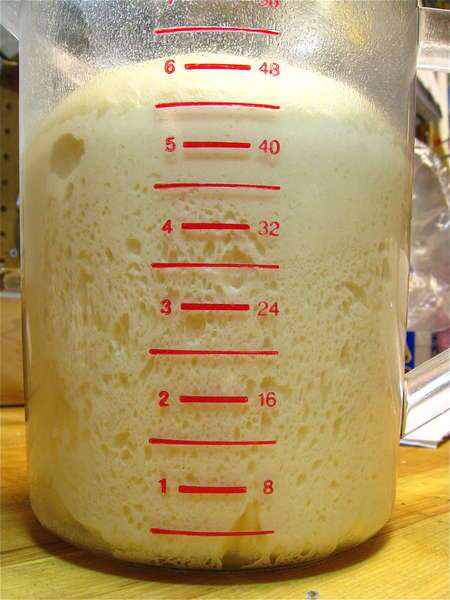 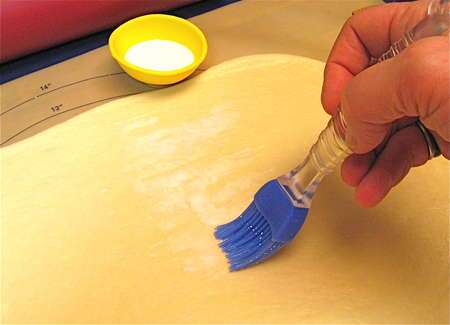 Roll the dough into a rectangle, and brush it with milk. This will help keep the cinnamon-sugar filling in place. 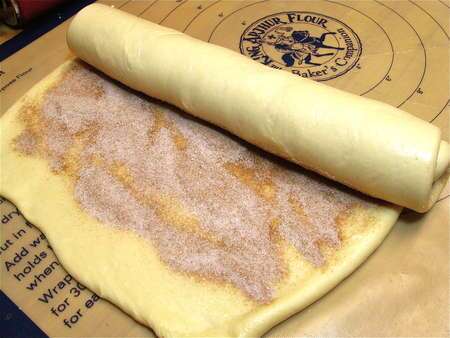 Sprinkle the dough with the cinnamon-sugar, and roll it up. 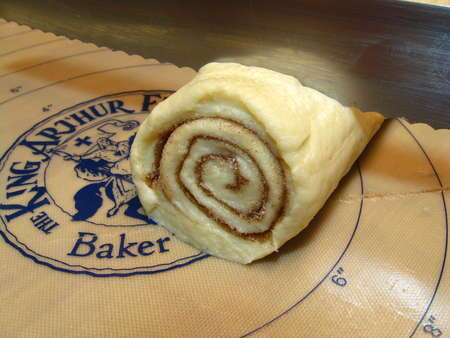 Cut the log into even slices. If you're cutting on a silicone mat, be careful; you don't want to cut into the mat. Like I did a few months ago—see how this mat is sliced on the right? DUH. Live and learn... That's why they call it the “test” kitchen, I guess. 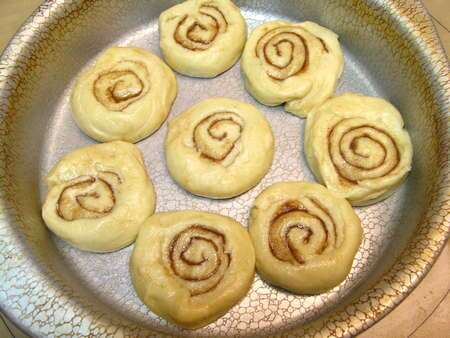 Divide the rolls between two 9” round cake pans, spacing them evenly. Flatten the rolls slightly. Cover the pans, and let the rolls rise... 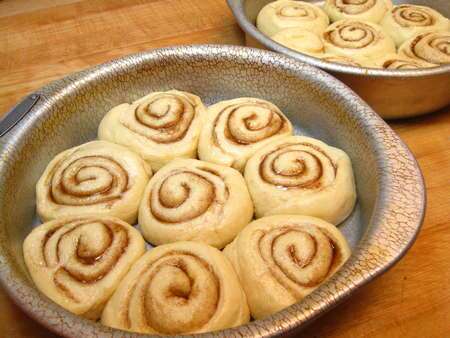 ...until they've gotten puffy and started to crowd one another in the pans. Ah! They're ready to bake. 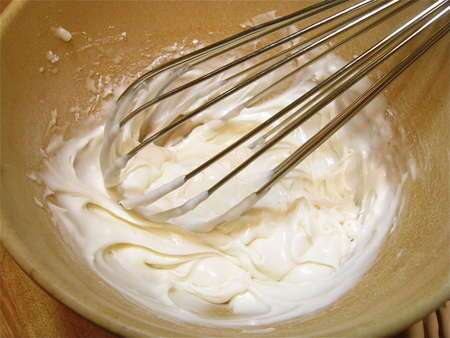 While the rolls are baking, whisk together the icing ingredients, adding enough milk or cream to make it nicely spreadable. 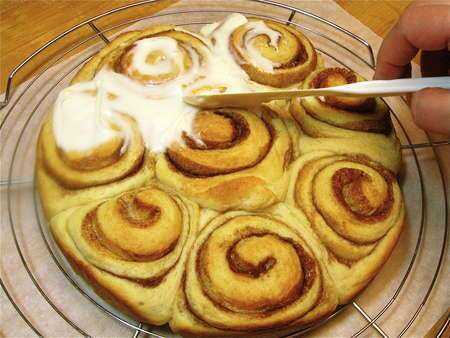 Remove the golden-brown rolls from the oven.

If you're going to serve them later, allow them to cool; don't ice them yet! That's one of the things I learned about homemade cinnamon rolls; unlike the chemical-laden variety, they dont' stay soft for long. So it's best to bake the rolls ahead (up to 2 or 3 days prior), then reheat briefly and ice just before serving.

If you're serving immediately, spread the icing over the rolls. 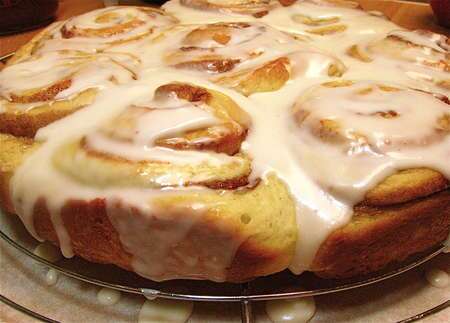 Warm cinnamon rolls, dripping with vanilla icing... what's not to like?

Read, rate, and review (please) our recipe for Cinnamon Rolls.

Why did the brown sugar filling melt out of my rolls and carmeluze on the bottoms of them?!? Any help would be appreciated! Thanks!

We're sorry to hear about this, Anne! Did you bake your cinnamon rolls in a glass pan by chance? If so, it's likely that the filling liquified because glass conducts heat much differently than metal will — lowering the oven temperature by 25°F can help combat this. If this wasn't the cake the rolls might just need to be baked a tad further away from the heating element, we'd suggest moving the pan up a level next time. We hope this helps for future baking adventures!

this would be like cinnabon rolls with the gooey goodness in he bottom. can brown sugar be used instead of granulated?

You certainly can, Clarence! This would be a 1:1 swap. Happy baking!

Sounds great, but the link for the recipe doesn't work. Can I please have a copy of the recipe? Thanks for letting us know, Carl. It works now. Here it is: Cinnamon Rolls. PJH
This sounds delious.. but i am doing cinnamon rolls for a baby shower on sunday and there is going to be around 50 to 100 people there and i was needing a receipt that i could make the night before and then maybe cook them the next day or even reheat them.. do you know if that is possible or should i just get up at 5 the morning and make them and so they are ready by 12? If anyone has any sugestions please let me know!! Thanks, Kasey Kasey, bake but don't frost the day before. Next day, tent with foil, reheat for 10 minutes at 350°F, then frost. Should be just dandy - PJH
I have the dough rising but I may have made a mistake. I did purchase the instant potato flakes but did not reconstitute it. The flakes are visible in the dough. Did I do something wrong? Flakes will disappear once they're baked - or they should. They're VERY faintly visible in dough when I make it. And you were right, they don't need to be reconstituted- PJH
Hi PJ, I'm in Kenya so no King Arthur Flour here, unfortunately. (I would love to import it but it would make my products too expensive with shipping and customs, etc!) But I made them in muffin tins and it worked - in fact they were more uniform than the ones together in the pan - so maybe I'll buy bigger tins and increase the recipe for retail sale? Then I was thinking maybe cream cheese in the icing to make it thicker and less sweet? Another idea, I added cocoa powder like one of your readers suggested, which was nice. Then I was thinking about trying mostly cocoa (or a chocolate sauce) in the middle of the dough with some chopped almonds? Then an icing with almond essence? Yum! Lots of possibilities. ALL sounds good, Lee - wish I was a "little" closer to your bakery! - PJH
PJ, thanks for another awesome recipe, I made these 2 weekends ago and 3 of us finished the whole batch! So I was thinking about making these to sell from my bakery but I read your response to someone else saying these aren't really appropriate for sale because they should be served warm. I also thought the icing would be an issue (kinda messy), as well as asking retailers to separate them for sale would be awkward. Any ideas for cinnamon roll-like recipe that my clients who sell in cafes/restaurants could use? Maybe stand-alone cinnamon buns with a thicker icing? These are so good, I just want to share them! I'll do a test run this weekend with solo rolls... Lee, contact our bakery sales manager, Tod Bramble: tod.bramble@kingarthurflour.com. If you use King Arthur Flour, he'll be happy to help you identify a good cinnamon roll recipe - he probably has one he can share. - PJH
I've got a quick question about these related to freezing. I know I can freeze them in the pan after the first rise, but would it be even better to freeze the log whole, then when ready to use, thaw the log and proceed from there with the cutting and second rise? I wondered if maybe freezing the whole thing intact would keep it fresher, plus it would take up less space in the freezer. And BTW, thanks for including the kneading time in your recipes, PJ. Even though I bake a lot, I'm still usually unsure how long to knead in my KA just based on visual clues. So I really appreciate when you tell us how many minutes it took you! Emilie, that sounds like a good idea, freezing the log whole. But can I suggest - instead of brushing with milk and sprinkling with sugar, flour and cinnamon, try just sprinkling with a couple of teaspoons of cinnamon. I think the rolls will hold together better; no telling what freezing then thawing will do to that sugar/milk mixture. And anyway, he topping on these is so sweet, you can get away with no sugar in the filling (in fact, I prefer them this way). I'd also suggest cutting them while still partially frozen, so they retain their shape. Give it a try, and good luck- PJH