I first made this Sourdough Ginger Pumpkin Bread during an unprecedented heatwave in Los Angeles, and despite the 100-degree weather outside my front door, it felt like fall in my kitchen.

Which proves just how perfectly this bread captures the spirit of this harvest season. First, there’s its shape and color: Bread, that looks like a pumpkin! Then, there’s its flavor, redolent of pumpkin pie spice and crystallized ginger. One bite was all I needed to enthusiastically embrace autumn, at least in spirit. Because really, fall baking is more of a mindset than a weather forecast (at least here in Southern California, that is).

This recipe — which would be a terrific centerpiece for a holiday meal — is simple to make: Here’s how to do it.

Despite the intricate appearance, this bread is made with basic tools. You’ll need:

(Heads up: At King Arthur, we only recommend the products that we, as bakers, truly love. When you buy through external links on our site, we may earn an affiliate commission.)

This Sourdough Ginger Pumpkin Bread is just barely sweet, with a kick of spice and subtle pumpkin flavor. (The pumpkin purée does double duty — it also gives the bread a light orange hue, so it looks even more pumpkin-like.)

The inclusion of sourdough adds depth of flavor, but it isn’t solely responsible for the bread’s rise. Because the dough also includes commercial yeast, you can use either fed or unfed (discard) starter in this bread.

It comes together like a typical dough — combine ingredients in a stand mixer or by hand and knead until smooth and elastic, then set aside to proof.

Of course, you can use this shaping method with other bread doughs; simply prepare through the bulk fermentation stage, then follow the steps below.

Set up your shaping situation

Once the dough is rising, prepare your shaping setup.

Grease the baking bowl or pie pan and line the bottom with a parchment circle.

Next, cut the string into four 18" pieces, then line them up next to each other and tie them together, making a knot in the middle. You should now have eight lengths of 9" string extending from the center knot.

Hold all the loose ends together, then dip the strings into the vegetable oil, leaving 2" at the tip of each loose end undipped.

Place the knot in the center of your pie pan or baking bowl (in other words, a bowl that's oven-safe!) and extend the eight lengths of string so they drape over the edges of the pan or bowl. Arrange so they’re evenly spaced.

Bring in the bread dough

Once proofed, shape your dough into a ball and place seam-side down in the center of the pan or bowl, over the knotted center of string.

Cover the dough (a large overturned bowl is great for this!) and let it proof for about 60 to 90 minutes, until it holds an indentation when lightly pressed with your finger.

Get ready to bake

Brush the dough with an egg wash. If using a baking bowl, you can use the strings to gently pull the dough away from the sides of the bowl so you can reach underneath.

Next, break out your lame or a sharp knife. Use it to cut a 1/2"-deep line from the bottom of the loaf to the top in the center of each empty section of dough created by the strings. Repeat all the way around between the strings, so you've cut eight lines alternating with eight strings.

Leave the strings in place and bake the bread in a 350°F oven for 50 to 55 minutes, tenting the top with foil after 35 minutes. When the bread is golden brown and the center reads 190°F on a digital thermometer, remove it from the oven, tip it out of the pan, and cool it on a rack.

When the bread is cool enough to handle, use scissors to cut the strings and remove them. Finish it off by inserting a cinnamon stick into the top for a stem and adding a sprig of parsley for the vine, if desired. To serve, cut in wedges like a cake.

And if you have leftovers, join me in taking a cue from one of this recipe’s reviewers, who turned their bread into French Toast with homemade caramel sauce and brûléed bananas. A bread that goes from holiday centerpiece to breakfast the next morning? This recipe is all about pulling double duty. 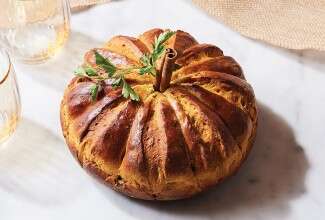 Does oiling the cooking twine keep if from sticking to the bread? I made a version of this last year without oiling it and it left fuzzies in my bread!

Hi Heidi, yes, oiling the cooking twine well should help it release easier and more fully from the baked bread.

My friends and I were just talking about you yesterday. One of the women even has your catalog. What I like best is that you don't use soy. Thank you for that.

I enjoyed making this bread and my family loves it! However, removing the string after baking was a bit challenging since the well-oiled string still did not separate from the bread cleanly, especially where it had become embedded in the dough. My solution--I turned the loaf over and pulled the string through from the bottom, which worked much better! Also, I used Trader Joe's Organic Pumpkin Puree and found that it was very watery (I didn't stir it before measuring, which might have helped) and had to add more flour while mixing and kneading the dough in order to get to the 'smooth and bouncy' stage. The extra flour didn't affect the end product, thank goodness!
Thanks for another recipe that uses discard sourdough starter!

Thanks for sharing your experiences baking this bread, Ann! We're glad to hear you enjoyed making it and that your family loved it.

Ann, I read your review and I had the same issues! I did as you suggested and pulled my string from the bottom which worked just fine so thanks for that suggestion. My dough was also super sticky but I was afraid to add more flour. It tasted amazing but it didn't get the height like the picture on the blog and recipe page because it sorts of 'blobbed out' in my Emile Henry bread pot. I noticed that someone else had the same issue with the hydration of the dough and posted a question about it, but there wasn't much in the way of a solution. KAB, how can one reduce the hydration of this bread since all of it is coming from the combination of the pumpkin, starter, egg and butter? Or, how much more flour is it okay to add to get the dough smooth and bouncy? I hope there is a more definitive answer as I'd like to try this bread again and get more of the pumpkin shape! Thanks!

Add a tablespoon or so of flour at a time Kristin. Keep adding it until you get a texture that you can work with, but keep in mind, the more flour you add the tighter the structure of the finished bread will be.

The 15 best recipes to bake in November