The typical fudge brownie we all know and love seems simple enough — measure, mix, bake — but in reality getting the exact results you want can feel like a bit of a gamble.

While almost all brownie recipes call for chocolate, sugar, flour, eggs, and oil or butter, your resulting brownies can come out thin and bendy, tall and light, gooey, chewy, cakey …

So what’s the secret behind these wildly varying results?

It’s all in how you handle three key ingredients.

If your taste runs to brownies with a deep-brown, chewy, fudge-like center and a lighter-colored, super-thin shiny top crust — IMHO, the ideal brownie — then our Fudge Brownies recipe is your dream come true. In fact, many of you out there have told us that these particular brownies are even better than your previous standard of excellence: the boxed mix.

After years of tweaking this recipe, I’ve discovered two tricks that’ll guarantee you a chewy center and shiny top crust every time. The first is to heat the recipe’s butter and sugar together before stirring them into the batter. The second is to then stir chocolate chips (or chopped semisweet chocolate) into that warm batter.

First, melt the butter and sugar together

The path to brownies with a fudgy, chewy center — so dense their crumb becomes fine enough to almost (but not quite) disappear — is the combination of melted butter and sugar.

Cookbook author Jesse Szewczyk details the science behind using melted (rather than solid) butter in cookies in the secret to fudgier cookies. And it’s all about a step you don’t take, rather than one you do: creaming (beating) the butter and sugar, which adds air to the dough. The result? Light-textured, crispy cookies.

If instead you start by melting the butter and sugar together rather than beating (creaming) them, you introduce no air — yielding chewier, “fudgier” cookies. And the same is true of brownies. By minimizing any air in the batter, relying on just a touch of baking powder or baking soda for rise, you’ll get brownies with that desirable dense, fudgy center.

Melting together butter and sugar isn’t just about fudginess, though. It’s also the first step toward a shiny, ethereally thin crust, one that crackles into shards at the first cut.

That’s because a shiny top crust on bars (both brownies and blondies) is mainly about the migration of dissolved sugar from the center of the baking bars to their top crust. Once there, the sugar re-crystallizes in the oven’s heat and forms a delicate crust that shines like satin.

Heating the butter and sugar together separates the butter’s water from its fat, and the water then goes on to dissolve the sugar. When this heated mixture is added to the batter, the sugar further dissolves in the water from the egg whites. During baking this liquid sugar makes its way to the brownies’ exposed top crust, forming crackly, shiny swirls as the brownies finish baking.

Simply heating the butter with the sugar won’t guarantee that shiny top crust, though. I’ve found I also need to add some solid chocolate in the form of chocolate chips or chopped semisweet chocolate.

I’ve never been able to ascertain exactly why this simple step is needed to produce a shiny top crust. I do know that adding chocolate chips (or the equivalent weight of semisweet chopped chocolate) introduces additional sugar to the recipe; my theory is that, at least in the recipe I follow, the extra sugar dissolves and joins the sugar already in the recipe on its trip to the top crust.

Can I apply these tips to all my brownie recipes?

Any brownie recipe that calls for both butter and sugar should produce fudgier brownies if you heat the butter and sugar together before using. But as for that shiny top crust: It’s tricky. While you need enough water to dissolve the sugar, too much will produce cakey rather than fudgy brownies. Rather than retrofitting a non-fudgy, non-shiny brownie recipe, your best bet is to find an existing recipe that already yields a fudgy center and shiny top crust: Fudge Brownies is my favorite such recipe. 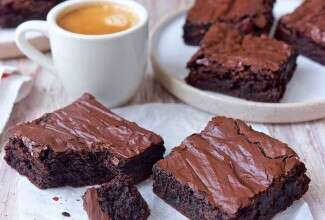 if PJ Hamel writes it; I stop to read it and many times after.
I have baked since a youngster with Granny. and the warmth, sincerity
and experience she shares, I know, any recipe will be better because of her!
Thank You, PJ for being my Muse!
from your barefooted story to pictures of the Doggies.
Don't ever quit Inspiring
Thank YOU!

Oh gosh Carole, PJ is going to start blushing! We love that we can inspire you to keep baking and hope you continue to do the same for us. Let's bake the world a little better together.

I believe this is the same brownie recipe in your Cookie Companion recipe book which I have been using for years. We all love it. I have been asked a few times what mix I used and people are shocked to learn it’s homemade. No one thought homemade could have the shiny top. A big plus it’s all done in one pan.

Does this work with a butter substitute? My husband is vegetarian and so I use a fake butter and have never gotten that crisp layer, even when melting with chocolate. Am I doing something wrong?

It might be the lack of water content in your alternative butter Lisa. If the sugars can't dissolve completely then they won't be able to migrate to the surface of the batter during the baking process. This is the first part of the crispy crust magic! Check the ingredient list next time you are perusing the butter isle and look for something that mimics the water content in dairy based butter hopefully that will lead you in the right direction!

Oh man, now you've got me wondering. So, I've been making a brownie with the shiny top for a million years now, but the method is a little different. The recipe originally came from a well-known former caterer from the Hamptons (cough, cough), and it produces a very dense brownie.

All the chocolate from the recipe (save for a bag of chips that are stirred in at the end) is melted in a bain-marie with all the butter. So, I personally use unsweetened Callebaut + semi-sweet Guittard. Well over a pound in all. The butter is a pound of high-fat European (salted) butter, as well. That's cooled for however long it takes me to mise en place everything else. The sugar - of which I use the bare minimum, so scant 1.75c - is added to a bowl with the wets, including 6 extra large eggs, and the chocolate mixture - still a smidge warm - is stirred into the wet bowl. The drys are slowly incorporated and the rest of the chips are folded in.

The shiny top is always there, when I use the same ingredients in the same proportions. When I was tinkering - say, too few eggs, too little sugar - that top wasn't there.

I'd have to go through all of my notes from my time in culinary school ages ago + deep dive the internet, but I'm leaning towards the eggs and the fat from the chocolate and the butter interacting, with the sugar lending an additional something? The butter adds a glossiness to the chocolate, the eggs and sugar help with structure. There's about a cup of flour, which I'm sure is relevant, too.

I know PJ melted hers in the microwave, can we brown the butter (like I do for cookies)?

Hi Kerri, you can certainly brown the butter for extra flavor. Happy Baking!

Thank you!! My mother’s brownies were always exactly as you describe: very few crumbs, a crunchy, shiny top, and melt-in-your-mouth chocolate-ness that doesn’t stick to your teeth!!
However, I am now diabetic and am limited to sugar intake. I have discovered allulose, a new, non-sugar sweetener. I have made bread with it with great results, but what about sweets? Like cakes and brownies?
Have you tried this new sweetener in brownies??

Thanks for reaching out Joyce, and for gushing about your mother's amazing brownies! We haven't tried the allulose but we do love our new Baking Sugar Alternative that can help you achieve brownie perfection. Don't hesitate to reach out to our Baker's Hotline for tips on diabetic baking.