Something to scream over

It's the most wonderful time of the year again! No, not *that* one. I'm talking about the hairiest, scariest, creepy-crawly, party-up-front, spooky-in-the-back time: HALLOWEEN!

Around July, fellow blogger MaryJane Robbins and I start to whisper to one another:

Other bakers may be thinking about the 4th of July and red, white, and blue; but our thoughts turn to orange, black, and green: Halloween.

This year the two of us, annual co-conspirators in creating trick-or-treat treasures, have been separated by time and space. But we've stayed true to our 5-year (and counting) tradition of creating outrageous and entertaining Halloween dishes to share with you.

We've kept this year's treats a secret until now. But we're ready to put on the party music* and unveil ... Halloween mummy hand pies!

*That's right, we're blasting the tunes. WRAP music! Care to join us for a round of Name That Tomb? 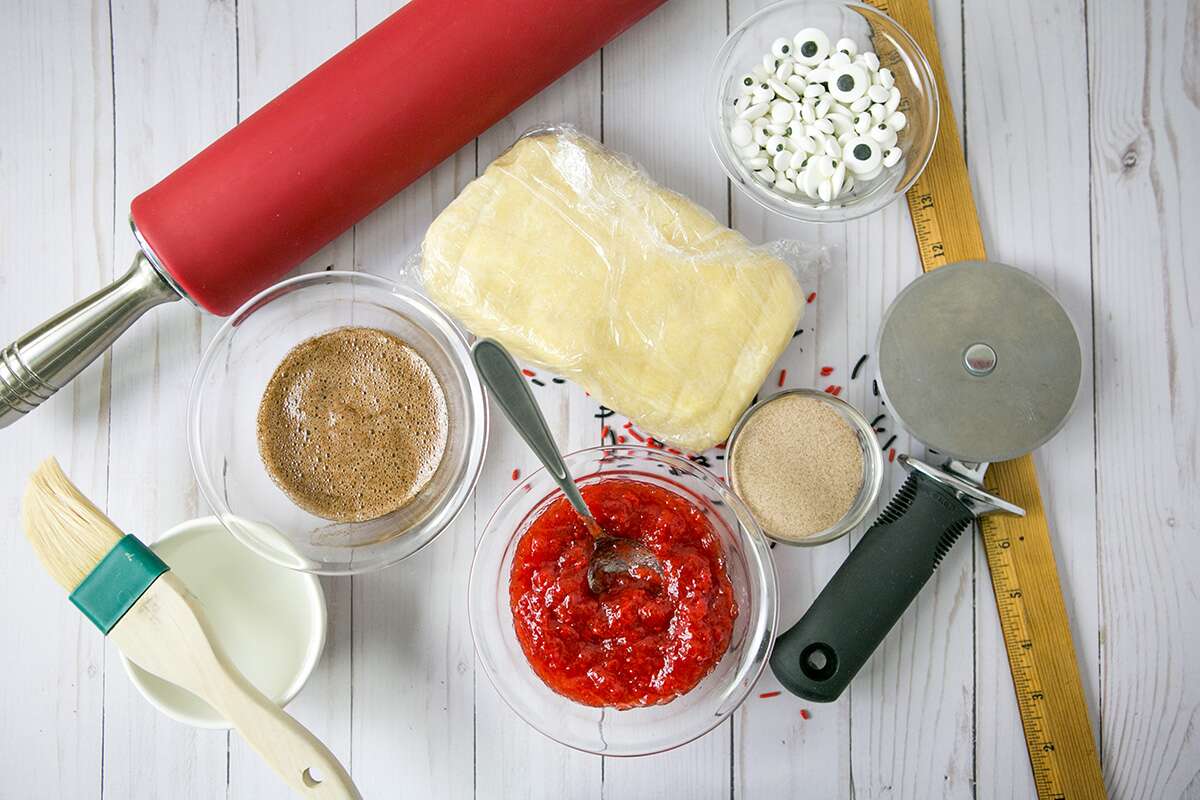 As always, MJ and I try to make sure whatever we come up with is not only super adorable (in a totally scary way, of course) but also simple to make. Simple yet stunning — baking rules we live by!

Gather your tools and ingredients

Roll out the dough for the base and wrappings

Roll out half the prepared dough and, using a ruler, cut into 5" x 2" rectangles roughly 1/4" thick. These are the mummy bases. Each 1/2 of dough should get you 3 to 4 bases, with the rest being used for wrappings.

Take the scraps from your bases and roll this dough roughly 1/8" thick. Using the pizza cutter, cut strips to make the mummy wrappings. Don't get too caught up in measuring the exact size of the strips. Just relax and you know, unwind.*

*You might think this was a dad joke, but it came from our mummy!

Add about 2 tablespoons of jam per mummy. Spread the jam out, leaving a 1/8" border (approximately) around the edge.

If you're making cinnamon-sugar mummies, use only about 1 teaspoon of the filling for each base, since it's more likely to bubble out while baking. 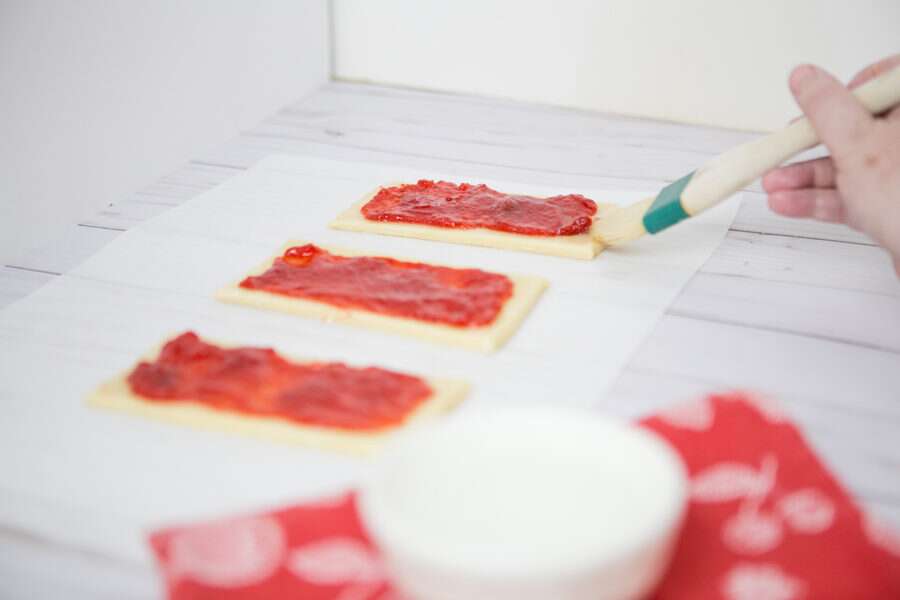 Brush water or beaten egg onto the bare edges of the filled squares. This will ensure the mummy wrappings stay securely in place while baking. 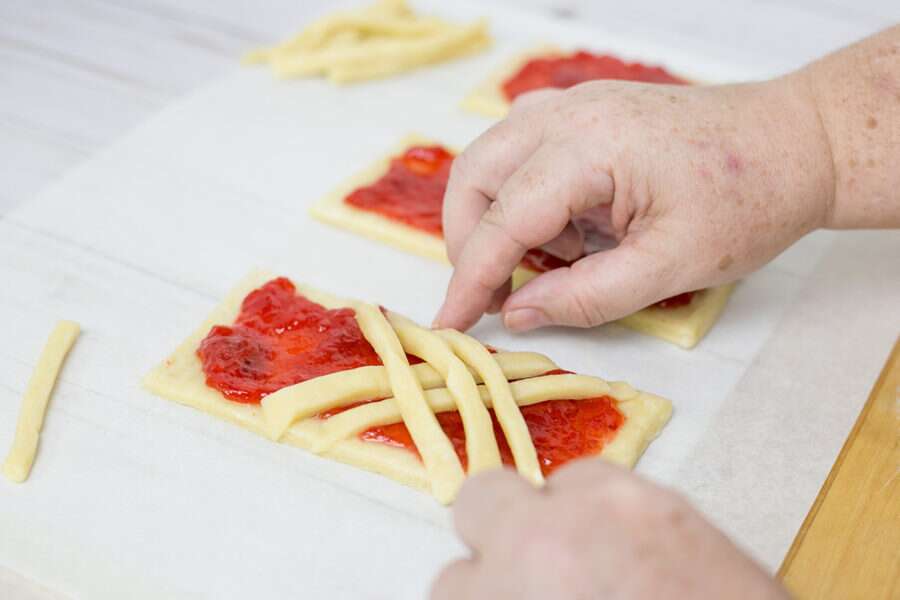 Place your pre-cut strips on top of the filled squares. Arrange them and layer them however you like. After all, there's no "right way to mummy." When MJ and I were creating these we left a bit of open space near the top for the sugar eyes, which we added after baking.

Trim the edges of the bases to remove any excess wrappings.

What's a mummy without a little sand in his britches? For our cinnamon-filled mummies we've brushed on some melted butter and added a layer of cinnamon-sugar "dust." 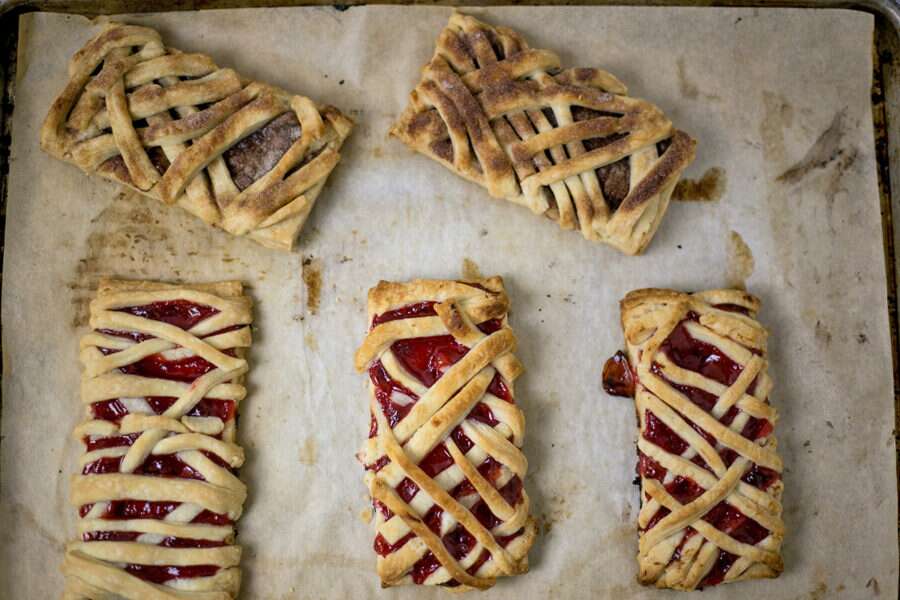 Bake your mummies (without eyes!) in a preheated 400°F oven for 20 to 25 minutes, or until golden brown. 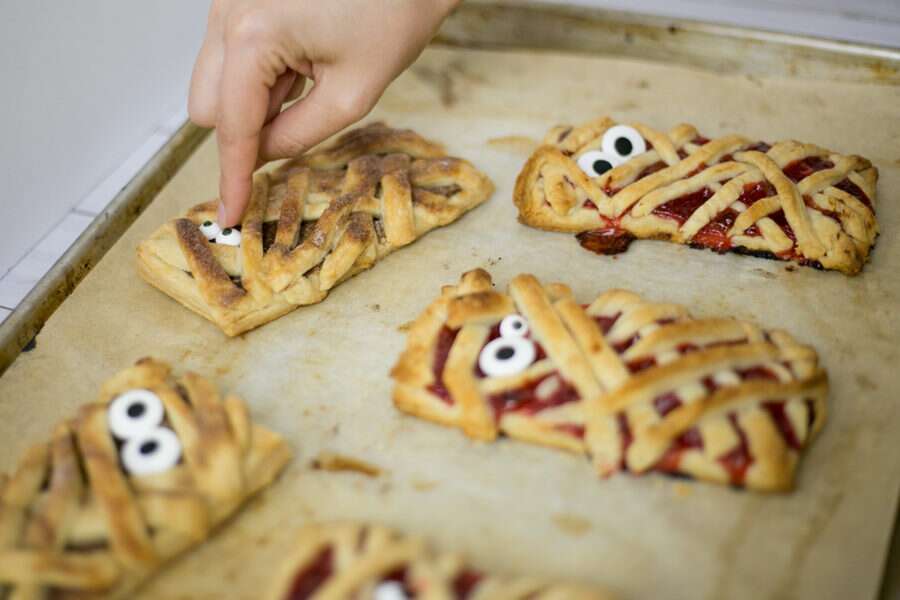 Here's where these treats really come to life.

Life? No way — these guys are all about the afterlife!

We found using a variety of different-sized eyes gave us the most bang for our buck, allowing each mummy to have its own personality and expression. Basically, we had too much fun at the craft store and bought all the eyes we could see (sorrynotsorry!). 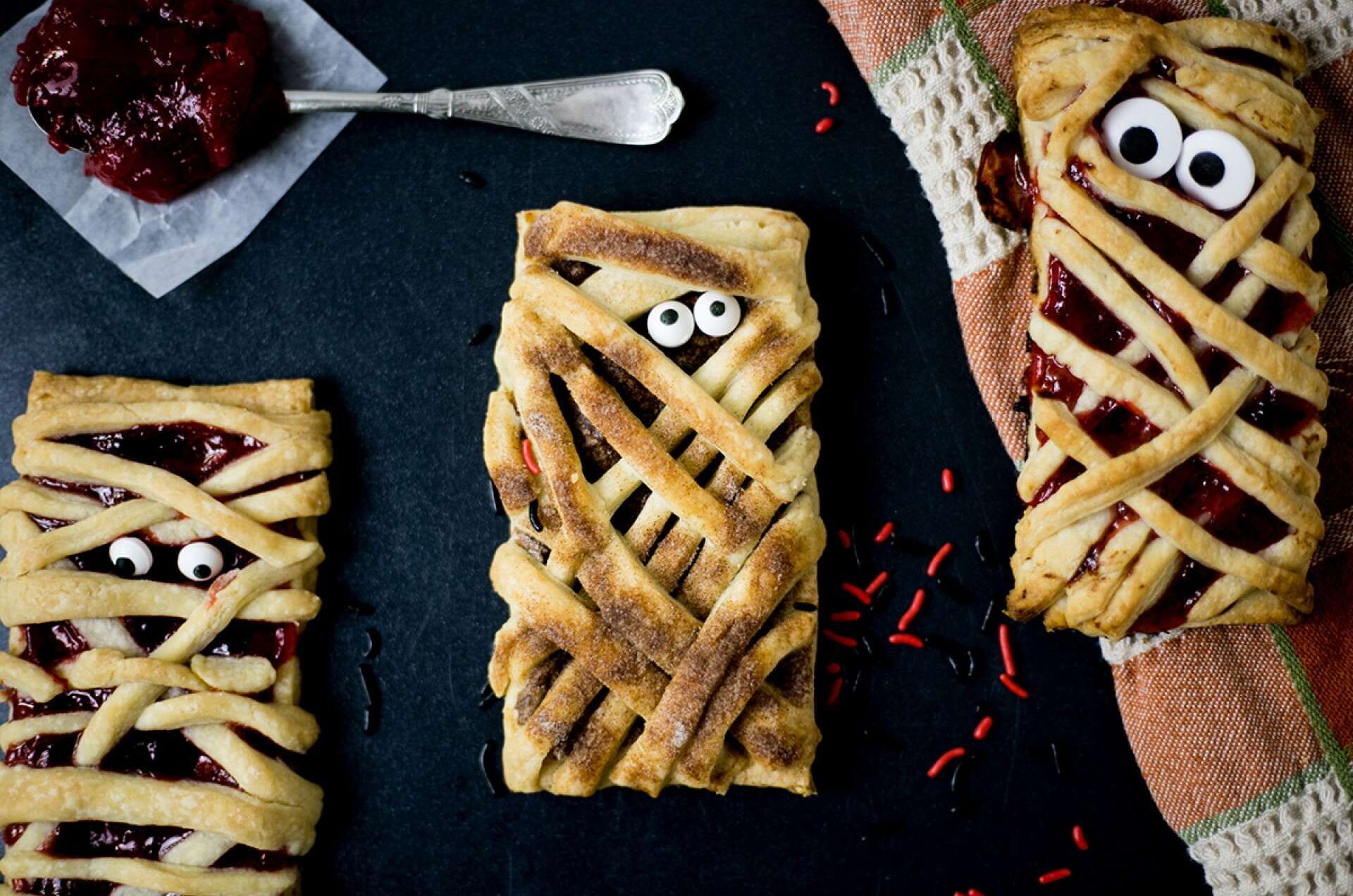 Tell us, are there any hauntingly good treats you'll be baking this Halloween? Any suggestions for next year's collaboration? 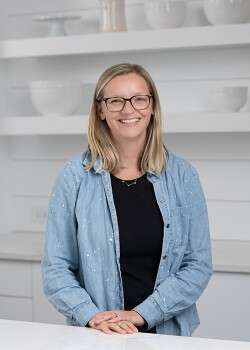 can we mmake ahead and freeze? if yes, at what point, before or after baking? how long will they keep in the freezer?

Hi, Amelia! We'd freeze them after baking. They should last around 3 months frozen and well-wrapped. You can learn more about freezing pies (including cute pies like this!) here: Freeze and bake fruit pie.

Making these for lunch today except going the savory route with ham and cheddar :-)
I can't wait to make these. I'm so glad Halloween is 2 weeks away! Great idea Keri to dip them in white icing.
How stinkin' cute are these???? Haven't seen a post by Mary Jane in a while and was wondering if she was still there. Thanks for mentioning her. HI MARY JANE!!!!!! xoxoxo
Once cooled dip them in a really thin white icing to make them look like mummies, then put the eyes on! :-D
I love these!