After the political and social unrest of the 1960s, the 1970s dawned full of hope and new beginnings: the first Earth Day was celebrated in April, 1970.

In between were years of fuel shortages, with gas station lines snaking down streets across the land. President Carter, in his cozy cardigan sweater, urged Americans to turn down the thermostat.

Watergate, a simple hotel room break-in with enormous political implications, mesmerized the American public and resulted in a presidential resignation.

America's long national nightmare, the war in Vietnam, drew to a painful close – but not before four students protesting the war at Ohio's Kent State University were gunned down and killed by the National Guard.

In 1972 the Clean Air and Clean Water acts, marking a growing awareness of the fragility of our natural resources, were passed into law.

But that same year the Equal Rights Amendment to the Constitution – giving American women equal rights under the law – was defeated.

Throughout the decade, the ’60s "hippie lifestyle" was challenged by the New Right – a.k.a. the Silent Majority – which demanded a return to the traditional family values of the 1950s.

In short, the 1970s was a decade of huge contrasts – both political, and cultural. But it also marked the birth of an iconic food: granola.

1972: Heartland Natural Cereal and Quaker 100% Natural Granola are launched. Less than a year later, Kellogg's and General Mills bring out their own granolas. Seen as a healthier alternative to bacon and eggs, granola takes off — especially with liberal-leaning early adopters, who see it as a more natural, environmentally friendly breakfast.

And soon enough, the word "granola" is used to describe not just a cereal but a lifestyle, to wit:

Crunchy granola: adjective, slang. Definition: characterized by or defining oneself by ecological awareness, liberal political views, and support or use of natural products and health foods. – dictionary.com

The 1970s certainly can't be termed one of America's finest. But thankfully, one of its lasting legacies is a feel-good, tasty breakfast cereal that's surprisingly easy to make at home: granola.

I'm going to print the entire recipe right up front, for convenience's sake. But I urge you to read through all of the homemade granola tips following the recipe before you actually start; they'll make the process a lot easier.

In a separate bowl, whisk together the oil, salt, maple syrup, and vanilla.

Pour the wet ingredients over the dry mixture in the bowl, stirring and tossing until everything is very well combined.

Spread the granola on parchment-lined baking sheets, patting it gently to flatten.

Bake the granola for about 90 minutes, stirring the mixture with a heatproof spatula every 15 minutes or so.

When the granola is a medium golden brown, remove it from the oven and cool completely on the pans.

Now, this isn't the only path to great granola; for ideas on mixing and matching your own favorite ingredients, read our blog post, How to Make Homemade Granola.

OK, on to the homemade granola tips: 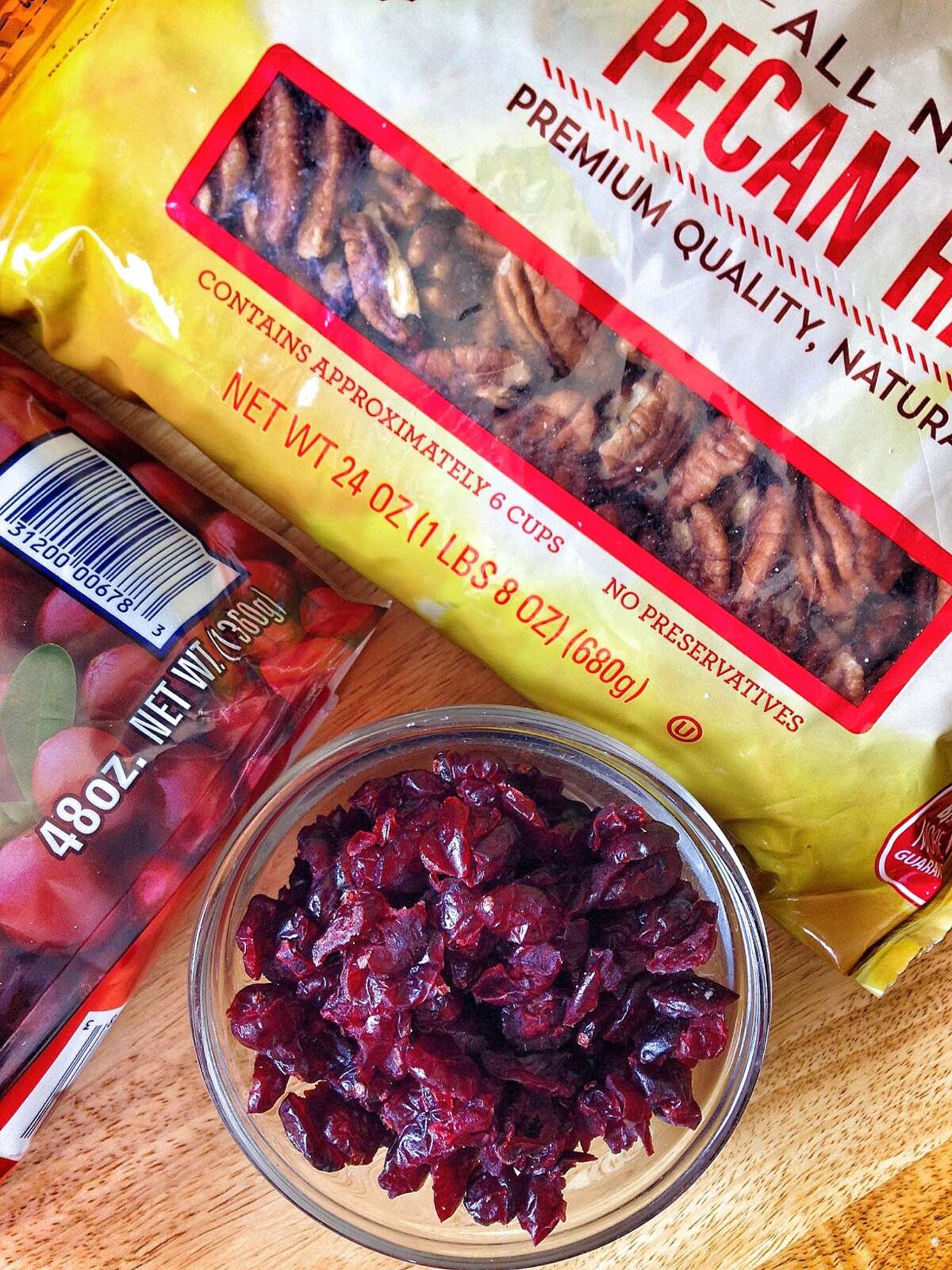 Granola has a long shelf life, so it makes total sense to make a lot of it at once. To save money on potentially expensive ingredients like fruit and nuts, access club stores, restaurant supply markets, or other places where you can buy in bulk. 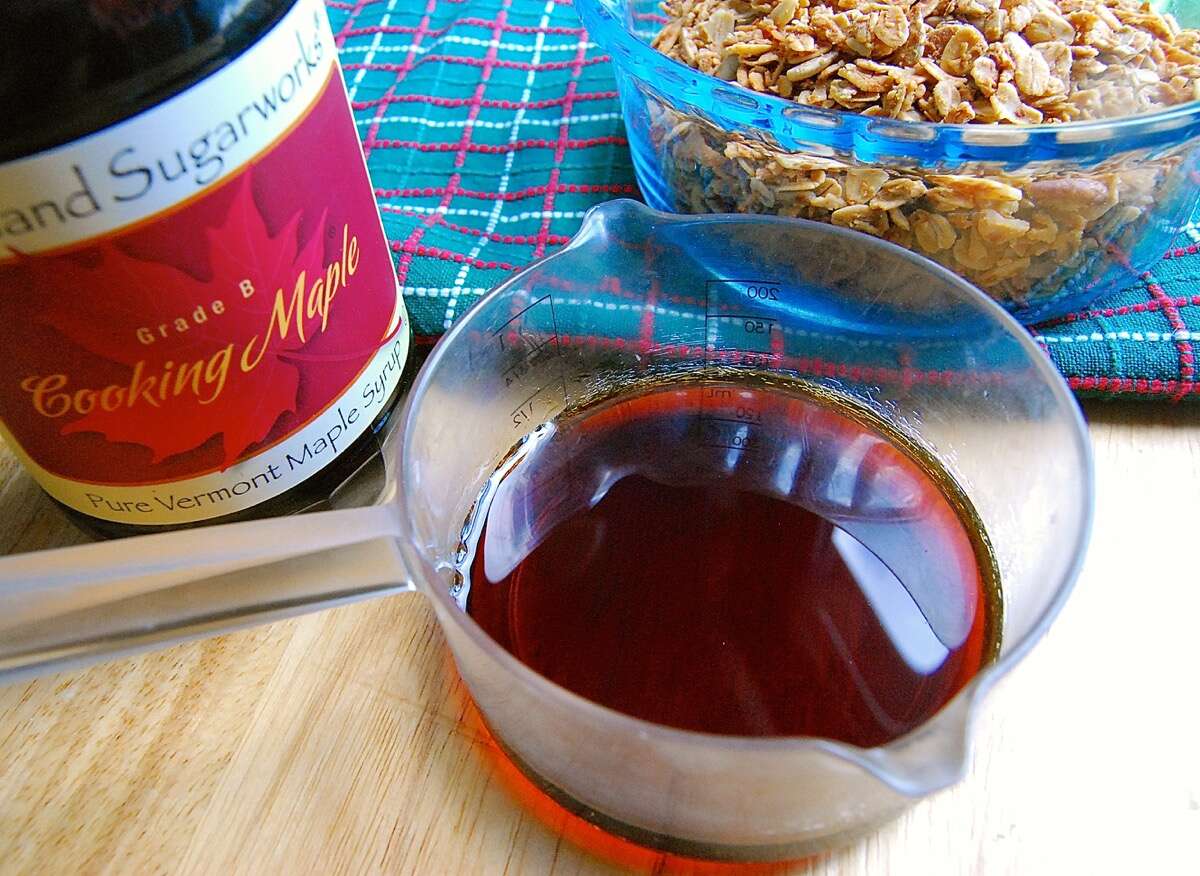 2. Sweeten granola with a "real" sweetener.

We use all-natural, 100% pure maple syrup to sweeten granola. While its flavor is mild, its sweetness is potent; substituting artificial maple syrup leaves granola tasting flat and bland.

If you don't like maple syrup, use honey; or agave syrup, or 100% cane syrup; but please avoid anything artificial. 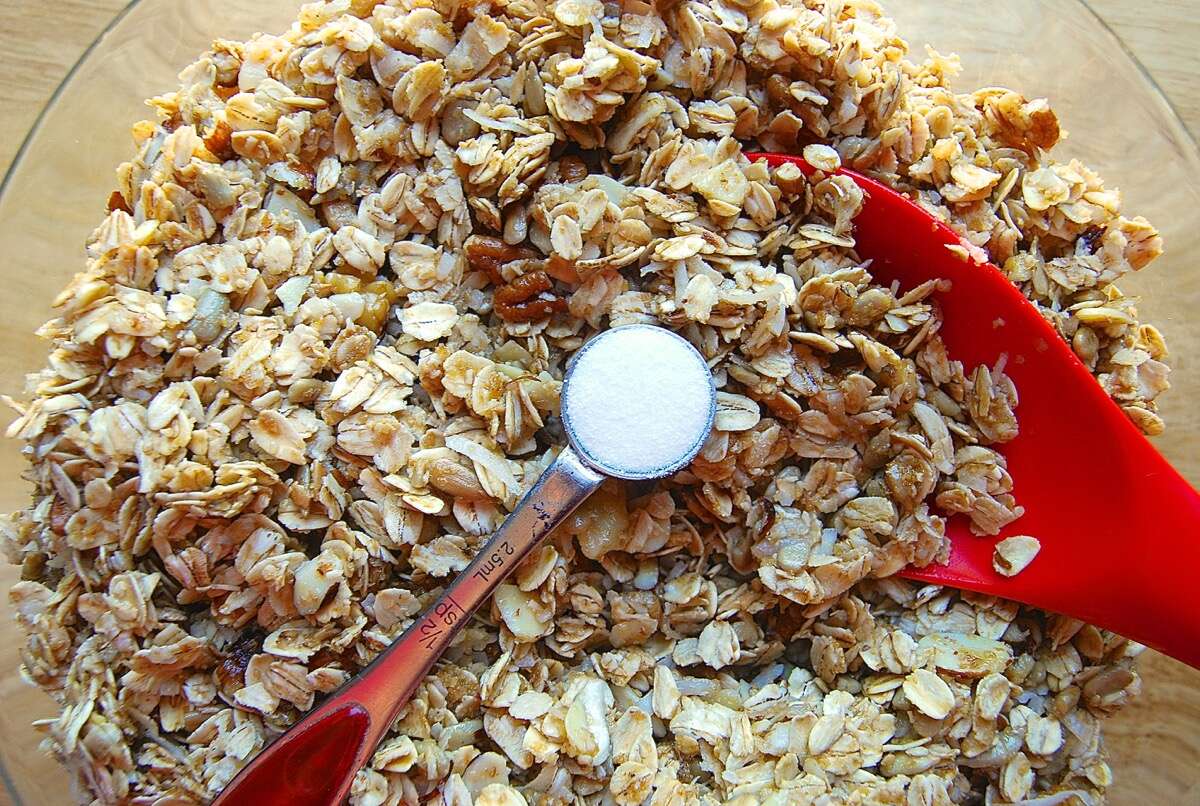 3. Mix salt with the wet ingredients – not the dry.

If you stir salt into granola with the oats, seeds, nuts, and other dry ingredients, it'll sift through everything and collect in the bottom of the bowl. Instead, mix salt with the oil, liquid sweetener, and any other liquid ingredients. That way, it'll be evenly distributed throughout the mixture. 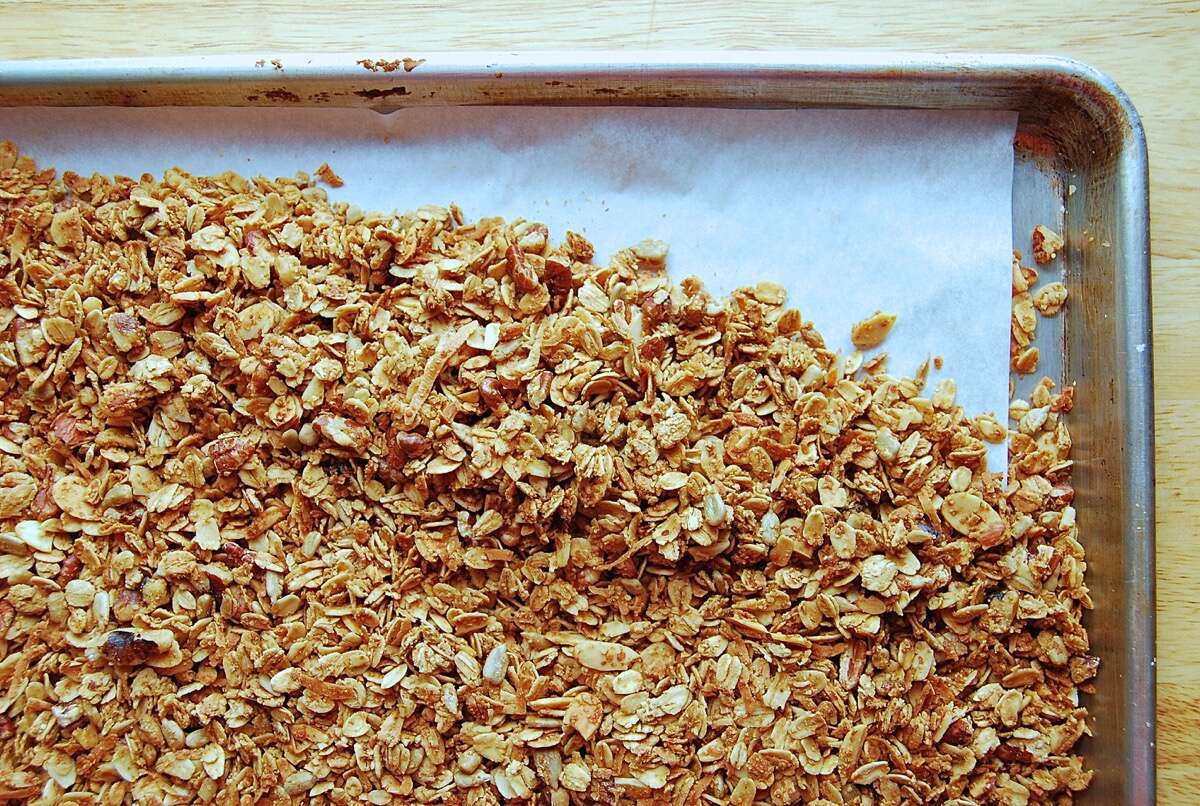 While granola certainly isn't as sticky as brownies or cake, it does have a tendency to become hard and crusty as it bakes – which, after all, is the goal. To prevent having to scrub a crusty pan, line the pan with parchment before spreading it with granola. 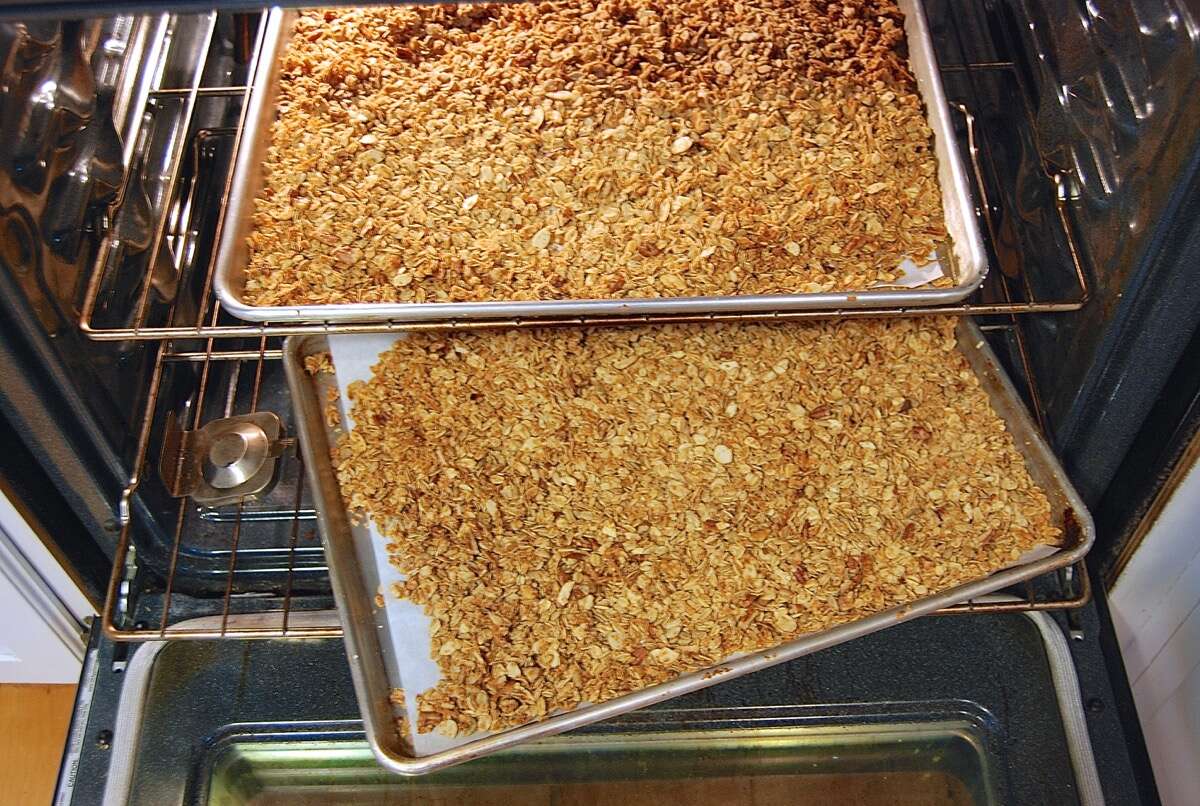 5. To ensure even baking, rotate the pans in the oven.

To prevent over-browning of granola, rotate the pans in the oven every 15 minutes: top to bottom, front to back.

During this process, lift the edges of the parchment to redistribute the granola around the edges to the center, stirring to help move the center granola out towards the edges; this helps it all bake evenly. 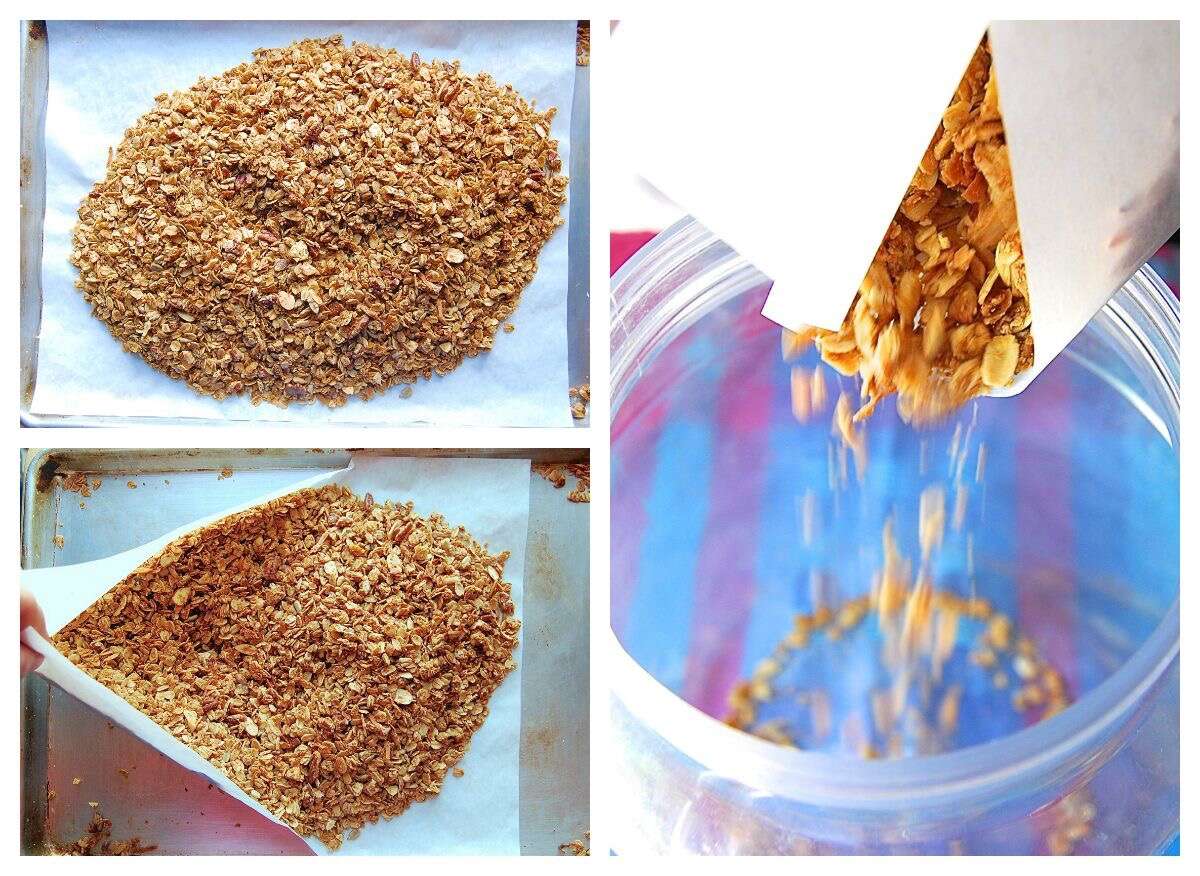 6. Use parchment to transport homemade granola without spills.

Another benefit to using parchment: it's a great tool for transferring baked, cooled granola into a container. 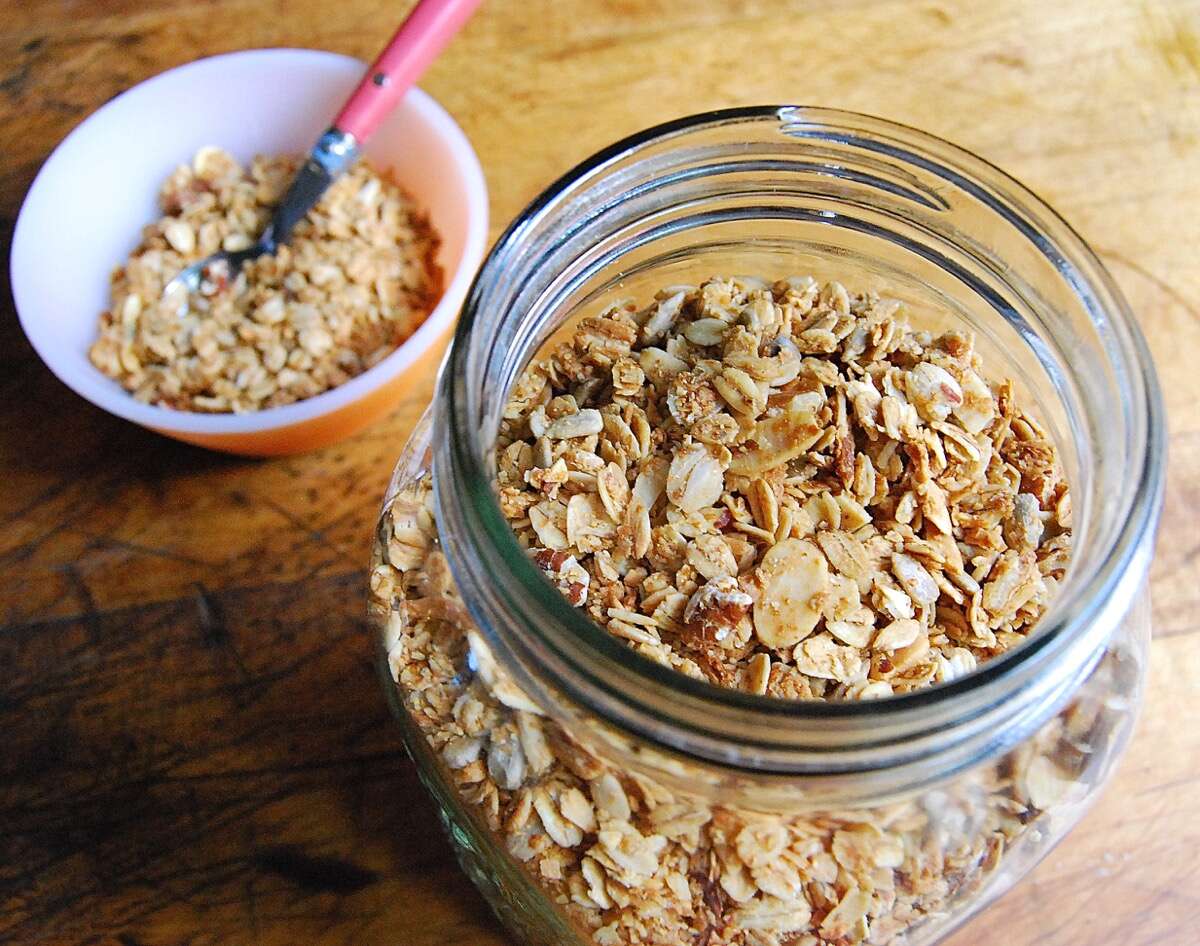 I prefer using a couple of large (quart-size or larger) glass mason jars for granola storage. They're airtight, non-reactive, and I can easily see how much granola is left.

A jar of granola sitting on the counter or table is also attractive; it gives your kitchen a rustic, homey feel. (I can't believe I just said that: me, the anti-Martha Stewart!) 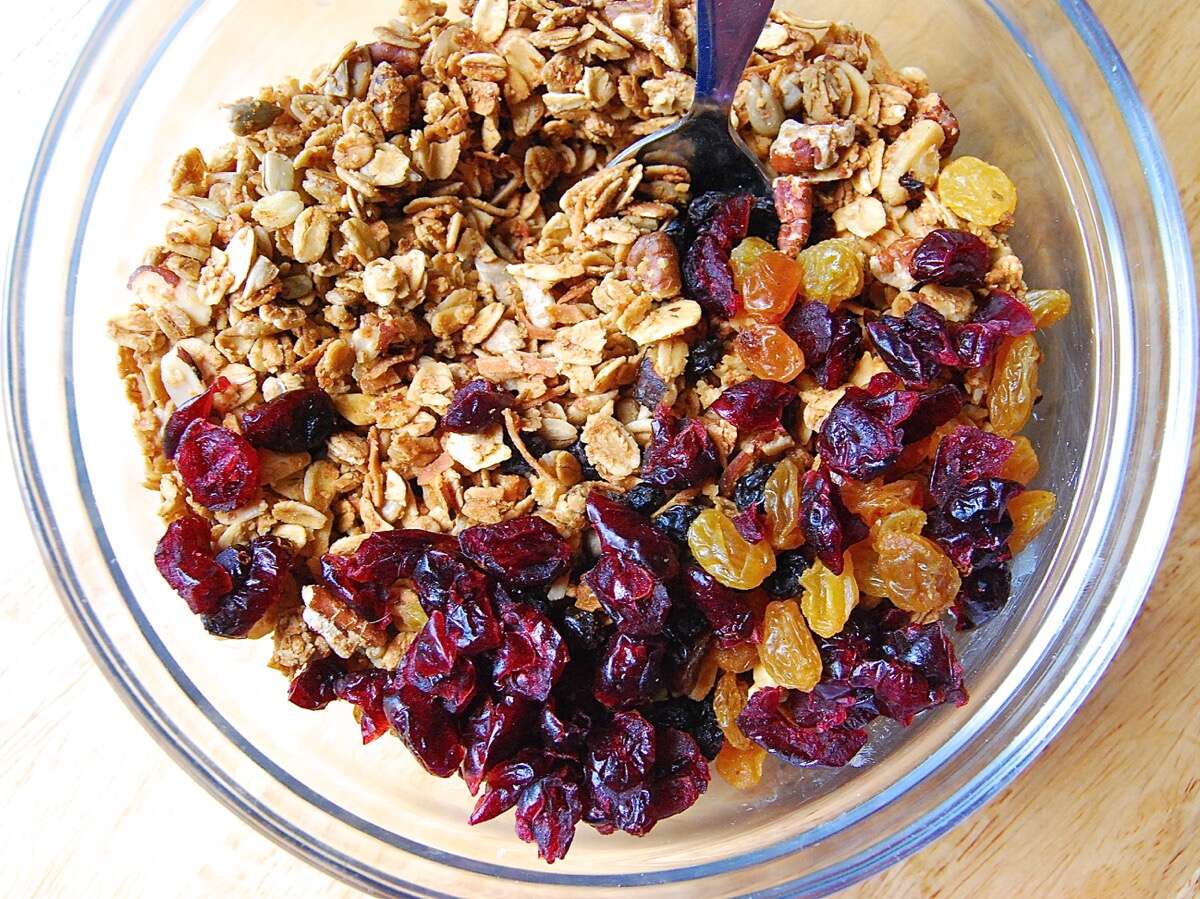 Dried fruit doesn't have as long a shelf life as plain granola; raisins, dried cranberries, etc. will start to dry out and harden up within a few weeks.

Unless you plan on eating all of the granola fairly quickly (or giving it away as gifts), stir in a scoop of dried fruit weekly, rather than immediately after baking. 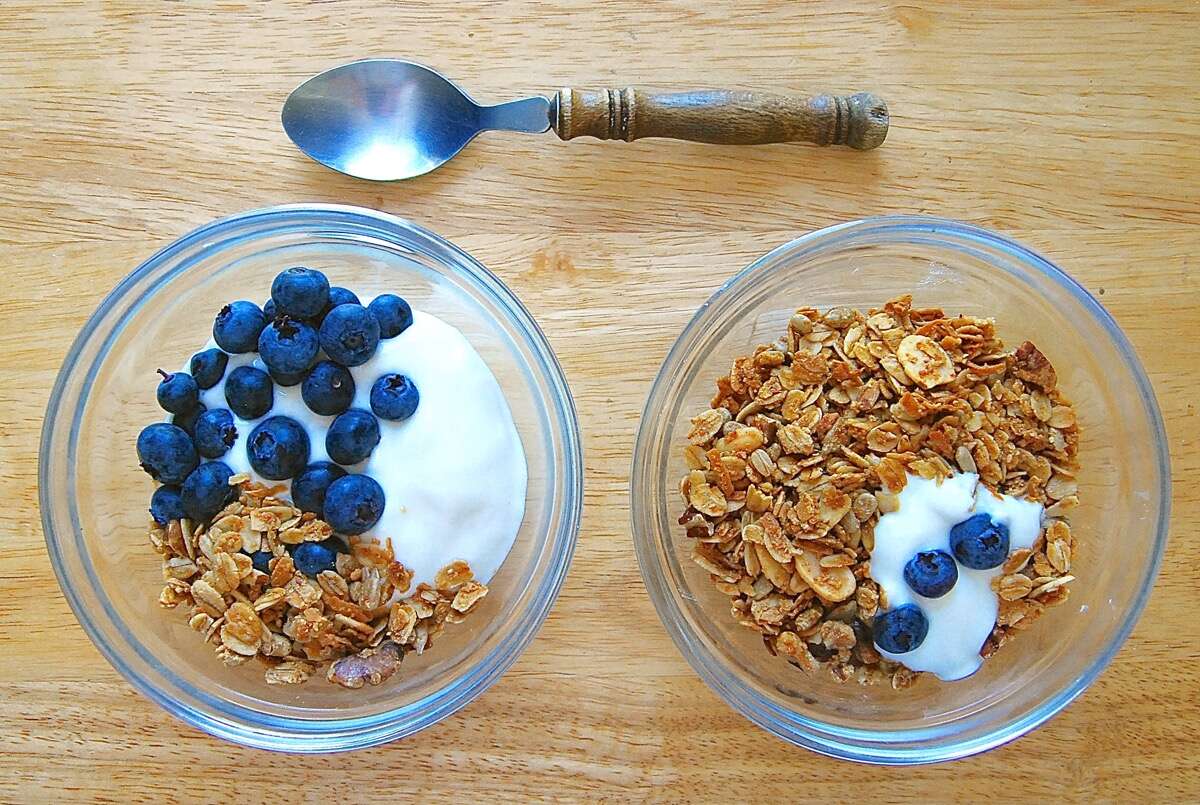 A big bowl of granola with a garnish of yogurt and a few berries – YUM! But granola can be loaded with calories. Yes, it's full of fiber and whole grains and nuts and seeds and all kinds of healthy ingredients, but none of them are low-calorie.

If you're watching your waistline, consider granola a garnish, rather than the main event. A big bowl of low-fat yogurt, lots of berries, and a couple of spoonfuls of granola? YUM! And many fewer calories.

Please read, rate, and review our recipe for Crunchy Granola.

I started making granola in the '70's, and I've never stopped! I started with my mom's recipe, which also included powdered milk. I've made dozens of recipe for it since then, including most or all of King Arthurs's! Some food trends deserve to live on! My kids love it, too, and are always happy when I have a jar or bag to share. I think making granola is one of those foods is one of those immensely gratifying events in my kitchen! And like homegrown tomatoes vs hot house tomatoes, there is NOTHING LIKE HOMEMADE GRANOLA!
I just saw this post, after making a batch of granola today. The maple granola from the King Arthur Whole Grain Baking cookbook has been one of my favorites since the book came out, and I make a batch every month or so (with the coconut), enjoying it with homemade yogurt. I've adjusted the recipe over time with the main differences being I use 8 cups oats, 2/3 c maple syrup and 2/3 c olive oil. Thanks for another great recipe. :-)
Talk about a blast from the past! I will not forget the first time I tried granola back in the 70's. It was the best thing since, well I guess homemade whole wheat bread (that I learned to make in the decade of the 60's!
Women are still waiting for "finally gaining legal equality with men". The proposed amendment was never ratified by enough states for it to be the law of the land.
Susan, thanks for offering this correction! Barb@KAF