If you're a Boomer, you almost certainly remember the tumultuous 1960s. The oldest members of the Baby Boomer generation graduated from high school in 1964 – the same year the youngest ones were born.

1964 was a pivotal year. The war in Vietnam, an event that would define our childhood and young adulthood, was still a small conflict somewhere in the Far East. Elvis was shocking our parents, but crew-cut Pat Boone continued to croon as well.

The Beatles? On February 9, 1964, 70 million people tuned in on their rabbit-eared black and white television sets to watch the Fab Four's American debut on the Ed Sullivan show. Their final number, "I Want to Hold Your Hand," represented the typical first step in the American girl's life plan: love, marriage, motherhood.

Stay-at-home mom? They were the norm, not some new societal trend.

Moms cleaned the house, did laundry, checked homework and, of course, prepared meals – three a day, plus probably an after-school snack as well. Lunches got packed in brown paper sacks; dinner was a sit-down affair, usually served as soon as Dad walked in the door from his job.

And breakfast? You ate it at the table, from a plate (bacon and eggs) or bowl (cereal). Breakfast on the run? No such thing.

"You can eat ’em in the dark, eat ’em in the park, eat ’em in a rollercoaster..." when the introductory TV ad. In other words, forget anchoring yourself to the breakfast table. Once you pop these babies out of Milton the Toaster (remember him?), a simple "May I be excused?" and you're free to go.

No need to push scrambled eggs around the plate or listlessly spoon up lukewarm oatmeal. No, Pop-Tart in hand, you can crash out the door into a waiting gaggle of kids, ready to enjoy a Saturday of kickball, bike-riding, and a trip to the drugstore for a package of Twinkies and the latest Superman comic. 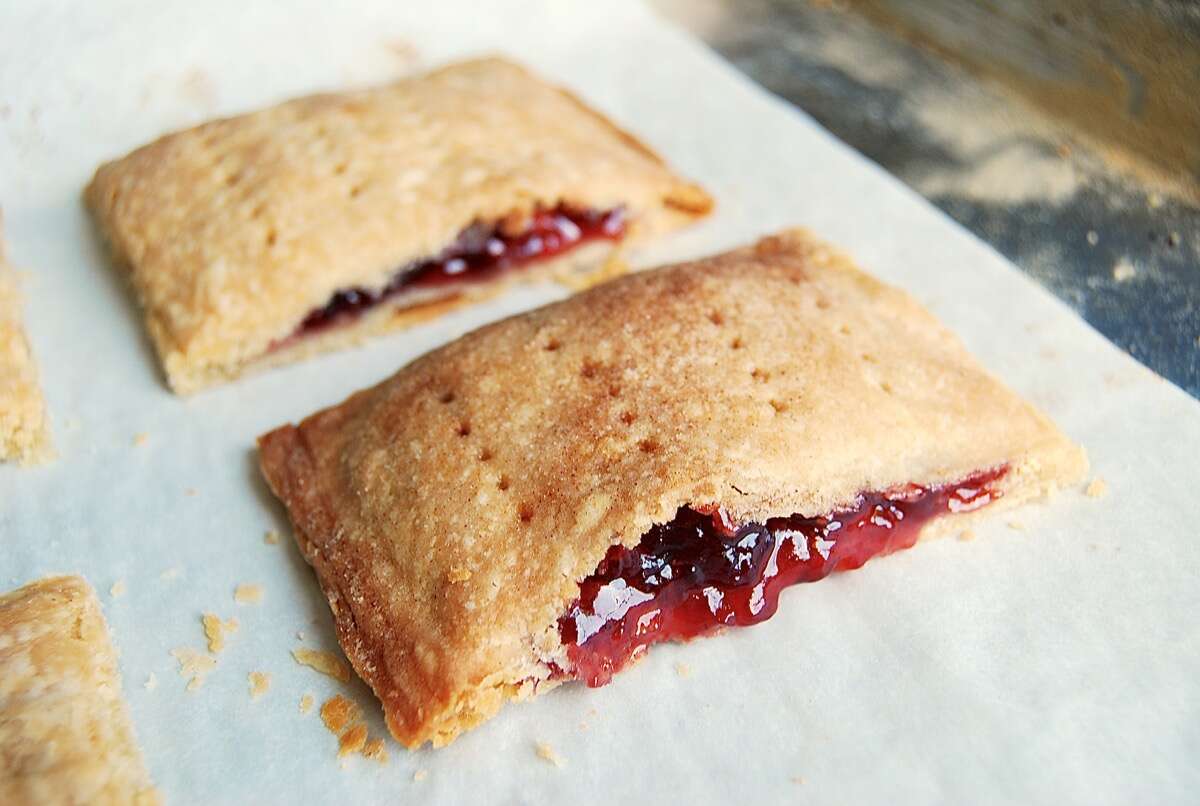 Though I did test strawberry, too – in a nod to the original four flavors.

After all, these pastries are nothing more than pie crust sandwiched around a thin layer of fruit (or brown sugar) filling.

I can do that – and so can you. With one caveat: remember, Boomers, this isn't 1964, and you're not the kid you used to be. We're all looking to eat just a touch healthier these days. So this whole-grain version of our Tasty Toaster Tart recipe is 50% whole wheat, and 30% lower in fat than the original.

We can live with that, right? 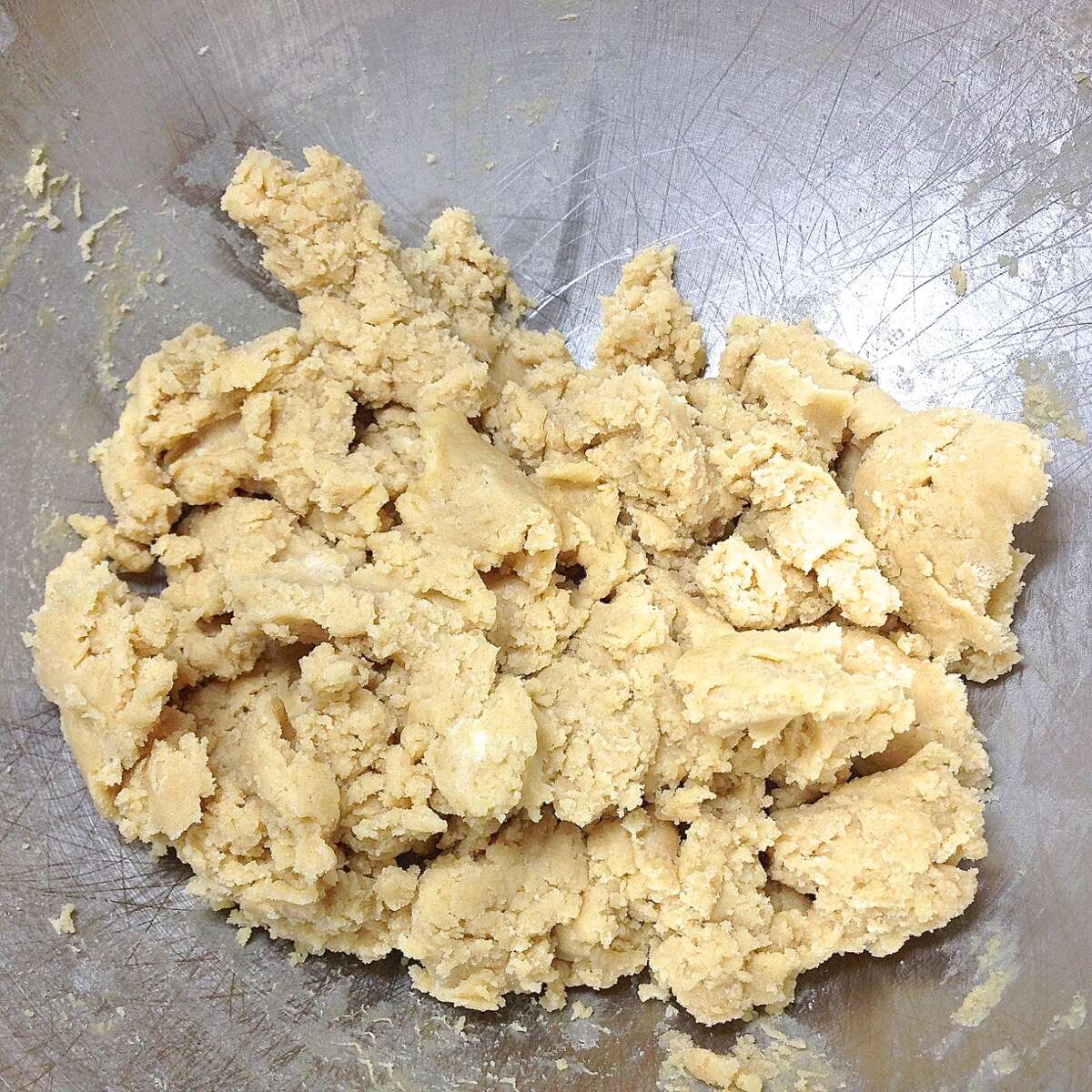 Whisk together the flours, sugar, and salt. Add the shortening, mixing until everything is evenly crumbly. Then work in the butter, leaving some larger, pecan-sized pieces.

Mix the egg and the milk. Drizzle it into the dough as you mix, adding just enough to bring the dough together. It will be cohesive, but not wet or sticky. Stir in an additional tablespoon of milk, if necessary. 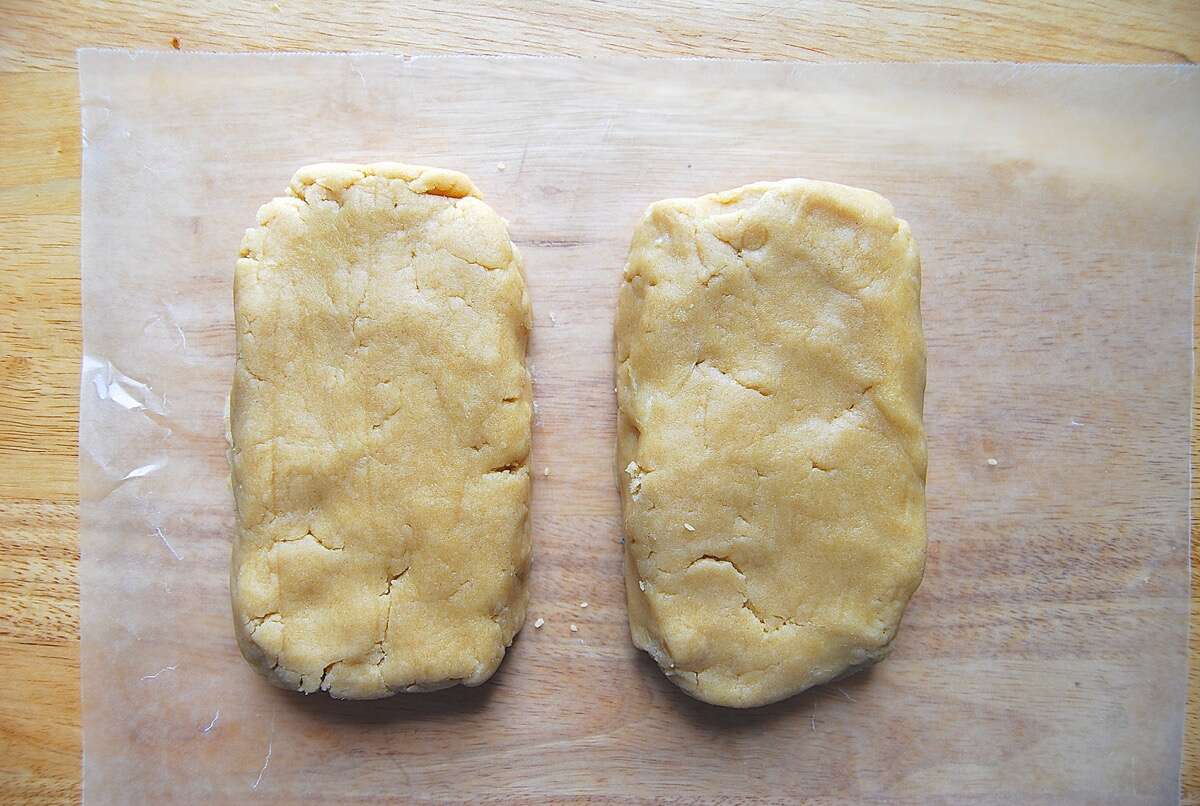 Divide the dough in half. Shape each half into a rough 3" x 5" rectangle, smoothing the edges. Wrap in plastic or waxed paper, and refrigerate for 30 minutes; this will relax the gluten and firm up the dough a bit, making it easier to roll.

You can also refrigerate the dough for up to 2 days; let it rest for 15 to 20 minutes at room temperature before you roll it out. 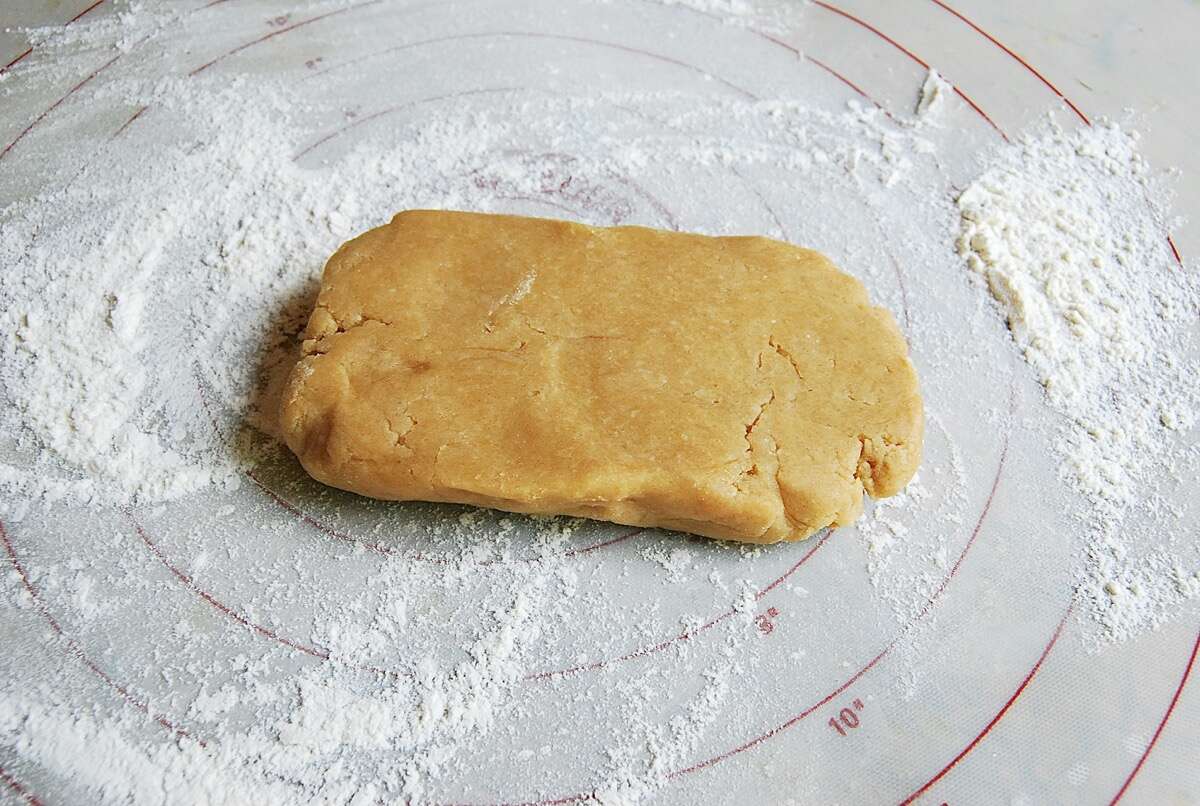 Place one piece of dough on a generously floured work surface; I like this silicone rolling mat, which helps keep cleanup to a minimum. 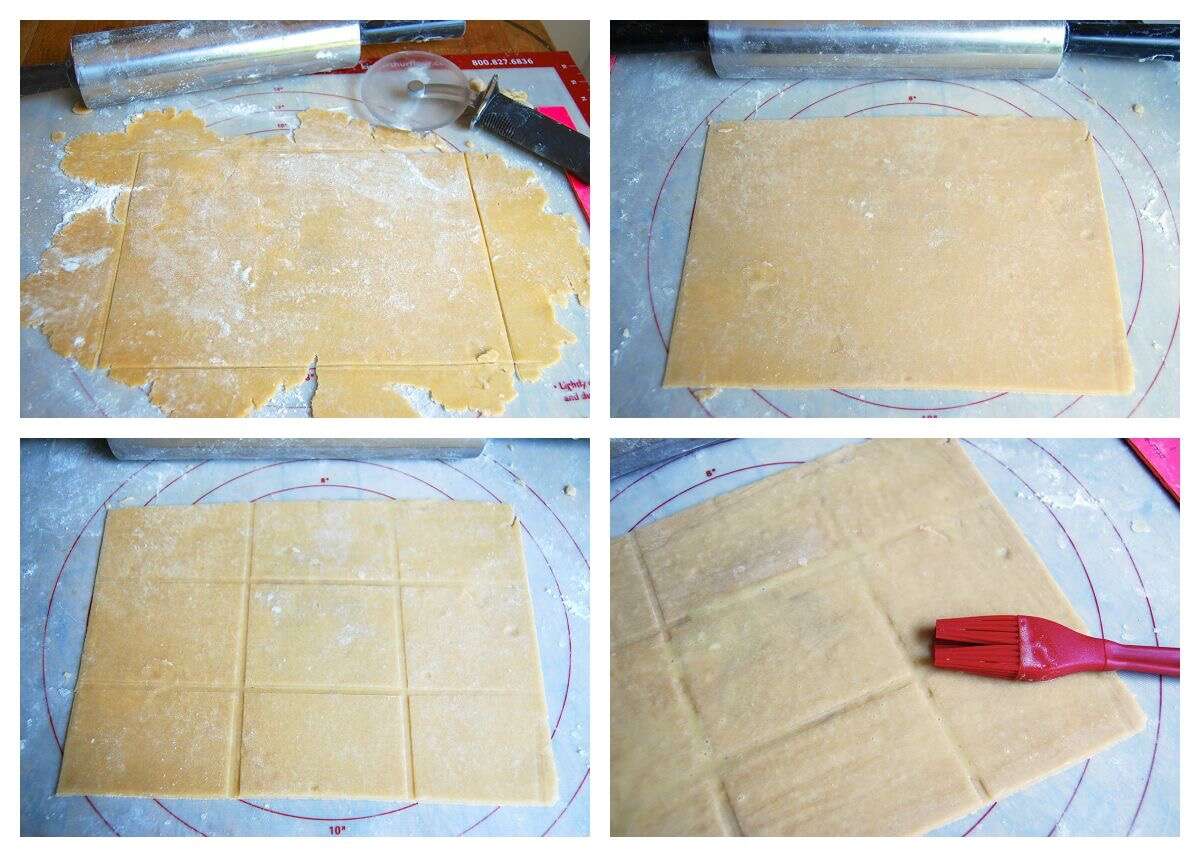 Roll the dough into a rectangle about 1/8" thick, large enough that you can trim it to an even 9" x 12". Trim off the edges; place the scraps on a baking sheet, and set them aside, along with the 9" x 12" rectangle of dough.

Press the edge of a ruler into the dough, to gently score it in thirds lengthwise and widthwise; you’ll see nine 3" x 4" rectangles.

Beat 1 large egg, and brush it over the entire surface of the dough; you won't use all of the egg. 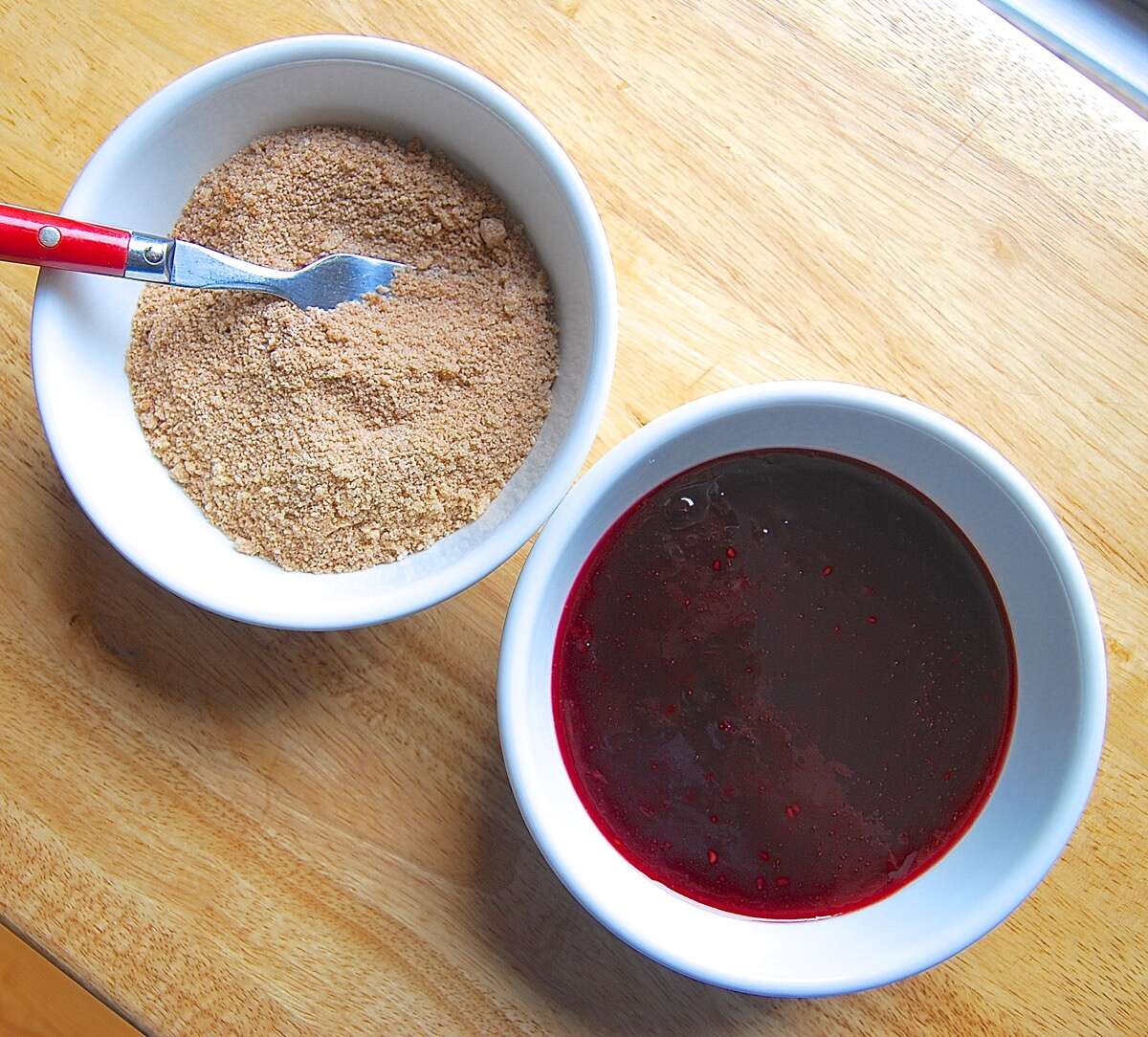 I'm trying two fillings: brown sugar cinnamon and strawberry. Each of the amounts below will make enough for an entire recipe of toaster tarts, so choose one – or make a double batch of pastry.

Bring the jam and cornstarch/water to a boil in a small saucepan and simmer, stirring, for 2 minutes. Remove from the heat, and set aside to cool.

Roll the second piece of dough, and cut it into a 9" x 12" rectangle, same as you did the first piece. 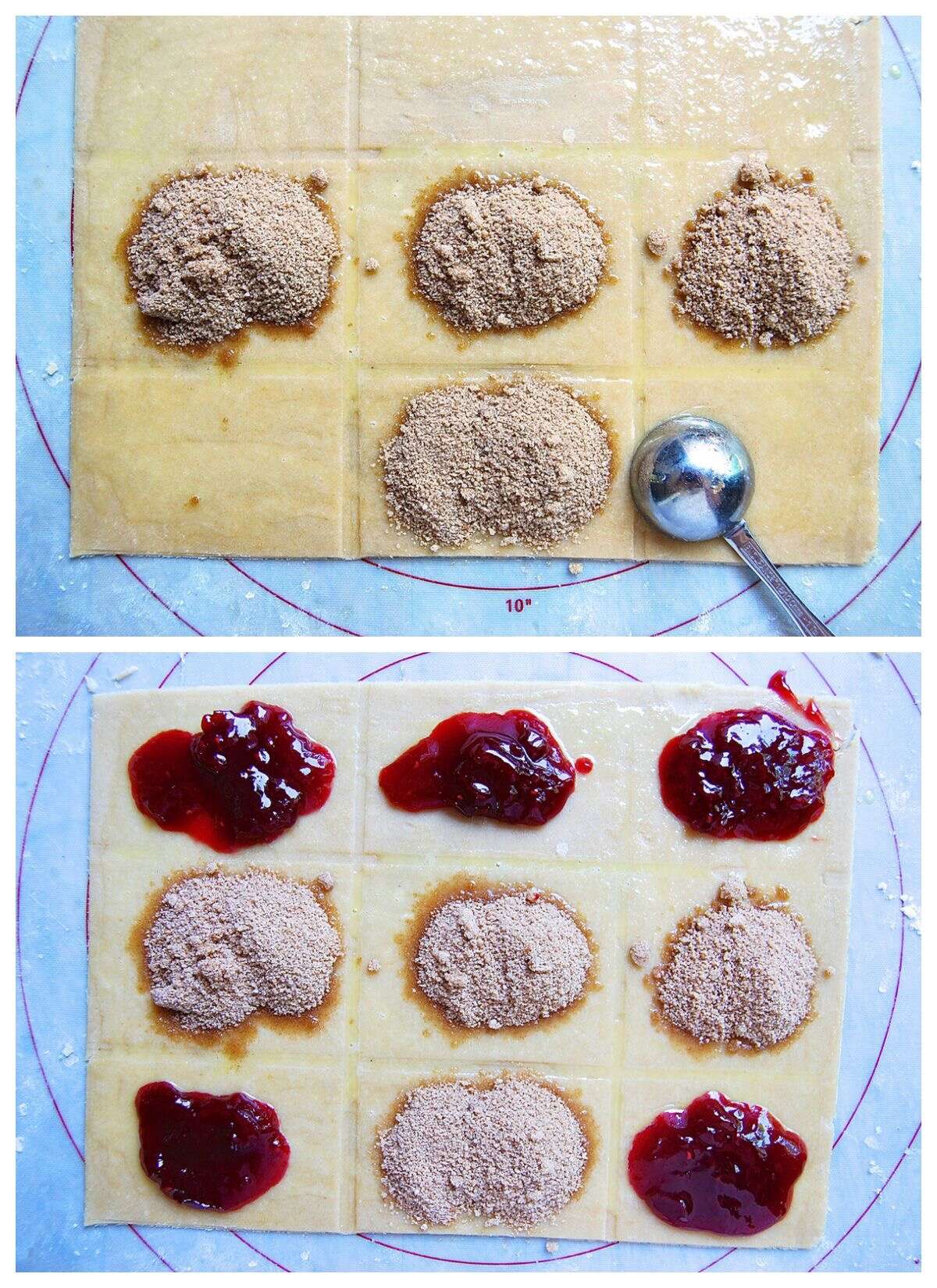 Place a heaping tablespoon of filling into the center of each marked rectangle. If you're using jam, try to keep it in the center of the rectangle, away from the edges.

Carefully lay the second piece of pastry on top. 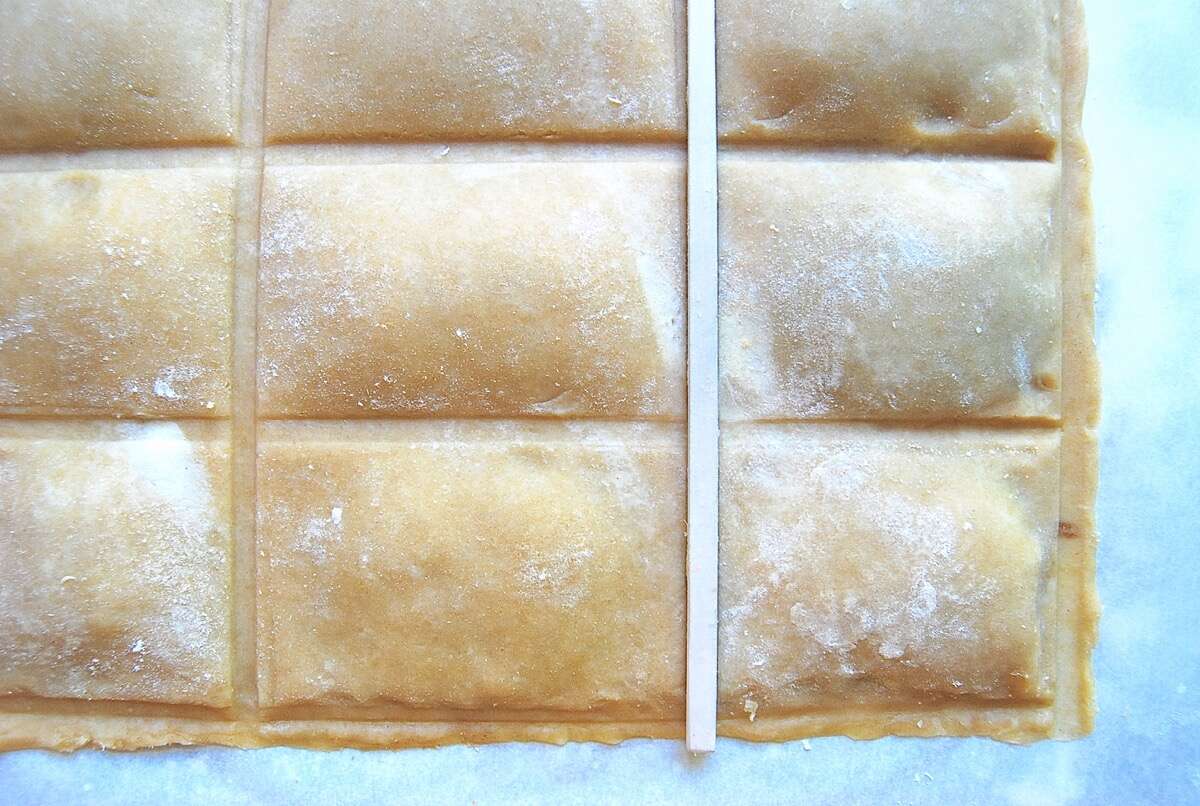 Use a chopstick, dull ruler edge, or other blunt, straight object to seal the filling into its separate tarts. Press down firmly; you want a good seal.

Press the outside edges tightly to seal, as well. 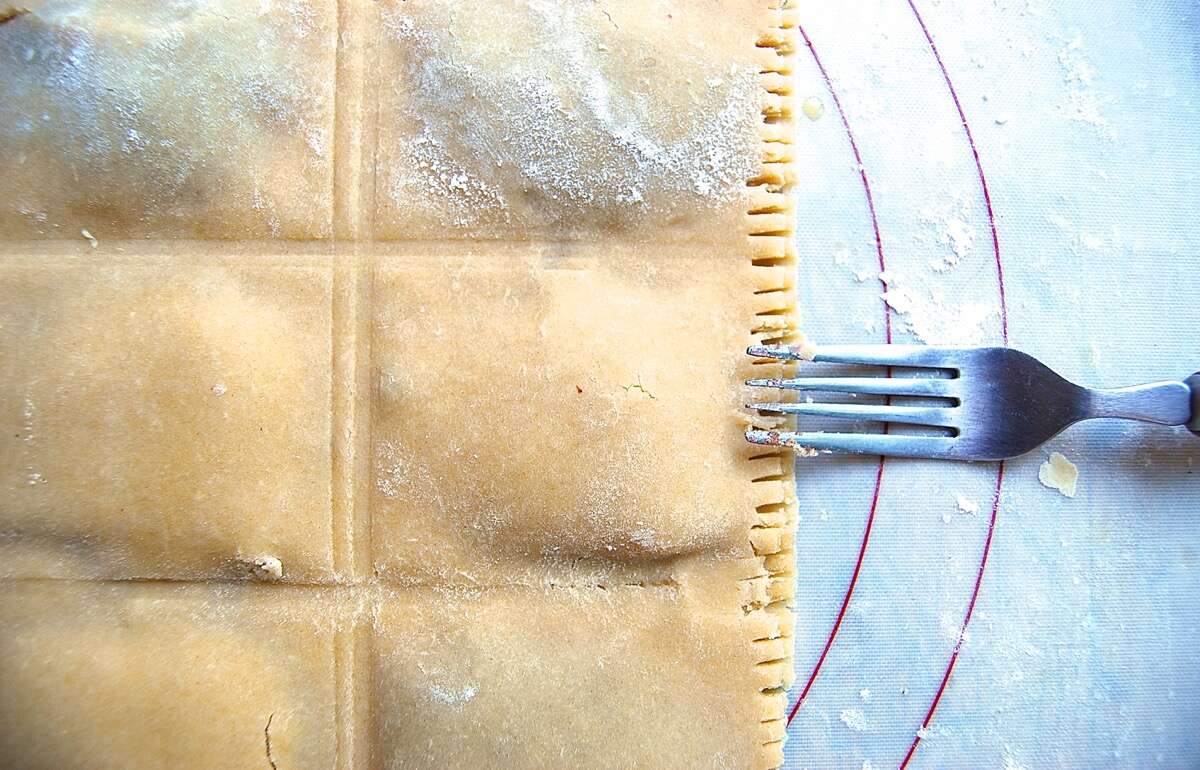 If you want a fancier edge, press with the tines of a fork. 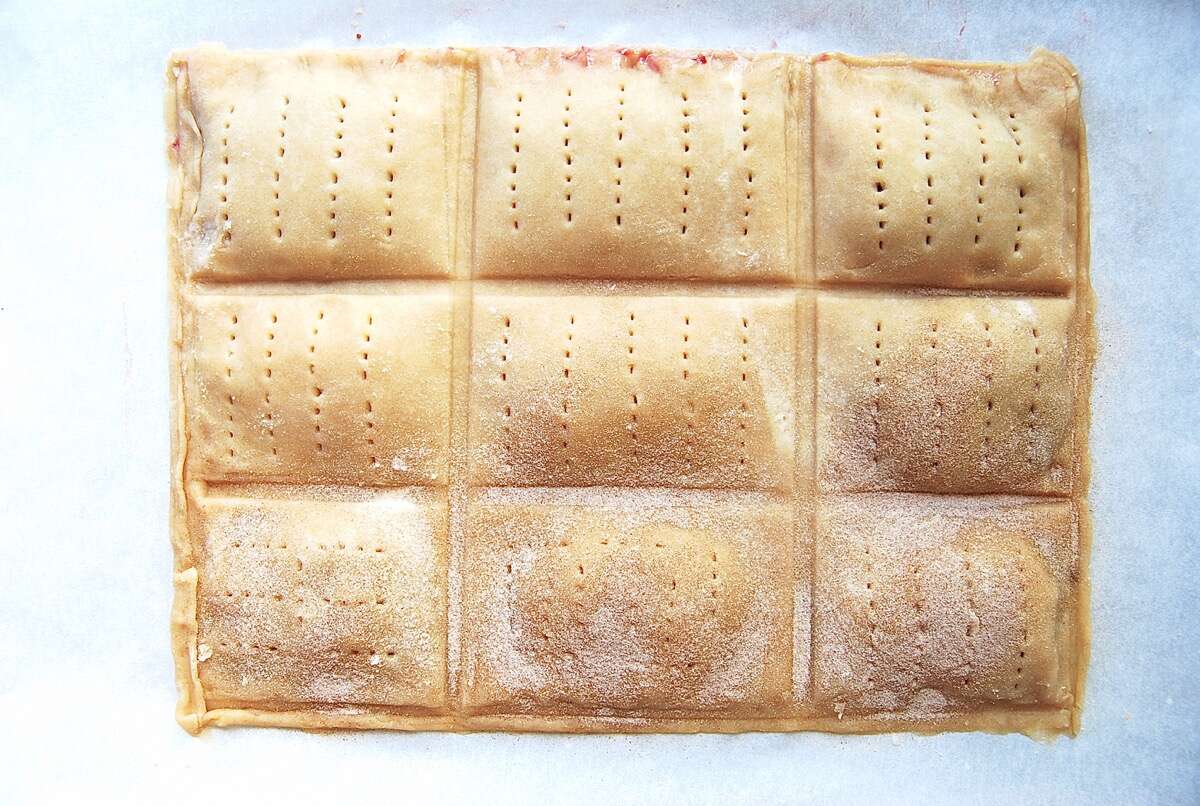 Prick the top of each tart multiple times with a fork; you want to make sure steam can escape, or the tarts will become billowy pillows rather than flat toaster pastries.This also helps prevent the filling from leaking out.

Refrigerate the tarts (they don’t need to be covered) for 30 minutes, while you preheat your oven to 350°F.

Now, if you're following our online recipe, you'll notice I've diverged from the directions here. The original recipe calls for separating the nine tarts before baking, sealing around all four edges of each.

I figured, why make extra work? Bake the tarts as a single sheet, then separate them once they're baked. We'll see how that turned out shortly.

Note: Remember those dough trimmings you set aside? Sprinkle them with cinnamon-sugar (or any leftover brown sugar filling); these have nothing to do with your toaster pastries, but it’s a shame to discard them, and they make a wonderful snack. While the tarts are chilling, bake these trimmings for 13 to 15 minutes, until they’re golden brown. 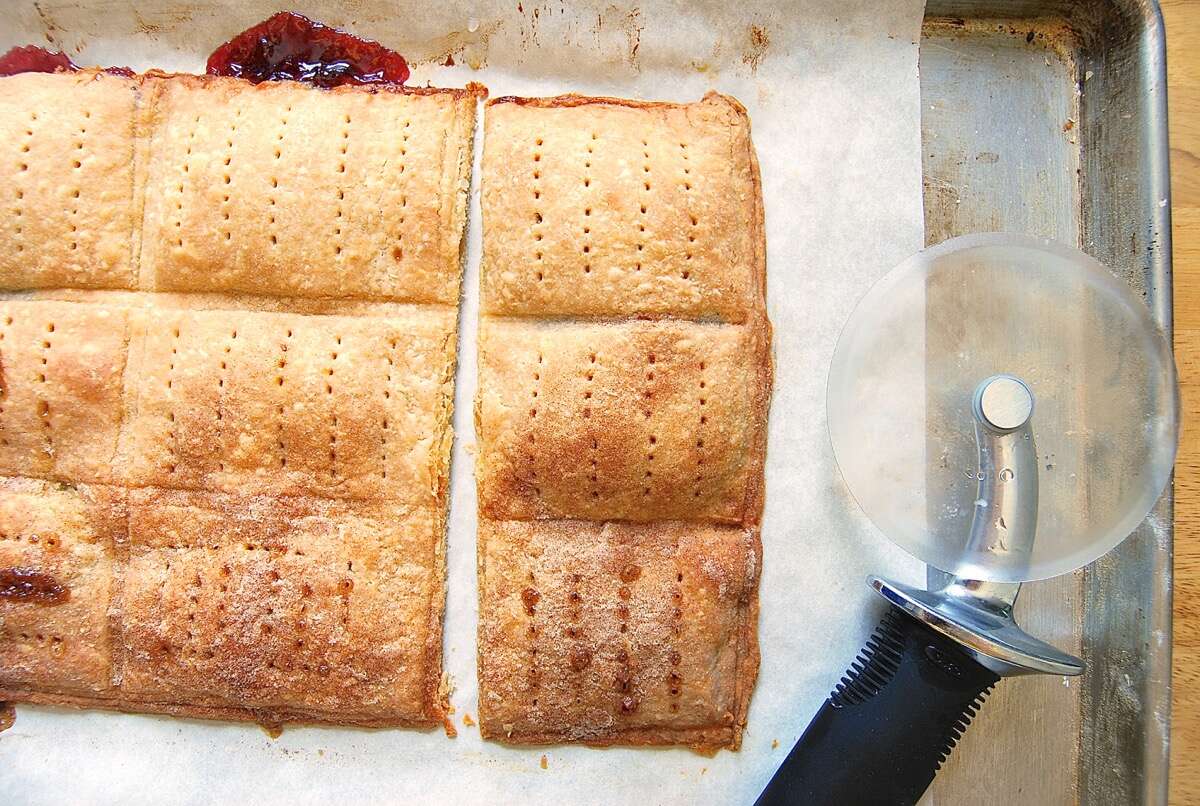 Remove the tarts from the fridge, and bake them for 25 to 35 minutes, until they’re a light golden brown. Remove them from the oven, and allow them to cool on the pan.

If you've baked them in a single sheet, cut them apart while still warm. 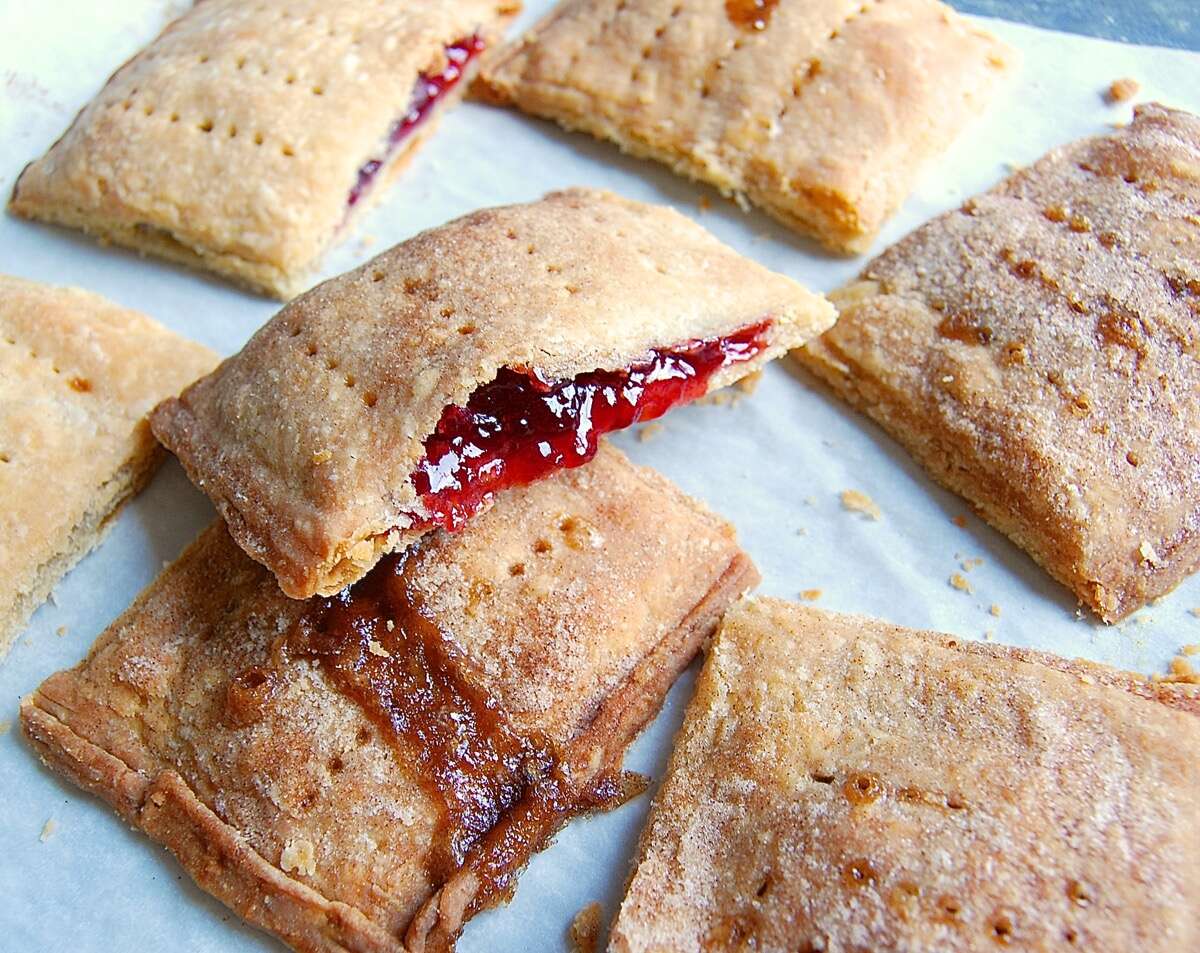 Also, notice I did have just a bit of filling leakage – but only on the couple of tarts I didn't vent thoroughly enough. 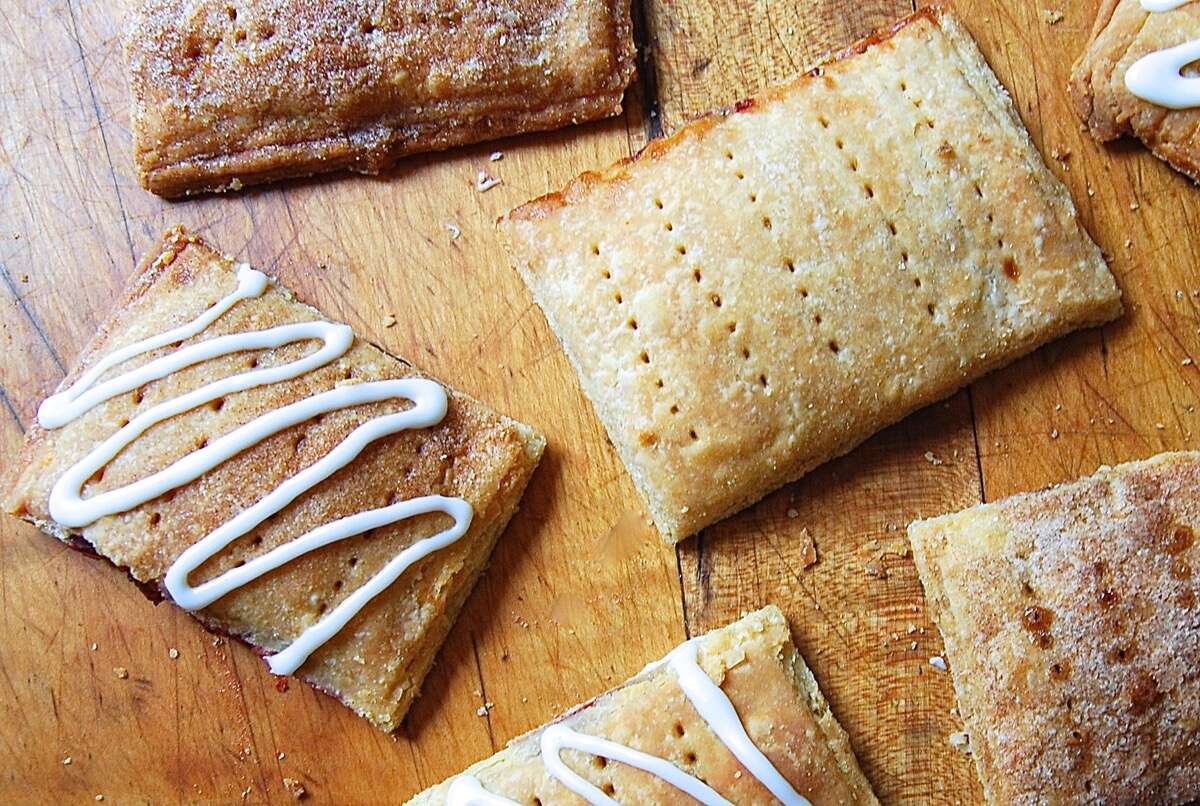 Now, how about popping these into the toaster? If their edges are sealed well enough, go for it; just don't toast for too long, as you never know when your handmade (as opposed to machine-stamped) tart may spring a leak. I'd say a toaster oven, with a pan underneath, would be more fail-safe.

Or after dinner, relaxing in your favorite easy chair with a cup of coffee. For many of us older Boomers, the allure of Pop-Tarts remains; but the call to action is fainter than it used to be, for sure!

What was your usual (or favorite) high school breakfast? Share with us all in comments, below.

In the ingredients it says nothing about shortening but in the Method it says ** Add the shortening, mixing until everything is evenly crumbly. Then work in the butter, leaving some larger, pecan-sized pieces.
Which one is correct please?

Thanks bunches for these blogs. Reading the recipe and seeing the development at various steps are so helpful.
Glad you enjoy them, Wanda. I certainly had a fun time writing them! :) PJH
I would rather not use piecrust---can you come up with a recipe made with whole grain bread dough? Would making whole grain tortillas for the filling work? (and baking like the piecrust...) PJ taught her son to make bread over the phone!---surely this will be no problem for her and the others at KAF!! Thank you.
Interesting question, Tanya. We're having trouble imagining how a bread dough or tortilla could work in quite the same way, but we'll certainly hang on to the idea as food for thought. If you decide to give some alternative version a try, we'd love to hear how it goes. Happy baking! Mollie@KAF
At the point where you refrigerate these, could I leave them Overnight to bake fresh in the morning for a quicker breakfast? Thanks!
Yes, you may refrigerate the dough overnight or for up to 2 days for freshly baked pastries in the AM! Elisabeth@KAF
Can't wait to try these. We like strawberry unfrosted the best and slathered with butter, oops! Hubby still buys them once in a while. And pie crust rollups are a favorite at our place. Always made these to go along with chicken pot pie-Yum! These may make it to our Sunday evening snacks this week. Thanks for an easy recipe!
it calls for a cup of each flour but next to it it says 4oz , i thought a cup was 8 oz so are we using 1 cup of flour or 2 cups of flour ?