It's also well-known that the cinnamon-y smell of an apple pie in the oven is a wildly effective home-sales tool; brokers often advise those having an open house to throw a pie into the oven just as prospective buyers start knocking on the door.

Bottom line: who can resist the smell and flavor of cinnamon? Particularly top-quality Vietnamese cinnamon, whose higher-than-normal oil content gives it over-the-top flavor, and the ability to thoroughly permeate anything to which it's added.

Think apple desserts. Snickerdoodles. Coffeecake. And, of course, these tender, buttery muffins. With cinnamon in their topping; rich, thick cinnamon filling, plus cinnamon chips in the batter, they're a veritable cinnamon-y symphony.

Want to bring every guy in the house into the kitchen? Bake up a batch of these babies, and see what happens!

Preheat your oven to 400°F. Line a 12-cup muffin pan with cupcake papers, or grease it lightly.

Let's start with the streusel topping and the filling. 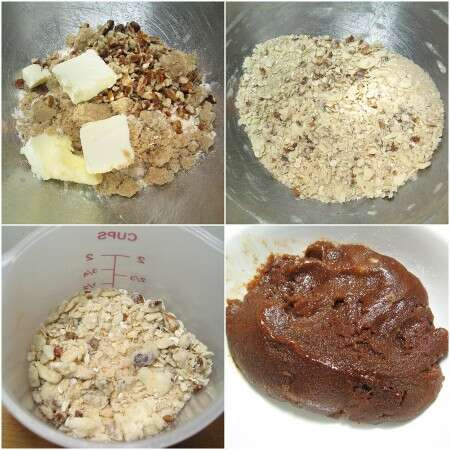 Mix the following ingredients until crumbly:

I like to put topping into a measuring cup once it's mixed, so I can easily see how much I should sprinkle onto each muffin. Looks like just about 1 1/2 cups topping – which would be about 2 tablespoons topping per muffin.

Now, how come there's no cinnamon in the topping, if these muffins are supposed to be all about cinnamon? Well, there can be, for sure; add 1/2 teaspoon if you're a true cinnamon devotée. But I find the "plain" streusel is a nice counterpoint to the rest of the cinnamon-rich muffin.

You have two choices for filling.

If you don't have any cinnamon filling in your pantry, give it a try sometime; you'll fall in love with it, I promise. But in the meantime, you can make an approximation by mixing 3 tablespoons melted butter, 1/2 cup brown sugar, and 1 1/2 tablespoons ground cinnamon. That's it; don't add any water.

Next up: the batter. 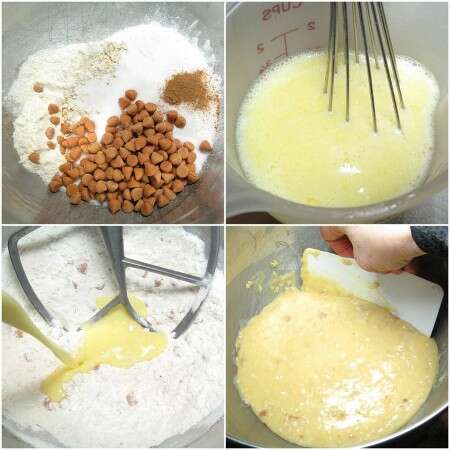 In a measuring cup or bowl, whisk together the following:

Add the liquid mixture to the dry, stirring just until combined. Be sure to scrape the sides and bottom of the bowl to incorporate any sticky residue. 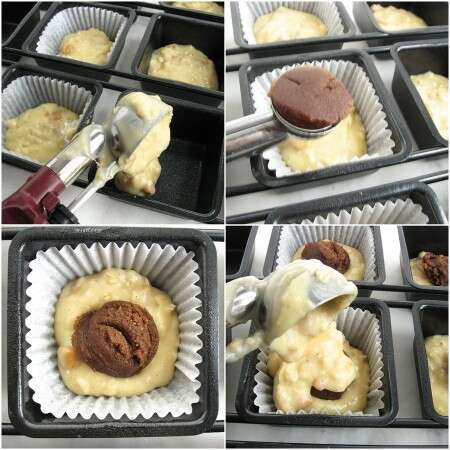 Divide half the batter evenly among the muffin cups. A heaped tablespoon cookie scoop (photo, top left) is just about the right amount for each cup.

Rather than drop it onto the batter in a big lump, as I did, use the teaspoon scoop as a measure, then crumble the filling over the surface of the batter. That way, you'll get more edge-to-edge coverage.

Top the muffins with the remaining batter, spreading it to cover the filling if necessary.

Notice the square muffin pan I'm using here; it's slick – both literally, and figuratively. I lined some of the cups with paper liners, to see how a round liner would do in a square cup. The answer is: just fine. 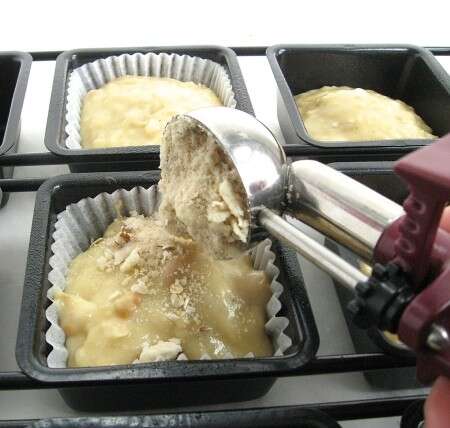 Sprinkle generously with the topping, pressing it in lightly. 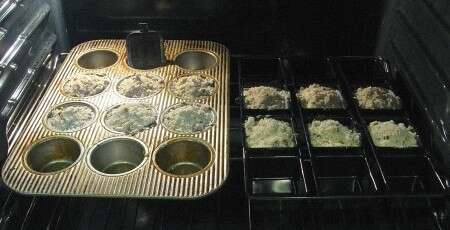 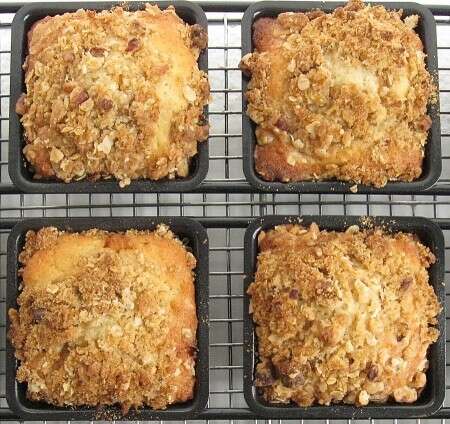 ...or until they're golden brown. Remove the muffins from the oven, and wait 5 minutes before transferring them from the pan to a rack to cool.

OK, hold on – what's with the other muffin pan in the oven?

Just another test I was doing. Is the capacity of this square pan the same as a standard muffin pan? Yes.

And, do paper liners make a difference? In the standard pan, liners make the muffins a little bit easier to get out of the pan; they don't make any difference in the square pan. 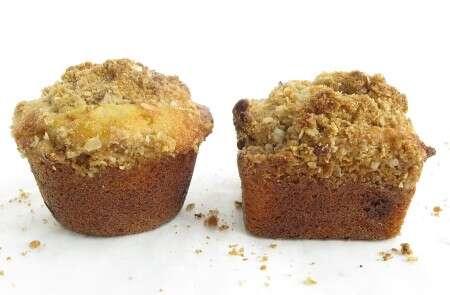 And here they are, in two delicious incarnations.

You know what they say – it's hip to be square! 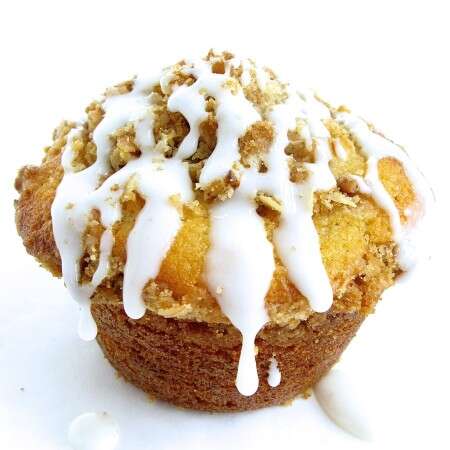 While it's totally optional, a drizzle of icing atop the cooled muffins is a felicitous final touch. Mix 2/3 cup confectioners' sugar, a pinch of salt, and 1 tablespoon milk, or enough to create a pourable glaze. Spoon/drizzle it over the cooled muffins.

I am GF. Could you use the Measure for Measure flour for this?

Hi MIBaker, yes, you can certainly substitute our GF Measure for Measure flour 1:1 for the all-purpose flour called for in this recipe. Baking time may be a bit longer when substituting Measure for Measure, but check at the time recommended, and reset the timer from there, if necessary.

I'm glad you brought this recipe around again this Fall! The recipe printed in the September and October 2017 catalogs needs a correction. The 1/4 cup (7/8 ounce) of Organic Rolled Oats used in the topping should not weigh the same as the 1/2 cup portion in the batter. The weight is correct for 1/4 cup.
Thanks for pointing that out, Dianne. We apologize for the error and have checked to make sure the online version is correct. One of our greatest assets has always been having detail-oriented customers like yourself keeping us on our toes. We appreciate your keen eye. Kye@KAF
Just like Sara, I wondered too about making these in a large muffin pan, the Hamburger Bun Pan is the one I am talking about. Also, I can't eat nuts, would I just double the amount of oatmeal in the topping?
Oops, we're so sorry we missed Sara's question initially! The recipe will yield about 6-8 jumbo muffins, depending on the size of the pan that's used. The baking time will need to be extended by 5-10 minutes, and we recommend checking for doneness using a toothpick inserted into the muffins to ensure it comes out mostly clean. You can omit the pecans in the topping (don't double the oats or else it will be too dry), or consider using something else yummy and flavorful like our Cinnamon Sweet Bits instead. Happy baking! Kye@KAF
Do you have any tips on baking this in a jumbo muffin pan? Approximately how many muffins will the recipe yield?
Made these as soon as I found the recipe. Excellent.
Thanks Irene. It never occurred to me to replace the oats in the topping with more nuts. More pecans is never a bad thing. Will try the quick oats next time in the batter. The muffins were so good. My husband even liked them! I will say though, the cinnamon smell didn't fill my house as I had hoped! Maybe it was because I only made half a batch. Next time, I may make a whole batch and see if the cinnamon smell is more prominent. I do have another question! I noticed in the pictures, that the two half trays were filled in the middle. Does that help things to bake more evenly? Irene is a great resource, isn't she? Yes, baking muffins in the middle of the pan helps them bake more evenly, as they're closer to the center of the oven. If you're only making a half batch, it helps to use the middle of the pan. Cheers – PJH
Could the oats be omitted from the batter? The muffins were wonderful but caused some digestive problems! Not really into healthy baked goods around our house. Butter rules! The topping recipe calls for 1/4 cup rolled oats so you might consider 1/4 cup nuts, the muffin batter uses 1/2 C. oatmeal so using quick oats instead of the old fashioned may be kinder and gentler for you;) Happy Buttery Baking! Irene@KAF