Q. What do you call a savory bread pudding, made with sourdough bread, asparagus, ham, cheese, and eggs?

HA! You were going to say strata, weren't you? Well, you get an "A" for effort, as well as culinary cred; bread pudding made with savory ingredients rather than sweet is indeed strata.

And it is, indeed, remarkably delicious.

Strata (and its sweet sibling, bread pudding) are two dishes that have sadly fallen by the popular-food wayside.

Oh sure, you can get incredible bread pudding in New Orleans, complete with bourbon sauce (and probably on Bourbon Street, with all the entertainment that entails).

But in most restaurants? Maybe in New England, where it's often nose to tail on the menu with grapenut custard and homemade tapioca pudding.

And in your typical suburban joint, the type of place most of us go when we're tired of cooking and need a night out at a sensible price?

Which is a shame. Because bread pudding/strata is comfort food at its best: smooth, soft (with a complementary bit of chew), richly flavored yet mild (if that makes sense), and very easy to love.

Not only that - either is a great way to use up bread that's going stale. AND they're both super party dishes – bread pudding for a dinner party, strata for brunch. Assemble the night before, then bake just before serving; no fuss, no stress.

So, I challenge you: bookmark this recipe. And the next time you're having a crowd for breakfast (or your teenage son is home from college), serve Asparagus Strata with Sourdough.

Let's put this old favorite back on the culinary landscape.

Choose your asparagus; you'll need a medium bunch of fresh asparagus (about 15 to 20 average-size stalks), ends snapped off and cut into 1" pieces; or 9 ounces frozen asparagus.

I'm using fresh here. Cook the asparagus very briefly; a couple of minutes in the microwave should be sufficient. You want the stalks to be crisp, but not hard.

Turn the oven off; you won't be baking the strata until later. 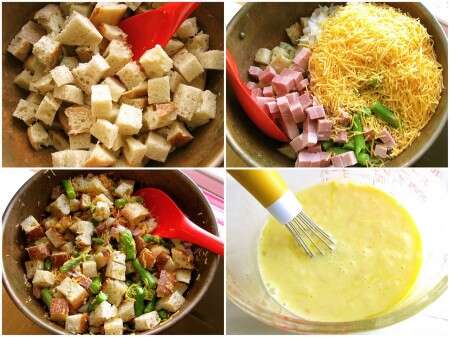 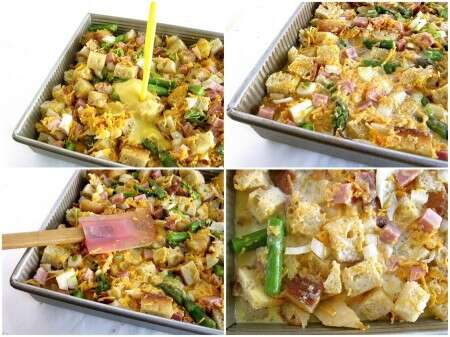 Spread the bread mixture in the prepared pan.

Pour the eggs/half & half over the bread mixture, pressing the bread gently into the liquid. Add up to an additional 1 cup (227g) half & half if the liquid doesn't come to within about 3/4" of the top of the bread cubes.

Why is there such a variation in the amount of half & half? Because a lot depends on the size and shape of your casserole dish. As noted, use enough so that the liquid comes to within 1/2" to 3/4" of the top of the bread.

Cover the pan, and refrigerate overnight, or for at least 6 hours.

Just before you're ready to bake, preheat the oven to 375°F. 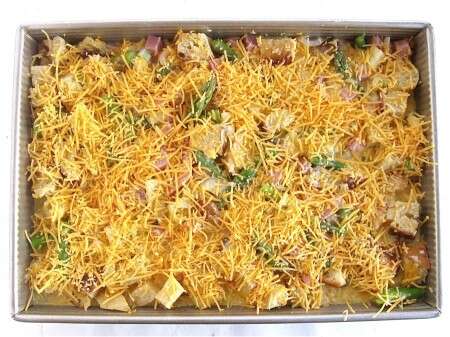 Sprinkle the top of the strata with 1/2 cup (57g) cheddar cheese. 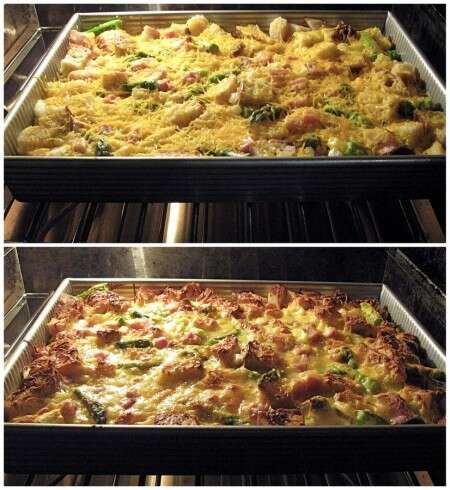 Bake the strata, uncovered, for about 45 minutes, or until it's puffed and golden. A knife blade inserted into the center will come out clean. 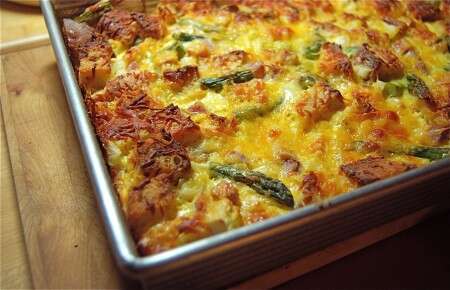 Remove the strata from the oven, and allow it to rest for 15 minutes before serving. 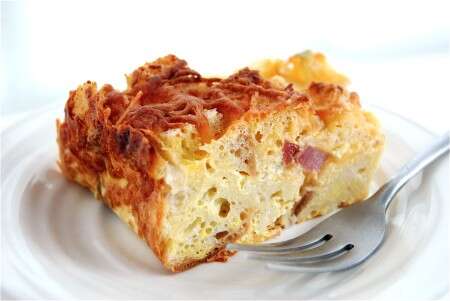 Read, bake, and review (please) our recipe for Asparagus Strata with Sourdough.

PJ, love this recipe! I made it for an old friend's visit and three adults finished this off in less than two days. A keeper! Thank you for the continued inspiration. Ever since I started my KAF addiction, I cannot seem to lose my last few extra pounds of baby weight. Had baby girl two in December! I do blame you- with a wink ;) Oooh, I have a December baby girl too, except mine is 17! (and I still have that baby weight *sigh*.) Glad you all enjoyed the strata. ~ MaryJane
PJ, I came up with the idea for a Spring Cookie Exchange because I have gotten so frustrated that everybody seems to be so BUSY during the holidays that no one wanted one more thing to do! I'm making linzer cookies, cutout sugar cookies shaped and decorated as flowers, and those darling Easter cookies made with the pop-out cutters you sell. By the way, those cutters are an excellent choice for decorating-challenged bakers, as the indentations serve as perfect guide lines for your frosting! Thanks again for the great strata recipe...can't wait to make it! Hey, good idea about using the linzer cutter as a stencil - IF I ever get inspired to decorate a cookie, I'd give that a try! :) PJH
Thanks, now I need to clean the drool off my keyboard. Welcome to our world! There's inspiration and temptation in the e-mails, catalogs, recipes, blogs and test kitchen - not to mention our store, cafe and bakery! Irene @ KAF
Thanks for the reminder--knew there was something I was forgetting in the fridge! Do I head to the store now for ham & bread for strata for supper tomorrow, or will it be asparagus fritatta tonight?
I made this for Easter and it turned out amazing. Mine cooked a little faster than the recipe stated so might want to keep a close on eye on it.
I have a similar recipe from a Junior League cookbook that I've made for the last 25 years. It has broccoli rather than asparagus. Always a hit, and easy to make. Love that it can be assembled the night before for a brunch. A real plus for someone (me!), who is not a morning person! I like that about strata, too - have it all ready the night before, and pop it in the oven. It's a really under-utilized breakfast, in my opinion - perfect for a crowd. PJH
This sounds WONDERFUL! I'm hosting a Spring Cookie Exchange in a couple of weeks, and now I know what main dish I will serve for brunch! I love the addition of asparagus to my tried-and-true ham strata recipe. Now, I just need to perk up my sourdough starter! Thanks again, KAF, for another great recipe. PJ, you're the best! Great idea, a spring cookie exchange - why wait for the holidays, right? :) Enjoy the strata - PJH
This wonderful strata was in the Baking Sheet, and I made it the day after Easter. It was amazing! Perfect in every way. My family says it's a keeper as a traditional day-after-Easter brunch! It was enjoyed by everyone! Perfect. And beautiful to look at! Thank you so much. Glad everyone liked it! Elisabeth

Everything you should bake this spring, from pastel cakes to floral bakes

Baking is about to get brighter.