Imagine the tart-sweet taste of homemade cranberry sauce, its tender/crisp berries bursting on your tongue.

Right about now, you're either thinking YES...

The idea for the following cranberry-topped pecan-fudge pie came from Joanna Waldman, a dedicated home baker, and member of the KAF “family.”

Joanna's husband, Jim Taylor, is our Web developer. Which means... well, he does something that involves long strings of incomprehensible letters and numbers on a computer screen, that somehow come together to make the pages on our Web site look good.

“Code,” it's called. More than that I don't know, and don't WANT to know – despite my Web teammates' attempts to educate me in this arcane skill set.

If HTML were English, that's where I'd be.

Anyway, Joanna is a gym buddy of mine. You know, the girlfriend you chat with while you're on the treadmill, so you don't die of boredom while trying to stave off a heart attack.

And what do we usually talk about, as we're huff-puffing away at 6 a.m.?

(Dare I admit it?) Rum balls. Upon which we heap scorn.

Not so pie. Joanna and I are both pie lovers extraordinaire. I'm totally into fruit pies. My current favorite is peach-apricot, though raspberry is a perennial front-runner. Cherry, apple, rhubarb, blueberry, bumbleberry... they put wings under my baking feet.

Joanna's more the chocolate type. She's also a free-thinker, unwed to conventions of any kind – in the best way.

Which is how she came up with the idea for this pie.

From there, it was an easy segue to chocolate-covered cranberries. And thence to Cranberry-Fudge Pie.

Which, so far as either of us knew, was as yet only a dream. Neither of us could find a recipe for what we envisioned: dark chocolate filling topped with cranberries.

So I started experimenting. First I opted for a graham cracker crust, both for simplicity's sake, and because the slight sweetness of the crackers helps temper the acidity of the cranberries and chocolate.

Next, I added some toasted pecans. Just because.

Then I sent a slice home with Jim, for Joanna.

Sure, it's one of those "A moment on the lips, forever on the hips" things; a dessert best made infrequently, and enjoyed in small slices.

But hey, that's what treadmills are for... 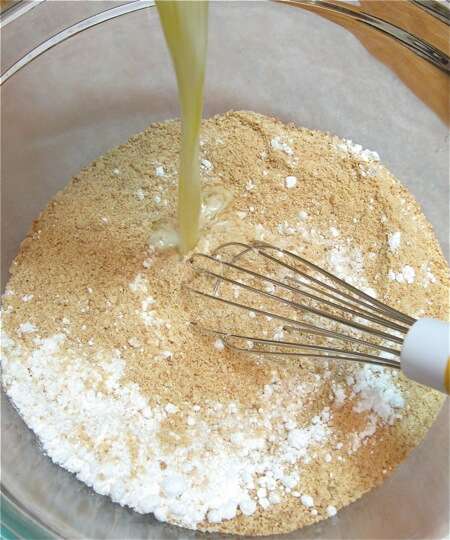 *One cellophane-wrapped packet of graham crackers (11 whole crackers) will yield this amount of crumbs. 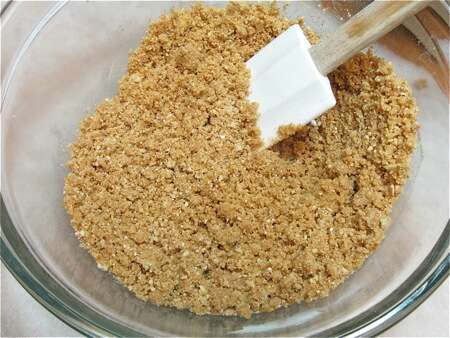 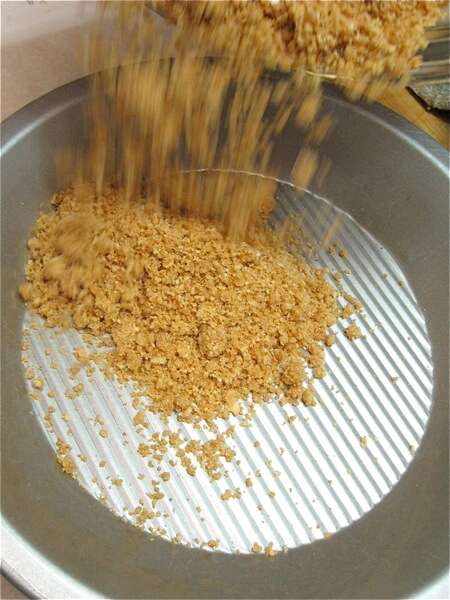 Pour the crumbs into a 9” pie pan. 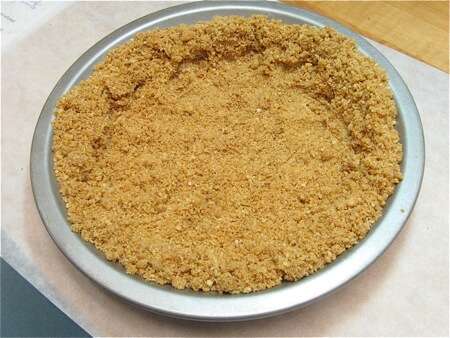 Press them into the bottom and up the sides of the pan.

Smooth the crumbs; the bottom of a dry measuring cup is a good tool to use for this task. 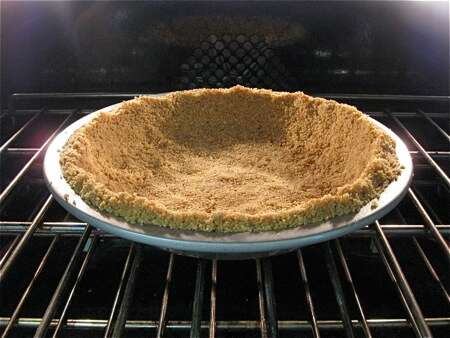 Bake the crust for about 7 to 8 minutes, until it’s set, but not brown. 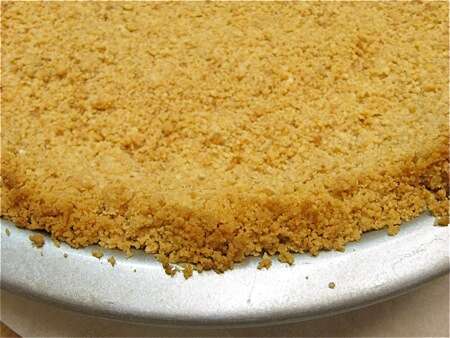 Remove it from the oven, and cool.

Why did we use confectioners' sugar or glazing sugar in this crust, instead of the more usual granulated? We find confectioners' gives a slightly softer, crumblier crust, perfect for a pie that's going to be refrigerated.

Next, cranberry sauce for the topping.

Bring the following to a boil: 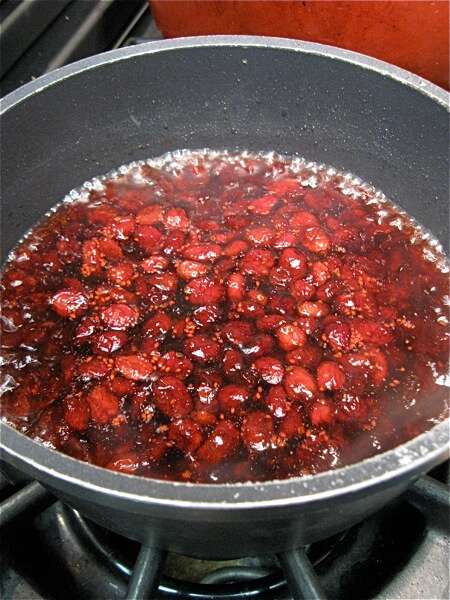 Stir in 1 cup dried cranberries. Simmer for about 5 minutes. 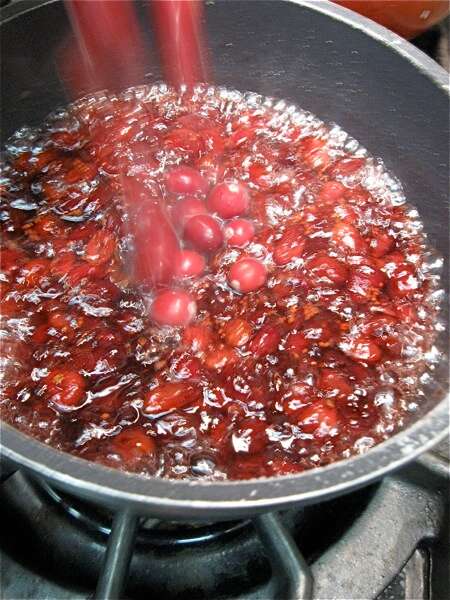 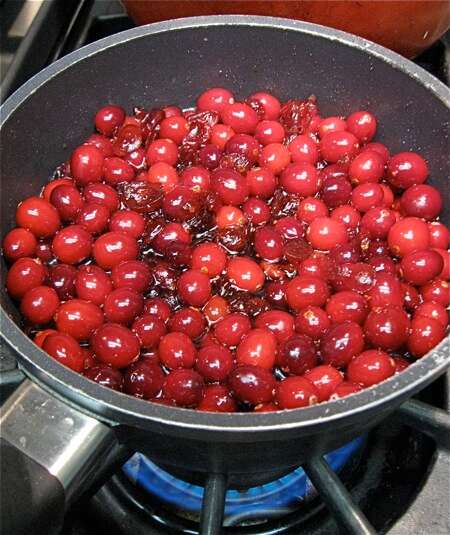 The fresh cranberries will float to the top; don't bother trying to push them down. 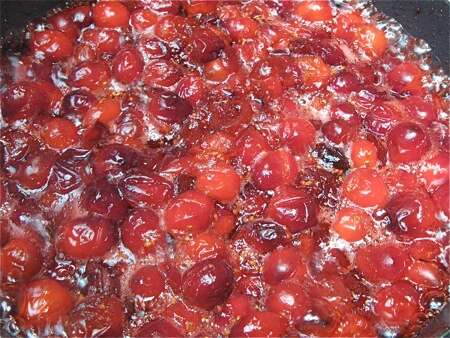 Simmer for another 5 minutes or so, stirring occasionally, until some of the berries have popped. 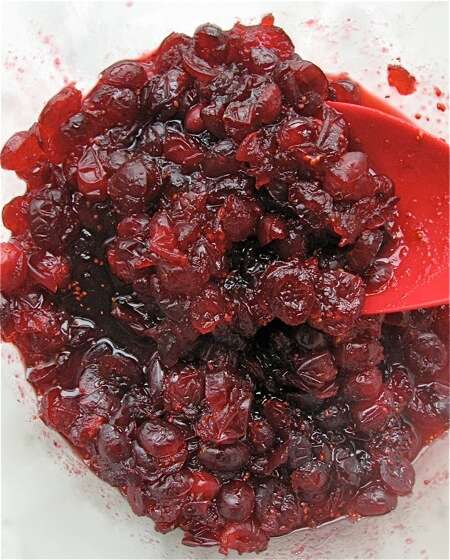 Remove from the heat, and cool to room temperature. The sauce will thicken as it cools. 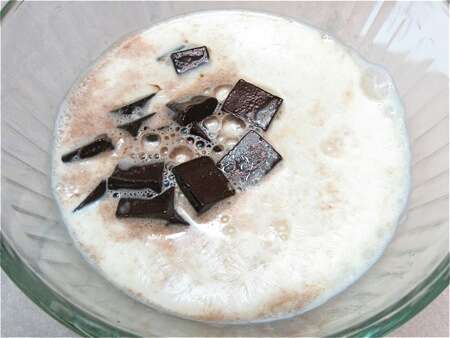 Resist the urge to use bittersweet chocolate; with the acidic tang of the cranberries, it’s just too much. You want a dark chocolate that’s noticeably sweet; most chocolate chips will be fine. 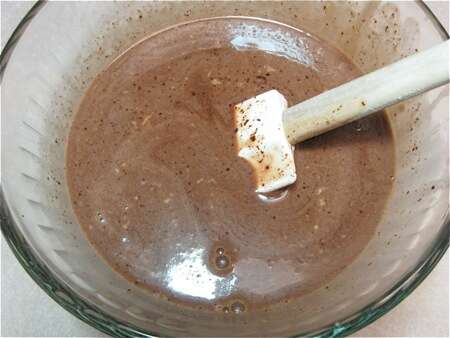 Heat for about 90 seconds. Remove from the heat, and stir until the mixture becomes smooth and dark brown. 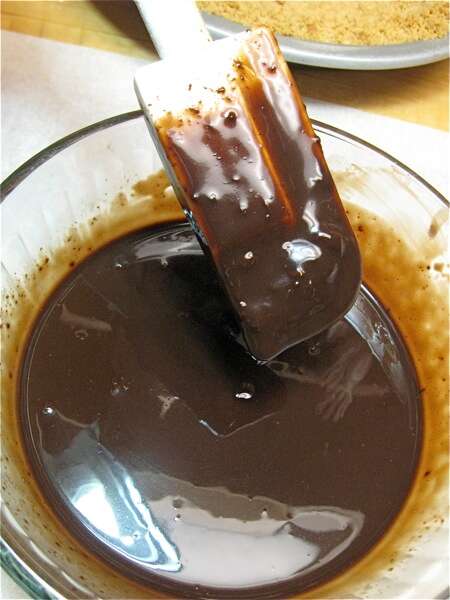 Pour the hot ganache into the cooled crust. 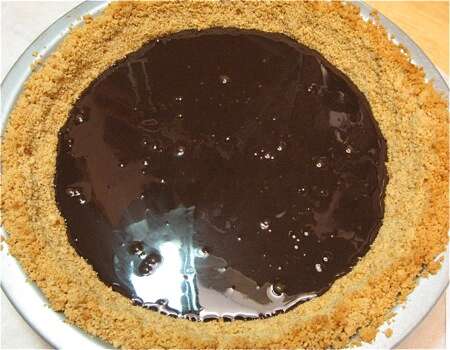 Tilt the pan so it spreads to cover the bottom.

Scatter on 3/4 cup diced walnuts or pecans. I like to first toast the nuts in a 350°F oven for 8 to 10 minutes; it brings out their flavor. 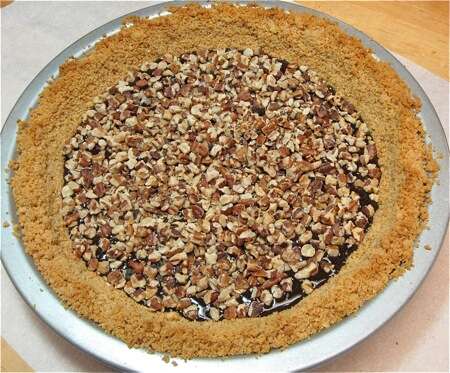 Cover the crust, and refrigerate it for at least 1 hour, probably 2, until the ganache has firmed up. 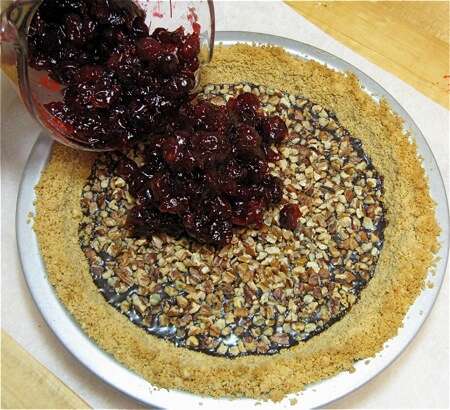 Next, the final touch: cranberries.

Spoon about 1 1/2 cups of the cranberry sauce atop the pie. You'll have some sauce left over; enjoy it on its own. 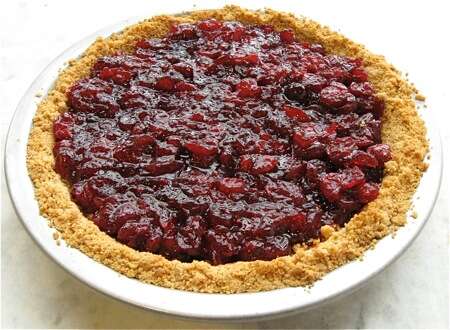 Press them down gently, to smooth the top. 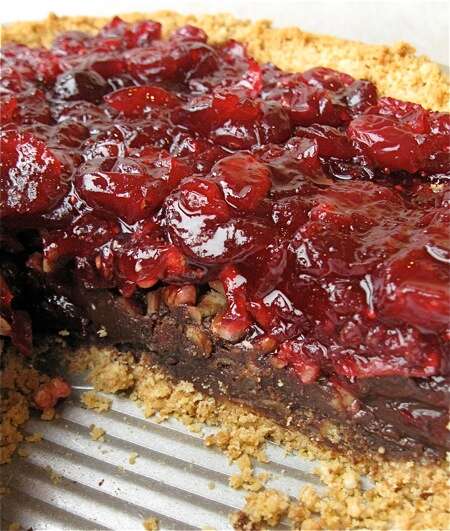 Serve immediately, or refrigerate until ready to serve. 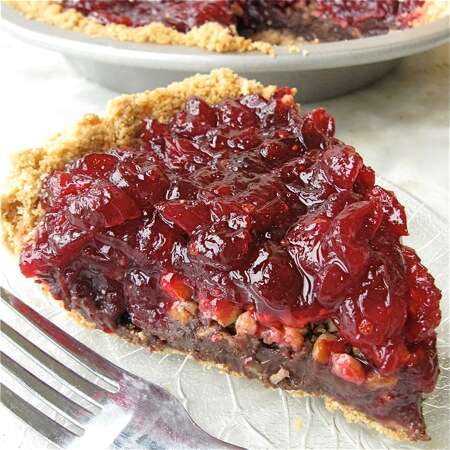 As I said, you have to be a fan of the cranberry/dark chocolate flavor combo to appreciate this unusual pie. But assuming you are – this is sheer perfection.

Read, rate, and review (please) our recipe for Cranberry-Fudge Pie.

This one looks a little too rich for me. (Wait, did those words just come out of my mouth?) The whole bottom being pure chocolate ganache just seems like it would be waaay too much chocolate. I suppose it just calls for smaller slices, perhaps? You've got it, Lina - very small slices, and a cup of coffee. I thought it would be over-the-top rich, too; but the thick layer of cranberries and the crumb crust help temper it. It's a nice pie... PJH
This looks incredibly delicious! I was planning to make a cranberry upside down cake tomorrow, but this looks much more decadent. You are a genius for finding the perfect combination of cranberries and chocolate (and the pecans are an added bonus)! I'm salivating over the pictures right now. Bravo! Salivating? Step away from the computer, Maureen... :) PJH
How unusual that no one has posted a comment about this unique pie yet. I love chocolate covered fruit and this pie looks and sounds delicious! You were actually the first to comment - I'm approving these in reverse order at the moment... Enjoy! PJH
i LOVE this idea! i don't mostly go in for the traditional pumpkin or pecan pies (unless it's a chocolate pecan pie, or even better, chocolate mixed nut pie). Instead, my traditional Thanksgiving pie is a lemon creme. i think this year, we'll have cranberry fudge as well! Thanks for the brilliant idea, Joanna and PJ! Come join us at the gym, we'll think of the Next Great Pie together! PJH