What is it about sticky buns that just seems so perfectly in tune with this time of the year?

Is it the over-the-top sweetness, the kind of sugary overkill we used to enjoy as kids, sucking on lollipops and rock candy? Or maybe it’s the active way you eat these buns, grasping them gingerly to avoid the sticky parts, but inevitably ending up with fingers to lick clean…

Perhaps it’s just that they taste so darned good with a cup of hot coffee, nibbled in the car as you patiently wait for the heater to clear a 6” circle in the ice on the windshield so you can get on the road. Heck, even if you’re in Florida (a state of bliss from which I just returned), cool mornings call for warm sticky buns.

Sticky buns and cinnamon rolls—or sticky rolls and cinnamon buns—are all sisters under the skin. A basic cinnamon roll recipe (butter-rich dough rolled around cinnamon filling, sliced and baked) becomes a cinnamon roll with the addition of white icing. Or a sticky bun by baking the rolls in a simmering bath of sugar and butter laced with pecans or walnuts. Or a Persian Bun by flattening the rolls into ovals before baking, then icing with a white (or, traditionally, raspberry) glaze. Note: For all you Persian Bun fans out there, we’ll do a complete examination of this elusive sweet roll in a future blog.

While sticky buns include a number of steps, none of them are difficult. If you’re a beginning yeast baker, you might want to get your feet wet with our No-Knead 100% Whole Wheat Bread. But once you’ve used yeast a few times (instant yeast is your best and easiest choice), making Sticky Buns is simply a matter of following a series of simple steps. Take a look: 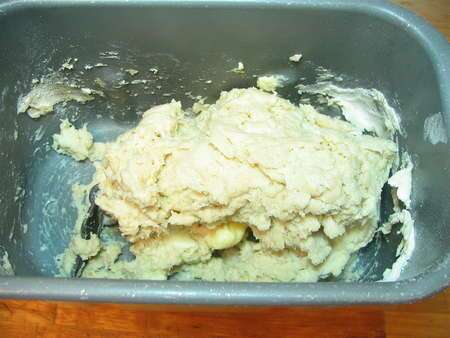 Mix together all of the dough ingredients. The bread machine does a great job; use a stand mixer, a hand mixer, or your hands, if you prefer. 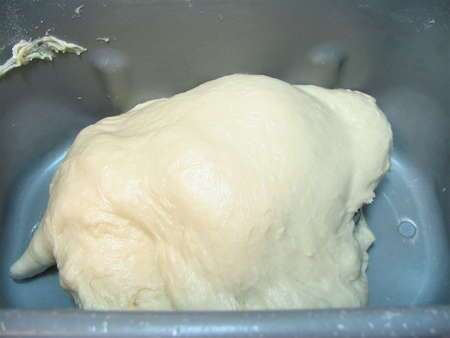 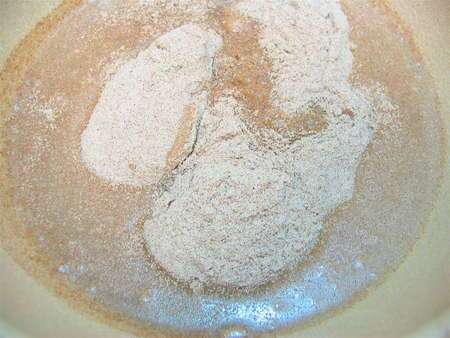 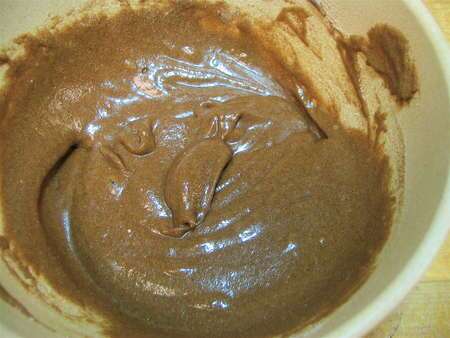 ...and stir to make a smooth, soft paste. (If you're substituting sugar and cinnamon for the Baker's Cinnamon Filling, skip the water.) 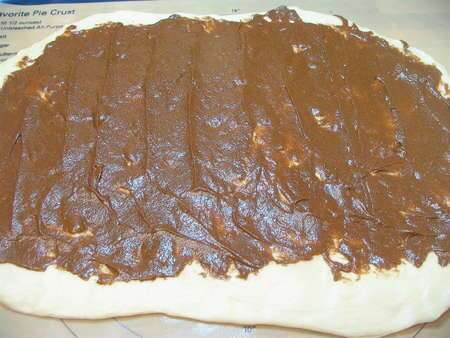 Roll the dough into a rectangle, and spread with the cinnamon filling, leaving one long edge uncovered. 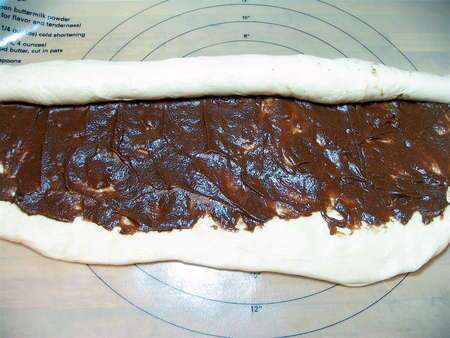 Roll up the dough the long way. Here's why you didn't cover that long edge with filling: because as you roll, the filling is pushed towards the edge. The “naked” edge allows the filling to spread, and also helps you seal the roll closed. 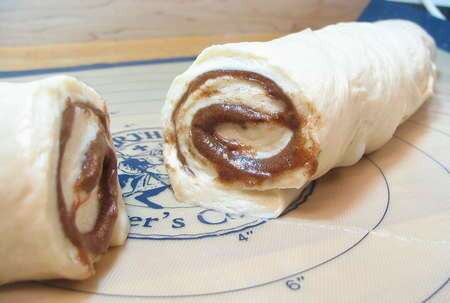 Cut the dough in slices. Gentle sawing with a serrated knife prevents squishing and keeps the filling where it belongs. If you're working on a silicone mat, watch out when you get to the bottom of the log; you don't want to cut the silicone. As I did here; note the saw mark on the silicone from an earlier (careless) bun-cutting episode. 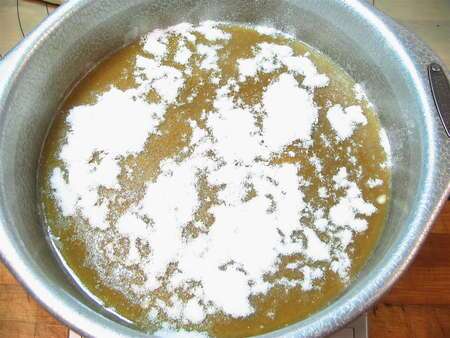 Combine the glaze ingredients, and divide it between two greased 9” round cake pans. Sprinkle with the sticky bun sugar, if you're using it. Sticky bun sugar, a “secret ingredient” of professional bakers, gives the buns over-the-top stickiness. 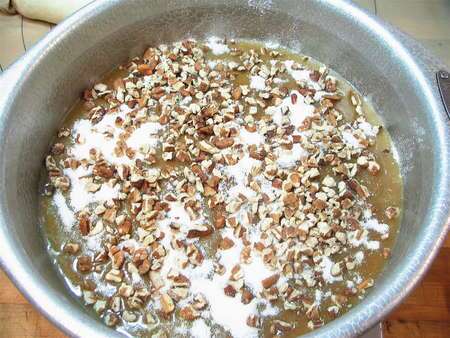 Scatter the pecans on top. 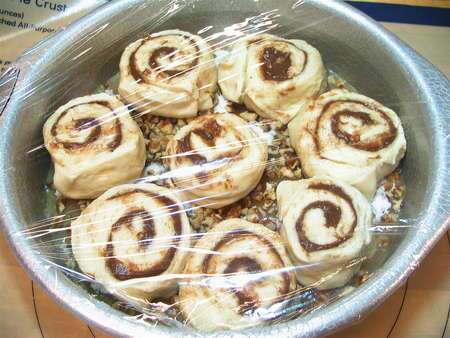 Space the buns in the pans evenly, and cover with plastic wrap. 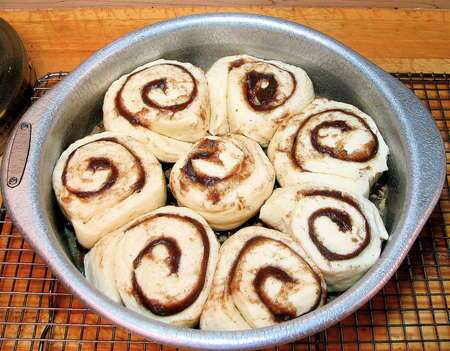 Let the buns rise for 60 to 90 minutes; they'll spread out and touch one another. 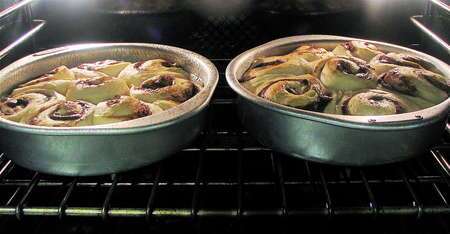 Bake till golden brown. You'll probably want to tent them loosely with foil after the first 15 minutes, to prevent over-browning. 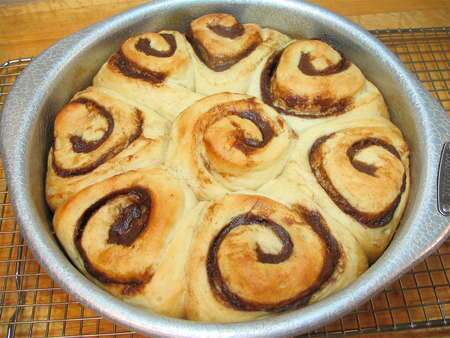 Lovely! But don't stand there admiring them too long, you need to work fast. 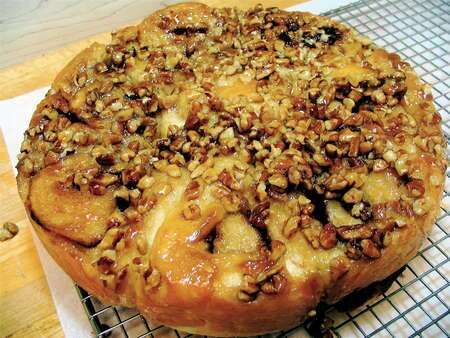 Turn the buns out of the pan onto a rack set over parchment, to catch any sticky drips. 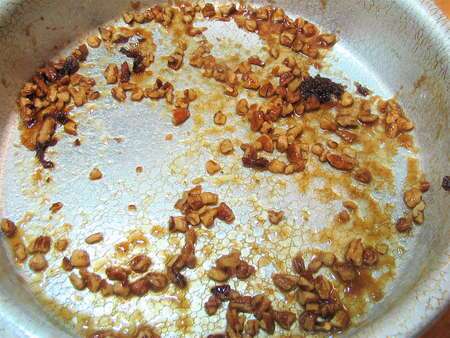 You'll no doubt find some of the topping has stuck to the pan. Just scrape it off and spread it on the warm buns. 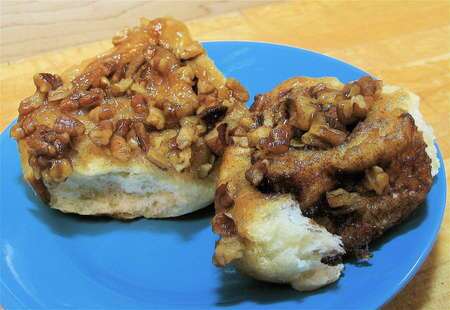 Pull apart and serve. Warm is best, but they're pretty darned tasty at room temperature, too. Pour a cup of coffee... ahhhh!

How do l make a homemade stickey bun topping and filling?
Hi Kay! This recipe offers great suggestions on homemade sticky bun topping and filling that we used for this blog article. Happy baking! Annabelle@KAF
Use heavy thread or unflavored dental floss to cut your rolls instead of a knife. Using about a 12" long piece, slide under the rolled up dough. Bring ends up and cross over each other and pull. Will cut perfectly without ruining a mat and without crushing the rolled up dough.

I'm a novice baker so am wondering in the first kneading step, how long should I knead the dough for? I use an KitchenAid mixer - should I use the dough hook? The first time I made this it was perfect, the second time the dough never took enough form to roll out and the third was somewhere in between. I do have a bread machine but what setting do you use? Is there just a knead setting? Yes, you may use the dough hook on your Kitchen Aid and knead for approximately 7-8 minutes. My favorite way to knead when in the test kitchen is to use the bread machine. It does a super job! Use the Dough setting. Enjoy! Elisabeth

I had Pershing Rolls as a kid growing up in Savannah, Georgia; they were delicious. A flat yeast cinnamon bun, tho the cinnamon was very light, rolled in thin layers, deep fried, then glazed; the thin layers caused some crispness to the dough and pockets of glaze pooled in the recesses making an amazing sugary crust...hope somebody comes up with the recipe! These never had a fruit icing. Persian Buns (a.k.a. Pershing) are definitely on my "to do" list, Lynn - one of these days I'll actually get around to them! PJH
> When I used to enjoy them at the Camden Home Bakery in > Camden, Maine (yes, they’d traveled beyond Canada), they > were a large, flattish, moist, iced cinnamon bun. I do believe > they were deep-fried, too; the bun part was rather like a yeast- > raised doughnut. As it turns out, I'm the step-grandson of one of the Camden Home Bakery owners. According to the Bangor Daily News, another local bakery (in Belfast) has apparently successfully reproduced the Persian bun: http://bangordailynews.com/2011/06/28/living/21st%C2%A0century-remix-for-favorite-camden-treat-%E2%80%94-persian-buns/ (note, the URL is not clickable, and needs to be reassembled) From the article: > The buns are now available both at the Belfast bakery and at > French & Brawn Marketplace in Camden, which gets a > delivery from Weaver’s a couple of times a week. I’ve always meant to make them, just haven’t yet. Maybe you’ve finally given me the impetus to figure them out once and for all! Lurker, I was up in Camden a couple of months ago and actually did get a Persian Bun at French & Brawn's! For research purposes, of course. They don't match the other written info. I've seen about them - namely, the deep frying, and raspberry icing - but oh, my, they're tasty: classic yeast cinnamon bun with thick chocolate icing. I took a picture before it disappeared - for a future blog, hopefully. If you ever get any "family insight" into the recipe, I'd love to hear it! Trust me, those Persian Buns provided the Camden Herald crew with regular sustenance for years... :) PJH
Hi PJ, Wondering if you ever gave these a shot? My parents grew up in Thunder Bay and I've been trying to find a recipe so that I can try making some for them - much easier than trying to smuggle them home in my suitcase and carry-on!! Please let me know!
Has anyone ever figured out a recipe for Persian Buns or Pershing Rolls; the deep fried kind with the glaze on them? I'll add this to the list of customer observations to consider developing our own recipe. In the meantime, try this website for your recipe search, www.hungrybrowser.com. Irene @ KAF It's on my list, Trudy - I researched their history, know exactly what they are, simply haven't gotten around to trying them yet. Give it a try, if you like - they're deep-fried cinnamon buns drizzled with raspberry icing.... PJH
We call these caramel rolls and no one knows what I'm talking about! SO yummy and decadent!
I'd like to second the request for a recipe that replicates the Persian! My husband and I were in Thunder Bay, and we ended up visiting The Persian Man bakery twice to buy these delicious cinnamon buns. And we were never able to agree if the frosting flavor is raspberry or strawberry - the flavor isn't very strong, but if I had to, I'd guess strawberry. Traditionally, Amy, it's raspberry. And it's on my list of projects for this winter, so hopefully I'll figure it out before too long! PJH