Pienanny founder Tiffany-Anne Parkes spent her whole life dismissing Jamaican Sweet Potato Pudding, a beloved classic dessert. Then one day her entire relationship with the dish changed, leading her to finally create a recipe that she loves.

I have a confession: The first time I tried Jamaican Sweet Potato Pudding, I hated it.

Mind you, this is a very risky statement coming from a first-generation American-born Jamaican. Sweet potato pudding is arguably the most beloved sweet treat not just of Jamaicans, but the entire non-Spanish speaking Caribbean. Much like coquito, rum cream, or crémas, each island has its own version of the irresistible dish. And if you speak ill of it, you risk having your Jamaican Black card revoked.

As an adolescent, though, I couldn’t help but loathe the Jamaican classic. For a long time, I chalked it up to my age and undeveloped palate. But no, that wasn’t it — according to my mother I was the pickiest of eaters, with very distinguished taste from a young age. Ultimately, there was just something about this chewy, rubbery, sometimes grainy, downright hard-to-swallow chunk of a dessert that did not sit right with me or my stomach, no matter how much it was lauded by my family, neighborhood friends, and South Floridian Jamaican community. Each time, I would “cut my eyes” and scrunch up my face at anyone who dared offer it to me.

The centerpiece of holiday celebrations

Within a typical Jamaican-American holiday spread, you will undoubtedly find a turkey, but it will likely be marinated and jerked to perfection. Sights of other proteins, such as honey-baked ham, will be taken in, but not without the presence of huge pots of jerk pork and curry goat too. The not-so-typical sides range from cranberry sauce (both canned and fresh) and Southern “dressing” to callaloo, festival (Jamaican sweet fried dough), and the essential rice and peas. Desserts are usually dominated by American classics like key lime, apple, and pecan pies, but one thing is for sure: sweet potato pudding is always a part of that spread. I’d argue that most Caribbean people choose it over sweet potato pie.

In the United States, sweet potatoes are the crown jewel of holiday sides and desserts, and the same could be said for Jamaica. But I’m not talking about the well-known orange-fleshed potato used to make sweet potato pie or candied yams here in the States. (News flash: Those aren’t really yams or “nyami” at all! They’re just sweet potatoes.) No, I’m speaking of the Japanese sweet potato and the Caribbean sweet potato often labeled as “Dominican Batata” in New York City bodegas and small chain supermarkets. The starchiness and high sugar content of Caribbean and Japanese sweet potatoes make them perfect for a solid yet moist sweet potato dish to serve at holidays such as Christmas and Easter.

But sweet potato pudding is not just relegated to holidays: It’s offered at kickbacks, as a dessert at sit-down dinners, and at funerals to bring comfort to those mourning. In fact, it was during my own mother’s funeral processions, when I opened my cousin’s front door to a family friend standing with a huge tray of snack-sized sweet potato pudding squares, that everything changed for me and sweet potato pudding. At the first reluctant bite, my disdain turned to appreciation. Unlike the loathsome pudding of gatherings past, this familiar but superior snack was incredibly moist, balanced, and each small piece satisfied me more than its blubbery predecessors ever did.

For me, successful baking relies heavily on the memory of my taste buds and the emotions I feel the moment I see, smell, and touch food. In my baking practice, I am religiously recalling the flavor profiles that were so familiar to me in my childhood and adolescent years in order to develop recipes that are true to Jamaican tradition but reflective of my access to a wider variety of ingredients as an American.

So this pleasant surprise at such a life-changing moment was a necessary and welcome blueprint for me to (finally) develop my own treasured recipe.

When I tasted (over and over again) this newfound version of the critically acclaimed sweet treat, I quickly came to the conclusion that flour can make or break a sweet potato pudding recipe. Too much of it and you end up with a rubbery stomach stopper like I described above. Too little coupled with the wrong starches, and you end up with mush. Add cornmeal and you spoil what is supposed to be a smooth indulgent texture that almost melts on your tongue. To achieve the right texture, I tested endlessly before landing on the proper amount of flour in my recipe.

Once I had the texture, next came the taste. I practice balance in my baking, which for me does not mean sacrificing depth of flavor for sweetness. Many of the iterations of sweet potato pudding I had previously tasted fell flat on my tongue and lacked body. To cure these ills, I incorporated an old-time favorite sweetener, blackstrap molasses, and a new favorite, coconut sugar. I also opted for coconut cream instead of coconut milk to amp up the moisture retention, and I used the traditional method of lining a Dutch pot with banana leaf to bake.

Perhaps it’s the American in me who loves decadence and richness in a dessert, and this recipe indulges me in all the ways I like. My hope is that — for you — this Sweet Potato Pudding recipe lives up to the hype. 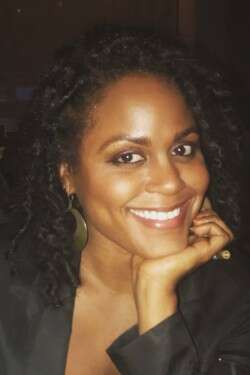 Tiffany-Anne Parkes is a multi-hyphenate creative and owner of Pienanny and A Seat Above The Table. In her culinary and educational practices, Tiffany uses pastry and visual art to interrogate issues of race, gender, class, and culture.

View all by Tiffany-Anne Parkes

Thank you for sharing your story and your recipe. This sounds delicious and kind-of reminds me of of my grandmother's southern Sweet Potato Pudding (which uses grated sweet potatoes, instead), but with a twist. My future "bonus" daughter, Denise, is half Jamaican and I'd love to make this recipe with her to keep her connected to her biological mother's heritage. (Unlike what has been done to me she will always be connected to, and have a relationship with, her biological mother and her side of her family.) Even though I am an experienced cook and baker, I am new to preparing Jamaican cuisine, so learning about it will be an adventure. Once again, thanks for sharing your recipe.

Thank you so much for sharing a part of your story Darlita. We delight in hearing about the ways in which baking can bind a family together (both biological and chosen) and hope that you enjoy the journey!

Thank you, Maggie, for the kind words and well wishes. I really appreciate them. I've always wanted a family to nurture, spoil, and share my love of cooking and baking with so I'm looking forward to creating new memories. There's absolutely no doubt that I will enjoy the journey to not only learn a new cuisine but to raise his, mine, and our (hopefully...if it's not too late for us to have a biological child together) children grow up into healthy, happy adults.

Hello, I never heard of this particular dish. I enjoyed your story. Do you cook the sweet potatoes before putting them in the food processor?

Hi Mary, check out the  Jamaican Sweet Potato Pudding recipe page for more specific guidance on how to make this recipe. In this case, the sweet potatoes aren't cooked before they go in the food processor.

Ms. Tiffany....You have earned back your Jamaican Black Card with this recipe.
I too am a first generation born here in the states of my mother. I readily enjoyed the sweet potato/yam of the south from my father's side of the family, but not the way it was prepared by my mother's origins.
This recipe is a keeper.

The texture looks amazing omg can't wait to bake this! Didn't grow up eating this pudding but loved to hear of its origin and will love getting to know a piece of Jamaican culture with it :D

Wow! Exactly what i've been doing. I've been experimenting with this one for years. Mainly to find sweeteners that weren't as bad a regular sugar. I actually just made one using stevia, but the taste wasn't that good. Thanks Tiffany! I'll definitely give this a try.

This looks amazing! I loved reading about the process of creating it, and will add this to my New Year's menu next week!