Believe it or not, there are people in this world who prefer vanilla to chocolate.

I'm not one of them; but I have to admit, I sometimes waver. Especially when confronted with a dish of homemade Vanilla Ice Cream, flecked with tiny vanilla-bean seeds; or Golden Vanilla Pound Cake, with its tantalizing butter-vanilla aroma, and crunchy vanilla-sugar topping.

That said, vanilla can be a hard flavor to capture. It's ephemeral; elusive; haunting... Unlike chocolate, which is right in your face, vanilla dances around the edge of other flavors, enhancing but not asserting itself; you know that the cookie, piece of cake, or scone you're enjoying tastes good, but you can't lay your finger on just why.

I decided it was high time vanilla took center stage – in cookies.

Sounds pretty simple. But, as so often happens with the simplest recipes, it was more complex than I'd imagined.

My first recipes were totally, unrelentingly sweet; without any contrasting flavors (chocolate, nuts, fruit), the vanilla simply got lost in the sugar.

I cut back on the sugar; but that affected the cookies' texture. I tried adding a hint of vanilla-butternut flavor; but it fought with the regular vanilla; and when I lowered the amount, I couldn't detect it.

Surprise! That 48-hour rest had added a subtle nuance to the cookies' flavor. Was it a hint of caramelization? A tiny bit of dough fermentation? Whatever it was, it was tasty. So I decided to incorporate it into the recipe directions:

"The recipe calls for the dough to chill for 2 days in the refrigerator; this enhances the cookies' flavor, which can be one-dimensionally sweet without it. You can certainly make them without chilling first, but we highly recommend it."

Further tests showed that a 48-hour chill was optimal; at 24 hours, the cookies' flavor wasn't quite as good; at 72 hours, the texture again started to suffer. Granted, the differences are minimal. If you're in a hurry, bake the cookies right away; if you don't get around to the dough until 3 or 4 days later, go ahead and bake the cookies, they'll still be tasty.

But do give the suggested 2-day rest a try; shy vanilla deserves this special treatment.

One final note: you'll notice this recipe is made with bread flour. Many of you have asked what you can do with bread flour besides make bread, and here's one of the sweet possibilities. But if you want to make this recipe with all-purpose flour, go right ahead; no adjustments are necessary. 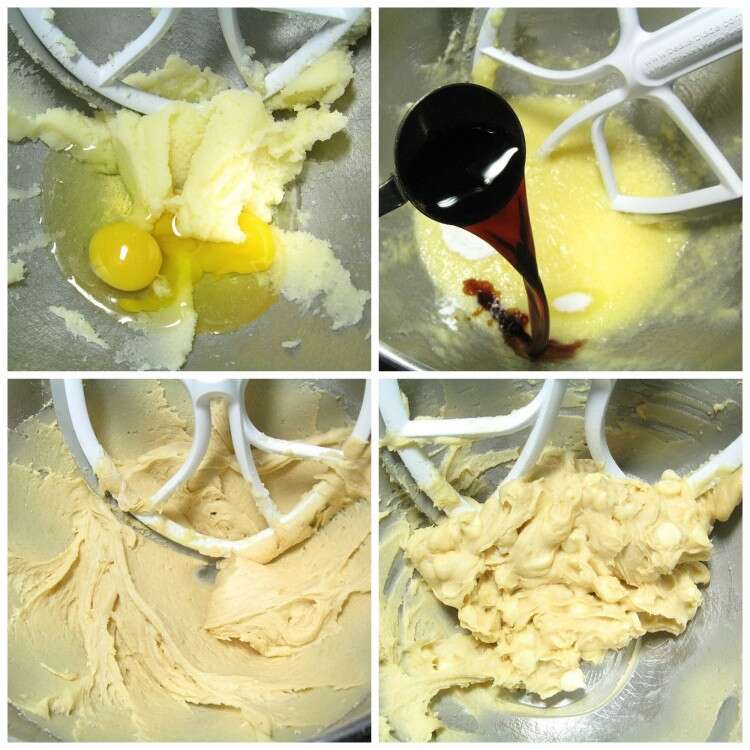 Beat in the following:

Transfer the dough to a covered container, and refrigerate it for 48 hours. 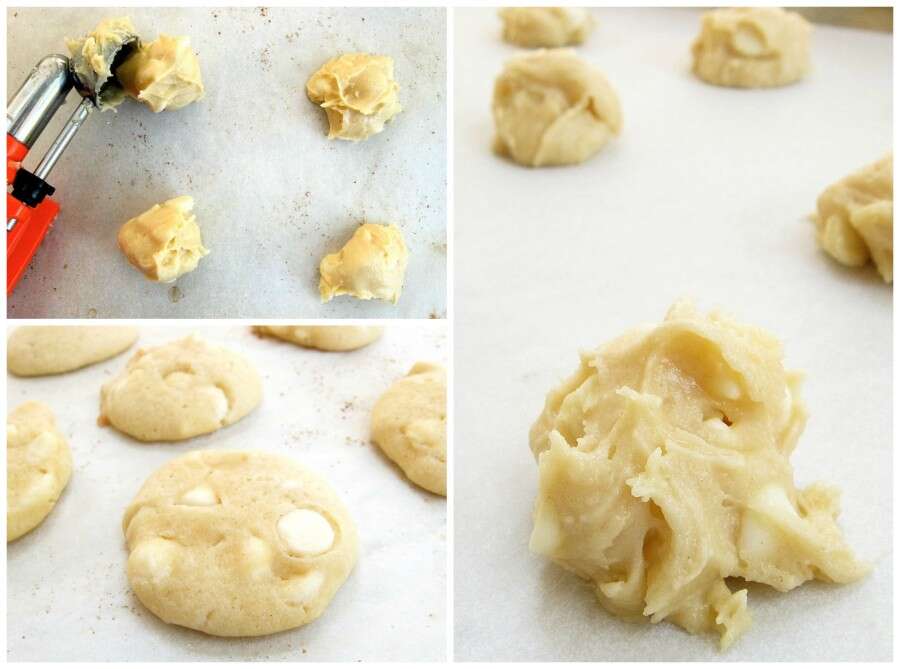 Bake the cookies for 8 to 9 minutes; they might be barely starting to brown on the bottom or around the edges, but don't over-bake; you want them to remain soft.

Remove the cookies from the oven, and cool them right on the pan.

Hint: If you're into appearance, these cookies are quite plain-looking. To give them visual panache, poke a few additional white chips into each of the cookies as soon as they come out of the oven. 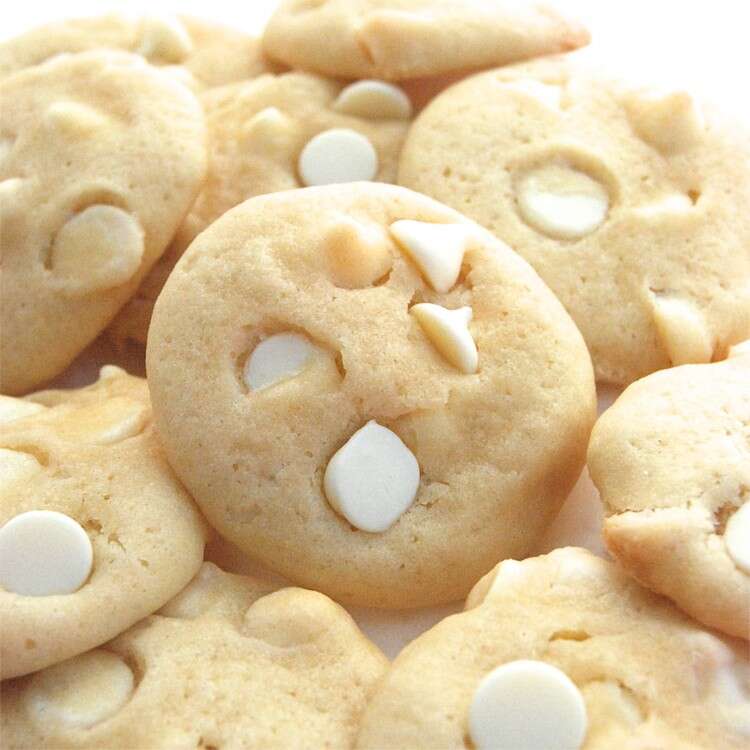 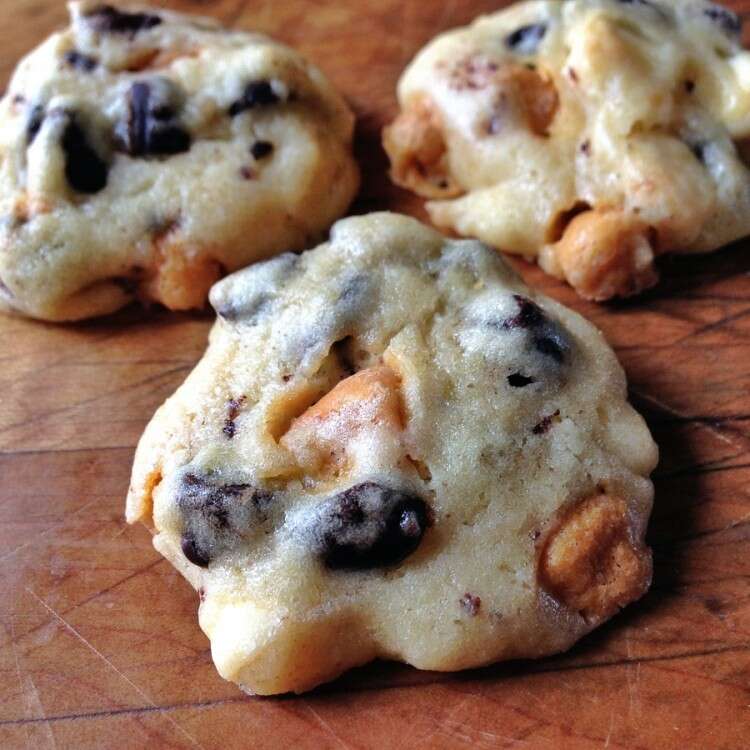 I ran out of white chips in one of the test batches, and substituted a mixture of white, butterscotch, and semisweet chocolate. While not "pure vanilla," obviously, they were very tasty indeed!

These are great tasting cookies! My wife and friends love them.

Would the texture be OK if I added almond flour? If so, how much would you recommend?
Ann, you should be able to substitute up to 1/4 of the flour amount with almond flour. We haven't tried this with this recipe, so let us know how they turn out! Barb@KAF
White chocolate chips - NO - try these....decidedly MORE VANILLA FLAVORED than chocolate. Would seem to be the perfect ingredient for this recipe!!!! https://www.guittard.com/our-chocolate/detail/choc-au-lait-baking-chips
I made the cookies yesterday without taking the time to chill them first. The dough came out very soft and sticky and refused to ball, so I dropped it into a lined mini muffin pan. I also added a couple of teaspoons of instant coffee. Nine minutes weren't enough so I added another minute. And after all these changes, I got 3-dozen fantastic cookies-slash-muffins. I guess the dough would have been more managable after its stay in the fridge, right?
Dana, sounds like you created a great new cookie (muffin?)! So glad they worked out for you, albeit in a different form. Yes, a stay in the fridge stiffens up the dough; although even without being in the fridge, it shouldn't be batter-like. If you used a flour other than King Arthur Unbleached All-Purpose, you might have gotten this "thin" result, as other national brands are lower-protein and produce thinner doughs, using our recipes. Anyway - glad you liked them. Thanks for sharing - PJH
I am going to make these with cinnamon chips (like choc chips - not the hard ones) I'll get back to you on Sunday when I bake them. As of now the dough is yummy....NS
Mmm that should be a good combination, enjoy! Jon@KAF
Can regular unbleached flour be used instead of bread flour?
Sure, Sandra - read the "baker's tip" at the end of the recipe ingredients. No adjustments needed. Enjoy - PJH