From store-bought to homemade

Who among us, upon walking into a bakery, up and down the aisles at the supermarket, or past the stands at a farmers' market hasn't looked at [bread, pie, cake, muffins, cookies...] and said, "Hey, I could do that."

There's one particular place this happens to me a lot. And, I surmise, lots of other people, too.

You know Panera, right? While their service is speedy enough to qualify Panera as fast food, their breads, pastries, salads, soups, and desserts are a huge cut above the food at other fast-food chains.

Their breads and pastries are especially good, and it's no wonder – Panera's head baker, Tom Gumpel, is the former associate dean of baking and pastry arts at the CIA: the Culinary Institute of America, the country's foremost culinary school.

He was also the captain of Team USA at Paris' 1999 Coupe du Monde de la Boulangerie – the "bread-baking Olympics" – leading the American team to its first victory ever.

A Certified Master Baker, Tom was named one of America's “Top Ten Bread Bakers” by Dessert Professional magazine, back in 2010. So clearly, Panera's breads (three cheese, sesame semolina, sourdough, cinnamon raisin...), to say nothing of their bagels, pecan rolls, and other yeast-based treats, bear the touch of a master.

Sadly, there's not a Panera Bread close to where I live. But happily, I'm gradually creating my own clones of some of their most popular offerings – like their Asiago bagels. 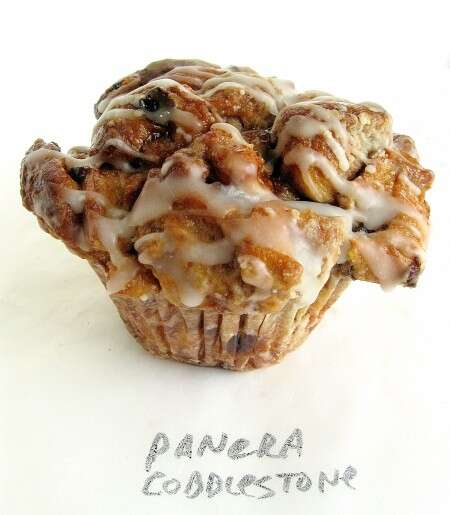 And their signature Cobblestone, a streusel-topped, icing-glazed... well,  here's the description from their menu:

"Cobblestone: Our Cinnamon Raisin bread dough mixed with chunks of apples and spices, topped with streusel and white icing." 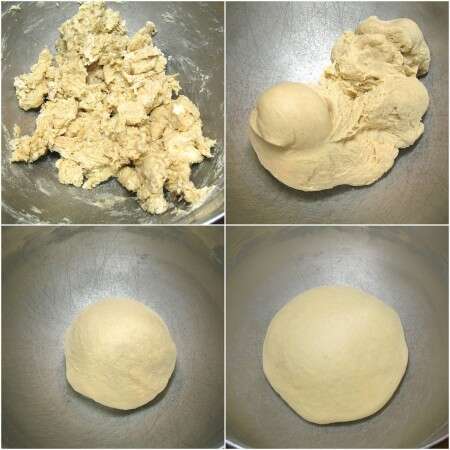 **Why baking soda – isn't this a yeast bread? While it's not critical, we feel it gives the rolls a bit of extra "pop" in the oven.

Mix and then knead to make a smooth, soft dough. It may seem dry at first, but as you knead it'll soften up.

Place the dough in a greased bowl or greased 8-cup measure, cover it, and let it rise for 60 to 90 minutes, until it's noticeably puffy (though not necessarily doubled in bulk).

Lightly grease paper muffin cups, and use them to line the 12 cups of a standard muffin tin. The recipe makes 16 rolls; but if you don't have a second pan, don't stress — we'll give you an alternative. Gently deflate the dough, and divide it into 16 pieces; each will be about 1 1/2 ounces (44g). Round each piece into a flattened ball.

Working with one piece at a time, use a bench knife (or regular knife) to cut the dough into 8 wedges. Don't worry about being precise; pieces can vary in size. Roll or shake the dough pieces in cinnamon-sugar. 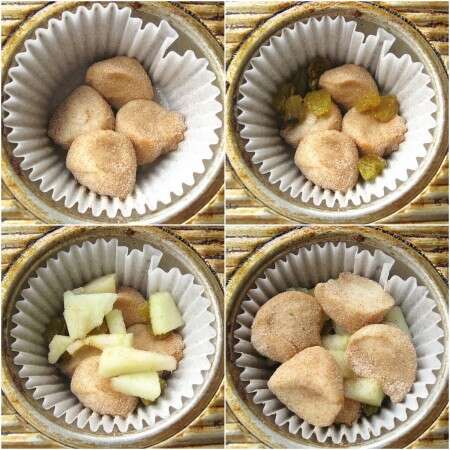 Variation: Add a sprinkle of cinnamon chips, along with the raisins and apple. While Panera doesn't mention cinnamon chips in their Cobblestone description, they're listed in the ingredient statement.

Now, if you demand precision in a recipe, this part is probably a challenge for you. How many raisins, exactly, do you use for each roll? How many pieces of apple?

While baking often does demand exact amounts of ingredients, the filling for these rolls is more intuitive. If it looks good to you, it's right. I ended up using about 1/2 cup of raisins and a heaping cup of chopped fresh apple, total.

"Did you peel the apple?" Yes, I did; but it's really not necessary.

Repeat with the remaining balls of dough, raisins, and apple.

When you run out of room in the muffin tin, section the remaining four dough balls, and make them into a small pull-apart bread. Or make individual rolls by placing them in doubled-up aluminum foil muffin cups, set in a cake pan or on small baking sheet. 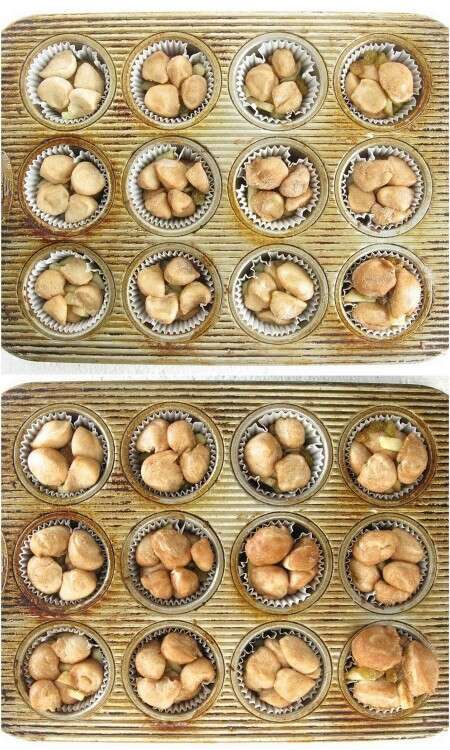 Sprinkle any remaining cinnamon-sugar atop the rolls. Cover them lightly, and let them rise for about 2 hours, until they're puffy.

As you can see from the bottom photo, these aren't real high-risers. Which is just fine, as the unrisen dough fills the muffin cups quite full to begin with. 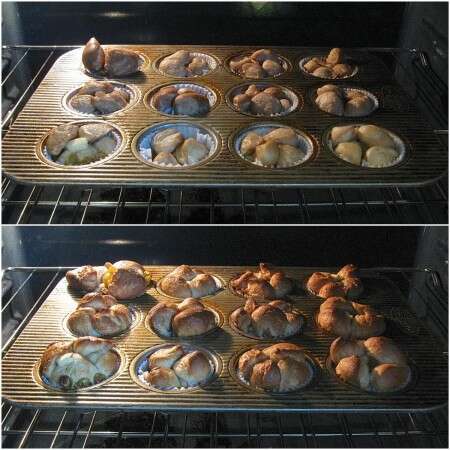 Uncover the risen rolls, and bake them for 15 to 17 minutes, until they're a light golden brown. Don't let them darken too much; they'll be dry. 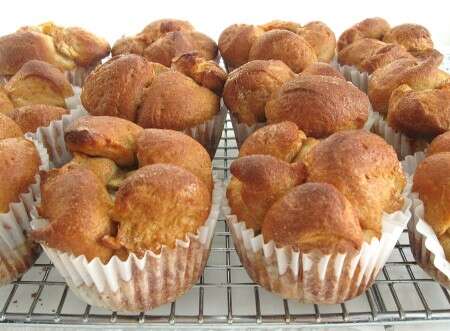 In retrospect, these are too dark; next time, I'll shorten their oven time just a tad. 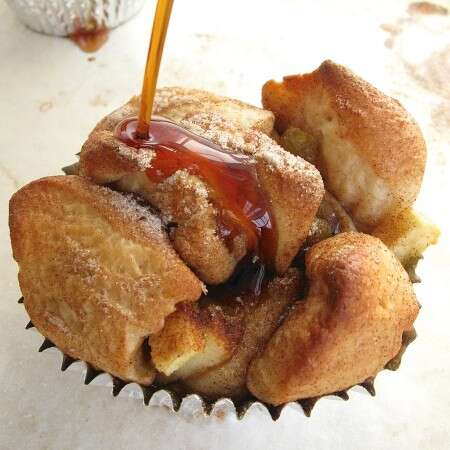 Drizzle rolls with boiled cider, if desired; this will add flavor, as well as a nice stickiness.

When rolls are completely cool, add a simple white icing. 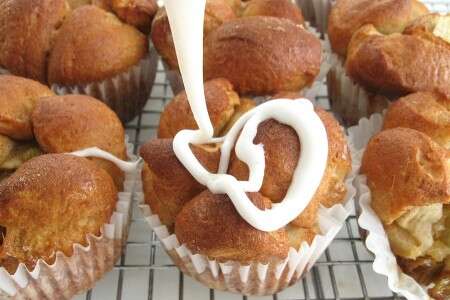 To make the icing, stir together the following:

Drizzle it over the cooled rolls.

[Slaps forehead...] Darn, I forgot the streusel! It should have gone on before the rolls went into the oven.

Sigh... Well, add streusel if you like; here's a good streusel recipe.

Now, in case you're wondering, "Why couldn't she make the recipe fit into a single muffin pan, so I wouldn't have to deal with leftover dough?"

I tried, I really did.

I started with a dough recipe I liked, and didn't want to mess with cutting it down by, like, 20%.

So I did some experimenting with roll size, seeing what would happen if I divided the dough into 12 pieces; 16 pieces; 18 pieces, and 24 pieces. 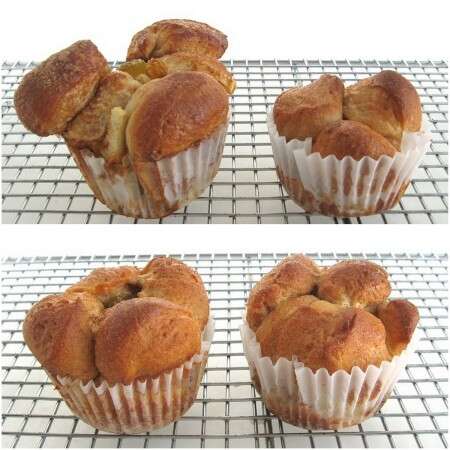 At top left is the dough if you divide it in 12 pieces, perfect for one muffin pan. Alas, the roll was a little too big.

At right, for comparison, is an example of dividing the dough into 24 pieces; too small.

On the bottom row, we see a 16-piece divide at left; an 18-piece at right. Large enough to look generous, but not over-the-top-silly large. 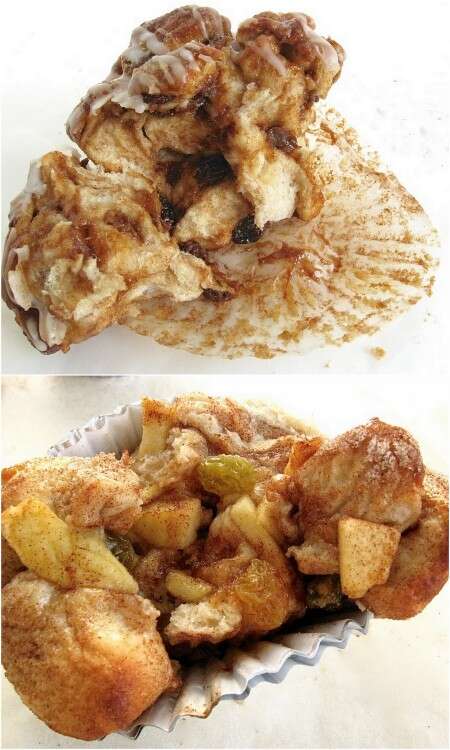 Cobblestone, deconstructed: Panera on top, mine on the bottom. Strangely, I couldn't find any apple at all in the Panera roll, though it did sport a lot of streusel topping and sticky glaze. 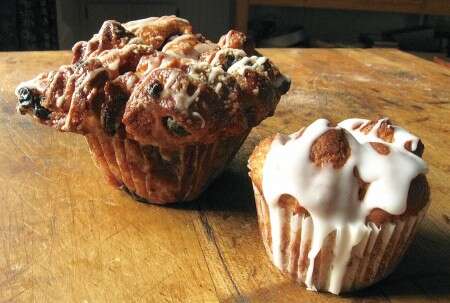 And here they are, side by side: Panera on the left, mine on the right. Clearly, the original Cobblestone is larger. But hey, if you're counting calories, a smaller, more refined sweet roll is just what the doctor ordered, right?

Are there any special bakery or restaurant recipes you've cloned at home... or would love to? Share your favorite "store-bought to homemade" projects in comments, below.

I've been a Panera baker for 15 years. As of January 2016, all artificial ingredients and preservatives have been deleted from the cobblestone (and as of Jan 2017, taken out of ALL of our products). The cobblestone filling (what the dough pieces are mixed with prior to portioning into muffin cups) is a mixture of honey, molasses, brown sugar, vegetable oil, spices, dried chopped apples, and raisins.
Thanks for sharing this update with us, Roxanne. It's helpful to hear feedback like this from an insider! Mollie@KAF
Thanks Barb! I just want to make sure I understand about substituting vegetable oil for the butter. Since it looks like a quarter cup of butter weighs 57 grams, does that mean I put in 57 grams of vegetable oil? Or do I substitute a quarter cup of vegetable oil?
You understood correctly, Rachel. It is equal by weight. Elisabeth@KAF
If I don't want to use dairy products, can you recommend a substitute for the milk? Can I substitute vegetable oil for the butter, or would I be better off using non-dairy margarine? Thanks!
Rachel, any kind of non-dairy milk will work well in this recipe and you could substitute an equal amount of vegetable oil or non-dairy margarine. I assume the butter used is soft butter, but with yeasted bread you can generally substitute an equal amount (by weight) of any fat. The exception would be a recipe that requires butter as a main ingredient, such as brioche. Barb@KAF
I made these with the streusel topping, but without the boiled cider glaze (since I didn't have any). They were good, but were not as gooey as I was hoping for. Also, I found the whole wheat flavor didn't really go that well with this type of roll. Next time I would use 100% AP flour. Also, I think that dipping the pieces in melted butter before rolling in cinnamon sugar (using dark brown sugar) would help to provide the gooey stickiness that I am looking for. Other than that, the rolls were easy to make, and the dough came out nice and light.
Hi, i really want to try this recipe! Sounds and looks scrumptious. But i don't get potato flour near my area. So could you please suggest a suitable substitute for it along with quantity to be used in this recipe? Thanks! Instant mashed potato flakes are a great sub for potato flour. Just use twice as much flakes as potato flour. Enjoy! ~ MJ
Made these this morning with my favorite yeast dough recipe. Instead of the icing and streusel, I put a bit of caramel sauce on the top before baking. It made them perfect sticky buns. Needless to say they were inhaled quickly. Well, now, doesn't THAT sound absolutely delicious! You can't go wrong with caramel and apples, eh? Thanks for the inspiration :) PJH
Made them Friday warm in my kitchen the first rise was double for sure. And the second rise only took an hour. Only apples, sugar and cinnamon were my additions. Wow a do again, a hit with my family and the few we had the next day still moist and wonderful. I used all in bleached flour and those potato flakes. Love the hints in the blog.