You say gelato, I say ice cream... we both say YUM.

So, what IS gelato, exactly?

Italian ice cream, to be exact. But it's a bit more complicated than that...

The ancient progenitor of ice cream, a simple combination of Alpine snow, sweetening, and flavor, was created in Roman times. Modern ice cream was invented in Italy in 1565, followed by the first ice cream machine, in 1686 - also in Italy.

Clearly, the Italians know ice cream. And gelato. And sorbet, a dairy- and egg-free subset of gelato.

It's not just a language difference. Gelato has a lower butterfat content, and slightly less sugar, than most American ice creams. While top-quality American ice cream is typically made from heavy or whipping cream, Italian gelato is based on milk, with egg yolks added for richness, and perhaps nonfat dry milk stirred in for body and texture.

In addition, gelato is mixed differently. Due to the way most manufacturers choose to freeze it, American ice cream might include up to 50% air. Italian gelato, frozen quickly in small batches, includes much less air; it's denser and heavier than American ice cream and thus, despite its lower butterfat, often comes across as creamier and richer.

So the question is, when you make the following pineapple-coconut gelato without benefit of a gelato freezer – is it truly gelato?

Well, it's made with gelato-type ingredients: milk rather than cream, with egg yolks for richness. But it's made in an American-style ice cream maker – or stirred together by hand. Either way, you won't get gelato's signature dense texture.

Still, why quibble over nomenclature? A rose by any other, etc. Bottom line, the following pineapple-coconut gelato/ice cream is both delicious... and attainable at home.

Oh, and one more thing: do you need an ice cream maker to make ice cream? 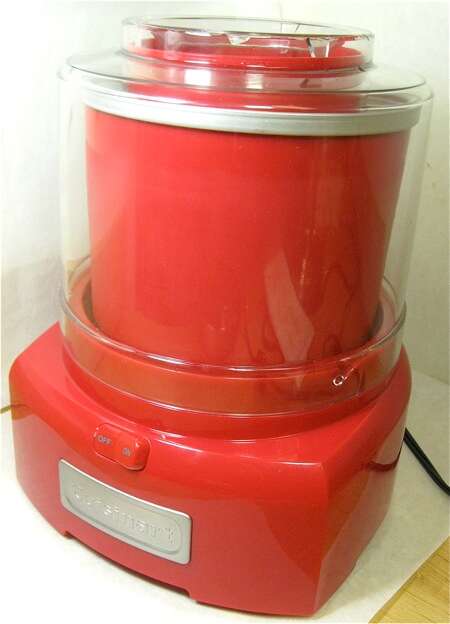 It definitely helps. This Cuisinart is a fixture in our hectic test kitchen. Simply add the ingredients, push a button, walk away, and come back less than 30 minutes later to find wonderfully creamy, perfectly frozen ice cream.

Still, you can definitely make this "gelato" without an ice cream maker; check out the tip accompanying the recipe. 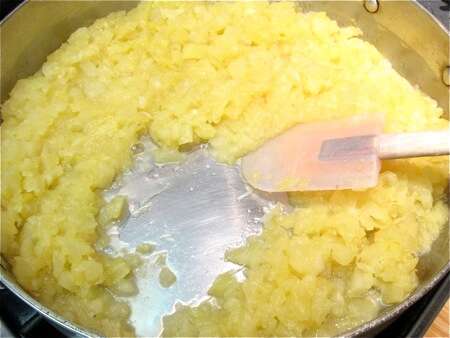 Let's start with a 20-ounce can of crushed pineapple. To get rid of the liquid and concentrate the flavor, we'll simmer it for about 20 minutes in a large saucepan, until most of the liquid has evaporated.

If you want to skip this step, simply drain the pineapple, pressing to remove as much juice as possible, and discard the juice. Refrigerate the pineapple while you prepare the rest of the gelato base. 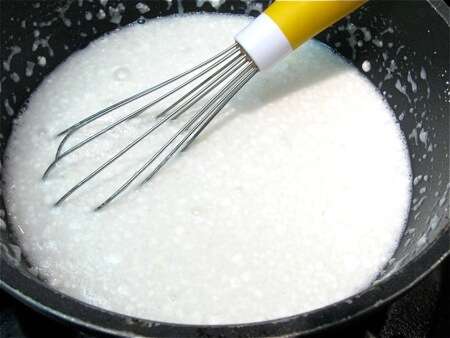 Whisk together the following in a saucepan:

*You'll need a 13.6-ounce can coconut milk; you'll use 1 cup here, and the remainder later on.

Cook over medium heat, stirring frequently, until the mixture begins to simmer. It won't be totally smooth, but whisk to remove as many lumps as possible. 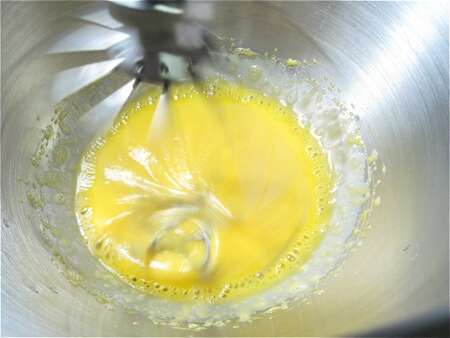 While the milk/sugar mixture is heating, put 2 large egg yolks in a bowl, and whisk to combine. 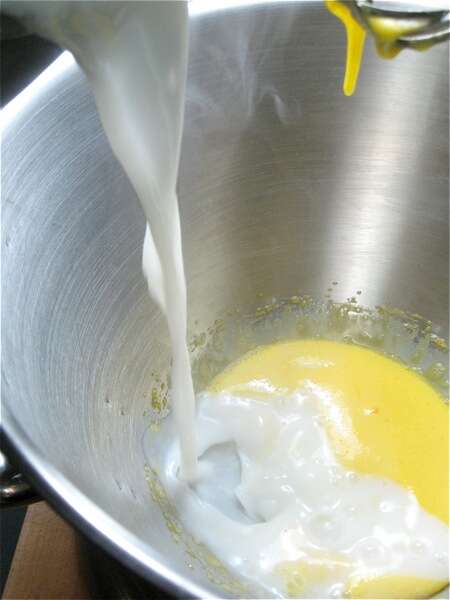 Gradually pour about 1 cup of the hot mixture into the bowl with the egg yolks. 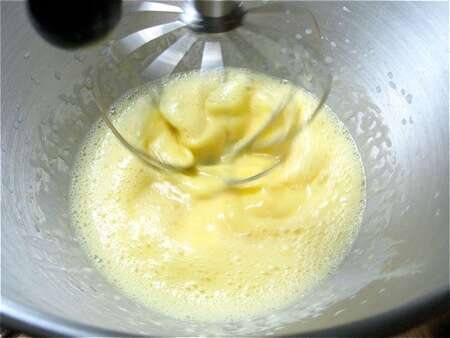 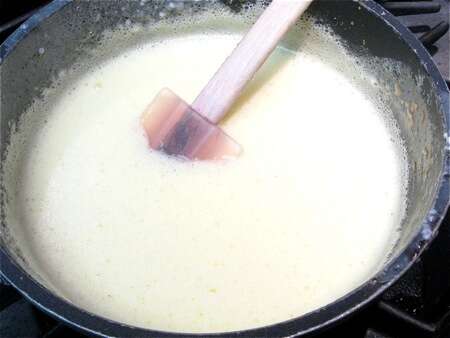 ...then transfer the egg yolk mixture back to the saucepan. 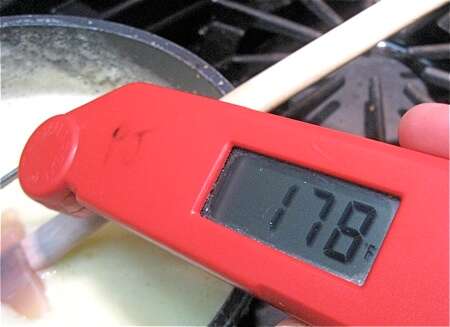 Stir the custard over medium-low heat for a couple of minutes, until it thickens a bit; it should be about as thick as heavy cream. If you have an instant-read thermometer, the temperature should reach 178°F. 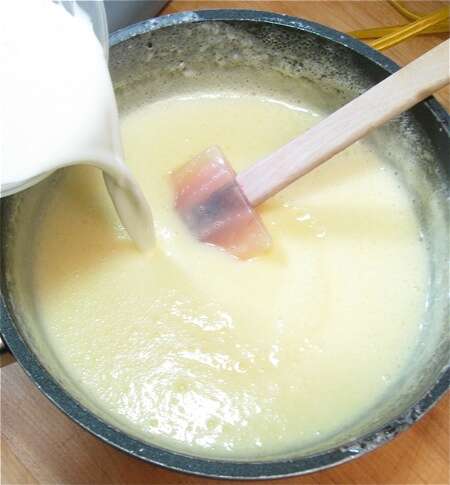 Remove from the heat, and stir in the remaining 2/3 cup (approx.) coconut milk.

And now, for a little flavor boost, courtesy of some extra-strong flavors. I've chosen coconut today; pineapple or banana would be equally tasty, methinks. 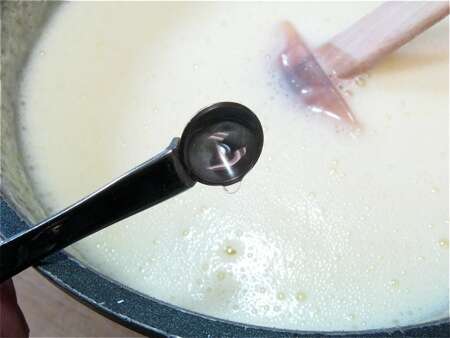 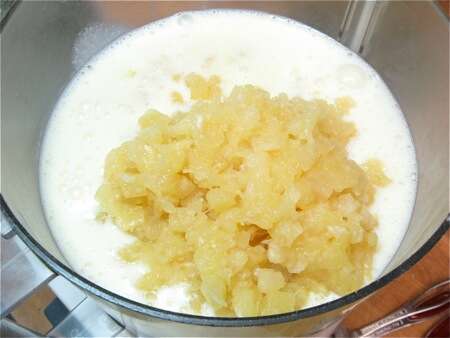 Transfer the custard to a food processor or blender, add the pineapple, and process until it's as smooth as possible. 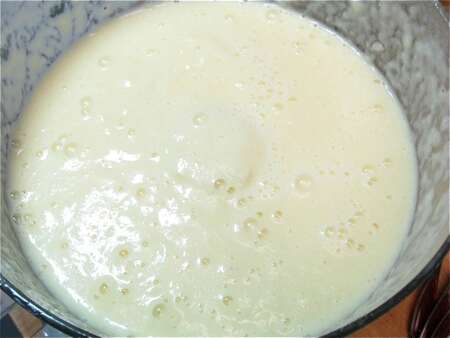 The pineapple won't become a purée, but there shouldn't be any large chunks.

Transfer the custard to a covered container and refrigerate overnight. Make sure the canister of your ice cream maker is in the freezer, too. 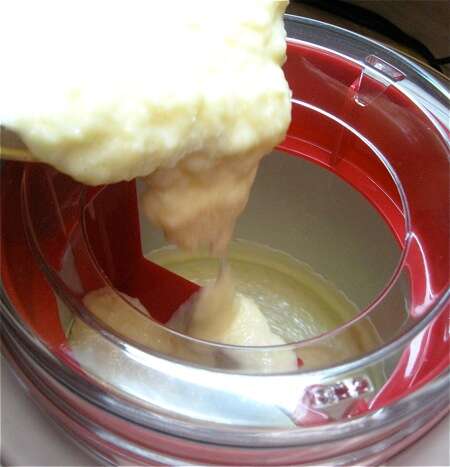 Within about 4 hours of when you want to serve the gelato, pour the custard into the canister of the freezer, turn on the machine, and let it work for about 20 minutes. 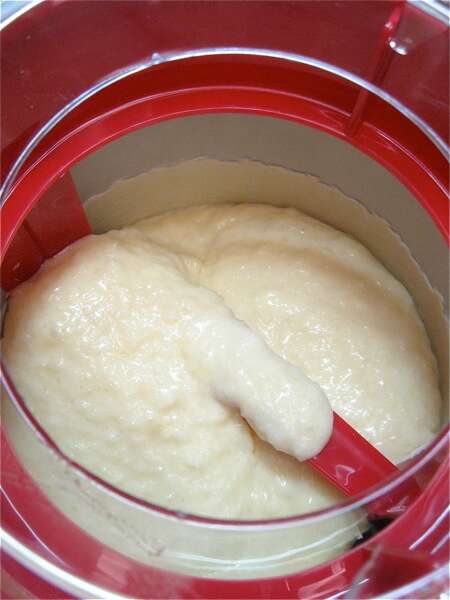 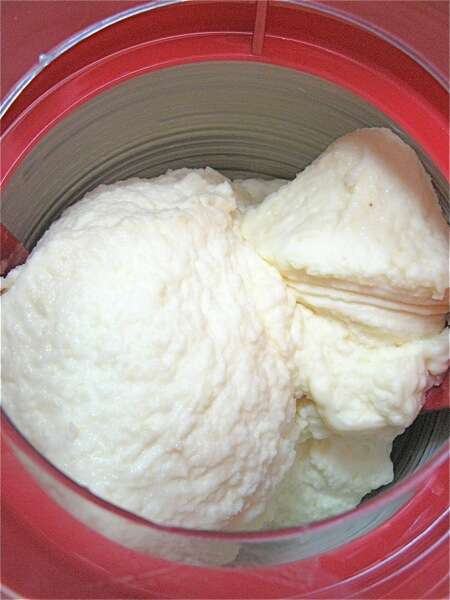 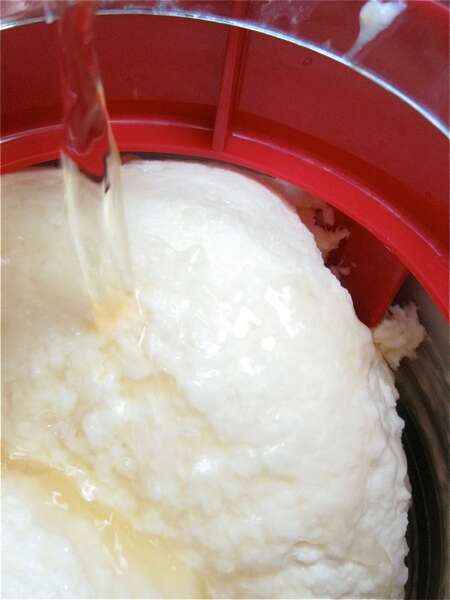 When it's thick enough to mound on a spoon without dripping, add 1 to 2 tablespoons (14g to 28g) rum, or your other favorite spirit, if desired. The rum not only adds its own tropical flavor; like all alcohols, it's a flavor carrier, enhancing the taste of all its surrounding elements.

Can you leave the rum out? Of course. But oh, my, it surely adds a tasty touch! Plus, if you use the full 2 tablespoons, the rum will prevent the gelato from becoming rock-hard in the freezer. Even after a week (if it lasts that long), it'll be beautifully scoopable. 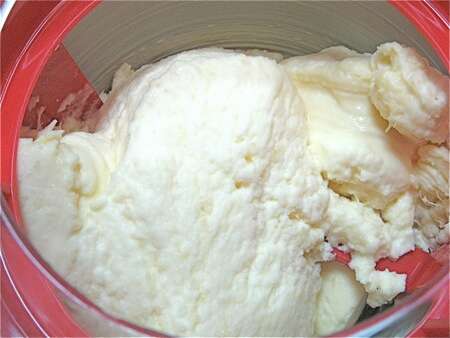 Continue to mix briefly, until the rum is fully incorporated. 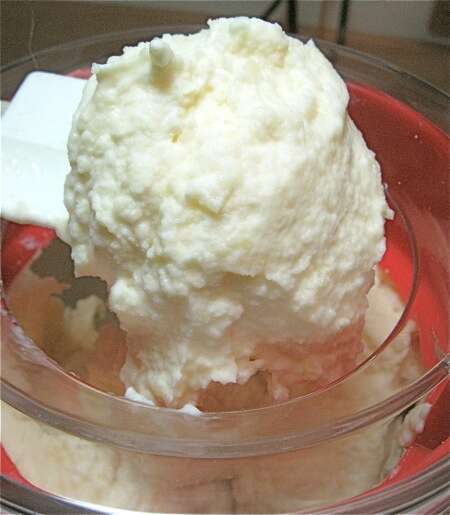 Enjoy the gelato immediately, if you like; it'll be the consistency of soft-serve ice cream.

For firmer texture, place the gelato in your refrigerator's freezer compartment for 3 to 4 hours. If it gets too hard, simply let it sit at room temperature for about 20 minutes, or until it's soft enough to scoop. 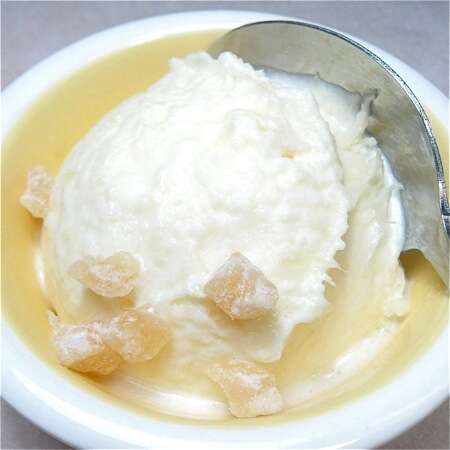 A garnish of diced dried pineapple is a nice touch, both taste- and texture-wise. 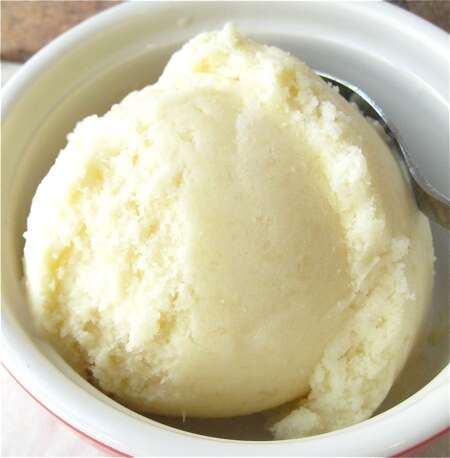 Here's the gelato after it's been in the freezer for a few days. Because of the rum, it's still nicely scoopable, not ridiculously hard.

And the flavor – I'm not a huge fan of tropical-type ice creams, my taste running more towards caramel swirl mocha chocolate chunk and its ilk. But the pineapple and coconut in this gelato... well, they're just pure blue-water, white-sand, Coppertone bliss. 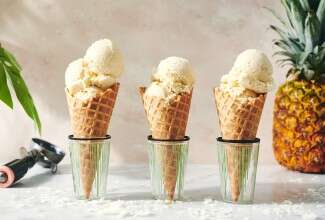 I used to think that tropical flavors were one of the least good flavors for ice cream, but after starting my ice cream parlor, I've received massive demand for it. I'll make use of this recipe as I prepare a new menu centered on tropical gelato pints. Thanks! 4gelato.com/pints/

Curious if the recipe states, 2 tbsp of powder milk and 2 tbsp coconut powder - optional, do we then make it with 4 tbsp of regular powder milk if we omit the coconut powder?
If you don't have any coconut milk powder, Melanie then you can simply omit this ingredient. Still use just 2 tablespoons of non-fat dry milk granules. But... we hope you'll consider adding this ingredient to your pantry. If you're a coconut lover, this is for you! Happy ice cream making! Kye@KAF
I am floored. I'm dying. I want this gelato right now!! I am obsessed with anything pina colada. I can't fathom making it through the day without it, but unfortunately I already baked a cake. Next weekend for sure! http://unhipsquirrel.blogspot.com

Yippy! I just bought a White Cuisinart Frozen Yogurt-Ice Cream & Sorbet Maker! And just look at your recipes! Can't wait to try it out, & your Coconut & Chocolate Decadence Recipes. Oh, & I do have a Food Processor as well-just in case I need it to make the right consistancy for other recipes.Looking forward to making lots of Gelato, & Granita as well.Thanks a lot. Granita - now I didn't think of that. Thanks for the reminder! Enjoy - PJH

For people who have problems with dairy, DO NOT USE ANY BRAND OF COCONUT MILK POWDER. THEY ALL CONTAIN COW MILK PROTEIN. Just use coconut milk from Thailand sold in cans. The "regular" is pretty rich, and the "lite" is still thick enough to make a good gelato. Warm up each can in hot water for a minute to make sure you can blend smooth.
Wow! Put this in a fancy glass, garnish with a pineapple wedge and a little paper umbrella and waalla - my favorite tropical drink - a Pina Colada, Double Yum!
I can't use the dry milk powder, could I simply use 4 tablespoons total powdered coconut milk? You could omit the milk powder, or you can use soy milk powder instead, as previously stated in a lower comment. It just helps build a bit of extra creamyness. You can use more coconut powder if you wish, as increasing the coconut powder would definitely make this extra coconutty! ~Jessica
This does sound great...I have the Cuisinart machine (bought it last year) and I just love it! I definitely want to try this recipe, but to repeat Sarah's question from above: Are "non-fat dry milk granules" the same as non-fat dry milk powder? I have plenty of the Baker's Special Dry Milk on hand, but the recipe says specifically not to use that. So what are "non-fat dry milk granules"? I don't see them offered on your website....please advise! Sandy Sandy, yes, same as nonfat dry milk powder. Measure by weight, though, as the powder weighs different than the granules. If you don't have a scale, just wing it - use a bit less powder than the recipe specifies. PJH
Would this work without the powdered milk for someone who is lactose intolerent? You shouldn't have any problems omitting the dry milk, but you can always use soy milk powder instead. ~Amy