You can mash potato too – in doughnuts!

Berry Gordy Jr. wrote that he could “dance the mash-potato,” but he probably never used mashed potatoes to make cake doughnuts. This magic ingredient and the following recipe from Grammie Nut will bring you back to that picture-perfect fall day - the one that  isn't complete without a cup of fresh cider and  an old-fashioned (a.k.a. cake) doughnut.

Every community has an expert home cook - the untitled caregiver of the community who's the first to arrive at the fire department with sustenance for the firefighters, or the first one on your doorstep when you're in the midst of family marker events - taking care of you whether you're family or not!

Births, deaths, celebrations, ripe fruit or vegetable season - Bea's kitchen (Grammie Nut, as she was known in our town) was the source of both sweet and savory aromas.  She's no longer with us, but her son-in-law makes these doughnuts and serves them at a local diner. You'll find similar donuts in the big glass jar on the counter at many New England diners. 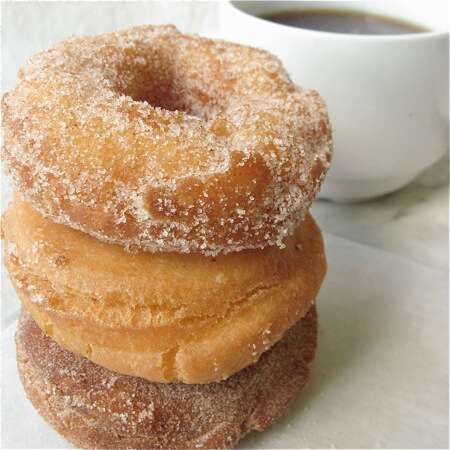 Cake or old-fashioned donuts are leavened with baking soda or baking powder. Yeast or raised doughnuts are distinctive, as they're usually bigger and puffier (yeast and a rest or proofing period contribute to this); and they're often dipped in honey glaze.

The following recipe is for Mashed Potato Doughnuts. If you're looking for a cake-type buttermilk doughnut with a touch of whole wheat, check out our Old-Fashioned Cake Doughnuts. 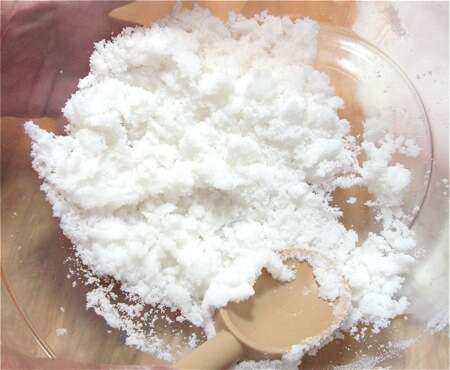 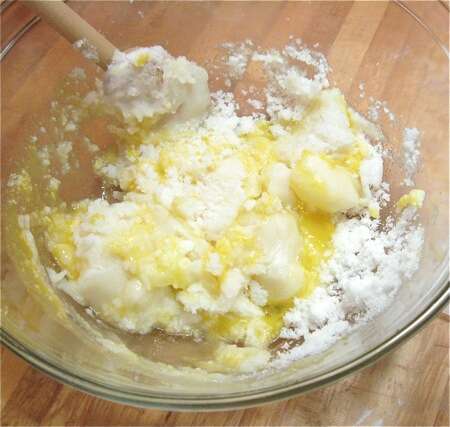 Add to this creamed mix the eggs and mashed potatoes.

Mashed potatoes help hold the moisture in baked goods for moist, tender results. Got just a bit of leftover mashed potatoes? This recipe is a perfect way to use them up!

Pumpkin donuts would be another great fall treat... you could substitute canned puréed pumpkin for the mashed potatoes in this recipe. 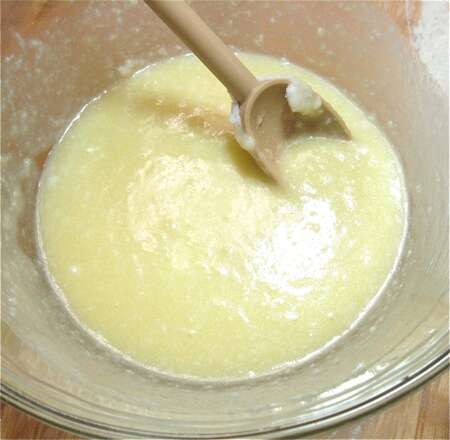 Blend together the creamed mixture, potatoes and eggs, then measure out the milk.

Save the milk to add to the rest of the ingredients later. 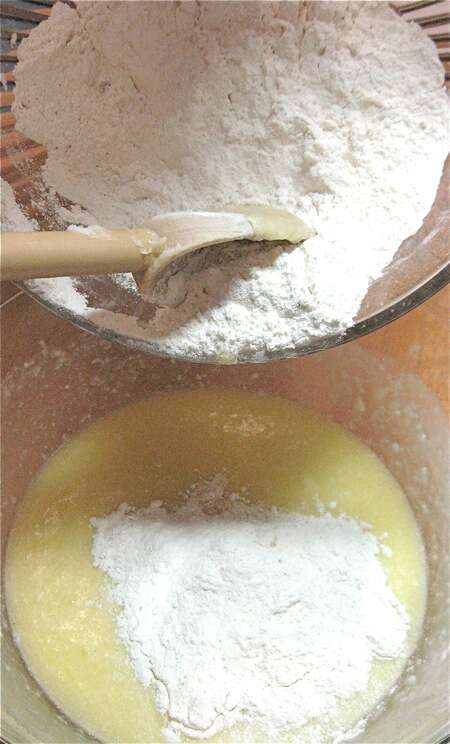 Start with about 1/3 the amount of the dry ingredients added to the creamed mixture. 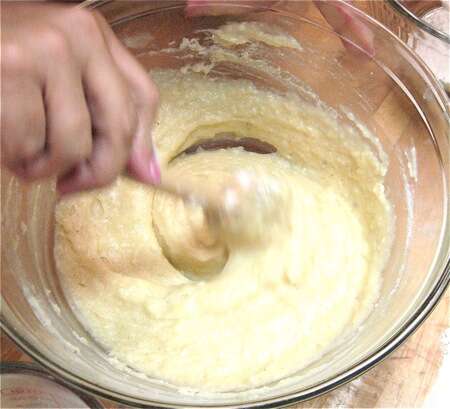 Here is the first addition of the dry mixture stirred into the creamed mixture. 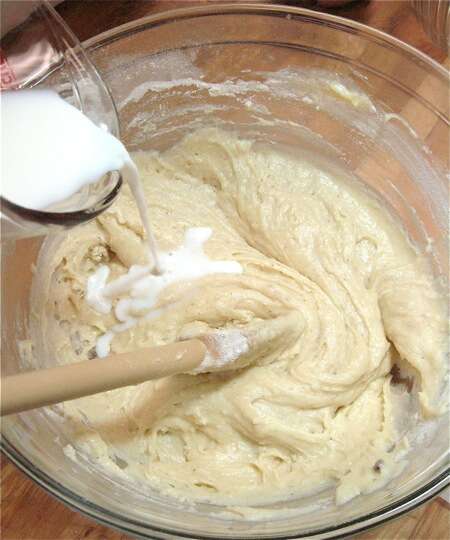 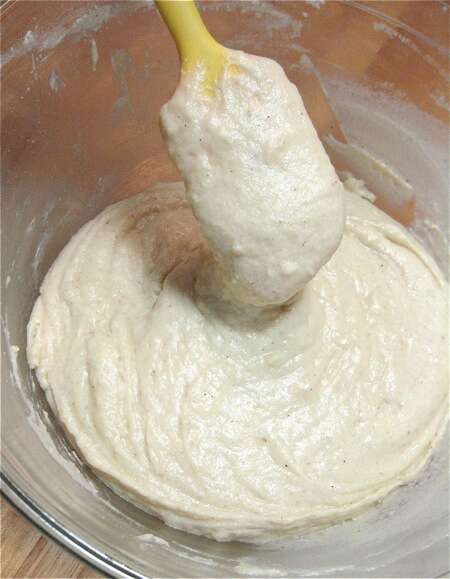 Once the dough is mixed, it can either be refrigerated; or shaped and fried immediately. 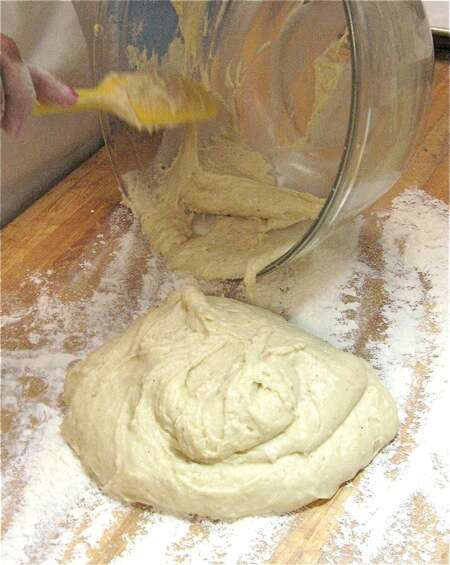 This day, we decided to cook off the doughnuts right away.

Turn the dough out onto a heavily floured surface to knead slightly. 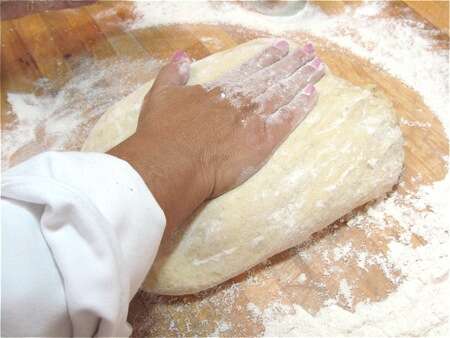 Strive for a soft dough that's thick enough to cut and hold its shape. 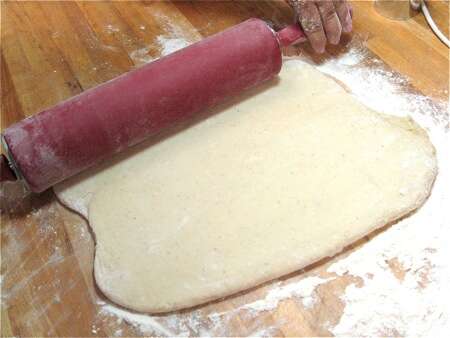 Roll the dough at least 1/2” thick.  Some doughnut makers prefer to pat the dough; others use a rolling pin. 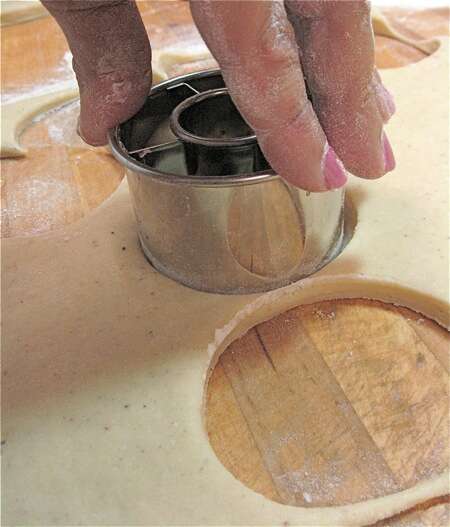 Using a doughnut cutter, cut the doughnuts and toss from hand to hand to remove extra flour. 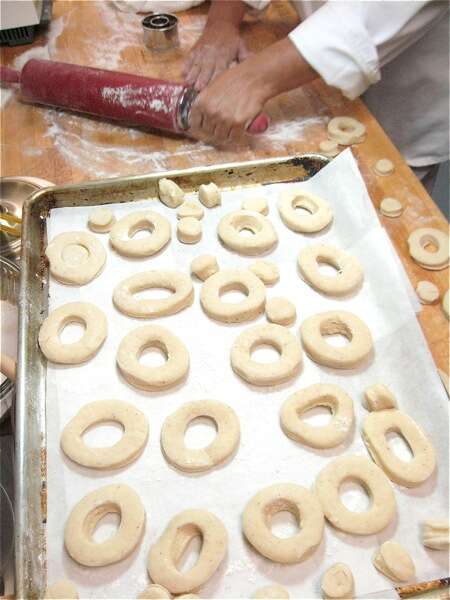 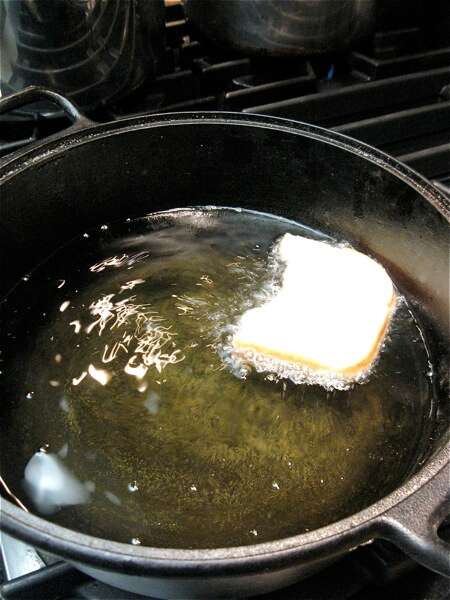 Heat grease or fat using medium-high heat - on this day we used vegetable oil and peanut oil for frying. Test the grease with a slice of white bread. The grease should bubble around the edges. 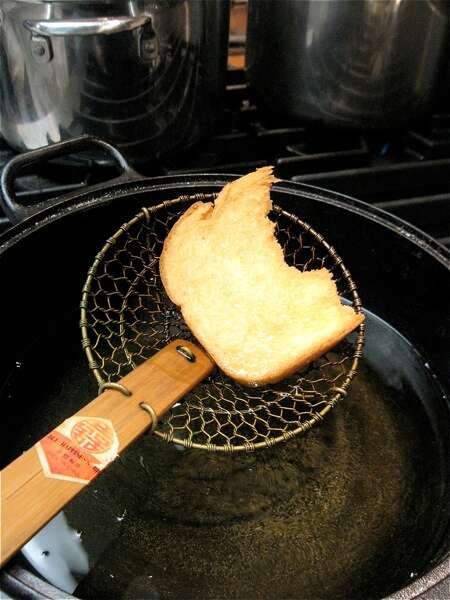 Pick up the bread and peek at the fried side.  If it's golden brown after 1 minute, the temperature of the fat will be about 365°F - a good temperature for frying doughnuts. 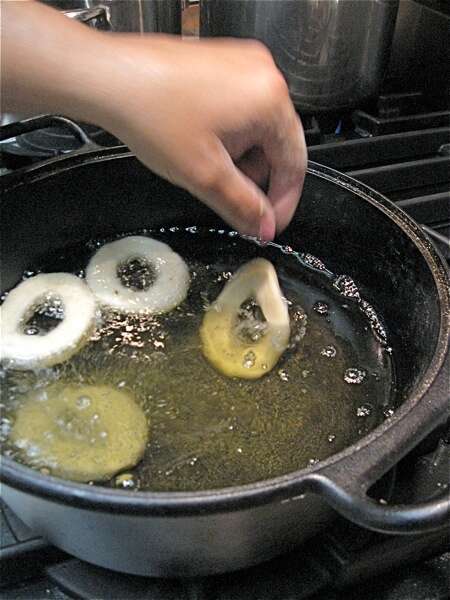 Gently lower the doughnuts into the hot fat. As soon as the doughnut is close to the fat, release your grip and lift your hand up. This prevents dive-bombing doughnuts, and splashing fat! 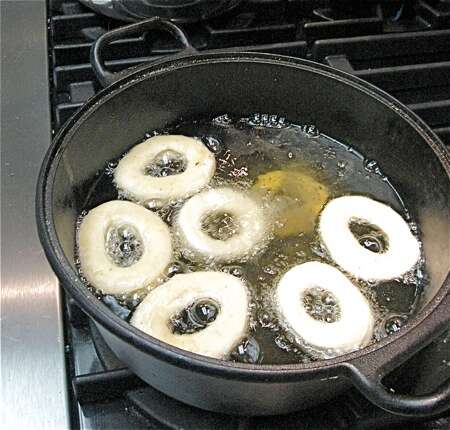 Fry the doughnuts one layer at a time. 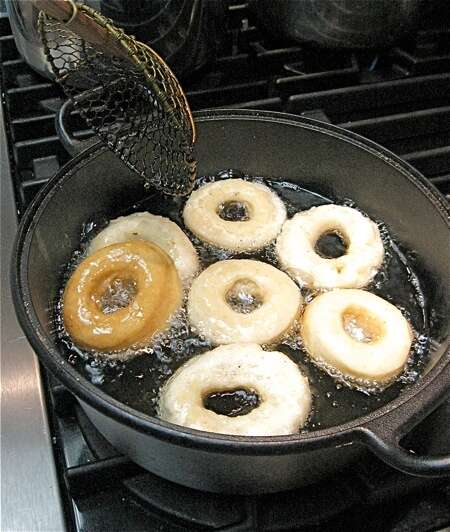 Turn the doughnuts when the first sides are golden brown.

This piece of equipment is called a spider. It's from my wok set, and is the best tool for frying doughnuts, especially the holes. To fry the holes, place one layer of doughnut holes in the spider, and lower the spider into the hot grease. The holes will float and you can remove the spider to let them continue to cook.  The bagel strainer is another great tool for this! 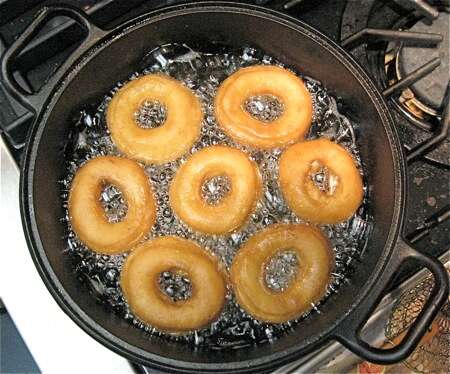 Once the doughnuts are golden brown on both sides... 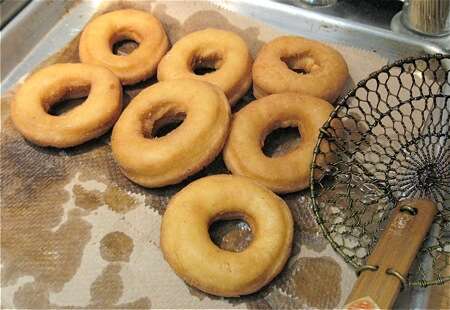 ...remove them from the fat, and drain on paper towels. 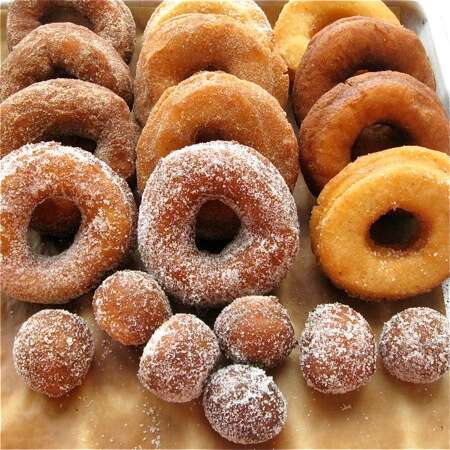 Mix together 3/4 cup granulated sugar and 1 to 2 teaspoons cinnamon in a paper bag. Gently shake warm doughnuts in sugar/cinnamon mix, or leave plain.

The doughnuts at left, above, are coated in our Cinnamon-Sugar Plus. Doughnuts on the right are plain; and doughnuts in the front were coated in plain granulated sugar. 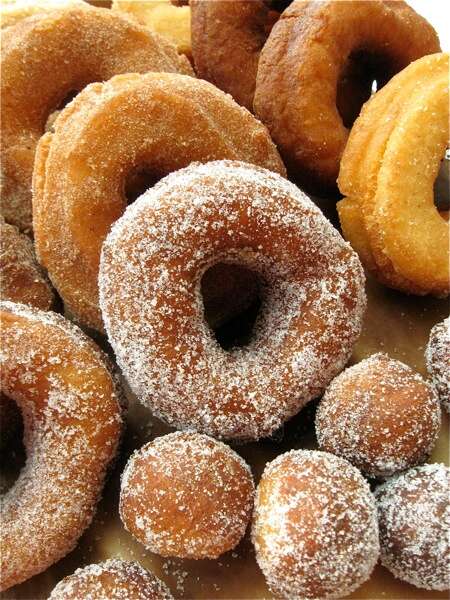 Bea's original recipe was also published in a fundraiser cookbook for our local library in the ’70s.  It calls for 5 cups of flour and 4 eggs, so to reduce any concerns about ingredients, I halved the recipe for you. Older recipes tend to be much larger than people these days want to make!

Pour yourself a cup of coffee or cider and enjoy this fall treat!

Jump to Comments
Share
Tagged:
Filed Under: Recipes
The Author

Has anyone tried modifying this recipe to make it a cider donut (and mashed potatoes)? If so, how'd you go about it and how'd it turn out?

Hi Geoff, this is not something we've tried here in the test kitchen, but maybe one of our baking friends has experimented with a cider/mashed potato doughnut? I think it would work to substiute boiled cider for part of the liquid, and perhaps some applesauce for some of the mashed potato, but you'll want to keep the moisture/flour content consistent with the original recipe. Check out our Apple Cider Baked Doughnut recipe for some ideas on flavoring.

Can you bake them in lieu of frying?
Looking to make baked doughnuts, Emily? We can help! You might want to consider using our Maple Doughnuts recipe, which calls for some potato flour in the batter. This evokes a similar amount of tenderness and flavor to the mashed potatoes in this recipe, but yet, it's baked! You can omit the maple flavor from the batter if you want more of a blank canvas to dress up the doughnuts as you wish. Happy baking! Kye@KAF
Is it possible to use king Arthur gluten free flour in this recipe
Hi Dorothy, If you'd like to make this recipe gluten-free, simply replace the all-purpose flour with our Gluten-Free Measure for Measure. (Be sure you're using Measure for Measure are not our Gluten-Free Flour.) No other changes are necessary. It's really that easy! Enjoy, Kye@KAF
Thanks PJ! I do have a mixer but it's five quarts and that does not go very far when making big batches I made 400 sandwich cookies and 600 brownies this summer so I've learned about staging.It requires the three Ps... Planning, prep, and patience on the part of my wife as I took over the kitchen and part of the family room (for packaging). And thanks for the peanut oil tip as well.
Hi, I have a question about fat. Do you use the peanut oil to raise the smoking point? And does the flavor of the peanut oil overwhelm a more neutral vegetable oil? Could I use a little clarified butter added to the oil? If not using a stand mixer do you have suggestions on scaling this up so I could make a big batch at once? Maybe 10 dozen or so for a couple of functions? Thank you
Aaron, the peanut oil does raise the smoking point, but beyond that I simply like the flavor (not peanuts, something indescribable) it gives deep-fried foods. For the big function - easiest for you, certainly since you don' have a mixer and would be doing this by hand? – would be to have helpers who could each make part of the dough, and bring it to you for frying. Other than that, I'd say make five double batches, refrigerating each one as it's made. Frying the doughnuts closest to when you'll be serving them is optimal, but I don't know if your schedule allows that. You could try frying, storing at room temperature, then reheating for about 10 minutes in a 350°F oven just before serving. Good luck! PJH
I love love loveeee this recipe! (See my previous comment) My question is now that I have mastered it, is it possible to skip punching the hole and fry it round and fill it with pastry cream a la Boston Cream? Yes, I'd think so. You might want to make them a bit smaller. to fry them all the way through; too big a doughnut, and the center would be doughy... Good luck! PJH