How to prevent the gap in pie crust

Apple pie: everyone's favorite fall dessert. You've mixed and rolled, peeled and sliced, filled and chilled, baked and cooled and cut and... AAARGGHHH! The filling has shrunk to a shadow of its former towering self, while the crust has stubbornly held its ground, yielding apple pie with a large and unsightly chasm between apples and crust. What's a baker to do? Fear not; these five simple tips will help you eliminate that irritating gap in pie that sometimes appears.

Now, the first order of business here is to create the gap in pie that occasionally plagues all of us. I have some ideas for forcing this "error" as I make one of my favorite apple pie recipes; let's see what happens. 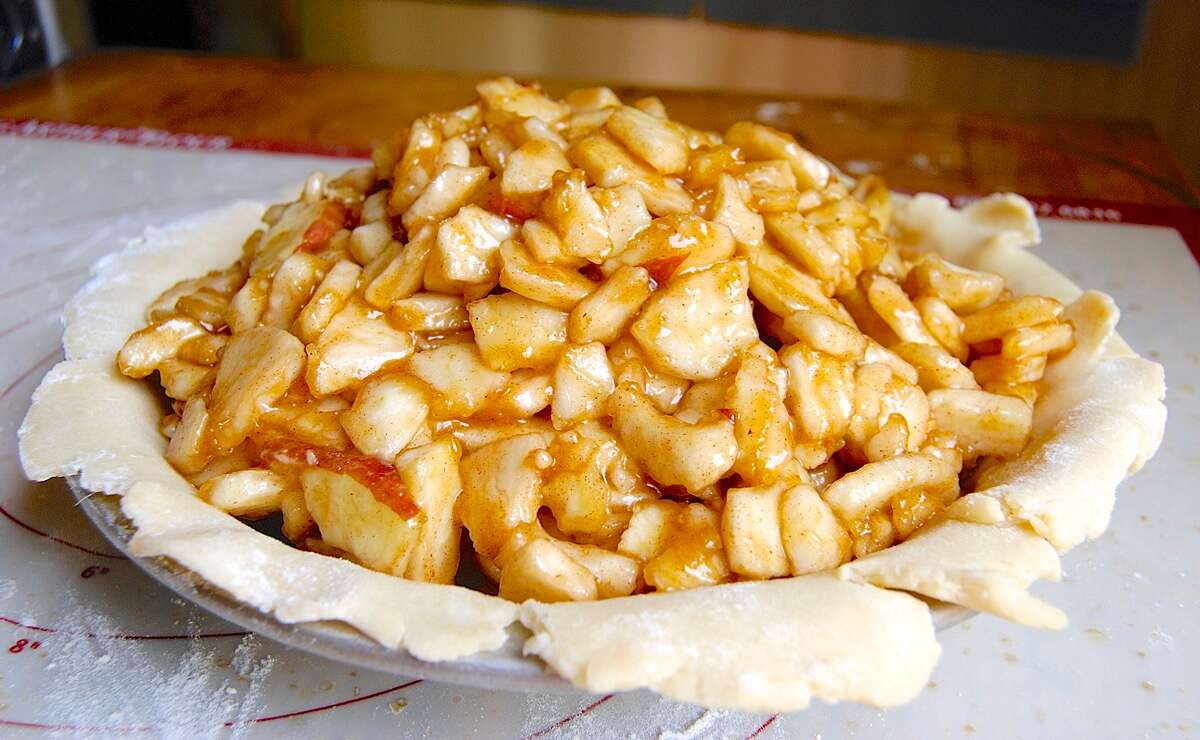 First, I'm going to really heap McIntosh apples in my pie crust. Macs are notorious for shrinking as they bake; so if I really pile them high before covering with pastry, there's every chance they'll cook down — while the crust retains its original loft. 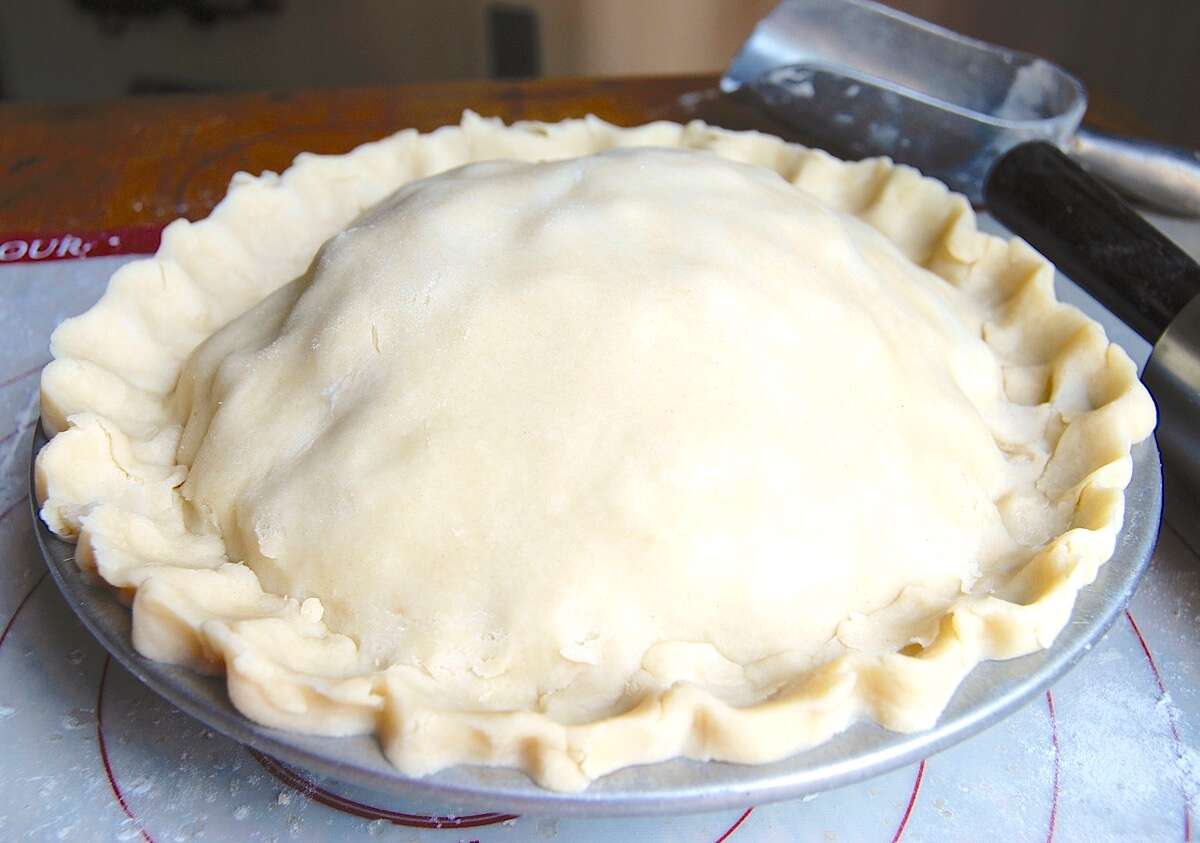 Next, I make it easy for the crust to puff up as it bakes (rather than settle down) by not venting it anywhere. With no place for the apples' steam to go, the top crust will expand like a balloon. 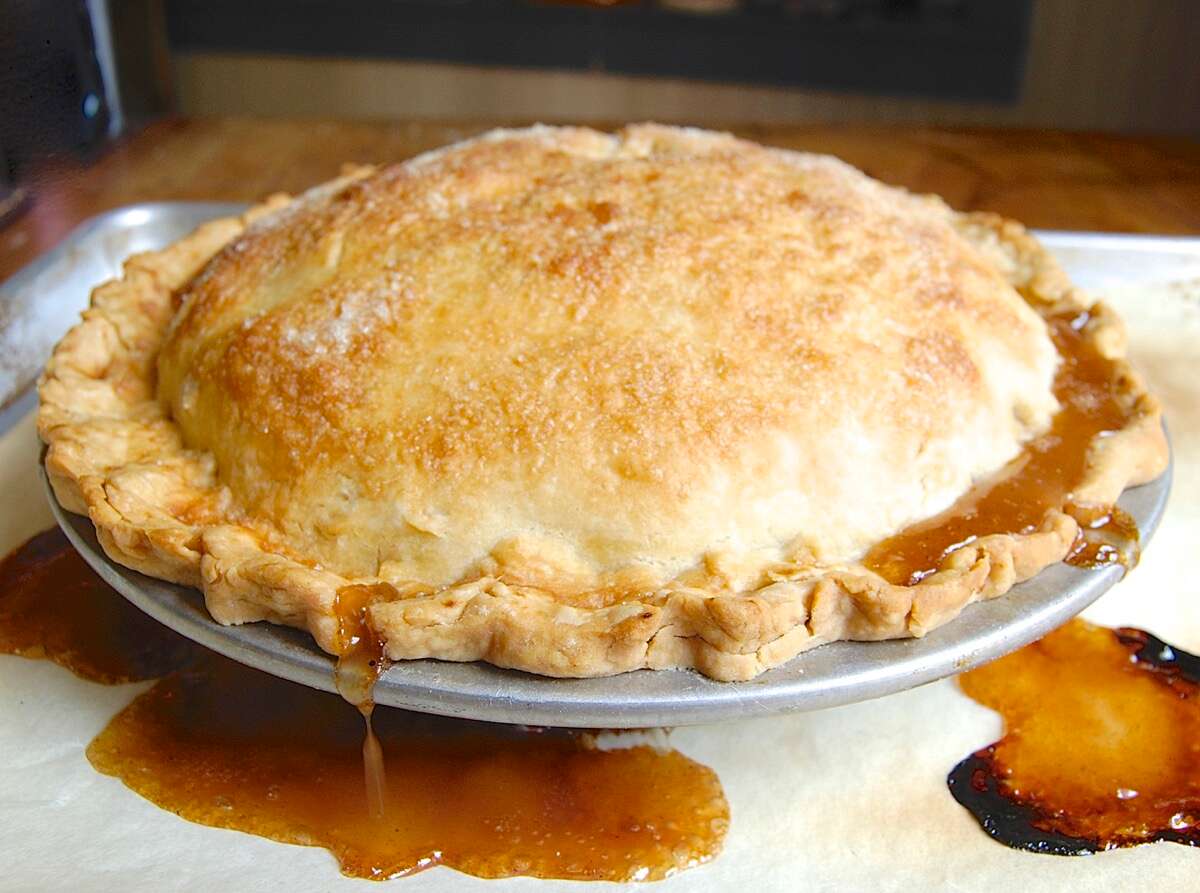 Here's the baked pie. Bubbling juice managed to seep out around the edge, but it looks like the crust is pretty much intact — and in basically the same position as when I put the pie into the oven.

Once the pie cools, I warily cut it in half. 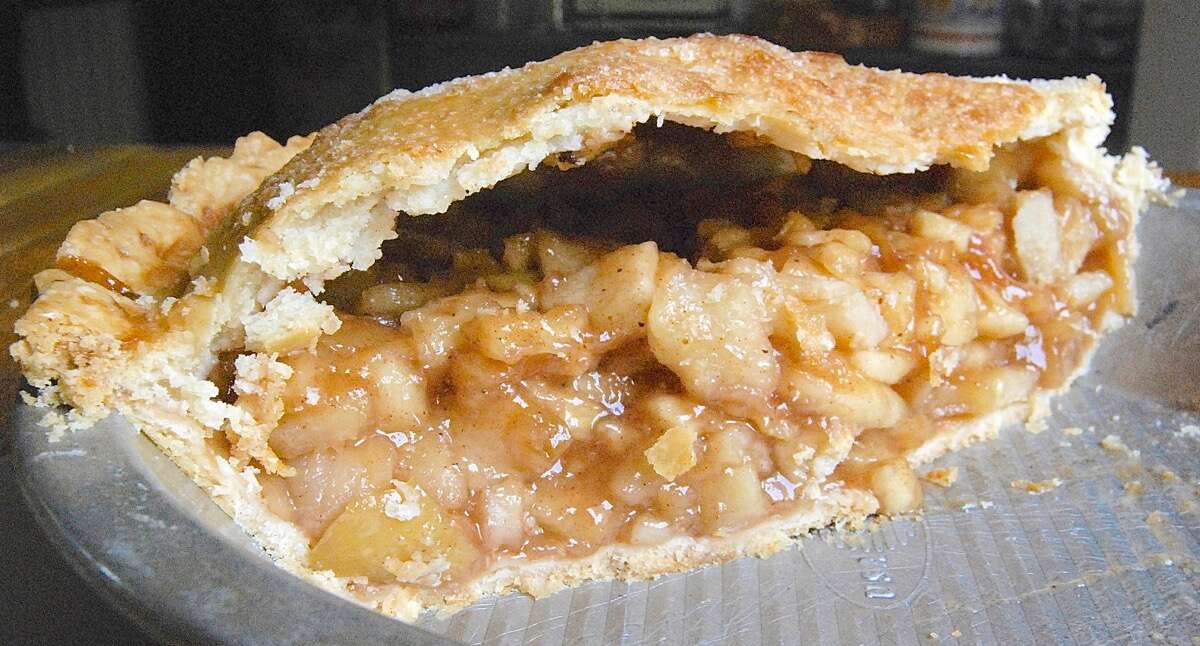 Score! I've never been so happy to see a failure. This is exactly the result I was hoping for: the gap in pie we all try to avoid.

Now let's see how to prevent it. 1. Use butter, not shortening

The solidity of unmelted fat is part of what helps pie crust hold its shape as it bakes. Shortening has a higher melting point than butter; thus pastry made with shortening will hold its shape longer than one made with butter. The result? Pie crust made entirely with shortening will produce pie with a wonderfully crisp crimped edge, but also — potentially — a gap beneath the top crust. 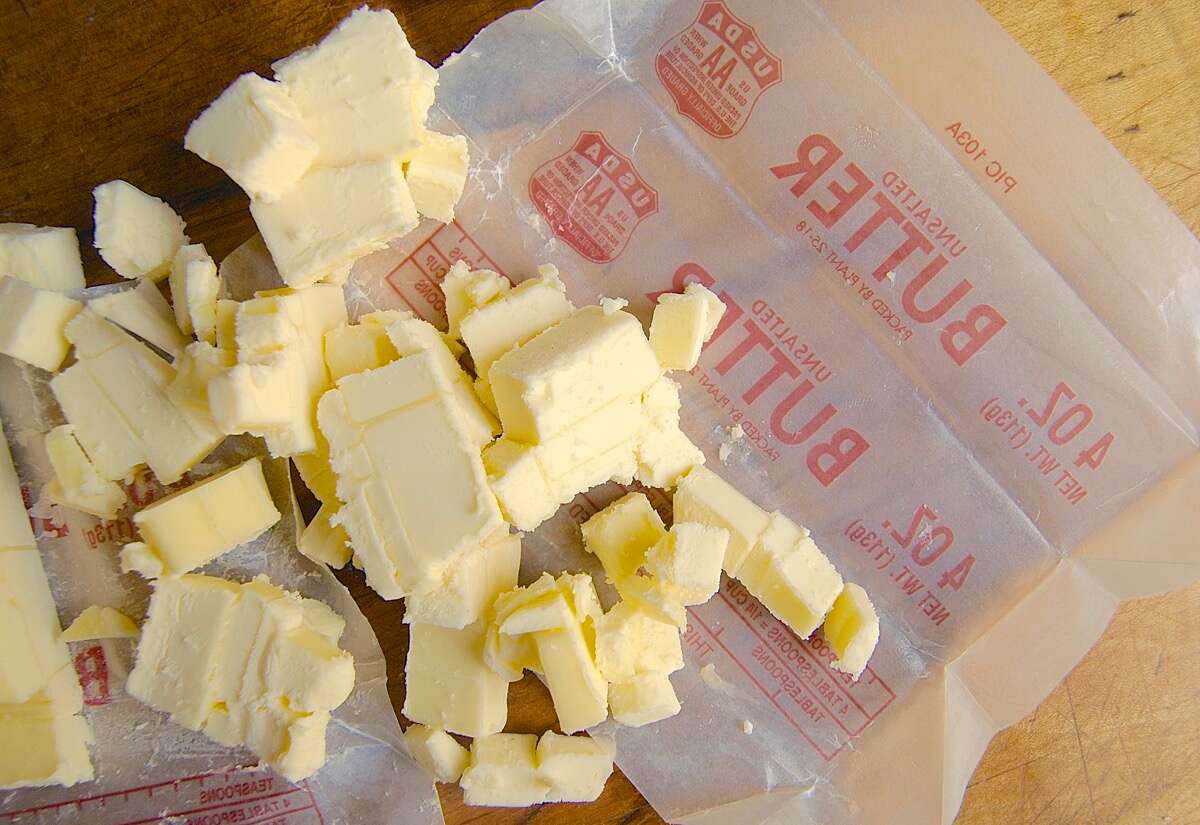 A pie crust based on butter is less likely to make a gap in pie than one made with shortening. 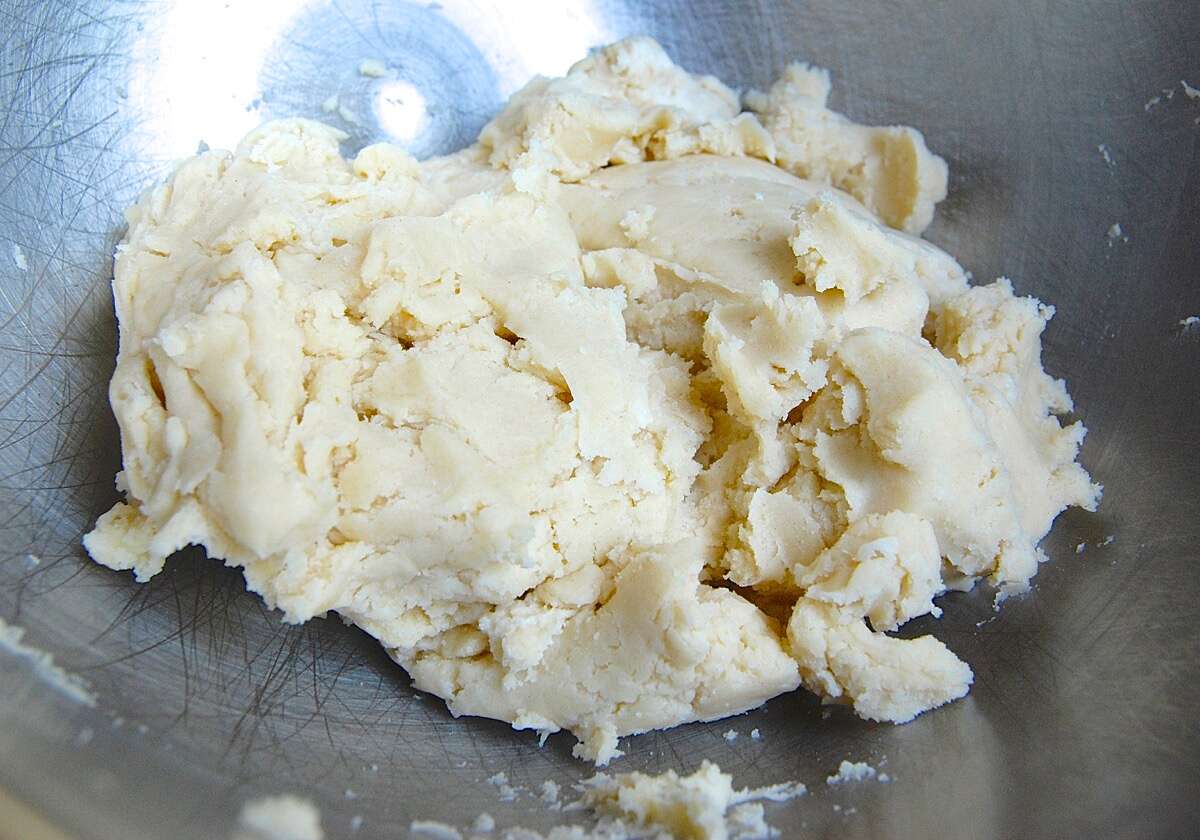 2. Keep water to a minimum

But wait — a wetter pastry makes a tougher crust. Why? Water activates and strengthens the gluten in flour: good for a crusty baguette, not so good for tender pie crust.

And a tougher crust translates to crust that holds its shape. Which is NOT what you want as the apples underneath that rigid crust slowly settle into the bottom of the pan as they bake. 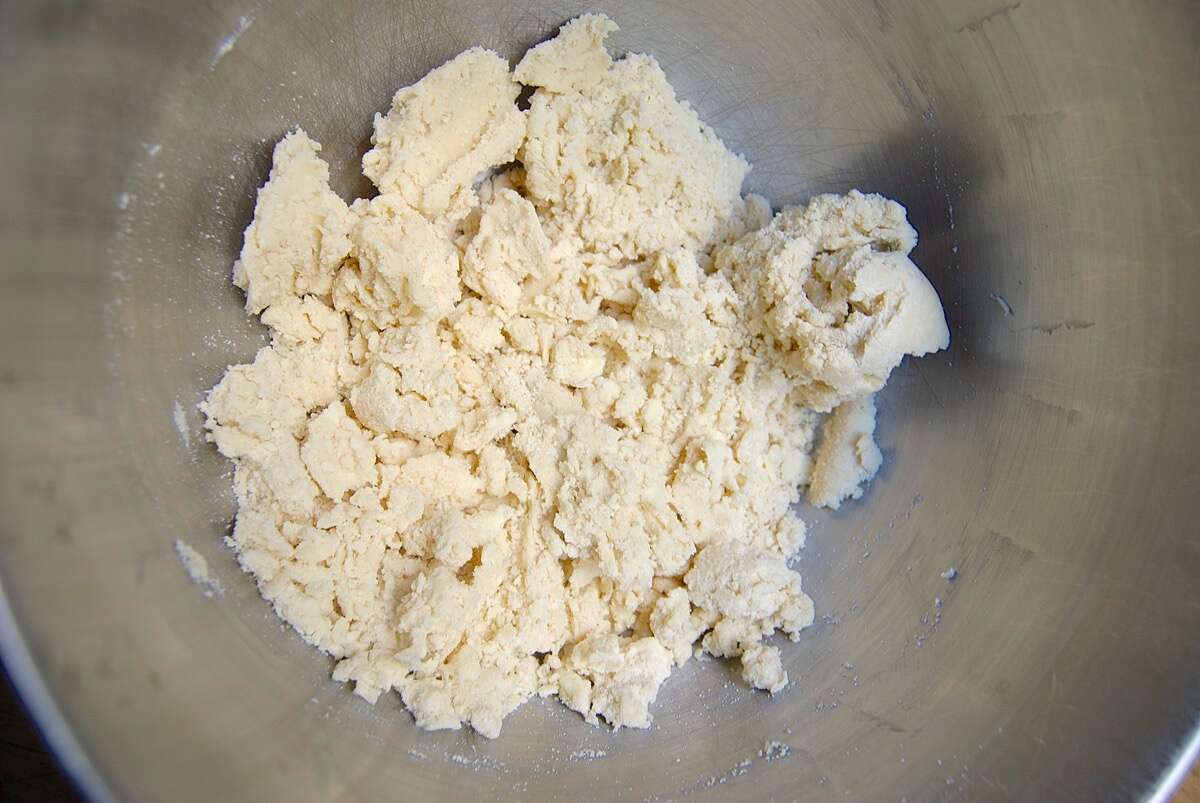 For tender crust, use less water. See how dry this butter pastry looks? Squeeze it together, it still looks fairly dry; see the crumbs in the bottom of the bowl? But after 30 minutes in the fridge — which gives the water a chance to fully hydrate the flour — the pastry rolls out beautifully. And produces a pie crust that's tender, flaky... and won't contribute to that gap in pie you're trying to avoid.

Good rule of thumb: for a tender, flaky pie crust, use more fat than water (by weight). If your recipe calls for, say, 6 tablespoons (3 ounces) butter and 1/2 cup (4 ounces) water, beware: a tougher crust is in the offing. Two of my favorite more-fat-than-water crusts are Classic Double Pie Crust, and All-Butter Pie Crust. 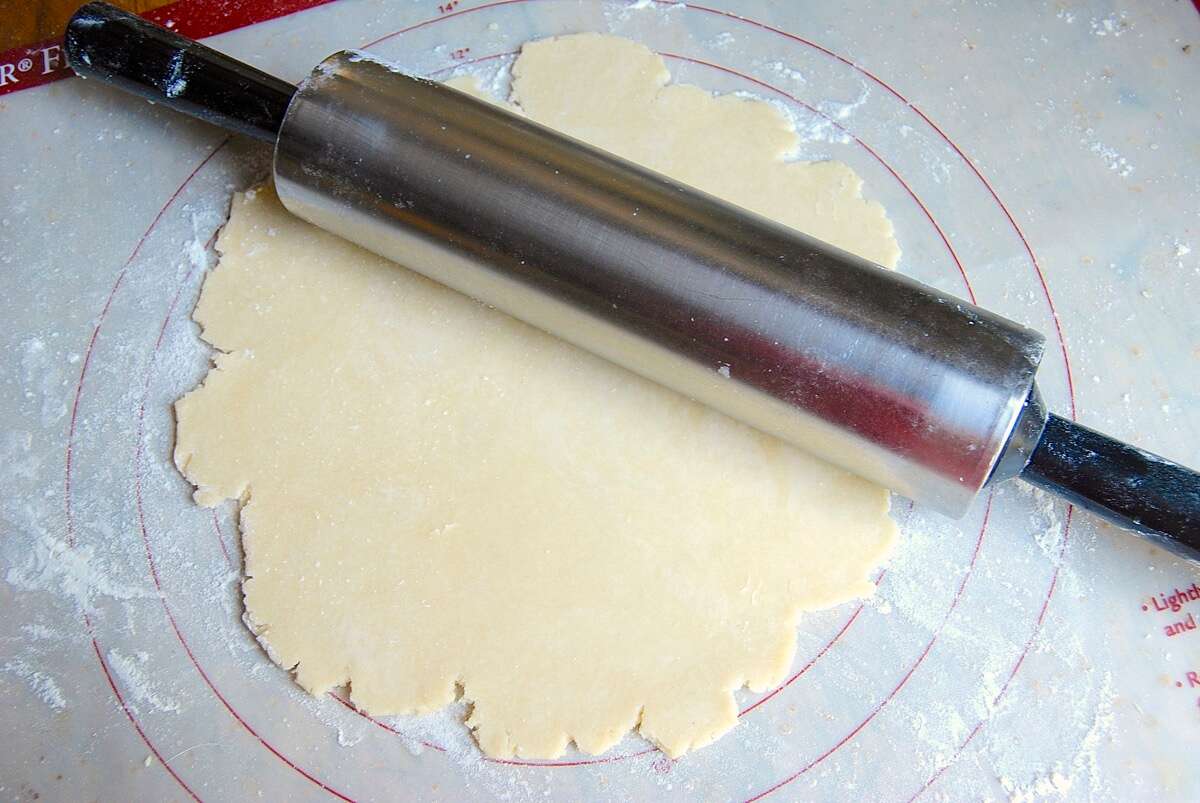 Tips for effective pie-pastry rolling: Use a heavy rolling pin. Start in the center and roll outward, like the rays of the sun. Press down hard, and use as few strokes as possible to roll the pastry into the requisite-size circle. 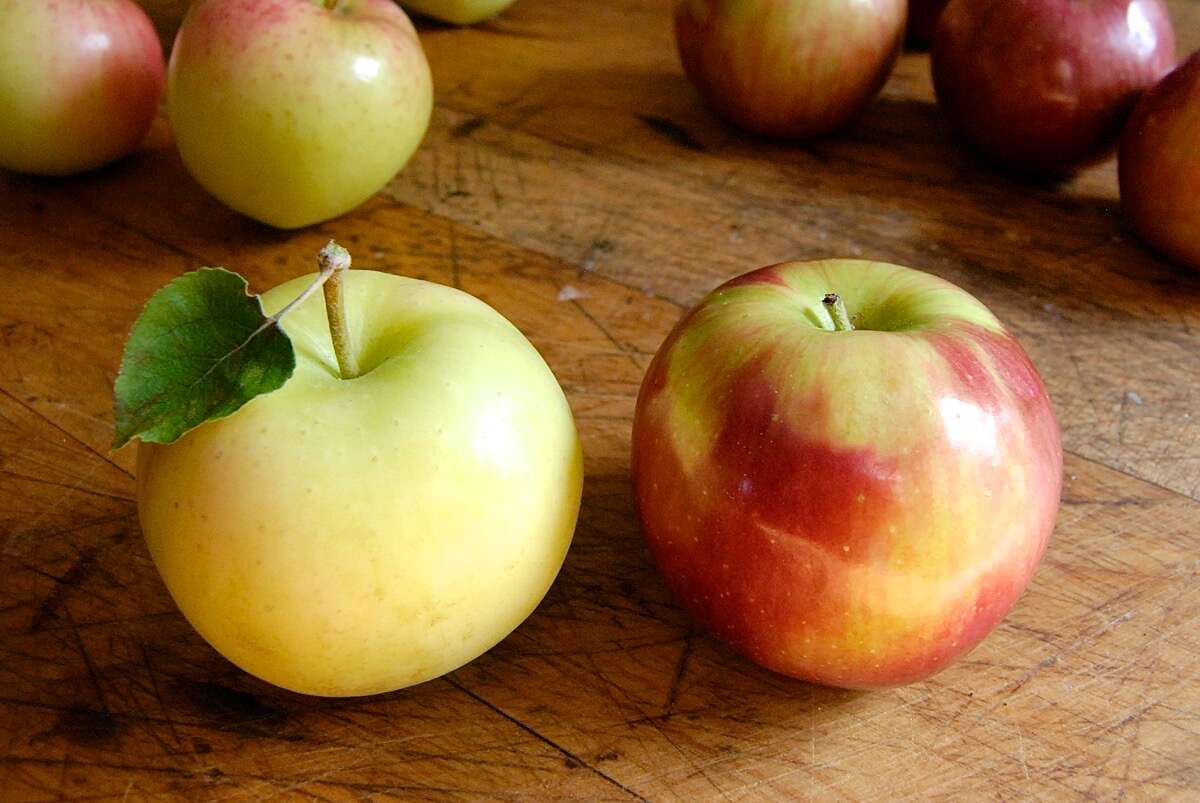 4. Choose apples that hold their shape

Here's a Ginger Gold apple on the left; a McIntosh on the right. McIntosh apples make delicious pie, but boy, do they shrink as they bake! If you can't bear giving up on your Macs, at least mix them with apples that hold their shape better. For further advice on apple selection, read The very best pie apples: how to choose. 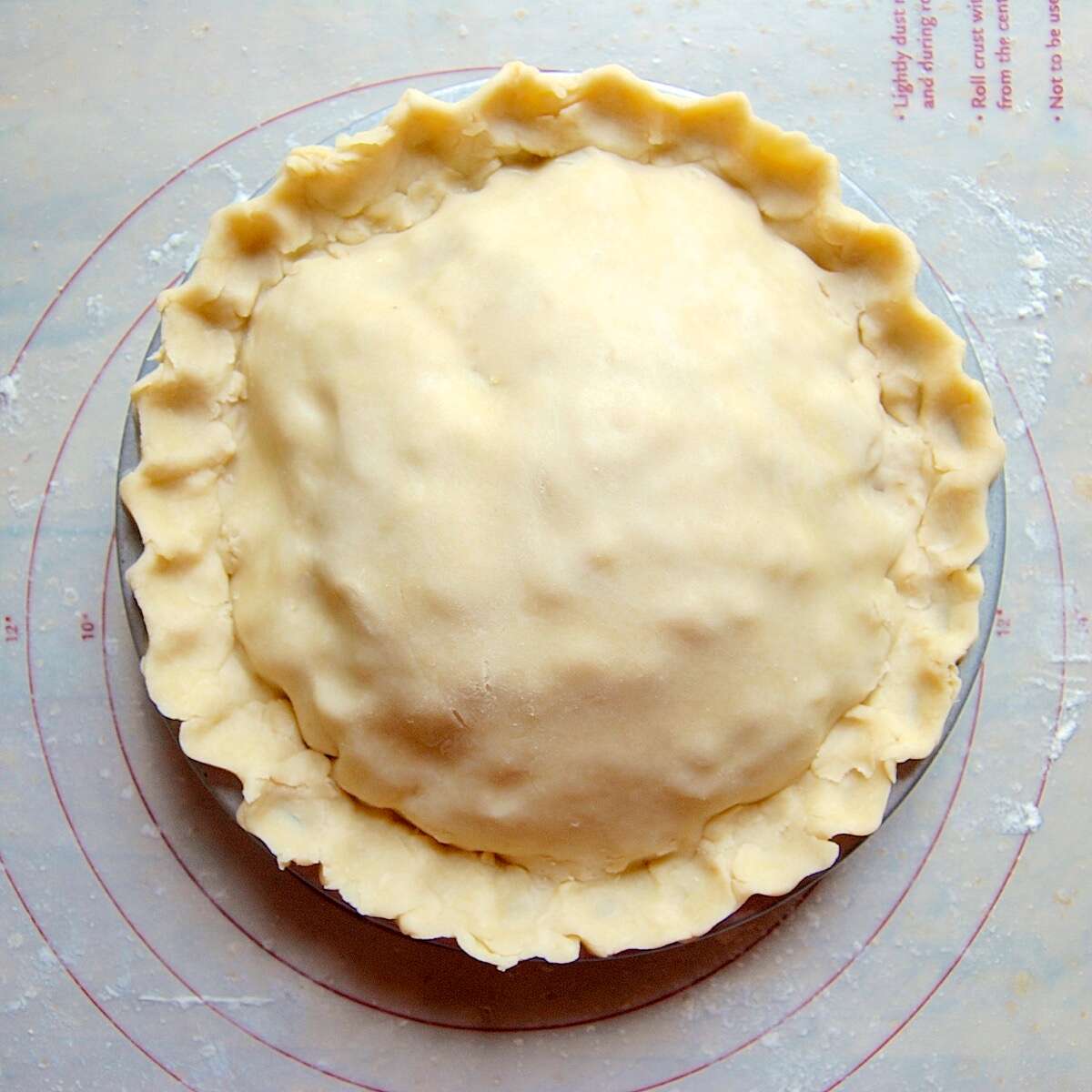 Doesn't this top crust look gorgeous! But wait — something's missing. Remember the steam from the baking apples, and how it'll blow the top crust up like a balloon if it has nowhere to go?

Prick the crust all over with a fork, like you would shortbread; or cut some slashes or crosses. Make a lattice, if you like. But whatever you do, don't bake your fruit pie with a solid, sealed-down top crust: you're just asking for the that "gap in pie" result.

Now that we've learned our lessons, let's make an apple pie whose crust snuggles up to its filling: no gap in this pie. 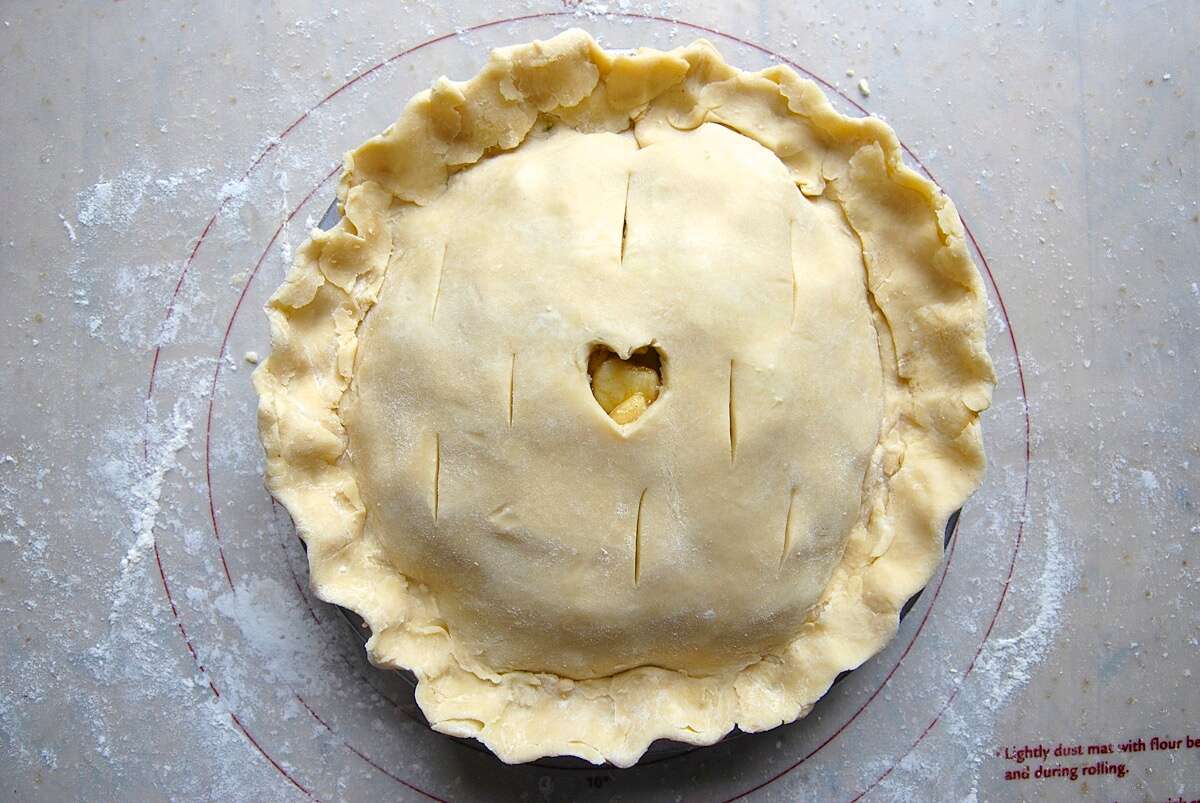 This is an all-butter pie crust, made with a minimal amount of water. The filling is Ginger Gold and Granny Smith apples. Notice how well-vented the top crust is. 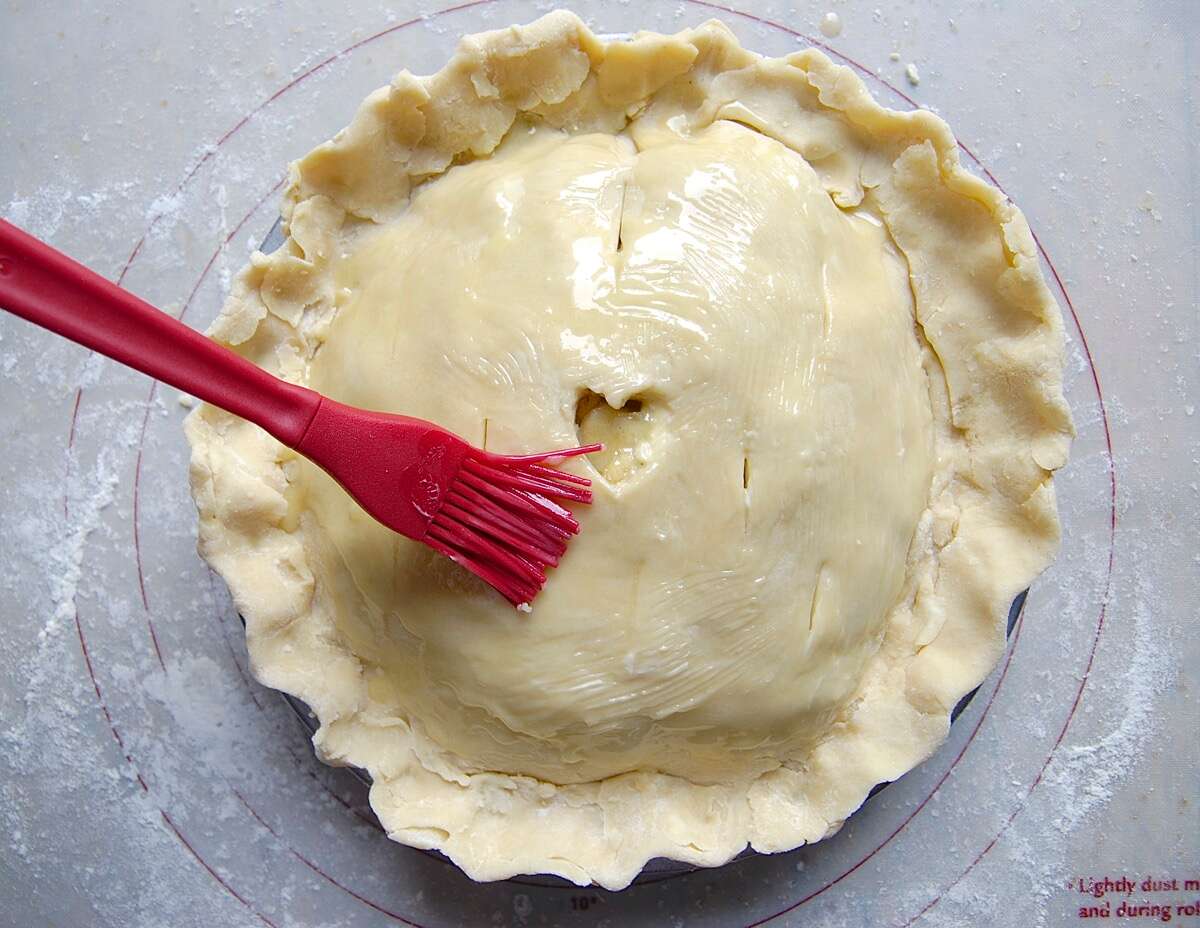 I brush the top crust with melted butter. It probably doesn't make any difference as to whether the gap will appear, but it tastes good, and helps with browning. 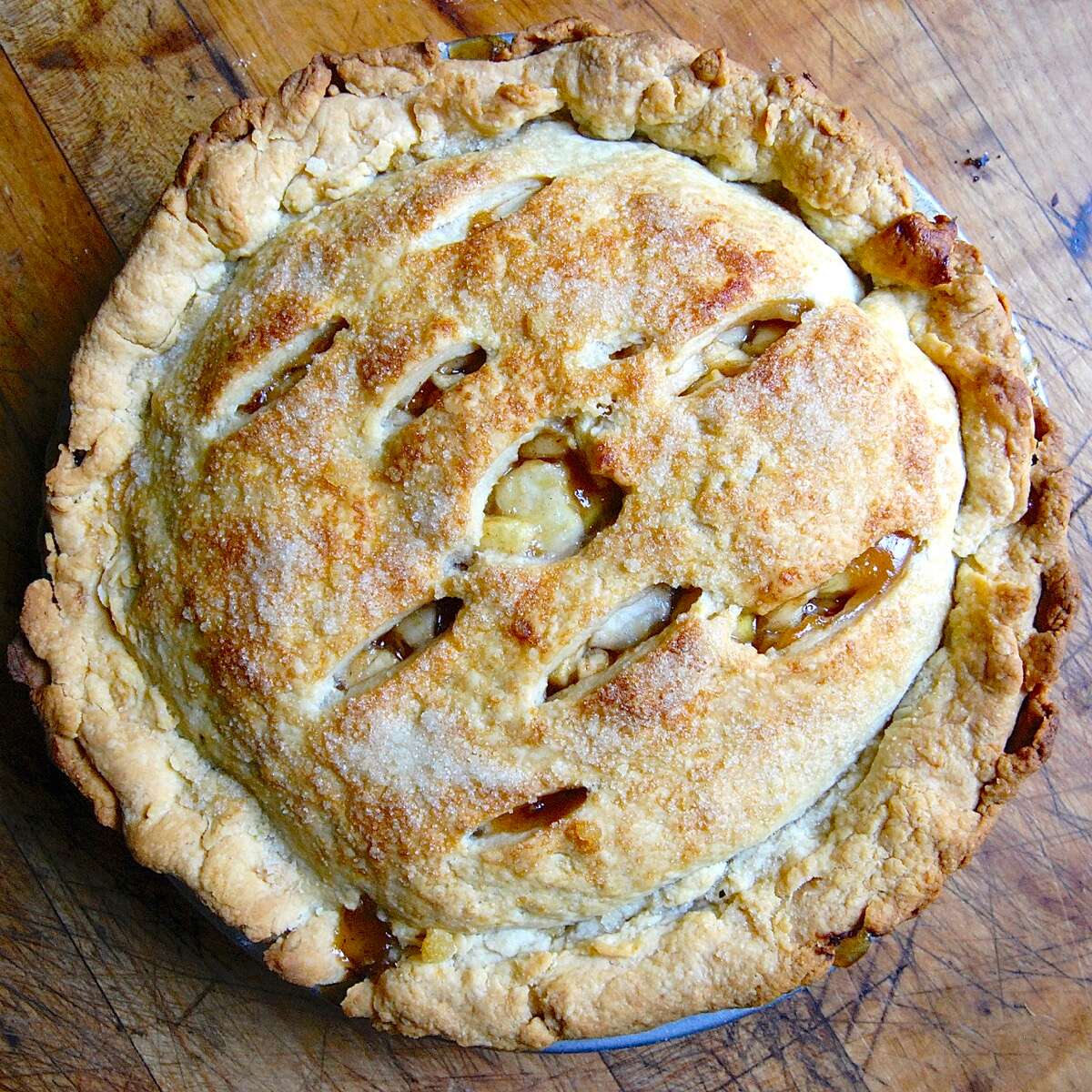 Here's the baked pie. See how those apples inside are nearly flush with the crust? Looks like a winner. 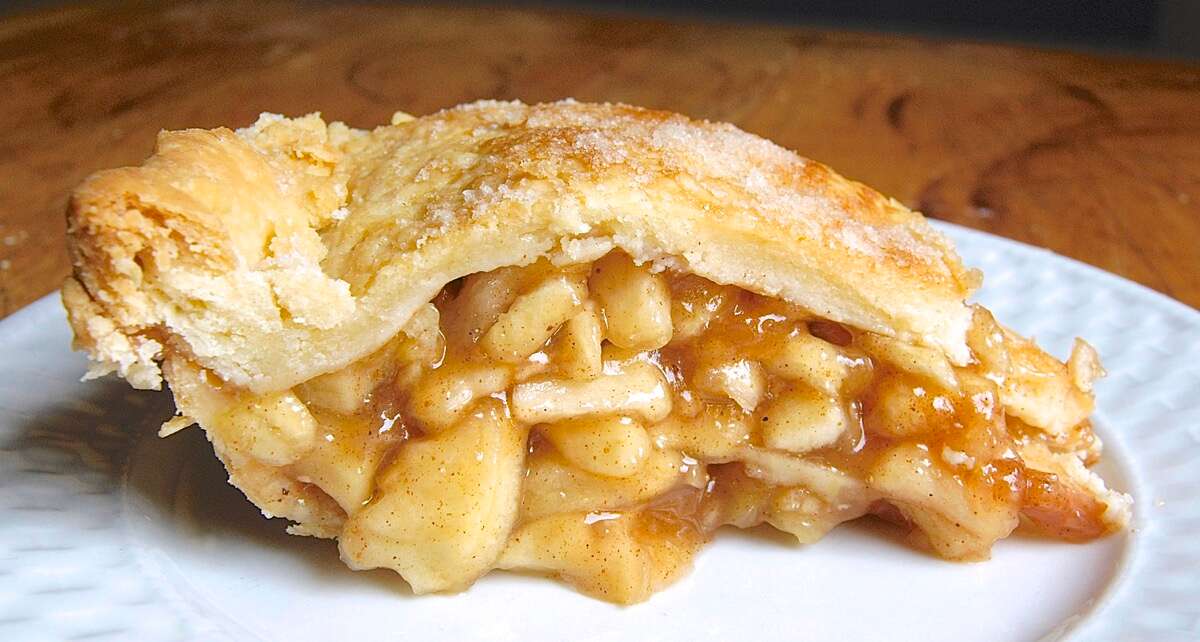 Indeed. The crust follows the contour of the apples very nicely.

But what if you really, REALLY want to make your favorite McIntosh apple pie?

Let's try it, using all of our tips for non-rigid crust. 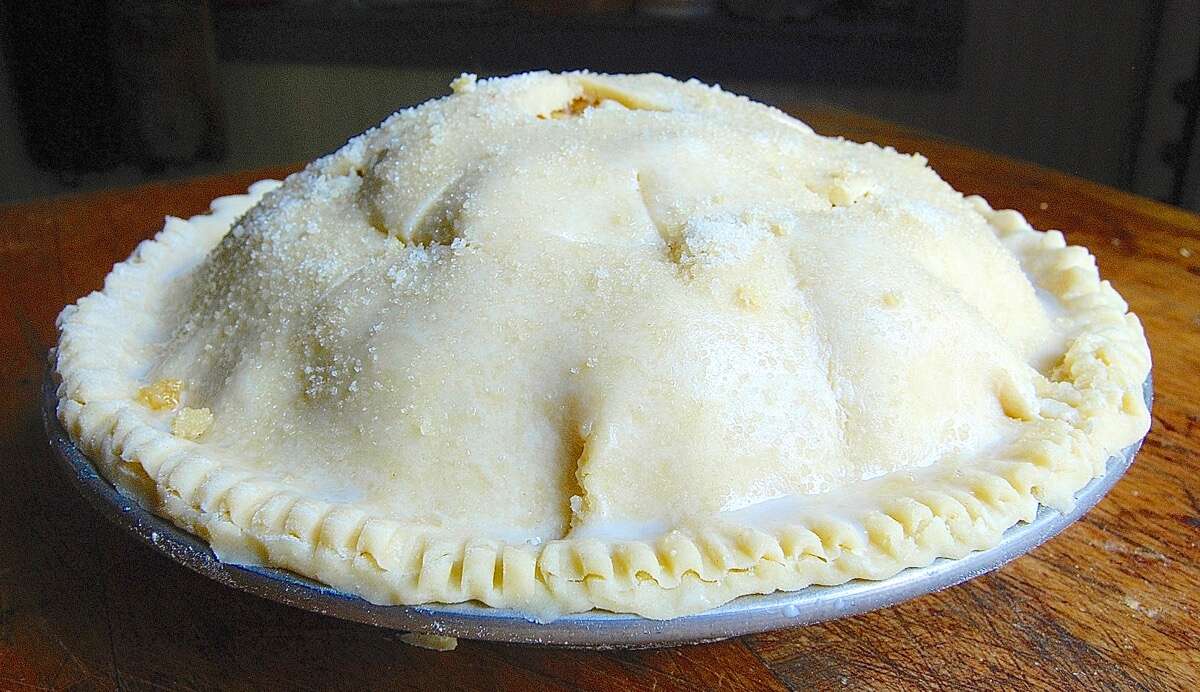 A butter pie crust, made with a minimal amount of water, fully vented. 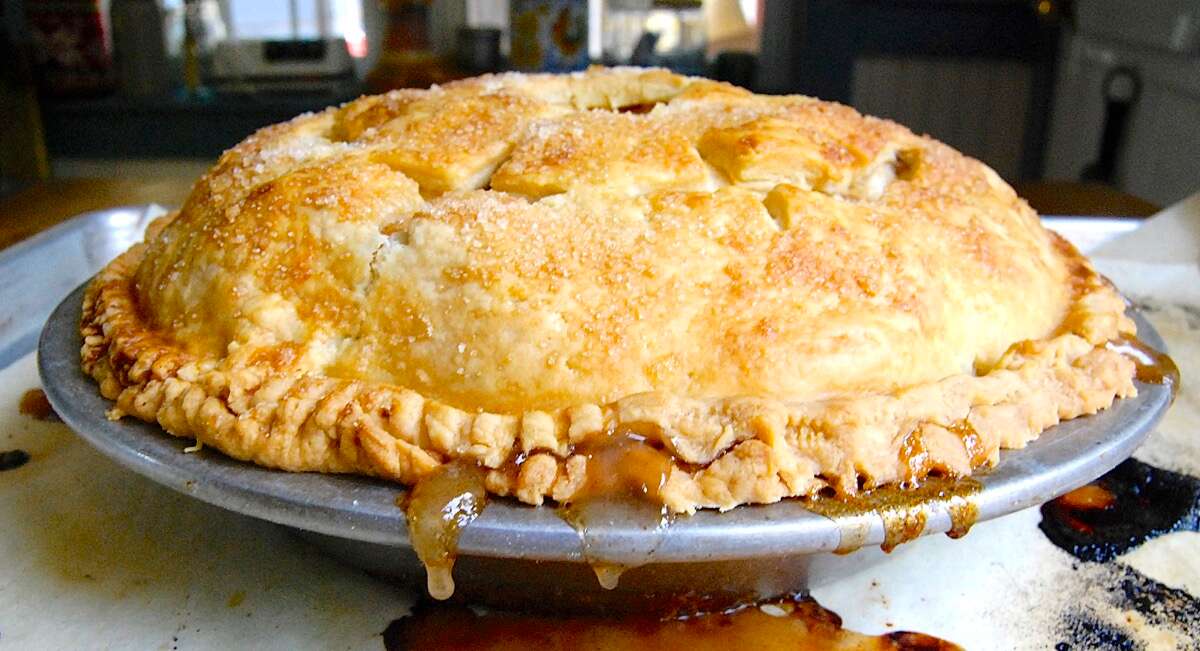 You can see the crust sank some; was it enough to prevent a gap? 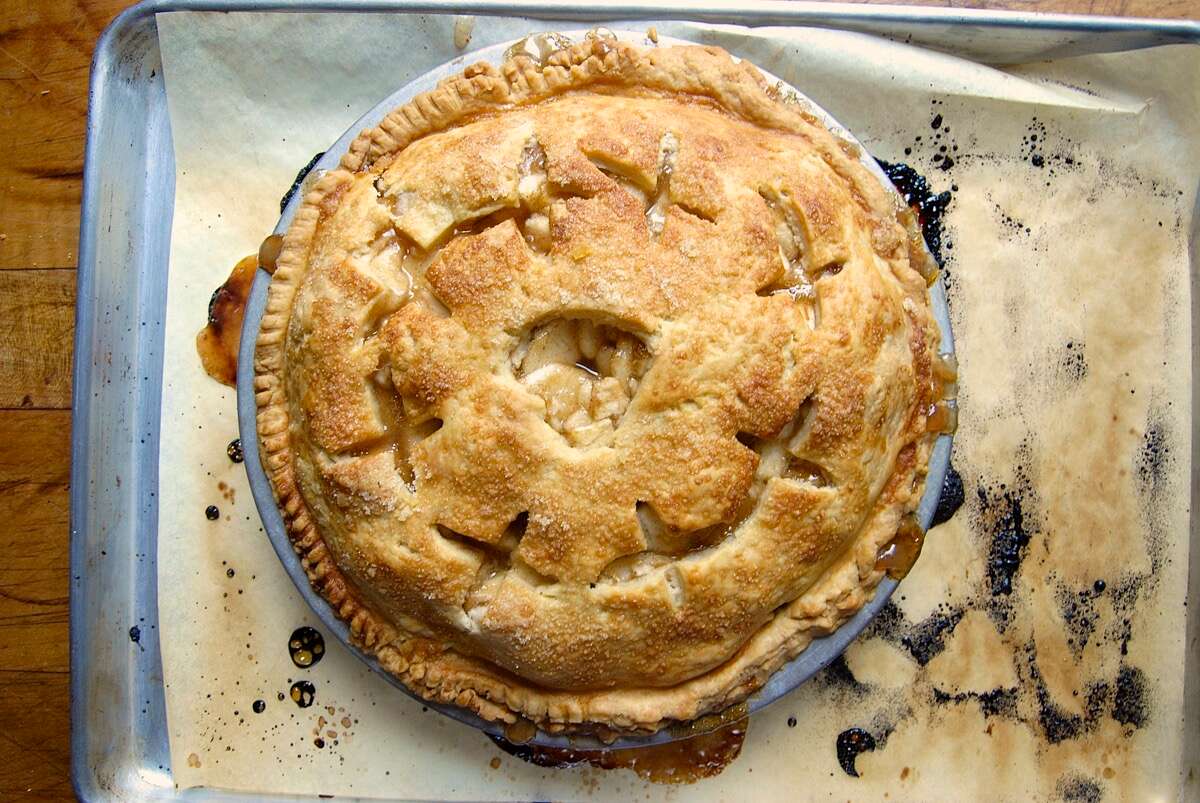 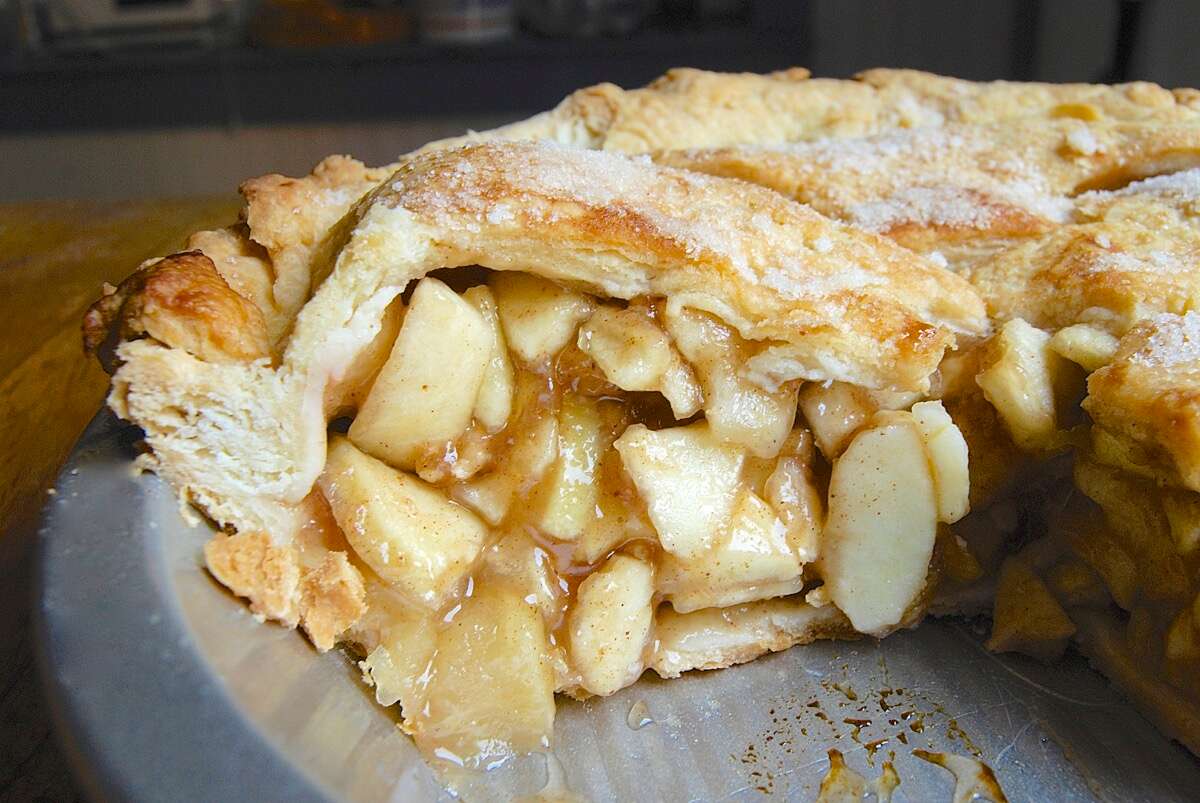 Success! The McIntosh apples shrank as they baked, but the steps I took ensured that the crust would settle down with them.

Avoid that dreaded gap in pie

Mind the gap! For your best shot at a beautifully-baked pie, remember the following:

Here's one more trick to try, especially if you're devoted to your shortening-based crust and McIntosh or Cortland apples: Toss the apples with sugar and thickener until they release some juice, then place in a saucepan.

Cook over medium heat until the apples have released more juice and begun to lose their shape and shrink a little. Spoon the filling into the bottom crust, add the top crust (remember to vent the top) and bake. Hopefully the apples will have settled enough during their time on the stovetop to prevent much further shrinkage — and the resulting gap.

Apple pie season's here! Do you have any special pie tips? Please share in comments, below.

Every time I cut into my homemade apple pie all the apples fall out of the crust. Why does this happen?

Hi Antonia, this may be a sign that your filling is a bit wet. I would recommend increasing your thickening agent (flour, corn starch, clearjel) by 1-2 tsp. Hope this helps!

My crust was a bit gummy in texture when I rolled it out . I put the apples in and top crust and popped it in the freezer like I always do . I’m hoping when I bake it it will turn out good ! Any thoughts ? Can it be fixed ?

Hi Ginny, I'm sorry we weren't able to respond to your question in a more timely fashion, and hope your pie turned out lovely and delicious! If ever you're in need of more immediate assistance, please don't hesitate to contact our Baker's Hotline. We're generally here M-F from 9am-9pm EST, and Saturday and Sunday from 9am-5pm EST (extended to 7pm during the holiday season). You can call us at 855-371-BAKE (2253), or contact us via CHAT. One thing that might help with a gummy crust is adding a little "Crust Dust" before baking. While this is meant to prevent moisture from soaking into the crust, I would think it might work the other way as well!

Make chunky apple bread instead! Lasts longer and you can schmeer (technical term!) on butter or better yet soften cream cheese. lots of good recipes out there...

People want their apple pie. Apple bread?? No thanks

I have always mixed apples in my pies there is always a few Granny Smith and some Galas’s. I also have always used just lard or crisco sometimes there is a gap sometimes not. I was worried the crust would be greasy if I used all butt. Sometimes I did use some butter those didn’t turn it so good. I will try this all butter recipe but the problem I have is there is so much juice in the bottom. Once I coat the apples with seasoning and mix in corn starch they sit and I remove them from the bowl leaving the juice behind in the bowl. Are there certain apples not good for a pie because they are too soft or juicy? My apple selection in my area are limited.

We hope the tips in this blog article help you eliminate that pie gap! Some apples are softer and produce more juice, for some suggestions on apples that do well in pies we'd recommend checking out our blog article The very best pie apples. You might also find that it helps to precook your apple filling too, check out our How to prevent runny apple pie post for details on this. We hope this helps for future pie adventures!

How beautiful they are! I never knew excess rolling would toughen, but I should have realized it. Thanks for pointing it out.

I’ve never had the “gap” in my apple pie! Early in my marriage I started using a Dutch crumb crust and over 55 years later it is the only way my family likes apple pie. I use butter, but mostly lard (gasp!) like my Granny Hunn did for the crust. She was the best baker ever! Somehow I think lard isn’t too bad for you. Shortening has trans fats..