We're thrilled chef Nico Albert, a member of Cherokee Nation, has shared her recipe for Modern Masa Cherokee Bean Bread, a dumpling-like corn-and-bean bread, with us. Made with masa harina, this beloved recipe is part of the powerful tradition of corn in Native cuisine, the story of which Nico tells below.

These are just a few names given to one figure who plays an integral role in the creation stories of Indigenous peoples all over Turtle Island (North America). There are as many names for her as there are Turtle Island tribes — hundreds — but they all refer in some way to the Corn Mother. She is the giver of life, whose gift of the sacred plant maize has sustained our people from the beginning of time to present day.

The possibilities of this gift are endless; from grilled sweet corn fresh off the cob to the culinary marvel that is masa, our people have placed corn at the center of our dinner tables for generations. Today, using an ingredient like masa harina in recipes, such as Cherokee Bean Bread (tuya asuyi gadu), is a convenient way for people to cook and bake with corn, carrying on the long tradition of this sacred food.

One of corn’s many legends

In the language of my people, the Cherokee, selu is the word for maize, but Selu is also the name of a beloved ancestor: the First Woman, married to Kana’ti (the Lucky Hunter) and mother to two mischievous boys. She’s also the reason we have corn.

As the legend goes, one day her boys began to wonder where their mother got their food. They followed Selu to a nearby grain house and spied on her, where they watched as she moved her hands over her belly to make ripe ears of corn appear. Once back home, Selu told them she knew they had witnessed her secret, and now they would have to kill her. But if they followed her specific instructions, they would never go hungry, even after she was gone. She directed them to clear a large patch of land, drag her body seven times in a circle around the outside of the clearing, then seven times across the inside the clearing. She then told the boys to stay up all night and watch, and by morning they would have plenty of corn.

Selu’s sons followed her instructions — but not to the letter. Instead of one large space, they cleared seven smaller plots. They dragged Selu’s body around the plots, and everywhere her blood fell, corn plants sprouted. The boys settled in to keep watch all night, but they eventually fell asleep. When they awoke, they found the sprouts had grown only slightly taller, and the corn was not yet ripe. It is for these reasons that to this day, corn only grows in certain places, and we must tend to it over many months before it is ready to harvest.

Though the stories of corn’s origin differ among tribes, there’s often one common theme: a mother’s sacrifice for her children. This sacrifice created a sacred relationship between our people and this plant that we cherish to this day. From the deep purple, almost black of Incan Kulli Corn to the rosy garnet of Osage Red Corn, the speckled sky blue Diné Robin's Egg Corn, and the painterly design of Pawnee Eagle Corn (creamy white with a dark blue eagle, wings outspread), corn contains the stories of its people, and the vital nutrients to fuel their continuation.

On top of the advanced agricultural technology our ancestors developed to domesticate and design many varieties of maize, they also invented a method to unlock nutrients trapped within the hard protective hull of the seed: a process called nixtamalization. Our ancestors simmered dry flint corn kernels in water with hardwood ash. The alkali from the ash reacted with the corn’s outer hull, softening it so it could be slipped off the kernel during the rinsing process. This exposed the starchy inner grain known as hominy or pozole, which could then be used for all kinds of culinary purposes.

This nixtamalization process (also known as hulling or lyeing) develops the aroma and flavor of corn, eliminates potential toxins, adds calcium, and releases nutrients for our bodies to absorb. These chemical changes also enable hominy to be ground up and form a dough known as masa. This fresh masa can then be dried to make masa harina (which directly translates as “dough flour” — flour made from hominy dough). Masa harina is basically the instant just-add-water version of the dough made from freshly ground hominy corn!

Corn-based recipes unite us across the continent

One of the most beautiful ways this ancient grain connects us across Turtle Island is through the recipes we’ve created to share with our families, and the way those recipes intersect and overlap as they travel from one community to the next. The tamales of the Aztec and Mayan cultures bear a striking resemblance to the bean bread (tuya asuyi gadu) of my Cherokee ancestors, the banaha of the Choctaw and Chickasaw people, and Kneel Down Bread (Ntsidigo'í) of the Diné.

We all make versions of a stew featuring tender meat simmered in a broth studded with chewy hominy kernels, just like the familiar Mexican dish pozole. There are masa dumplings simmered in aromatic pots of beans, and corn pone, like fat tortillas or sopes, used as tasty edible spoons to scoop up the last bits of food on our plates. These dishes connect us to one another, as the Indigenous people of Turtle Island, the people who received the gift of maize from our Corn Mother, and who continue to share her story at our tables.

Tuya asuyi gadu, or bean bread, was a staple dish on the dinner tables of Cherokee people for centuries before the introduction of European ingredients like wheat. More like a dumpling than a bread, the traditional recipe was prepared by adding beans and hot broth to freshly ground nixtamalized corn to make a bean-studded masa-like dough, which was then wrapped in fresh or dried corn leaves and boiled. Because of the labor-intensive nature of the original preparation, bean bread is not as common today. By incorporating a modern innovation like masa harina into our traditional recipe, we are able to make this delicious dish more accessible to our people, and bring it back to our tables as a reminder of our connection to our Corn Mother, Selu.

Try Nico's recipe for Modern Masa Cherokee Bean Bread, and let us know how it goes in the comments, below. 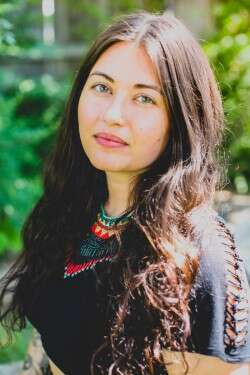 View all by Nico Albert

Thanks for sharing the nice Blog!

Thank you for recognizing the food sovereignty of indigenous people. Miigwech from the homeland of the Ojibwe.

I found this article most interesting as i am part Cherokee back several generations on my mother's side. Proud of my heritage. Will be trying this bread soon.

What a joy to be able to connect with a part of your family's history through baking!

Out of my home until March due to a flood and surgery for total hip in Feb. plan on baking and getting into my new kitchen when all is done. Love King Arthur.

So glad that we can be a beacon of light for you Barbara! Wishing you a speedy recovery and a kitchen full of love and yummy smells.

This was a very interesting, and enlightening post. My great-grandmother, on my mother's side, is half Native American and half black. My grandmother inherited strong Native American genes, as she'd often be asked what "tribe she belonged" when she'd be out and about running errands. I never knew what tribe my heritage includes, but I think it's Cherokee blood that I have in me, since they are the tribe that populated southern states, such as South Carolina. Newberry, South Carolina is where my grandmother comes from and where she was born.

I'm an experienced cook and baker, but I don't have any Native American recipes in my recipe collection, so thank you for sharing this recipe along with the history of maize in Native American culture and cuisine. I'm definitely going to give this a try.

Hi Darlita, we're so glad to hear you found this post helpful and enlightening!