A closer look at tangzhong

The secret to our Perfectly Pillowy Cinnamon Rolls

Psst … have you heard? We recently announced our 2021 Recipe of the Year: Perfectly Pillowy Cinnamon Rolls. There are a lot of reasons to love these sweet, yeasted spirals — a robust cinnamon filling, rich icing, hearty size …

But their true standout quality? A super-soft, fluffy texture that stays that way for days.

We incorporated a lot of tricks and techniques into this recipe from start to finish in order to create the most pillowy roll imaginable. (You can read about all of them in our blog post, Introducing our 2021 Recipe of the Year.) But one of the biggest reasons these rolls have such a long-lasting softness? The tangzhong method.

What is the tangzhong method?

In short, the tangzhong method involves cooking a small amount of the recipe’s flour and liquid to form a thick slurry, which is then mixed with the rest of the ingredients to make a basic bread dough.

This process pre-gelatinizes the starches in the flour, and as a result they can absorb more liquid. The result? More moisture in the dough, which translates to a softer texture in the baked bread and a longer shelf life.

With origins in Japan's yukone (or yudane), tangzhong is a yeast bread technique popularized across Asia by Taiwanese cookbook author Yvonne Chen in her book 65º C Bread Doctor. The technique is best known for giving Japanese Milk Bread its signature feathery soft texture. As a result, tangzhong is closely associated with this style of bread, versions of which can be found in convenience stores, grocery stores, and bakeries across Japan and elsewhere in Asia.

In recent years, Japanese Milk Bread, and by extension tangzhong, have become popular in American baking. As more bakers in the States have become familiar with the technique, it’s expanded to be used in any style of bread designed to be soft and tender.

As mentioned, tangzhong is effective because it pre-gelatinizes the starches in the flour. But you might be wondering … what exactly does that mean?

Essentially, flour contains starch granules, which are hard when raw. As the granules are heated, however, water is attracted to the molecules within the starch granules. This causes the granules to swell and soften, absorbing and trapping water as they do so. In fact, the flour absorbs twice as much hot liquid as cold liquid, which is why the heating process is essential.

As the granules swell, the flour-water mixture noticeably thickens, transforming into a gel-like texture.

The ideal temperature for this process is 65°C/149°F. That said, there’s no need to bust out a thermometer while using the tangzhong method, unless you want to. You can easily judge this gelatinization process by observing how the flour and liquid thicken as they simmer, becoming opaque and paste-like.

Because of tangzhong, breads also have a longer shelf life, since the pre-cooking enables the starch to retain more moisture for longer periods of time. That’s why Perfectly Pillowy Cinnamon Rolls stay appealingly soft for days, rather than hours. Which means you can bake them up the night before, then enjoy them in the morning just as fluffy and tender as ever.

Yudane is another technique used to make soft yeast bread, like tangzhong but slightly different. These similar methods both add tenderness and moisture to bread by gelatinizing the starches in flour with hot liquid. But though the terms are occasionally used interchangeably, they’re separate techniques with differences in execution.

Yudane (a Japanese term) involves pouring boiling water over the flour and stirring, essentially scalding the flour. The ratio of flour to liquid is typically 1:1 by weight.

Meanwhile tangzhong (a Chinese term) has you cook the flour and liquid together on a stovetop to form a paste, which is mixed into the bread dough. In this technique, the ratio of flour to liquid is typically 1:5 by weight, though this isn’t absolute.

Most recipes that use tangzhong will call for either water or milk to be cooked with the flour. Our Perfectly Pillowy Cinnamon Rolls recipe, for example, uses milk to make the tangzhong.

If you’re baking dairy-free, we’re happy to share that alternative milks — such as almond milk, soy milk, and oat milk — work perfectly to make tangzhong. Simply substitute 1:1 for the milk called for in the recipe, no other changes needed.

While tangzhong is usually described as cooking the flour and liquid together on the stovetop, it can just as easily be made in the microwave.

To do so, simply mix the flour and liquid together in a microwave-safe bowl. (Make sure the bowl is large enough to accommodate the mixture bubbling up.) Heat at 20-second intervals, stopping to whisk in between to keep the mixture smooth, until it's become stiff and paste-like. This usually takes me about 1 minute total, but will vary depending on your microwave’s strength.

Inspired by this longstanding baking technique, we’ve been using tangzhong for years to make fluffy dinner rolls, tender sandwich loaves, and more. So when our test kitchen decided to dream up a cinnamon roll with the softest texture possible and a long shelf life, tangzhong quickly became a starting point for the recipe.

But we didn’t stop by just adding tangzhong. Our test kitchen made some additional tweaks to make this Recipe of the Year truly standout. So how do Perfectly Pillowy Cinnamon Rolls differ from our other tangzhong recipes?

For one, the ratio of tangzhong to dough. The cinnamon rolls cook 7% of the recipe’s total flour in the tangzhong. Other King Arthur recipes using tangzhong cook a smaller percentage of the flour. These include Japanese Milk Bread (4.4% total flour) and Soft Cinnamon Rolls (5.3% total flour). The higher percentage means more of the flour is pre-gelatinized, bumping up the overall moisture retention in those pillowy cinnamon rolls.

In addition, Perfectly Pillowy Cinnamon Rolls use milk as the only liquid in the tangzhong. This is different from other recipes on our site, many of which use a combination of milk and water. The whole milk adds even more tenderness and richness to the dough, yielding a softer roll.

Still not convinced by the power of tangzhong? Let’s bake up a little cinnamon roll showdown pitting Perfectly Pillowy Cinnamon Rolls against a version of the recipe made without tangzhong to see how much of a difference this one step makes.

As you can likely see from the picture above, there wasn't a huge difference between the tangzhong and non-tangzhong rolls when they first emerged from the oven. Served warm, they were both soft and tender, although the rolls made with tangzhong were slightly more fluffy, with a feathery texture not entirely matched by the non-tangzhong version.

The real difference, however, quickly emerged. Although both rolls were soft while freshly baked, the non-tangzhong version grew hard and dry much quicker than the rolls made with tangzhong. By the next day, they had already lost a lot of their enticing texture. Re-heating helped, but it didn't return them to their former glory.

The tangzhong rolls, however, stayed soft for several days after baking, retaining their pillowy texture. Upon reheating, they were basically fresh-baked all over again.

Because of tangzhong, Perfectly Pillowy Cinnamon Rolls truly go from good to great. Not only do they have an enticingly soft texture that will have you dreaming of feather beds and cumulus clouds … they stay just as pillowy long after baking.

Now that’s something worth celebrating all year.

Ready to bake? Try out our 2021 Recipe of the Year, Perfectly Pillowy Cinnamon Rolls, and let us know what you think in the comments below! 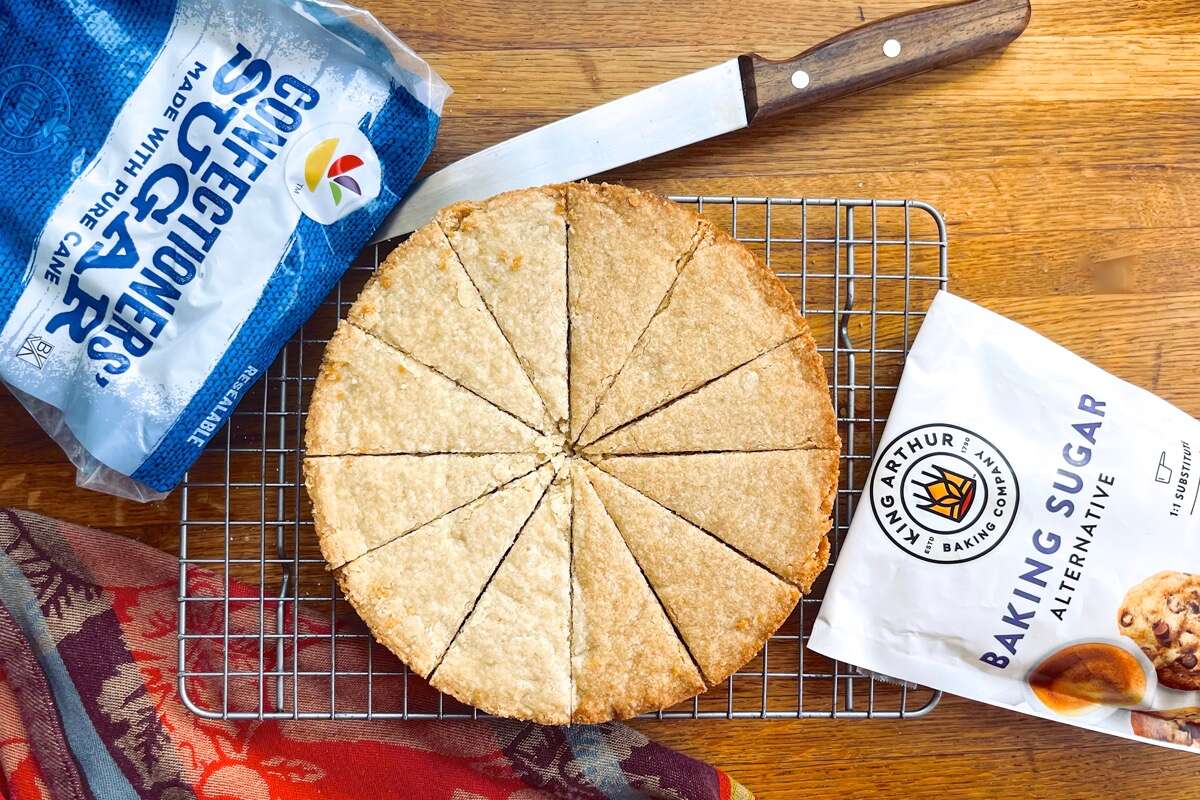 These tangzhong method cinnamon rolls were the best I've ever made...could have eaten all 8 of them in one day. I come from a long family history of cinnamon roll bakers and I've carried on that tradition since I was a young woman. So excited I've found this new recipe on the KAF blog.

After looking for a really good sweet roll from the store bakeries, I tried this recipe, and they are the bomb!!!! Do you think you can double the recipe?

We're glad to hear that you enjoyed this recipe, Nancy! You certainly can double the recipe. Happy baking!

I tried to double my first batch. Noticed my Kit. Aid mixer was smoking. So I hand needed for 25 minutes. Not good. The rolls were "Bride's or Groom's Buns". The were actually hard on the tops, even with hot butter the were hard. Was so sad after hearing how well a tangzoghn

Hi Kit, it sounds like you may have had a bit too much flour in the mix. That is especially common when doubling a recipe and not using scale. One recipe with a little extra flour may not be so bad but when you double it and have twice as much extra flour, it can be quite noticeable. If you don't have a scale, we suggest using the fluff, sprinkle and sweep method to measure your flour. It also sounds like your mixer may be a bit small for this doubles recipe.

Could this method be used for sourdough bread?

Hi there, Dod! You certainly can add a tangzhong starter in a sourdough recipe, but because sourdough has its own keeping qualities, we found that it didn't really make much of a difference. You can read more about what we tested in our Tangzhong in sourdough bread blog article. We hope this helps and happy baking!

Microwave tangzhong? OK, I've got to try this. Have you made a 100% whole wheat (even white wheat) bread with this method?

We have used the tangzhong technique in whole wheat bread, Sheila! Check out our Tangzhong beyond white bread blog article for the details. Happy baking!