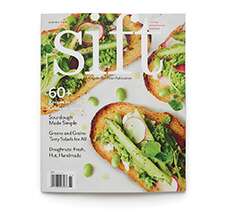 Father's Day is coming up, and the Spring issue of Sift magazine includes a story of a dad, his baking, and its power to change a life.

Food writer Emily Teel shares the story of her father's journey from airline pilot to professional baker, and we'd like to share it with you, in her own words. 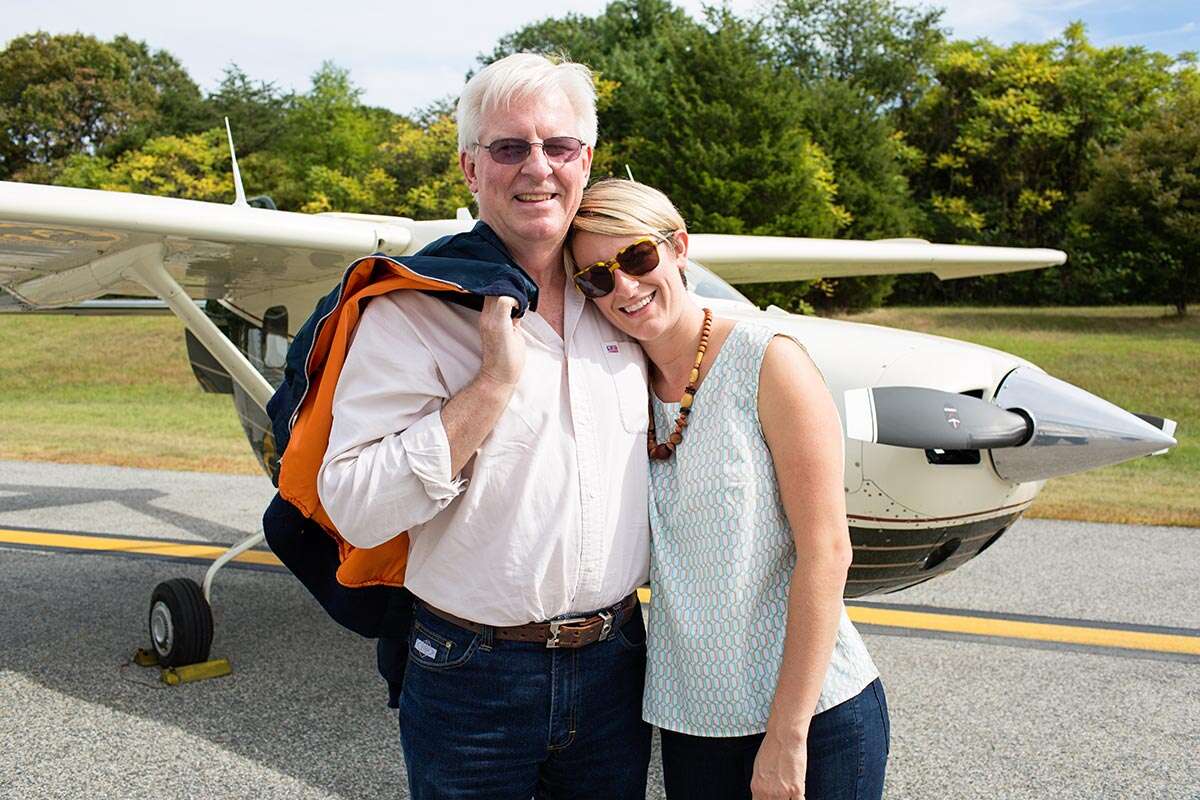 "You want one that crackles outside, but feels soft in the middle," said my dad to 8-year-old me as we stood in the grocery store aisle. Elbow-deep in the basket of paper-wrapped baguettes, I imitated the way he squeezed them to feel for that pleasant, soft crackle. It's a test I still employ today, even in grocery stores where I know the baguette I'm squeezing was baked from my dad's recipe.

Long before he made his living at a bakery, good bread was important to my father, Rod. Back then and for 22 years, he flew commercial airplanes. A commanding figure in his navy blue pilot's uniform, he's tall, with a strong nose, and always a full head of hair—a white-blond color he refers to as champagne. I'm his spitting image in chunky glasses and bright lipsticks, down to the aprons we each wear to work several days a week.

I'm quite sure he would have been a pilot forever, except that a decade ago he started experiencing hearing loss and tingling in the side of his face. We learned that he had an acoustic neuroma, a tumor in the space between his brain and his inner ear. Grounded while he underwent radiation treatment, he started baking; or rather, he started baking in earnest. 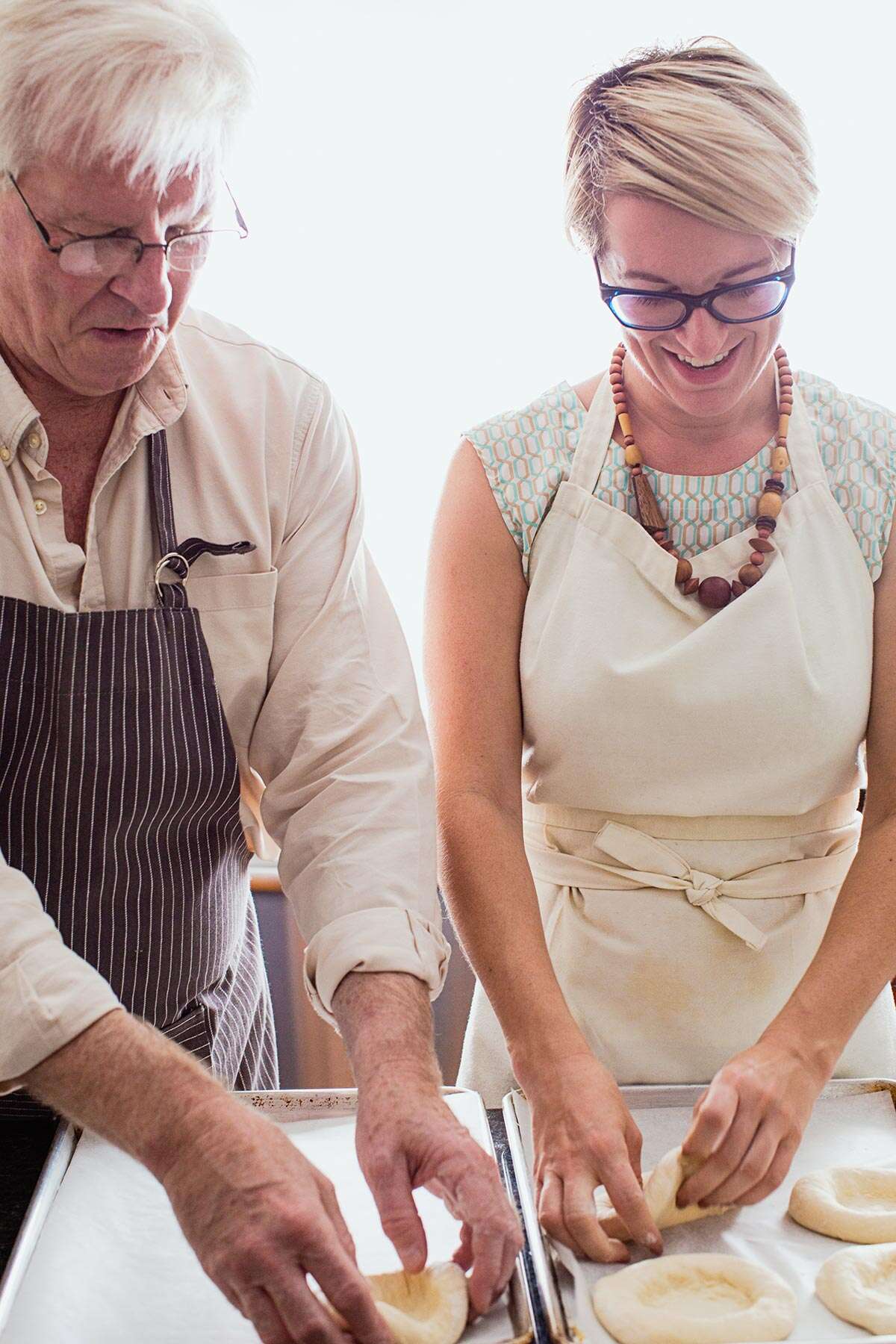 We're a food family, you see. I'm a food writer who grew up in a house steeped in food-loving DIY culture. More than once as a child I stood at the top of the stairs and scolded my parents and their friends for howling too loudly with laughter after my bedtime during an impromptu school-night dinner party. Ours is a family where people make things from scratch – cheese, ice cream, pickles, and pasta sauce – so even before it became his vocation, Dad always baked. (Back when my parents were newlyweds, he made a pizza peel from plywood so they could bake Julia Child's pissaladiere in their home oven.)

Still, even with the baguette squeeze test in his arsenal, good bread was difficult to find back then in Silver Spring, MD, and Dad started experimenting. Ever a reader, he collected every book he could find on artisanal baking, and when he saw a seminar on how to work with wet, European-style doughs, he signed up.

While he recovered, there was one bread in particular that captured my dad's attention, and it was not a bread I grew up eating. Passing through a market in Pennington, NJ, he saw a squat, round bread that looked a little bit like a bagel. It was a bialy, a Polish roll with a center dimple filled with chopped onion and poppy seeds. 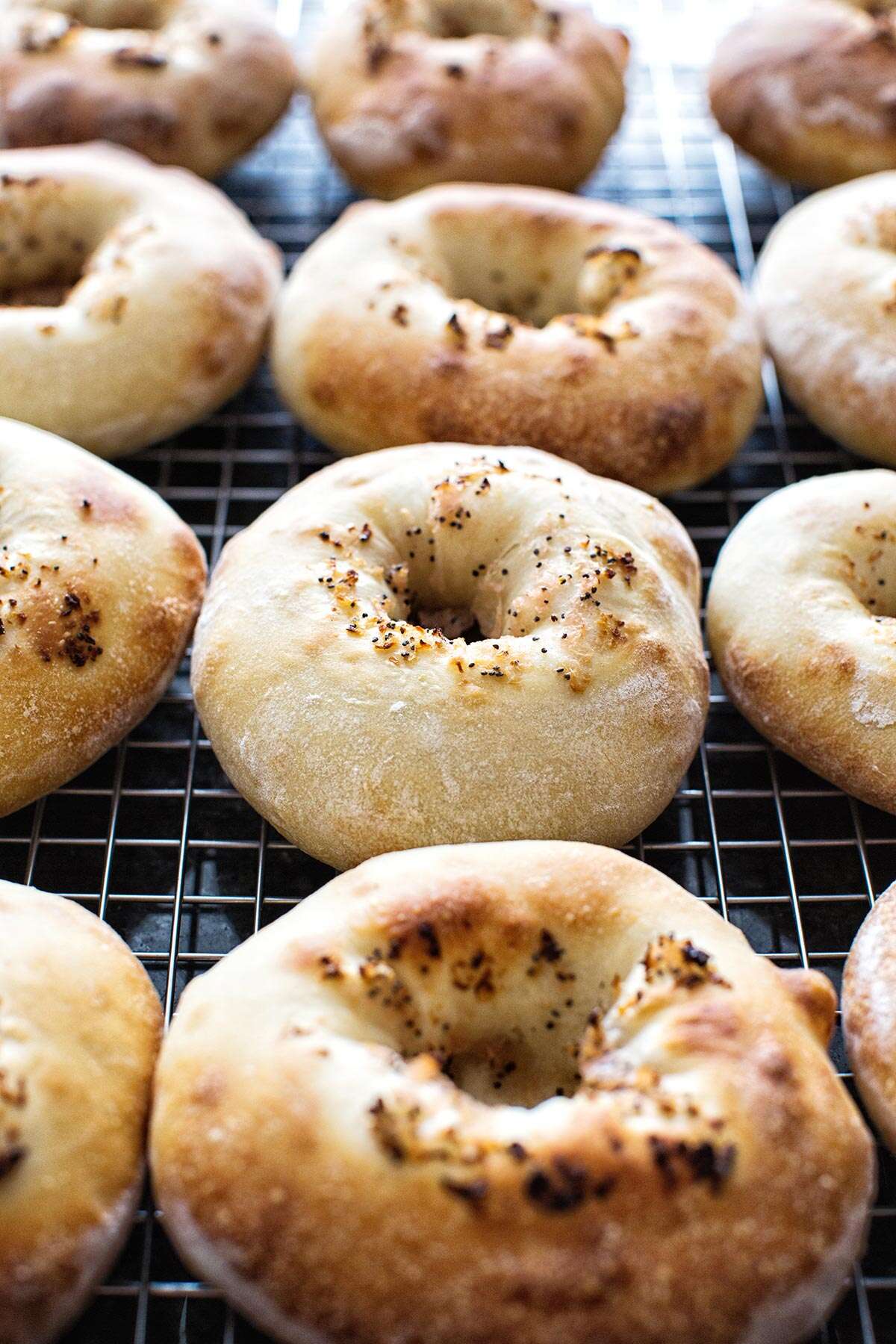 "I had never had one before, and I had no idea what it was. They looked interesting," he remembers. "Frankly, they looked better than they tasted, but I saw that they had potential." 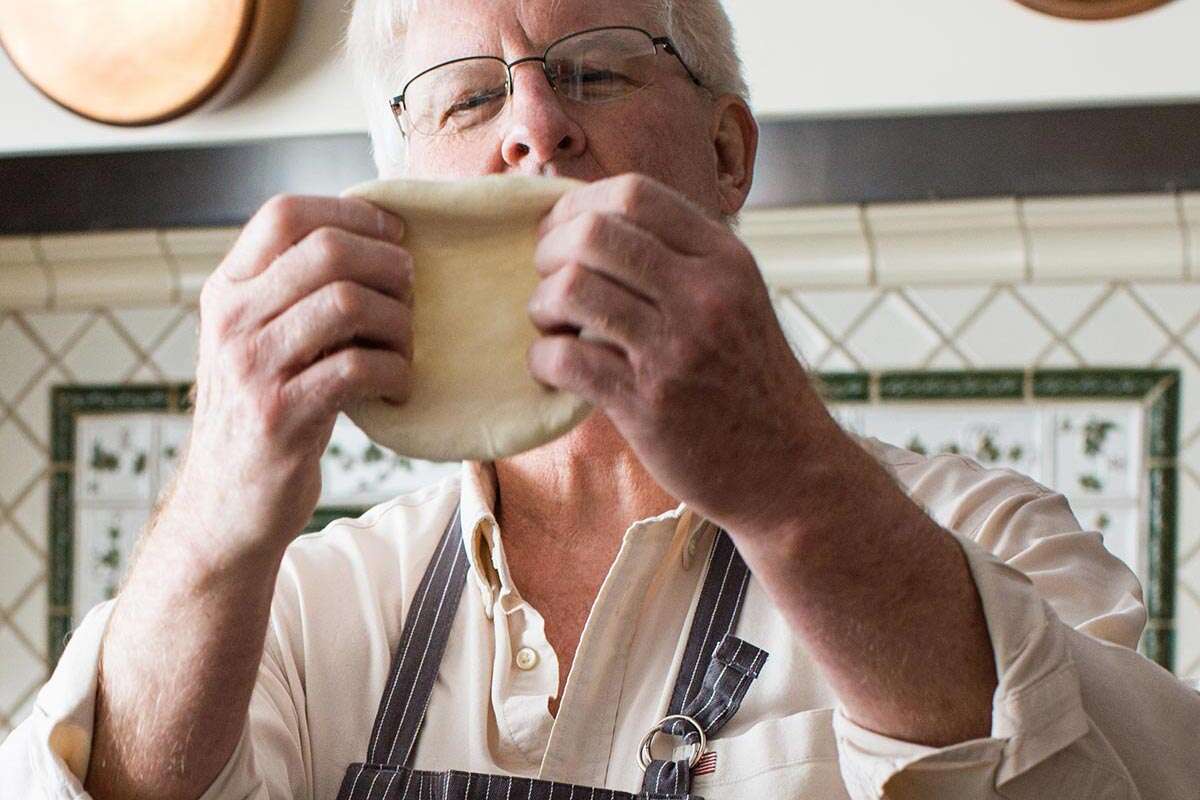 With the rigor that he had formerly used in the cockpit, he started researching bialys, devouring Mimi Sheraton's book The Bialy Eaters, and even planning a trip to Kossar's bakery in New York to taste the gold standard. He was unimpressed, convinced that it could be done better. 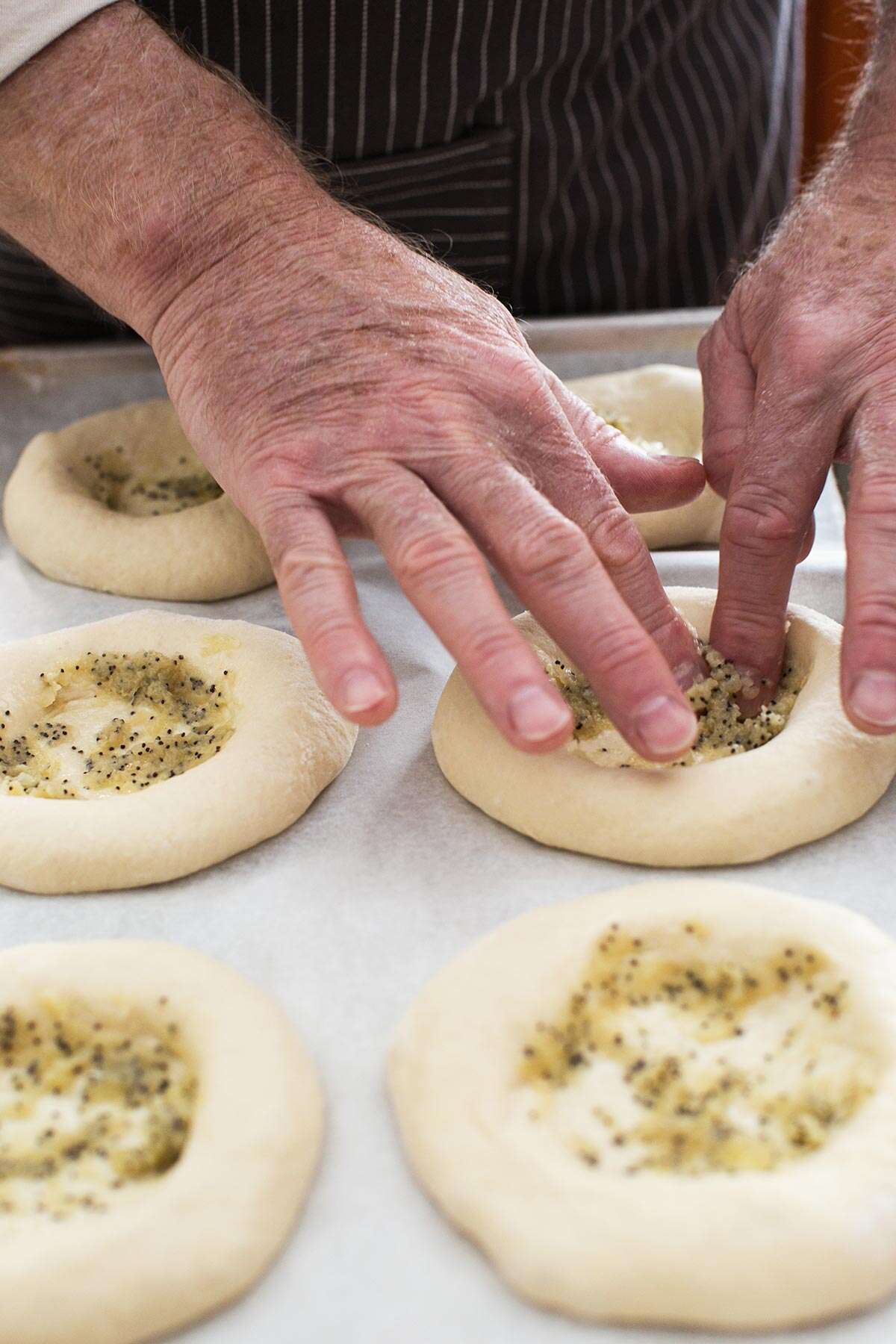 Back at home in Silver Spring, he pulled batch after batch of bialys from the oven as he tweaked and adjusted his recipe. We ate them for breakfast, split and broiled with butter, or spread with cream cheese. There were so many left that he sent my sister and me, recent college graduates, back to our Philadelphia apartments with freezer bags full of them.

Though the radiation treatment was a success and he recovered completely, Dad didn't return to flying commercially. Instead, he traded in his pilot's uniform for a chef coat and started baking even more. He says, "It's very satisfying when someone looks at your bread and says it's beautiful, then loves the taste and experience, too. You feel like you've done something worthwhile."

During his baking explorations, Dad befriended a local bakery owner, David Neville. At the time, David was working to expand his business to include wholesale production for supermarkets, so he was happy for the help – especially when he got a call from Whole Foods Market. They were in search of a new source for the daily baguettes in their stores. Dad dove into the challenge. "A lot of traditional techniques went into it," he remembers. "Poolishes and pre-ferments...anything to develop a good flavor and a light interior structure." Finally, they were satisfied.They named it Artisan Baguette and presented it to Whole Foods.

Now, even though I live 2 hours from my hometown in Maryland, when I want a taste of home I just go to the grocery store, and I can have one of those artisan baguettes. Since their baguette won, Dad has been a full-time bread consultant alongside David. At their bakery (Crest Hill, in Beltsville, MD) they and their team of bakers make handmade breads for supermarkets. 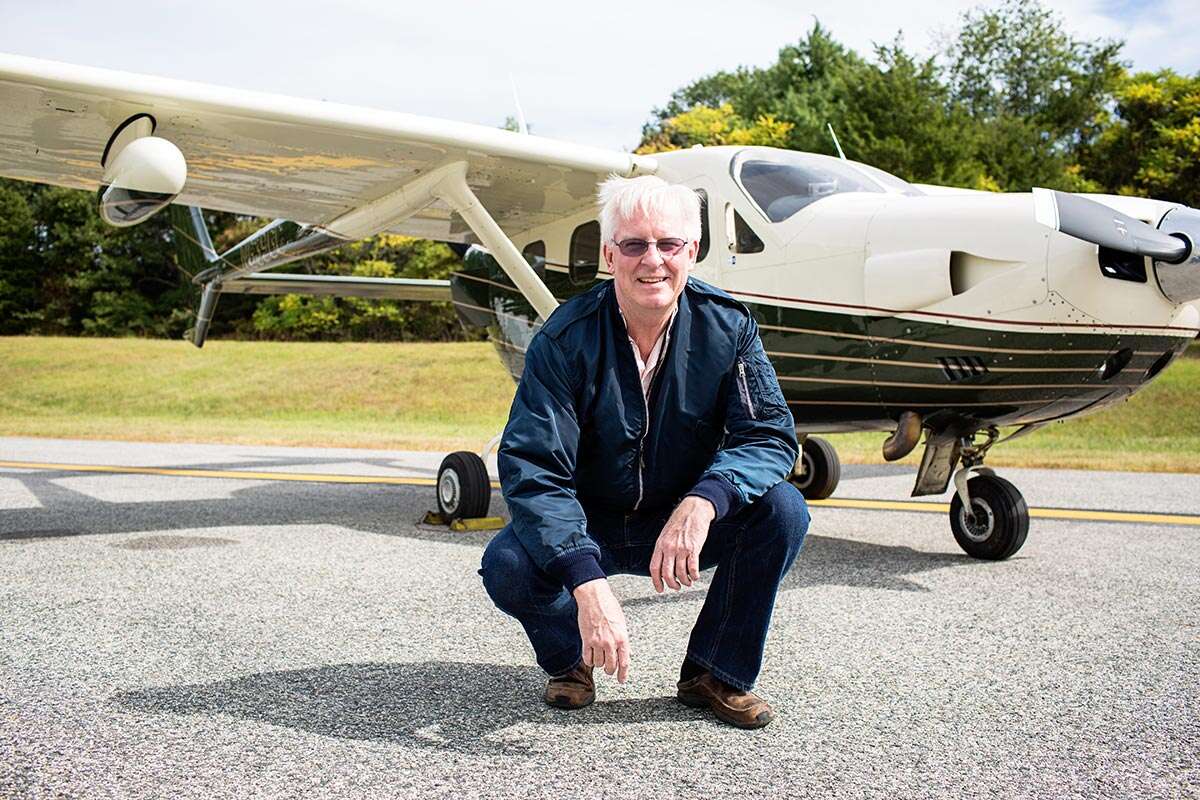 Even though his days now are as much about making sales calls as they are about baking, Dad still gets most excited about the hands-on work of perfecting a new product. "Making things like bialys or a decent boule or even a loaf of sandwich bread is really satisfying," he muses. "It's a hands-on thing that you can do for yourself and it's really pleasing to other people."

Though he soon hopes to retire completely, I don't imagine that the oven will go cold anytime soon. "I'd like to perfect English muffins at home," he admits. "It can't be that hard. I think I know enough to figure it out." —Emily Teel

Hi, So much time since we are stuck with the stay at home orders in Pennsylvania that I thought Id like to learn and practice yeast doughs, specifically bagels and bialys since these are not available in central Pa. I also am from NJ, so to find them anywhere done well is impossible. When I began I started with the Red Star Platinum yeast, bagels were excellent. Now this yeast is no where to be had. Found the instant yeast, sweet doughs came out great. Bagels not the same results, rose then deflated. Now to my bialys , your recipe. First time used measuring cups (plan to change to measuring), the dough was extremely stiff/dry but end product was okay. Did Not rise much and was chewy, not airy enough. Mixed & kneaded all by hand. Second time, used a stand mixer (surprise gift from my husband!!! Wow). Still measured with cups, was very dry so added 1 Tablespoon extra water. Kneaded for 8 minutes on 1st speed. Next day followed instructions & then baked. Results were similar, did not rise much, not enough light & airy texture i'm looking for. I dont have the experience to know how to get the end results. Is the kneading maybe not long enough? Any suggestions Id greatly appreciate! All future attempts will be weighed, not cups.

I wish the Baker’s Hotline would respond to this. Mine also did not rise much and were chewy (good thing) and definitely not airy enough. They tasted delicious by the way. Experts?

Thanks for bringing it to our attention that this question didn't receive an answer! We've gone back and responded to it now.

I unfortunately had the same experience followed the recipe as indicated and my bialy's came out a little chewy.
Any recommendations?

Hi, Nellie! While bialys are intended to be pretty chewy, much like a bagel is. If it was also dense, though, the most common reason for this is too much flour making its way into your dough, at least for folks who are measuring in cups. If that describes you, then our How to Measure Flour guide can help! If you're measuring in grams, though, we'd recommend you reach out to our free and friendly Baker's Hotline so that we can help you troubleshoot in more detail. Happy baking!

Hi Robin, it sounds like you may have had a touch too much flour in your dough, which is a super common pitfall for folks who are measuring their ingredients in cups! If you have access to a digital kitchen scale, that's definitely the best way to get consistently accurate measurements. But if that's not an option, then visiting our handy How to Measure Flour guide is a great way to ensure you're getting just the amount of flour you want in our cup, and no more. Happy baking!

What a great story. Food is like music. the smell and taste of certain foods reminds you of a wonderment of one type or another. I still picture my mom and her hands working on cookies or stuffed cabbage or aros con pollo. When making bagels or bialys I think of the old cranky wonderful guy from Philly that taught me how to bake bread.
I have a question before trying these. The recipe says to "toast later before eating them " and I was wondering how to do this without a toaster-oven ?
Karen, you could toast these in a standard toaster, or even in your oven for a few minutes, until golden brown. Bryanna@KAF
My favorite way is to split them, butter the cut sides, and broil until they are the color you like. Smear cream cheese on them, of course.