Better biscotti is on the way

The other day I had a discussion with a fellow about biscotti. I’d just made some, and asked him if he wanted one.

“I don’t like biscotti,” he said, wrinkling his face and pursing his lips to reinforce the point.

I’m thinking, what’s not to like about biscotti? Crunchy, light, a perfect balance of sweet and whatever flavor you’ve nudged them towards… Rather than continue along the “Yes you do, no I don’t” path, I decided to branch off.

“What’s your favorite flavor?” I asked.

He thought a moment, smiled, and said, “Believe it or not, black licorice.”

Ah-HA! He’d played right into my scheming hands… I went into the kitchen, and pulled my favorite biscotti recipe off the wall. Note to self: King Arthur Flour’s next cookbook should be entitled “Off the Wall Recipes,” because I keep my favorites, those grease-stained, tattered printouts I use all the time, clipped together and hung on a pegboard in the kitchen, for easy reference.

So, how exactly did this particular biscotti recipe become my favorite?

1) It’s easy. With the hectic pace of life these days, I’m a sucker for EASY. And FAST comes in a close second;

2) It makes a light-and-crunchy (rather than traditional, rock-hard) biscotti;

3) It involves just enough playing with dough to be fun without becoming an onerous task;

4) It makes professional-looking biscotti. I mean, who knew I could make biscotti that look like those perfectly formed ones they sell at Starbucks–and taste much better?

Biscotti are especially appropriate at this time of the year, when you’re madly trying to rustle together your home-baked holiday gifts. Bake the biscotti first! They keep easily for a couple of weeks on the counter–no need to freeze. Just wrap airtight in a plastic bag, find an out-of-the-way corner (away from prying eyes and smacking lips), and stash. Bring ’em back out when it’s time to assemble the gift bags.

Another really nice biscotti characteristic is their chameleonic ability to take on any flavor you choose. Hazelnut, vanilla, almond, coconut, cinnamon… those are easy. But how about cherry flavored biscotti studded with chocolate chips? Or butter-rum with pecans? Then there’s eggnog-flavored biscotti dipped in white chocolate or dark bittersweet ganache… be still, my heart!

But back to my friend the biscotti-naysayer. I made some black licorice biscotti–uh, make that anise-flavored, with fennel seed–stuck a half dozen in a gift bag, and presented them to him. He was skeptical… but the pull of sugar and licorice proved too strong for him to resist. He tried ’em, and–hey, he LIKED them! “These aren’t what I thought biscotti were like. These are GOOD,” he mumbled, munching away. “That’s because they’re American-style biscotti,” I told him. “You know us Americans: more sugar, more flavor, more crunch, MOREMOREMORE! Too much is barely enough.”

Want to convert a lukewarm biscotti fan into an apprecianado? Or make a biscotti-lover’s holiday extra-special? Follow these easy steps to American-Style Biscotti. 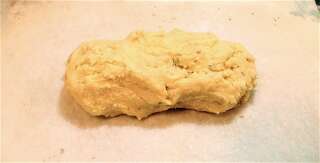 Mix up your biscotti dough, shape it into a rough log, and place it on a lightly greased or parchment-lined baking sheet. 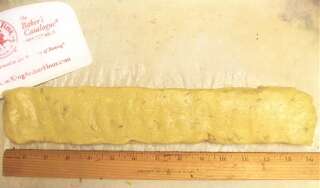 The dough is easily malleable, like clay. Shape it into a smooth, flat-topped log, about 14" long and 2 1/2" wide. 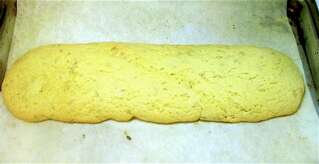 Bake the log; it'll puff up a bit and spread out. After it's cooled for about 10 minutes, lightly spritz with lukewarm water; this will make it easier to cut. 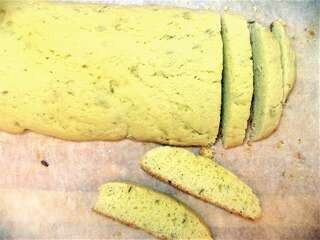 Use a serrated knife to cut the biscotti in 1/2" to 3/4" slices. Cutting crosswise will give you short (about 4") biscotti. 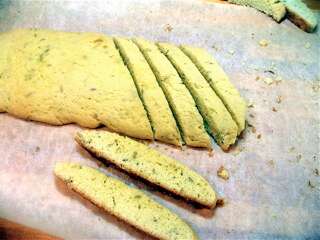 Or cut the log at an angle, for longer, "standard-size" biscotti. 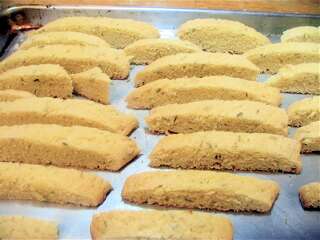 Place the biscotti back on the baking sheet. You're going to bake them again, so they become dry and crunchy all the way through. That's where the word "biscotti" comes from: the Latin for "twice baked." 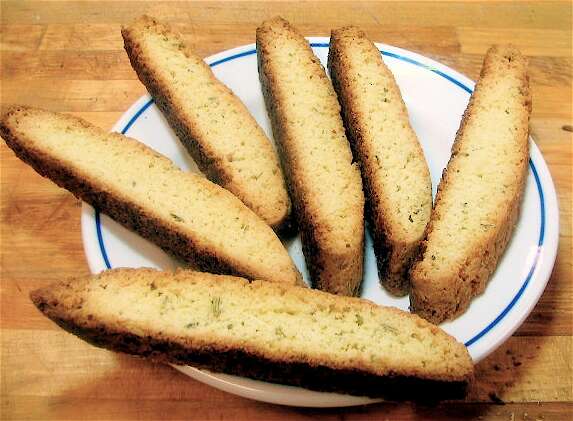 My biscotti always comes out flat. What am I doing wrong.

Hi Margaret, it sounds like your biscotti dough might be a little wetter than is ideal. If you're making one of our biscotti recipes and substituting another brand of unbleached all-purpose flour this could result in a wetter dough. This is because our unbleached all-purpose flour is higher in protein (11.7%) than other brands of AP flour. A higher protein flour will not only develop a stronger dough, but it will also absorb more liquid than a lower protein flour. Another issue might be the temperature of your oven. If it tends to run cool, this could allow the dough to spread more as it's baking before the dough has a chance to set. Purchasing an oven thermometer might be helpful to determine if your oven is running a little hot or cold (which is not at all uncommon with home ovens). Preheat your oven for a full 30 minutes, and then check the temperature on the thermometer and adjust your oven setting accordingly. Don't start baking your biscotti until the thermometer is reading the correct baking temperature. Our biscotti pan might also be helpful to you, since it will help contain the spread.

My biscotti came out rather dense and heavy not light and airy
But the taste was great. I made a double batch at one time. Can you tell me why it was like this?

Hi Linda,
Dense and heavy are classic signs of adding a bit too much flour to your baking. We have a terrific short video on our preferred way to measure to ensure each cup of flour is as consistent as you can be without a scale: https://www.kingarthurbaking.com/videos/baking-skills/how-to-measure-flour.

my bisscotti looks rough.............how much should one handle the dough to make it smooth when baked

Hi Jane, you may find that a little water on your hands will help to smooth out the surface of your biscotti. Also, be sure that you're not adding extra flour if you happen to be measuring your flour by cups. For our recipes and flours we recommend either weighing your flour, or using this method to measure your flour by volume. Extra flour may be causing your dough to be rougher/drier, which could be making it more difficult to achieve a smooth dough.

Can you suggest how to make what you call rock hard non-american style biscotti? My husband dips his biscotti into hot coffee in the morning and wants that old fashioned type.

If you're looking for a classic, dunkable, crunchy, tasty biscotti, look no further than our Vanilla Biscotti recipe. It's like this one, just a little less soft around the edges. Thanks, and happy dunking!

Hi Diane! We don't think there would be the same benefits with biscotti dough due to the long bake time. If you find your dough is too soft to shape, you can pop it in the fridge for 20 to 30 minutes to firm up the dough which will help when making free-form loaves. Happy baking!