Pastry is an important foundation in a baker’s repertoire, and there are so many versions to master — everything from traditional recipes like Classic Puff Pastry (Pâte Feuilletée) to the unique blitz pastry in Raspberry Puff Turnovers.

One thing almost all of these versions have in common? Butter (and typically lots of it). Butter is key to achieving successful pastry, and as a result, its role in a recipe is undeniably important. And not just the amount of butter, either. One of the biggest factors to consider is also the temperature of the butter you’re using, because manipulating that temperature allows you to control the final result of your pastry.

For instance, are you trying to achieve pastry that's flaky or tender? Lofty or compact? The answer to such questions will determine which temperature butter you should use: cold or room-temperature. Both provide different results, and both are critical to the specific pastries in which they’re used. Going with room-temperature butter to make a pastry that requires it cold, for instance, will leave you with a final baked good with compromised texture.

First, it’s important to understand butter’s temperature range. Like water, butter’s physical form shifts across a spectrum of temperatures. At 35ºF, butter is solid and hard. Around 68°F to 72ºF, butter has softened a bit but still holds its shape; bakers call this state "plastic." Many recipes call for butter at room temperature, which refers to this range, because this is the temperature at which butter is easiest to work with. 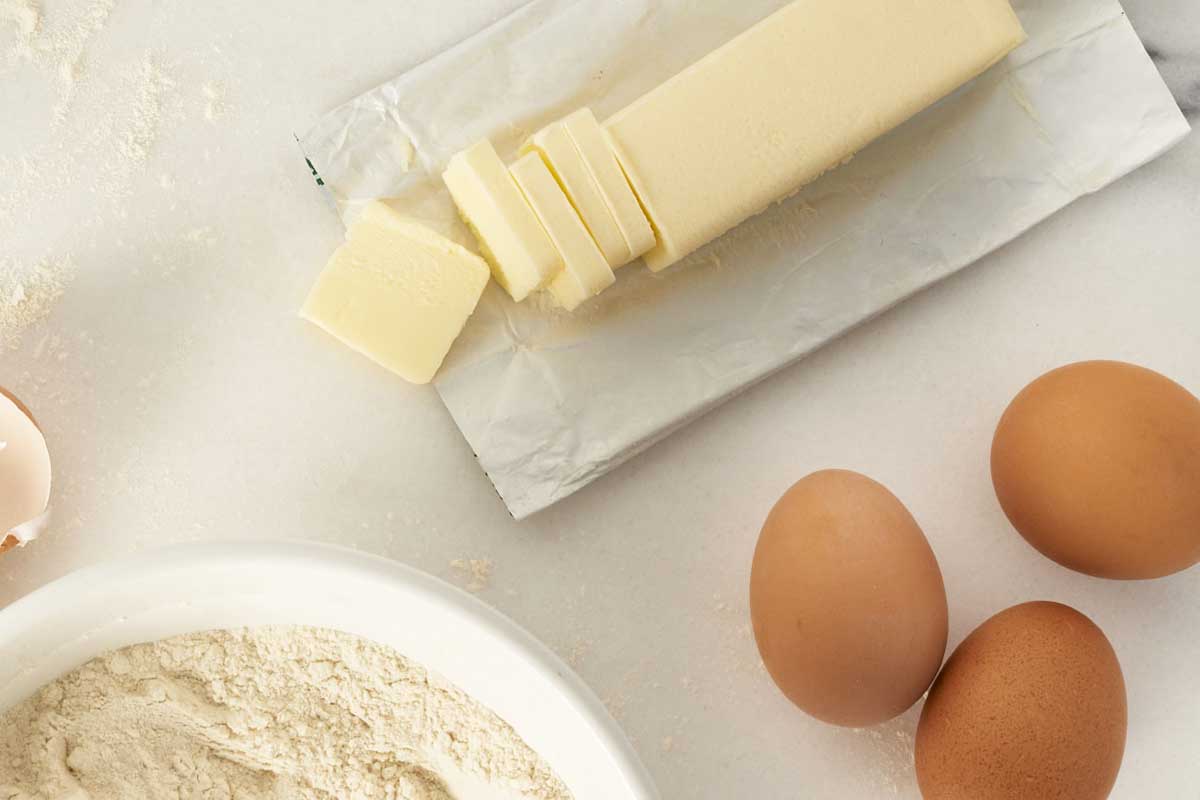 By the time the temperature heats up to 80ºF, butter starts to get very soft, almost melted. (This will likely be familiar if you’ve ever tried to quickly soften butter in the microwave and took things a little too far.) By 94ºF, the bonds holding together butter’s fatty acids break completely, turning butter into a liquid (i.e., melted butter).

The role of butter in pastry

When it comes to pastry, butter can be responsible for a few key (and sometimes opposing) characteristics:

One related characteristic that butter can also be responsible for? Leavening. When those solid chunks of butter melt in the heat of the oven, not only does it create flakiness — the steam released from butter's moisture causes gaps in between the dough to expand, which leavens the pastry for lofty lift.

You may notice the difference between these roles: for tenderness, it’s best for the butter to be soft so it’s easily incorporated into the dough to coat the flour particles. For flakiness and leavening, the butter should be solid so it remains separate from the dough in layers.

Which all comes down to … you guessed it … temperature!

When to use room-temperature butter: Tender tart doughs

Room-temperature butter is key to pastry that relies on tenderness, because its soft, pliable texture means it can easily be incorporated into the dough to coat flour particles, ensuring the baked crust will remain crumbly and delicate without any chewiness.

The best example of this is tart dough. Most tart dough recipes will call for butter that is softened or at room temperature. It may then be beaten with sugar before adding flour — like in this Milk Stout Caramel Tart — or the soft butter can be mixed directly into the dry ingredients, such as in Cream Cheese Tart or French Apple Tart.

When it comes to room-temperature butter, though, just remember that not all kitchens are actually the same temperature. This means some butter might get too soft in a hot kitchen, while baking in the winter could leave your butter cold after a full day on the counter. So pay attention to its texture: when gently pressing the butter with your finger, it should easily leave an indentation. If you want to use a thermometer, the ideal temperature is 68°F to 72ºF.

When to use cold butter: Flaky laminated pastries

If you’re looking for flakiness, cold butter is the way to go. You want the butter to be as solid as possible before working with it in the dough, so that it will keep its shape in layers rather than seeping into the dough and tenderizing it. 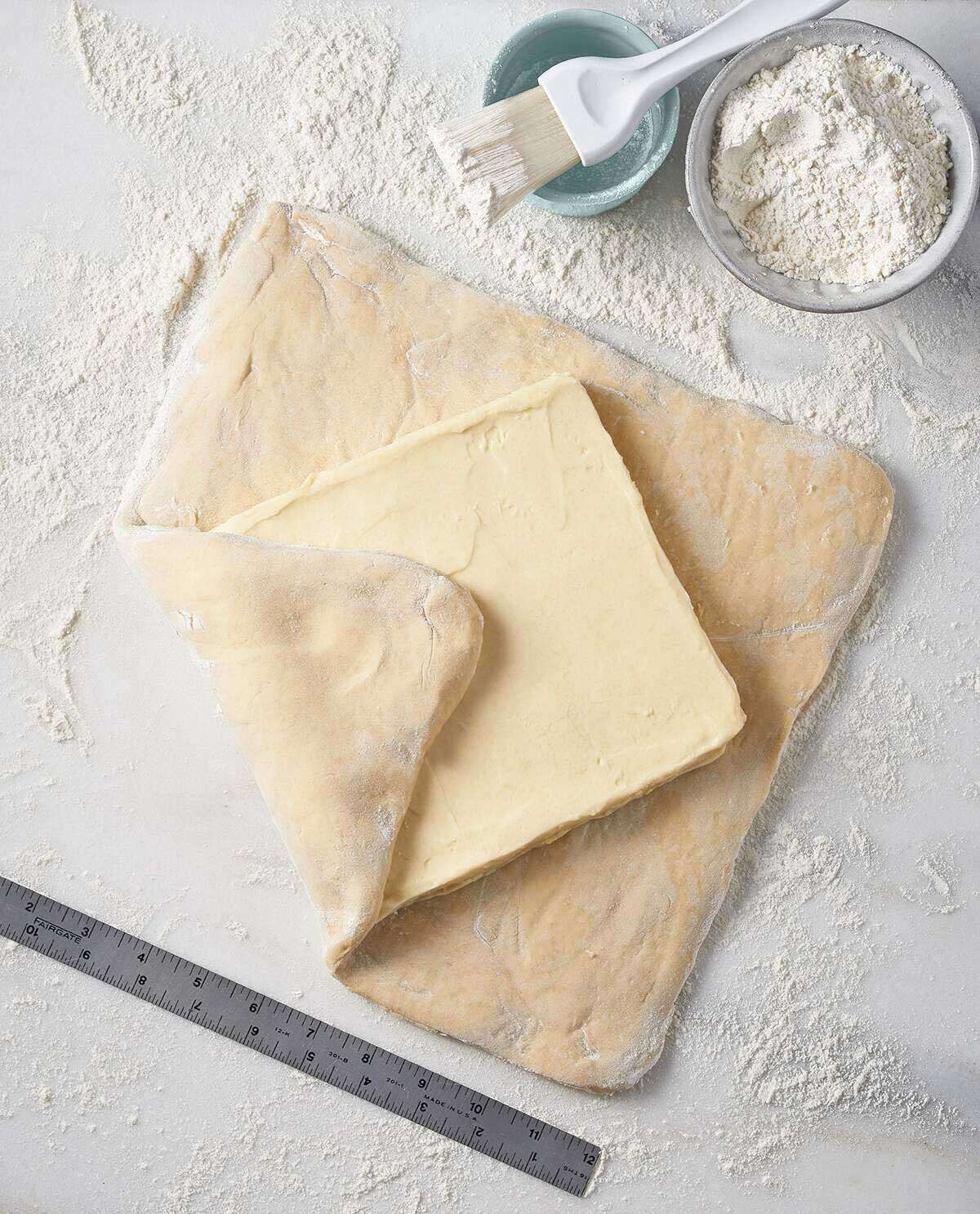 This flakiness is integral to laminated doughs like Croissants, or shortcut versions of these pastries, such as Fast and Easy Puff Pastry.

The need for solid butter is why most of these recipes require you to not only start with cold butter, but also to chill the dough in between rolling and folding. This way, you can roll out the solid butter into long, thin sheets in the dough, which will turn into beautiful layers in the heat of the oven. 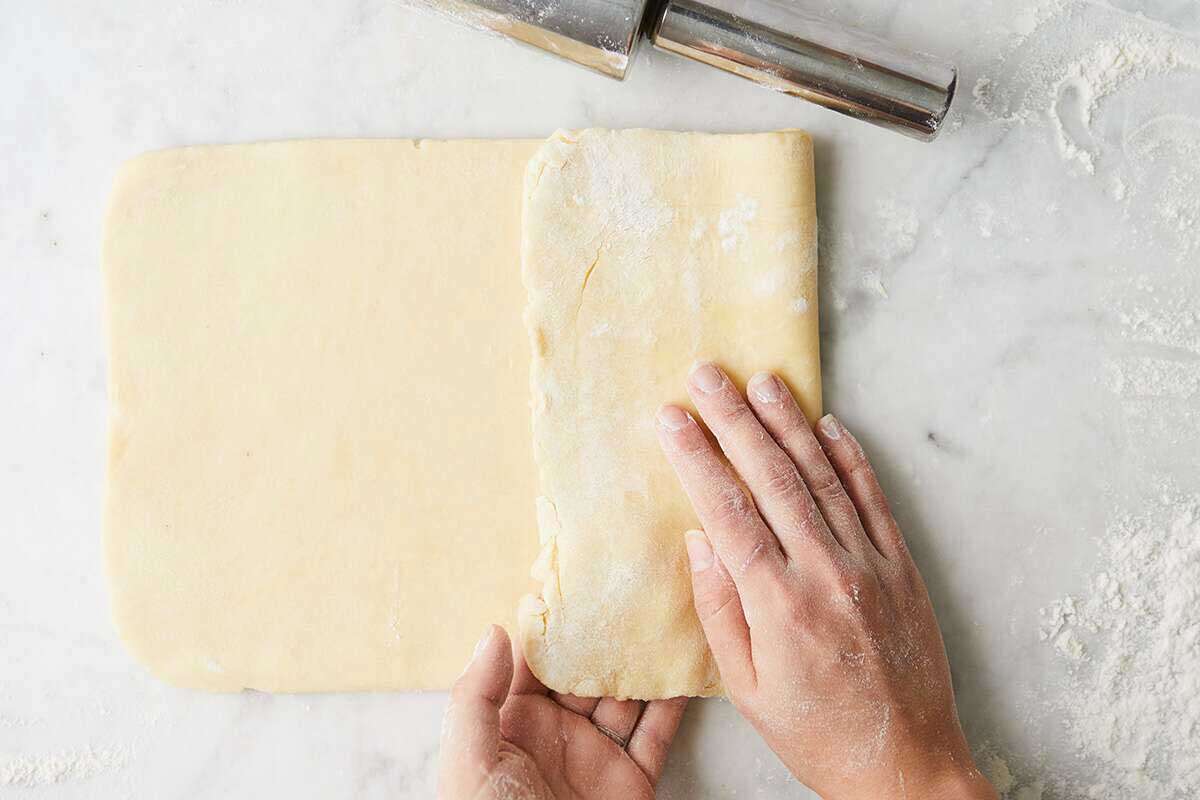 One problem though — super cold butter right out of the refrigerator is so solid that it can be hard to work with, even tearing delicate dough when you initially try to work it in. To get around this issue, focus on changing the texture, not the temperature. This is why you might pound the butter with a rolling pin to flatten it before using; that way, the consistency of the butter has changed to make it more pliable, even if the all-important temperature hasn’t.

What if you want flakiness and tenderness?

One pastry that’s ideally both flaky and tender? Pie crust. That’s why pie pastry is uniquely formulated to maximize both butter’s tenderizing and flakiness properties.

In order to ensure that the finished crust is super flaky, pie crust always starts with cold butter. That way, the butter will remain in solid chunks in the dough that evaporate into layers during baking. Good!

At the same time, the crust needs to be tender — it should yield easily beneath a fork, rather than developing any kind of chewy texture. So when making pie dough, butter is cut into the flour in small pieces; although they don’t coat all the flour particles like softened butter would, these pieces are small enough to still coat some of it. 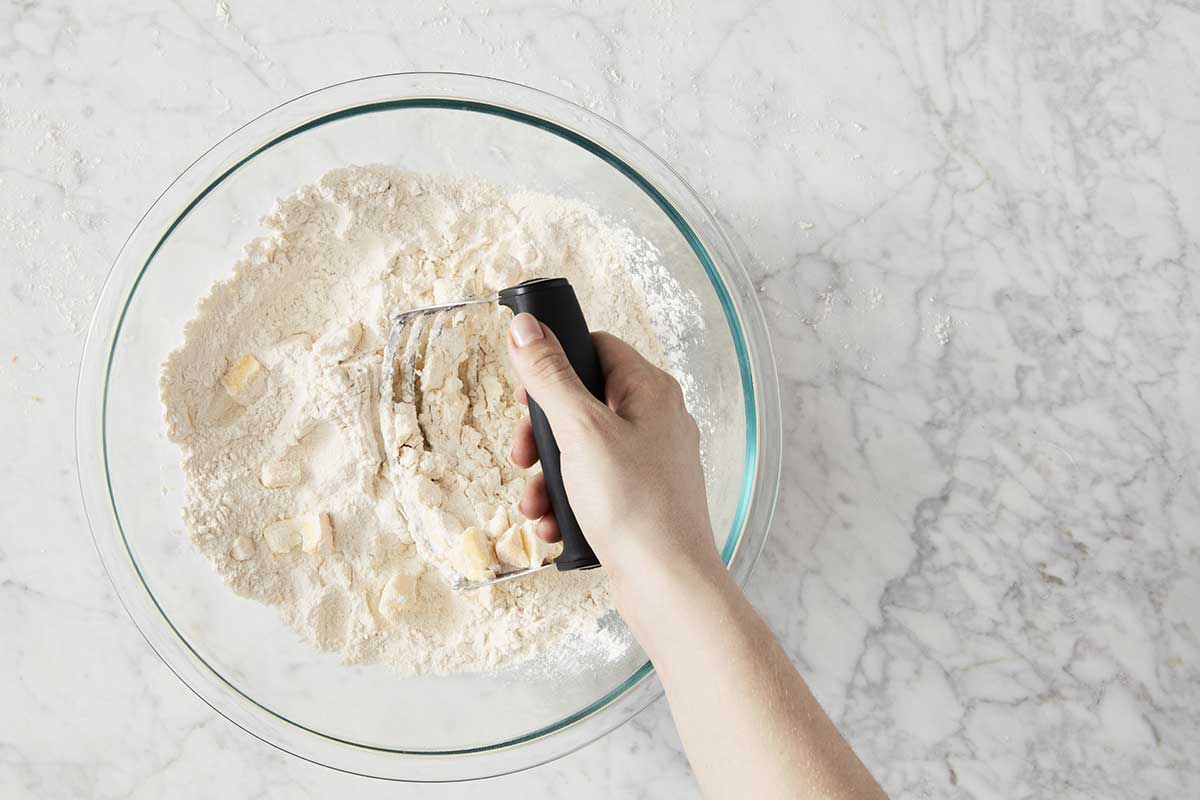 This butter barrier prevents gluten development, flour from binding together, and the absorption of too much liquid, keeping the final crust tender instead of tough.

One quick note — why is butter the main fat in pastry? After all, there are plenty of fat options in baking, and the variable temperature of butter means that it’s not always the easiest one to work with. For instance, if a baker wants a fat that remains solid at a wide range of temperatures, why not use shortening?

One reason is because of butter’s fat content. Butter is approximately 80% fat and 20% water, as opposed to shortening and other fats that are 100% fat. (Note: This fat content is for American-style butter, as European-style butter is slightly higher in fat. For more details, see our post Butter for baking.) That extra bit of water in butter evaporates in the oven, helping create layers; without the extra water, shortening doesn't achieve similar flakiness.

The second reason is for mouthfeel and taste. What butter lacks in physical consistency, it makes up for in its pleasant mouthfeel and rich flavor. Shortening, on the other hand, can be waxy and sterile tasting. In addition, butter has milk solids that help with browning and flavor. So bakers simply control butter's temperature throughout the entire baking process to make up for its variable texture.

Stick to the recipe

Baking is an exact science, and the smallest deviations in measurement or temperature can often greatly impact your final baked goods. When embarking on a pastry-making adventure, be sure to read the recipe closely and stick to the recommended butter temperature it calls for. In return, you'll be rewarded with the flakiest of croissants and most tender of tarts.

For a deeper dive on laminated pastries, watch the Pain au Chocolat episode of our video series Martin Bakes at Home, in which King Arthur baker Martin Philip and his son Arlo show you how to achieve pastry mastery. 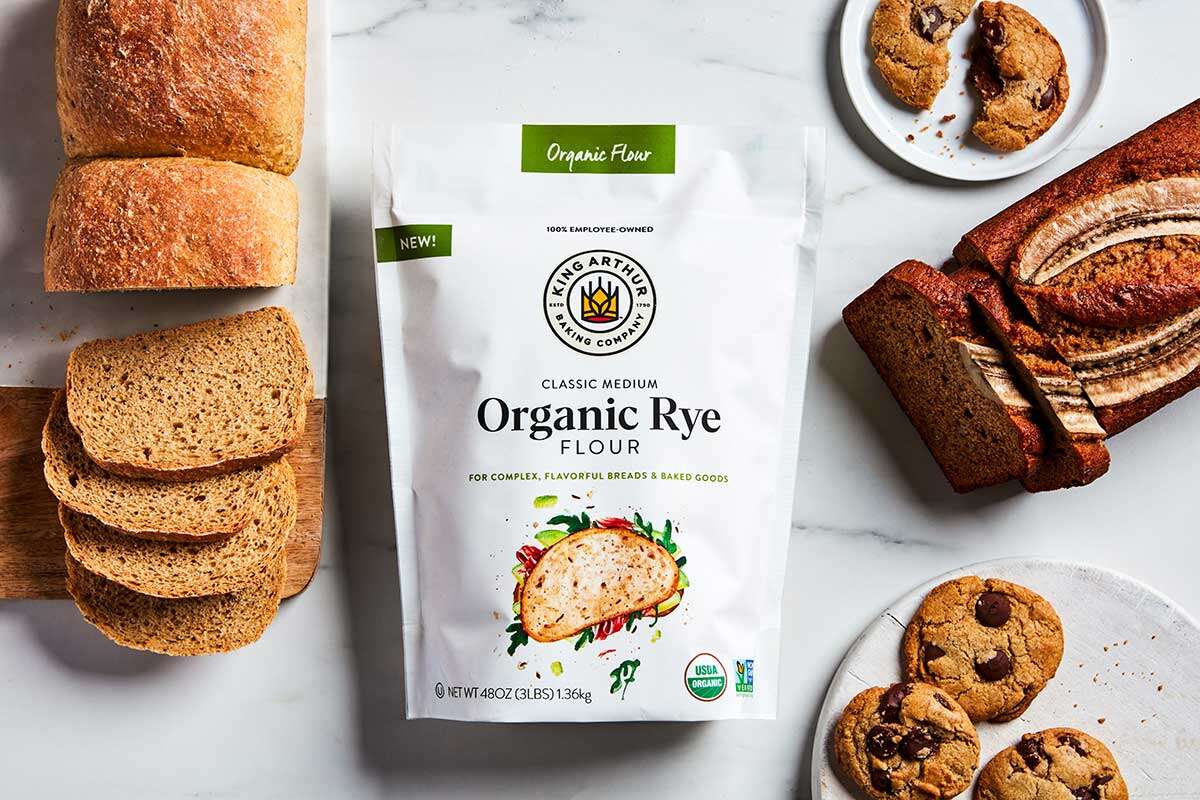 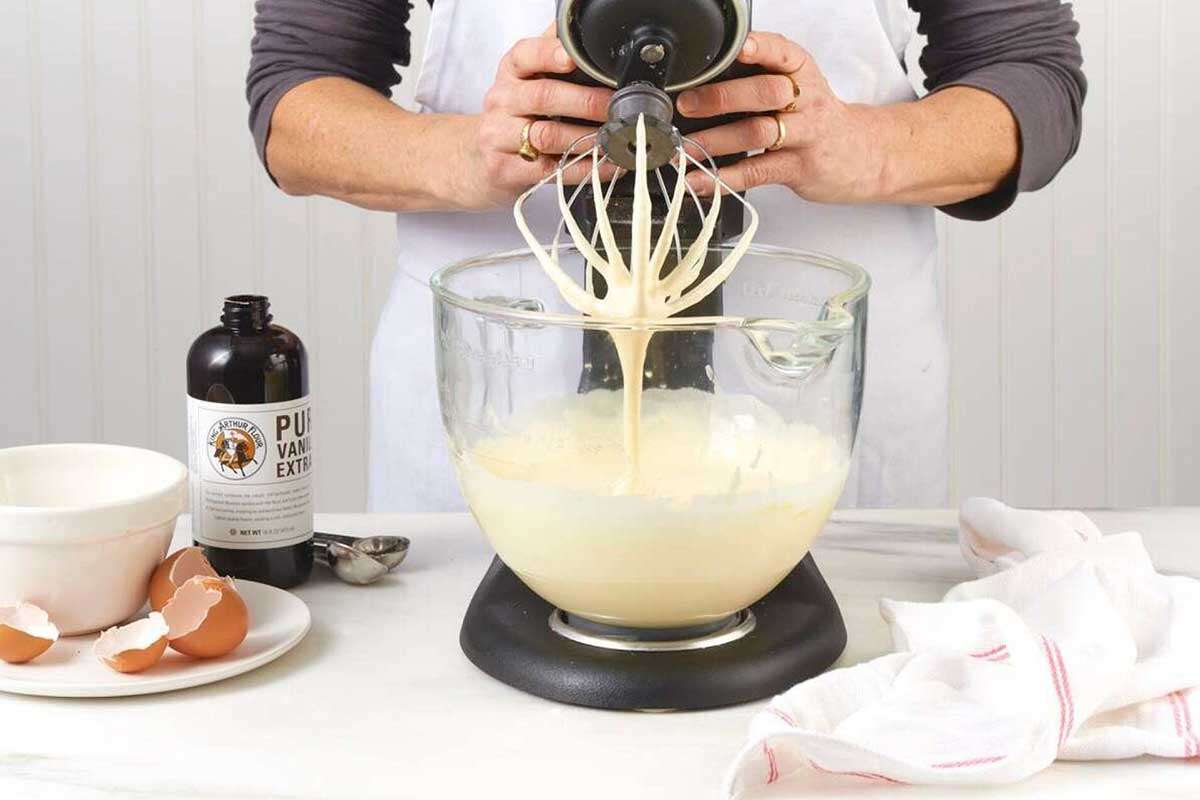 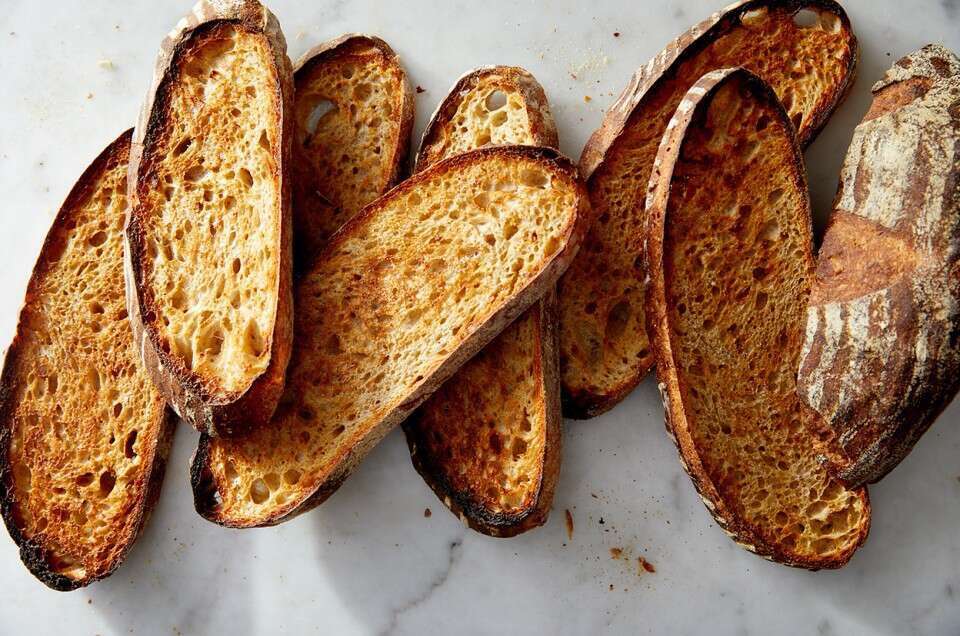 Finally a straightforward, informative and applicable instruction on the hows and whys of butter. I got it! I feel I can tackle that pie crust that I fail over and over again. You write simply and don't muddy it up or spin in circles. Understanding the use of butter vs shortening makes all the difference to understanding texture and the results we want to achieve. I like how you show examples of the textures, ..." tender and crumbly, with a wonderful “melt-in-your-mouth” texture — think shortbread,... " An aha moment. I had several ahas reading your article. Thank you. I have a better understanding of butter and that knowledge can be applied to the outcome I want to achieve. I look forward to learning more from you! Life is Good.

As usual ---- you continue to give us learners those tidbits that hopefully will , someday make us better bakers. I personally think that baking is a special form of meditation that lasts from the first cup of flour to the last bite

Thank you for this very informative article! I want to try baking more pastries rather than just bread, so I am very excited to read so much about it.

I recently looked at a recipe that called for shredded butter (using a cheese grater). When would you use grated butter and how does that affect texture and flavor? Thanks for this great article!

Marilyn, there are many different techniques used in making pastry doughs. Some recipes use grated butter, some use one size butter pieces, either large or small, and some use a two-stage, two size method for incorporating the butter. All seem to work. My suggestion is to follow a recipe and see which one works for you. The choice is yours.

How about the fat/water content of lard? I have an old pie crust recipe that calls for lard and that crust doesn't have the same taste but does have the same texture.

John, lard has a water content of approximately 12-18% depending on how it was processed.

I’ve been baking since...ever...and I’m amazed at how little I apparently new about “butters” role in baking.
Thank You so for posting this article!!!

I always get all of my ingredients to room temperature before I bake, especially any raised dough recipe. Temperature is vital, particularlly if you have eggs to add; cold eggs, butter, and milk can bring your dough temperature too low to get your yeast to rise properly.

I've made puff pastry many times and understand why the butter has to be cold, but why is it necessary to pound it with a rolling pin and roll it out cold? Why couldn't the butter be spread out soft at room temperature on a sheet of parchment, then chilled to the correct temperature before making the folds? To me it would seem the net result would be the same if the butter is kept cold after that first step.