A beloved recipe is rediscovered

Ah, there you are at last – the rolls I've been dreaming of lo, these many years.

My... oh, never mind the superlatives. Let's cut right to the chase.

Years ago Sue Gray, a long-time colleague here in the King Arthur Flour test kitchen, developed a recipe for light-textured, crisp-crusted, wonderfully flavorful, and truly elegant-looking hard rolls. They were featured on the cover of one of our catalogues; I remember the picture well, as it was one of those “I want that bread RIGHT NOW” shots.

Now, this was before online recipe boxes, or similar virtual storage methods. So I tore the recipe out of the paper catalogue and filed it... somewhere. Out of sight, out of mind. I made the rolls a few times, then forgot about them.

Until recently. In the process of having our office painted, the King Arthur Web team had to relocate for a few weeks; which entailed moving a whole bunch of stuff, including my collection of catalogues stretching back to the very first one, in September, 1990.

While trundling my catalogues down the hall to our temporary new home, I came across this one, from February, 2000: 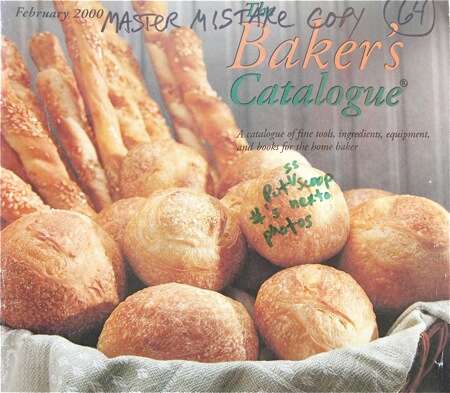 There they are! Those rolls. The ones I loved so much.

But where's the recipe? I'd already torn the page out of the catalogue, and my days of keeping manila folders stuffed with paper recipes is long gone.

Luckily, I found it online. With over 2,000 recipes on our Web site, it took a bit of searching; but the word “crusty” turned up 8 recipes, and I was quickly able to identify the one for these rolls.

Eureka! Made ’em. Loved ’em. They're everything I remember.

And now, before I forget – I'm bookmarking this blog post!

Join me as I make Crusty European-Style Hard Rolls. 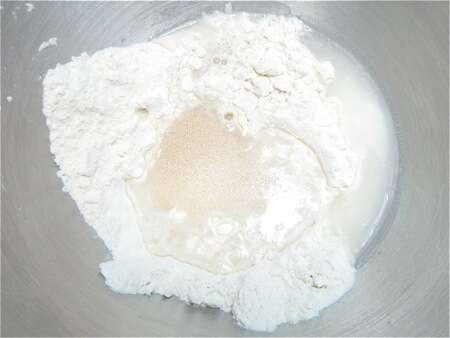 First, we'll make a starter. Put the ingredients below in a bowl. The same bowl you'll use the next day to make the dough is a good choice. 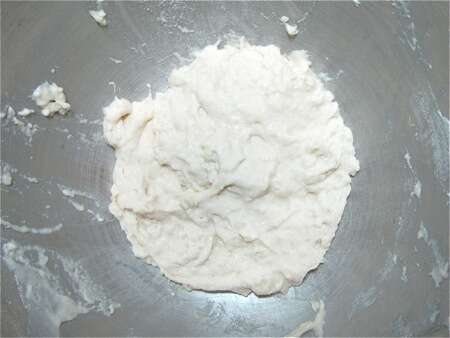 Next day – see those bubbles? Yeast, flour, water, and time, hard at work! 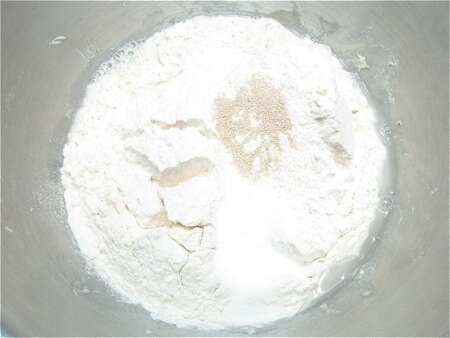 Add the following ingredients to the starter in the bowl: 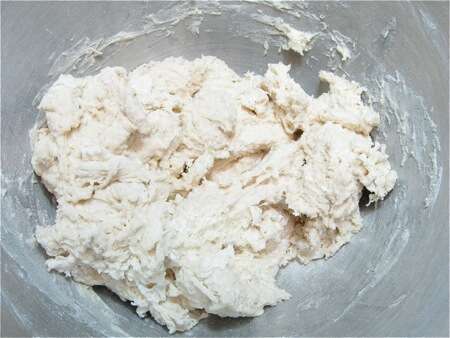 Mix everything together until cohesive.

Then knead for about 7 minutes (at medium speed in a stand mixer). Knead about 10 minutes by hand. 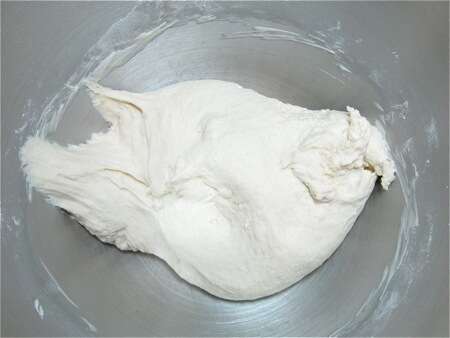 Your goal is a soft, somewhat smooth dough; it should be cohesive, but the surface may still be a bit rough. It may also stick to the bowl just the tiniest bit.

Of course, you can also do this whole process (including the first rise) in the bread machine set on its dough setting. 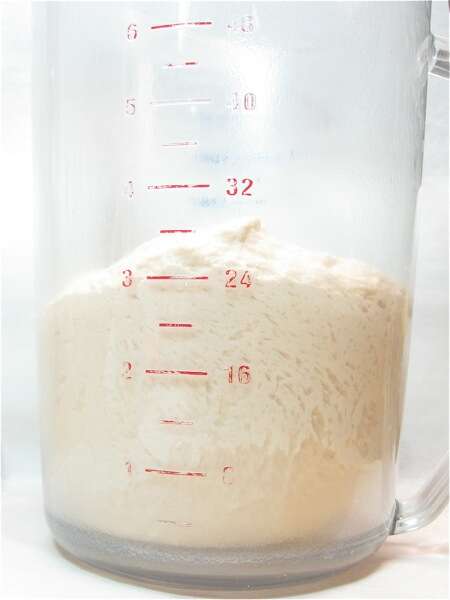 Place the dough in a lightly greased bowl, or in an 8-cup measure, as I've done here. The measuring cup makes it easy to track the dough's rise.

After 1 hour, it will have barely risen – the 3/8 teaspoon yeast in the recipe is working slowly. But that's OK, we want it to, because we're giving this dough a long rise.

Gently deflate the dough, and return it to the cup or bowl. 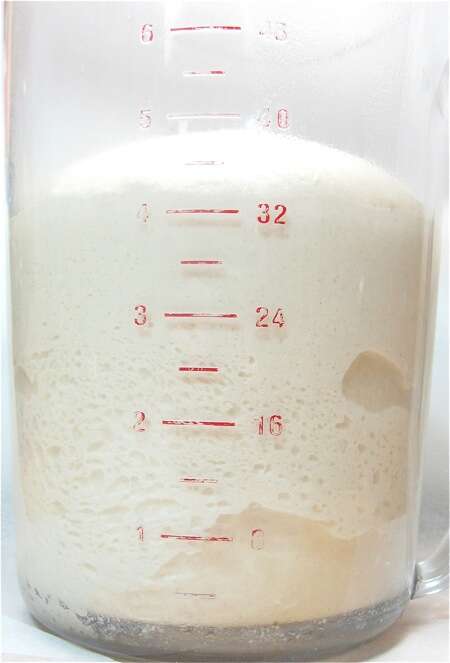 Deflate the dough again, and return it to the cup or bowl.

Wait 1 more hour (for a total of 3 hours since you started).

Did you know that yeast doesn't reproduce in a low-oxygen environment – e.g., when it's in rising dough? It simply eats and releases CO2 (which makes the dough rise), and organic acids and alcohol (which give the bread flavor). 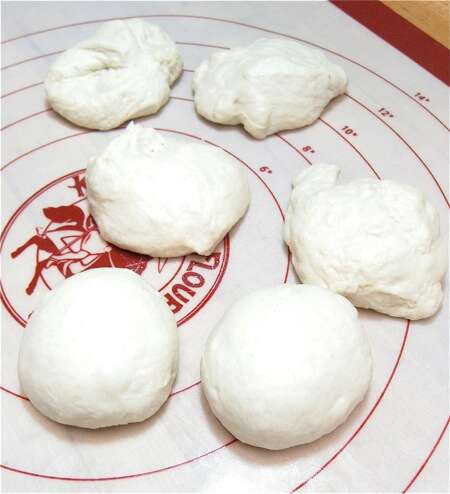 Turn the dough out onto a lightly greased work surface. Divide it into 12 pieces. Shape the pieces into balls, firming them up by rolling them under your lightly cupped fingers. 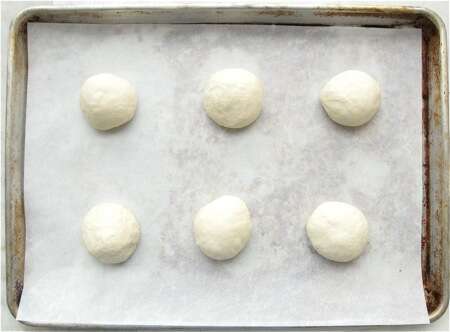 Place the rolls on a parchment-lined baking sheet, cover them, and let them rise for 1 to 2 hours, until they're puffy, though not doubled in size.

I was doing an experiment here, so divided the rolls between two baking sheets. You could crowd them onto one; but for best shape, six on a sheet is a good choice. 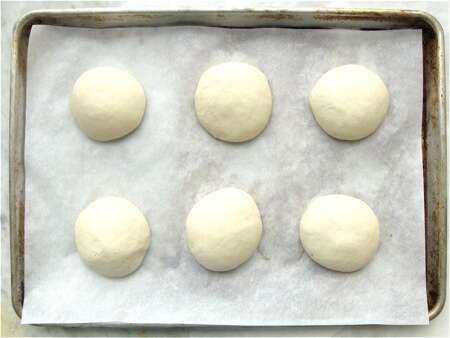 The rolls will flatten out a bit as they rise; that's OK. 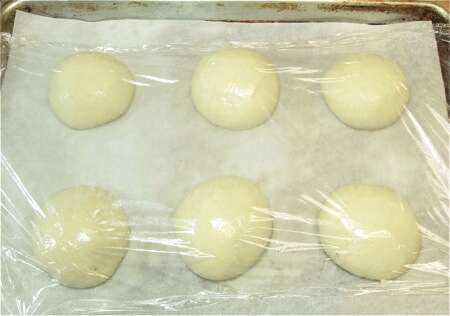 Very gently cover the rolls with lightly greased plastic wrap, and refrigerate them for 2 to 3 hours.

This “cool rise” will increase the dough's output of acetic acid, which will give them the merest tang; their flavor won't be even close to that of sourdough, but will simply seem rich and more complex than that of the typical white roll.

Towards the end of the rolls’ chill, preheat the oven to 425°F. 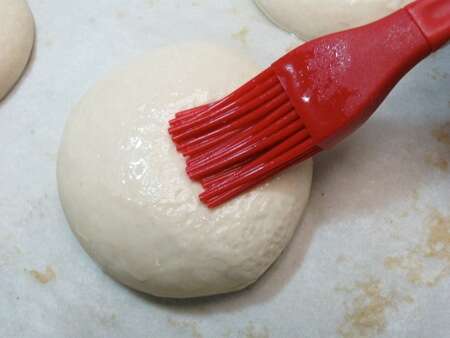 Whisk together 1 large egg white and 1/2 cup cool water until frothy. Remove the rolls from the refrigerator, and brush them with the wash; you won't use it all up.

Again, don't be discouraged if the rolls seem a bit flat; they'll pick up when they hit the oven's heat. 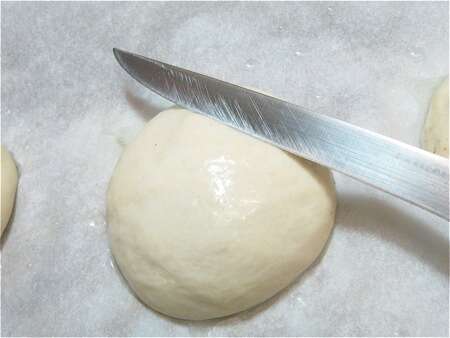 Quickly and decisively slash the top of each roll. 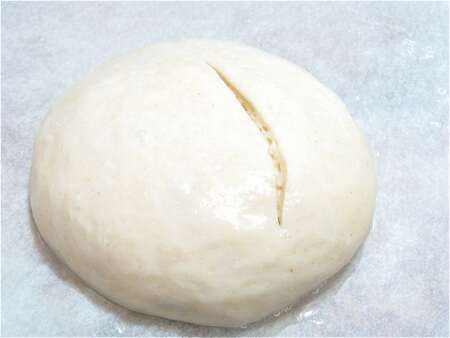 Immediately put the rolls into the oven. 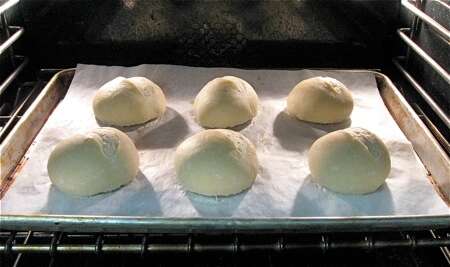 Within minutes, they'll start to puff up. WHEW. It's always a scary moment when you slash risen bread dough and it starts to deflate... 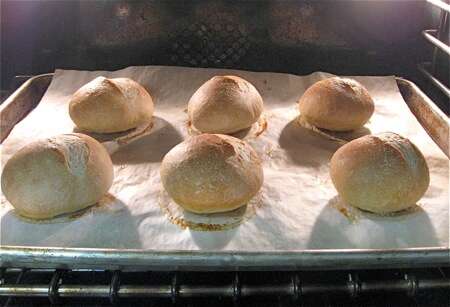 Bake the rolls for 20 to 25 minutes, until they're a deep golden brown.

Remove them from the oven, and cool on a rack. Or, for best crunch, open the oven door, and allow the rolls to cool in the turned-off, open-door oven. 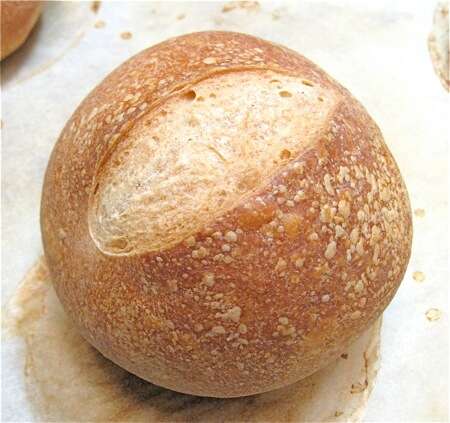 Is this not a thing of beauty? 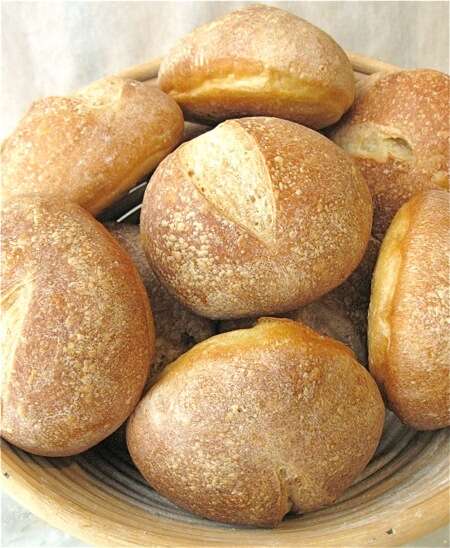 As well as a joy forever. 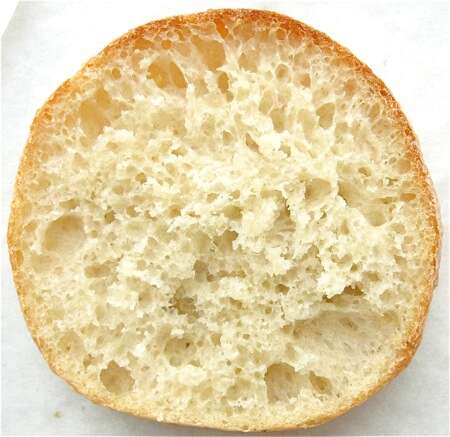 Nice interior. And notice the thin crust – which by the way is crisp, not leathery.

You may be tempted to think “more is better,” but my experimenting tells me that 2 to 3 hours in the fridge is just right. 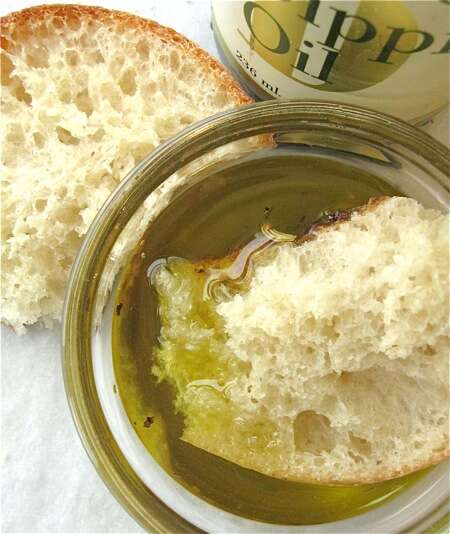 A dip in flavored olive oil is a delicious final touch.

The rolls look wonderful. I'm reminded of a neighborhood coffee shop that serves chili or clam chowder in a large version of these rolls. I believe they call them bread bowls. Would adding sourdough starter make these rolls into sourdough rolls? Substituting fed starter for the overnight starter would make these officially sourdough. They may not taste really sour; I'm thinking more of a tang instead... But they should be fine. Enjoy- PJH
PJ, these look great. I would like to try the whole wheat variation mentioned by Elizabeth. I prefer to measure by weight when I bake. Can you tell me the weight measurement for white whole wheat flour for this recipe?
Oh THANK YOU PJ! THIS is the recipe I've been waiting for. Read this at about 10:00 PM last night and almost stirred up the starter...wishing I had now. Will do it tonight and try them tomorrow. Thank you again! Good luck, hope you love them! ~Amy
Oh, these are too lovely! I am now tempted to try them with a sourdough starter - what do you think? I would have to increase the bulk fermentation time, but perhaps it would work well too.... Do them with fed sourdough stepping in for the overnight starter. If you don't add any yeast at all then yeah, you'd have to increase the bulk fermentation time quite a bit... PJH
These look absolutely wonderful! Have you tried them with Whole Wheat or White Whole Wheat flour? I am not sure if Sue tried it with whole wheat but you certainly could make the substitution. Try replacing the AP with 1 - 1 1/2 c. of WWW or WW in the second addition. You may need to add 1-2 t. more liquid to balance the dough's consistency. Elisabeth
Oh, how delicious thye look ! I got to make starter today, so we can hae them tomorrow. Thank you posting the recipe. This is something I have been looking for long time. I shall let you know how I did. elizabeth
Hi PJ. Can't wait to add these to my KAF bread/rolls repertoire! One quick question -- the recipe says to knead for 7 minutes on medium speed. I thought the kneading speed (at least on a KA) is #2, which is of course low. Do you guys typically use a higher speed for kneading, or just in this case? Thanks! Emilie I typically use a higher kneading speed than KitchenAid calls for for, yes. On the KA, I don't use the slowest, or the second slowest, but the next one up from that; it's really hard to ascertain the numbers on a KitchenAid, so I don't usually refer to them. It's all just general guidelines, though - you really have to look and feel the dough to see when it's ready. And there's a lot of leeway there, too; the less you knead, the longer you let the dough ferment, as fermentation develops gluten every bit as good as kneading does. It's all so flexible... that's what I love about yeast bread. Enjoy - PJH
Beautiful! I have been looking for a recipe for the dinner rolls at Bertucci's. They are amazing. I thought maybe they have some semolina in them. I will give these a try! I wouldn't doubt the Bertucci rolls could have semolina - gives them such pretty color... I think you'll enjoy these, Cindy. PJH
Yah, now I can make hard rolls. My very close grocery with the nice bakery closed mid summer. I have been missing the 'european' style rolls they made. (and I can't remember the names to search for recipes). I might play with substituting some sourdough starter for the overnight starter so that I do it all in a day... That should work - make sure the starter is fed and at room temperature, OK? PJH
I must make these this weekend. Are they anything like the German rolls Brotchen? I have been looking for a good recipe for those with no luck. Yes, actually - if you read the comments after the recipe, you'll see one reader says they're very close to brotchen. Enjoy- PJH