All eyes at the next table turn as a waiter walks by and deposits a wooden board in front of us. It’s piled high with a colorful smorgasbord of smoked fish: a veritable Instagram dream. Four types of fish anchor the corners, dotted with rings of red onion, jars of pickled vegetables, ramekins of cream cheese, and a sprinkling of fresh dill and capers. With a flourish, a metal rack of golden bagels and slices of dark rye bread are set down nearby.

We’re at the Russ & Daughters café on New York’s Lower East Side, and we’re in good company. The room is packed and everyone is having a good time. Buzzy and bright, the café has been a riotous success since opening in 2014 as the second location to the original Russ & Daughters shop on Houston Street. All day long, people come from near (many New Yorkers consider it practically a second home) and far (it’s not uncommon for customers to come straight from the airport) to sample the traditional Jewish comfort food.

Russ & Daughters isn’t just a food destination, but a true New York institution. It’s one of the original Jewish appetizing shops, which used to dot the landscape of the city in the early part of the century. Slowly, these shops have all disappeared as the tradition of peddling classic Jewish foods has nearly been lost. Acting as a torchbearer for the appetizing shop tradition, Russ & Daughters is ensuring that doesn’t happen.

Joel Russ opened his original shop on Orchard Street in 1914, selling schmaltz herring. He moved it to its current location on Houston Street in 1920. It’s remained an integral piece of the Lower East Side ever since. In 2009, cousins Niki Russ Federman and Josh Russ Tupper took over the business, carrying on the legacy their family has carefully nurtured for over a century. They facilitated two major changes: opening the new café in 2014 and starting a production operation to make all their own breads and baked goods.

Josh and Niki see their mission as more than just feeding people: they’re reviving a way of life, and connecting people to important flavor memories. “We’re representing and educating people on what a traditional rye bread was, or a traditional New York bagel,” says Josh. “We’re holding strong to what we know. We’ve always stayed committed to — and sticklers for — the real traditional Jewish baked goods, even as those things were disappearing and becoming commercialized. We were always adamant about tradition. We were swimming against the current, but we’ve never wavered.”

Some customers come for a taste of something they remember from childhood — the buttery sweetness of rugelach or a bubbly herbaceous sip of celery soda. Others didn’t grow up with this Jewish food, so Russ & Daughters is a place to discover and fall in love with these traditions. Their success is unsurprising, given how perfectly executed the food is. Visually stunning and made with simple, good ingredients, the menu at Russ & Daughters is all about letting good food shine.

There’s nothing fussy or forced, just excellent iterations of Jewish favorites. But that doesn’t mean a lack of creativity — among the straightforward options like knishes and steaming bowls of borscht, you’ll find chopped salads laden with avocado, apple, and smoked whitefish with chunks of buttery matzo as croutons and a mac and cheese dressed up with rye breadcrumbs and kippered salmon. You can get a postcard-worthy egg cream, a flawless black and white cookie, or a Concord grape soda spiced with jasmine and timut pepper.

All the baked goods at Russ & Daughters — from the babka to the bagels — used to be sourced from other wholesale bakeries. Niki and Josh were constantly searching for bakers who could make bagels the way they remembered them: chewy and golden-crusted and much smaller than what New Yorkers are used to today.

In order to get back to the old ways of baking, Niki and Josh knew they had to take baking into their own hands. “Bread is an example of a very traditional food that got lost in the commercial process, and the flavors got diluted. Traditional Jewish rye bread became deli rye,” Niki says. “We were searching for the intensity of flavor of an original shissel rye, for example, and we couldn’t find anyone doing it that way, so we realized we had to do it ourselves.”

Since opening the café, they now make all baked goods in-house. Helmed by baker James Merker, their team turns out all the babkas, rye breads, bagels, and rugelach for the café, the shop, and all mail-order business. Bringing all of the baking in-house is a key way for Russ & Daughters to continue on as the stewards of these traditions. They’re in the process of opening a vast new bakery and retail space in Brooklyn, allowing them to expand their baking operation and sell much more online. (Homesick New Yorkers across the country are rejoicing at the news!)

“We’re here to connect people to a continuity of food and memory,” says Niki. “We feel an obligation to provide that same taste so that someone can come in and have a bite of our rugelach and have it instantly transport them back to being a kid and having it with their family.”

For more stories about passionate bakers and the finely crafted breads and foods they make, be sure to pick up the latest issue of Sift magazine. Our thanks to Mark Weinberg for the photos in this post. 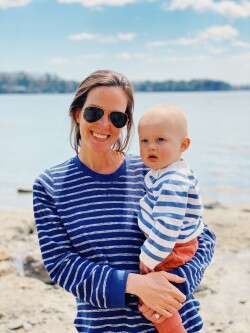 Dee, you are spot on with your comments. Russ and daughters must have spent a bundle on there public relations. They are everywhere. Great smoked fish, no doubt! But geez, our mizrahi and sephardic heritage is almost always overlooked.

The article refers to traditional Jewish foods in New York City. They are the ones I remember growing up with on Long Island. Glad to know that the delicious food of my youth is still available to enjoy. This cuisine is not widely available. For example, when the bakery near my house changed ownership, the bialy recipe changed - and not for the better. The scope of this article was not to herald all the wonderful different Jewish foods available in the world, just the New York Experience.

I am born in NY, grew up in Queens, lived for 15 years in Manhattan, then 15 years in Connecticut...but still worked in Manhattan. I now live in North Carolina. What I miss most about New York is the food...all of it. I grew up with every ethnicity and every ethnic food. I wish everyone could experience the flavor of NY. From the street fairs to the Michelin restaurants. My feet may be planted in the south, but my heart and soul are in NY. Thank you for your article.

This is a nice article and I do love Russ and Daughters but please do not treat “Traditional Jewish Foods” as monolithic. It is aggravating to see food from one very particular lineage (European Jews living in New York City) spoken of as representative of all Jewish food. To some of us, you’re not serving our traditional food unless it’s kubaneh, or buñuelos, or khoresht, or harira. It’s only since American Jews began immigrating to Israel in larger numbers that bagels have even become available there - around the same time that bacon has. So please, be careful about what you characterize as “Traditional Jewish Food”.

We so appreciate you taking the time to read our article and for letting us know how it left you feeling, Dee. Your comment is taken to heart. It’s never our intention to diminish a culture or overlook the richness of its breadth by focusing on a specific area of its tradition. Our goal in this story is to share the story of Russ and Daughters, and the food they’re passionate about making: dishes that are authentic and traditional to them. You have our sincere apologies if our story feels like an attempt to stand in for a much bigger and more diverse Jewish food tradition, which it isn’t. Again, we truly appreciate and value your feedback!