Shortening vs. butter in baking

Vegetable shortening can be a mysterious ingredient. I’d never plunged my spatula into the cloud-like stuff until a few months ago when I was baking in the test kitchen. Growing up, I always reached for a trusty kitchen staple instead: butter. But recently as I whipped up batches of cookies and a plethora of pies, I began to wonder about the difference between using shortening vs. butter in baking. 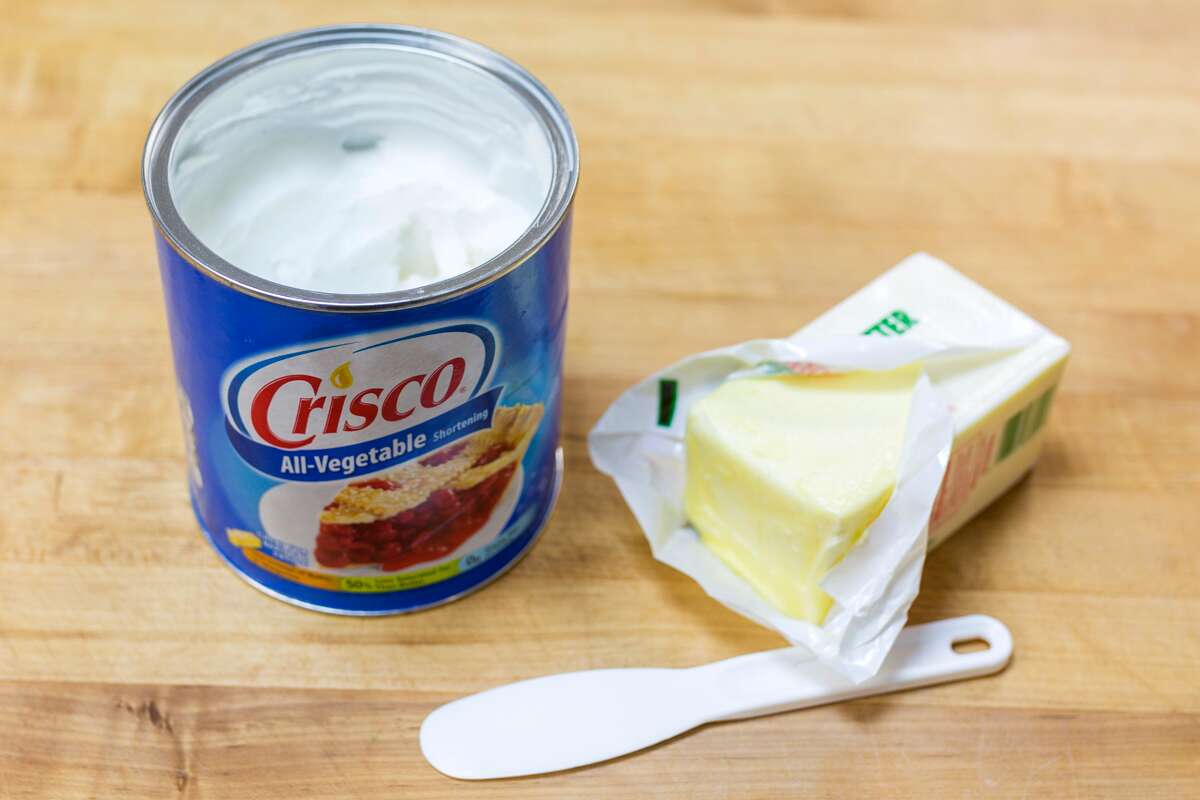 Butter is a familiar ingredient. We know it comes from cows, and it’s delicious on toast. It’s made by churning fresh or fermented cream, and then separating solids from the liquid (which is then sold as buttermilk). It’s about 80% butterfat, plus 18% water and 1% to 2% milk solids.

Shortening on the other hand is a bit more complicated, starting with the name. “Shortening” actually refers to all fats and oils, but what we’re talking about here is hydrogenated vegetable oil shortening (such as Crisco).

This kind of shortening is typically made from soybean, cottonseed, or palm oil. It goes through a special process called hydrogenation so it remains semi-solid at room temperature. It’s 100% fat, unlike butter.

Even though these ingredients are clearly different, shortening and butter are often used interchangeably in recipes with acceptable results. But if you’re looking to make the very best baked goods, like so many of us King Arthur Flour bakers, which should you use?

Shortening vs. butter: the ingredient to reach for depends on what you’re baking. 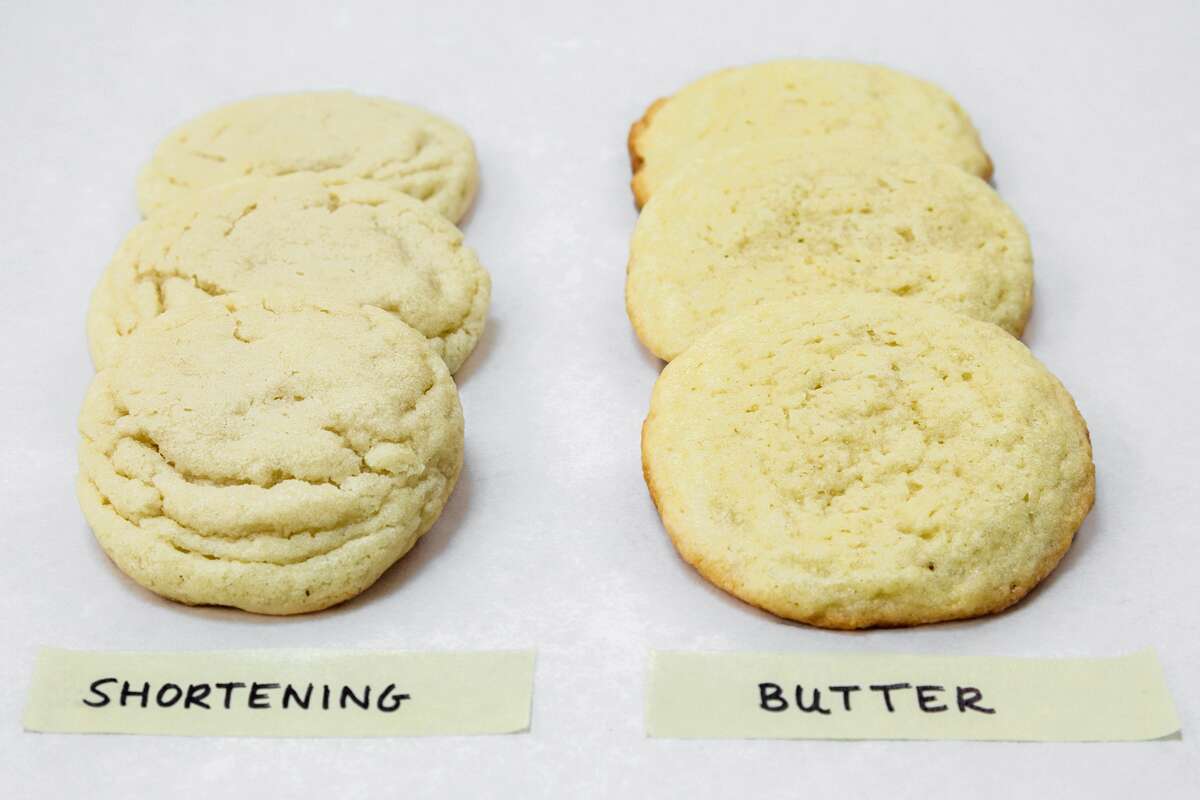 If you’ve ever had a tray of cookies morph into one huge mess in the oven, it’s time to listen up.

Cookies made with butter, especially high-sugar recipes, tend to be flatter and crispier than cookies made with shortening. Because of butter’s low melting point, the dough tends to spread during baking before the structure sets.

To see just how different the spread would be, I baked two batches of our Self-Rising Crunchy Sugar Cookies (one made with all butter, one with all shortening), for another shortening vs. butter in baking comparison.

As predicted, the cookies made with shortening spread less and remained slightly rounded, thanks to the higher melting point. These cookies had what’s called a “short” texture. You might recognize this slightly sandy, crumbly feel as the characteristic texture of shortbread. (Yum.)

If you’re having problems with cookies spreading, you might try replacing some of the butter with shortening. Keep in mind this is just one reason why cookies spread; there’s a multitude of factors you can adjust if you’re committed to using butter for its rich flavor. 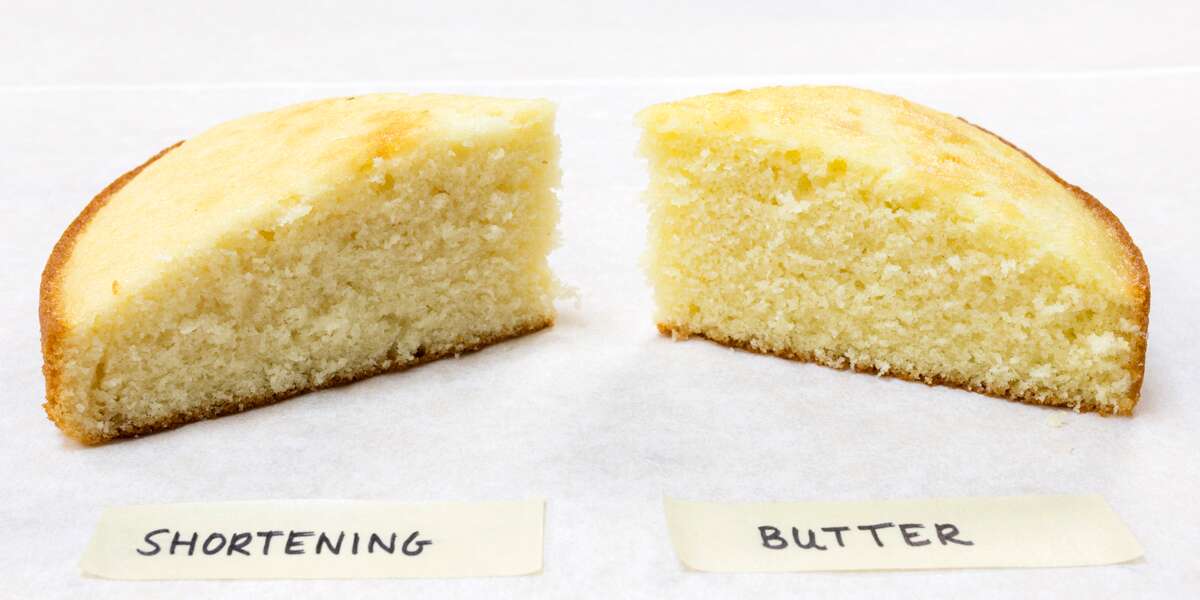 What about cake? We know shortening adds tenderness since it's 100% fat, so some of us curious bakers started wondering what would happen if it was used to make cake.

Would the cake rise in the oven? Or would it collapse? Would it have a large crumb? We needed to find out!

Our Back-to-Basics Yellow Cake was the recipe of choice for this experiment — it’s a standard butter cake that uses a cup of fat. One cake was baked using all butter, while shortening was the fat of choice in the other.

The result? The difference between shortening vs. butter was underwhelming when judged by appearance alone. The height was comparable, as were the color and crumb.

The texture of the cake made with shortening, however was quite pleasant — tender, lofty, and light. When shortening is creamed with sugar, it traps air molecules, which helps to leaven cakes and make them tender. A fork slides through a slice of shortening-based cake easier than one made with butter.

You might be thinking, then why don’t more cake recipes call for shortening?

Flavor. What’s a cake if it doesn’t taste great? The rich creaminess of a classic butter cake is hard to replace. 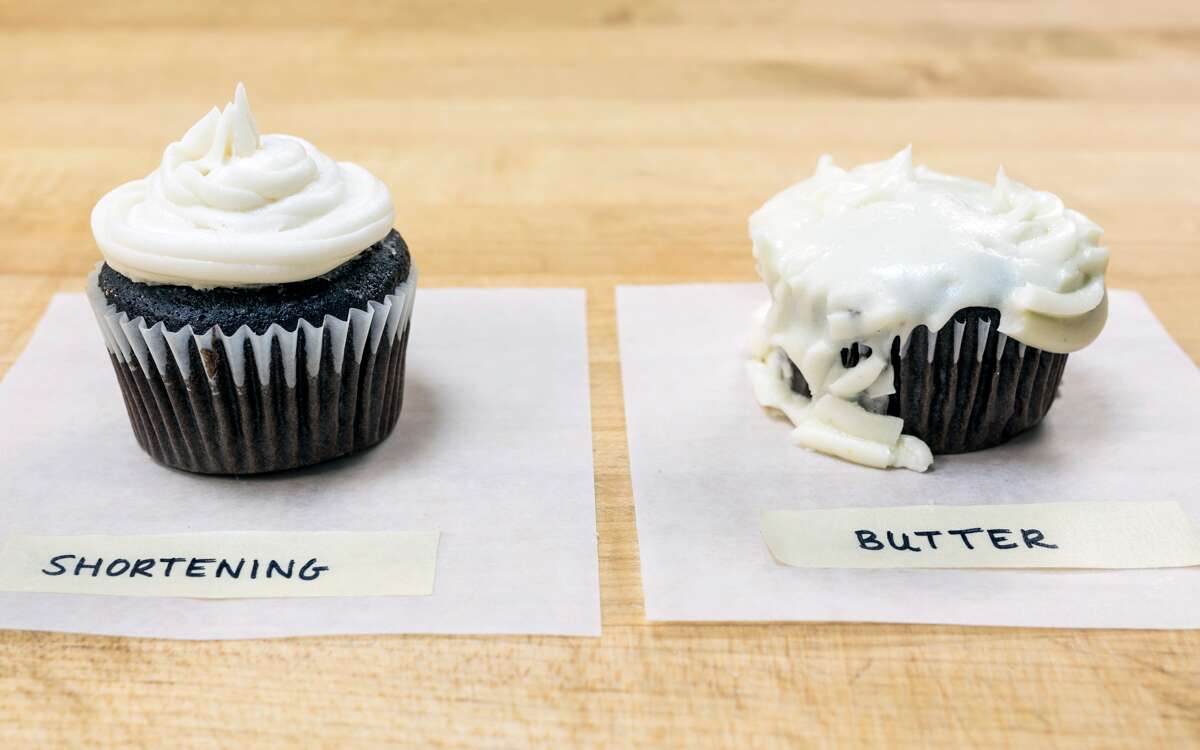 It might seem like butter would be the obvious choice when making buttercream frosting, and if you’re going for best flavor, it’s a worthy option.

But shortening might have its place in your frosting recipe too. Because it’s 100% fat, it helps make buttercream more stable than an all-butter buttercream, which can begin to separate at warm temperatures.

It’s a sad sight to see a beautifully piped cake wilt in the sun as the baker stands by watching helplessly. We replicated hot, summery conditions (when so many of us cake bakers are called upon) by putting frosted cupcakes in a low oven for 10 minutes.

The results were drastic: the all-butter buttercream melted and spread down the sides of the cupcake, while the buttercream made with shortening held its shape.

But you trade stability for flavor.

So if heat isn't a problem, you might want to stick with a Classic Buttercream recipe. 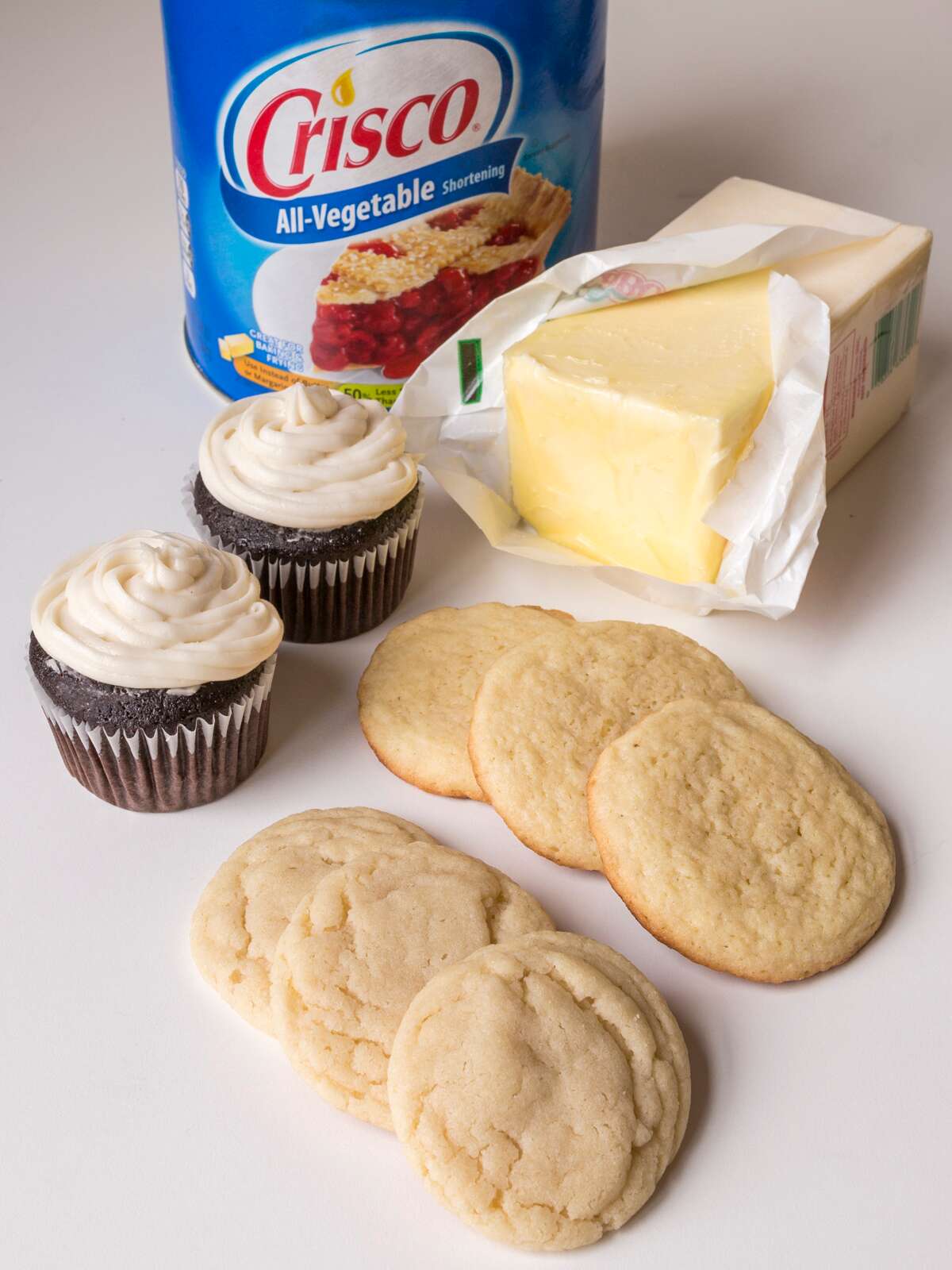 Making the choice: Shortening vs. butter in baking

It’s clear that both shortening and butter have their virtues and vices. They can both be used to make delicious, tender baked goods that are full of flavor and richness.

There might be certain cases when it just makes more sense to use butter, like in a classic cake perhaps. There are other times when a can of Crisco is now the thing I reach for: when making pie crust, frosting, and even sandwich cookie filling.

The virtue of butter vs. shortening is a passionate topic for many bakers, and we explore both here for their distinctive baking qualities. Each baker brings unique needs and perspectives to the table, and it’s our sincere hope everyone will choose ingredients that best embrace their personal goals.

A special thanks to fellow employee-owner Nic Doak for taking the photos for this blog.

Shortening in any food tastes terrible. Used as a way to oil your baking pans ruins otherwise delicious baked goods. The flavor is very obvious for me. Shortening also is particulary unhealthy. I can not imagine why someone would trade stability for flavor for something you eat. It sounds crazy and a little unstable decision to make. Properly chilling your cookie dough is part of the older recipes. Properly chilling a frosted dessert is too. Also beating eggs properly and separately can lighten your cake and make it lighter and fluffier. It sounds like we have too many people looking for quicker easier ways to look like a good baker.
How about use both ? Does that help?
Hi, Curt. We often use both, depending on the texture we're aiming for. Often we'll use half shortening in pie crust, working that in first, and half butter left in bigger chunks. The shortening helps the dough hold its shape a little better, and the butter tastes great and gives us flakier results. Susan
Any thoughts on using shortening instead of butter in your sourdough cracker recipe? My bloodwork suggests I need to lower my intake of saturated fats...
Beth, it will change the texture of the crackers, but not in a bad way, it's just different. The only real downside to switching to shortening is that the flavor of the crackers will be blander. Adding herbs or spices to your crackers easily overcomes that issue, though. Happy baking! Kat@KAF
Thank you! This really helped me.. Wanted to make sugar donuts..shortening was called for..but didn't have any. Figured I could use butter.. I guess not..because it does make a difference.
is this post not taking comments anymore?
Hi Rod. All of our blog articles are still accepting comments. The most recent comment on this post is from 12/29/18. If you're having trouble viewing the comments, we'd recommend clearing your cache/cookies on your internet browser or give a different browser a try. Annabelle@KAF
Planning to make ‘Baking Powder Biscuits’ from scratch for my Dad. I don’t have any shortening in the house, but the original recipe calls for it. What is your opinion/experience on what butter would do to the biscuits? Thank you!
You can use butter, Anne! They won't be quite as tender, but they'll have great flavor and they'll brown more. Chill them in the fridge for 20 to 30 minutes before baking. Annabelle@KAF