This cake is the berries!

I recently visited my cousin Kris at her mountaintop home in southern New Hampshire. We sat out on her deck, acorns dropping like mini-bombs around us, and talked about family, movies (she and her husband are film producers), and food.

After a bit Kris went inside, and emerged moments later with cups of coffee and a cake. Always on the alert for promising new recipes, I started to pry. "What's that? Looks good. What's in it?" I said.

"Oh, it's those Italian plums on top of cake. Truly, this is about the only dessert I ever make. Why bother with any others, I think, when this is so good?" said Kris.

Further discussion revealed it was a recipe from Marian Burros' The New Elegant But Easy Cookbook. What's more, it's been featured on American Public Media's radio show, “The Splendid Table,” with host Lynn Rosetto Kasper.  APM's Web site quotes Kasper as commenting, “Because of reader demand, this recipe has been published in one form or another in the New York Times almost every year since I went to work there in 1981.”

Serendipitously, King Arthur Flour sponsored a company outing at a local orchard last weekend. Families gathered on a crisp, impossibly blue-and-gold September morning to enjoy hay rides, cider and fresh doughnuts, and acres and acres of apple trees and raspberry bushes, all heavily laden with fruit. The pickin's were easy, to say the least – perfect for kids. 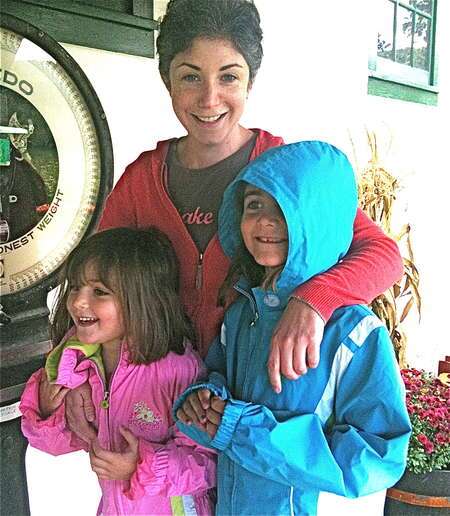 Our online commerce director, Halley, stepped onto the apple scale for a group weigh-in with daughters Bella and Daisy. 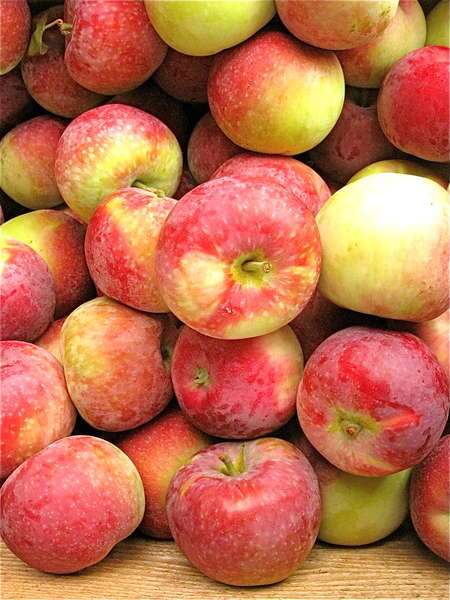 They picked a TON of apples. Well, enough for pie and a huge crisp, anyway. 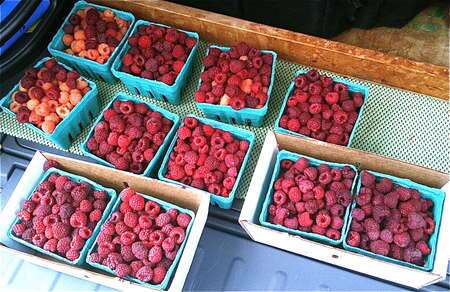 Me? I went for the raspberries. My mom and I picked 11 pints. 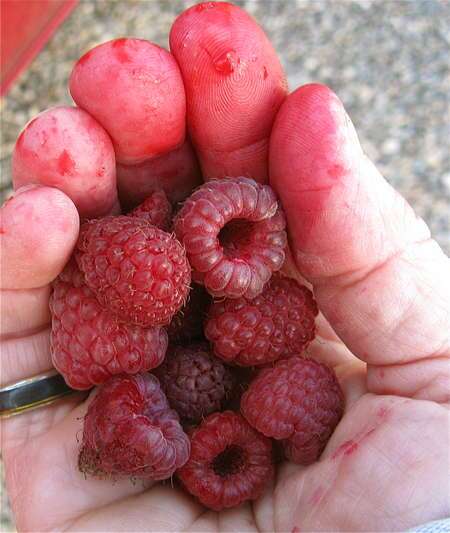 There's nothing like late-summer berries, but they're as fragile as they are fleeting. I froze all but 2 pints, scooping out a cup to go on top of this Late Summer Berry Torte, along with a cup of blueberries I'd picked up at another farm stand. 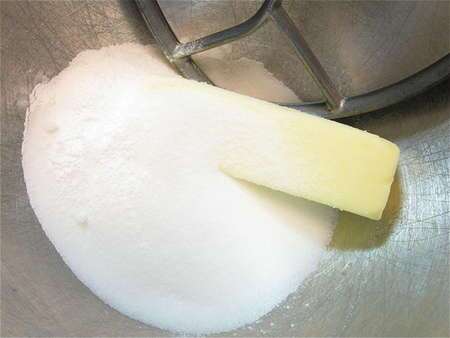 Put the below in a bowl: 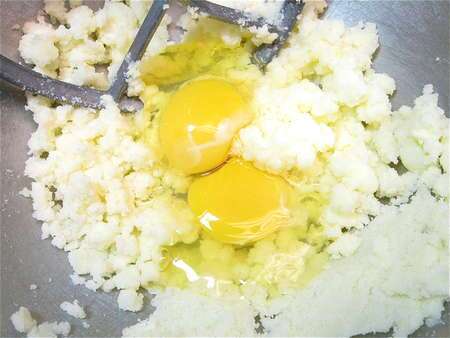 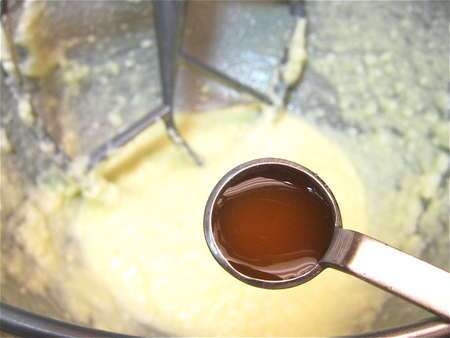 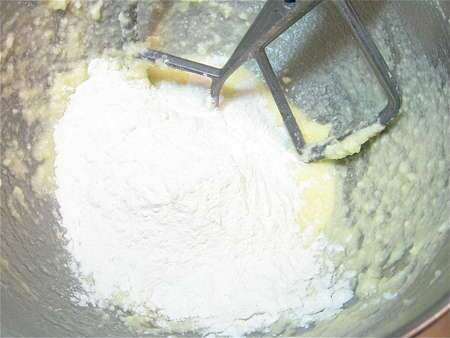 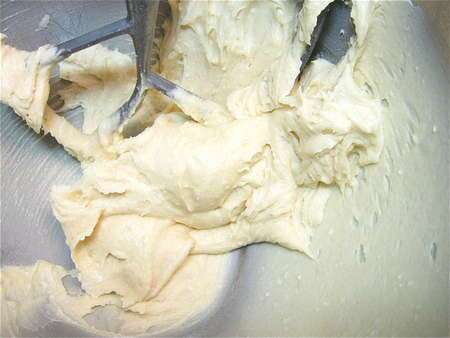 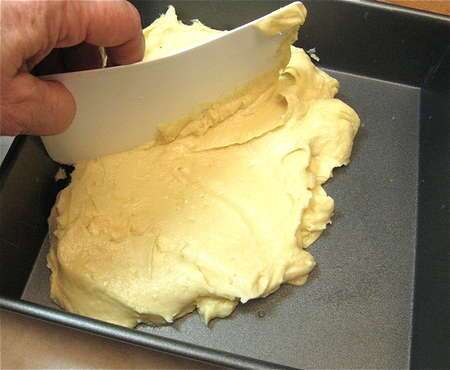 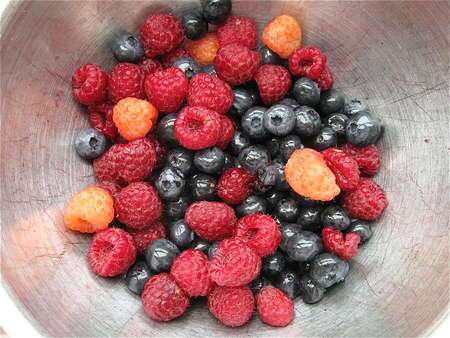 The original recipe calls for 24 halves pitted Italian prune plums. Kris says she uses 2 cups of whatever fruit she has on hand. I chose 1 cup each raspberries (red, and golden); and 1 cup blueberries. 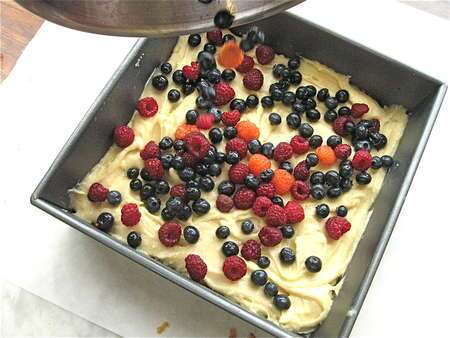 Sprinkle the berries (or spread the fruit) evenly atop the batter. 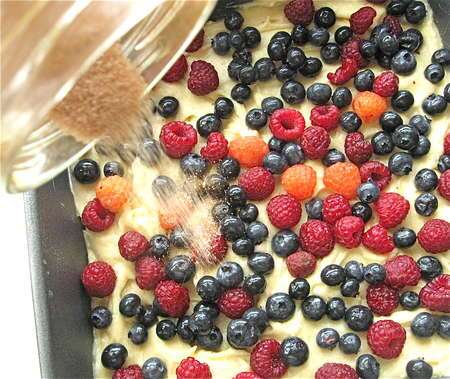 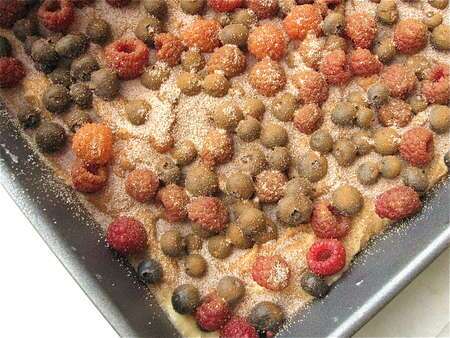 It looks like you're using a lot, but don't worry; it's all good. 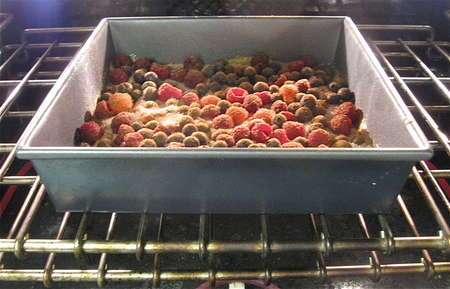 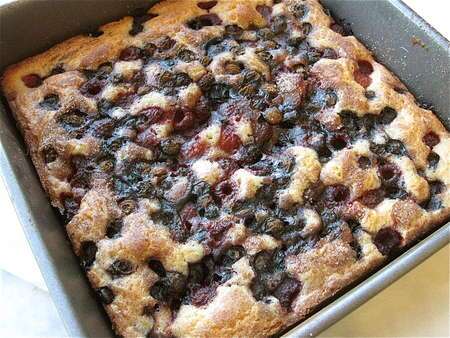 A cake tester inserted into the center will come out clean, and the parts of the cake showing between the berries will be golden brown. 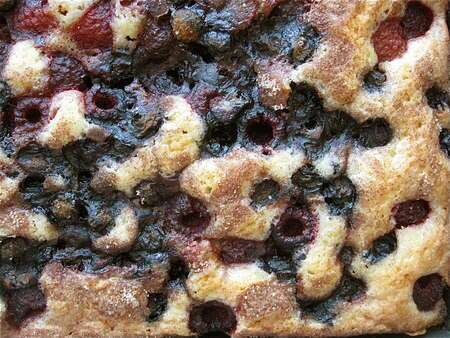 Serve with whipped cream, if desired.  Sounds pretty desirable to me, so let's whip up some cream, using a trick I just learned: 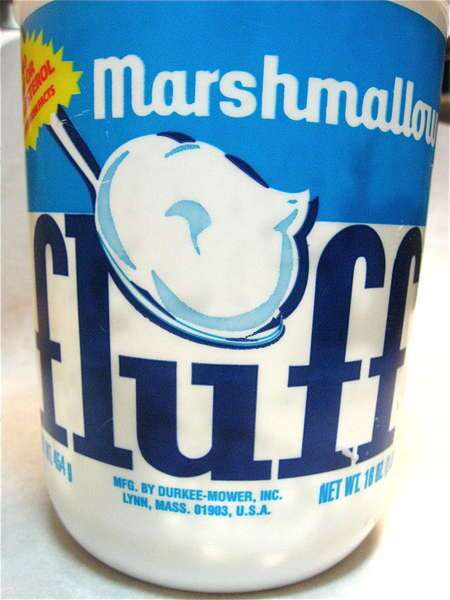 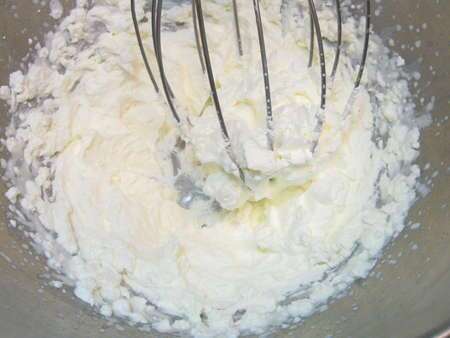 Whip 1 cup heavy cream till it holds peaks. This cream actually got away from me; it's too stiff. Absolutely edible, it just doesn't look smooth and pretty. 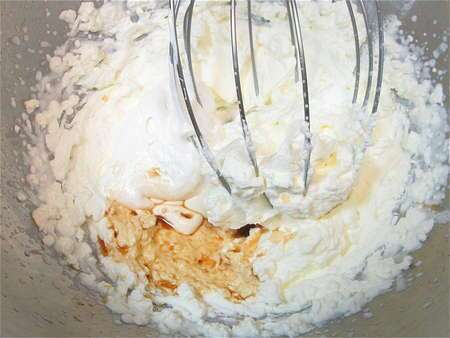 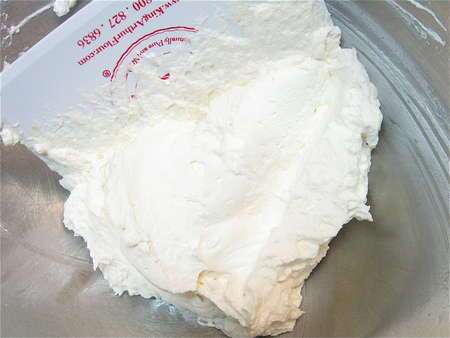 Mix till thoroughly combined. The Fluff helps stabilize the whipped cream, meaning you can whip it up ahead, then refrigerate till it's time to serve. It also adds just the right amount of sweetening, yielding a whipped cream where cream is the hero, not sugar. 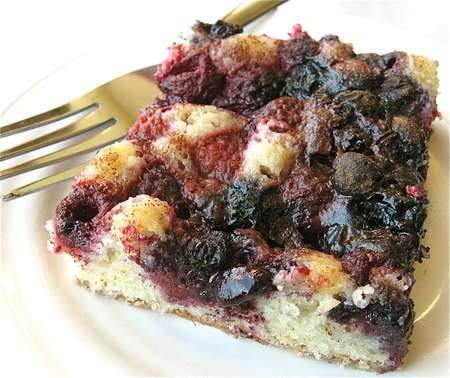 And here's the result of our berry-picking labors. How sweet (and fresh) it is!

The recipe says 1/2 tsp salt but your notes here say 1/4 tsp salt - did I miss something? Thank you!

Hi there, Christina! What has likely happened here is the recipe was updated and this update was missed in this blog that also features our Late Summer Berry Torte recipe. We'd recommend using the 1/2 teaspoon of salt. Thanks so much for bringing this to our attention, we'll get this corrected so other bakers aren't confused too. Happy baking!

Would love to make this cake, but am out of fresh fruit...was wondering if I could sub re hydrated blueberry infused cranberries. I bake a lot of breads for friends and neighbors with these cranberries, and would like to give this cake as a thank you for supporting me with all of their orders.
Go for it, Christine! We think that'll work just fine and make a wonderful thank you gift. Annabelle@KAF
Way too sweet for me, as I used almost all blueberries. The berry mixture needs more tart berries, such as the raspberry mix used in the article, or cut back on the sugar. The recipe doesn't say whether the butter is salted or not; I assumed salted, and added an additional ¼ tsp salt, since I always bake with unsalted butter. The cake part is very good and I'll try it again, but the sugar topping needs adjustment for sweeter fruit.
Marilyn, thanks for your helpful comments on this recipe. In our recipes we normally assume unsalted butter, unless otherwise specified, but I'm sure an extra 1/4 teaspoon of salt didn't hurt anything. Barb@KAF
I prepared this recipe using blueberries and plan to prepare it again for guests. All I can say is ... YUM!!!
I made this torte with splenda plus I used apples and cranberries with walnuts and I doubled the recipe. I also made it with peaches and blueberries plus the splenda. It's a five star dough. I have since made it with many other fruits and nuts. It's great for people with diabetes like me. I love KING ARTHUR recipes. enjoy! shana
I have a quick question on the whipping cream/marshmallow fluff mixture. After the cream is whipped to hold peaks, and you add the marshmallow fluff and vanilla, do you continue to use the mixer whisk to incorporate the fluff or do you do it with a spatula or bowl scraper? In the picture, you show a bowl scraper, but it doesn't seem like it would be possible to get it mixed well enough that way. Thanks! Folding in the fluff and vanilla is best. Otherwise, the whites would become over beaten. Elisabeth
The cake looks and sounds yummy, however looks can be deciving. How can we actually comment without baking and tasting this. I tried one of the recipies that looked amazing, yet it was terrible. I have no comment at this time, but I will try to bake this one When/if you have a bad experience with one of our recipes, I hope you call our baker's hotline - 802-649-3717. They're SO good at walking you through the recipe and finding out what might have gone wrong... Best of luck on this one. PJH