"The best graham crackers ever. One bite, and you'll want to eat the entire bagful."

So says Seneca. A member of our King Arthur Flour extended family via her mom, Jenn (our catalogue's art director), Seneca is 8 years old. And she knows a good thing when she tastes it. No dissembling; no hesitation. 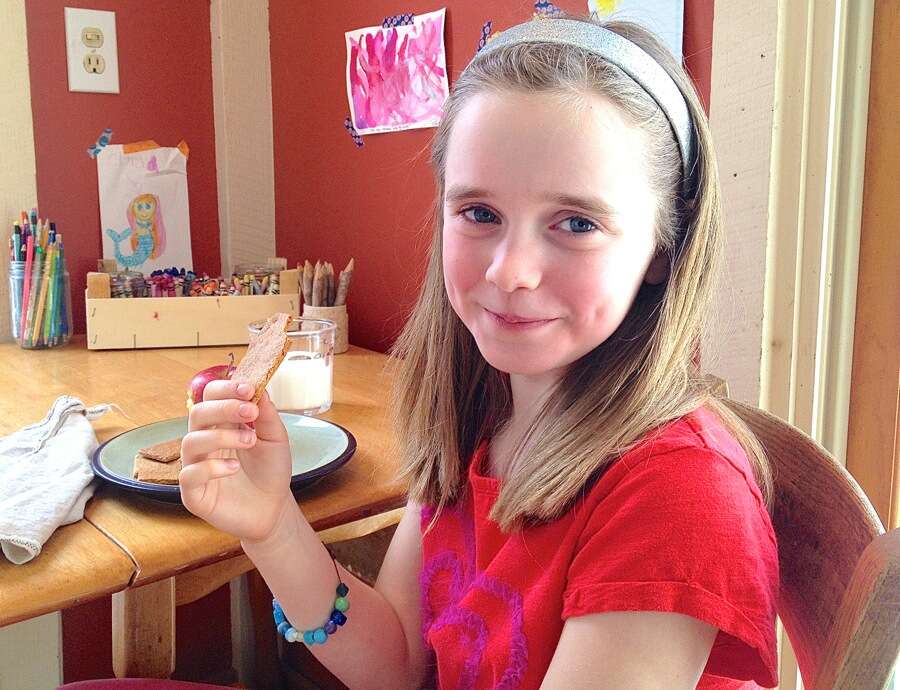 Just "the best graham crackers ever."

Which warms my heart. Despite its nutritional attributes, whole wheat flour is often a hard sell, flavor-wise. Especially when it comes to kids, who can taste "healthy" in their cookies a mile off – and summarily reject it as "different."

If you have a child, you've seen "the face," right?

You hand little Chloe a whole wheat chocolate chip cookie. Expecting her usual happy chocolate chip cookie experience, she takes a bite. Happy fades, replaced by quizzical, followed by the "ewwwww" look, with an accusatory, dagger-laden "how could you" for good measure at the end. 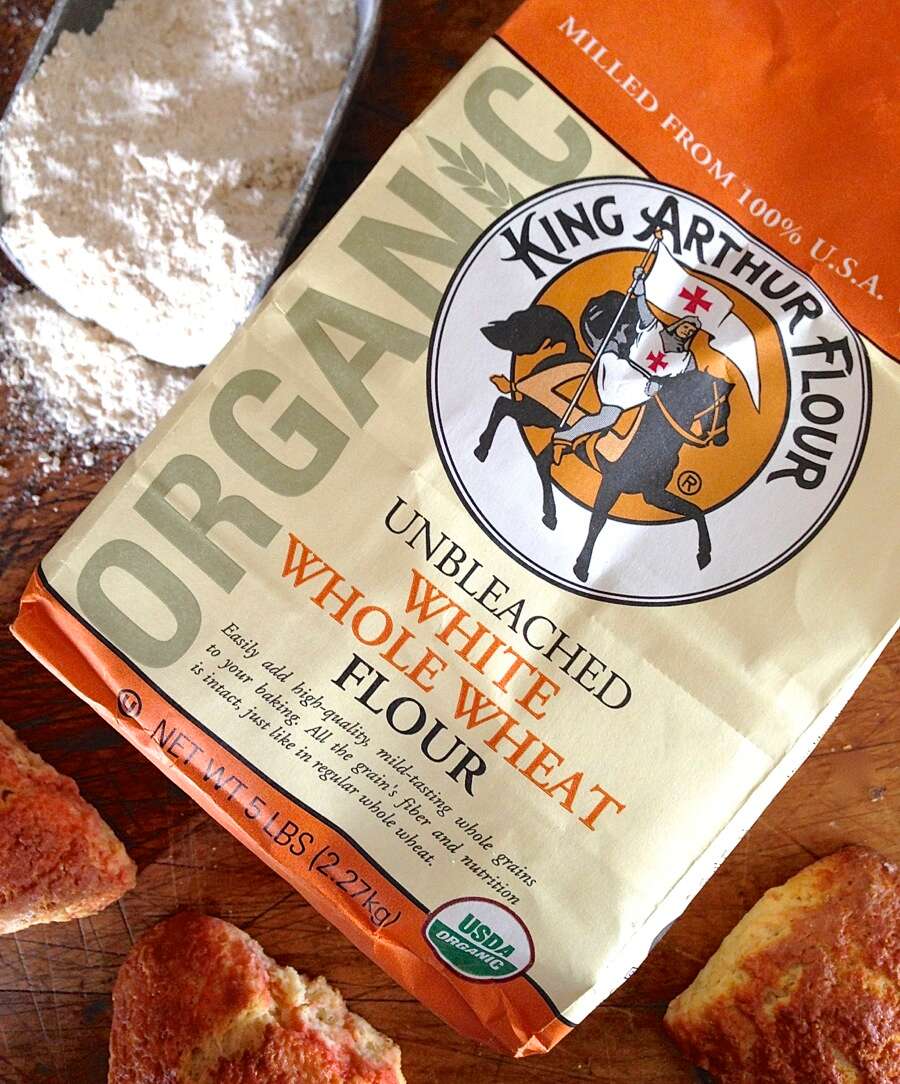 But our white wheat flour – ground from nutritionally equivalent white wheat berries – is a milder, lighter-colored flour, one that's easier to slip past your most discerning audience… the kids.

Graham crackers were an original poster child for whole wheat flour. Invented by preacher Sylvester Graham back in the mid-19th century, these 100% whole wheat crackers were part of Graham's drive to get Americans to eat healthier. He advocated a vegetarian diet of natural, unadulterated foods – including whole wheat baked goods of all kinds. 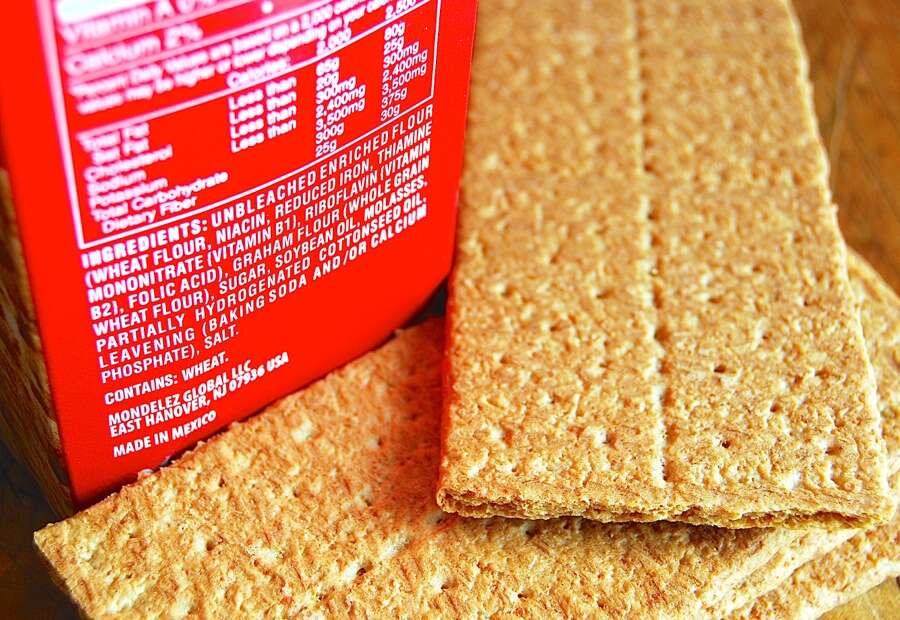 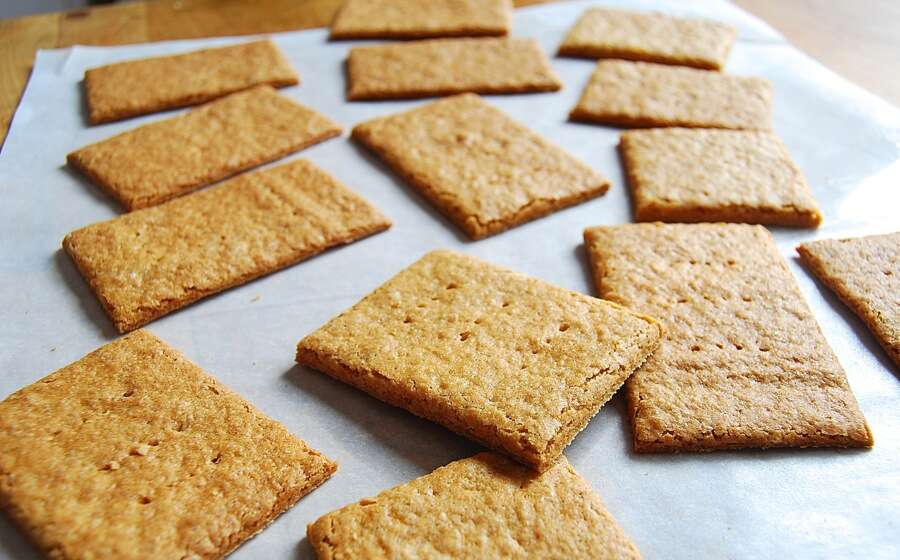 Which is why I decided to salute Rev. Graham with a recipe for 100% Whole Wheat Graham Crackers.

Crackers that – thankfully, if Seneca is any indication – won't result in the "ewww" face.

Preheat the oven to 300°F. Lightly grease two baking sheets; if you have parchment, you'll be using it to roll, transfer, and bake the crackers, so you won't need to grease your baking sheets. 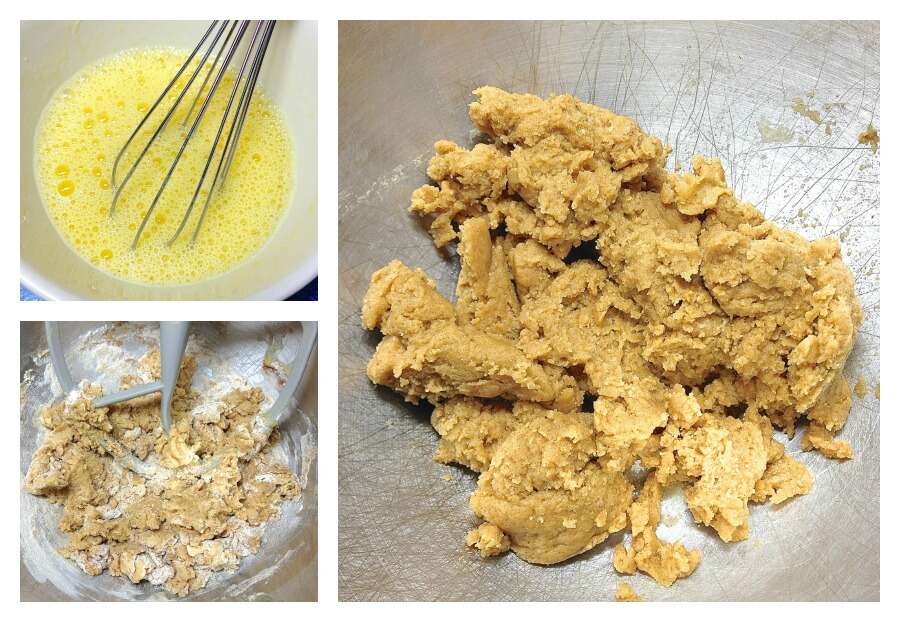 *Baker's ammonia, a traditional ingredient known for imparting super light/crisp texture to cookies and crackers, will make the crunchiest crackers. Baking powder will work, too, though it'll produce a slightly harder (rather than crisp) cracker.

In a separate bowl, whisk together the following. If you're using baker's ammonia, dissolve it in 1 tablespoon of the water before adding it to the remaining liquid ingredients.

*Orange juice tempers the sometimes assertive flavor of whole wheat; we recommend it if you're baking for kids, especially with traditional whole wheat flour. OJ substituted in this small amount won't make your crackers taste orange-y, just less "wheaty". Use all water if desired.

Add the liquid ingredients to the dry mixture, stirring to form a cohesive dough.

Divide the dough in half, and shape each half into a flattened block. 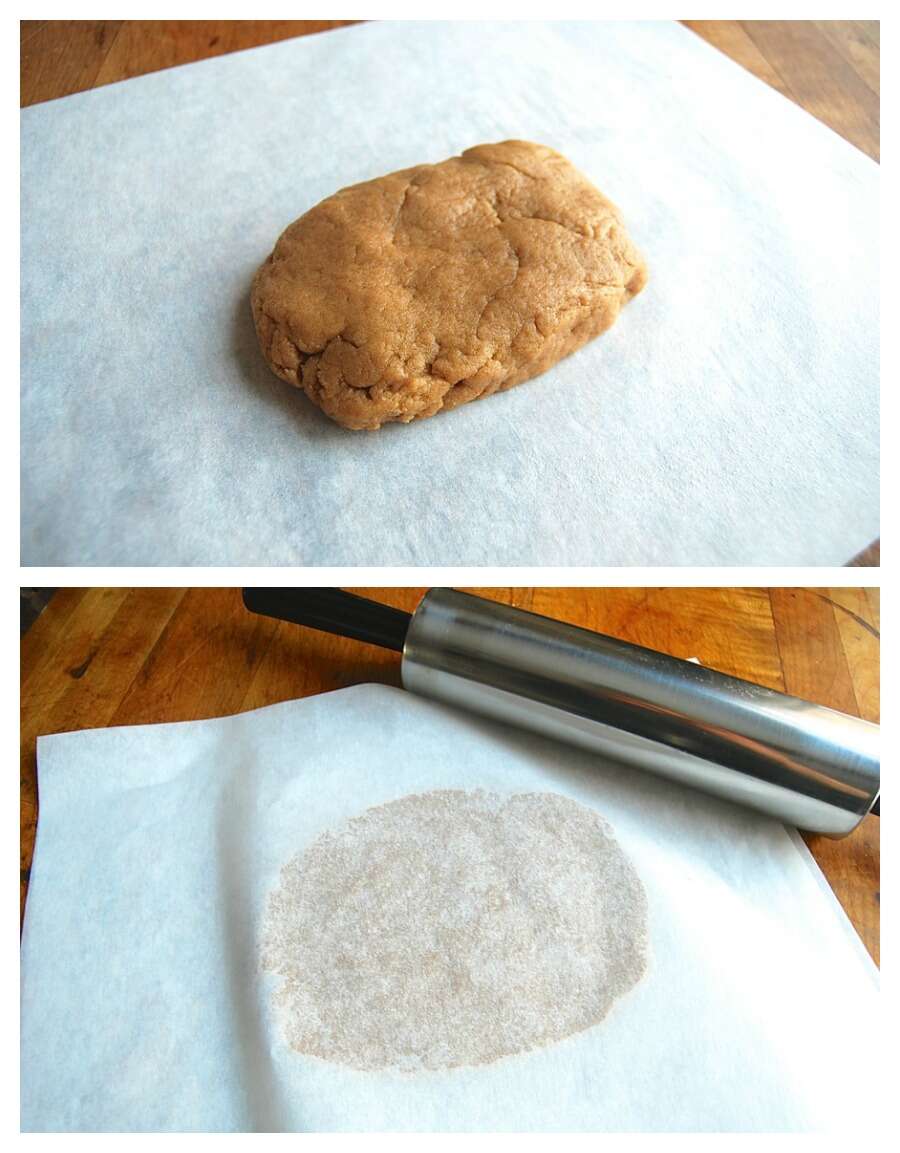 Working with one piece of dough at a time, roll it between two pieces of lightly greased parchment or waxed paper. 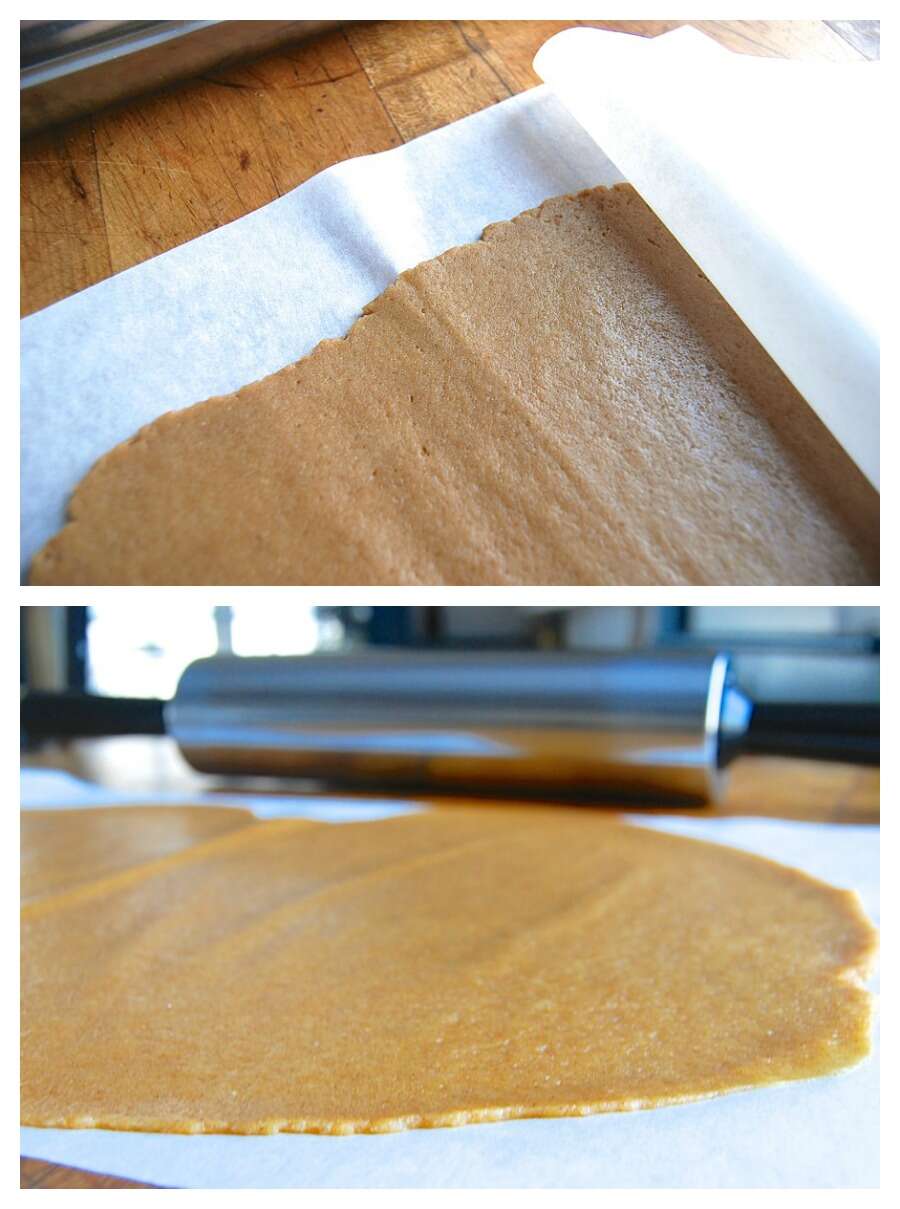 Roll the dough until it's 1/16" thick. Try to keep the dough a uniform thinness throughout, and make sure the bottom piece of parchment remains flat.

Rolling the dough ultra-thin (1/16") is key to the crisp, light texture of these crackers. If you can't roll the dough that thin, your crackers will be sturdier, and you'll need to bake them a bit longer.

See the parchment wrinkle in that top photo? You want to avoid that... 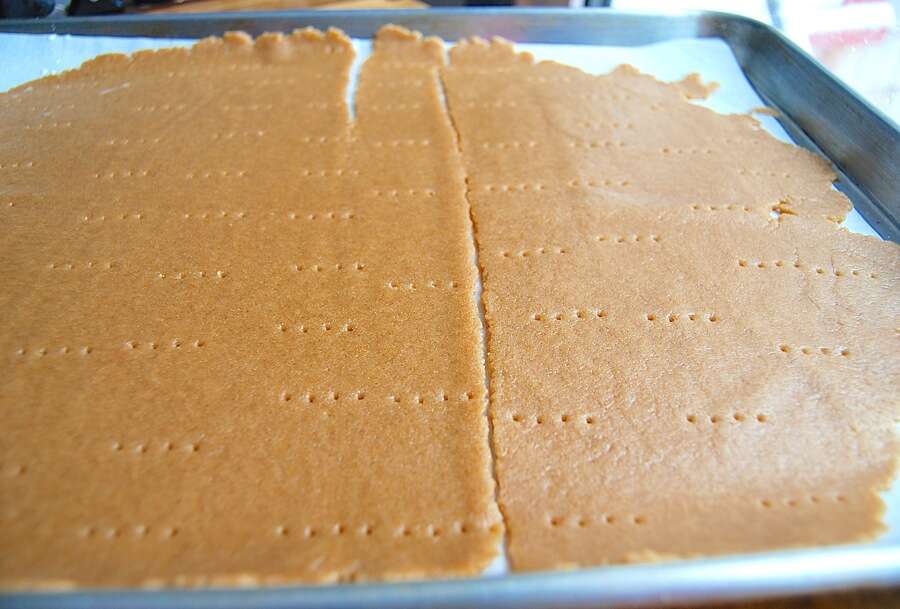 ...because here's what happens if you let the bottom sheet of parchment fold over on itself: you get a crack in your crackers.

Repeat with the remaining piece of dough.

No, you didn't miss a step; we're not cutting the crackers quite yet. I mean, who wants to try to move 1/16"-thick crackers from paper to pan? Thanks to one of our blog readers for the following cracker-cutting suggestion – it's genius. (And I apologize, I can't find your comment/name anywhere!)

First, bake the crackers for 10 minutes. 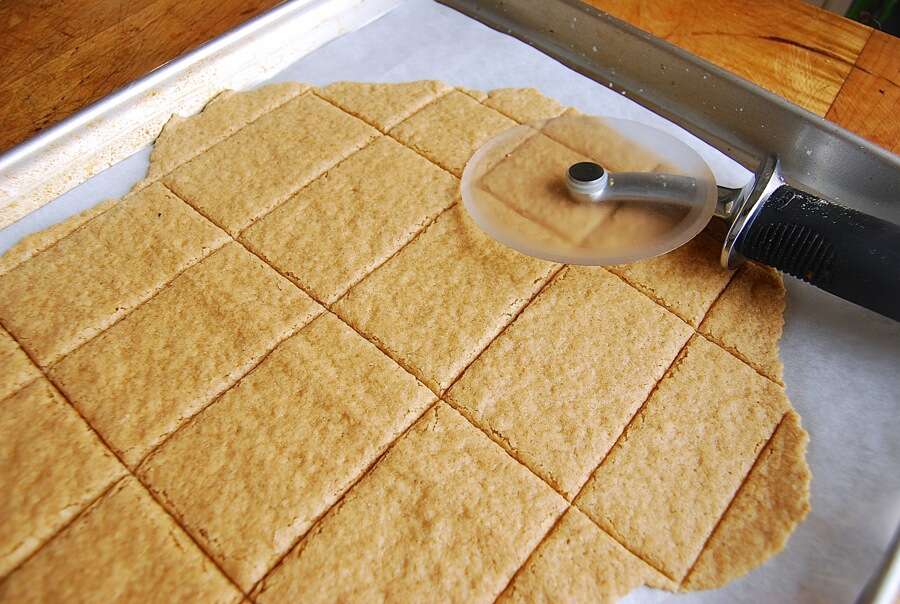 Remove them from the oven, and use a rolling pizza wheel or sharp knife to cut the sheets of dough into 3" x 2" rectangles; don't separate them, just cut them. You can use a fork to prick the crackers at this point, if you like, for that distinctive graham cracker look. 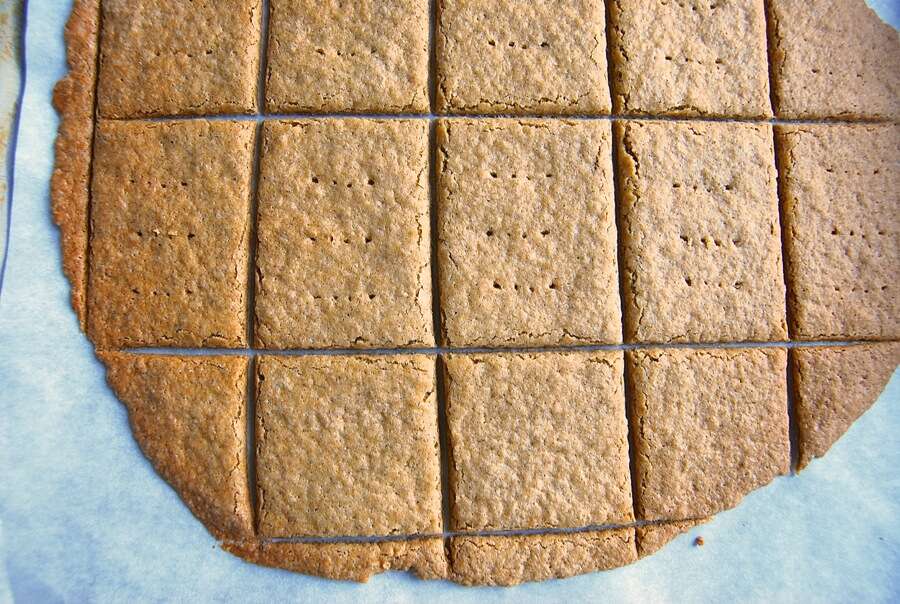 Return the crackers to the oven, and continue to bake for 20 to 25 minutes, until they're brown around the edges. Overall, they should be a shade darker than when they went into the oven; and they shouldn't be at all soft or pliable.

Turn off the heat, and open the oven door wide. After 5 minutes or so, when much of the oven's heat has dissipated, shut the oven door, and let it cool down completely with the crackers inside; this will help them become as crisp as possible.

Remove the cooled crackers from the cold oven, and wrap them airtight. They'll stay good at room temperature for several weeks. 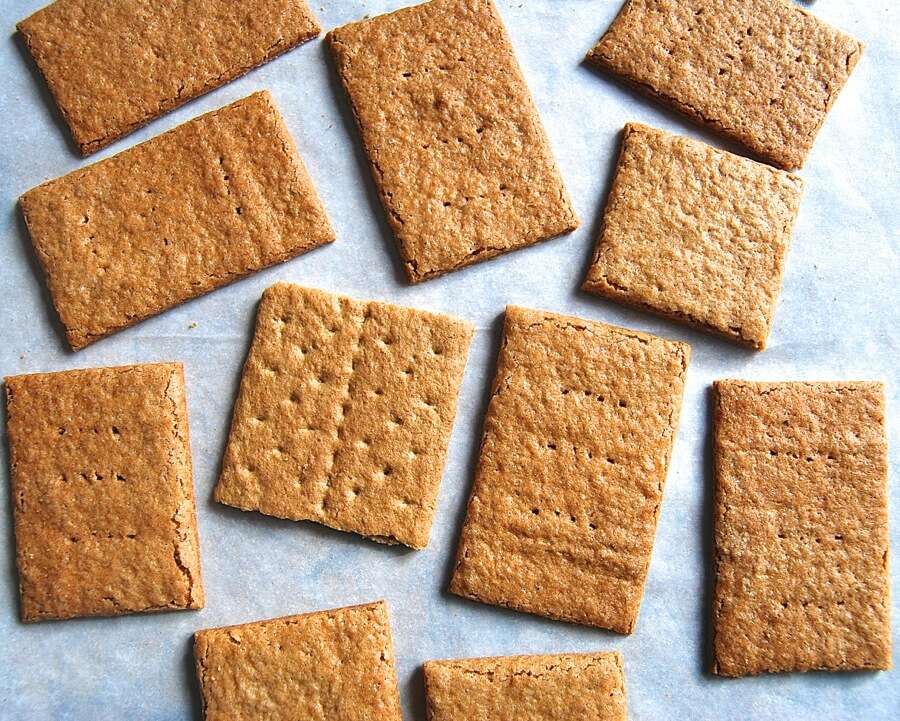 Now, I'm not saying these homemade graham crackers taste exactly like store-bought. There's a certain graham cracker flavor I've been unable to emulate – though looks-wise, they're a close match for packaged crackers. (See the manufactured cracker in the center there? It's the one with all the holes).

But judging them on their own merits, they're good. VERY good. 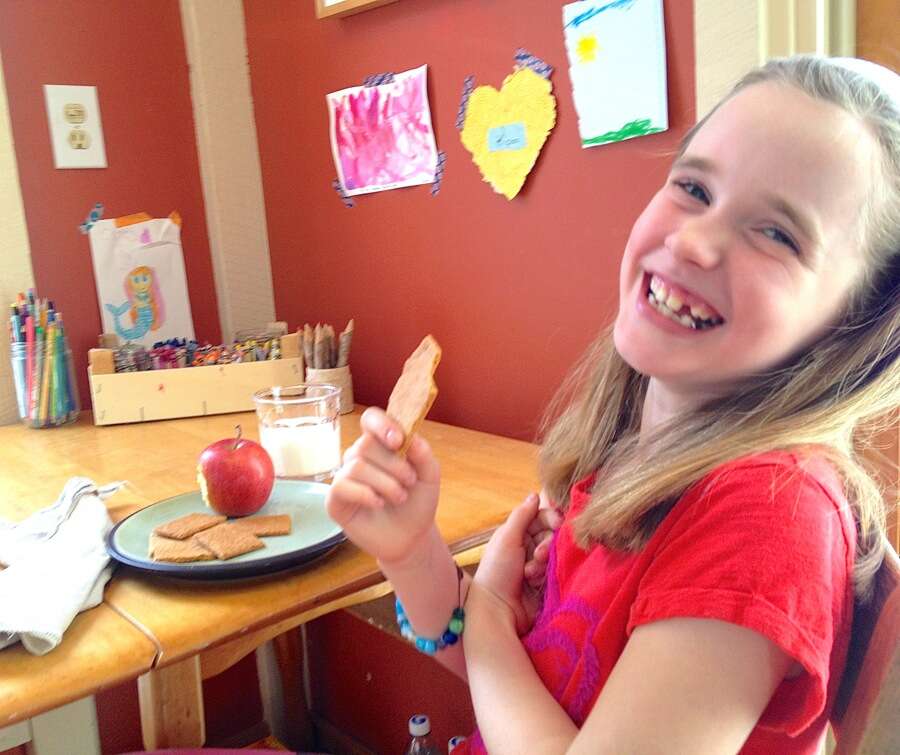 Dan, I don't think the molasses will do it; I actually tried that in a previous recipe where I was trying to get graham cracker's distinctive flavor. But if you want to give it a try, maybe substitute 1/4 cup molasses for 1/4 cup of the sugar. You'll want to cut the water down, as well; start by adding 1 tablespoon of water, then add more if needed. Let us know how they come out – good luck! PJH
Can't find oven temp in recipe.
Kay, the temperature is 300°F - you'll see it right before the grid of pictures showing how to mix up the cracker dough. Enjoy! PJH
Kay, The oven temperature is 300 degrees. JoAnn@KAF
As the box indicates the presence of "graham flour" a.k.a whole wheat, maybe substituting some of the White Whole Wheat with regular Whole Wheat would give the "grahamy flavor" you were looking for? I may try these, I have that Baker's Ammonia and was waiting for just the right inspiration.
Anna, thanks so much for the suggestion. Unfortunately, I don't think that's the answer. The flavor of regular whole wheat isn't "graham cracker-y," but instead rather assertively "wheaty" - potentially a bit tannic/bitter. I think it has more to do with the soy oil, as Biscoff cookies, which taste like graham crackers, also include soy. But I've never been able to quite figure it all out. I'm glad we were able to provide you with a good recipe with which to test your baker's ammonia! PJH
I baked graham crackers last weekend using KA graham flour. They were very good. Maybe that is what is missing from you getting that certain graham flour flavor. My youngest son and I loved them and ate them right up.
Gina, that's certainly worth a try - thanks for the suggestion. Glad you and your son enjoyed them! PJH
Ah, good old Sylvester Graham. He would probably flip his wig if he could see the current version of the graham cracker and its use in such decadent desserts as S'mores and pie crusts! Looks like a great recipe. I keep a bag of the White Whole Wheat in my freezer and always substitute a bit of the regular All Purpose flour in my baked goods.
Thanks, Kalisa! Maybe old Sylvester would be flipping his wig in a good way. You never know. Barb@KAF