Looking for the ultimate in fancy holiday sweet breads, guaranteed to impress? Who better than our catalogue recipe developer/food stylist, Charlotte, to create the bread of our dreams!

This stunning Cinnamon Star Bread is blowing people away with how pretty it looks and tastes, and also how deceptively easy it is to create.

Seldom do I make things that are ACTUALLY difficult to make. I don't have the patience. Rather, I look for those recipes whose finishing touches really set them apart (and make me look awesome!)

Charlotte really pulled out all the stops on this sweet loaf – and she was kind enough to recreate her steps so I could share them with all of you!

This pull-apart style holiday bread is a show-stopping riff on a classic cinnamon bun. As it bakes, the cinnamon-sugar filling caramelizes and gives the bread a wonderfully sweet and crunchy coating, while the interior remains soft and tender.

To make the dough:

Combine all of the dough ingredients and mix and knead — by hand, mixer, or bread machine — to make a soft, smooth dough. Place the dough in a lightly greased bowl, cover, and let it rise for 60 minutes, until it's nearly doubled in bulk. 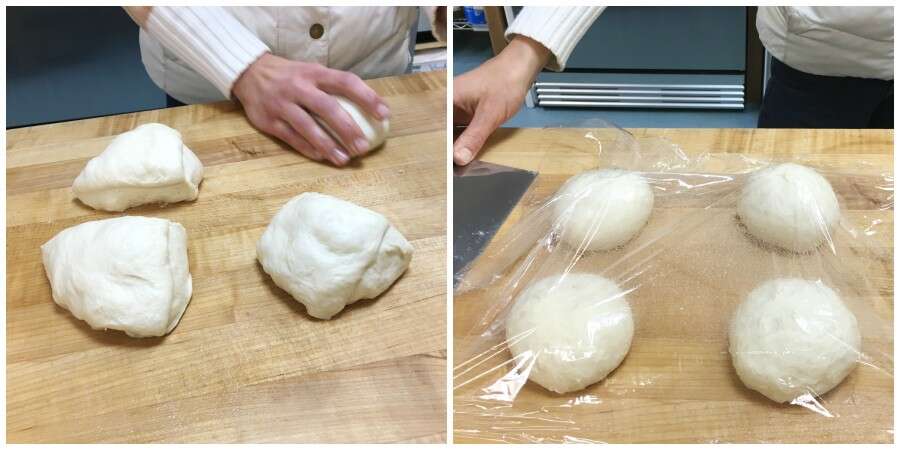 Gently deflate the dough, and divide it into four equal pieces. Shape each piece into a ball, cover the balls, and allow them to rest for 15 minutes.

Prepare your filling ingredients while they rest. In one small bowl: 1/2 cup (99g) sugar and 1 tablespoon cinnamon or 2 teaspoons Vietnamese Cinnamon (or substitute 1/2 cup Cinnamon-Sugar Plus). In another small bowl: 1 large egg, beaten until frothy.

On a lightly greased or floured work surface, roll one piece of dough into a 10" circle. Place the circle on a piece of parchment, brush a thin coat of beaten egg on the surface, then evenly sprinkle with 1/3 of the cinnamon-sugar leaving 1/4" of bare dough around the perimeter. 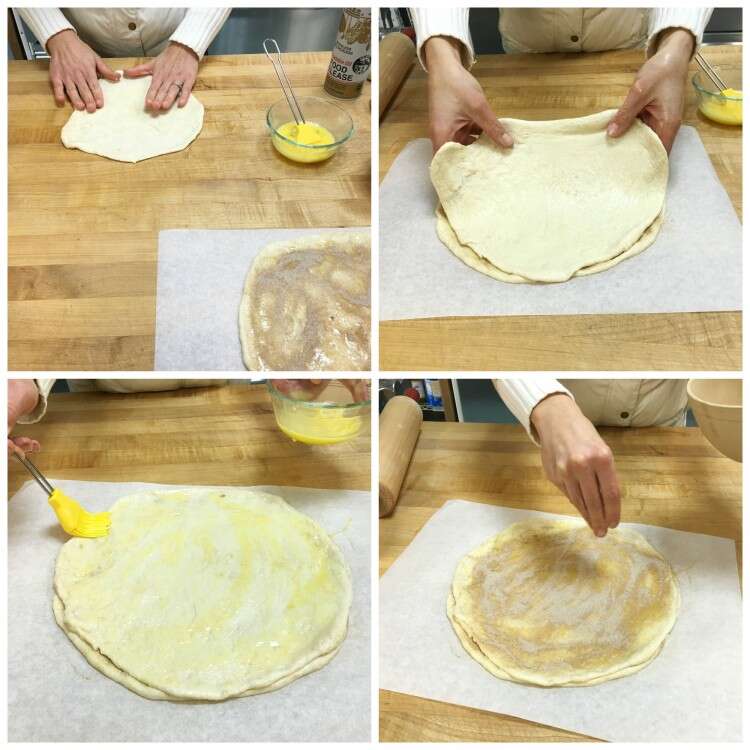 Roll out a second circle the same size as the first, and place it on top of the filling-covered circle. Repeat the layering process with the remaining two pieces of dough — egg, cinnamon sugar, dough circle — leaving the top circle bare.

You won't use all the egg. Save what's left; you'll need it later. 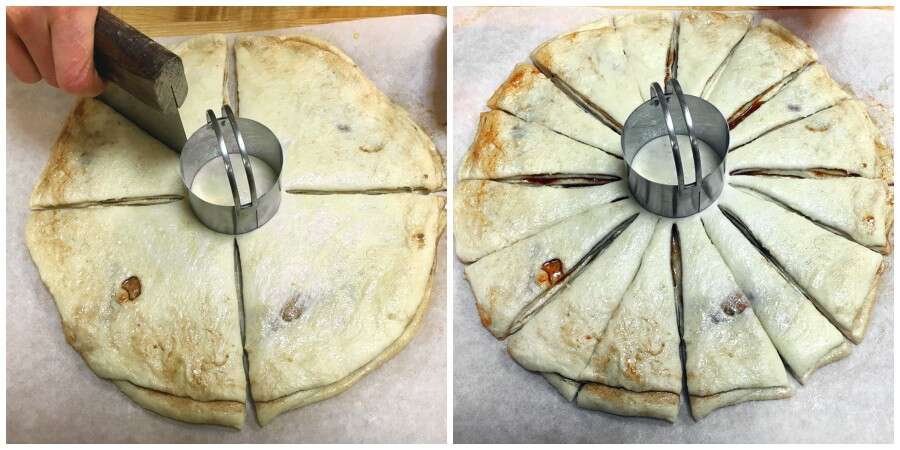 Set a 2 1/2" to 3" round cutter in the center of the dough circle as a guide; don't cut through the dough! With a bench knife or sharp knife, cut the circle into 16 equal strips, from the cutter to the edge, through all the layers. 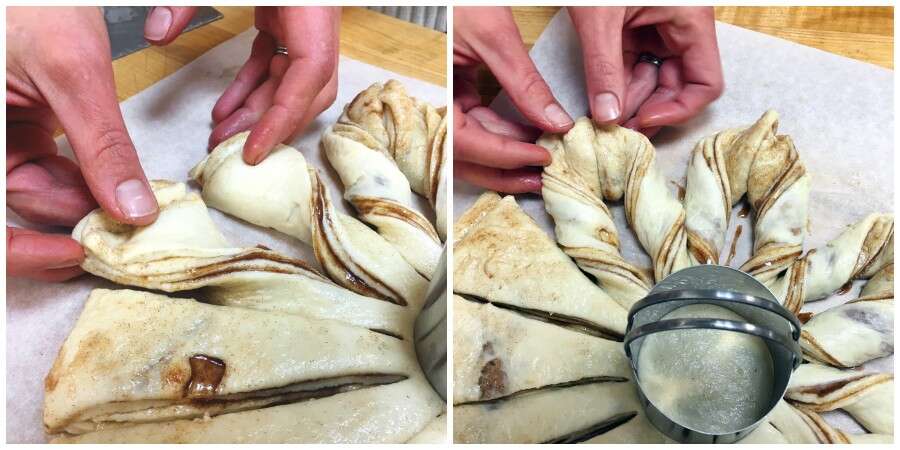 Pick up two adjacent strips and twist them away from each other twice so that the top side is facing up again. Repeat with the remaining strips of dough so that you end up with eight pairs of strips. Pinch the pairs of strips together to create a star-like shape with eight points. 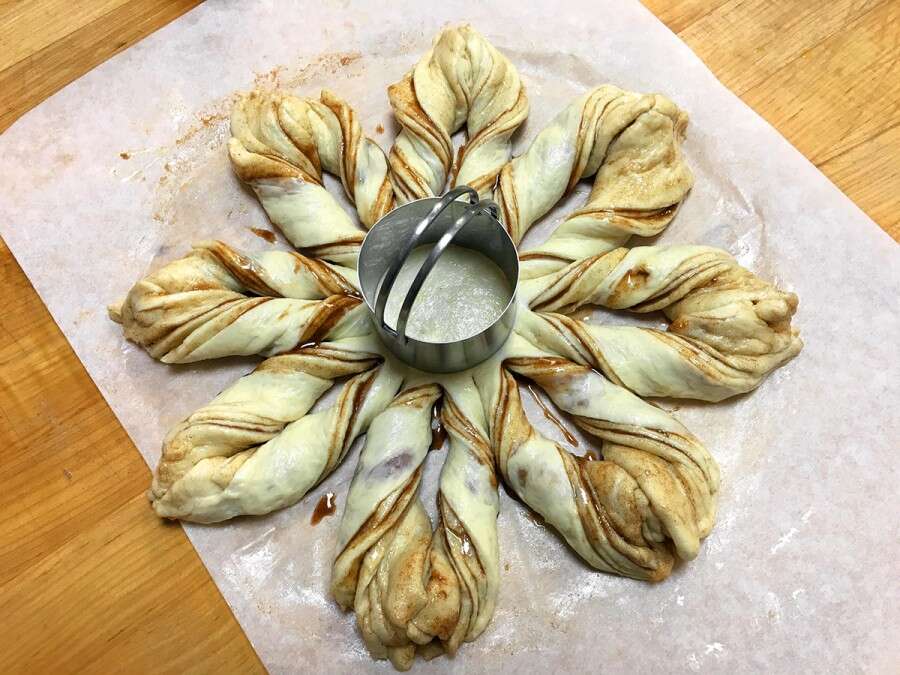 Remove the cutter. Transfer the star on the parchment to a baking sheet. Cover the star and let it rise until it becomes noticeably puffy, about 45 minutes. 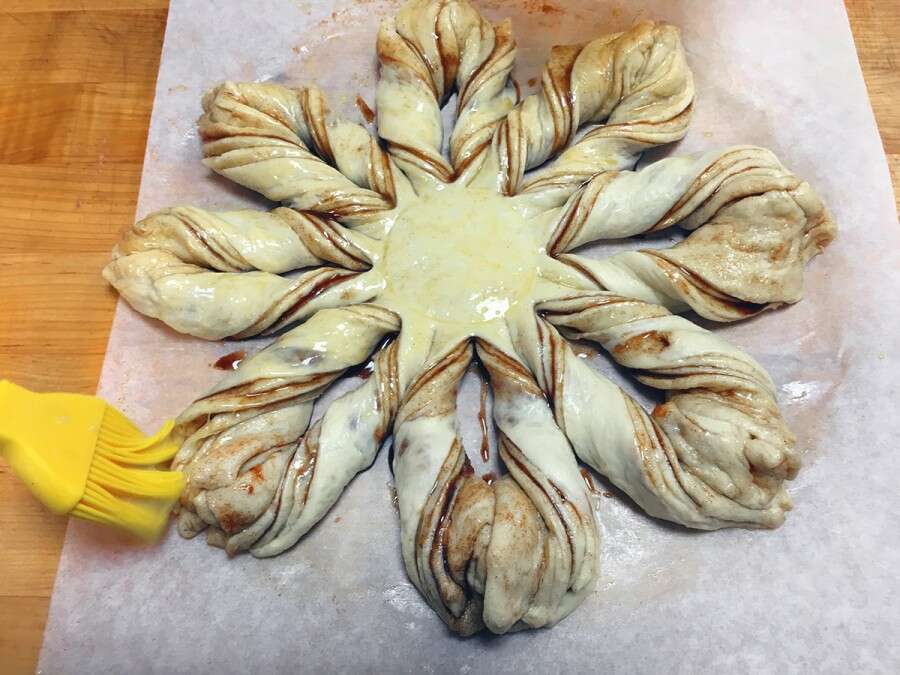 Bake the star for 12 to 15 minutes, until it's nicely golden with dark brown cinnamon streaks; the center should register 200°F on a digital thermometer. Remove the loaf from the oven and allow it to cool for about 10 minutes before serving. 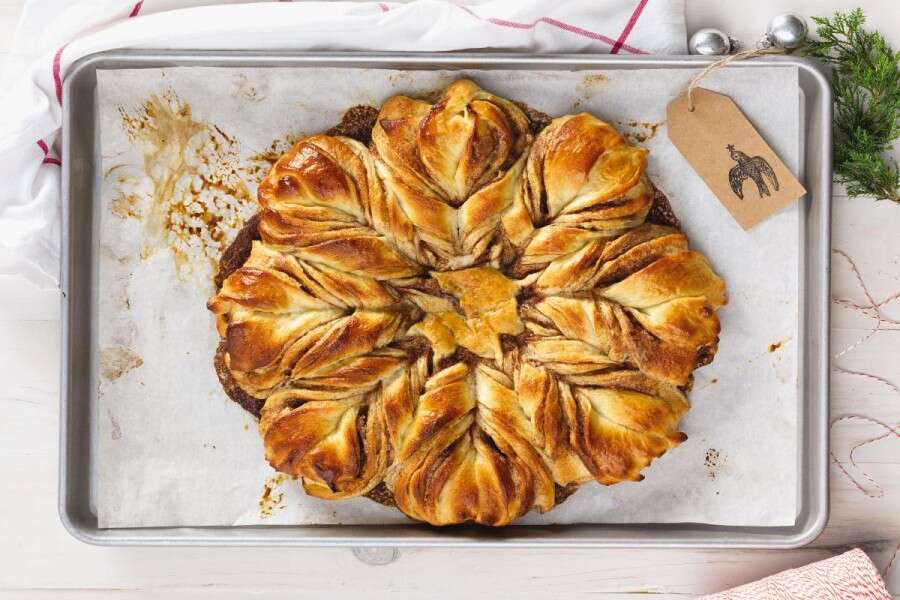 So there you have it – easier than you thought, right?! And almost too pretty to eat!

We hope you bake and enjoy this lovely bread with your friends and family this holiday season.

I have tried this recipe twice, both times it came out looking like the picture, but my dough did not rise. I put all dry ingredients in a bowl, than the butter and water. Should i follow a different sequence? If it doesn't rise will that alter the taste of my bread?
The order of the ingredients doesn't matter as much as the freshness of the yeast and the amount of flour you're using. Be sure to test your yeast for freshness and measure your flour correctly. These things should help with the rise. If your dough doesn't become puffy at all, the final texture will be quite heavy and dense. It's worth troubleshooting the rise! Kye@KAF
I would like to make these as gifts, at least 5 loaves. I saw that a commenter asked if they can be refrigerated overnight and baked in the morning, and the answer was yes. But the few times I tried to refrigerate breads overnight, they kept rising. Any ideas on what I am doing wrong?
Alba, the trick is to replace the final, room temperature rise with the longer, cooler rise in the fridge, rather than attempting to refrigerate after the loaf has already risen at room temp. While your dough sits overnight in the fridge, it will rise, but much more slowly than it does at room temperature, which is why it's ok to leave it for so much longer. Hope this helps to clarify. If you have additional questions, feel free to give our Baker's Hotline a call at 855-371-BAKE. Mollie@KAF
On the page with just the recipe and not the blog, http://www.kingarthurflour.com/recipes/cinnamon-star-bread-recipe , the picture shows a star that has more distinct and more pointy star points. It looks like instead of pinching the ends of the strips together, one is placed on top of the other. And, it looks like the strips in the picture on the other webpage are twisted TOWARD each other, not away from each other. (You can see this by looking at the bottom star tip and seeing a "V" shape to the twist instead of an upside down "V".) What is the best way to get the more pointy and distinct sections look to the star - putting the ends together, overlapping them, etc. or is there something else to the technique?
Amy, we've found that the best way to achieve a pointy-tipped star is to indeed pinch the ends together. Instead of pinching them downwards and making them flat, pinch the edges of the end of the strips together so that they create a secure seam, on end, like a column. This will keep the tip intact while the bread proofs. The strands tend to look like they are overlapping as the dough rises. (And yes, the initial twist, whether it's inwards or outwards will determine the shape of the inner "V," but both techniques create the larger star effect. Choose whichever you prefer.) Kye@KAF
Can I make this at night and bake in the morning?
Hi Erica, Yes, just like overnight dinner rolls or cinnamon buns, this can be shaped and kept in the fridge overnight before baking. ~ MJ
I made this 2 days before Christmas, baked and cooled it, wrapped it in plastic and foil, froze it, and transported it from Buffalo to Boston by car, in a cooler. On Christmas Eve, we let it defrost in the refrigerator and warmed it up on Christmas morning. It was spectacular! And, for those who don't want to worry about tracking down potato flour, I substituted 2 T cornstarch and the Star rose and baked perfectly.
Thanks about your potato flour note! Usually I find it in the stores at Passover only, which is a Springtime holiday.