The King Arthur Flour Company marks its 225th anniversary this year. And we're celebrating by exploring some of America's favorite recipes, decade by decade. Join us on this fascinating stroll through American food history.

When did the artisan bread movement start?

Well, it depends on your definition of artisan bread. Picture the early history of our country. Most Americans make their own bread at home – mixing the dough, shaping it by hand, turning it into a pan, and baking the loaves in the family's wood- or coal-fired oven.

Then, with the invention of the bread slicer in 1928, everything changes. Missouri's Chillicothe Baking Company sells its first loaf of Kleen Maid sliced bread on July 7, 1928.

Wonder Bread, an American standard since the early 1920s, quickly changes from whole to sliced loaves. And soon "cookie cutter" bread – each loaf, each slice identical to the next – becomes the norm.

Fast forward to the 1960s. The Beatles supplant Pat Boone. Cardigans and bobby socks give way to granny dresses and mini-skirts. The hippie movement is born.

By the 1970s, many of us erstwhile hippies are marrying and starting families; and while perhaps dropping the love beads, we carry with us some of the movement's more positive pastimes: baking our own bread, for example. 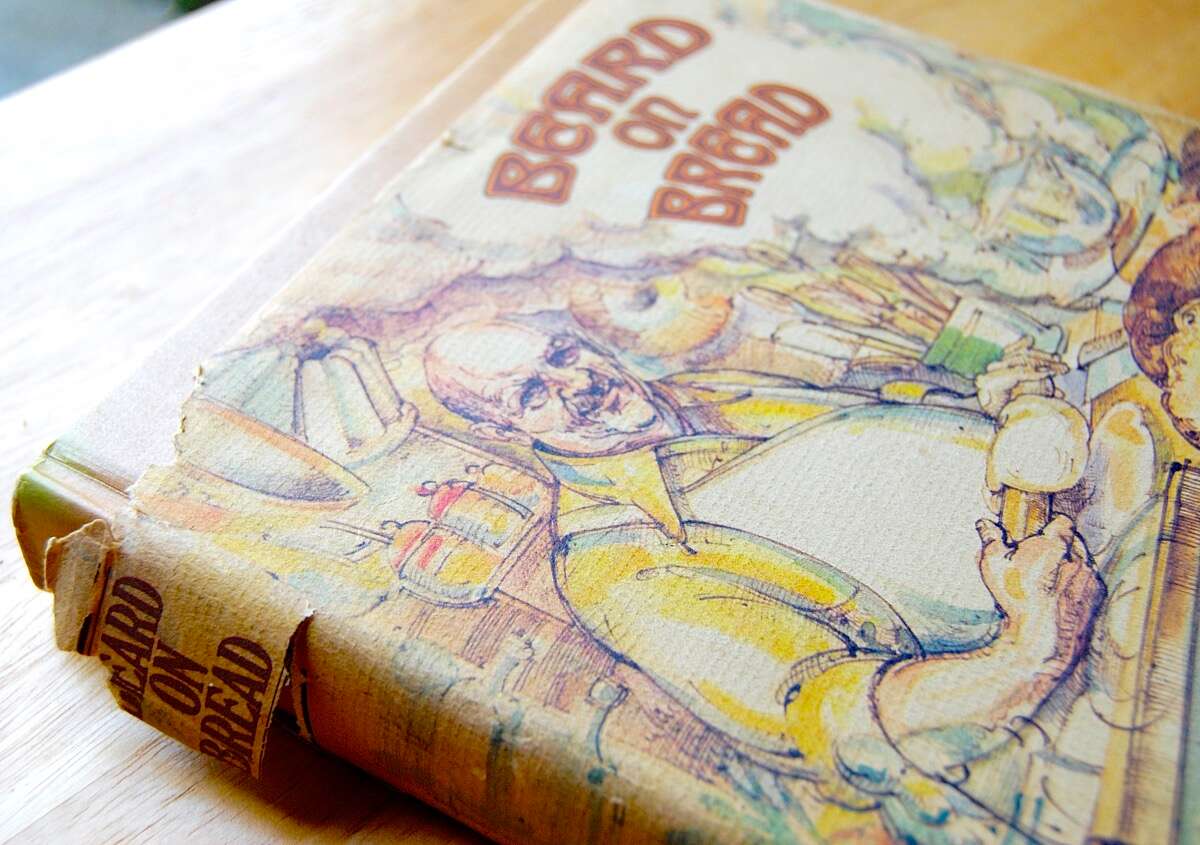 While many ’70s bread bakers swear by the famous Tassajara Bread Book, I turn to James Beard, an original American foodie.

To quote the book jacket of 1973's Beard on Bread, "Crusty on the subject of ersatz products commercially sold as bread, rapturous as he describes a homemade loaf that has the right texture and a good 'nose,' relaxed and masterful about the various techniques of kneading, shaping, and baking, James Beard is so persuasive about the simple and joyous art of breadmaking that once you give yourself up to this book and plunge your hands into the dough, you will become a confirmed breadmaker for life."

I plunge my hands into the dough. And the experience does indeed turn me into a confirmed breadmaker for life. 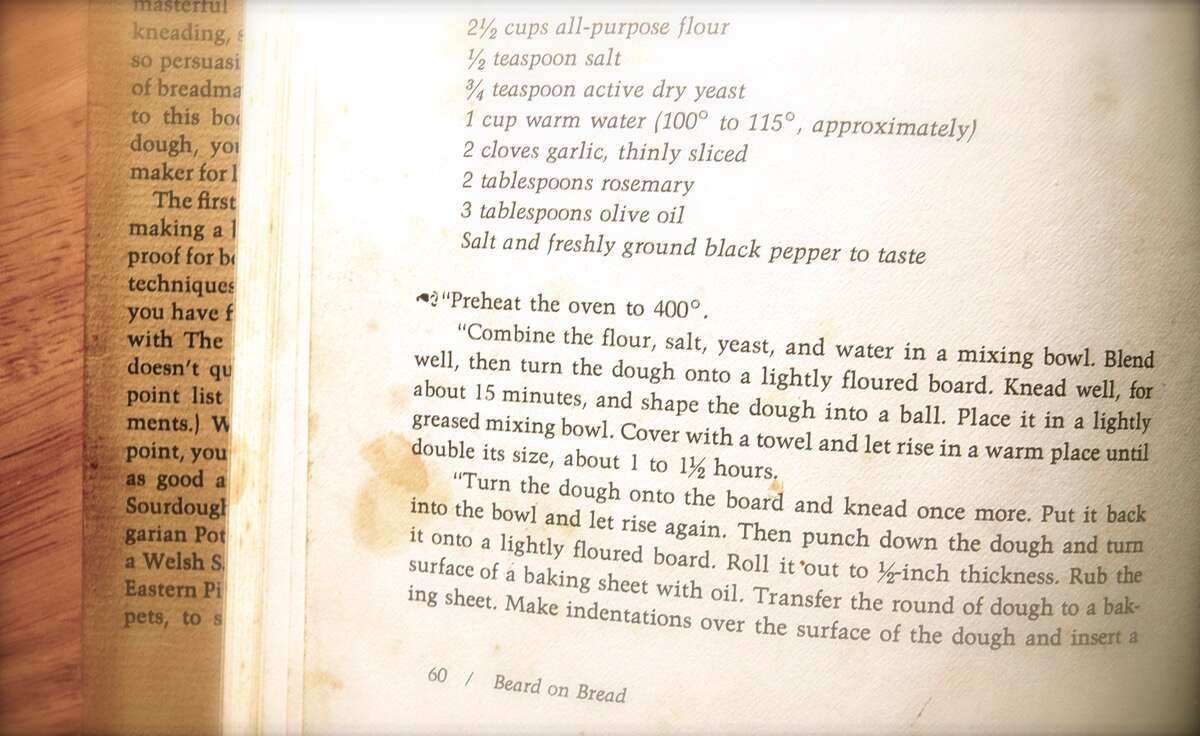 But gradually, as we all get busy with raising our families and building careers, all but the most devoted stop baking homemade bread. Small children aren't fans of the lusty loaf; they want soft bread for their lunchbox PB & Js. And heck, Pepperidge Farm makes a REALLY tasty sliced bread.

Artisan bread? Off the table – literally.

Jump forward again, this time to the mid-1990s. No longer toddlers or tweens, the kids are more willing to try different foods. Fettuccine. Avocado.

We bake our own baguettes; mastering Julia Child's 20-page French bread recipe is our mission. We experiment with poolish and preferment; try out baker's weights and autolyse and spelt.

And finally settle in with our favorite recipes, once again becoming the "breadmakers for life" James Beard (and Tassajara) pushed us to become.

The following recipe – Semolina Rolls with Golden Raisins, Fennel, and Pine Nuts – is loosely based on a ’90s "superstar" bread, one that was on everyone's lips – literally. Amy Scherber's semolina bread with golden raisins and fennel is still sold in her NYC bakeries today. 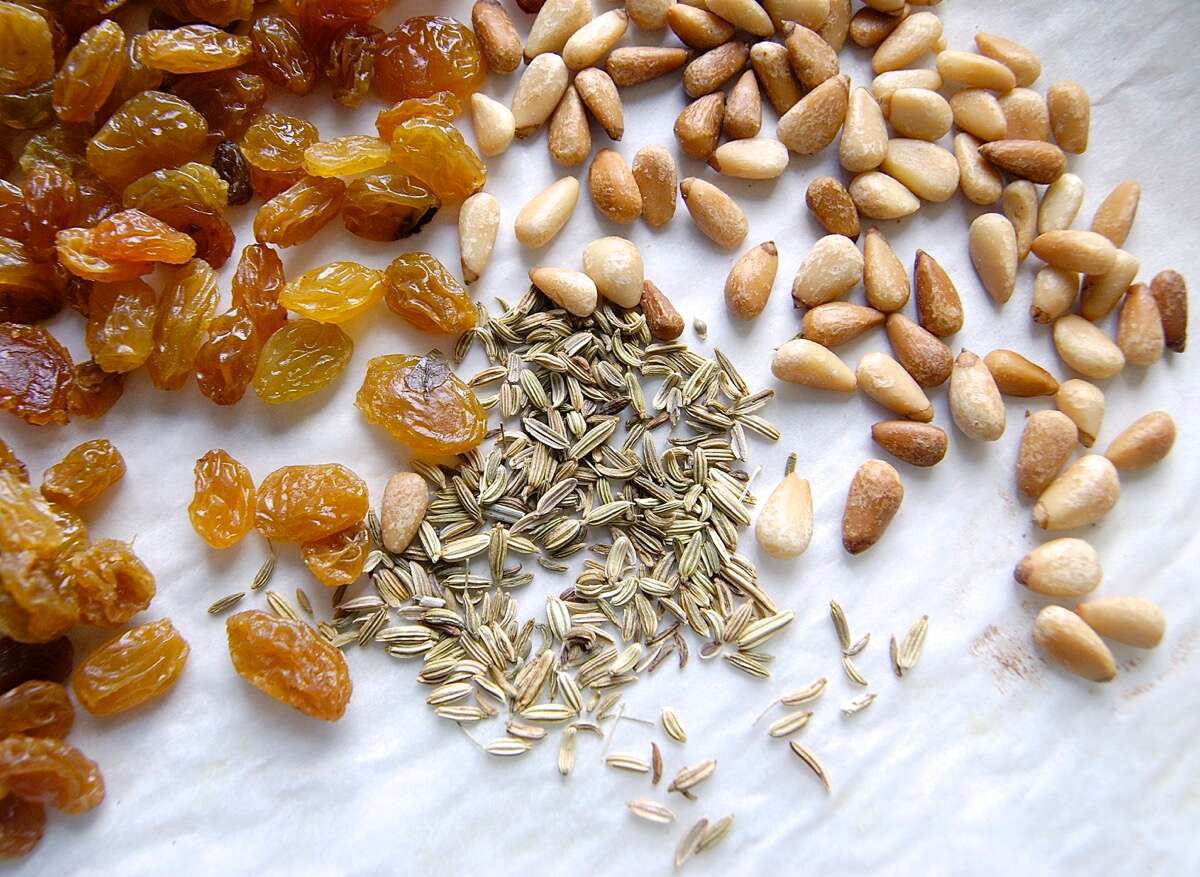 At one point back in the ’90s, Amy added pine nuts to the formula; and that's the version I've emulated in these rolls. I love the flavor combination of sweet raisin, mildly licorice-y fennel seed, and toasty, rich pine nuts. 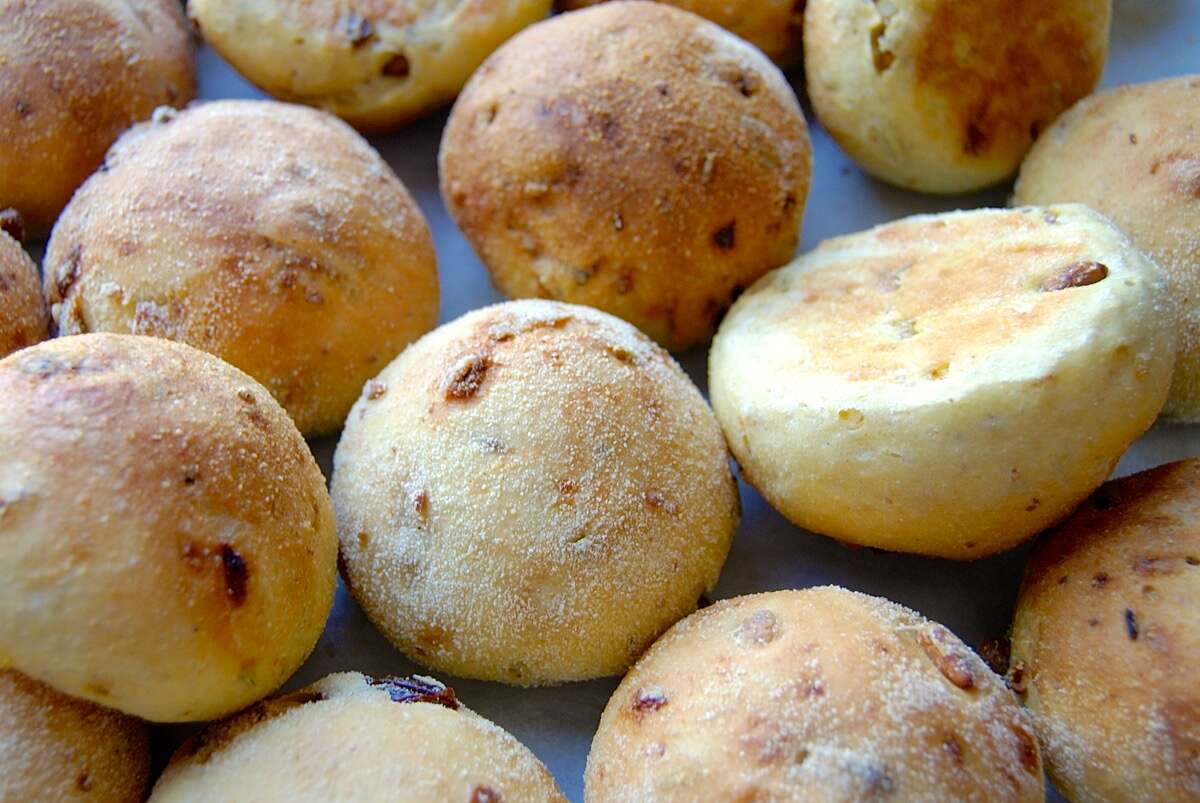 Texture-wise, the rolls are very light with, a crunchy exterior that's part crusty crust, part their coating of semolina.

Looking to launch (or relaunch) your own artisan bread movement? Start here. 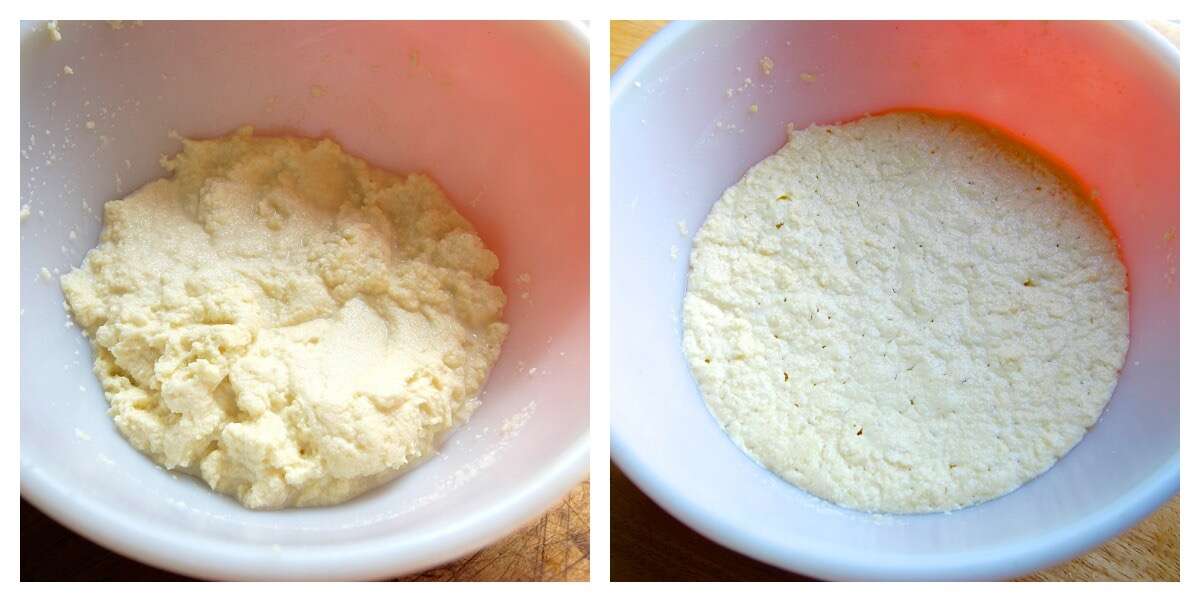 We'll begin with a preferment: an overnight starter. Combine the following in a mixing bowl:

The mixture will look like scrambled eggs, rather than a typical starter; that's fine. Semolina is a coarse grind of high-protein durum wheat flour, and doesn't readily form a smooth dough.

Cover the bowl and let the preferment rest at cool room temperature (68°F to 70°F) overnight, or for about 12 to 16 hours.

Next day, combine the following with the preferment:

*If you don't have semolina, don't want to buy it, and are willing to forgo the golden color and crunch in these rolls, substitute unbleached all-purpose flour in both the preferment and dough. You'll need to back off on the water a bit; start with 1/3 cup water in the dough, adding more if necessary.

Mix and knead to make a soft, smooth dough. Do this by hand; using a stand or hand mixer; or in your bread machine, set on the dough cycle. 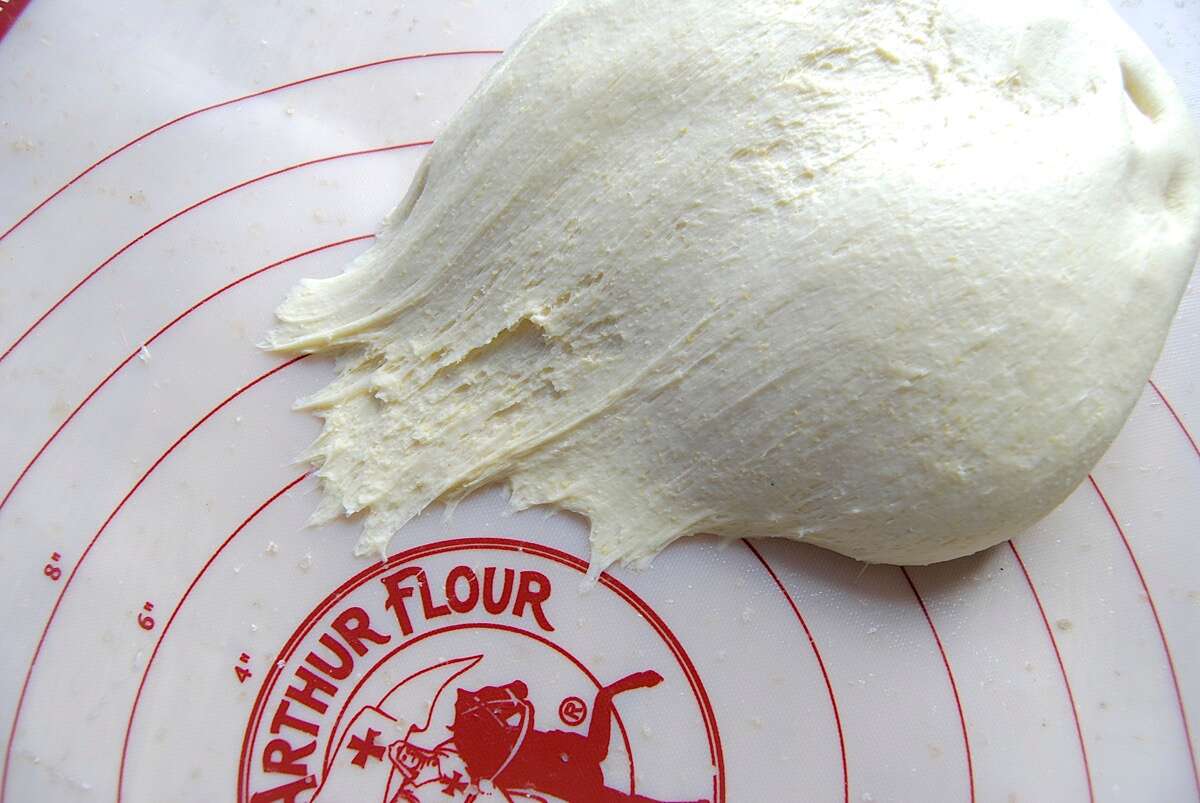 Notice the dough is smooth and elastic, but still has a tiny bit of stickiness. This is the texture you're after. 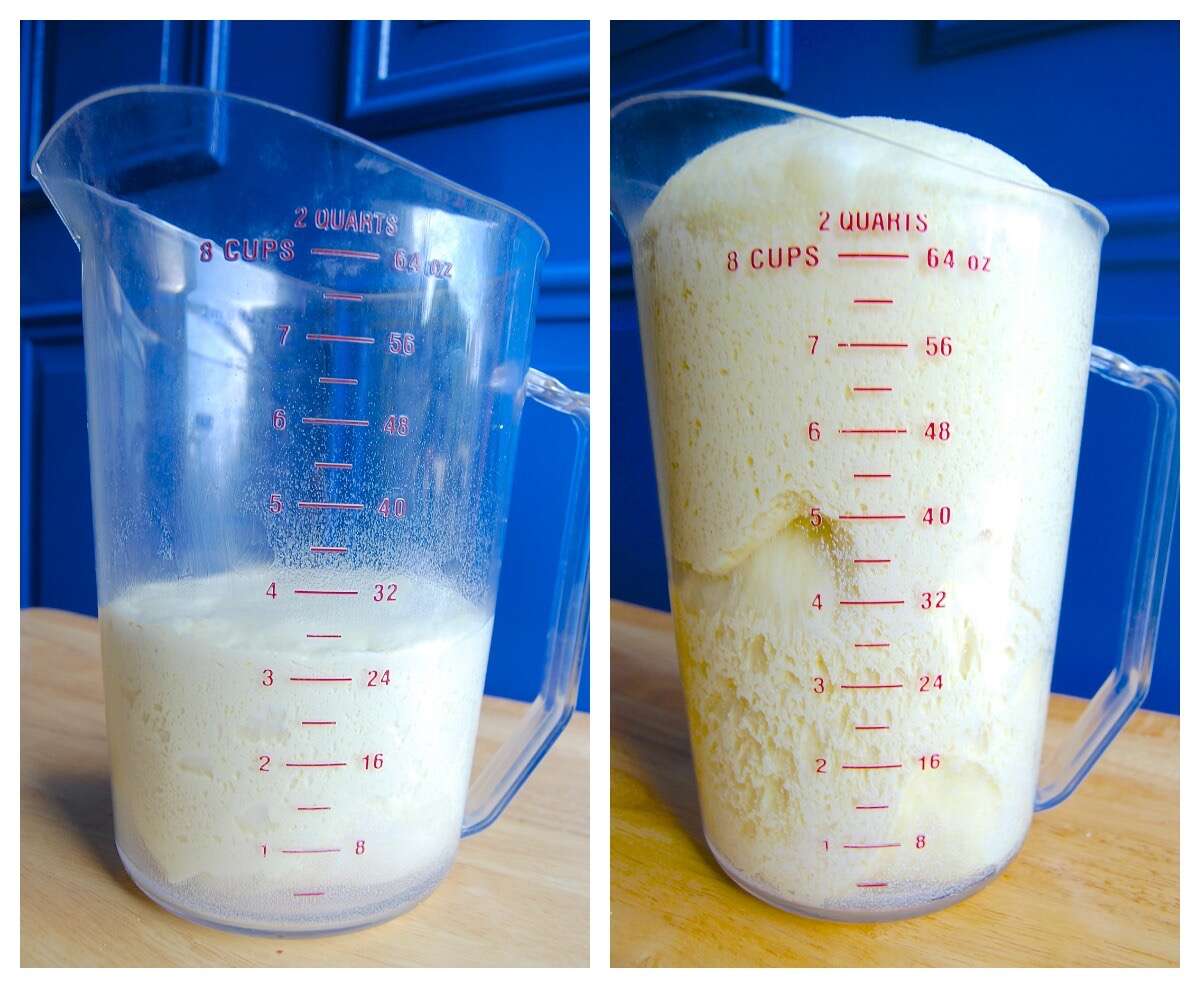 Shape the dough into a ball, place it in a lightly greased bowl (or 8-cup measure, as I've done here), and let it rise for about 60 to 90 minutes, until it's very puffy; it should double in bulk.

I was surprised to see my dough more than double after just 60 minutes. Happy yeast! 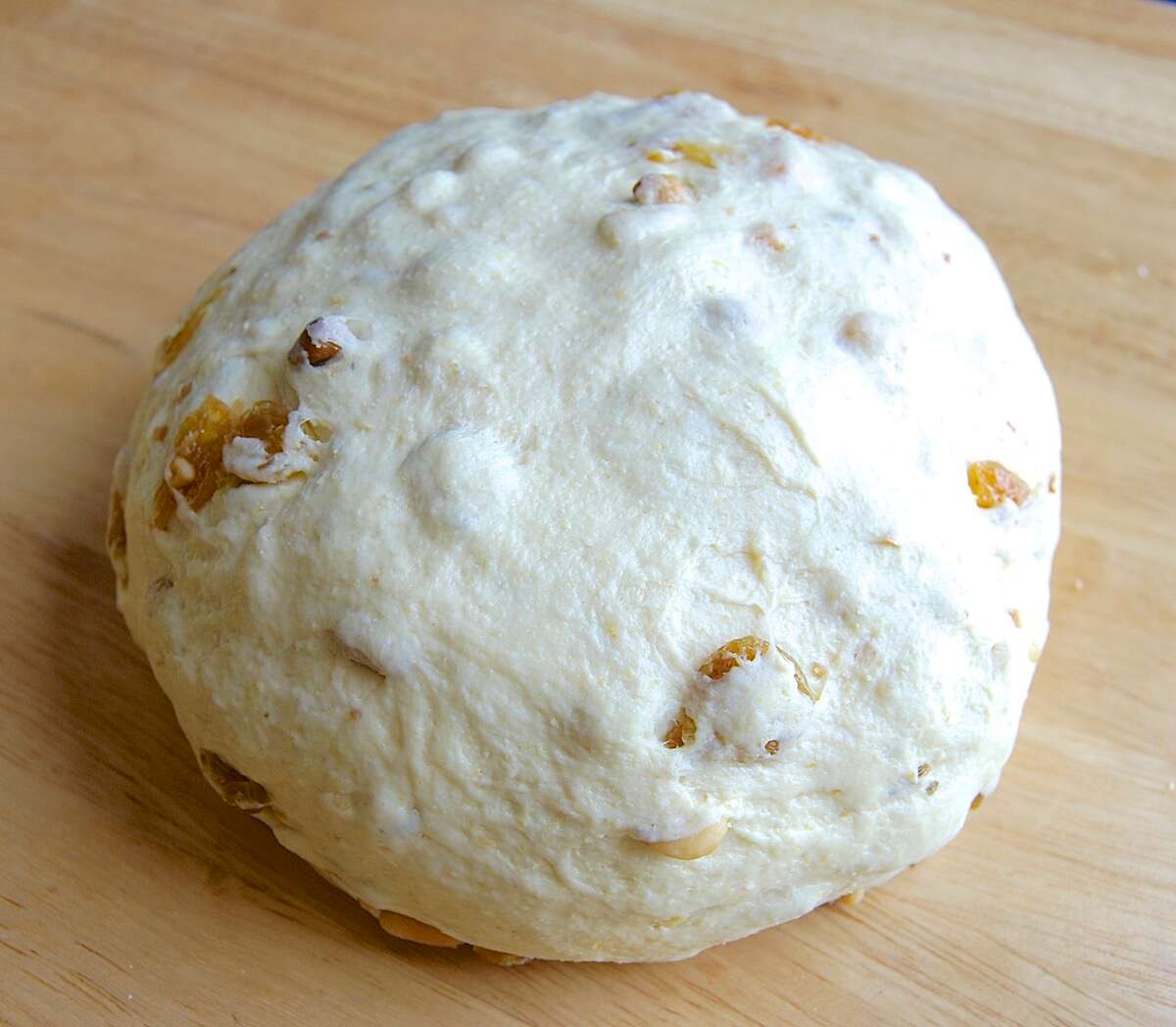 Gently deflate the dough, and knead in the following: 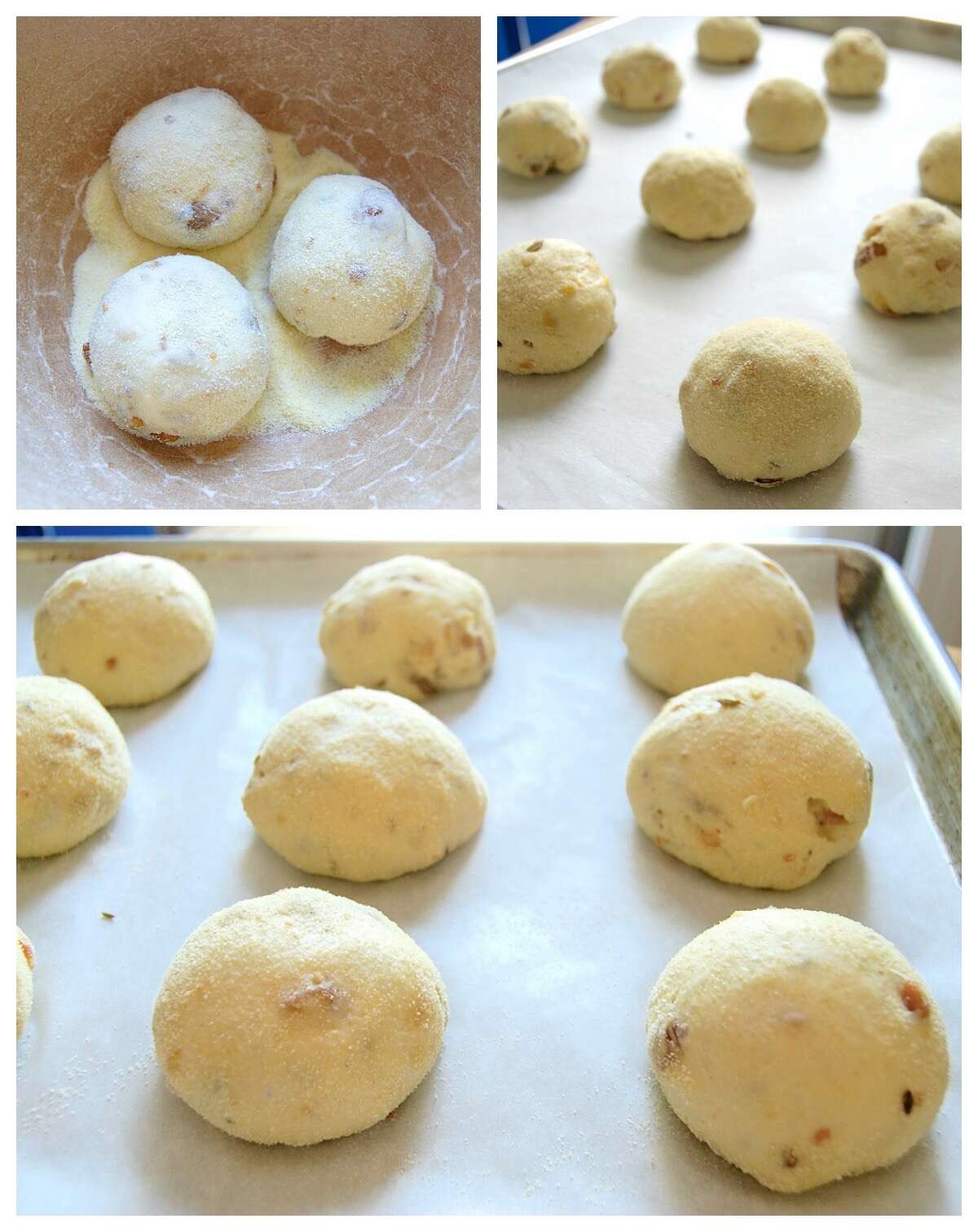 Divide the dough into 24 pieces, and round each piece into a ball. Drop the balls into a shallow pan with some semolina (or yellow cornmeal), and roll them around to coat.

Space the balls on a lightly greased or parchment-lined baking sheet, leaving about 1 1/2" between them. Cover the rolls with lightly greased plastic, and let them rise for about 2 hours, until they're puffy.

Why the long second rise? Sugar from the raisins gradually leaches into the dough, slowing its rise. This is why we don't add the raisins until after the first rise – to give the yeast a chance to really get going before introducing any sugar.

Towards the end of the rising time, preheat the oven to 400°F. 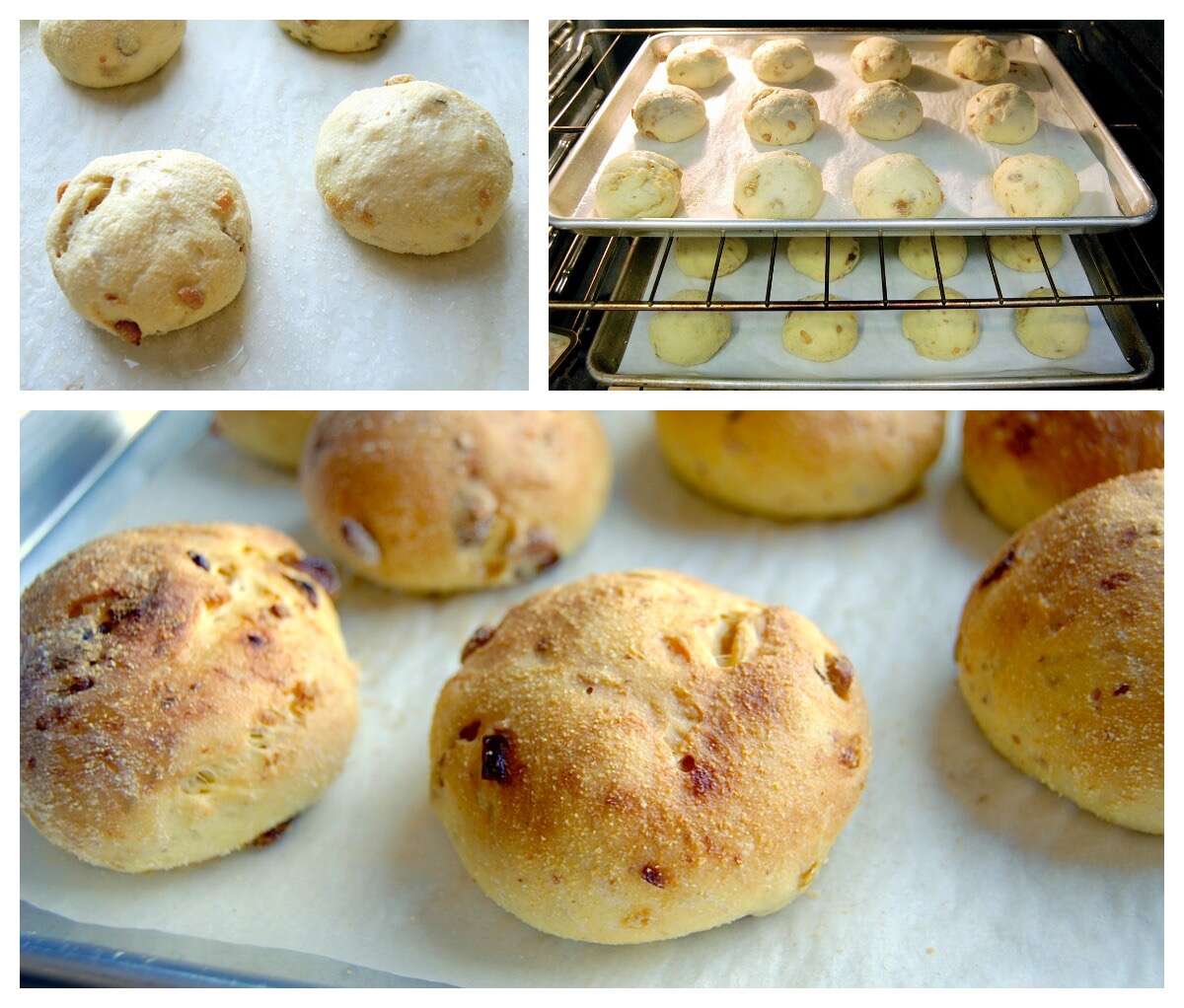 Spray the rolls with lukewarm water, and place the pan in the oven. Bake the rolls for about 15 to 20 minutes, until they're golden brown. 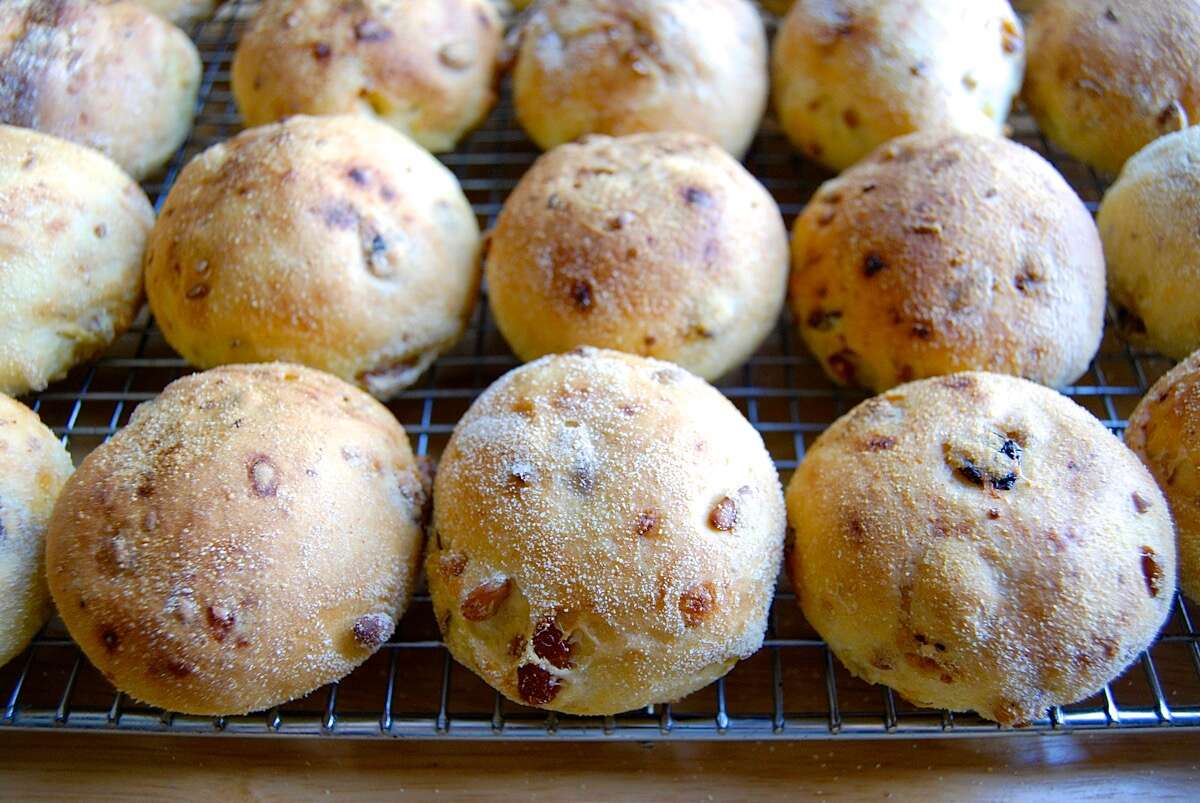 Remove the rolls from the oven, and transfer them to a rack to cool. Store well-wrapped for several days at room temperature; freeze for longer storage.

Serve these rolls to your adult kids. They may have turned up their noses at artisan bread back in the ’80s and early ’90s but, as open-minded Millennials, I think they'll find them a great accompaniment to the interesting meals they've learned to cook. Au revoir, PB & J!

Are you a Boomer who's gone from bread-baking to bread-buying and back again? Tell us about your journey in comments, below.

See all of our American Baking Down the Decades posts, covering 1900-2015.