The Coupe du Monde de la Boulangerie – the World Cup of Baking, a.k.a. the "bread-baking Olympics" – is being held in Paris this week. Teams of bakers from all over the world represent their respective countries in the quest for the top prize. Several members of our King Arthur Bakery team are onsite, including Jeff Yankellow – a former Team USA captain who'll be sharing his experiences here over the next few days.

The Coupe du Monde de la Boulangerie isn't the only reason, but it’s the event that many of the Americans here plan their week around. It's a great opportunity to share handshakes and hugs with bakers from the U.S. and around the world, people I don’t see often. All of the regulars are here, creating a reunion of familiar faces.

Team USA did well today. All of the teams did, to be honest. The judges will ultimately decide the champion. 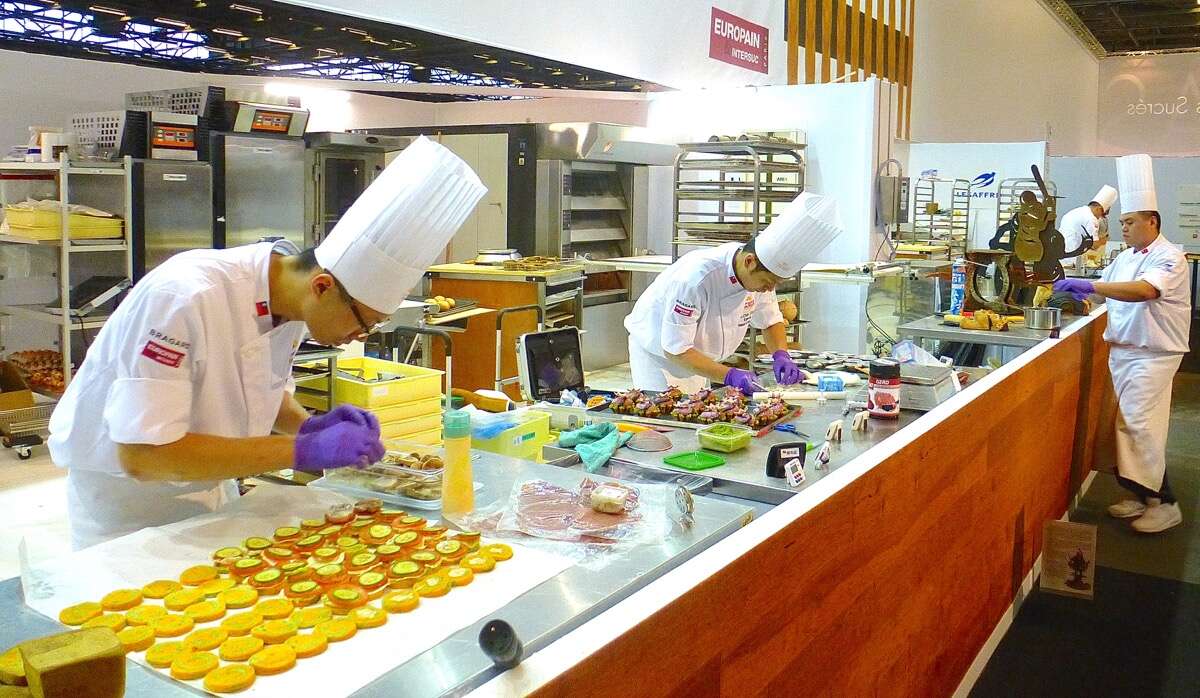 Twelve teams of three bakers each from around the world are here in Paris to compete. The category names have changed over the years, but to keep it simple they are baguettes and world breads; breakfast pastries, and artistic design.

Each team member is responsible for one specialty, and there are very clear guidelines on what they must bake and how much time they have to do it.

I suspect the words “food” and “competition” would have most people thinking of what they can find on TV almost any day of the week, focused as much on drama as technique. The Coupe is far from that. It’s the premier event in the world for bread baking and is on par with the Bocuse d’Or for cooking and the Coupe du Monde de la Patisserie (World Cup of Pastry). 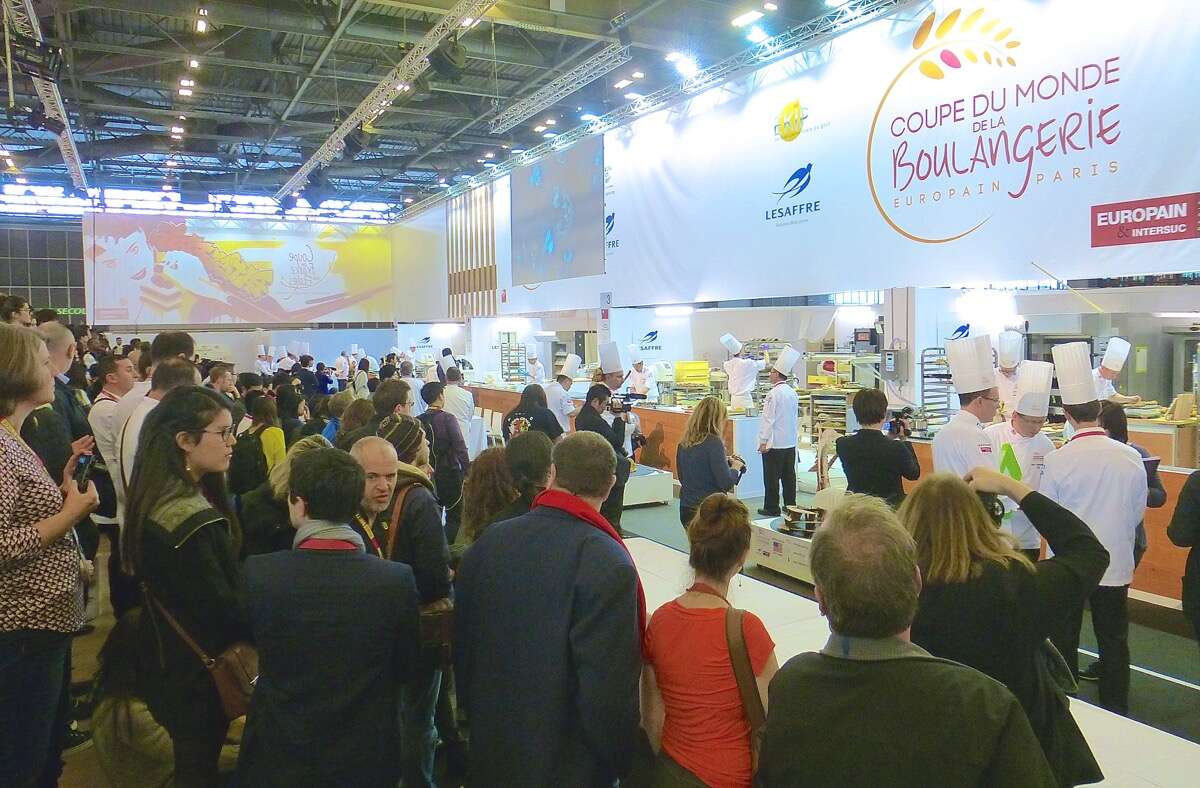 I don’t know if the pictures do it enough justice. There are large crowds of supporters from every country, loud music, bright lights, and regular commentaries from the emcee. We even had a visit from the President of France today.

Competition is not for everyone. But the founder of the Coupe, Christian Vabret MOF (Master Worker of France), had a clear goal in mind when he started, and he has far surpassed it by any measure.

Vabret wanted to raise awareness of artisan baking, advance the craft and, perhaps the most important goal, bring bakers with a common passion together from around the world.

Sometimes I wonder if we could achieve the same benefits without the competition. Perhaps the Coupe should be simply a showcase of bakers from around the world. But I don’t think we’d see the same results.

We’ve also made it clear by consistently performing well that artisan bakers in the U.S. have reached the same level as those in Europe and around the world. Surprisingly, many still need convincing that we can make much more than just hamburger buns and bagels.

The Coupe is always held in Paris during the bakery trade show Europain, one of the three main bakery shows around the world (with the others in Germany and the U.S.). Europain is the one most targeted to craft baking (a.k.a. artisan baking).

I’m not against using the word “artisan” but tend to lean toward “craft” when describing this style of baking, where the focus is on producing the best bread and pastry possible with great ingredients and good technique. Perhaps 80% of the bakeries in France fall under this category, and the rest are more commercial or industrial. In the United States the numbers are probably reversed.

Culturally things are different here. It’s a common sight to see people lined up at a bakery in Paris in the early evenings on their way home from work to grab their daily baguettes, which are often baked fresh at that time. Perhaps one is enough, but it’s not uncommon to see a customer leaving with two or thee loaves tucked under his or her arm.

Bread goes deeper than the table in France. It’s a simple food with deep meaning that has been woven into the history here for centuries.

Back to Europain. It’s full of what one would expect at any food trade show, including booths representing ingredient companies, equipment companies, and flour mills. There’s also an impressive showing by schools with specialties in bread, pastry, and chocolate.

You’ll find the flour mills in one area, the equipment vendors in another, and chocolate companies in a third. They’re the easiest to find: just follow your nose to the wonderful aroma of cocoa.

The most impressive area for me is that of the flour mills. Due to the high number of craft bakeries here, the mills are mostly focused on that style of bread. The bread coming out of the mills' temporary trade show bakeries is of the highest quality. 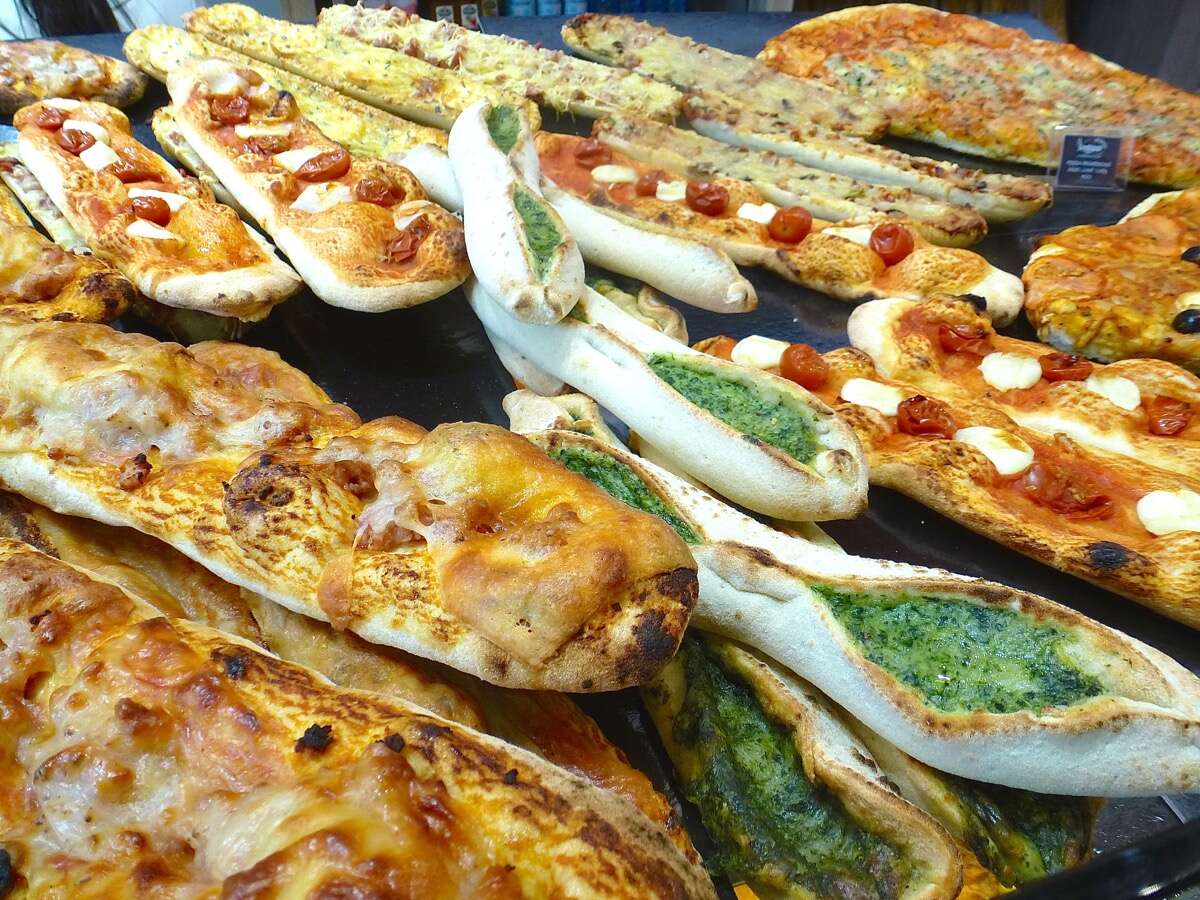 There are beautiful loaves of all varieties for attendees to sample. 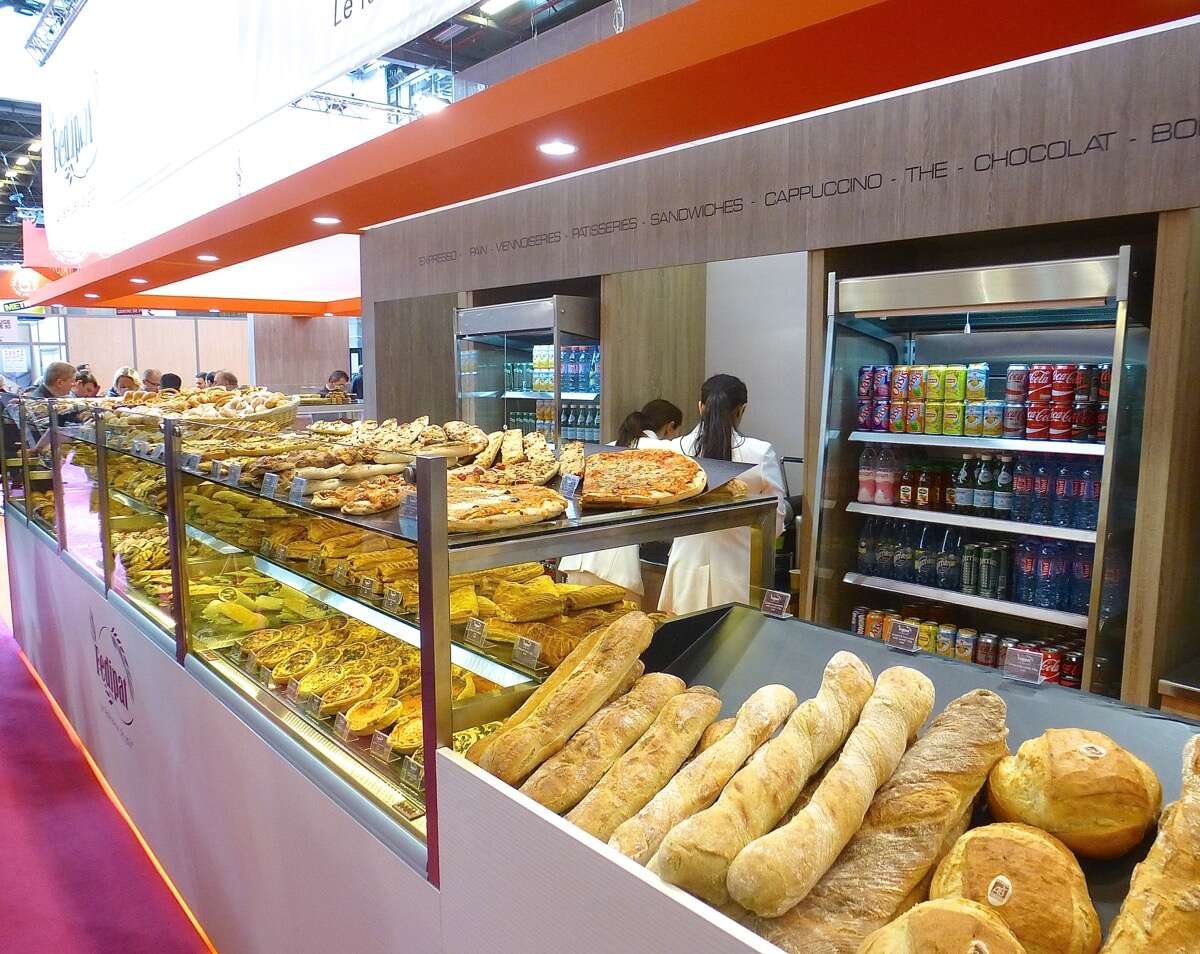 The effort doesn’t stop with the bread itself, but extends to the displays as well. Full-size bakeries and retail shops sit among the more traditional trade show booths. 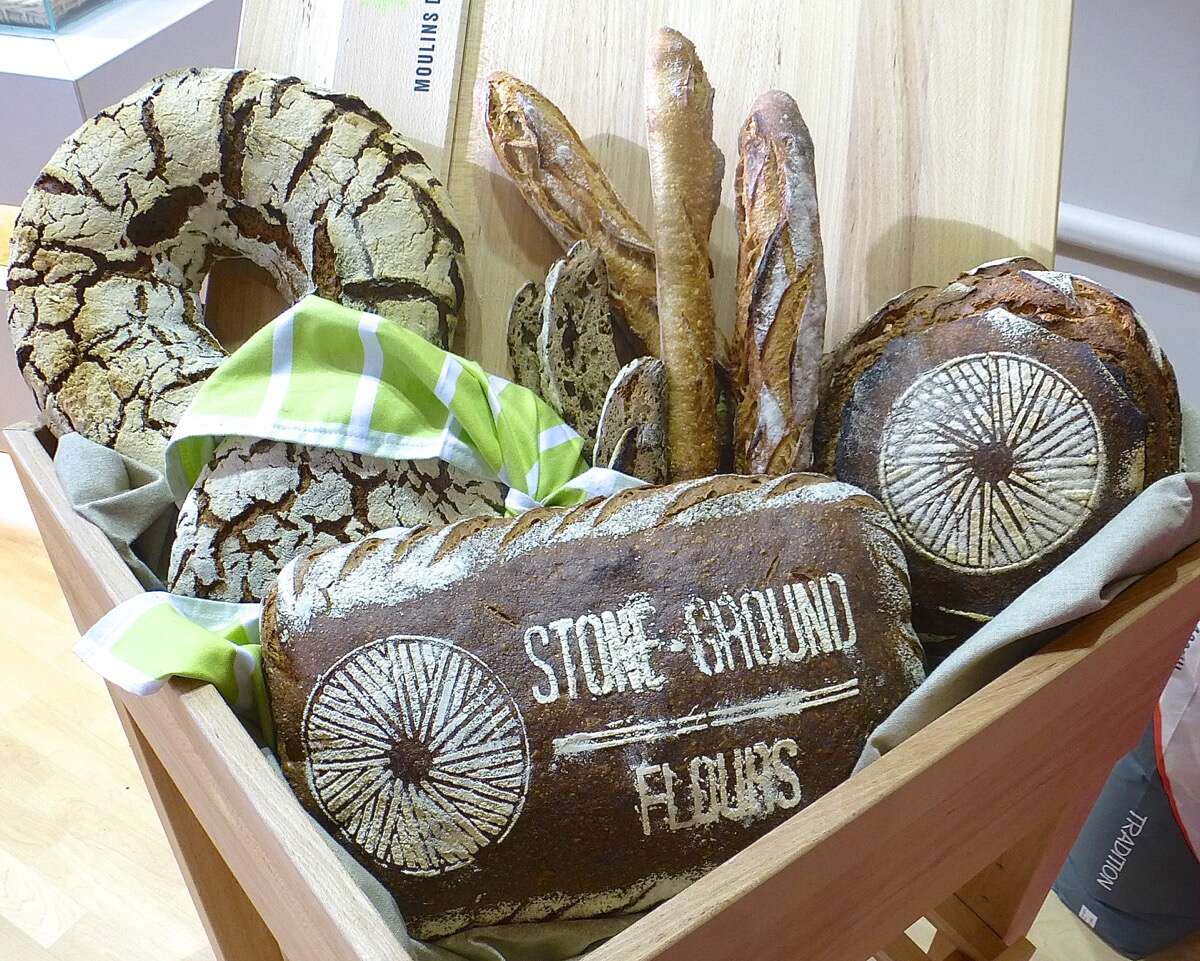 It’s a premier opportunity for the mills to showcase what they can do for the baker. In France I believe most mills are set up to provide a lot of support to the small bakeries; this personal relationship adds immense value. We try and do the same at King Arthur Flour for our bakers at home, providing all kinds of practical baking help along with the flour we sell.

Europain and the Coupe du Monde give us a reason to be here at the same time, but ultimately the best part of being in Paris is being with so many people who share a passion for baking. For dinner this evening I joined James MacGuire, a revered Canadian baker and frequent guest instructor at King Arthur’s Baking Education Center, and Hubert Chiron, a leading authority on bread in France.

We dined with a group of 30 Japanese bakers. There was a lot more Japanese and French being spoken (neither of which I’m fluent in) than English, but that didn’t matter.

We all shared the thing that brought us here: a love of bread and pastry. And that was easy to understand.

I so love making bread. My favorite thing in the kitchen to do. I would so love to go see this Bake Off sometime. The bread baking semester in B & P School was my favorite.
Enjoyed your article...but I was wondering if you can tell me about the bread that looks like it was stuffed with spinach. Are the French bread pizza? They looks so good. How are they made?
As you heard from Bryanna on our Facebook page, Jeffrey reported that these breads were flatbreads stuffed with spinach and cheese. We do have a recipe for Stuffed Baguettes on our website, which you may produce something similar if you use spinach and cheese to fill the loaves. Happy baking! Kye@KAF
Thanks, Jeff, for this excellent article. I feel like I made an enjoyable virtual visit. I also want to thank you for your superb course at Craftsy, which is where I found out about you. It's rare to find a person who not only is at the top of his or her profession, but who can also teach it. You have a lot of fans. By the way, I had the most unbelievable croissant at this boulangerie in Paris. Maybe you can visit sometime: http://www.chocoparis.com/ble-sucre/ Thanks again for the fine article.