Our annual tribute to baking FAILS

We recently asked you, via Facebook, to share some of your favorite kitchen disasters. And boy, did you respond.

Without further ado, here are our favorite baking fails – epic, and otherwise.

Note: Look at the photos in each group top to bottom; left to right; or clockwise, starting from top left, to match them with their contributor comments. 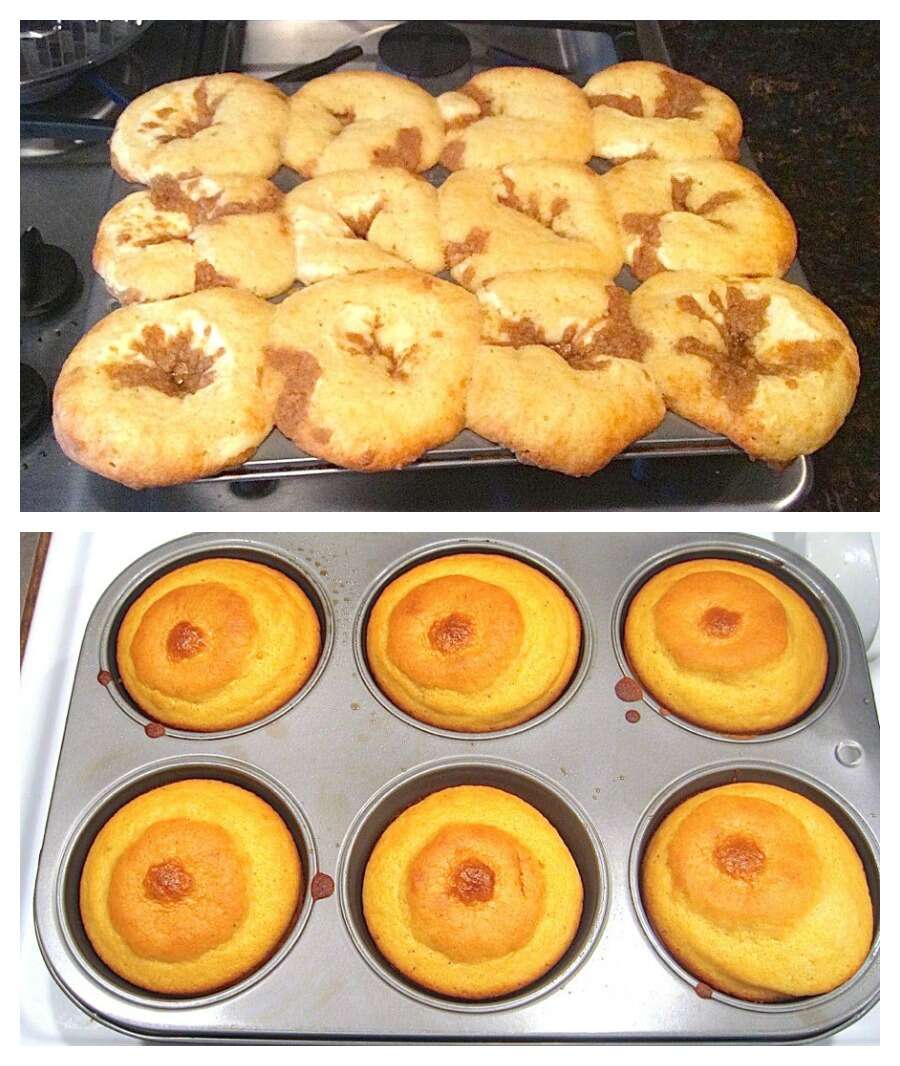 Let's jump right in with some muffed muffins.

Anne: The streusel topping wasn't supposed to sink into the muffins ... but they were delicious. 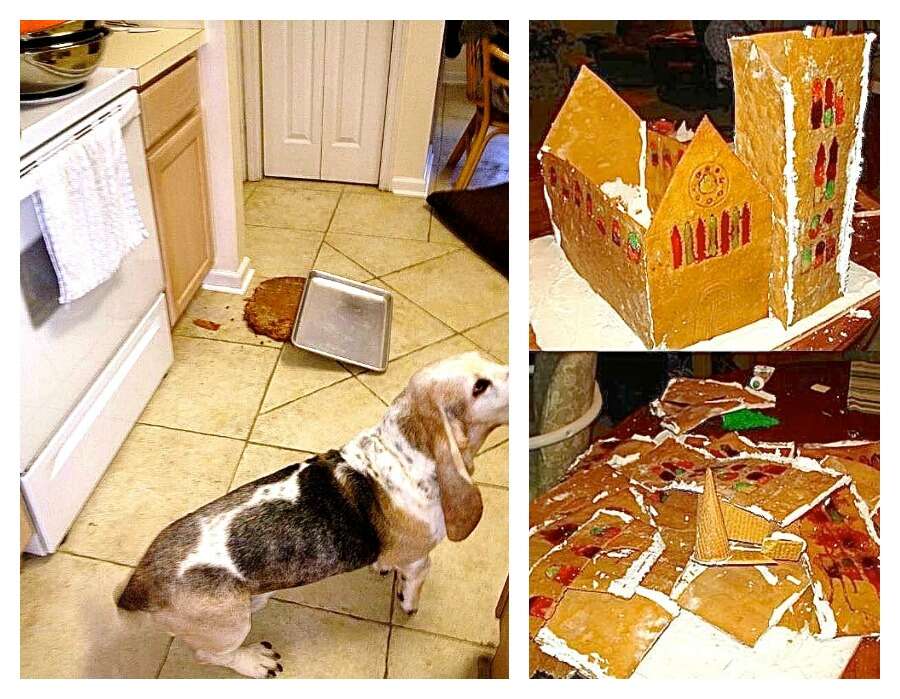 Ranee: That time I forgot to push the last of the 9 cake layers for the wedding cake I was making to the back of the counter where the dog couldn't reach it!

Paula: One year I built a gingerbread cathedral for a contest. It seemed to be going so well... 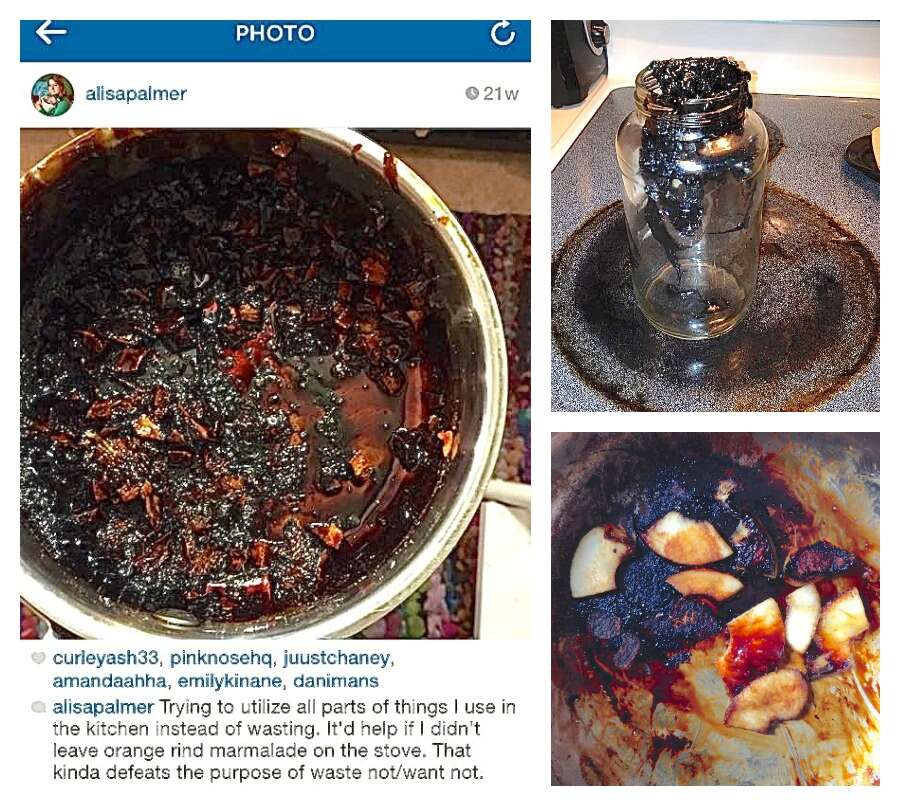 And other times, they just burn.

Alisa: Left marmalade on the stove. My daughter still talks about it.

Colrain: Not baking, but candy making. Let's call this "over reduced" apple cider. It resembles some sort of primordial ooze and hardened into a weapons grade rock.

PJ: Sugar-coated apples burn when left over a flame too long. Yeah, light dawns on Marblehead! 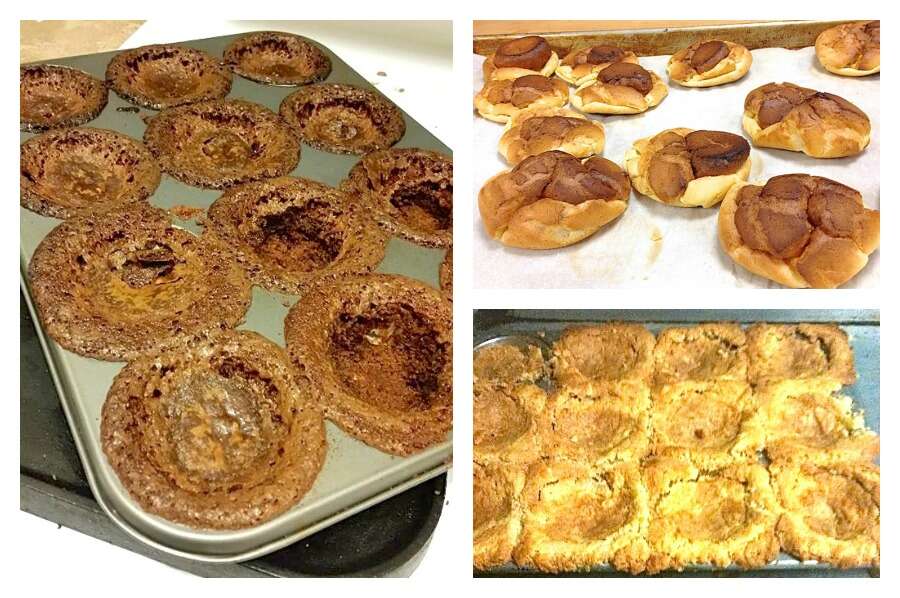 Amy: Tried to use a from-scratch cake recipe for cupcakes, but over-baked them at too high of heat. Took 3 days of soaking to get them out of the pan.

Tracy: These were supposed to be pineapple upside down muffins. They... were not. Ended up as a parfait I think. 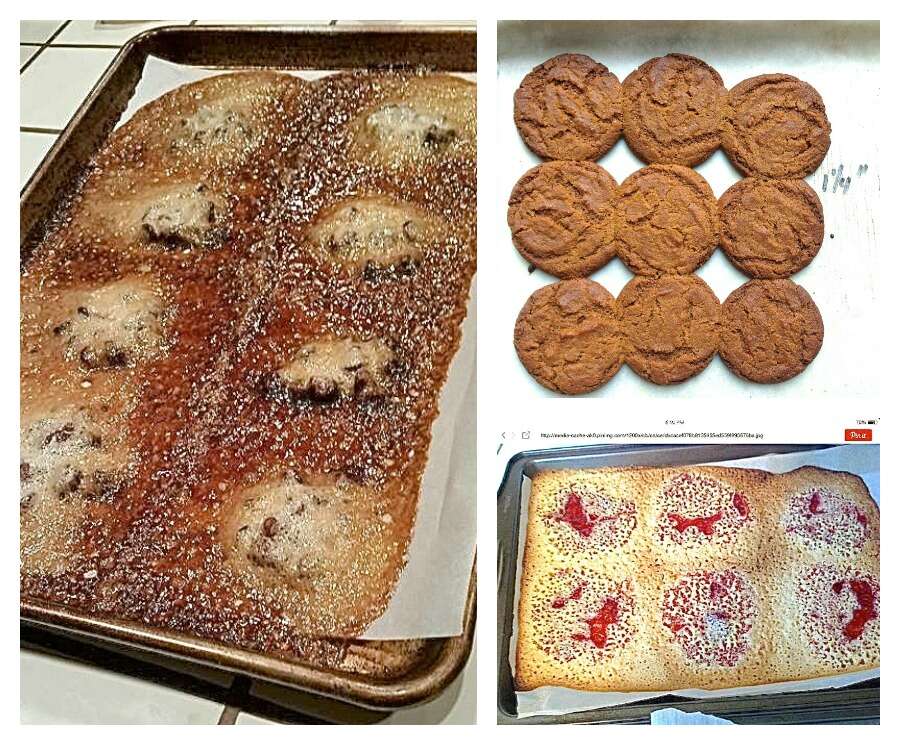 PJ: I meant to do this. Honest.

Cheryl: Saved this from my PinterFAIL, it was a Pinterest gluten free toaster tart recipe, yikes!

PJ: Pumpkin Cream Pie. Crust so hard it took pounding it on the deck with a spade fork to even get it this far.

Oralia: Cheesecake flan, I didn't put it in a water bath. I got scared when I uncovered it. It looked like a soufflé and five mins later it fell flat. 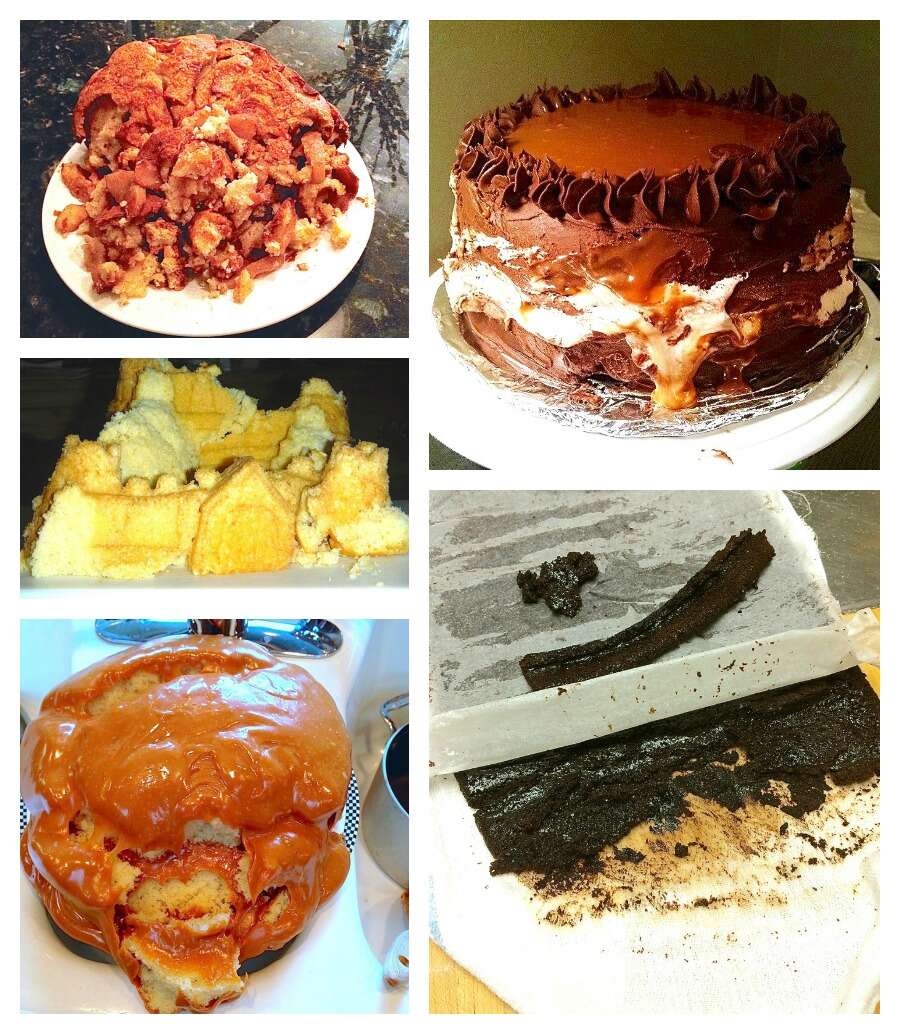 Dottie: The caramel and marshmallow fillings were not quite as firm as I had hoped...blew out the icing dam. Luckily it was served on New Year's Eve so everyone was too tipsy to notice.

Gwen: I thought parchment was supposed to be non-stick?

Lori: This was a wonderful homemade white cake. When I poured the caramel icing on it, the cake disintegrated. To me, this cake looks like a brain or a turkey. ...and, of course, breads gone wrong.

Sam: This loaf just fell apart as I was taking it out of the pan. 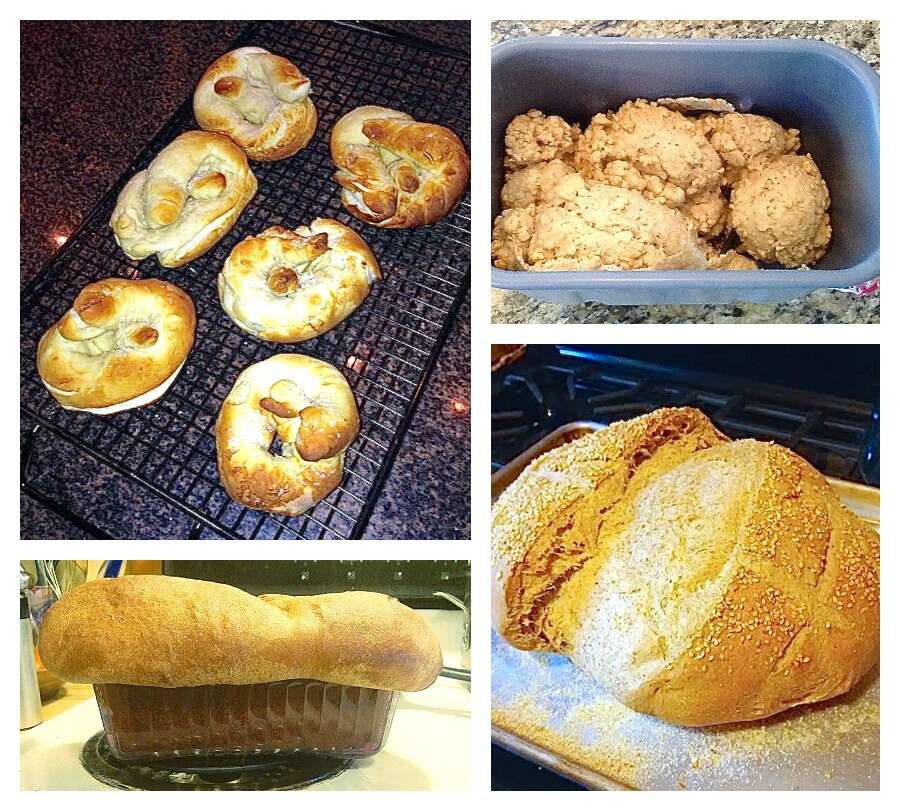 Jill: And my poop-shaped pretzels.

Nancy: My loaf of sourdough bread in the bread machine.

Patricia: The bread just exploded. It was like Bread-ocalypse in my oven or Breadzilla being born.

Margo: I think I let this bread rise too long...I had to cut it out of the pan. 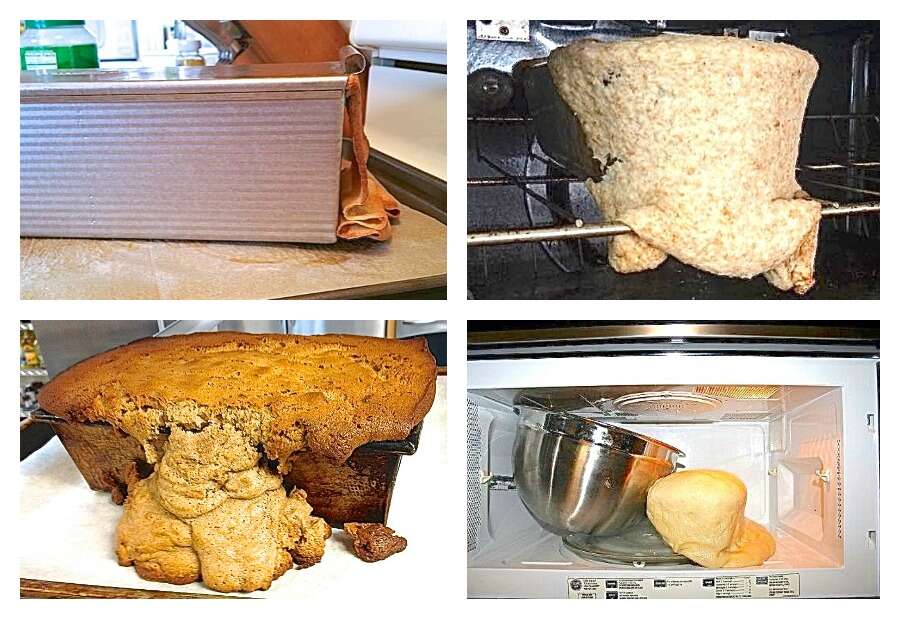 Sometimes the bread's too much for the pan...

Jenn: I guess it rose a little too much before going in the oven. LOL, at least I had the foresight to put it on a pan (I usually don't)!

Katherine: We just knew we didn't use enough flour, yet somehow we just tried to roll with it anyhow. This was supposed to be cinnamon swirl bread. Clearly, an epic fail!

Paula: I don't even remember what happened, but it's likely that I used the microwave as my "proof box" with hot water in the bowl... Lucy!

MJ: This is why we call it the test kitchen!

...and sometimes, the pan's fine and it's just good old user error.

Barbara: Failed (a.k.a. depressed) gingerbread. 15 years, and I still can't get the altitude thing right (at least that's what I use as my excuse!).

Margo: I don't know what happened to this cake (and it was my birthday cake). I just filled the crater with frosting. 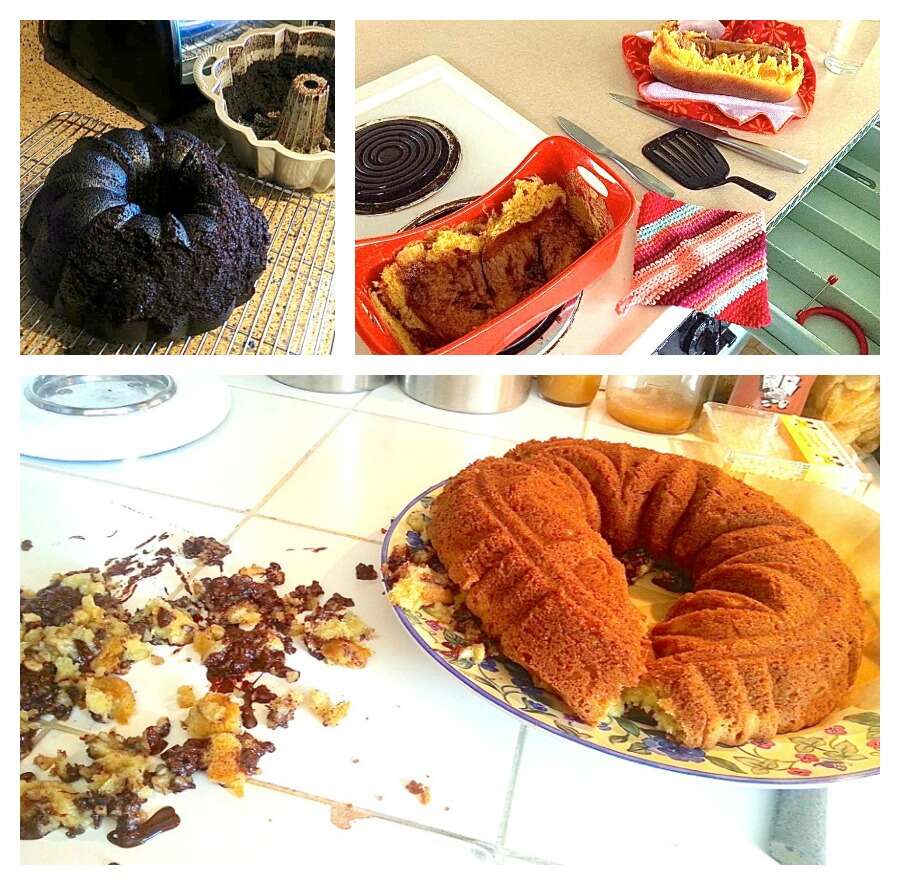 Still, as bakers, we have a certain stick-to-itiveness.

Patty: It seems that having a chocolate Bundt cake stick has become a yearly event for me. (It happens when I follow the recipe's directions for coating the pan, instead of using my preferred method.) This one became an Oreo Trifle instead.

Justina: Experimenting with cinnamon swirl bread. Maybe should have greased the pan.

Jamie: While on the rack cooling, the center filling of chocolate chips, cinnamon and walnuts simply dropped right out. This is why the recipe calls for a springform pan, and not my 100-year old cast iron bundt pan. 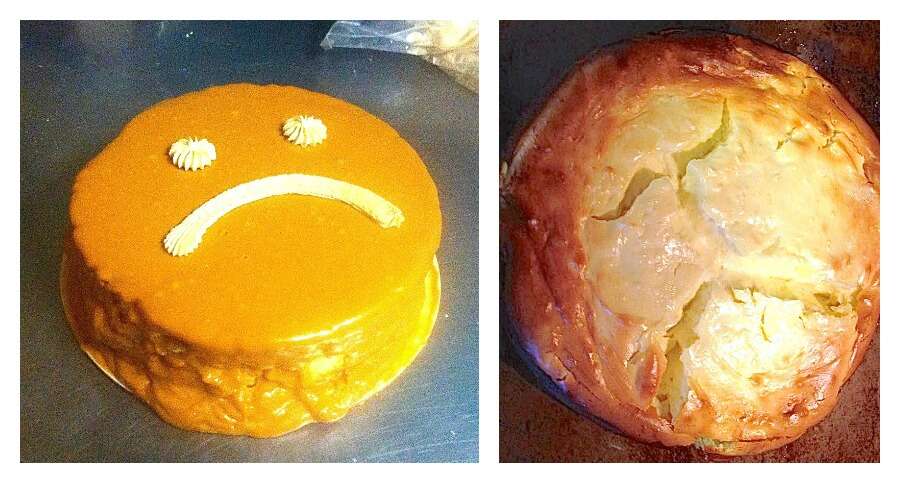 Even when things don't turn out quite right...

Jane: I'm heartened to see that I'm not the only one to have been defeated by caramel cake!

In the end, there's always something to smile about!

Thanks, all, for sharing your baking blunders. Here's to all of our foolish moments in the kitchen!

Join the fun! Tell us about your favorite baking blunders in comments, below.

I had one of my most irredeemable baking failures thirty years ago while visiting at a church on an Indian reservation in northern Montana. The pecan pie I made with pecans I had proudly brought up from my south Louisiana yard was beautiful and smelled delicious. Our host, the saintly pastor, was bravely and courteously going through the first slice before I tasted the pie and realized the crystalline substance in that unmarked container was salt and not sugar.
Oh I wish I could add a picture of my.first attempt at bread in a bread machine i now use it as a door stop. Lololol
When I was newly married and trying to impress my husband I made lemon meringue pie. Took for ever turned out perfectly, until I put it in the frig and hit the edge of the pie plate on the door, it flipped over and slid down each and every shelf, then upside down on the floor. Took almost as long to get the sticky stuff off of the frig as it did to make the pie.
i swear, i can't remember when i laughed so much and i laugh a LOT
We are glad we could make you laugh today, John! These are pretty hilarious. Elisabeth@KAF
HILARIOUS!! I think I have committed each of these blunders several times over. It never seems to get old. LOL The very 1st mistake I ever made was trying to make bread at 8yrs old. It was so petrified, that we took it outside smashed it on the sidewalk, and used it for chalking out our hopscotch game. Ah yes, the creativity continues ...
I can totally see that - using your bread to draw the hopscoth lines. Too funny! Thanks for getting my day off to a smiling start, Cindy - PJH P.S. Do kids still play hopscotch?
Great photos; the descriptions are hilarious! Bravo Brave Bakers!
So, my cat helped with a pumpkin pie disaster. I was pregnant with my first son. I had just baked two pumpkin pies to take to church in the evening. I was dutifully taking a rest, when I thought things in the kitchen just didn't sound right. Got up, went in to find my dear kitty on the counter, front feet in one of the pies, eating from the other one! My neighbor happened to come over as I was chasing her around the house. Probably saved her from some sort of dire consequences! My neighbor listened to my tearful explanation; calmly suggested that I cut the pies in half; put the two undamaged halves together and take one complete pie to church. She assured me that no one would know any difference. So that is what I did. Whew!
What an excellent idea from your neighbor! Thanks for sharing, that's a great one! Susan

It's that time of year!

The kitchen save; or, backing up from the inevitable boo-boo.