For your entire adult baking life, people have raved about your pies. "You should enter this in a contest," they say. "You'd win for sure!!!"

So you decide to go for it. What happens next? More (and in some ways less) than you think. More about the less later. 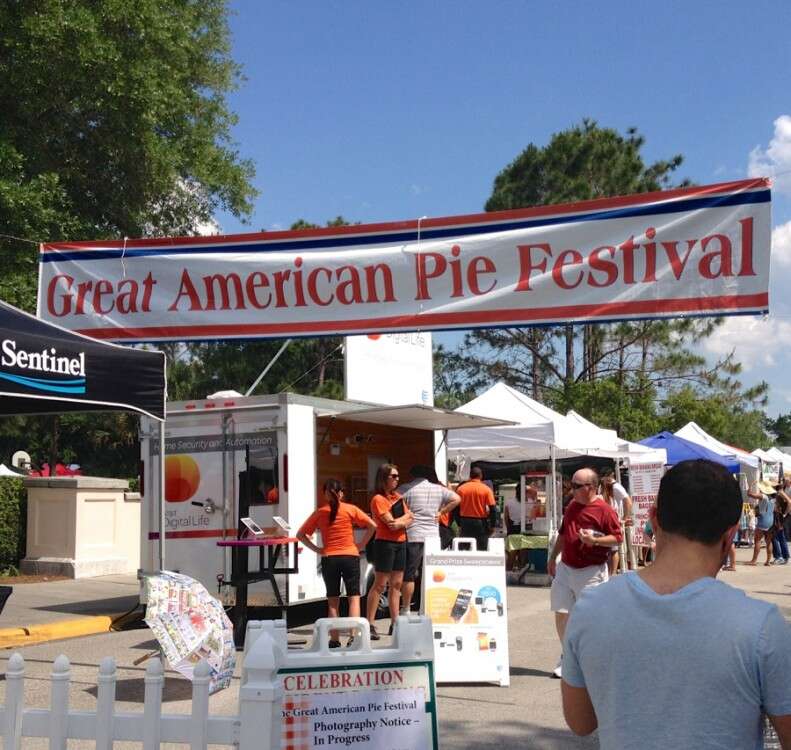 Fellow "Baking Sheet" newsletter colleague Gwen Adams and I spent last weekend in Orlando, Florida, attending, doing demonstrations, and judging at the Great American Pie Festival, which is put on by the American Pie Council. The creative director of the festival, the ebullient Linda Hoskins, gives an overview of last year's festival here.

Dedicated to all things pie, whether commercial, professional, or amateur, the American Pie Council puts on quite the extravaganza every year – beginning with a day devoted to commercial pie manufacturers. 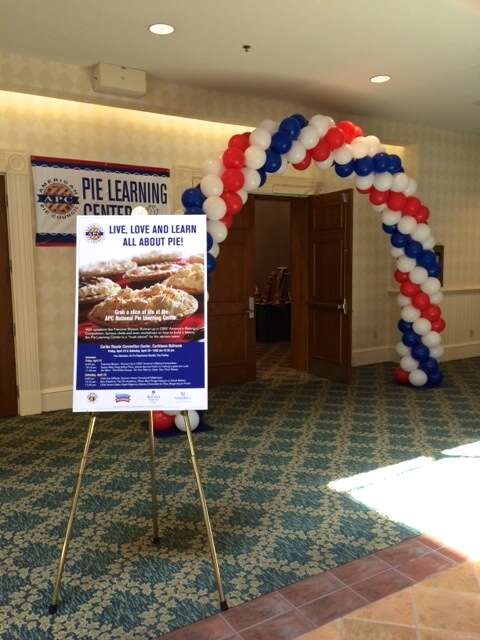 The Pie Learning Center was the place to be to learn about ingredients, current regulations, and pre-made fillings. We arrived that afternoon and set up our display table, and did some prep to get ready for the demonstration the next day.

Friday began with a very, very big table getting loaded up with pies from commercial producers. 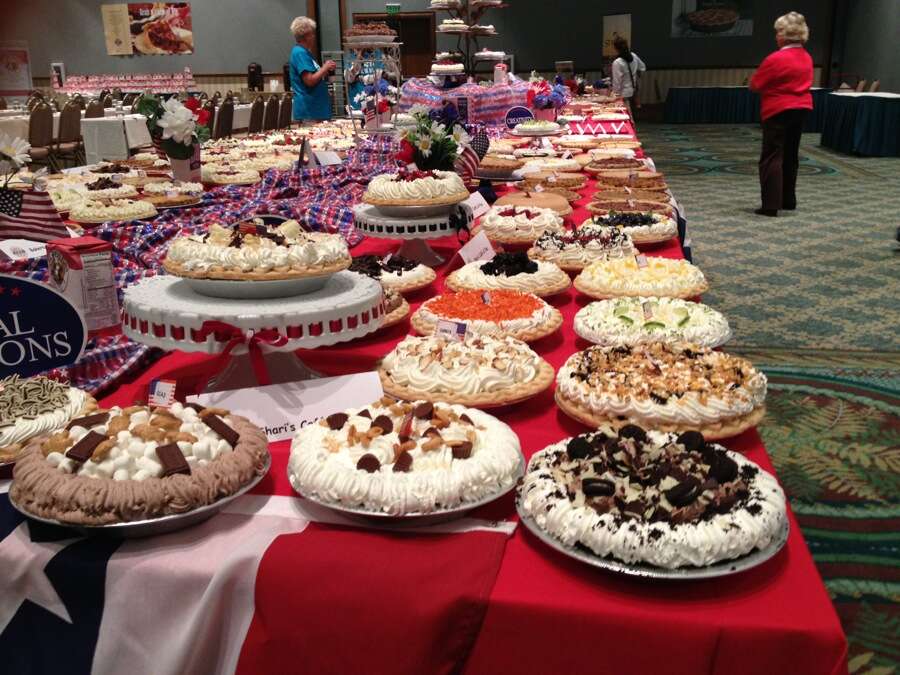 Baker's Square, Publix supermarkets, Legendary Baking, and several other pie manufacturers were required to bring two pies for each entry: one for judging and one for this amazing display. 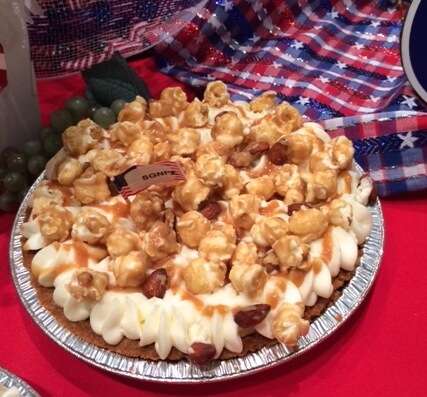 Gwen and I were both fascinated by this popcorn-topped pie. We saw others with all the trendiest flavors available: salted caramel, bacon, flavored marshmallows, you name it.

First up was a terrific demo by Francine Bryson, a native of Pickens, SC and recent contestant on CBS' The American Baking Competition. She made her Chocolate Peanut Butter Bacon Mousse Pie, which was mighty tasty, if I do say so myself. 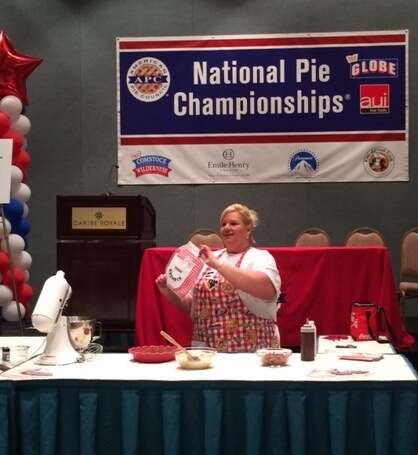 Then yours truly did her thing. I demonstrated our all-butter pie crust, then made an apple pie. 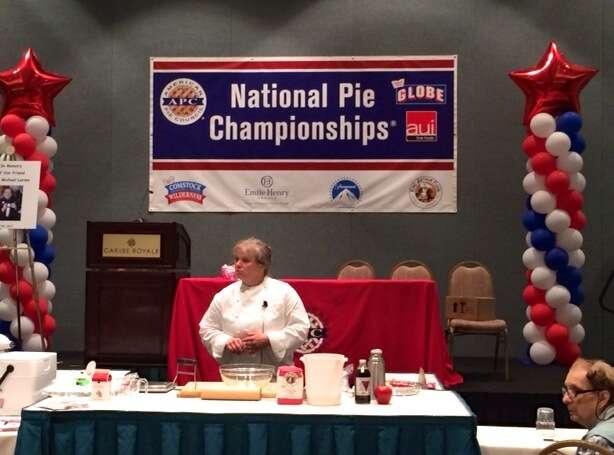 I was lucky enough to have a very engaged and attentive audience. They asked good questions, and you can see I'm taking one in above.

All the time I was doing this, Gwen had a steady stream of interested people coming up to our table to get their free flour. You can see the boiled cider bottle in its hero spot on the table; I gave tastes of it to Francine and several other attendees. Everyone I give it to wants to buy a bottle immediately, without fail. One of the bonuses of this demo was having a pie I could bake off to bring to the demo at the festival the next day. 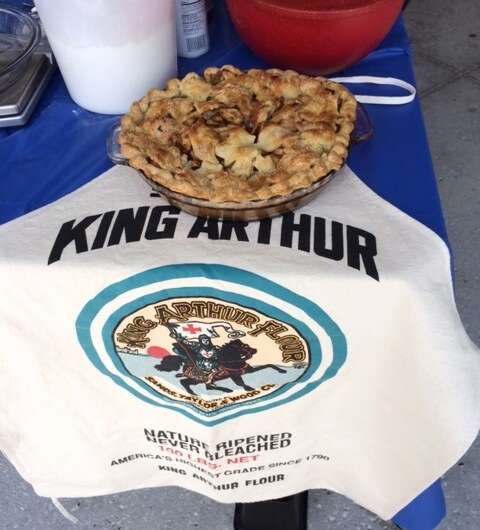 On day three, the judging for the amateur pie competition took place; hundreds of volunteer judges gathered to receive instructions on the procedures to follow, and to get a look at how to tabulate scores.

For the amateur competition, you can choose 20 different categories to enter. Some people enter four or five, some only one.

Some judges were assigned to specific category tables;  some were allowed to choose their category. I ended up at the blueberry pie table, while Gwen judged at one of two apple pie tables.

Volunteers in red T-shirts displayed the pies uncut, so they could be rated on their appearance; then cut a slice so we could see and rate the pies on their cross section. Lastly, we all took a taste of the sample slice and wrote down our ratings. 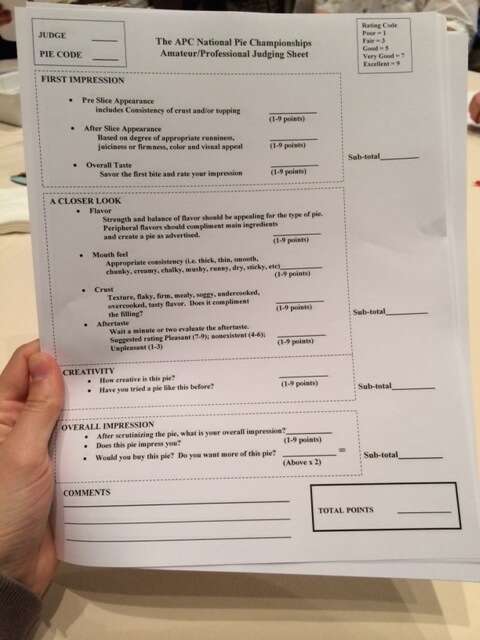 The score sheets provided space for us to give feedback; we were encouraged to keep our comments positive.

Which brings me back to the opening salvo of this post. If you've ever thought about competing, you'll immediately realize there are a lot of differences between making a wonderful pie for your family in your own kitchen and entering a competition. At home, you know where to find ingredients, you know how your oven behaves, and you don't have to really go out of your way to get from inspiration to delectation.

In a competition, you're in an unfamiliar location (unless you already live in Orlando or within driving distance to arrive at the competition with your finished pie by 9 a.m.), and baking in whatever oven is in the hotel suite you're staying in. Looks absolutely matter. Every part of your pie is going to get evaluated and compared to other pies in that category.

It can get hairy, and it's important to have a resilient, never-fail sort of recipe. Francine gave some very good advice at her demo: if you're going to compete, make two of whatever you're entering, so you can taste one of the pies. That way you'll know what the judges are tasting.

As you can see from the score sheet above, looks matter, but only so much. In my category, the best-looking pie was by far the worst tasting. 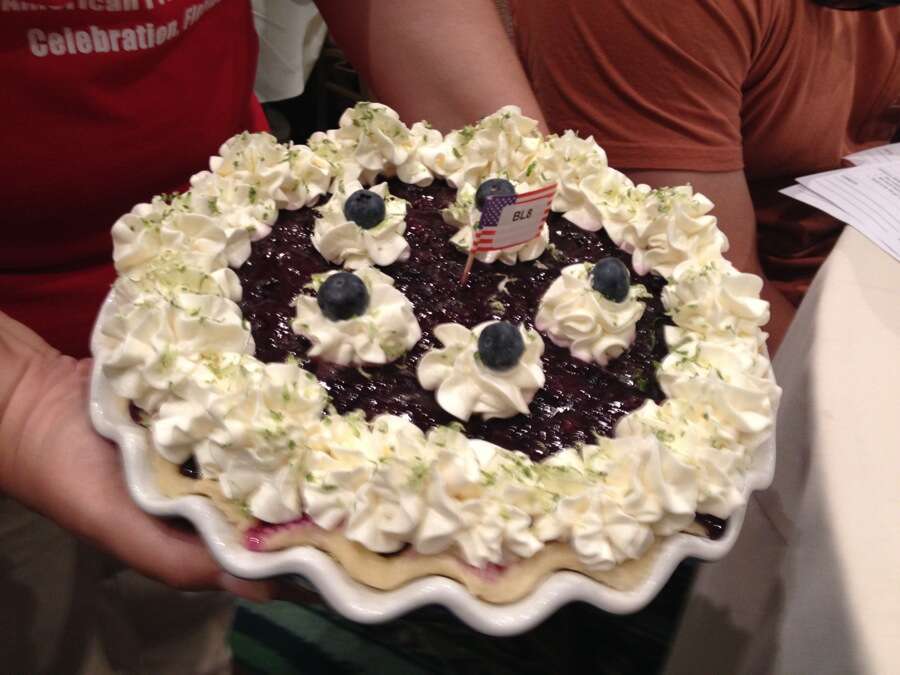 It had lime oil in it, which could be fine, but it had so much that it literally burned the inside of our mouths and overpowered the blueberries completely.

My favorite pie to eat was this one... 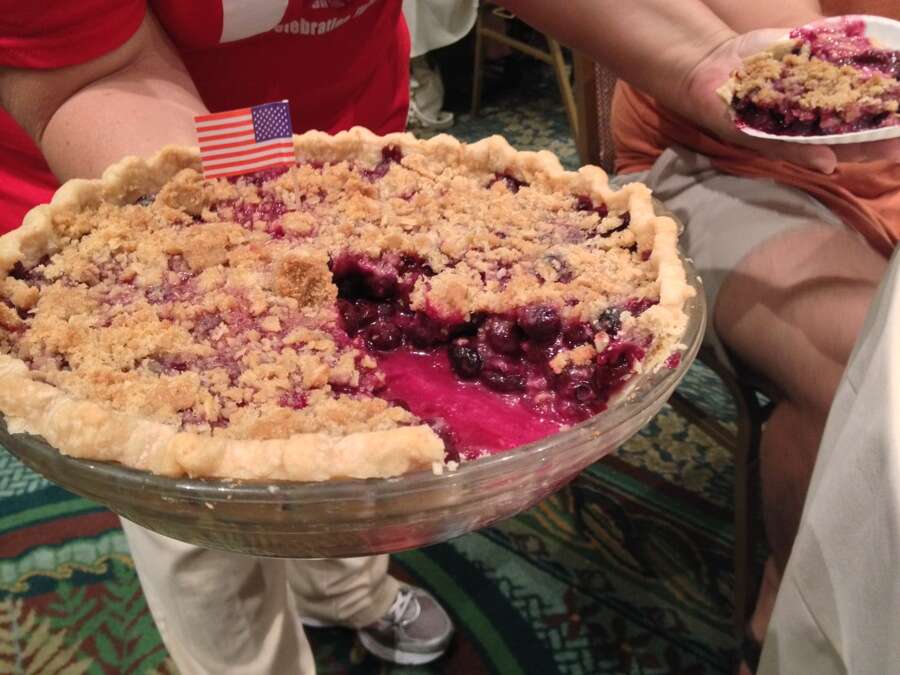 ...a blueberry crumble that was just delicious. It ended up taking third place in its category.

Meanwhile, Gwen was studiously working her way through a LOT of apple pies. 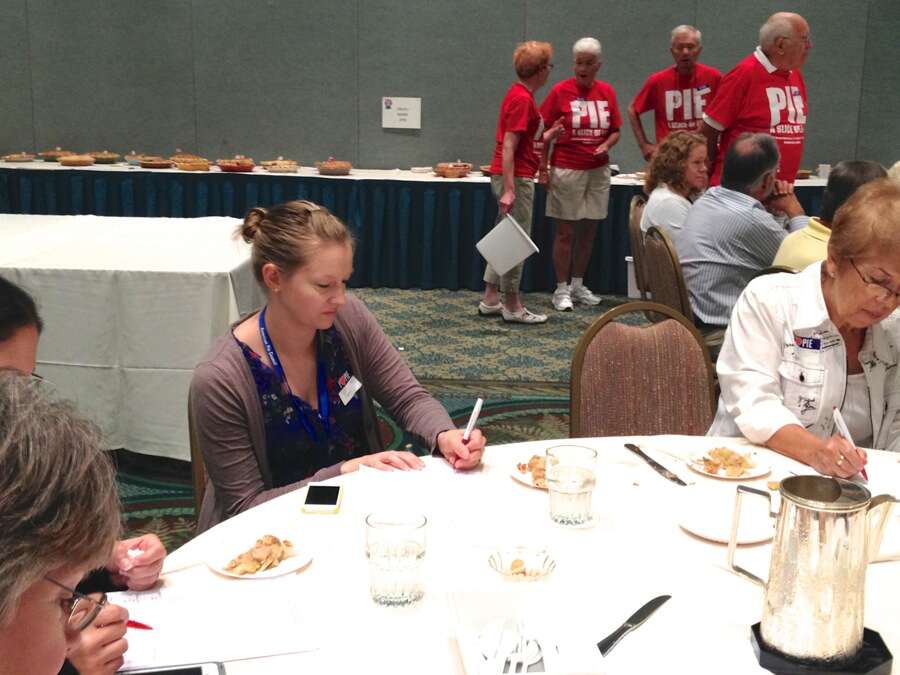 I'll let her tell you about it. 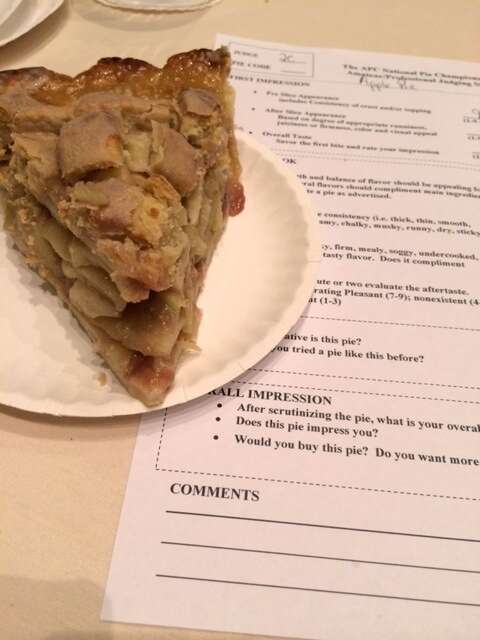 Since apple pie is one of the largest entered categories, it was actually broken into 2 different tasting tables. Each table was responsible for 1/2 of the entries, with both tables meeting at the end with the top 2 pies from each group, to decide the top 4 ranking results.

Having been trained in our sensory panel, I was confident that I would be able to judge the pies' flavor profiles with a discerning palate. 10 pies later with 3 more to go before the finals, my taste buds were feeling pretty fried. 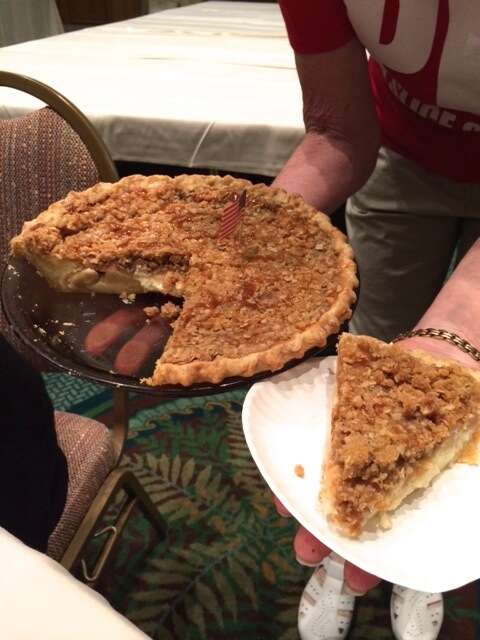 The pie that received the highest marks from ME was this ultra delicious refrigerator pie, that had pieces of vanilla cream cheese swirled throughout the spiced, sliced apples. Even without seeing any other scores, I could tell my fellow judges felt the same. It was the only pie of the bunch that had us scraping our plates clean! 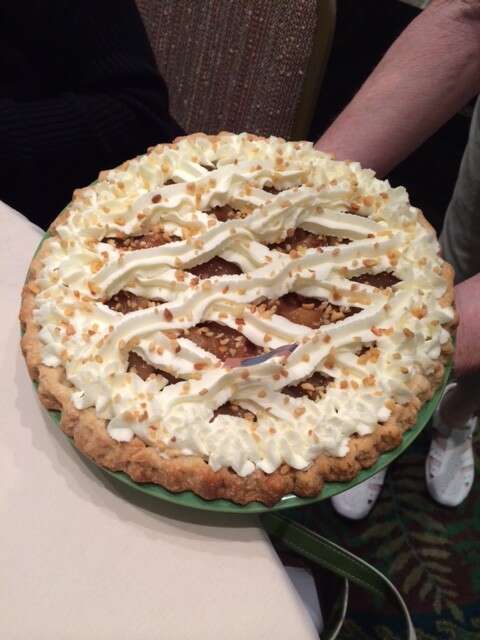 Susan again: Judging took about 3 1/2 hours (that was a LOT of pie!), then it was time to head over to Celebration (a Disney-planned town) where the festival was going on. Festival-goers had lots to see, from the pie wagon... 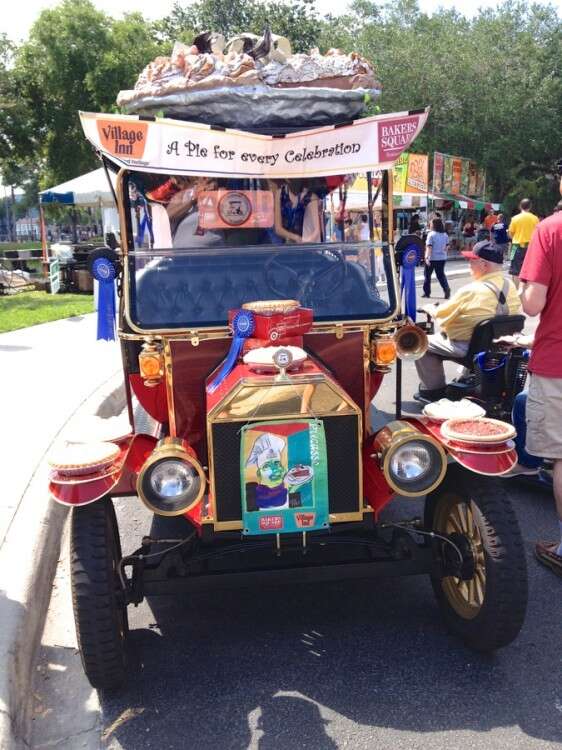 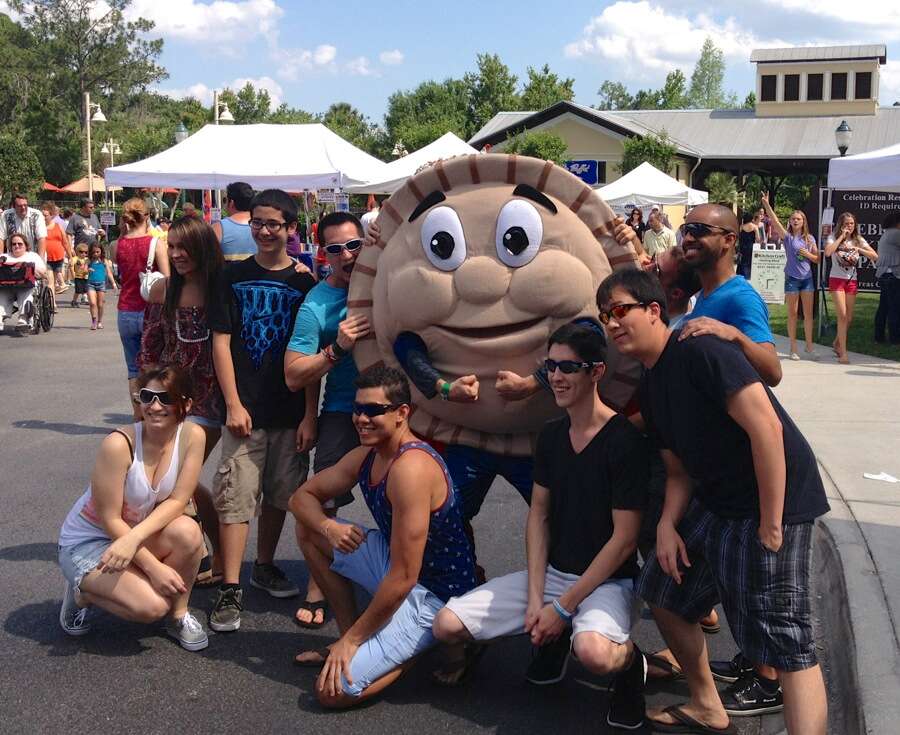 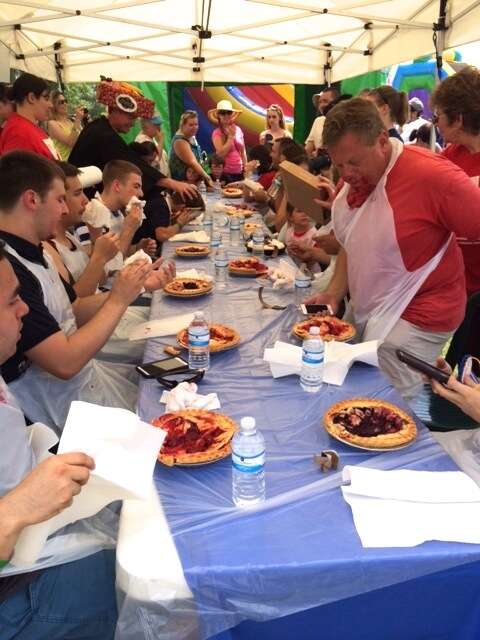 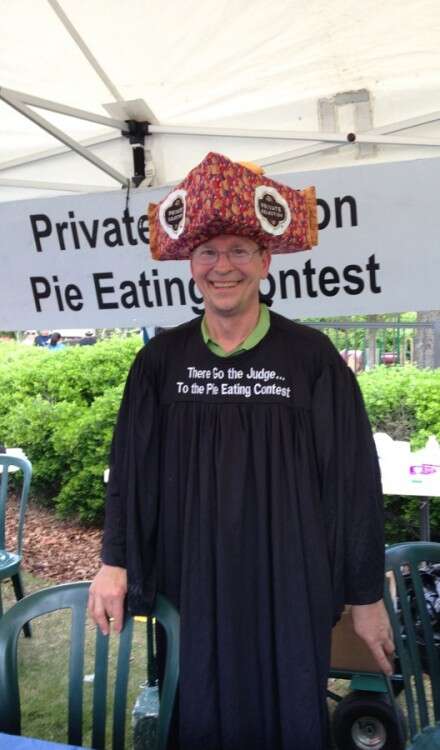 ...near the Pietopia stage, where a constant parade of demos, shows, and even Disney characters appeared. 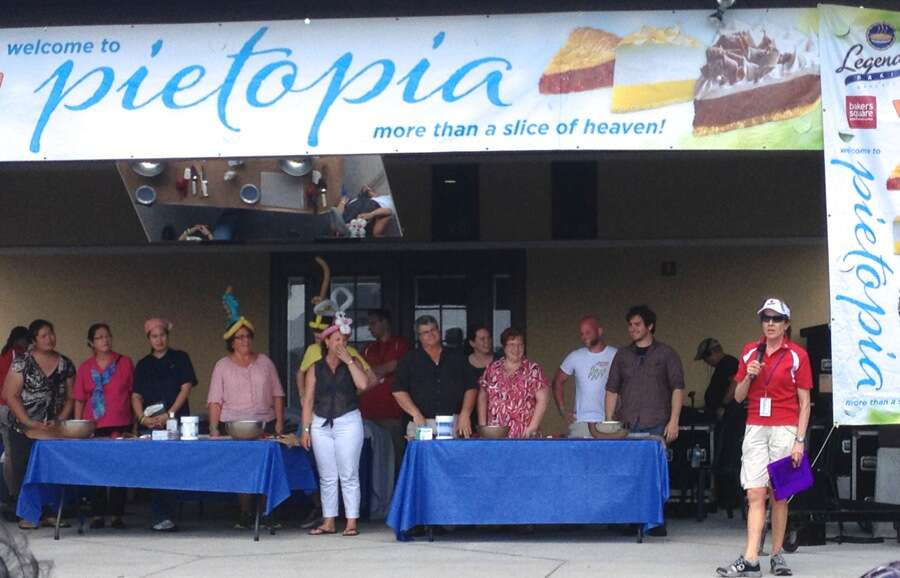 The festival included an apron contest (we judged that, too. The criteria? The looks of the apron, creativity, and quality of the strut across the stage); a pie buffet where you could eat as much pie as you could hold for the price of a ticket; juggling; a team pie-making competition; several vendors for interesting cooking items (including a bit of home: Cabot was there, as was someone selling VT wooden rolling pins), and a booth where kids could roll out pie crust (practice for their future pie adventures). 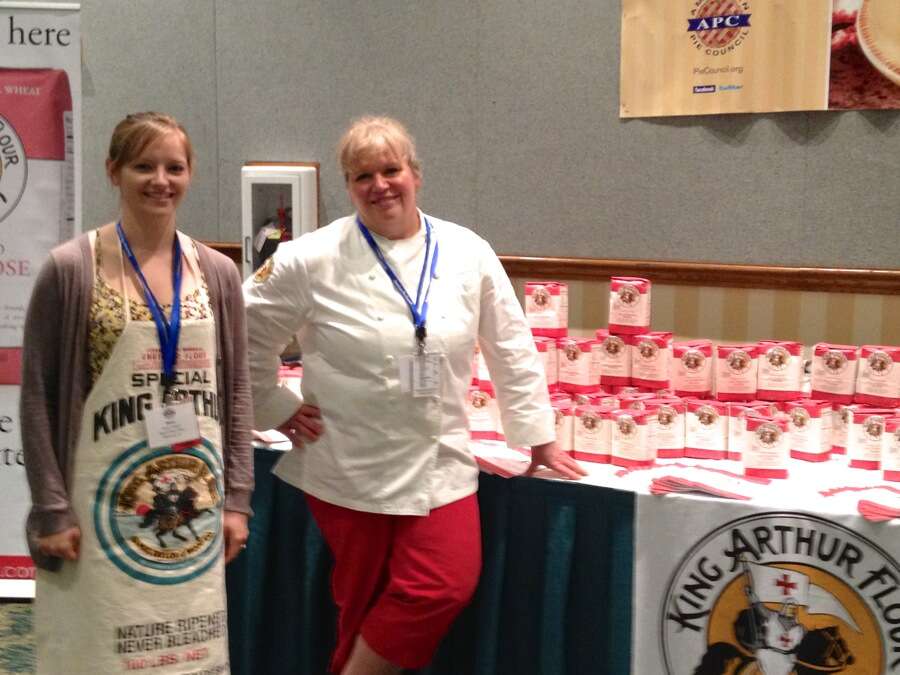 So if you're dreaming of pie glory, I encourage you to visit the American Pie Council's website; all the winners are there, as well as information on entering your masterpiece.

Pie for the people!

Tell me, is there really a lot of difference between the top rated blueberry pies? I LOVE blueberry pie, but it seems good ones are all pretty much the same (unless you get weird with the lime juice). And I'm curious to know if there is such a thing as staying true to the idea of the thing...for example, should an apple pie match the conventional understanding of an apple pie? Is there any place for that, or does anything go as long as it has an apple in there? Thanks for sharing a fun event!
Robyn, you'd be surprised. We had blueberry pies with crumb toppings, some with cream cheese layers, some from fresh berries, some from frozen, some domestic, some wild, some with bit of lemon juice and cinnamon in the filling, some not. I think there may have been pomegranate juice in one of them, which was intriguing. I agree with you in spirit, as long as the sweetener wasn't too heavy handed, and there was a bit of acid to brighten things up, a good blueberry pie can be pretty simple. I find when I judge food that a lot of people who enter are just trying too hard, adding more ingredients than they need to in the quest to stand out, instead of perfecting their technique. There were some ways to win points for "creativity", which, as you can imagine, can be a Pandora's box. Different and unusual can be good...or not! Susan
It was great meeting you both at the Learning Center. Great Demo. Thank you for your support of the event!
We had a great time. I think we were a bit goggle-eyed by the whole thing, and it was wonderful to be part of all that pie energy! Susan
Will some of the recipes for the winning pies be appearing on your website?
My understanding is that the some of them will appear on the american pie council's site once they update it to include this year's event. Susan
I have always wanted to enter this. I have seen it on food network. I was grand champion at The Illinois State Fair in 2007 with my pie.
I give anyone who has the drive and courage to enter a huge amount of credit! Nothing about making the best possible food you can while on the road and overcoming a hundred little obstacles is easy. Congrats on your win in Illinois! What kind of pie did you make? Now I have to know! Susan
Can you tell us more about the judging? Do the judges discuss and reach consensus? Or does each judge score completely independently? Is it like the olympics where the highest and lowest scores are tossed or are they all averaged together? Do judges have to declare any conflicts of interest (e.g., if they know or are related to contest entrants)? Thanks!
Sure. We were coached specifically NOT to discuss any of the pies until after we had given our ratings. The principle being, if someone at the table was a chef or professional, the council didn't want them influencing the other tasters. The council has an entire room full of volunteers double checking the math on each score sheet, then entering them into their spreadsheet to tabulate the results. I'm not sure about conflict of interest; some judges with relatives competing may be assigned to judge a different category. Heaven knows there were enough of them to make that possible! Susan