The fellowship of baking transcends competition.

Team USA bakers carefully move their entry in the artistic category from bakery to judging area. Click on this photo (or any of the photos below) for a larger picture.

At the risk of sounding snooty, it really is the case for a lot of bakers who have experienced the global nature of the Coupe du Monde firsthand to look forward to attending Europain because they'll have a chance to see baking colleagues whom they see just once every four years – in Paris.

That was the case for me today. Amidst the intensity and the tumult of the crowded area in front of the competition, I encountered, unexpectedly, bakers from many countries whom, over the years, I've met with, laughed with, baked with, ate and drank with – and loved and respected as fellow bakers, all of us involved in the good work of doing our very small part to better the conditions of humanity through our efforts.

It was a day with a lot of earnest conversation, a day with eruptions of laughter and tender goodwill, a day with the happy tears of seeing familiar faces for the first time in some years, seeing how the greatest sculptor – Life – has continued the process of inscribing the story of a life on all of our faces. 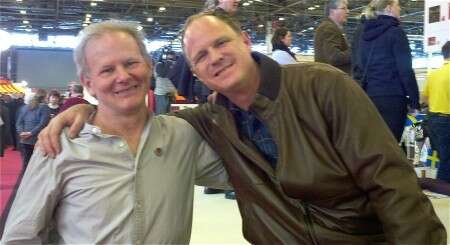 I was on Team USA at the 1996 Coupe, and one of my teammates from that competition, Craig Ponsford, was there. Our arms draped around each other as effortlessly today as they did way back when.

Glen Mitchell was the third team member in '96, and had he been there, it would have been a special reunion indeed. (Both Glen and Craig were Californians, and I used to enjoy reminding them that that was proof that it took two Californians to equal one Vermont guy.)

The air around the Coupe bakeshops was crackling with energy today, both in the stands and in the bakeshops themselves. The US competed, along with Sweden, South Korea, and Senegal. Four teams, four continents. All the teams performed well, hopefully to the best of their ability, and much of their work was startling to regard.

There's no doubt that at this moment all twelve of those competitors are drained to their deepest core, and I hope someone is reassuringly rubbing their tired shoulders right now. The skills and imagination of the teams were extraordinary, and as they walked past the judges with their breads and viennoiseries on shiny platters, the pride on the bakers' faces was as prominent as their exhaustion They did what they could, and then it was in the hands of the judges.

There are always cheering sections for each country, and what a diversity there is in the demeanor of the national fans.

I remember some years ago the Polish fans, dozens and dozens of red-clad rooters, waving the national flag and bellowing as if this were World Cup soccer; I think they were trying to be heard back in Poland.

Today it was somewhat more reserved with the Swedish and South Korean fans; and decibel-loaded energy from the large flag-waving American contingent. 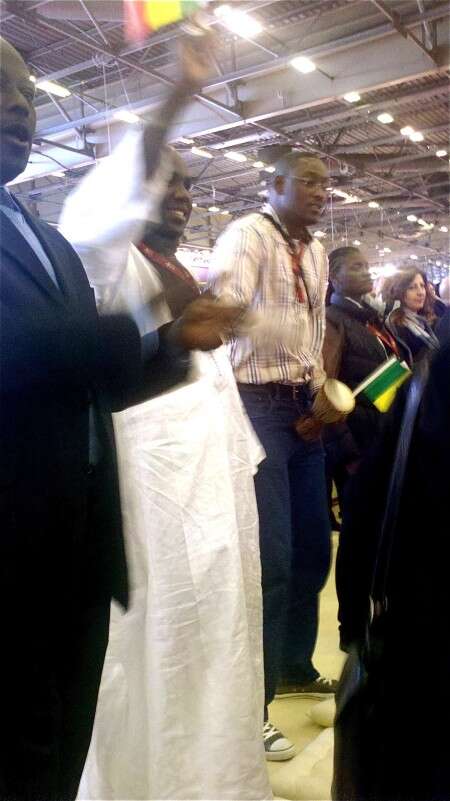 But the prize for enthusiasm had to go to the Senegalese. Although there weren't too many there, they made up for lack of numbers with the exuberance of their cheering.

Women in colorful flowing dress, men in floor-length robes, piercing drums, singing and chanting and laughing and shouting – such national pride! You couldn't help being an honorary fan – go Senegal!

For all the bakers, no matter how they fare, no matter the outcome when the awards are announced on Wednesday – their lives are changed forever, they have taken the stand and made their statements through their work, and the experience will live within them for the rest of their days.

The extent of their impact is yet to be measured, but surely their accomplishments at the Coupe du Monde will contribute to the appreciation and enjoyment of baking for many thousands of people for many, many years to come.

Tomorrow is the last day of competition – four teams and three continents – Japan, Netherlands, Poland, Costa Rica. When they've finished their 8 hours, the 36 bakers of the 2012 Coupe du Monde de la Boulangerie will have built their own unique mountain range.

A stroll through the market.

Thank you for the posts. My daughter and I love to bake challenging baked goods. We felt as if we were there at the show. What a thrill it was to "experience" this great competition. I loved the fact that there was so much fair play between the competitors. It says a lot about the the those involved in this profession. Thank you Mr. Hammelman and King Arthur
Not only is Jeffrey a Master Baker but a generous and patient instructor as well. One of my classmates from KAF was at the Coupe to cheer on team USA, he reports to have had a fabulous trip and the French were gracious hosts. Thanks for the posts.
A number of years ago, my husband and I went to Androuet (restaurant) for dinner. He had steak or something, I opted for a 6 or 7 course cheese meal. It was fantastic! One of my most memorable meals. Nothing but wonderful cheese, tasty fruit and delicious little buns of various sorts. I would go back there in a minute. In fact, the next time I make it to Paris, its a definite.
I returned from a trip to Paris on March 5th, only to read your blog and find out what I missed seeing on March 4th. I'll plan my next trip around the coupe de monde, rather than let my wife plan it around Fashion Week.
Congrats to Naruse-san! Team Japan won the competition. USA second and Taiwan third. Thanks for the reports, Jeffrey and P.J.
Thank you very much for your posts. Jeremey Gadouas is a friend of mine and I've been dying to know how the team has been doing. Your blog as well as the Coupe Louis Lesaffre Facebook page are the only online resources I have found with information. Go team USA!!
I really enjoyed these posts. For me it is a dream to visit Paris and visit some of these places. Keep up the good work KAF!!
I just read through all four days in one go, as I hadn't found the time before. Mr. Hamelman is not only a Master baker, but a wonderfully accomplished and inspired writer. What an immense treat! Merci beaucoup!
Thank you for sharing this experience so eloquently in words and with pictures. I've been reading this blog for a long time now and so appreciate all the recipes and information on baking. I've been a fan of KA products as well. I've bought online and in stores, and I have 3 cookbooks. I don't usually comment, and wanted to let you know that there are people out here who love your blog and read/learn from it. Thanks! Thanks for your kind words, Linda Ann - much appreciated! PJH
Although the byline reads P.J. Hamel, I know you mean Chef Jeffrey Hamelman, don't you? Marti, Jeff didn't have his WordPress password, so I couldn't log in as him to post - but looks like someone figured it out and fixed it. PJH