The people and the purpose

It’s interesting how you strike up a conversation with someone.

While at the Kneading Conference in Skowhegan, Maine, on July 28th & 29th, I was taking this picture of my delectable lunch when the gentleman across the table chuckled a bit (doesn’t everyone take pictures of their food?). I explained that I would be blogging about the conference and was taking pictures of pretty much everything because I just didn’t know what I might end up writing about.

From that chuckle came a conversation. The gentleman’s name was Perry, and he had traveled from Missouri to attend this event. He recently built a wood-fired oven in his backyard and bakes bread in it weekly. Much of the bread is given to his neighbors, “so they won’t complain about the oven.” So far there have been no complaints – only rave reviews. He attended this event because he was interested in learning about more varieties of products he could bake in his oven. 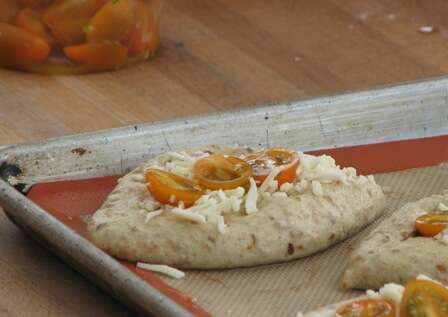 Tom and Lenora drove to the conference from Massachusetts as the result of a 25-year quest to make the perfect pizza. Tom has developed the perfect sauce, perfect combination of toppings, and found the most divine cheese. The perfect crust has eluded him, however, and he hoped to find the answers he sought at this event. 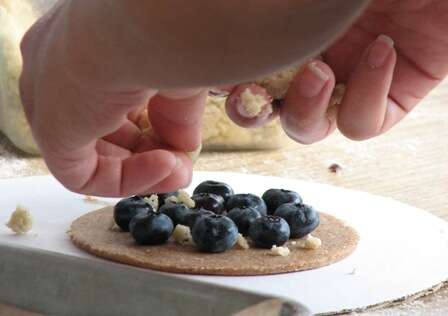 Cindi from Connecticut recently learned her position as bread and pastries teacher at a culinary institute had been cut. She was hoping to find inspiration for a new path to follow for the next chapter of her life. The next chapter begins after she gets back from France in September (color me jealous!). 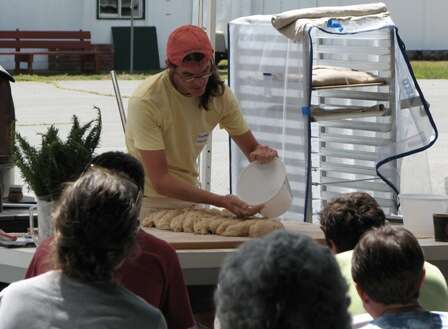 These folks and the different journeys that all brought them to The Kneading Conference was what interested me most about this event. It was great to see so many people with different goals come together as they did.

The novice, the long-time enthusiast, and the professional baker all mingled as one. They learned from the fantastic presenters (Ciril Hitz was my personal favorite), but they also learned from one another. This created a vibe of enthusiastic jubilation surrounding the act of baking with flour. This thought sort of makes me want to dance around in my kitchen tossing handfuls of flour. Is it just me? 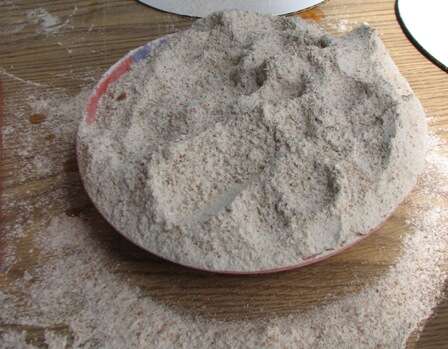 The Kneading Conference does go deeper than simply baking with flour, though.

A major focus of the conference is to build awareness and support for artisanal, local, and sustainable food systems. Our marketing director, Tom Payne, wrote a fantastic post last year about how King Arthur Flour fits into this focus. As he so eloquently put it, “We’re giving our support to the movement to build a knowledge base among practitioners (those millers, oven builders, growers and bakers) so that one day soon Maine – and perhaps other locales around the country – will boast a thriving, sustainable wheat supply.”

King Arthur Flour has very exacting standards for its flours, which is how we're all able to expect perfect consistency when using it. As a company we continue to support a local wheat initiative so that someday local flour may meet those standards. 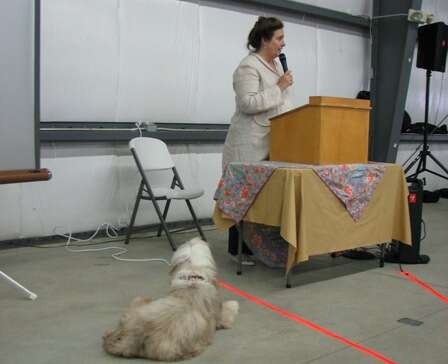 In the meantime, keynote speaker Molly O’Neill (who brought along her shaggy dog, Tootsie) shared a story that brought to light that everywhere is local to someone.

Molly’s family owned a mill for several generations. While she was traveling in Kansas doing research for a book, she kept passing a small mill that looked very much like the one her family had operated. She decided to stop in and talk to the folks at this Kansas mill, and she found out that 200 families in the area rely on the mill to provide employment, and frankly, to keep the little town on the map. If it weren’t for this mill’s primary customer, King Arthur Flour, their little town would be no more.

Lured by the opportunity to combine her love of baking with her communications talents, Terri moved from Minnesota to Vermont in 2011 to join King Arthur Flour as Public Relations Coordinator. An avid home baker, she is often "forcing" friends, family, and co-workers to eat her cakes and other baked goodies. Her favorite part of the job is traveling across the country, meeting enthusiastic King Arthur Flour fans and customers. Terri has a degree in communications from the University of Wisconsin – River Falls and completed her Accreditation in Public Relations in 2012. Prior to joining King Arthur Flour she spent a decade in broadcasting, journalism, PR and marketing.

View all posts by Terri Rosenstock

I take pictures of my food all the time and people often laugh. Let them laugh, it's my life and I'm enjoying it one bite at a time.
Tell me more about Tom and Lenora - If its possible to make a decent pizza in a home oven, consistantly, it's certainly eluded me!
As an avid bread maker I can't believe I didn't know about this conference..........needless to say I'm looking into this.
I was very lucky to be able to travel from Maryland to Maine to attend the Kneading Conference. It was very inspiring to be with so many people who know so much about baking, as well as brick and mud ovens, growing and milling grain, and so much more. I would encourage anyone interested in any of these things to attend next year if possible. I agree, Terri, Ciril was a terrific presenter. I learned alot from him, as well as several others. Ciril's book is on my desk right now. And for any West Coast folks, they are "doin' it" in Washington State in September. First time for the Kneading Conference West: http://kneadingconference.com/kneading-conference-west/. Thanks to King Arthur for being a major sponsor of the conference in Maine.
That is a great introduction... I'm hooked, now may I please have some more? tell us more about the rest of the conference! ;) Glad you are intrigued! You can find out lots more about the conference on their website: http://kneadingconference.com/ ~Terri
I live just 30 minutes from this event. Of course, where I live everything is about 30 minutes away. While I haven't attended the actual conference, I have gone to the Bread Fair. It's amazing and yummy! Thanks for helping to host such a great event so close to my home! ;-)
Perhaps my new bakery owner would enjoy attending next years Kneading Conference which is an Annual Event, correct? Where would I direct him to learn about and sign up for the next one? Thank you for your interest, Paul. Yes, I believe it is every year. I would direct him to their official website called,The Kneading Conference and the Artisan Bread Fair. Have them sign up for their eNewsletter! Elisabeth