Visiting Wichita, Kansas, for the National Festival of Breads in June was a real treat. Born and raised in the Midwest, it was fabulous to be back in an area where it was OK to say “pop” instead of “soda” – and not get a sideways glance. While Kansas is farther south than my Midwestern home in Minnesota, a lot of the landscape, food, and people felt familiar. 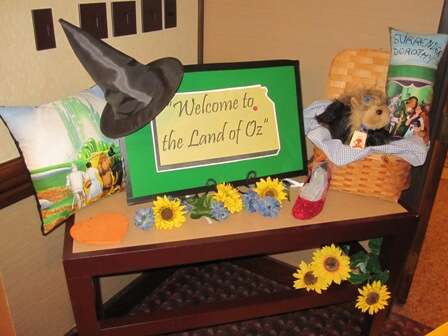 In Wizard of Oz country it’s appropriate to say, “There’s no place like home,” right?

But enough talk about the location. You want to hear about the festival!

The biennial National Festival of Breads is America's only national amateur bread-baking competition. For several years it was a Kansas state competition, but in 2009 the event coordinators at the Kansas Wheat Commission decided to open it up to the entire country. It’s a blast meeting the finalists from across the nation, all with their own regional flair and accent. 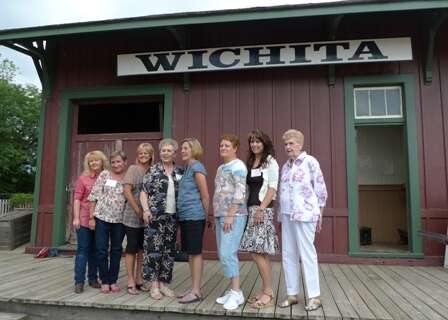 This year more than 500 home bakers submitted original recipes, and eight finalists were invited to participate in the live competition in Wichita.

There were 2 days of activities leading up to competition day. 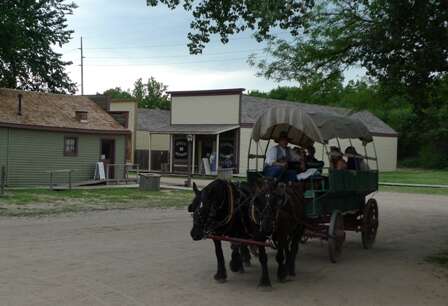 The first day contestants, sponsors, and media were invited to explore Old Cowtown, a living history museum that allows visitors to experience life like it was in the 1870s. 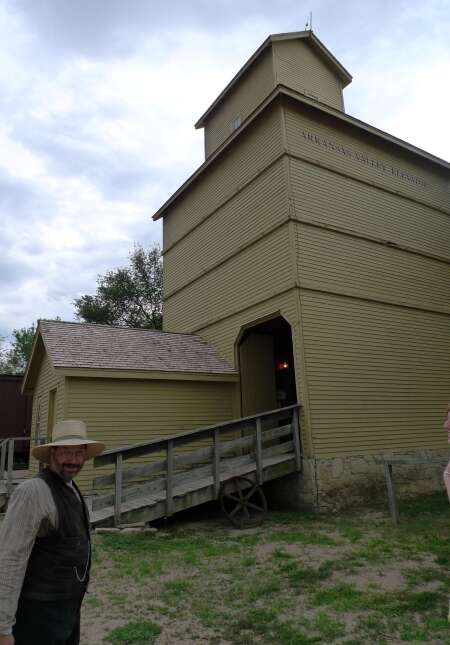 A wooden grain mill in the town provided a historic glimpse of the contemporary milling process we would see the next day. 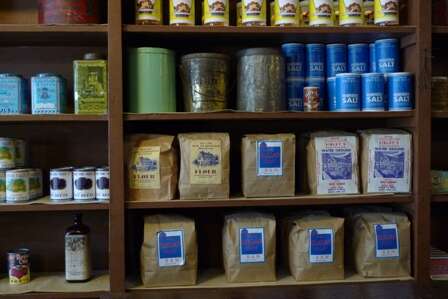 A general store displayed some flour bags that look very similar to the bags seen on the shelves today – although I wouldn’t recommend baking with flour purchased from this particular store. 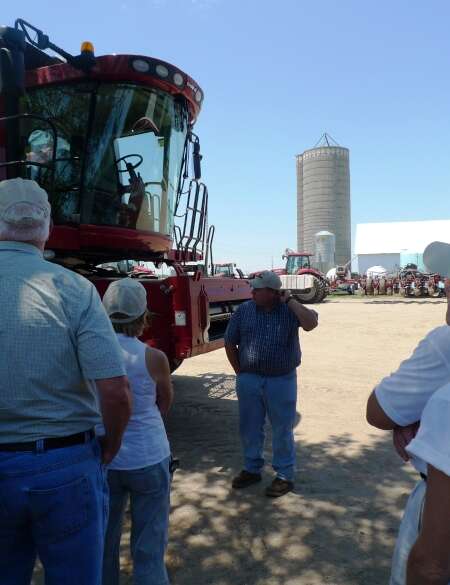 Day 2 was an interactive experience, following wheat from farm to flour bag. We traveled to a family farm… 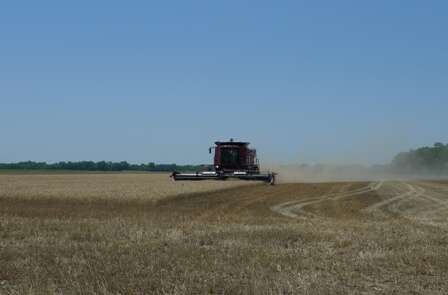 …were given the opportunity to ride in a combine harvesting wheat… 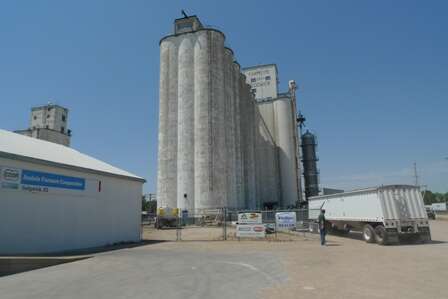 …followed the truck carrying the harvest to the grain elevator… 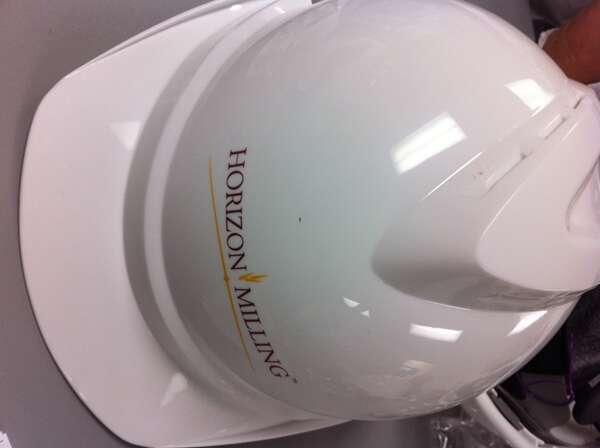 …and toured a flour mill.

Unfortunately no photos were allowed to be taken inside the mill, so all you get to see is the nifty hard hat I wore during the tour. The ear plugs aren't shown, but those were also a necessity. It's incredibly loud in the mill.

Throughout the day we learned how little the flour process has changed in hundreds of years. Of course, technology has made everything more automated, and individual farmers are able to grow and harvest more wheat. But the basic string of events and overall procedures remain very similar to what has been done for many generations.

Day 3 brought us from flour bag to fork. Competition day! 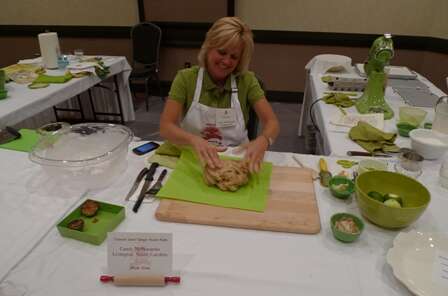 The eight finalists were provided color-coordinated kitchens in the grand ballroom, where they baked the day away as the public stopped by to watch bread-baking demonstrations, learn fun facts about Kansas wheat, and purchase lots of goodies from the Great American Bake Sale (proceeds went to Share Our Strength). 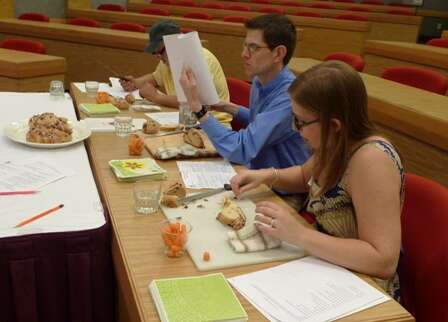 By the end of the day, the delightful aroma of fresh-baked bread was wafting through the entire building. And the judges (Melissa Knific, assistant food editor for Family Circle magazine, Aaron Clanton, baking curriculum manager at AIB International, and Naji Toubia, owner of Bagatelle Bakery in Wichita) had the difficult task of selecting a winner. Having witnessed a portion of the judging proceedings, I know they took their time discussing every aspect of the finalists' creations. 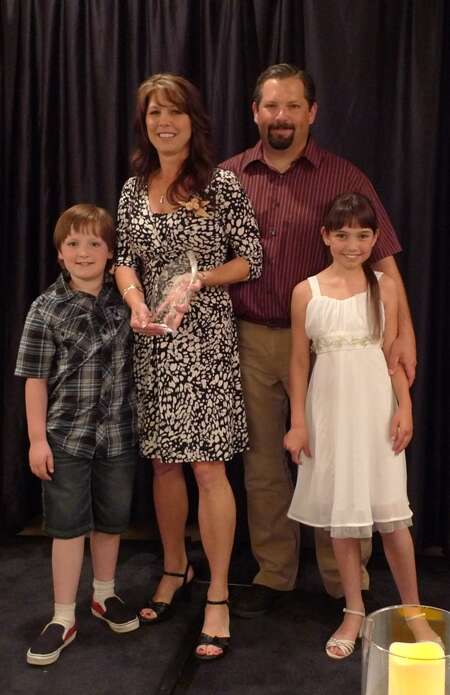 That night the winner was announced: Gale Collier of Redmond, Oregon, won with her Quick Raisin Granola Breakfast Rolls. She happily accepted her award as her husband and children beamed with pride! The huge, glowing smiles of her children were contagious. You know these are two future bakers! 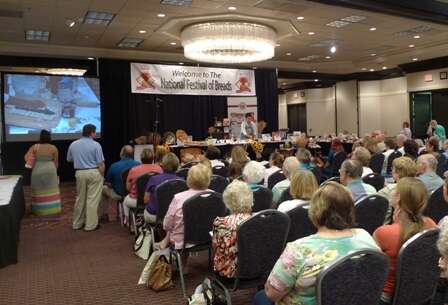 About 500 people attended the festivities on competition day. I hope more than 1,000 attend in 2013! The coordinators of the event – Cindy, Bill, Julie, Aaron, and so many others at Kansas Wheat – worked tirelessly to create an experience that truly builds an appreciation for wheat and the process it goes through on the way to the table. I know I will never look at another bag of flour the same way again, and I'm sure the finalists and other attendees won't, either.

If you’d like to learn more about what goes into a bag of King Arthur Flour, check out our new video series featuring some of the farmers who grow wheat for us. And start working on your recipe now to enter into the next National Festival of Breads. The request for submissions will come out sometime in 2012, so keep an eye out for it. 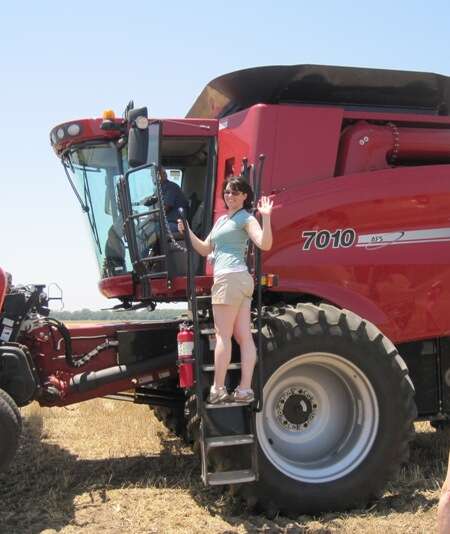 Until next time, Kansas.

Lured by the opportunity to combine her love of baking with her communications talents, Terri moved from Minnesota to Vermont in 2011 to join King Arthur Flour as Public Relations Coordinator. An avid home baker, she is often "forcing" friends, family, and co-workers to eat her cakes and other baked goodies. Her favorite part of the job is traveling across the country, meeting enthusiastic King Arthur Flour fans and customers. Terri has a degree in communications from the University of Wisconsin – River Falls and completed her Accreditation in Public Relations in 2012. Prior to joining King Arthur Flour she spent a decade in broadcasting, journalism, PR and marketing.

View all posts by Terri Rosenstock

Thank you for sharing such a great experience with us..
I'd love to know; what is "uffda"? It's Norwegian for anything from "Oh, golly," to "What a surprise!" to "Stop! Stop!" In other words, an all-purpose exclamation of surprise and/or urgency. At least that's how my great-aunts and Norwegian Bachelor Farmer great-uncles used it! :) PJH
You might want to consider holding a future contest in Annville, PA - home of the oldest continuously operating flour mill (since 1750) in the USA. See www.fooa.org, or Google Annville Flouring Mill. Or Sandwich, Mass. - home of the oldest continuously operating grist mill in the U.S., Dexter's Mill, grinding corn since 1654... PJH
Sounds like a LOT of fun! I love POP! ahha.. being from the suburbs of Chicago. I now live in NC for 10 yrs and its not been easy at times... I bought some King Arthurs White Wheat the other day and decided to make a quick french bread recipe I use all the time with that flour. My stepson could NOT stop eating it. Two loaves were gone in a day so I made more yesterday. Who knew? Thanks for this adventure you took us on. I hope 2013 has many more participants! Good Luck!
Wow! did this post bring back some memories. I'm from KS and my family members were wheat farmers near Colby. I remember riding in the combine as a kid with pop, sunflower seeds and a stack of comic books (Casper and The Archies were my favs). We would take turns driving the grain truck (or if you drew the short straw, you got to shovel grain in the back as the wheat was cut). It was hot work, but there is nothing like the smell of freshly cut grain! God bless the families that are still carrying on the farming tradition. Makes me long for home :) Thank you for sharing these beautiful memories with us. It's great to have people like you to help promote and strengthen an appreciation for our food sources and the labor that is involved. ~Amy
I'm looking forward to some nice whole wheat bread and foccacia recipes.
Hmmm, no men were finalist. Could this be a conspiracy? I hope to see bakermen represented next year ;) Maybe you should enter! :) There was a dearth of bakermen sending in recipes... PJH
Pat B - I grew up in a suburb of St. Paul. Lived in Hopkins for a couple years. Also spent five years in Alexandria before moving to New England. Hot dish is another one that no one seems to know around here. I've gotten some giggles out of oofda as well. :) Uffda! I have an "Uffda!" T-shirt, believe it or not... PJH
You did not say what part of MN you are from. I understand what pop is. I also understand what hot dish is and that the hot humid weather we have been having is corn growing weather :) Looks like you had a great time-though I would have asked to operate the combine.
Congratulations Gale! I am from Washington and my husband and I drive through Redmond on our way to Bend, OR. every week for business. The area around Wenatchee, where we live, and the wheat growing area in Oregon looks much the same as the pictures shown here. I can't wait to try Gale's winning recipe. And maybe, I will look her up next time I'm in Redmond and see if she has some rolls in the oven! ;-)

From field to flour

Vermont to Kansas and back again

Flour matters: a journey to the Heartland