Soft and sweet as a Southern breeze

I still remember my first bread pudding, back in the early 1990s...

I had just begun dating my husband and was spending the weekend at his mother's house. She suggested bread pudding for dessert. I had known my own parents to eat bread pudding, but certainly no one under the age of 50 ate it. In my mind bread pudding was a grownup dish; something no one really liked, but you ate it when you got older – like liver, and Grape-Nuts.

Still, to be polite I didn't say anything,  planning to have a “no thank you” helping.  Once the pudding was baking, though, the rich, custard-y scent filled the house, overlaid with cinnamon and caramelizing sugar. Maybe this would turn out better than I  had thought.

Oh, the first bite. Warm from the oven, slathered in whipped cream, it was delightful. Bread pudding is definitely a baked good that you experience with your nose as much as your taste buds. You inhale the cinnamon scent at the same time the caramel-y custard-y goodness hits your tongue; then you get the coolness of the whipped cream on the roof of your mouth. It's a very sensual experience.

I became a convert that night and have enjoyed bread puddings of all shapes and sizes for years, despite still being under 50.  When Sue Gray began testing this New Orleans Pecan Pie Bread Pudding recipe, using pecan pie filling as a base, I was nearly on my knees in gratitude. Combining two of the best desserts on earth made Sue a goddess in my eyes (and not for the first time).

I have been in love with our Pecan Pie in a Jar for a couple of years now and don't really make pecan pie from scratch anymore. The slight hint of marshmallow in the filling just rocks my world.

Rock along with me and make New Orleans Pecan Pie Bread Pudding: 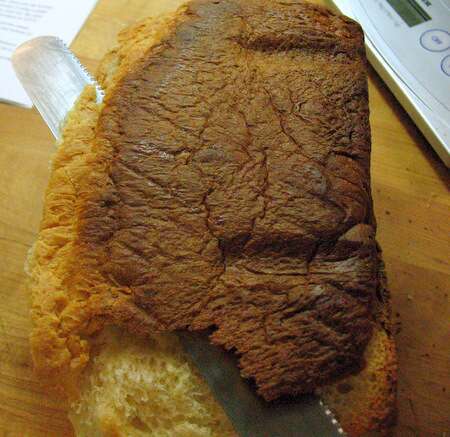 For the bread, you'll need about 11 to 12  cups of bread cubes. That's roughly a 1 1/2 pound loaf after the crusts are removed.

I felt like one of those fancy cake carvers as I sliced and diced my bread. 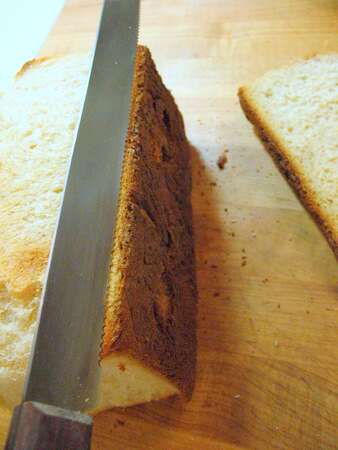 Your cubes should be around 3/4" square. Don't sweat the size too much, they should be about the size of of a square Kalamata olive, or a Yahtzee die on steroids. 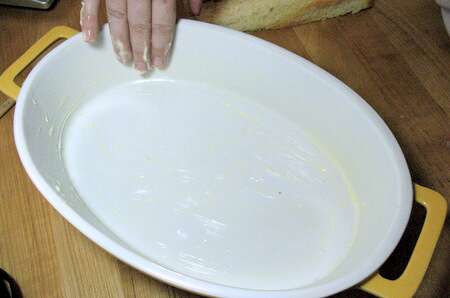 Generously butter a 2-quart baking dish. During the winter, I like to use my hands for this; I'll take all the moisture and softness on my hands that I can get. 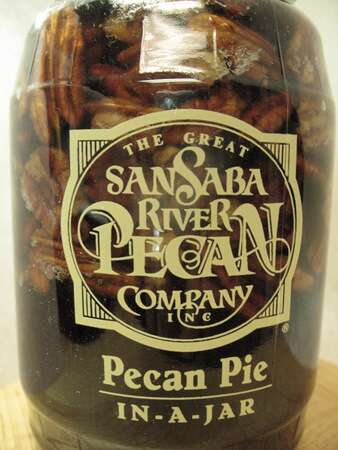 The real star of this bread pudding is this amazing Pecan Pie in a Jar. Just look at the amount of whole pecans packed in there. The syrup is sweet but not cloying, with just a hint of marshmallow... and very thick.

You'll need to microwave the jar for about a minute, uncapped, to soften and loosen the filling from the jar. 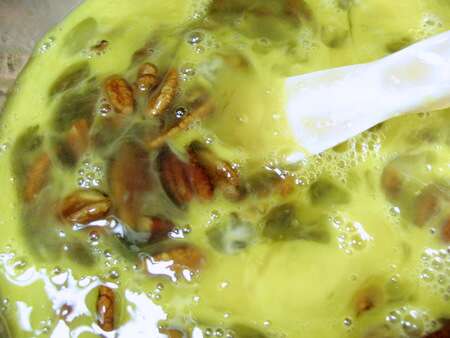 In a large mixing bowl combine:
• one jar Pecan Pie in a Jar
• 6 large eggs

Stir to break up the eggs. 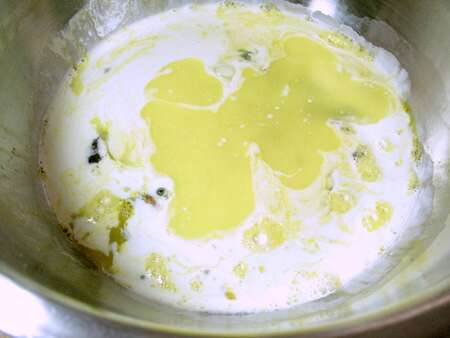 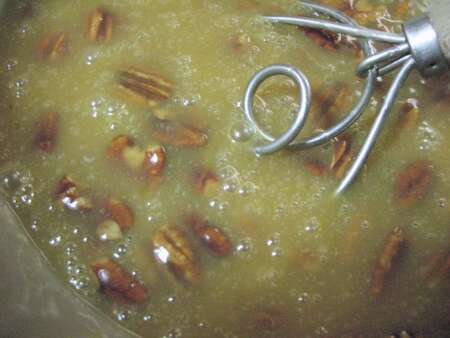 Whisk the ingredients together until well combined. I found that a Danish dough whisk worked particularly well for this as it allowed the pecans to pass through unbroken, but combined the other ingredients beautifully.

Using a slotted spoon, scoop out most of the pecan halves and save for topping the pudding before baking. 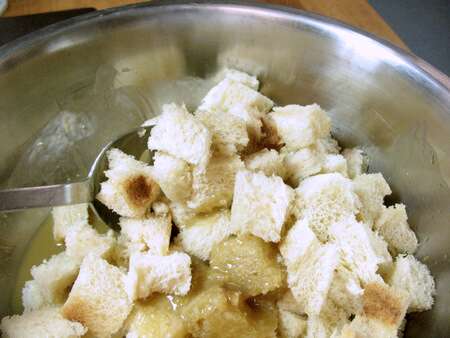 Press the bread into the syrupy goodness until it's soaked evenly. Spoon on the reserved pecans. 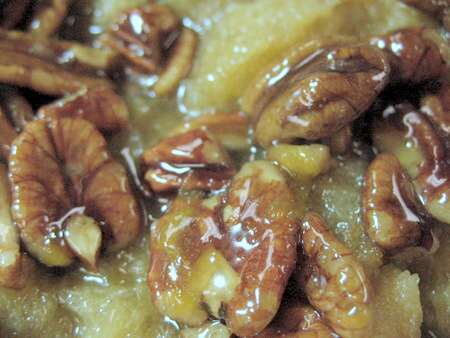 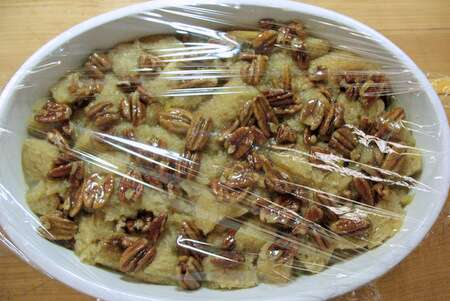 Cover the dish with plastic wrap and allow to sit at room temperature for about an hour.  You can also prepare the pudding to this point and refrigerate it overnight, covered. 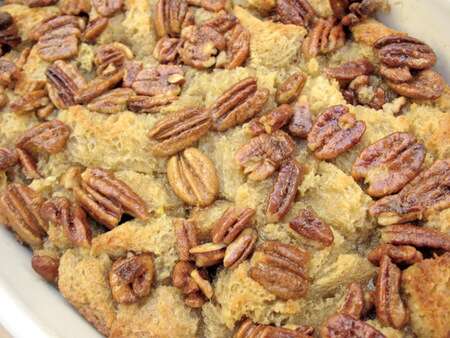 Bake the uncovered  pudding in a 350°F preheated oven for about 45 to 55 minutes.  The center will be set and will spring back when lightly pressed. No wet pockets should remain.

The top cubes of bread and pecans will be lightly toasted and golden brown. These are the pieces that family will fight over, the caramelized crispy bits.

Serve the bread pudding warm with vanilla ice cream, freshly whipped cream, or even whiskey sauce to put a tingle in your toes.

** Don't have Pecan Pie in a Jar? I tried the recipe using my favorite Pecan Pie filling recipe, increasing the eggs to 6 to cover what is in the original recipe here and it works just beautifully! **

Bread Pudding with nuts looks very delicious and mouth watering.
This looks and sounds amazing.........I'd like to have alittle more custard, so it would be just alittle wetter.......anyone know how to do that ?? Try adding 2 more eggs and 1/3 cup additional milk - that should work. Good luck - PJH
I am 66 yrs. old and have been making New Orleans Bread Pudding that my grandmother taught me. And it is nothing like the one above. Bread pudding should be made using French Bread that has gone stale (or put in the oven until it is very crisp). Now break it up in a 2 qt. pitcher and pour in the milk. (Be sure to use all of the crust) Maxh down the bread until it has absorber all of the milk and then add some more milk. In another dish, put in 2 sticks of BUTTER that is soft but not melted. Add 1 1/2 cups sugar and mix. Add 2 teas. vanilla and 6 egg yolks. Stir until all is mixed very well. Pour the bread mixture into a 9 X 13 pan and then slowly incorporate the egg mixture until it is well blended. DO NOT USE ANY METAL IN THE PREP. OF THIS PUDDING-NO PANS, NO SPOONS, NO BOWLS, NO DISHES IN WHICH TO COOK THE PUDDING. A this time you may add golden or black raisons if you wish. Put into a preheated oven at 350 degrees and bake about i hour. It will seem not cooked when you take it out of the oven, but it is. Let sit while y ou make the meringue. Put the 6 egg whites into a mixer and beat until the whites begin to froth, add sugar slowly ( about 1 1/2 Cups and a pinch of cream of tartar. Beat until the meringue holds its peaks. Now put it over the bread pudding. do not smooth it out. Dip the flat end of your knife onto the meringue and pull upward until it realised the meringue. Now you have made a curl. Continue until there are as many curls as you think looks great. Return to the oven and continue to bake watching carfully. You want the meringue to be golden brown, not dark brown. Can be served with Rum Sauce, which is also delicious. Thanks for sharing your family recipe! Frank @ KAF.
when I made your pumpkin bread pudding after Thanksgiving last year, I wasn't happy with the soggy texture of it for leftovers either. Maybe I just didn't like it cold so I solved that by slicing it after it was cold and firm the next day, and toasting the slices in a frying pan with a little butter. It brought back a childhood memory of sharing grilled sticky buns with my dad at the neighborhood diner. WOW! That sounds amazing. Definitely going on my "try it soon" list. ~ MaryJane
Mmmm... I would make this with a brioche bread. I have also made Chocolate bread pudding using day old croissants (from Costco, sorry!) and a decadent chocolate sauce for drizzling.. I love pecans, but I'm the only one in my family who does, I'm afraid! No worries about using Costco, personally I'm in love with the blueberry muffins from BJ's clubs. You could try half pecans and half walnuts to see if you can lure some more family members into the fold. ~ MaryJane
Holy moly.....I cant even imagine how decadent that is. Why oh why do you post recipes like this???? Why not post recipes like....lettuce....or celery stalks. But noooooo, you have to post these. I cant wait to order the Pecan Pie in a Jar, Im going to make pecan pie filling and I am sooo making this recipe this weekend.
Oh my! Bread pudding (capirotada) is a very popular dessert here in Mexico, especially during Lent. I can't believe that you've combined two of my favorites in one dessert! I cannot wait to try this recipe to impress my Hubby and in-laws! :)
Would this work using Gluten Free bread? Yes, it should work just fine. Enjoy! PJH
@fran16250 - I think some of us (me, at least) don't like bread pudding because we don't like the texture of soggy bread. When I was young my mother used to make a breakfast casserole with eggs, bread, cheese, and sausage, and while I like the flavor the texture was not right for me. That is why I have tried bread pudding only a time or two. This recipe makes me want to give it another try. Thank you, Mary Jane. I'm so glad you're giving bread pudding another try Tom. You might try baking in two smaller casseroles to make the pudding a little on the drier side, if squishy isn't your preference. ~ MaryJane
all right! I yield! I yield! You win! I will place an order this week after payday! Can you take a break now from showing me MORE stuff that I can't live without? Geez. First the acrylic pizza wheel, then the grains for breads, and now pecan pie in a jar? I knew you people were cruel, but this is beyond the pale! ;P As an aside... why do you cut the crusts off? Just personal choice? I always leave the crust on my bread, provided it isn't too crusty... Oh, honey, we didn't mean to torture you. Just wait til we break out the chocolate :). You could leave the crusts on if you like. It does hinder the liquid absorbing into the bread, but it's not a deal breaker. ~ MaryJane