Every year King Arthur Flour sponsors baking contests across the nation at county and state fairs; this year the list tops out at about 70! The fair activity peaks in August and September, which means we spend a lot of time during those months sending prizes and receiving lists of winners accompanied by photos and interesting stories.

My job here at King Arthur Flour involves planning and executing all of the baking contests. At the beginning of August, I took a trip out to the Ohio State Fair. WOW! The Ohio State Fair is the largest fair I have ever visited. It stretches across a major thoroughfare, and the parking lot is filled with cars as far as the eye can see; shuttles are available to transport fair-goers to the entrance. 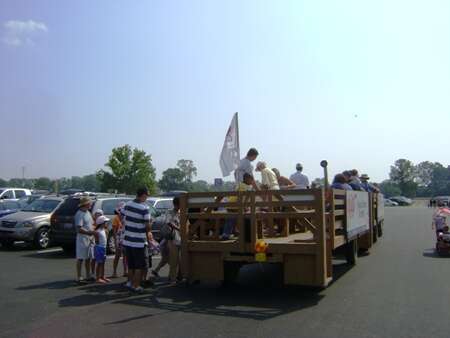 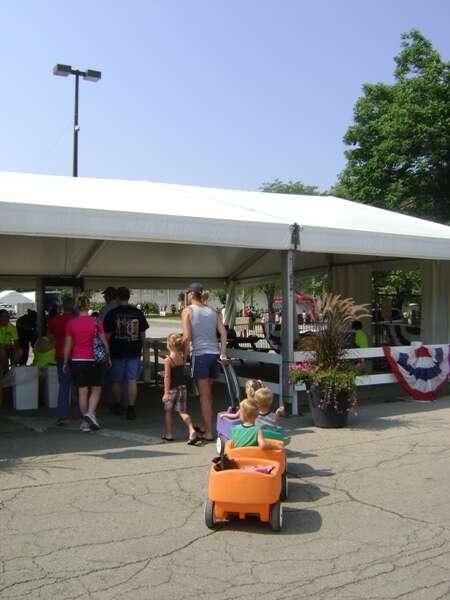 My 24-hour stay in Columbus included making  personal connections with the contestants and the folks behind the contest scenes; spreading the word about our Traveling Baking Demos, heading to Ohio in October; and taking lots of photos for our blog! 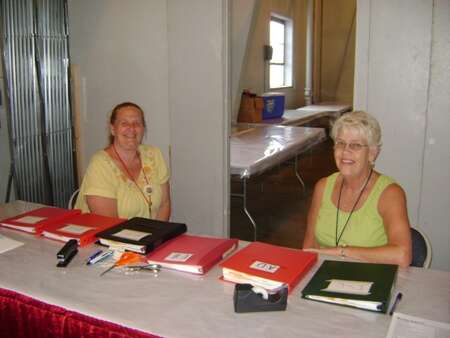 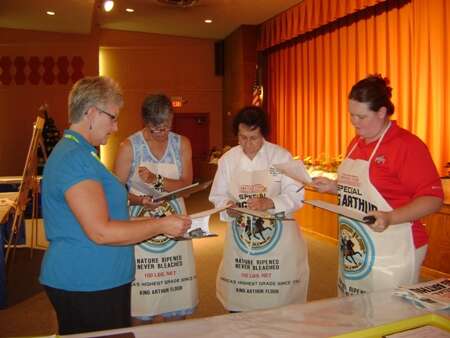 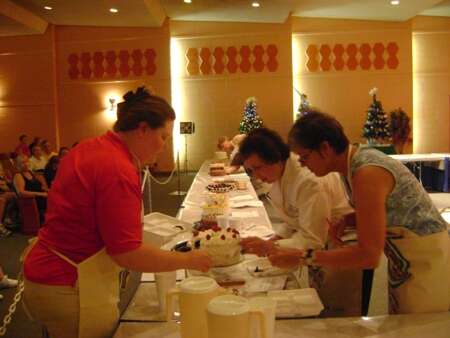 A look behind the scenes. The judges focus on taste, texture, and appearance as they examine and taste each cake. 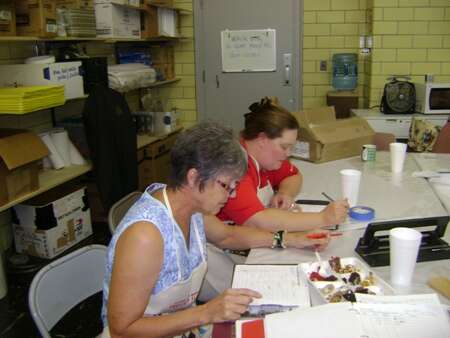 I announced the winners. 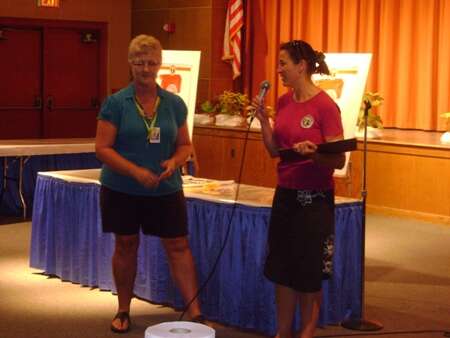 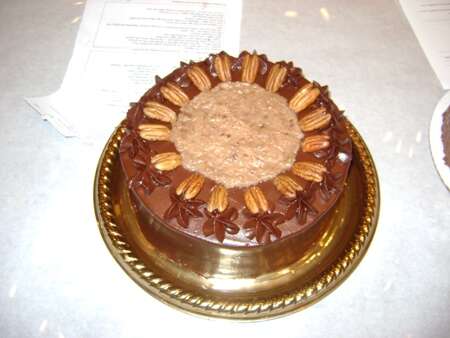 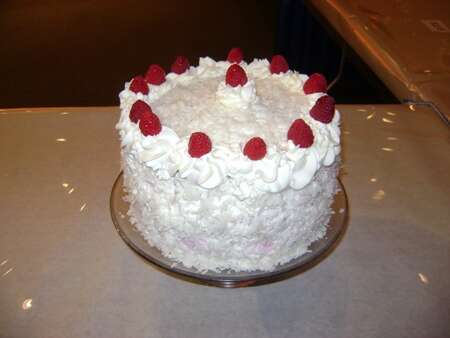 And the blue ribbon went to Jody Benton of Ashland, Ohio, for her delicious Grandma Eikenbary's Carrot Cake. 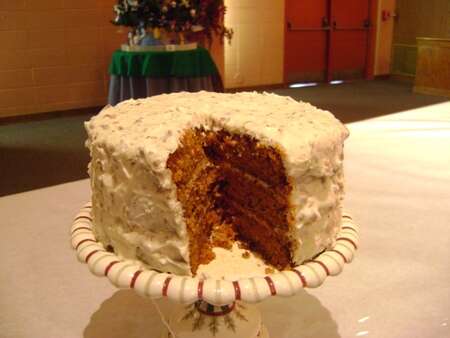 A flow of happy tears ensued when Jody heard her name. Jody was so proud; here she is holding her blue ribbon behind the winning cake. 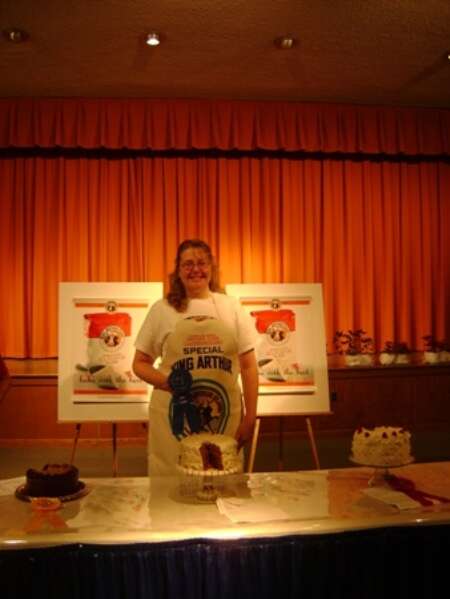 Jody was accompanied by her husband and their youngest daughter, a baker herself. 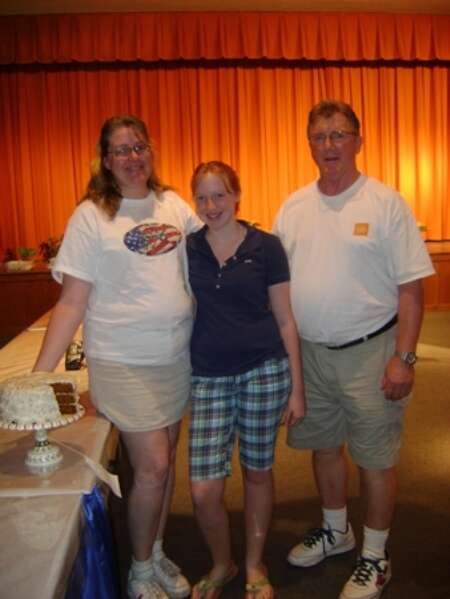 NBC Channel 4, Columbus, had slated 2 minutes live with the winner of the Great Cake Contest to air on the evening news.  I was encouraged to participate in the segment; a chance to be discovered! 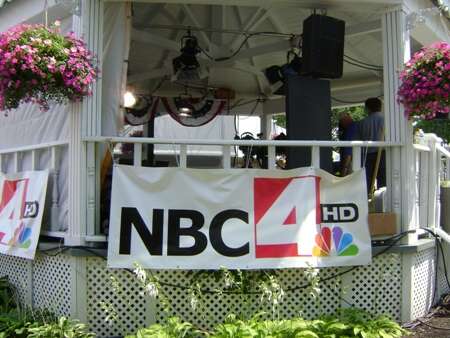 Colleen Marshall, the NBC evening anchor, was wonderful. Jody and her daughter did a fabulous job remaining calm and focused during the interview. I stood by their sides proudly displaying my King Arthur Flour logo - alas, no calls from Hollywood... yet. 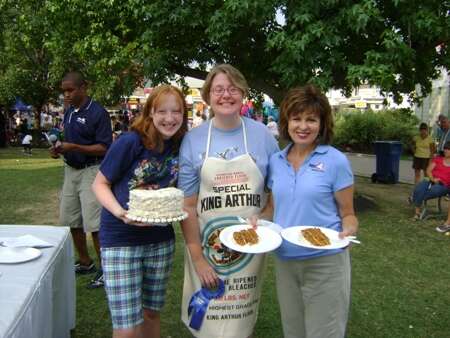 The Great Cake Contest takes place at 15 different fairs from Pennsylvania to California. Of the 15 blue-ribbon winners, one recipe will be selected by the experts in the King Arthur Flour test kitchen for a grand prize: either a $500 King Arthur Flour shopping spree, or a trip to a class at our Baking Education Center in Norwich, Vermont. You had better believe I will taste that carrot cake when it takes its trip around the KAF test kitchen!

One last photo to share. You know you're at a fair in Ohio when... 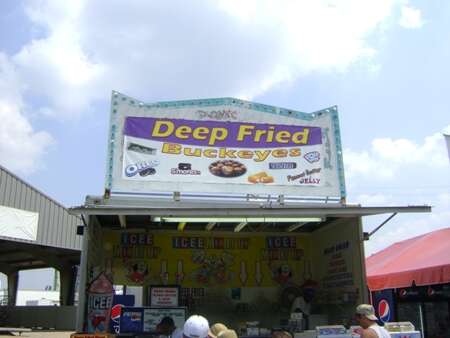 ...deep-fried Buckeyes are on the fairway!

Interested in entering a contest at your favorite local fair? Check out the list of fairs hosting King Arthur Flour baking contests; it may not be too late!

Just found this while surfing King Arthur and the fair. Are you still in charge of competition at the state fairs? I just won King Arthur Gluten free contest at the California State fair July 15, 2019. I made corn sticks baked in a cast iron pan. Three years ago I won the your gluten free contest at the California state fair with "Candy Apple" cupcakes. Besides the gluten free flour they featured the boiled cuder you carry
Hi Jennine! We sponsor many baking contests each year. You can view the full list here. Congrats on your win! Annabelle@KAF
It's so exciting reading your coverage of the King Arthur Flour Cake competition at the Ohio State Fair. A whole-hearted midwest Iowa invitation to our Iowa State Fair is just for you. In Iowa, King Arthur sponsors the yeast bread and rolls competition, and it is so much fun!!!! You should see the rows of tables that are completely filled with entries. It is my understanding the food competition at the Iowa State Fair is the largest in the country.We have some awesome bakers in our state! I would love to meet you in Des Moines next August!
please come to the Texas State Fair!! Laurie, I've passed your request along for next year- PJH
...just posted a comment but misspelled diastatic malt powder. Sorry.
You know, having lived in Ohio all my life (I decline to mention how many years that is! LOL!) but I've never made it to the Ohio State Fair. If I realized KAF was going to be there that would have been even more incentive to go. The cakes look so yummy and I can't wait to see who the winner is! I loved your comment about the buckeyes also. I've never tried a fried one but I bet it's delicious! I recently attended a wedding where both the bride and groom were OSU grads. The colors of the wedding were scarlet and grey and each guest received an individually boxed buckeye as a favor. I'm so excited to see that you're coming back to Ohio. I caught your class in Dayton a few years back and had such a good time! I'll have to check my schedule and see if I can make it to your next visit. Thanks so much for all you do! We hope you can make it! Elisabeth @ KAF
Jeni's makes great ice cream. I like the non-traditional flavor combinations that you can't get anywhere else. Thank you for mentioning the Columbus stop of the Traveling Baking Demo team. I am going to put this on my calendar. It sounds like fun.
I hope you had a chance to taste Jeni's Splendid Ice Creams while you were in Columbus. I live in Cincinnati and am planning a road-trip just to eat more Jeni's...... Emily - I did not have time to visit Jeni's, but I will add it to the list of stops when the Traveling Baking Demo team returns to Columbus on Friday, October 1. Will we see you in Mason on Saturday, October 2nd at the Cincinnati Marriott Northeast? JMC
sigh, i missed you guys, i was there on the 5th. totally should have done some more research and then i would have known you were there too! either my grandma or great-grandma won 2nd or 3rd prize at the ohio state fair for her chocolate cake... don't ask me what year that was. baking is in my blood (remember details, no so much)
Oh ~ some of the best days of summer ... state and county fairs! My children {now grown} loved participating in our county fair... What an experience... from gathering chicken eggs to walking around as Elmo to working in the communications office! They treasure these memories! What fun! and Congrats to the winners... the cakes look marvelous! ~Maria