Tzatziki: the best thing to happen to low-fat yogurt since smoothies.

This yogurt-based spread/dip/salad is a must at most Greek-style meals. Including cucumbers, garlic, and mint, with a touch of cumin, it's very similar to India's raita.

Once you see how easy this is, you'll find yourself reaching for that big container of plain yogurt in the dairy section over and over again. Because, trust me – you'd be hard-pressed to find anything better to do with plain low-fat yogurt than make it into thick, rich tzatziki. 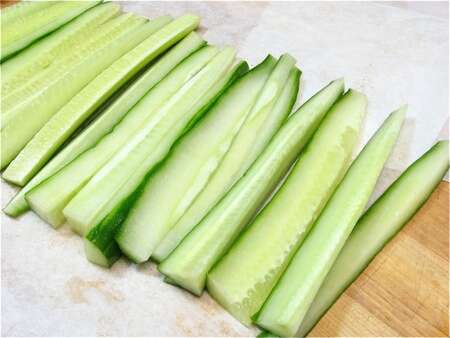 I like to use one of those long English cucumbers for tzatziki; the kind that usually come wrapped in plastic in the produce section at the supermarket. They're not as juicy (cuke juice is your enemy here), and generally less seed-filled. Also, they're not waxed, so no need to peel them.

Dice the cucumber by first cutting it in half lengthwise, then cutting each half into long strips. 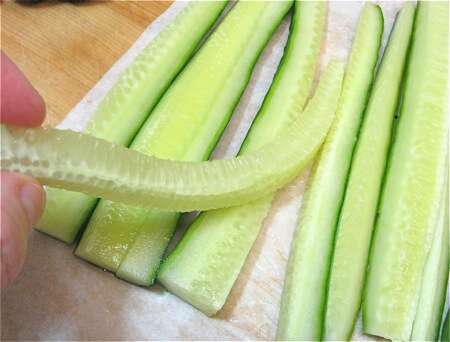 If any of the strips are mainly seeds, slice out the seeds. 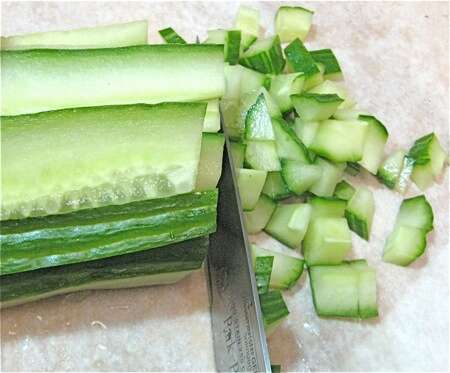 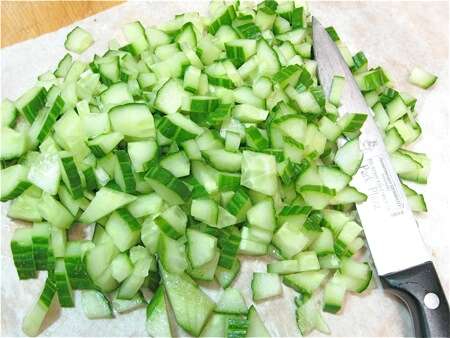 Ah, there we are. 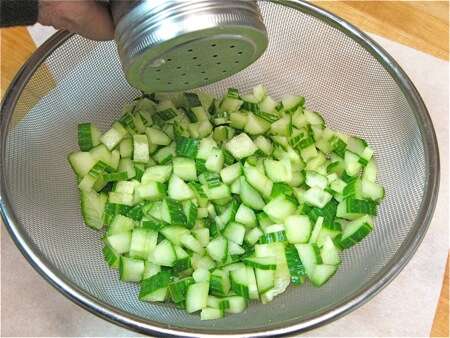 Layer the diced cuke in three layers in a sieve, lightly salting each layer. 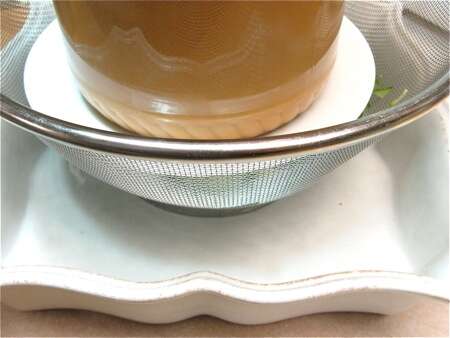 Place a plate or piece of plastic wrap over the cucumbers, and put a weight on top: a heavy bottle, a jar filled with water, or something to press down on the cucumbers. Place the sieve in the sink, or in a bowl to catch liquid. 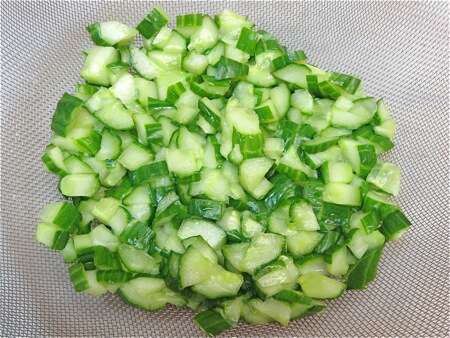 Let the cucumbers sit at room temperature for several hours, till they've given up quite a bit of juice. 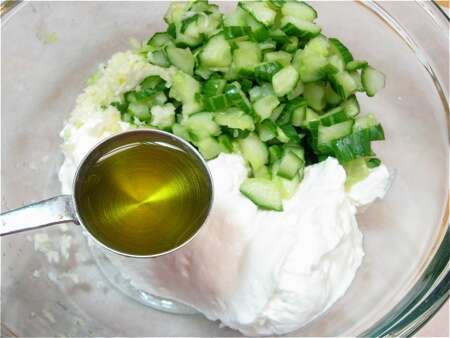 Mix the diced cucumbers with the following:

*Make your own Greek-style yogurt by draining 1 quart (32 ounces) whole-milk or low-fat yogurt in a yogurt cheese maker or cheesecloth for 24 hours. Like this: 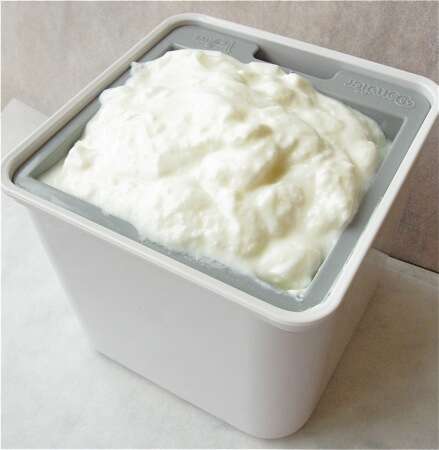 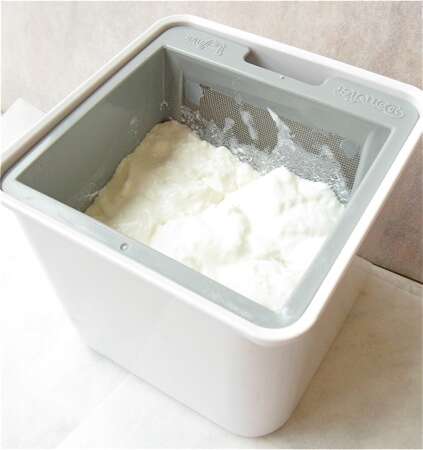 Same yogurt, 24 hours later. Now that is THICK yogurt! And you'd never, ever know it's low-fat, it's so rich-tasting. 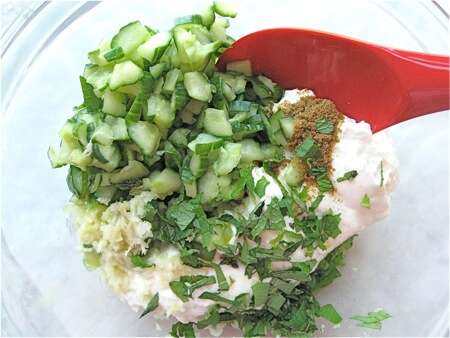 OK, back to the recipe. Stir it all up. While fresh mint isn't always included in tzatziki, I love it. Add about 2 to 3 tablespoons snipped fresh mint, or to taste. 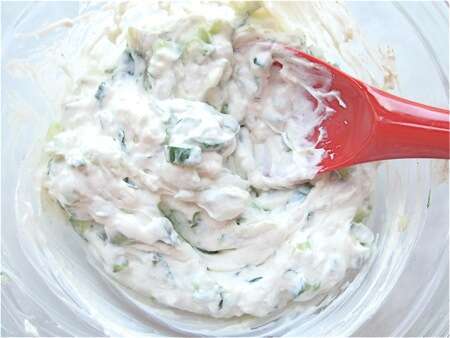 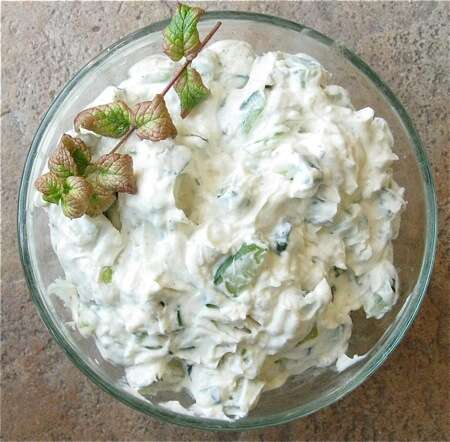 ...and scoop into a bowl. Garnish with a sprig of fresh mint, if desired. 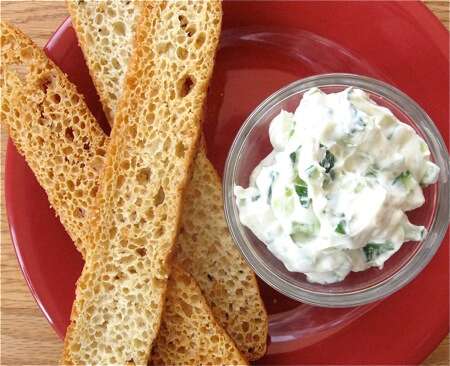 Chill for several hours, for the flavors to meld. Serve with soft bread sticks, pita, bread, or with the crunchy twice-baked focaccia slices shown above. Tzatziki and bread are integral parts of a Greek meze (assortment of small dishes).

For best storage, store right in your Wave yogurt cheese maker. The cucumbers will continue to give up their juice as the tzatziki sits, but the juice will drain right out the bottom of the Wave, keeping your tzatziki nice and thick.

Je vais certainement faire ce tzaziki prochainement, j'en ai l'eau à la bouche rien qu'à le lire. Depuis quelques temps j'achète cette sauce alors qu'il est si facile de la faire, j'ai toujours tout ce qu'il faut sous la main. Ce message me fait rappeler le merveilleux voyage que j'ai fait en Crête avec le pain, les brochettes et le fameux tzakziki, que de bons souvenirs. Thanks Louise Louise, si content nous pourrions rapporter des souvenirs heureux! :) PJH
I've been 'straining' for years - I use non-fat plain yogurt - the multi-purpose condiment!! I, too, use garlic and Greek oregano along with cucumber - can't imagine without garlic. When I use it for baked or grilled salmon, I add capers and finely diced onion and spread on top after cooking. In Detroit's Greektown ('60s & 70s), we used to lunch on (1) tzatziki, (2) Greek bread and (3) wine (Rodytis, Retsina and others!) - ahhhh the good old days!! I enjoy yogurt in many ways - great on baked potatoes with diced scallion greens, too! Best to all -
For Julie T.: Whey can be frozen in ice cube trays, then added to soups or stews in place of part of the liquid or into smoothies or protein shakes as part of the ice. Also can be added to food for farm animals (pigs,etc.) for anyone on a farm. Hope this helps. : ) Andy C.
Have been licking the bowl! I have made thickened yogurt occasionally for years to use for other spreads, this is a great addition. In the past I have used the whey for a partial substitute in the liquid for bread making. As one pint of yogurt yields approx. 1 cup of whey, do you have any other suggestions for use of the whey in baking? I hate to throw it away (awhey?) as it contains good protein. Would appreciate your suggestions. Whey has many uses in baking. Substitute it for liquid in any recipe where you'd like a bit of a tang. You might want to add a pinch of soda to the recipe to help deal with the acid. Here are 2 recipes to get you started. whey pancakes. and whey muffins. Mary @KAF
I made this for book club and everyone loved it. Thanks for helping me add another successful recipe to my collection. It was so much easier to make than I thought.
Hi, it has been quite amusing for me to see how in the West countries this fine dish has been interpreted... It is not as hard as it looks. First and only thing that requires lots of effort is the dicing of the cucumber, which is done by slicing the cucumber into long "Juliens" and then cutting them across into small dices. Before the cutting is done, place a WET cheese cloth on the top of colander, pour in the plain yoghurt and place them over a big bowl where the whey will be drained. This dish varies slightly between a households or villages, but the main ingredients are the same - yoghurt, cucumber and garlic. In the traditional Greek cooking a garlic/walnut pesto (pound the garlic and the walnuts with a pinch of salt till paste) is a must! Not mint, but fresh dill. And vinegar is only suggested if the natural yoghurt could not reach the natural acidity typical for the Balkan or Mediterreanian region. If a housewife has pressed or shredded the cucumber is considered lazy or without cooking common sence, because the little liquid that the cucumber would produce is compensated from the drained yoghurt and the thick garlic and walnut pesto. The texture of the tsatsiki (aka tarator) should be with a crunch from the FINELY diced cucumber, not gummy. The dish has also soothing functions since the yoghurt, the extra virgin olive oil and the fresh dill are well reknown for their magic effect on the digestive system and the stomach. I would highly recommend that this dish be learned from some old lady in one of those beautiful places like Crete, where everything is natural and picked from the garden and the yoghurt is made overnight at home. Nothing healthier and tastier than the natural food! Wish we could all go to Crete to learn, Sophia. Thanks so much for sharing here - it's great to hear about the "real thing" from someone who knows. PJH
Try adding a dash of dried oregano, it really gives that "Greek" touch to the dish.
Sounds fantastic. I LOVE Greek food, but I've never attempted to make this. Now I have no excuse!
I love this -- I haven't made it in years. Thanks for reminding me. I made it along with tandori bread -- which I "baked" on the grill. And along a chop salad of tomatoes, leftover brisket, feta and olives (from the olive bar in the market). Perfect for a day like today-- the air is out- it's 90 degrees and just as much humidity. Very cooling.
Great recipe, thanks for sharing it. Joyce.