Maine wheat? A vision of the future.

One grain at a time

When Tod Bramble, director of bakery and foodservice sales for King Arthur Flour, told me he was interested in having us sponsor a grain growing and baking conference in Skowhegan, Maine, I returned a blank stare followed by, “What?”

Didn't he know I had just posted a blog about our fantastic visit to the wheat fields of Kansas, highlighting the terrific quality of the grain grown there and showing how our consistent flour was dependent upon Midwest grain?  I thought, won't people be confused by this apparent contradiction?

Then I met with the event's organizers one beautiful, unseasonably warm March day in Portland, Maine. And it all made sense. 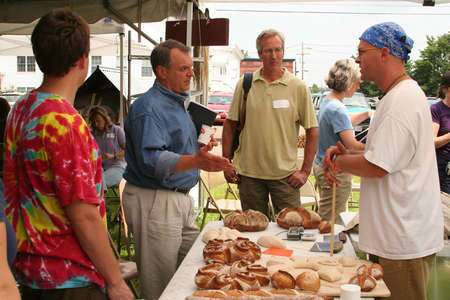 The Kneading Conference, now in its fourth year, grew out of the local food movement when a group of millers, oven builders, and bakers in Maine realized they had to address wheat production if they wanted truly local bread produced in their communities.  “Local” up until that point had really meant “locally baked” or maybe even baked from “locally milled” wheat – but the wheat itself was still coming from elsewhere.

For King Arthur Flour, “local” flour has meant milled from U.S.-grown wheat. When you're talking about a product that's only grown in certain parts of the country, keeping it local has meant keeping it domestic.

Of course wheat isn't only grown in certain parts of the country – it's grown in a great diversity of locales. Yet for King Arthur Flour, only grain of a certain specification can be milled to produce our flour.

As I've written before and you undoubtedly know from using our products, we're very picky about the grain. And the grain-growing regions outside the Midwest simply don't have enough to supply the vast amounts we need. So King Arthur Flour grain is currently only grown in certain parts of the country. Can we, KAF, really someday make flour from grain grown on the plains of Maine? 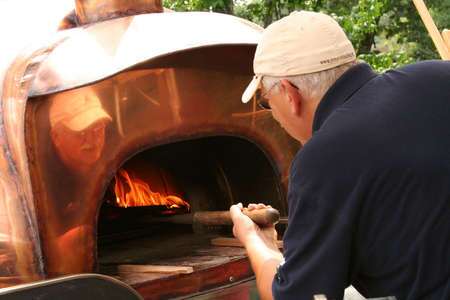 Maybe. Or, rather, we better hope so. It's simply a matter of food security. You already know about the dangers of putting all your eggs in one basket, or in this case putting all your grain in one bread basket. If something should happen to debilitate or destroy the wheat harvest in the Midwest and there's no substantial alternative wheat production possible elsewhere, we could be in for trouble. That's one possibly alarmist view of the situation. 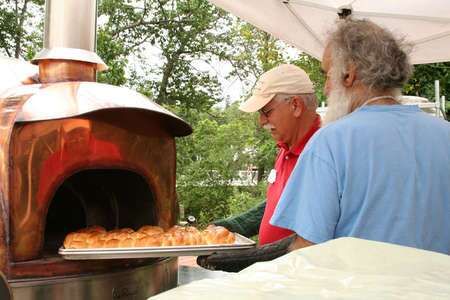 The other perspective is simply that some people want to consume food that's produced nearby to lower the environmental impact of food production and consumption, and to increase the diversity of agriculture in their regions.

A century and a half ago, most small farms across New England were growing grain for human consumption. There were more than 10,000 mills in northern New England producing flour, from locally adapted, now endangered or extinct wheat varieties. That was before the railroads opened up the Midwest and West, where conditions were more favorable for massive wheat cultivation. Wheat production in other regions of the country withered, too, as the Midwest became the dominant grain-producing area. 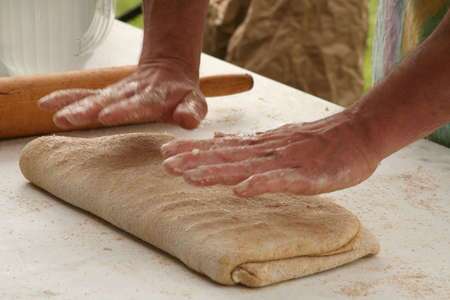 The Kneading Conference in Maine hopes to not only revive and improve upon wheat varieties that succeed in Maine's climate, but to revive overall the practice of crafting bread locally, from seed to loaf. At King Arthur, we think that's pretty cool. 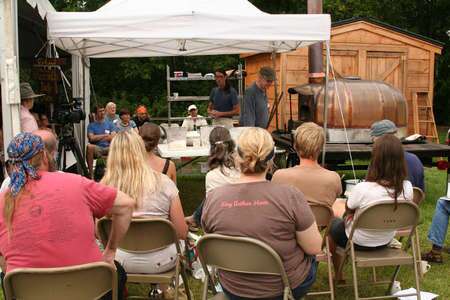 So it begins with baby steps. We're giving our support to the movement to build a knowledge base among practitioners (those millers, oven builders, growers and bakers I mentioned) so that one day soon Maine – and perhaps other locales around the country – will boast a thriving, sustainable wheat supply.

That begs the question, would a bag of King Arthur Flour from Maine wheat really be an advantage in, say, Arizona? Or even South Carolina? Probably not. At least not from the point of view of the local food movement. 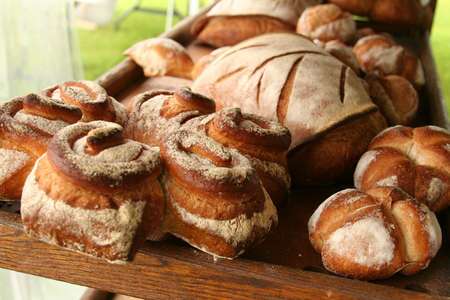 But what if the people who lived within a few hundred miles of the Maine-grown wheat could buy the flour in their local co-op food store? And what if there were regional varieties of King Arthur Flour available all over the country? A marketer can dream... 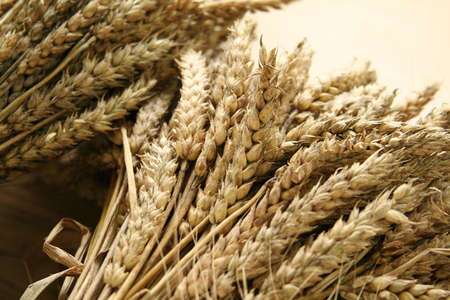 Of course it all depends on whether locally grown wheat – wherever “local” is – can meet the quality standards necessary to bear the name King Arthur Flour. Right now to make King Arthur Flour from Maine wheat (or Carolina wheat, or Arizona wheat), we would have to compromise quality for the sake of producing a regional flour. With our support we hope The Kneading Conference helps Maine reach a critical mass of growers and bakers – and technical expertise – so that someday soon Maine will be a steady source of high-quality wheat, the best of which will find its way into a bag of King Arthur Flour. 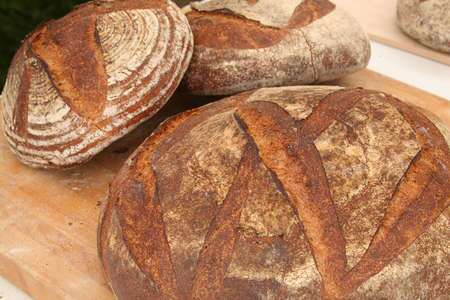 And, at the end of the day, into your homemade bread.

To read more stories about our wheat sourcing, see our post, Identity-preserved wheat.

Tom Payne is the Director of Marketing for the King Arthur Flour Company, Norwich, VT. Tom has nearly 10 years experience marketing in the baking industry and several years working as a baker himself.

View all posts by Tom Payne

Have there been any updates to fostering local communities for growing and milling local grain? Would love to hear an update about this movement in Maine and throughout the country.
Absolutely, Anna! The Kneading Conference mentioned in this blog post is still going strong, and you can learn all about the work they're doing to promote Maine wheat at their website: http://kneadingconference.com/. Happy baking! Kat@KAF
People follow different methods to grow wheat plant depending on its purpose and uses. Although, it is consumed as a food material, but it is now been popularly grown to extract wheatgrass juice as well.
I am very excited about the work you are doing locally! I am also very interested in the old strains of wheat. My understanding is that they contain much less gluten than the current standard wheat. It would be spectactular to have a nationally know chain do a little research and development in this area so that G/F foodies like me might be able to use a gluten-light "regular" flour. Thank you for all you do! Thanks for the encouragement Karen. Happy baking and good health to you from us. ~ MaryJane
This is exciting (says a girl in Maine)! I am reading lately some theories that the massive increase in celiac disease could be related to use of wheat bred from the 1960's or so onward that was intended to have a much higher yield, therefore helping to aleviate world hunger. It was somehow crossed with dwarf strains and I don't know all the details, but anyway -- it's got more chromosomes than older wheat did. It potentially aggrivates diabetes, celiac, and a variety of other symptoms. Who knows how much is alarmist and how much is true, BUT it seems a good idea to grow a variety of types of ANY crop so you have options should a blight come. And growing crops locally is wise for the same reason. I'd be all in favor of locally grown, heirloom wheat flour! In the meantime, I'll use KAF whenever I can. Since from here, Vermont is practically local compared to other mills, and at least it can be milled 'close' to home. (: Thanks for sharing about what you've been reading. You're right, it is very hard to know what is proven science and what is media-hyped. You sound like you are definitely doing the right thing by reading, reading, reading and getting educated on what is going on. Keep up the good work! ~ MaryJane
I am so excited to hear that KAF may get it's wheat from Maine. I always try to buy products from New England to support my local economys. I hope this is a great success for all parties involved.
Looking at the photos made me hungry! Not an uncommon reaction, Lauren... :) PJH
Those breads look absolutely good! Yumyum!
There's some good local wheat stuff going on in the Upper Valley too. A guy in Windsor is starting to mill for local growers.
This conference promotes whole grains, home baking, local foods, and community. I would love to see KAF moving more in this direction. KAF has a large following, and can be a leader in education about these issues. I was thinking lately that KAF had gotten away from promoting whole grains, but maybe this conference proves otherwise.

From field to flour